Grays major classic car and bike auction closes tomorrow, 23 February, so there’s still a chance to bid on all the vehicles consigned, including this ‘barn find’ Walkinshaw Commodore. 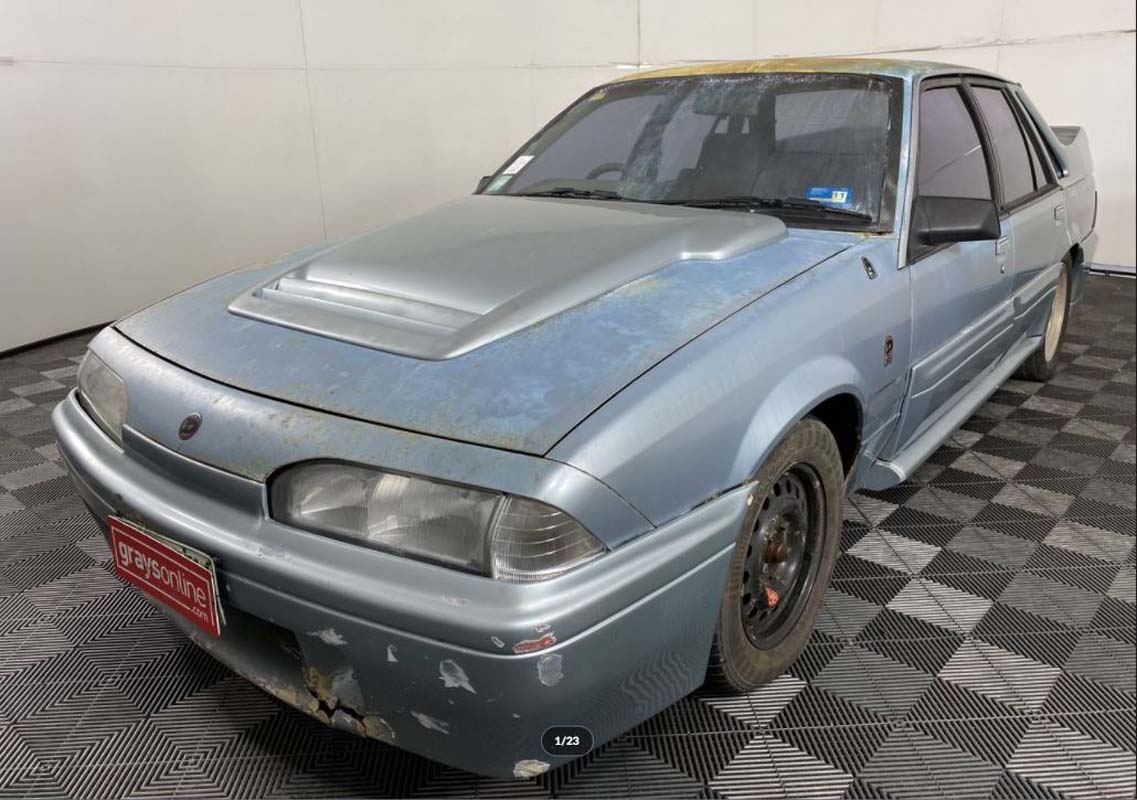 One of Australia’s most outstanding – and to some, outrageous – vehicles when new, the VL Commodore-based SS Group A SV homologation special was the first product of the Holden Special Vehicles (HSV) operation born out of the ashes of HDT.

As HSV was co-founded and run by Tom Walkinshaw, the first HSV vehicle soon became known as the ‘Walkinshaw Commodore,’ later shortened to ‘Walky’.

A total of 500 units were produced initially, all finished in the same ‘Panorama Silver’ paint with an extensive body kit designed to improve the aerodynamic efficiency of the racing Commodore.

The bonnet scoop and massive spoiler on the boot lid were the standout features of the comprehensive body kit, but there was more to the Walkinshaw than just plastic add-ons.

Under the bonnet, a 5.0-litre V8 was standard, fitted with electronic fuel injection and number of other race-specific parts. Tuned to deliver 180kW and 380Nm, the engine was also designed to withstand the rigours of racing, and particularly the sort of high-stress conditions encountered at Bathurst.

The V8 was matched to a Borg Warner T56 five-speed manual gearbox, with performance suspension, performance brakes and 16x7-inch alloys also part of the VL SS Group A SV package.

While the Walkinshaw had its critics when it was released in March, 1988 (mainly due to its styling), the 500 units required for homologation sold quickly, leading Holden to commission a further 250. These proved much harder to shift, though, with reports of unsold units sitting on dealer lots for months or years after release and some even being converted back to more conventional VL Commodore appearance by dealers desperate to get them out the door.

The barn-find Walky consigned with Grays is from that second batch, #619 to be specific, and is described as being delivered new to Queensland.

Its subsequent history is unknown, but it had been sitting in a NSW shed for years before it was consigned for this auction.

As consigned, the car shows serious rust in certain areas, but all the Walkinshaw-specific aero parts are in place, albeit needing repair. Same goes for the interior – all seems to be in place, but a full restoration would be required.

There’s one non-standard steel wheel fitted (although a genuine spare is in the boot), the engine is described as not running and carries non-standard braided lines with anodized connectors. The odometer shows 175,801kms and logbooks are available.

In recently as ten years ago, Walkinshaw values were hovering around the $60-70,000 mark for outstanding examples but are now regularly pulling over six figures. The benchmark for a Walkinshaw at auction was achieved by an ultra-low mileage (1,308km) example that was auctioned for $340,000 in 2018.

Reflecting this rise in value, bidding on this VL SS Group A SV #619 was sitting at $121,000 at time of writing, despite the car requiring a full restoration.

To see the auction listing for this vehicle, click HERE.

To view other lots from this auction, go to: grays.com