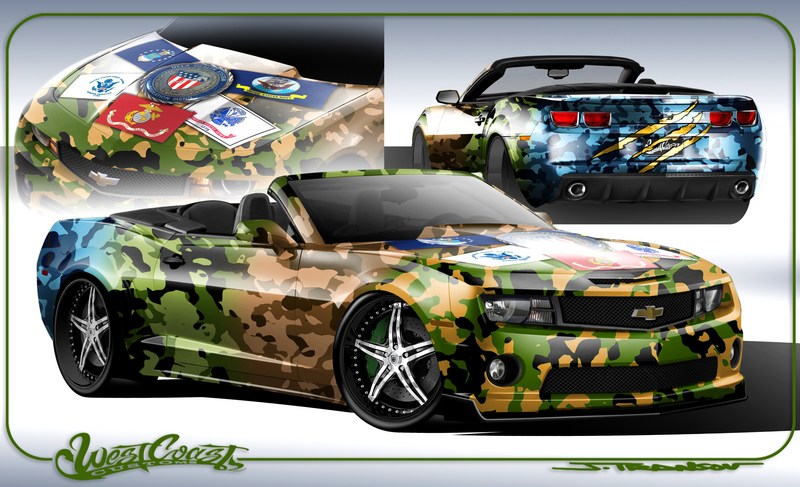 A partnership between the Ronald Reagan UCLA Medical Center, Brooke Army Medical Center in San Antonio, Texas, and the Veterans Administration-Greater Los Angeles Healthcare System, Operation Mend was established to help treat U.S. military personnel ...
A one-off 2011 Chev Camaro will be auctioned for charity in the US this October, with all funds raised going to 'Operation Mend', a charity supporting severely wounded US military personnel.

The idea to create a special one-off car in support of Operation Mend, and then auction it to raise money for the charity, came about when Dana Mecum, president of The Mecum Auction Company, and Ryan Friedlinghaus, founder and CEO of West Coast Customs®, joined forces. Friedlinghaus, who has transformed cars for celebrities and corporations, will customize the Camaro with a blend of camouflage colors.

The car will make its debut at the Mecum Dallas Auction, October 6-8, at the Dallas Convention Center in Texas. The team at Mecum Auctions will sell the Camaro at no reserve on Friday, October 7.
"Having the opportunity to create and auction a one-off custom Camaro to benefit Operation Mend is an honor for me and the entire West Coast Customs team," Friedlinghaus said.
"Having met patients, families, doctors and volunteers really helped provide inspiration for this build. We have the opportunity to honor the men and women who have dedicated themselves to protect our freedoms, which is a privilege for me."

The Camaro's journey from stock to custom will be documented on 'Inside West Coast Customs' on US cable TV, while the vehicle's sale will be featured live on 'Mecum Auto Auction: Muscle Cars & More'.
"Our company is honored to sell this custom Camaro to benefit Operation Mend, and we are grateful that we can do our part to help the brave men and women who have sacrificed themselves to protect our country and our families here at home," said President Dana Mecum.

All proceeds from the sale of the custom Camaro will be donated to Operation Mend, with the new owner given the opportunity to drive the Camaro as the lead Grand Marshal Car at the Veteran's Day Parade in New York City on November 11.