After making headlines around Australia last year when it emerged from a Queensland farm and sold at auction for over $300,000, the ‘Chicken Coupe’ 1973 XA Falcon GT hardtop is now being restored.

Gaining its nickname for the decades it spent in a shed fronted by chicken wire, the Chicken Coupe was no ordinary Falcon GT. For starters, it was RPO 83 equipped, meaning it carried performance parts originally intended for Ford’s abandoned GT-HO Phase IV programme, like extractors and a 780cfm Holley carburettor. This was on top of the standard GT gear that included a 351 Cleveland V8, Toploader four-speed manual gearbox and 9-inch diff. 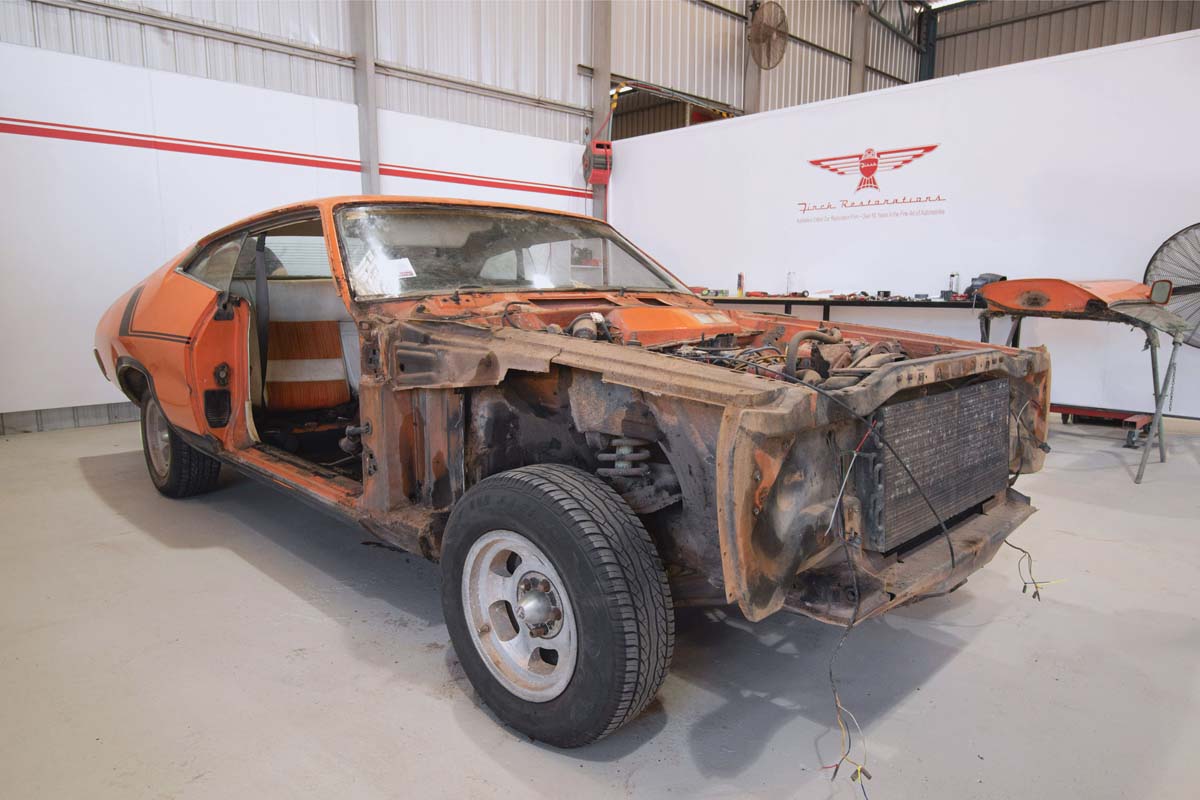 This car was also heavily optioned from the factory, fitted with electric windows, power steering, intermittent wipers and tinted windows, while mag wheels, body stripes and orange fabric inserts on the white vinyl seats were added at the dealership.

Finally, the Chicken Coupe is one of only three XA GT hardtops (and one of only two RPO 83 hardtops) painted in ‘MacRobertson’s Old Gold’.

The first, and until recently, the only private owner of the car, ‘Gordon,’ purchased it in 1973 as a low mileage demonstrator from Metro Ford in the Brisbane suburb Spring Hill. It served as his wedding car a year later and was driven regularly until 1988, when rising fuel costs and excessive insurance premiums led him to take it off the road and store it in a shed where it stayed for the next 32 years.

Following Gordon’s passing in 2019, his family consigned the car for auction in July, 2020, with Grays. Despite obvious rust and accident damage, the ‘barn find’ XA Flacon GT hardtop attracted fevered bidding at the Grays online auction, ultimately selling for $300,909.

The winning bidder, an anonymous enthusiast in South Australia, faced the decision to preserve or restore the car. Recently, that decision was revealed when Finch Restorations announced they had been commissioned by the new owner to undertake a full restoration of the rare car.

Finch gets the Gig

Established in 1965, Finch Restorations have a long history in repair, restoration and servicing of not only classic, but also vintage- and veteran-era vehicles. Cars restored by the Adelaide Hills business have gone on to win trophies and feature at some of the world’s major classic car events, including the Goodwood Revival and Pebble Beach Concours d’Elegance.

As well as restorations, Finch Restorations also build recreations of iconic classics like the Ferrari 250 GTO and SS Jaguar 100.

Molly Spalding, project manager on the restoration of the Chicken Coupe, says that the XA’s owner chose Finch Restorations based on his awareness of the quality of the company’s work. This admiration increased when he visited the Mount Barker facility to examine Finch’s restoration processes, view current projects and discuss the Chicken Coupe project in detail.

When the Chicken Coupe arrived at Finch Restorations earlier this year, it was still covered in dust and hiding what was later found to be the remains of a considerable rat infestation, with Molly adding the car had a very strong aroma due to the latter!

The first job for the Finch team was to confirm the car’s ID and take a detailed look - inside, outside and underneath - before a thorough clean of the exterior.

That clean made the car look better than it actually is, but Molly explained that a detailed examination showed considerable rust in the boot, roof gutters, A-pillars and leading edge of the bonnet.

At time of writing, disassembly of the Chicken Coupe had commenced, after which the body will be stripped to bare metal, giving the Finch team a more accurate picture of exactly how much body repair and replacement metal will be required.

While no specific timeframe has been set for the restoration, and the owner is in no rush, Molly expects Finch to make good progress on the car in the coming months as they return it to as-new condition.

JUST CARS will keep you posted on this project as it progresses, so watch this space for updates.