Despite COVID-19 restrictions, restoration of the famous 1973 Ford XA Falcon GT hardtop dubbed the ‘Chicken Coupe’ has been progressing well in recent months, with Finch Restorations completing stripping of the car down to its shell and commencing panel repair and mechanical refurbishment. 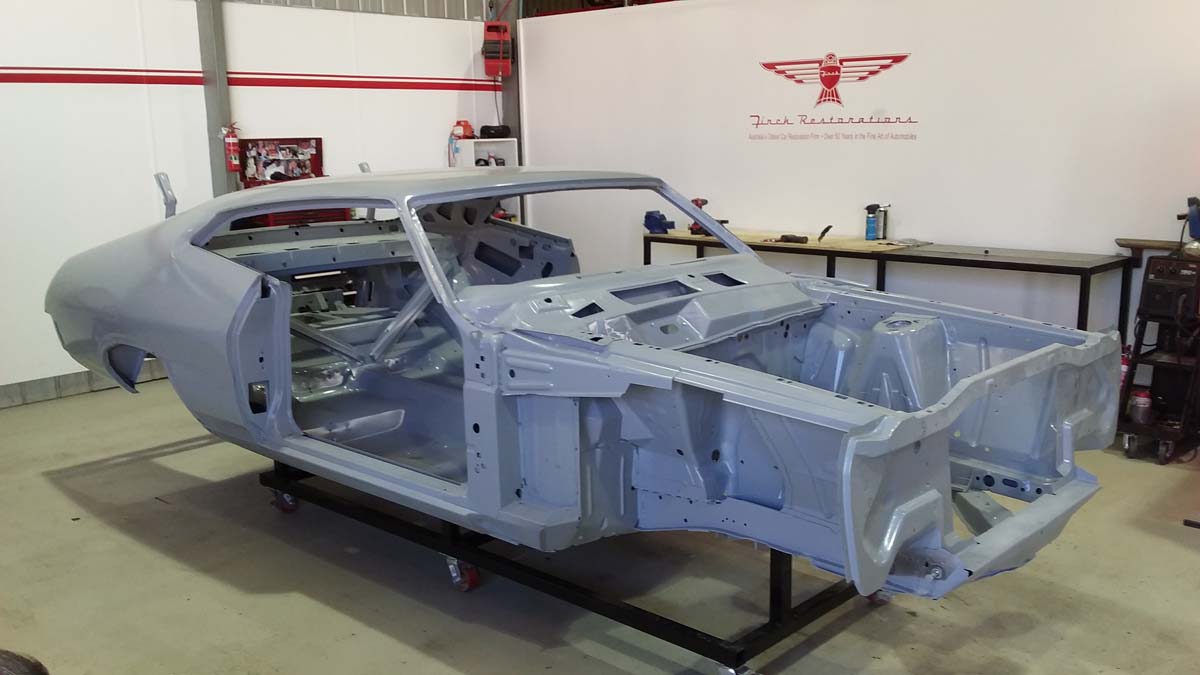 Australia’s oldest car restoration business, Finch Restorations was entrusted with the restoration of the GT hardtop by its new owner, who purchased it at a Grays auction in 2020 for just over $300,000. 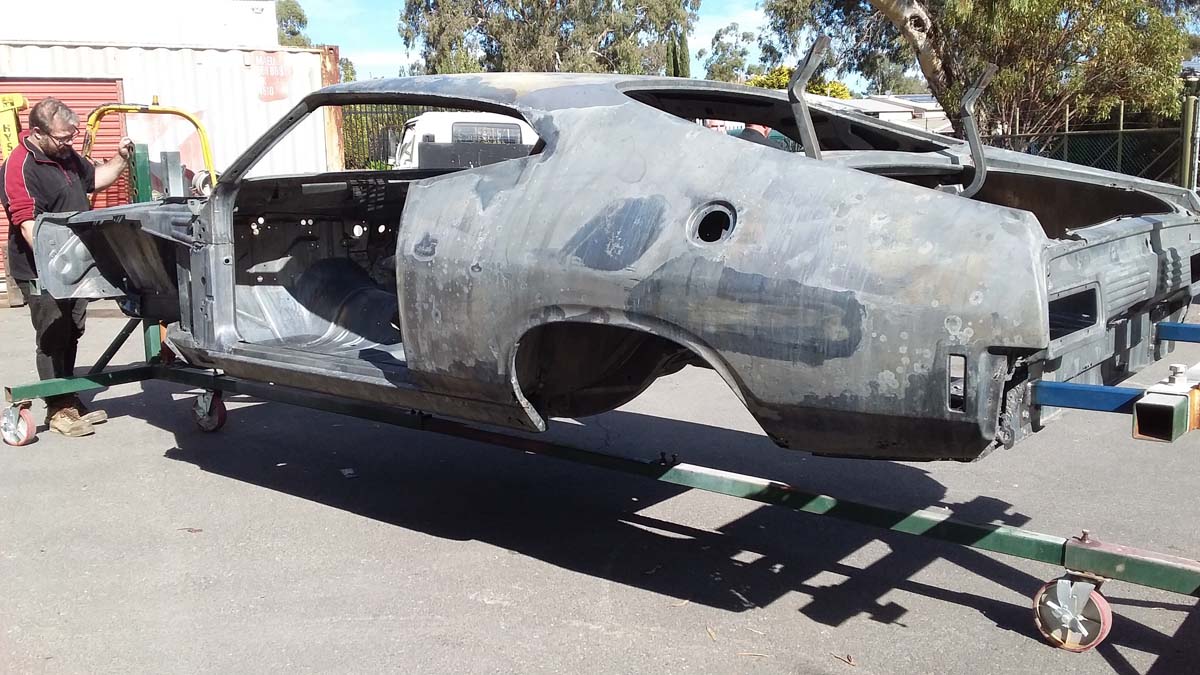 As previously reported by JUST CARS, after the Chicken Coupe arrived at Finch Restorations’ Adelaide Hills premises, the first phase of the restoration, under the guidance of project manager Molly Spalding, involved checking VIN and ID info as part of a forensic examination. 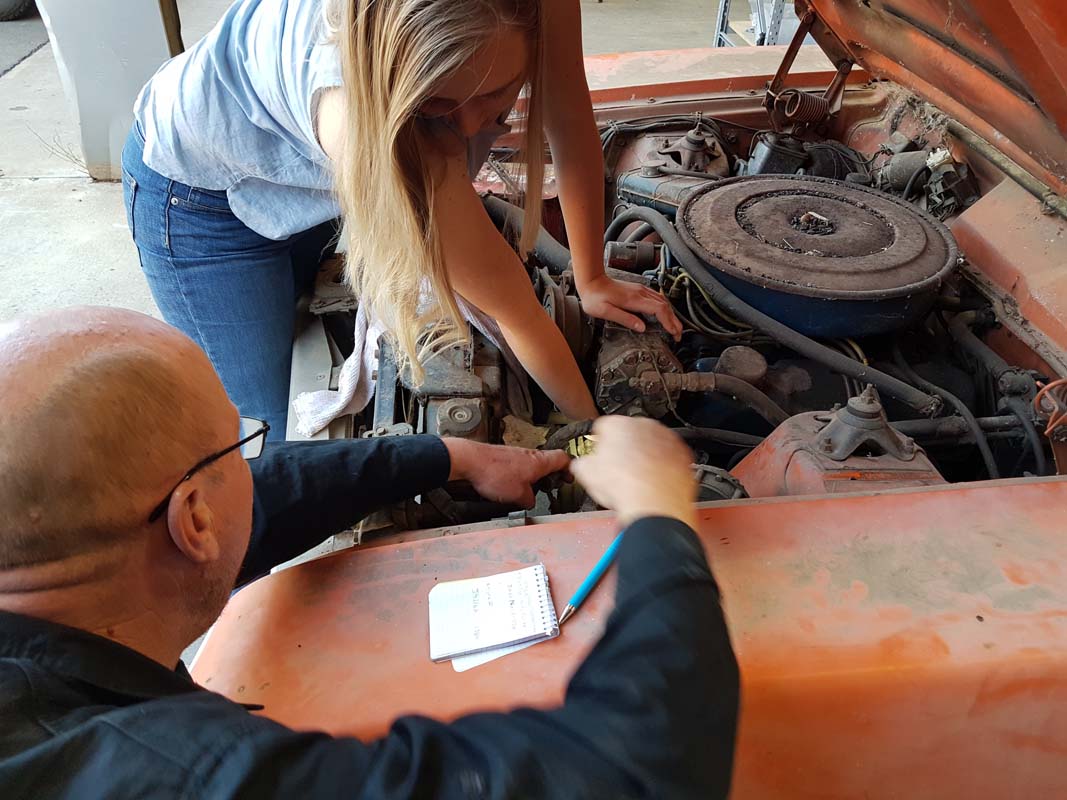 After that, the Chicken Coupe was give a thorough clean inside and out, which was absolutely needed, as the car was covered in dust and had been a home to rats for decades.

“The mess that we took out of that car filled four domestic rubbish bins,” Molly explained. “And the smell meant than we went through many cans of Glen 20!” 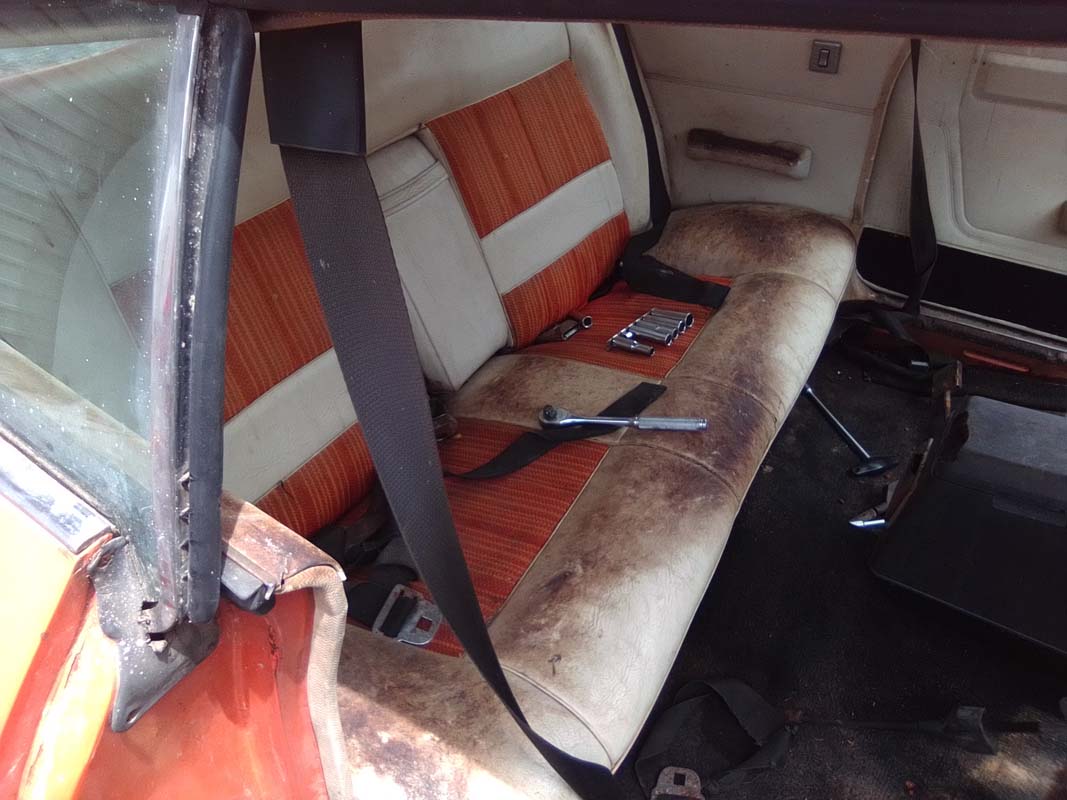 After formulating a build plan for the restoration, Finch Restorations commenced documenting every element the car before starting disassembly: “To date, the team have already amassed 3,500 photos of the car’s details, mostly taken before and during taking the car apart,” Molly added.

The disassembly process was also captured on timelapse video (which can be viewed on the Finch Restorations Facebook page).

After completely disassembling the car, all components were catalogued in a process that includes the restoration’s team’s assessment of each component, while storage racks for components are allocated to each vehicle, so there’s no mixing of parts from other projects.

Finch Restorations say that, while the disassembly and cataloguing process is laborious and time-consuming, it also ensures that when parts are needed, they can be easily located. 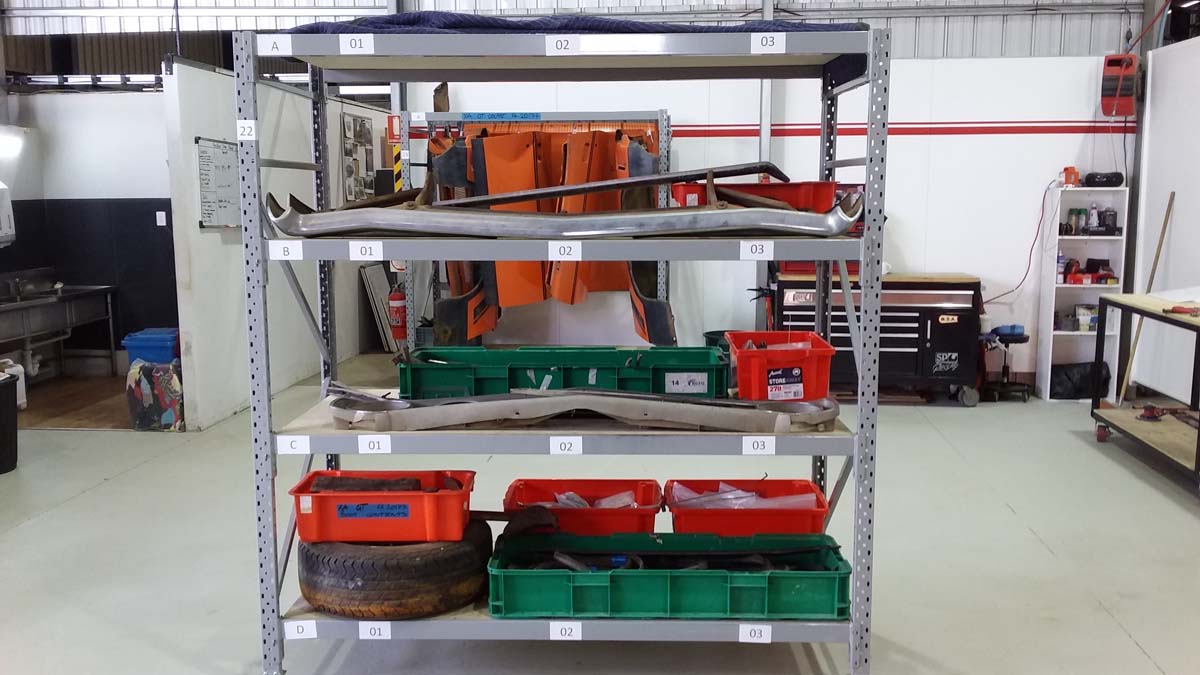 Various ancillary research activities were also undertaken by the team during the disassembly process, including spectrophotometer analysis of the original paint colours and measurements of the dealer-applied decals.

Back to its Bones

With the Chicken Coupe stripped to its bodyshell, Finch Restorations were presented with the first real opportunity to access the extent of rust in the car.

By this stage, the coupe’s bodyshell had also been mounted on one of Finch’s dollies for transport.

Whereas significant rust was expected at the front-end, which had the greatest exposure to the weather in the open-fronted Queensland shed, the Finch team found more significant and damaging rust beneath the seats and in the boot area, caused by uric acid from the rats’ faeces.

While Finch Restorations do paint, panel, fabrication, metal coachwork, timber coachwork, motor trimming and mechanical refurbishment on site, some elements are outsourced, so the shell and loose panels were sent off for chemical dipping to remove paint, rust and filler.

Upon return to the Finch workshops, the bare metal bodyshell was transferred to a rotisserie and Finch’s gun painter, Mark, lightly blasted the shell to remove any residue from the dipping process and also ensure a good keying surface for the two-pack epoxy primer, which was applied without delay.

“Speedy application of a primer is critical to avoid flash-rusting from moisture in the air,” Mark explained. “To achieve a great and long-lasting paint system, you have to get the foundations right first.”

Prepping and priming of the shell and panels was completed by August, so Finch’s restoration efforts have recently turned to the bodywork, which along with the aforementioned rust, had substantial dents in certain areas, especially down the drivers’ side. 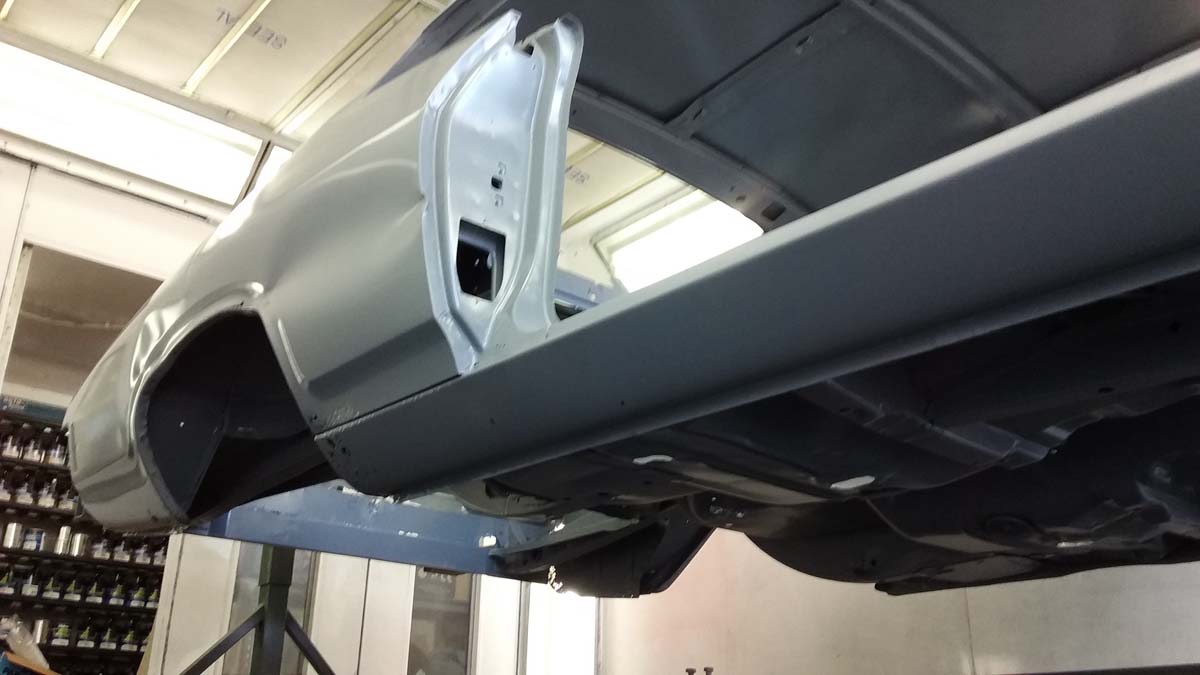 Replacement metal sections around the A-pillar and base of the windscreen have already been fabricated and fitted, with many more to come.

Finch’s engine-builder has started refurbishing the GT’s driveline, while the mechanical and auto-electrical team have been working on other major systems.

More recently, Finch’s motor trimmer has begun researching replacement fabrics for the Chicken Coupe’s interior, including the headlining, seat trim and carpeting, which suffered due to the rat infestation. 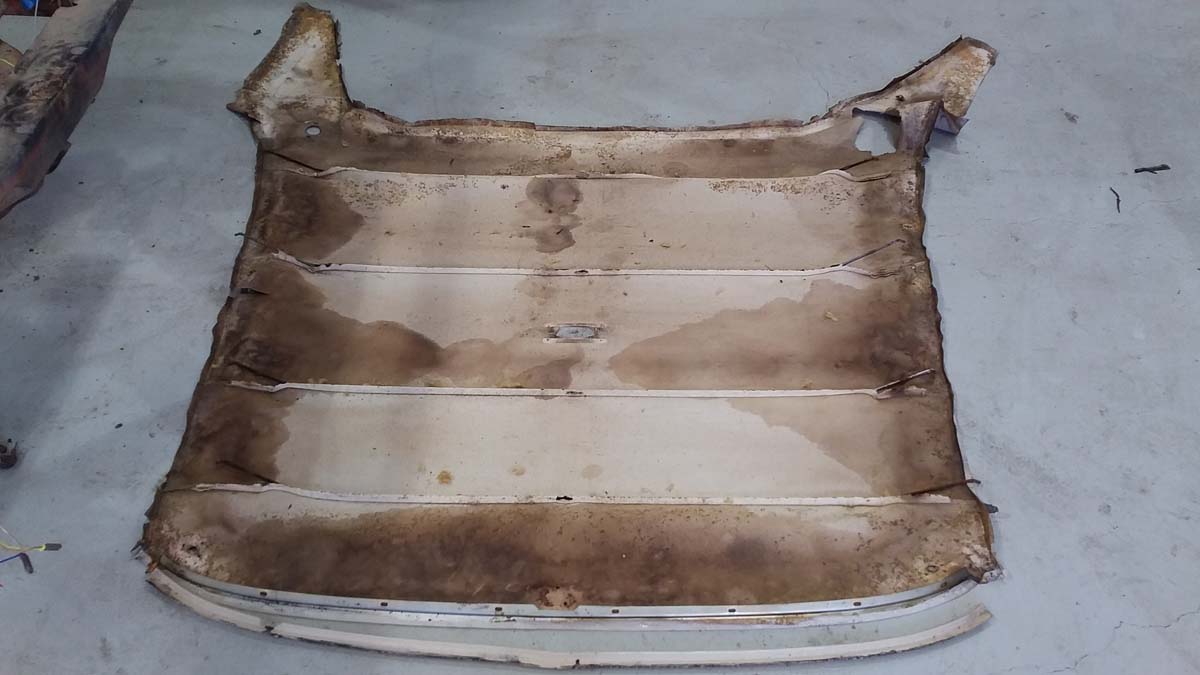 While no specific completion date has been set for the Chicken Coupe’s restoration, the work completed by Finch Restorations so far should see the car return to the road sometime in 2022 or 2023.

Watch this space for more updates on this restoration as it progresses.