This classic Chevy pickup has been transformed from workhorse to showpony!

In the history of Chevy pickup trucks, the chapter on the 1955 ‘First Series’ models is intriguing – and short!

These trucks, like the one pictured, were only on the market for a few months, then replaced by all-new models. In US pickup terms, that makes them relatively rare, so when you get a chance to look one over, it’s worth taking the time to do so. 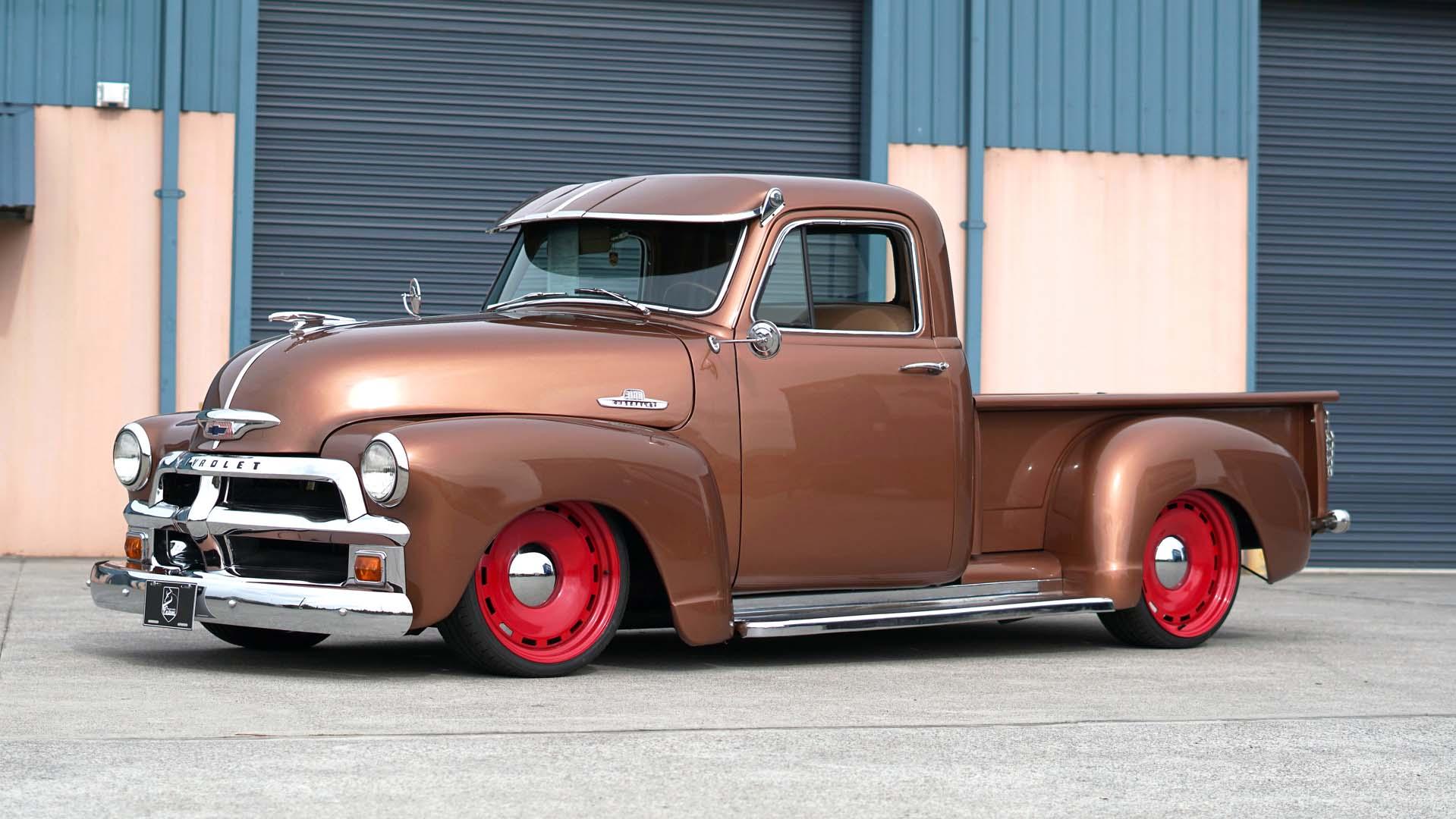 To put the ’55 First Series Chevys in context, you have to go back to 1947. That’s when Chevrolet introduced their new ‘Advance Design’’ truck range. These were Chevy’s first all-new truck designs since 1941, and they actually beat main rivals Ford and Dodge to market by a year. But, in a forecast of what would happen eight years later, a number of trucks in the old design were built and plated as 1947 models, no doubt confusing the hell out of enthusiasts when trying to verify a truck whose appearance and ID panels don’t match!

That aside, the Advance Design range ran the full gamut of commercial vehicles that the North American market demanded back then. The 1/2-ton, 3/4-ton and 1-ton pickups led the way, with larger 1 1/2-ton and 2-ton tray and cab-chassis models also available. All featured the same styling from the cab forward, although the larger pair had proportionally larger cabs than those on the pickups. Differences between the volume selling trio of pickups came down to cargo bed length (6-foot and 9-foot were the norm), suspension rating and a few other details. 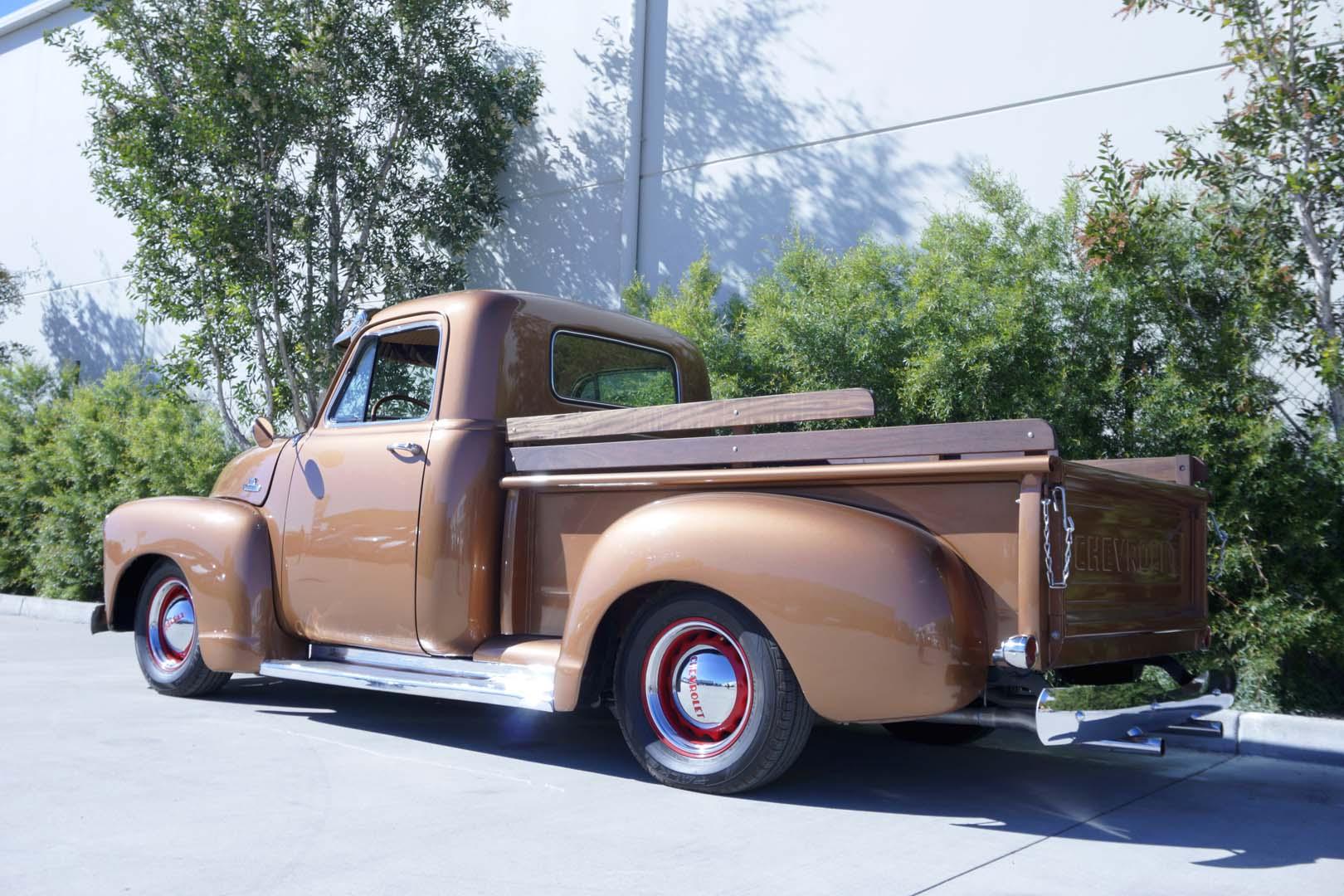 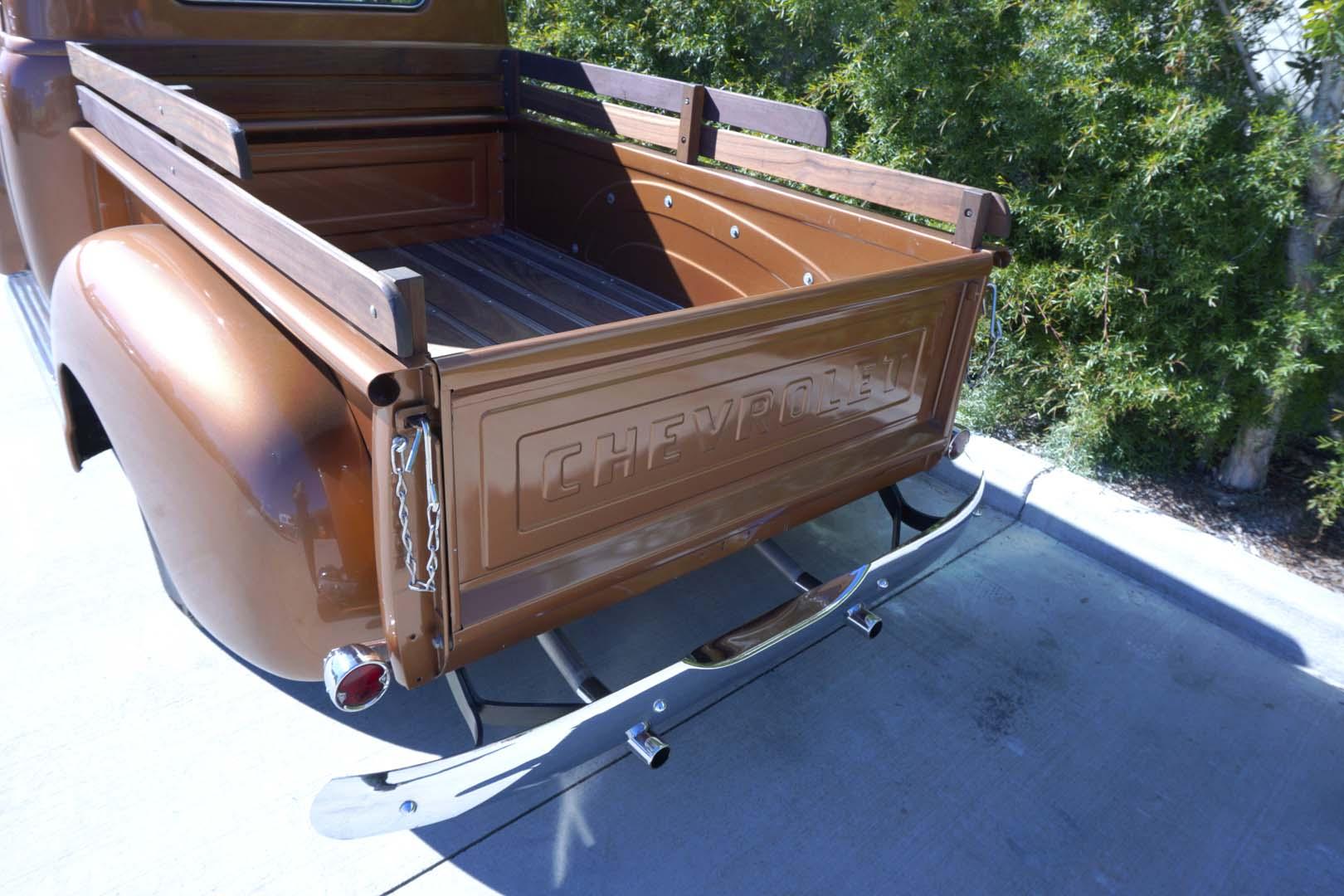 Panel trucks with the same styling were also offered, in 1/2-ton and 1-ton ratings, but specialty requirements, like tandem rear axles, four-wheel drive and special-use bodies were still the domain of the aftermarket at this stage.

Fast forward to 1953 and Advance Design hadn’t actually advanced that much. At first glance, a ’53 pickup looks identical to one from six years earlier. A few factors contributed to this. Firstly, Chevrolet were leading the overall truck market at the time, so there was an ‘If it ain’t broke. . .’ attitude within Chevrolet. Secondly, there had been production restrictions imposed on all light trucks during the Korean War, so it didn’t make sense to develop an all-new model if you were limited in the number you could build and sell to the civilian market.

When those government restrictions were lifted in early 1953, it was too late to change the 1953 model-year range, but development surged ahead for the upcoming years. And this is where it gets a bit intriguing. 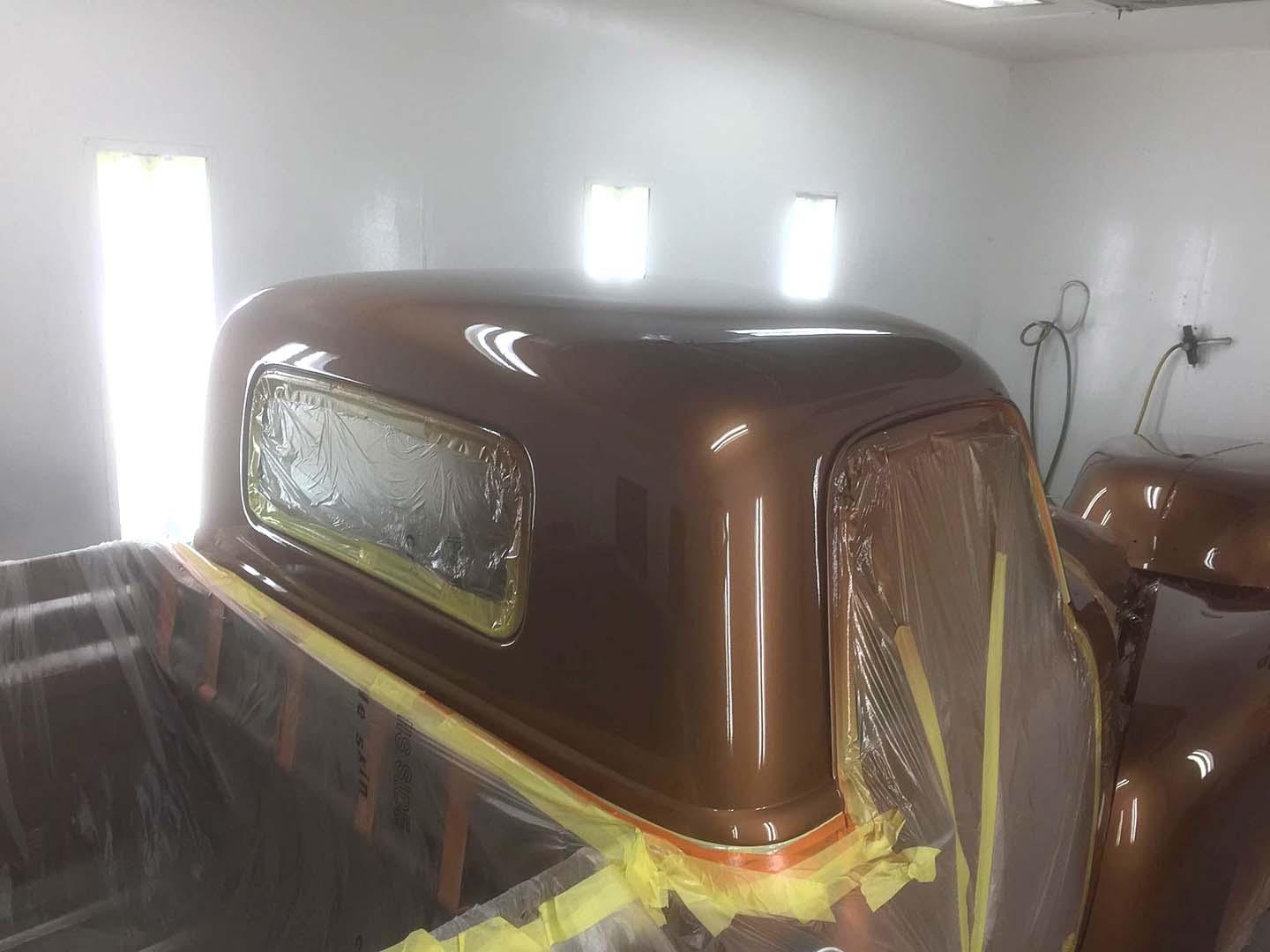 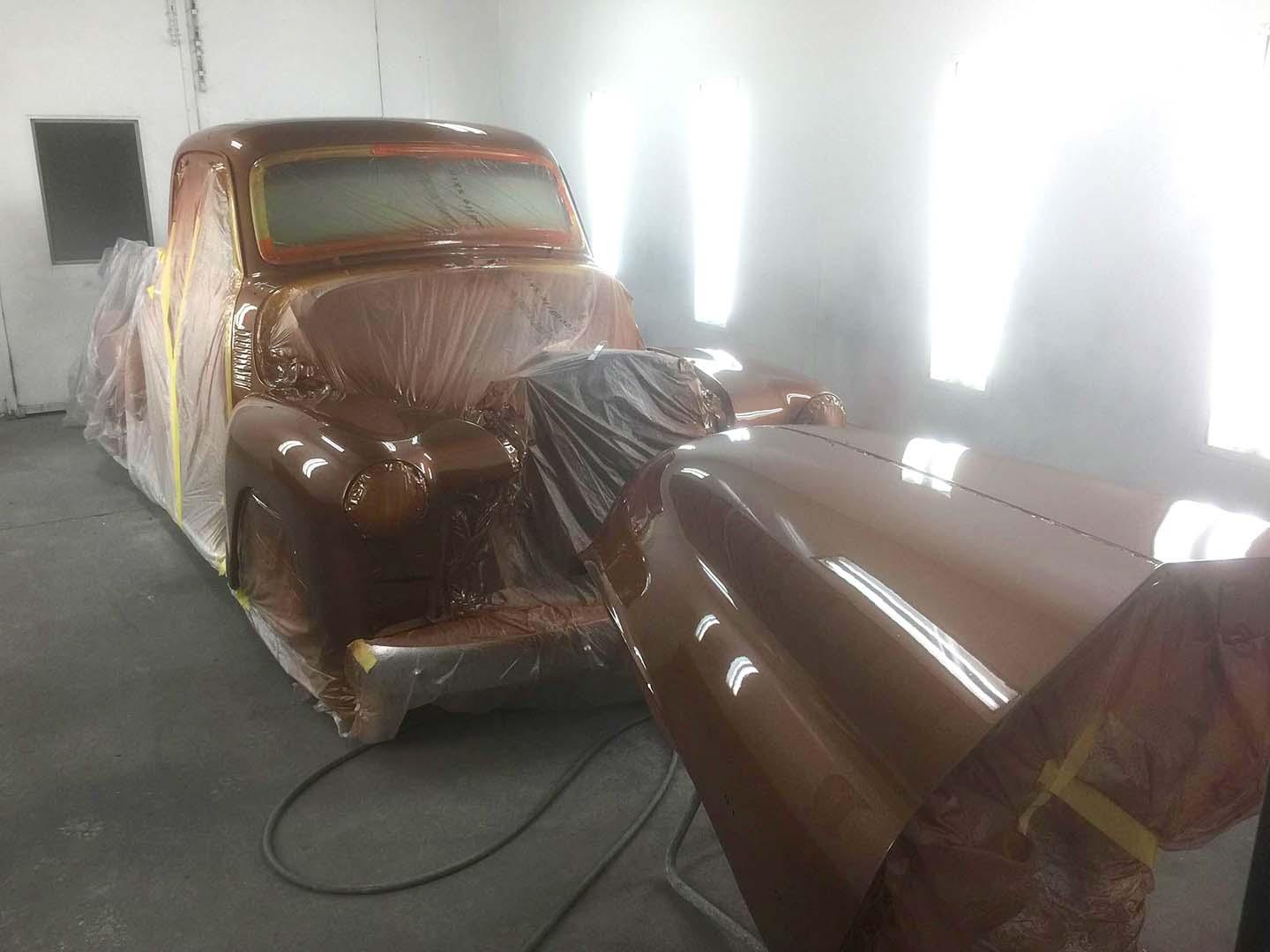 Chevrolet’s light- and medium-duty truck range for 1954 was introduced in December of 1953. The Advance Design bodies carried over, but they’d been given a fresh new face. In place of the grille treatment that featured five horizontal bars, there was now a chunkier trio of bars. The middle bar stretched almost the full width of the front end, while the upper and lower bars curved around to meet it. An equally thick vertical bar divided the grille to create a cross-bar opening.

New-look badging and identification – including CHEVROLET spelled out on the upper grille bar - were standard, but of more importance to the actual users of these trucks were new features like the one-piece windscreen, lower load bed with a ‘grain-tight’ tailgate that prevented spillage, redesigned instrumentation and glovebox, redesigned steering wheel and upgrade of all the 1/2-ton, 3/4-ton and 1-ton and 1 1/2-ton models to the ‘Thriftmaster’ 235-cubic inch engine.

Also new for ’54 was an automatic transmission option for 1/2-ton, 3/4-ton and 1-ton models, while the standard three-speed manual was upgraded to make it more durable.

In February, 1954, a Deluxe cab option was introduced that featured additional windows cut into the rear corners of the cab, stainless steel window surrounds, a cigarette lighter, two-tone paint options for the interior and such “luxuries” as a driver’s door armrest and sunvisor for the passenger.

Granted, the cabins and bodies on the ’54 truck range were the same as previous years, but Chevrolet had obviously invested a lot in the upgrades, so why they changed them again soon after, this time much more comprehensively, remains a mystery.

The change was part of a much broader push at Chevrolet to introduce new models company-wide for 1955. Factories were being expanded, too, and legend has it that Chevy’s commercial vehicle plants simply weren’t ready to manufacture the all-new model trucks alongside the new passenger car range that hit the market in late-1954. So, the carryover 1954 Chevrolet trucks were released in October, 1954, as 1955 models, while the all-new trucks – the true 1955 models – debuted in March of ’55. 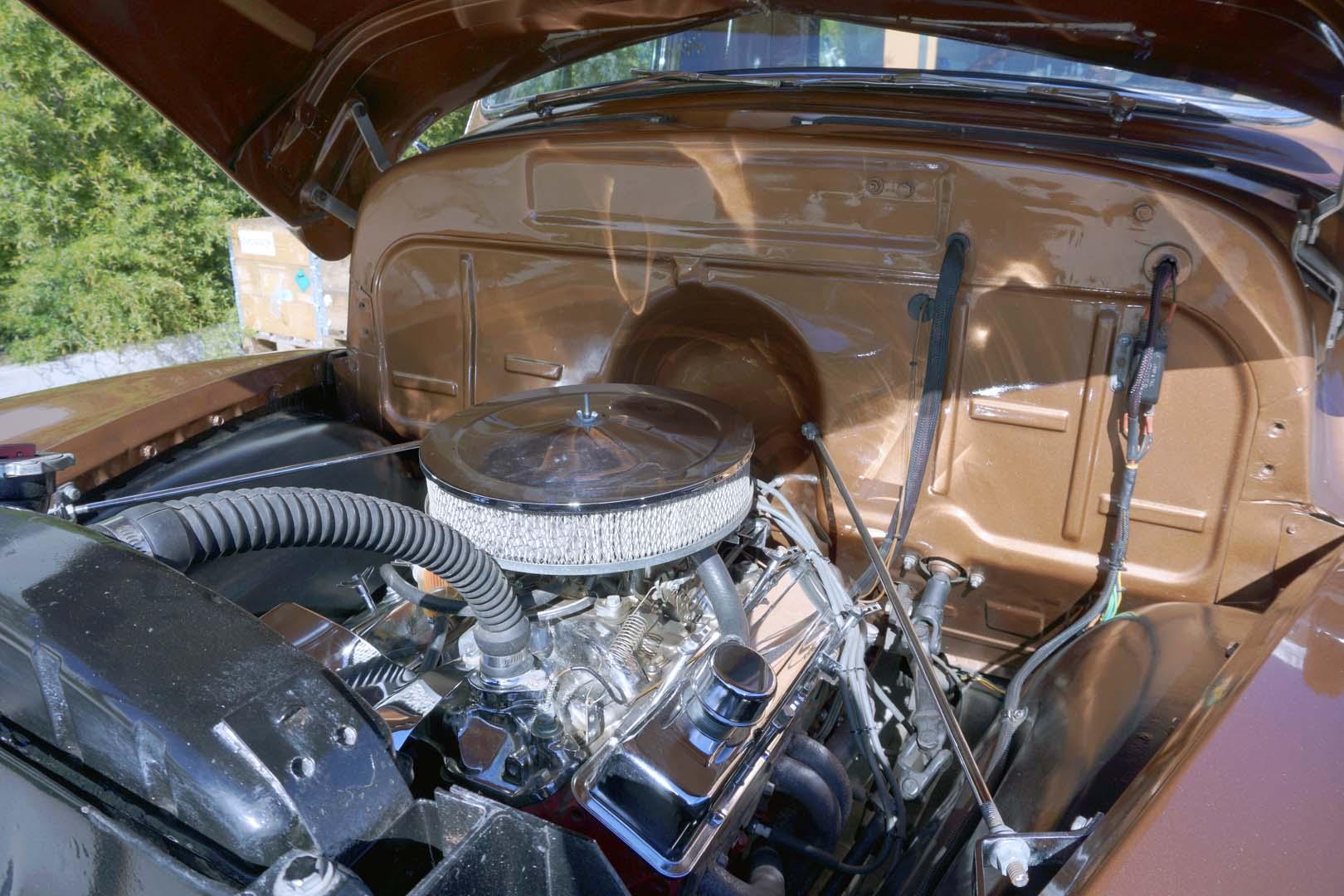 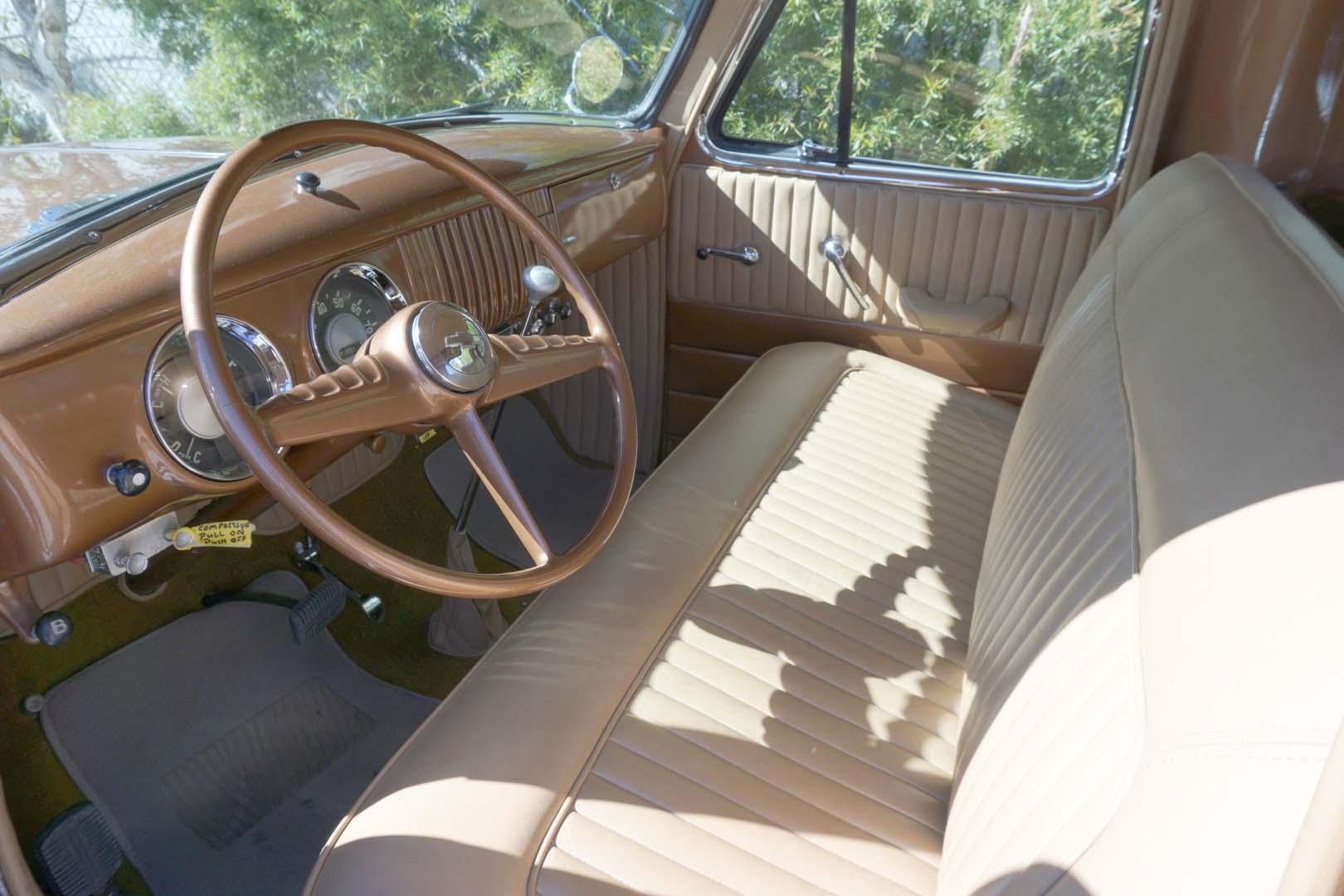 Mick Cory and Brad Lowe, the owners of Midlife Crisis Customs in Rutherford, NSW, love American pickups and are always on the lookout for good examples, with Brad confessing a particular fondness for the First/Second Series models, so when the truck featured – a 1955 3100 First Series - came to his attention in May of 2018, he couldn’t say no to it!

They got the tip about the pickup from a good mate of theirs in California. It looked good and had been given a number of upgrades to make it a great weekend cruiser, while the finish of the paint, chrome and interior meant it had show car potential, too.

As purchased, the truck was pretty much as you see it here. It’s obviously a long way removed from how it was originally built, thanks to a thorough, ground-up restoration and modernisation completed in the US a few years ago

The driveline is now made up of a 350 Small Block V8, with extractors as part of a 2 1/2-inch exhaust system. The transmission is a TH350 3-speed auto and there’s a larger aftermarket radiator, too.

Rack and pinion steering has been fitted and Midlife has had the suspension modified.

A sunvisor, tastefully retrimmed interior and refinished timber slats in the cargo bed were on the truck as purchased, along with timber side boards above the cargo bed, which is a particularly American thing that you see on a lot of pickups over there.

However, it’s the paint on this pickup that really captures your attention. It looks like the Aztec Copper, Bronze Metallic and other similar finishes seen on Corvettes from the late 1950s through the 1970s, and also appeared on some factory Chev pickups in the ’70s.

In a sea of red, black grey and blue, a colour like this is one you don’t see often, and it was a big factor in Midlife Crisis Customs agreeing to purchase this truck for their stock of classic and custom collectable vehicles – they figured if they like it, other Aussies will like it, too. 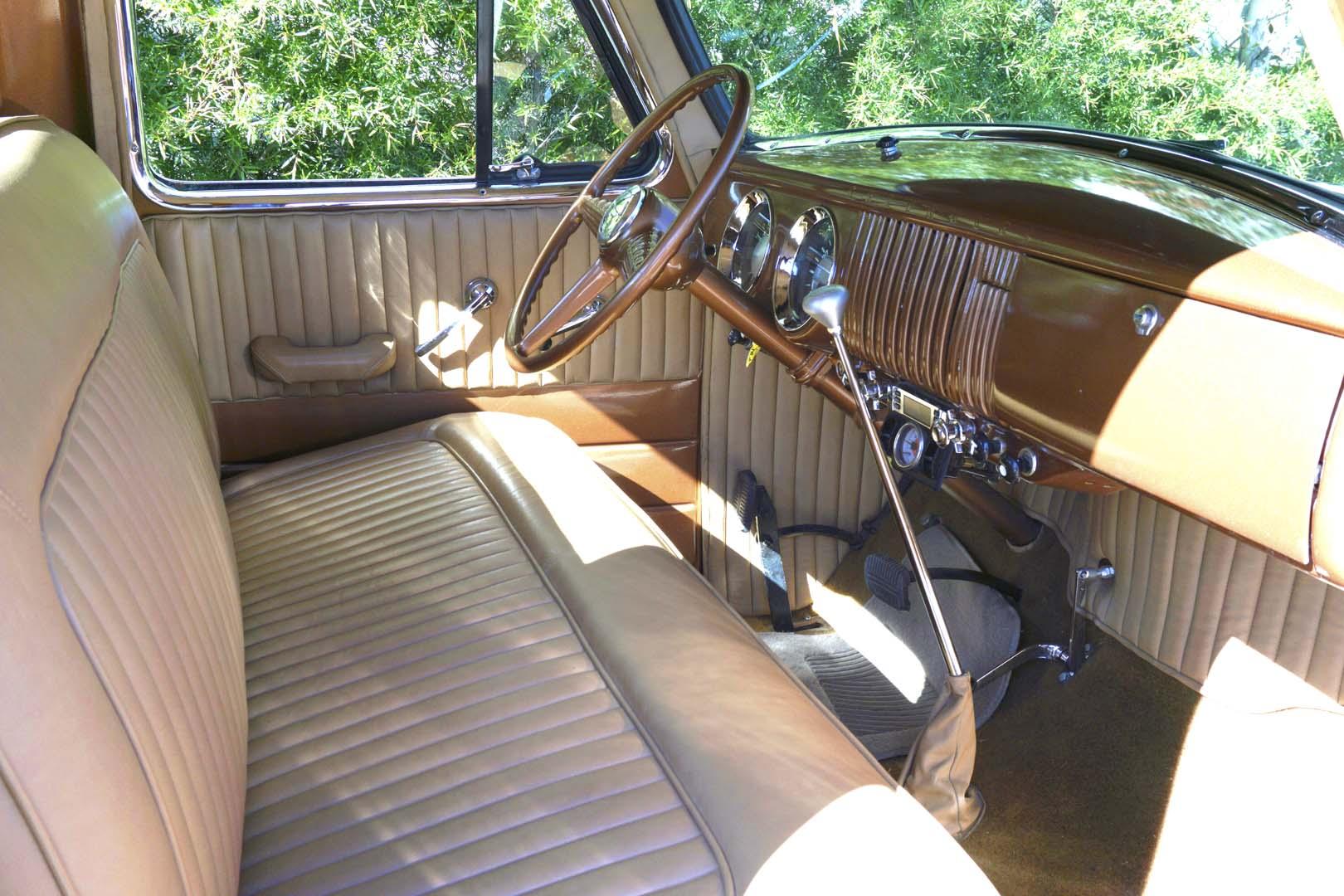 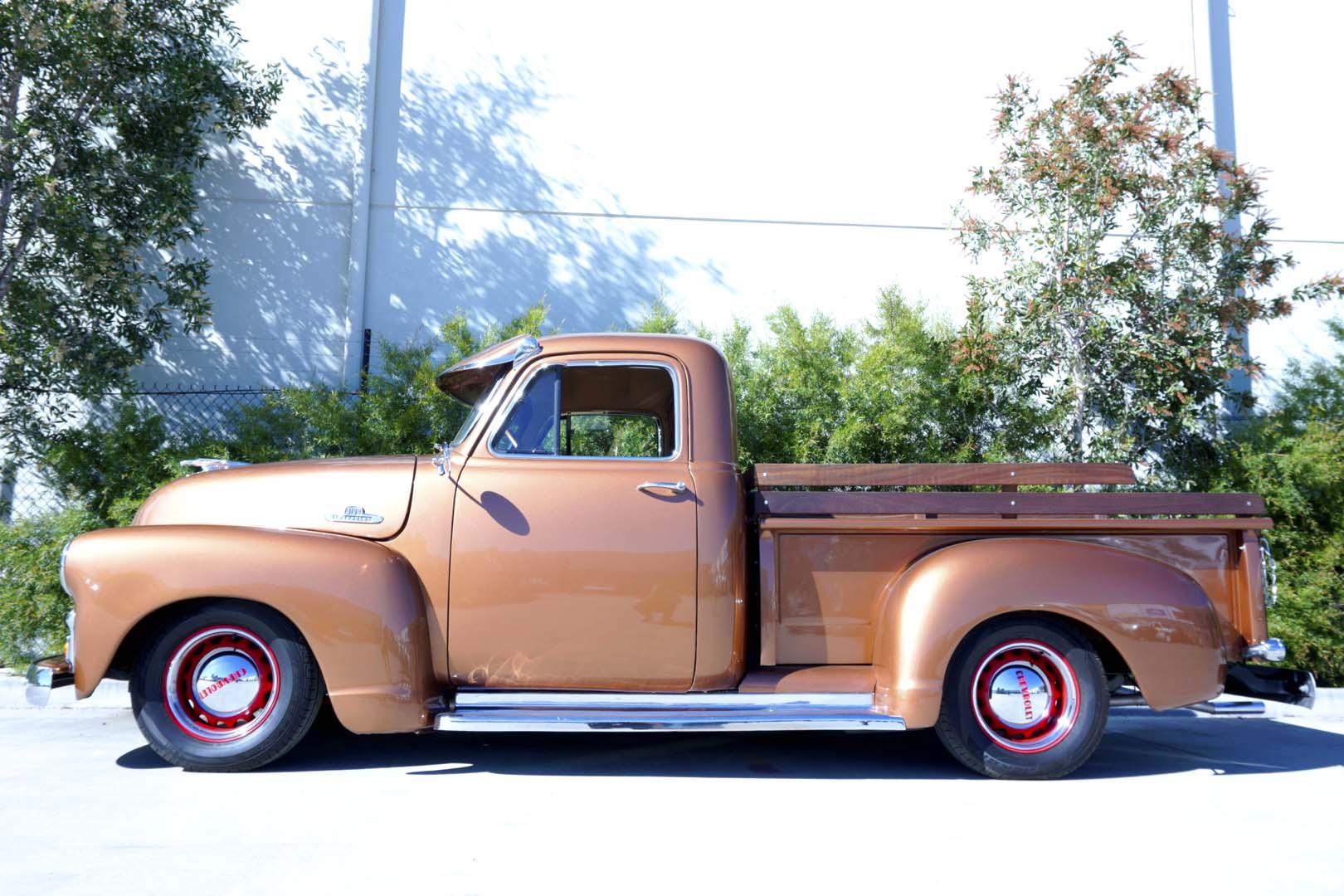 The truck proved to be in such good condition upon arrival that it’s needed nothing mechanically. However, some stone chips on that distinctive brown paint saw Midlife Crisis Customs treat the pickup to a comprehensive respray.

Mick and Brad decided to have the factory-style wheels the pickup arrived with swapped for a set of 20-inch ‘Delray’ rims from Detroit Steel Wheels. Matched to low-profile tyres, these wheels have previously been applied to other classic pickups to good effect, but with their style and colour - and combined with the airbag suspension - they look particularly “right” in this application.

The Midlife boys have taken this ’55 3100 on the road few times since it arrived here and they say it drives really nice, with more than enough grunt from the 350 SBC, a smooth-shifting auto, plush ride and easy steering.

The cabin’s a great place to be, too, and Brad advises any potential buyers (see breakout) to give the interior a closer look, as he reckons it’s one of this vehicle’s best features.

That distinctive brown paint also features inside, while pleated beige trim on the seat and door cards is continued on to the kick panels and even under the dash.

Steering wheel, instruments and dash all remain stock, though, which preserves the old-school style of the truck.

When we first spoke to Brad about this pickup, he didn’t hold back in his praise for it. Considering they’ve got around 50 vehicles for sale in their showroom at the moment, that’s a pretty big rap.

There are a lot of classic pickups out there, but it would be fair to say there’s currently none going around that have the look and features of this one. That makes it pretty cool, in our book. What do you think? 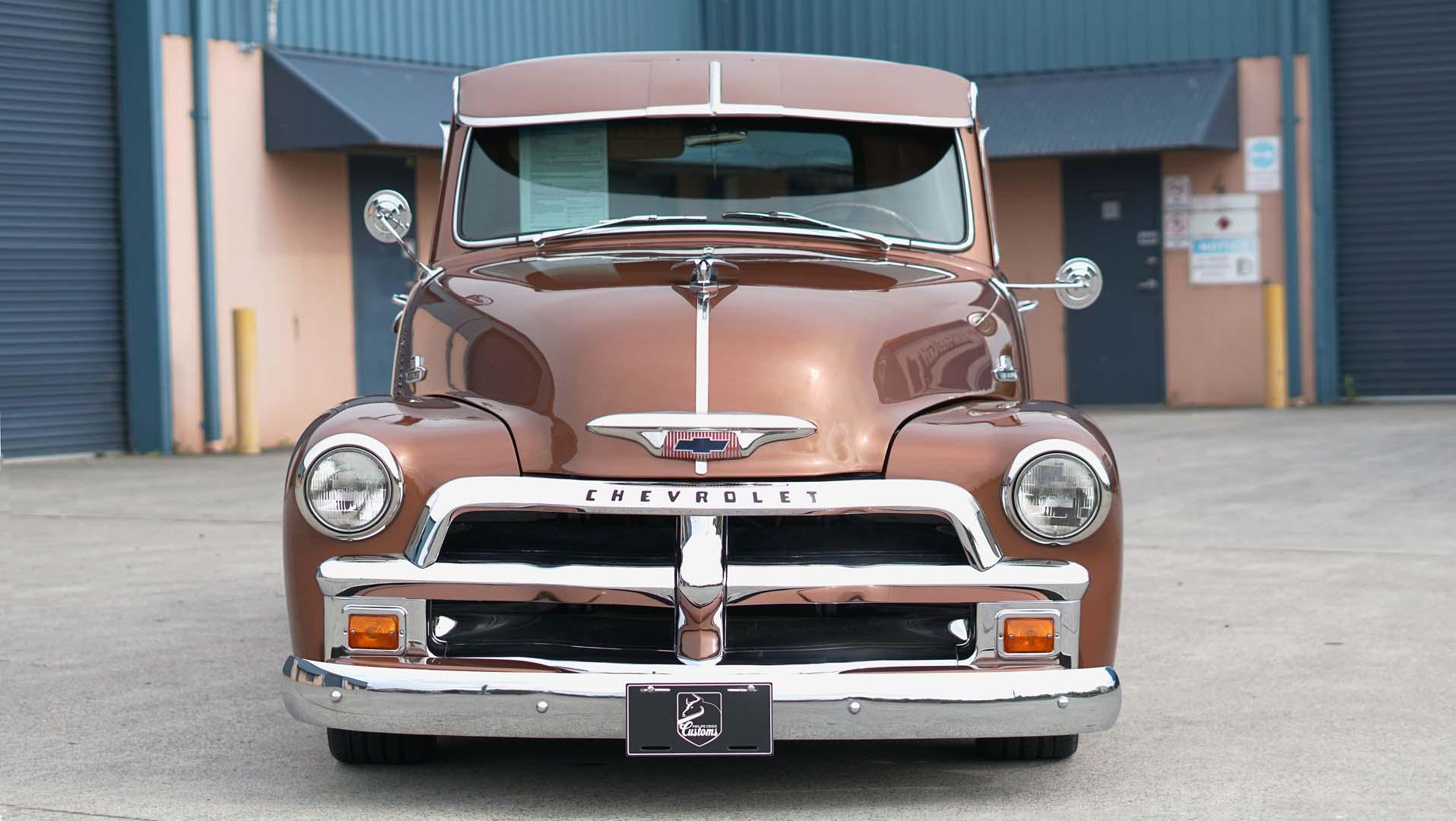 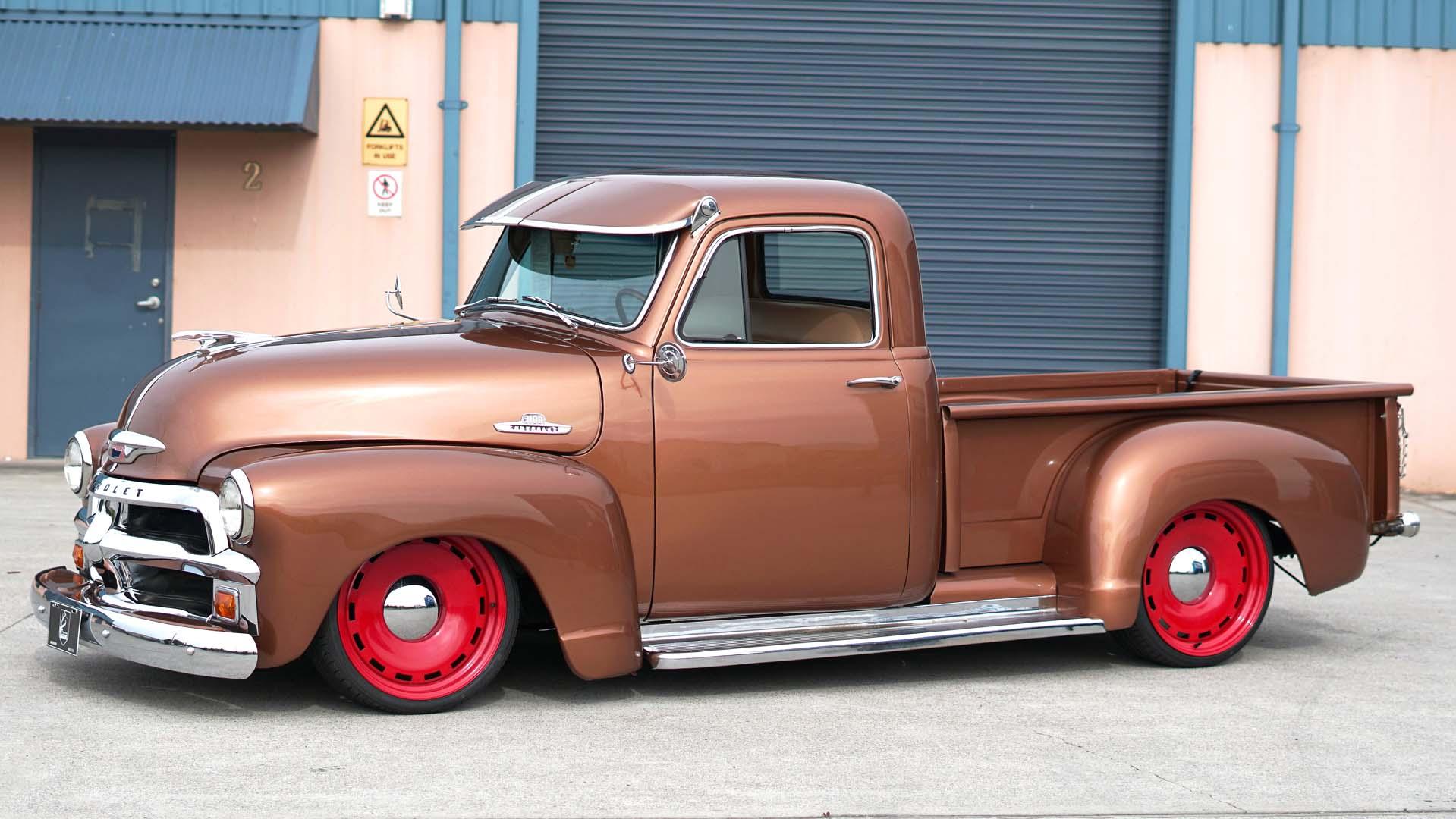 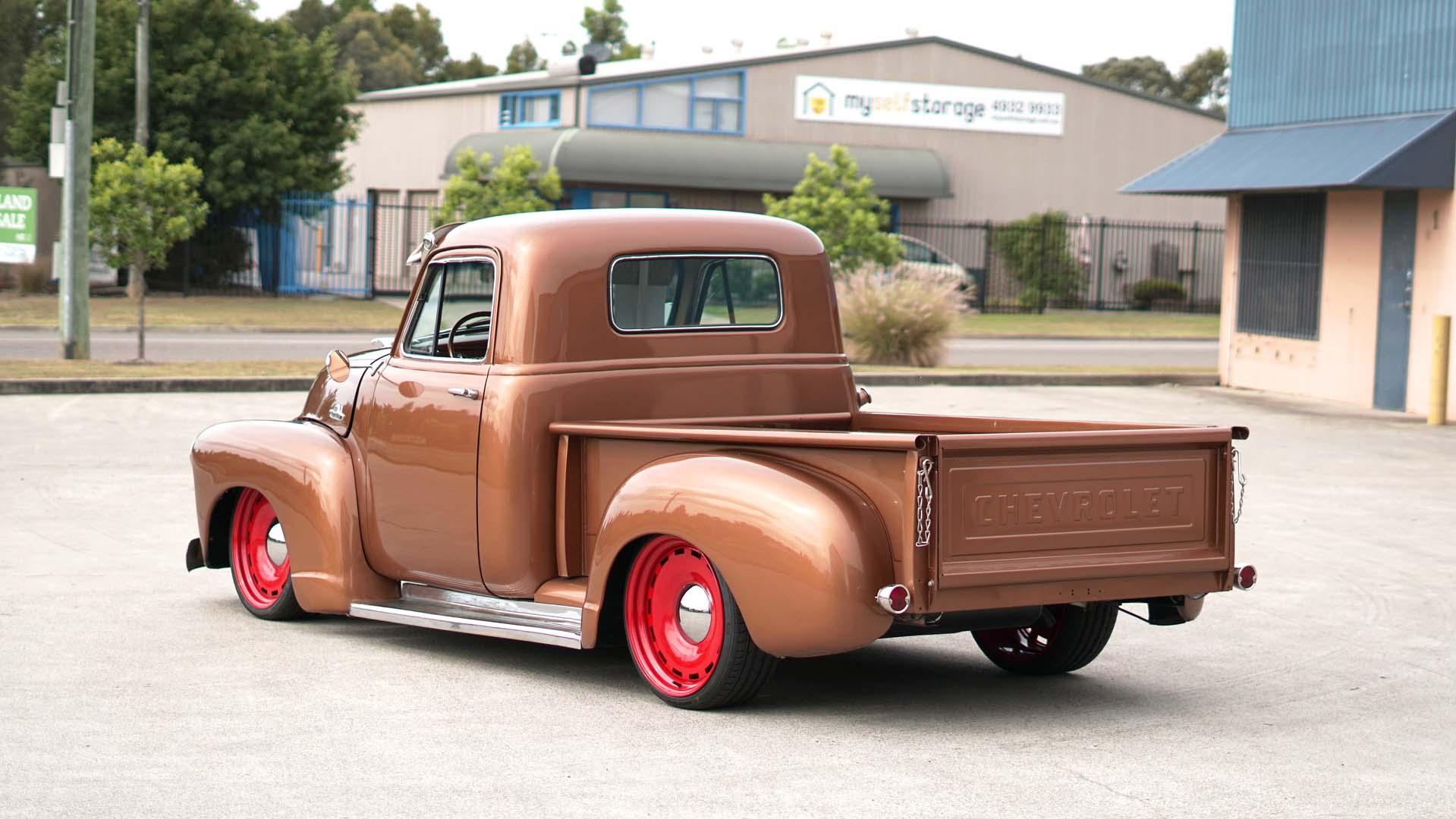 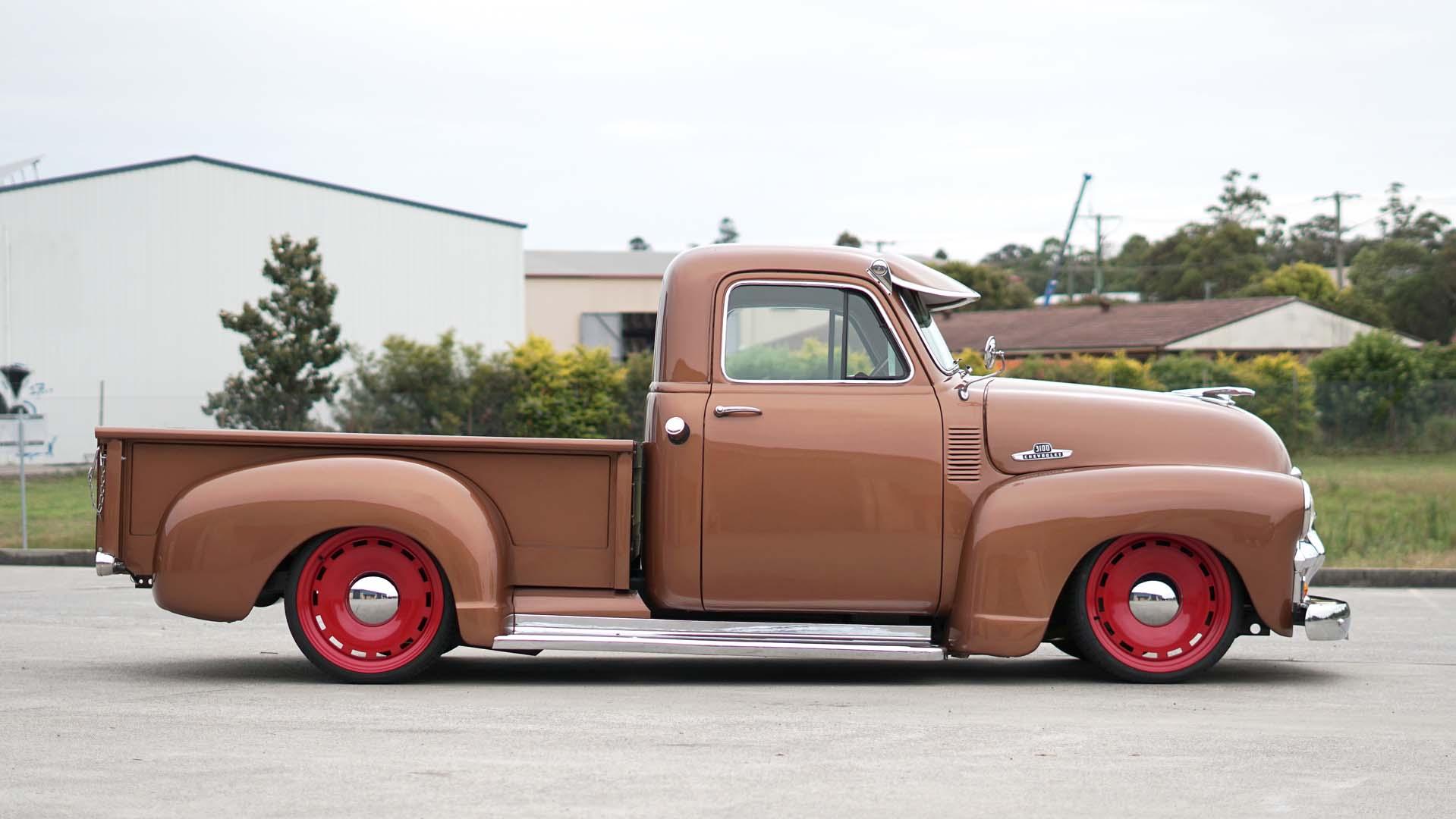 As part of their current stock clearance, Midlife Crisis Customs have reduced the price of this Chev from $65,000 to $59,950. New arrivals are coming, so it has to go.

The vehicle is in extremely good condition overall, and as mentioned earlier, it wouldn’t take much to get it up to showcar spec.

Mechanically complete and reliable, the new owner needs to do nothing but get in and cruise – and get a lot of stares from other road users!

For more details on this truck, or other classic pickups, available through Midlife Crisis Customs, go to: mccustoms.com.au, phone (02) 4008 4210 or call into the showroom and workshop at 323 New England Highway, Rutherford NSW 2320.

Trade-ins are welcome and finance is available. 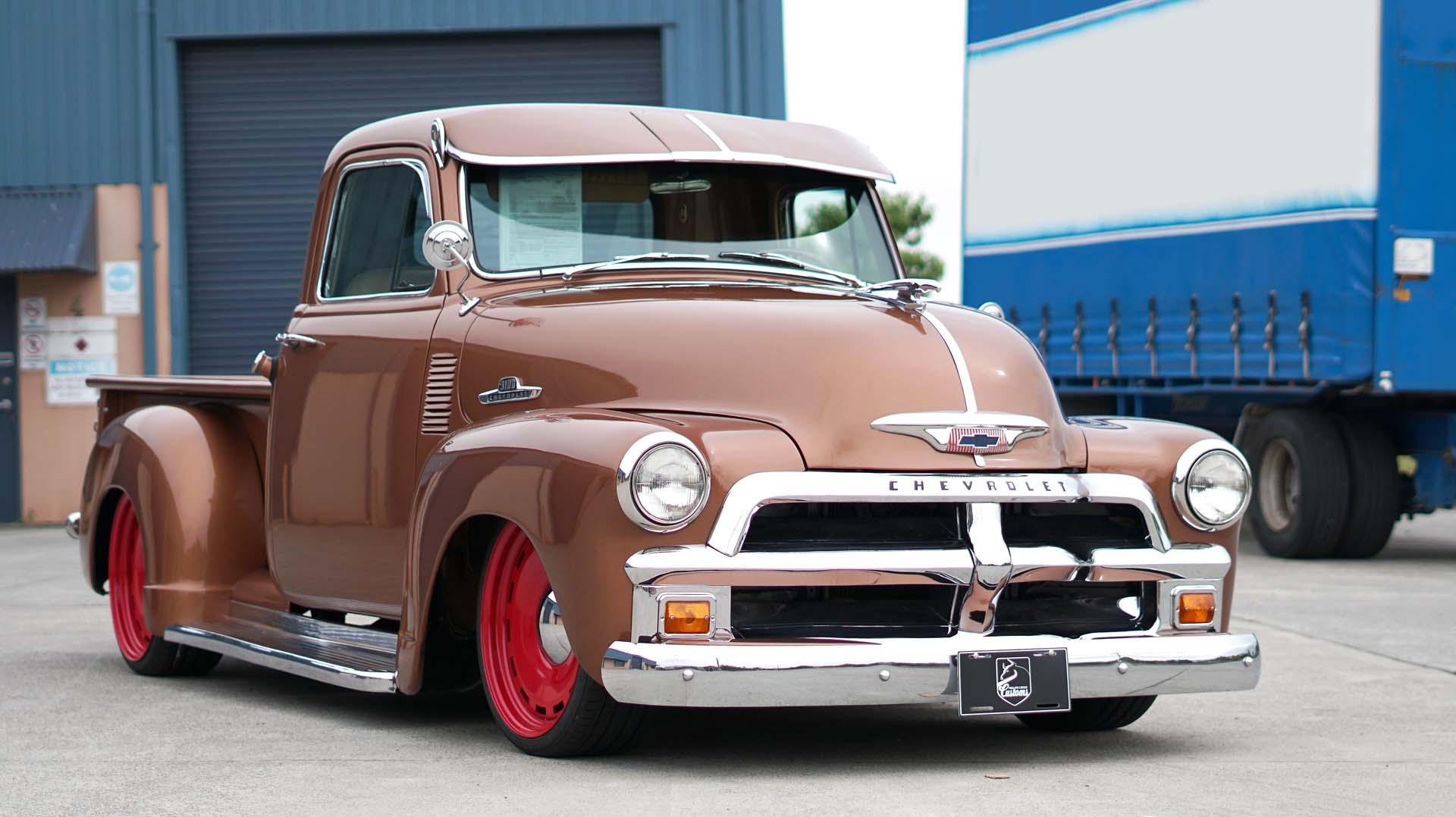