Plymouth was on a roll in 1958. The "Forward Look" designs of 1957 set the Chrysler range apart from their competitors and proved very successful.

As such, not a lot was changed for 1958, but there were some differences across Plymouth's passenger car offerings, including the popular Belvedere range.

The first Plymouth available in a two-door hardtop body style when it debuted in 1951, the Belvedere was further distinguished from its Cranbrook brethren by an exclusive two-tone paint scheme. Three years later, in 1954, Plymouth's entire lineup was reorganised, with the Belvedere positioned at the top of the price range, above the mid-range Savoy and bargain-basement Plaza. These designations were all relative, though, as the entire Plymouth lineup was the low-priced offering in the Chrysler family. Body styles for 1958 remained the same as 1957. The 2-door sedan was relabelled as a 'Club Sedan' to distinguish it from its 4-door sibling. Two-door and 4-door hardtops, identified as 'Sport Coupe' and 'Sport Sedan' respectively, continued for 1958, joined by a convertible, the only softop available across the entire Plymouth range for that year. The Sport Coupe hardtop continued to be popular, but didn't unseat the 4-door sedan, which was the top selling Belvedere for 1958.

Chrysler's Forward Look styling revolution actually started with mild reworkings of the 1955 models, but the big news was the 1957 range. Stylistically, all the 1957 Plymouths created under Virgil Exner's direction were streets ahead of the opposition and a huge hit with buyers, increasing sales by over 44 percent from 1956. As they were so successful, few changes were made for 1958. The big vertical slots in the lower half of the grille were replaced with a continuation of the fine horizontal bars from the upper half of the grille. V8-equipped models featured a gold 'V' in the centre of the grille. The P-L-Y-M-O-U-T-H letters across the leading edge of the bonnet were moved to the bootlid and replaced with a small emblem shaped like a mirror image of the distinctive spilt-level bumper bar. Standard side trim consisted of a single chrome strip that ran the length of the body and wrapped over the tailfin. The 'Sport Tone' trim from the Fury, Plymouth's hardtop sports coupe, was available as an option, and added a second chrome strip to create a 'spear' shape along the flanks. This was either painted a contrasting colour or filled with silver anodised aluminium panels. The Sport Tone option also added a contrasting roof colour, usually in white. 'BELVEDERE' badges on the fins, above the uppermost chrome strip, were common across all body styles. The faux quad headlight look of the 1957 Plymouths changed to a genuine quad headlight front for 1958, when all US states finally made the feature legal. Tail lights were also mildly modified.

While the 1957/58 Plymouths undoubtedly had modern looks, the same couldn't be said for the mechanicals. The 230ci 6-cylinder which had been the standard fitment in Belvederes since midway through 1954 remained. Sedan and hardtop buyers had a choice of the existing 318ci V8 (with two barrel or dual four barrel carbs) or the new "Golden Commando" 350ci V8 as an option, with the smaller V8 fitted as standard to the Belvedere convertible. An exciting addition to the 1958 powerplant options was a fuel-injected version of the 350, but the "fuelie" seems more myth than reality nowadays. The Bendix-developed "Electrojector" fuel injection system first appeared in 361 V8-equipped DeSotos, but almost immediately proved to be unreliable. According to allpar.com, the negative experience with the DeSoto meant only around half a dozen 1958 Plymouths were fitted with the system before the idea was abandoned. Despite being highlighted in Belvedere advertising, very few - Allpar suggest only two - Plymouths left the factory with fuel injection fitted, while other sources indicate it was only ever fitted to the Fury, and no Belvedere ever received the option. Transmission choices remained as per 1957. A 3-speed manual (with optional overdrive) was standard, with the PowerFlite 2-speed or the better TorqueFlite 3-speed auto optional. Both auto transmissions featured dash-mounted push-button operation.

Interiors were usually colour co-ordinated to match the exterior, with the vinyl seat trim available in a variety of subtle patterns and grains. Bench front seats were common across all models, with the hardtops featuring a different upholstery pattern to the 4-door and Club Sedan. Bearing in mind that Plymouths were the lower-priced offering from the Chrysler stable, few features came as standard. Belvederes only featured full wheel covers, rear quarter panel stone guards, front guard ornaments, a dash-mounted electric clock, lockable glovebox and a cigarette lighter as standard. Power assisted steering, whitewall tyres, tinted glass and power brakes were amongst more than a dozen items on the options list.

Of the four years that the 'Forward Look' Belvedere was available, the 1958 models are arguably the best-looking examples. The '58s were generally better built too, as the rush to introduce the new cars had led to a number of rust and quality control issues with the 1957 models. While not as popular or widely available as 1957 Chevys and similar late 1950s Fords, the 1958 Belvedere offers a similar level of comfort, performance and an unmistakable style.

1958 Plymouths were also available in Canada, but were not sold under the usual moniker. Badged as the 'Dodge Mayfair', this distinctive combination featured a Plymouth body, but with a Dodge front end. Priced and spec'd to a similar level as a Belvedere, the Mayfair was the premium Canadian Dodge offering for 1957/58, with only a few thousand produced for each year.
In other overseas markets, a similar combination of Belvedere body and Dodge front end was sold as a 'Dodge Kingsway Custom', while a similar Belvedere/DeSoto hybrid was also available in the form of the 'DeSoto Diplomat Custom'. In all instances, the Belvedere-based vehicles were at the top of their respective ranges.
------------------

While some purists bemoan the number of 'fake' Furys the movie Christine has been responsible for creating, the fact remains that it's largely thanks to John Carpenter's 1983 cult classic that there are so many 1957/58 Belvederes around today, even though some of them may no longer be wearing Belvedere badges! 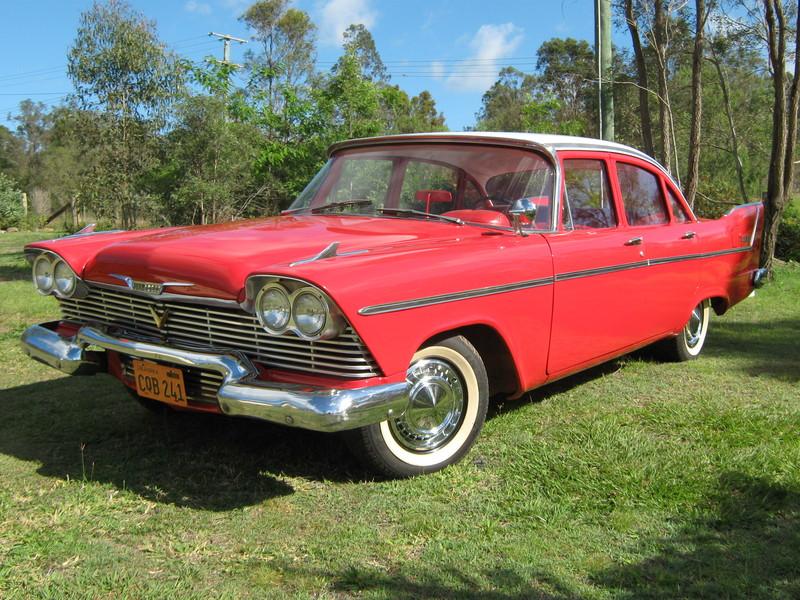 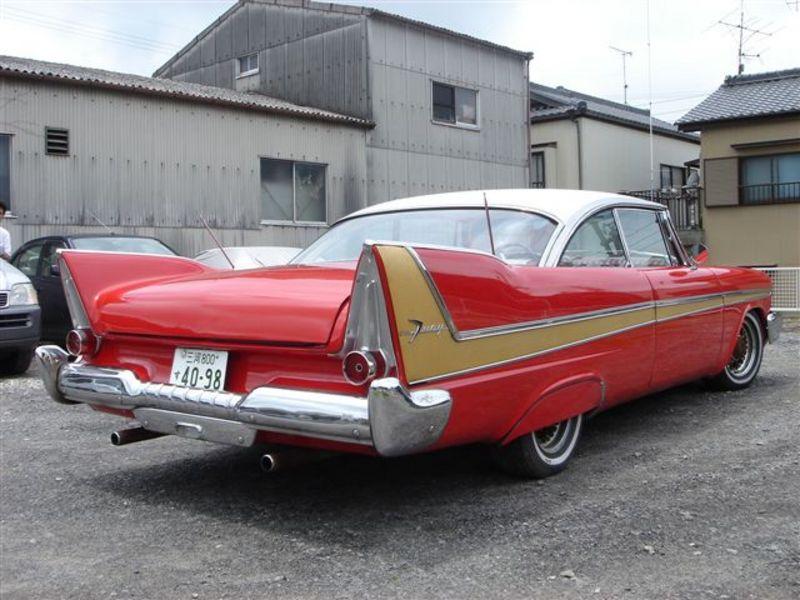 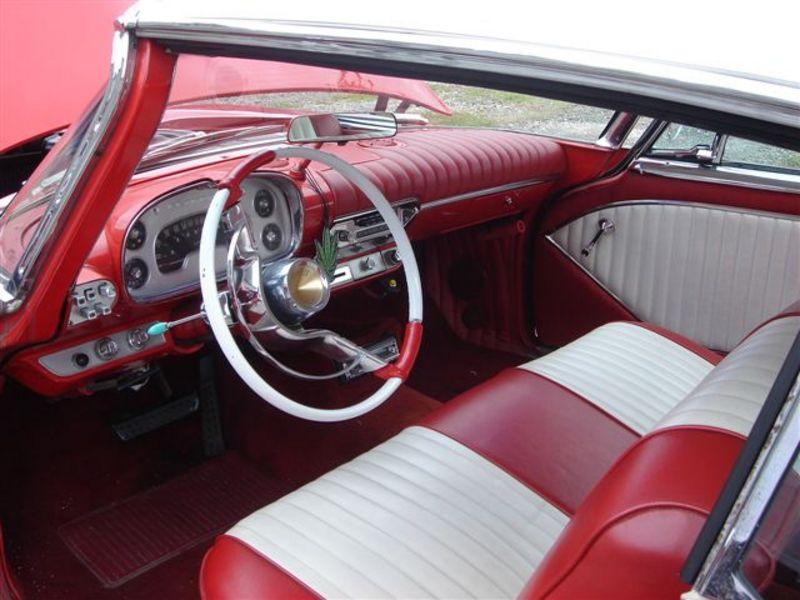