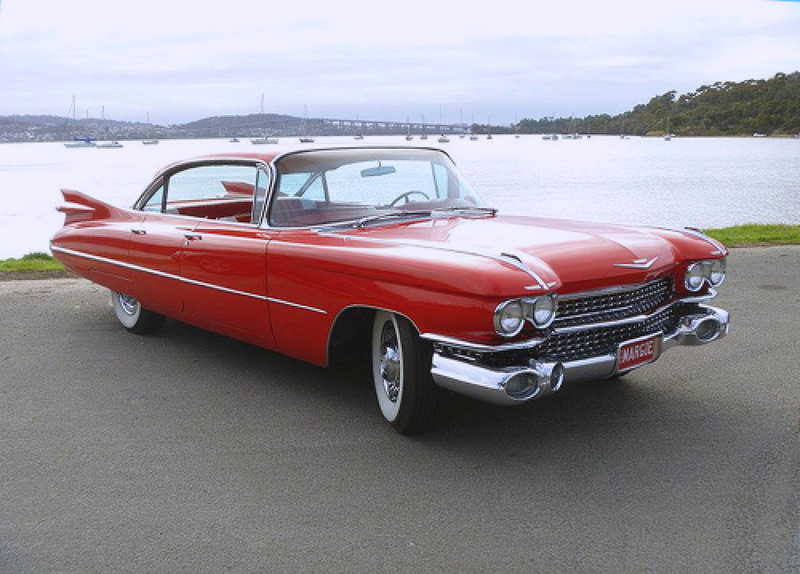 Paul decided to undertake his first classic car restoration after a history of working on cars and creating custom offroad machines
Giving a whole new meaning to the words "dedication" and "determination", Paul Oakley's project is something special. It's not just a great-looking car. There's also a great story behind it.

Paul decided to undertake his first classic car restoration after a history of working on cars and creating custom offroad machines. Conditioned by a steady diet of American TV shows as a kid, Paul had fallen in love with the big Detroit tanks that populated those shows.
"I think I've always liked American cars," Paul said of his passion. "I'm a car nut to start with, I guess, but watching American television as a kid, I used to see these cars. They weren't like ours. They were huge!
"The Cadillac has always stuck in my mind, as it has for a lot of people, because it's got what I suppose you would describe as that post-War American decadence. I looked at a few 50s and 60s Chevs, (but) I think it was always going to be a Caddy," Paul said of his preferred machine - the iconic 1959 model Cadillac. While the choice of marque wasn't unusual, Paul's preferred body style took a bit of a left turn, settling on a sedan instead of a coupe.
"I think there was something with the sedan as well. I've always found them more stately and there's just 'something' about them."

After searching through magazine and online classifieds, Paul eventually found what he thought was a ripe candidate for his dream machine in the form of a 1959 Cadillac Sedan de Ville, sourced through regular JUST CARS advertiser, Westcoast Classic Imports. From his home base in Hobart, Paul and his young son Blair - who would be integral to the project - made the trip to South Australia in October, 2006, to check out the Caddy in the metal. It was by no means the best Cadillac that Westcoast had in their yard at the time, but it was a California car running its stock 390 V8, it was 99-percent complete, and it was cheap.
"It appeared that somebody, certainly not in Australia, had tried to restore the car," Paul said referring to the primered exterior and bundles of taped up sections in the boot.

Paul concedes his decision to purchase the rough, but largely complete Cadillac was an emotional one, and upon reflecting through his photo history of the resto, was a far more daunting job than he originally remembered. Paul's estimation of the timeframe for the project was also a bit naïve.
"Yeah, I underestimated it . . . substantially!," he laughed. "I said I was going to have it on the road in two years," he added, referring to the original plan to make no more than a tidy runner out of the Cadillac. "When I bought that car, I was never going to do the restoration that I actually did. But, before I knew it, I just pulled the whole friggin' thing apart. . . and I decided to go all the way with it."

At this point, the project gets a little more interesting. Paul's home is on a sloping block, with a narrow driveway and small backyard with an even smaller shed on it - not exactly a Cadillac-friendly environment. So rather than send the car out, or clog up his work premises with a Caddy in a dozen bits, he decided to build a new shed in the backyard, for the express purpose of working on the Cadillac - now that's dedication! Around six weeks after the concrete was down and the shed was up, the Cadillac was rolled into its new home and the real work began.

First job was separating the body from the chassis for stripping and painting.
"I got to the stage where I pulled it totally apart. A lot of people were taking the piss out of me around that period," he recalled, referring to their jokes about his disassembled scrapheap. "But that kind of steeled me a little bit. As much as I laughed along with it all, I thought 'No, I'm going to finish this!'"
The location presented its own challenges, too. A tight right turn from the driveway into the shed meant the Go-Jacks meant for the Cadillac were often used to manoeuver parts-laden trailers around the right angle bend as well!

With the chassis sandblasted, repainted in two-pack black and rolling on a set of new, period authentic whitewalls, it was too good to just drop a mediocre body on, so Paul's original intentions changed. The Caddy wasn't going to be just a runner. It was going to be a stunner, but that presented its own challenge in exactly who could produce a body to meet the standards Paul had now set.
"I hit a wall there at one stage when I had a rolling chassis where I got everything was shiny and new on the chassis - the engine, transmission, the brakes and steering. It was all there, it was all done, it was all new. Anything you start putting on a shiny chassis, you just don't want to put any old piece of crap back on there," Paul said.
It wasn't until he'd been introduced to Peter Castle, an experienced body man and spray painter in Hobart, that Paul felt he had someone who could do the job to the level that the project now demanded.
"He was the one guy who could realistically take the job on," Paul said. "And he said to me 'I'm not going to touch it unless it's bare metal'. I'd thought about bare metalling it, but, you know, I've never done bodywork myself. I've always been guided by people like that. Once I met him and he said 'bare metal', that became a necessity!"

The Cadillac had originally been painted in 'Rosewood', a dusky pink colour, but Paul selected GM'H's in-your-face 'Sting Red' for the respray, which Peter laid down with 16 separate coats of acrylic. The choice of acrylic is more common amongst the 'old school' painters, but modern 2-pack was used for the engine bay and interior shell.
"The bodywork is the thing. Regardless of how nice it is underneath and how complete it is inside, everyone looks at the body. You can't afford to stuff it up," Paul said. Fortunately, he'd found a real craftsman in Peter.
"He really does great work. Where patches are normally put in place where it's just too hard to weld behind, he'd actually cut them out, smash the bog out, then he'd panel beat that piece out, then he'd weld it back in. He didn't use any filler, either, just skim coats. He took a long time - he only does one project at a time - but he's an amazing tradesman."

With the body being panted, and the seats being re-upholstered by one of the few specialist motor trimmers in Hobart, Paul and Blair set to the task of getting all the stainless and chrome parts up to the standard of the rest of the car.
"All those stainless steel bits that I thought would come up with the hand polish, they wouldn't, you know. They all had to be put on a buffing device, I spent so many hours polishing, and got some stuff professionally polished as well."
One particular problem section, which Paul explained is common to most '59 Cadillacs, is the trunk trim panel. On Paul's car, this stainless trim piece had been heavily damaged. With replacements near impossible to come by, salvation was at hand in the form of another JUST CARS regular, Old Yankee Imports in South Australia.
"I got onto Andre from Old Yankee Imports about it," Paul explained. "He said 'I think I can fix that'. He knew what I was doing with the car. I said 'I don't want something that's got ripples all the way through it'. But he got it to show condition, which was just amazing."
In addition to Old Yankee, Paul found that Dan's Classic Auto Parts in Oregon, USA, proved to be a great source of reproduction parts and hard-to-get items, too.

Despite the four year process (yes, really!) of getting the seats trimmed, the project was going along relatively smoothly. An ill-timed decision to strip out all the wiring, then leave it in a spaghetti tangle for a few months, and thus forget exactly where everything went caused some consternation "I thought 'You idiot, Oakley, what have you done?'," Paul laughed. But patience and sparky friend, Mathew Bishop, meant everything was eventually spliced and plugged in to where it was meant to go. "Putting the front end back on - that was my favourite part, though" Paul remembered. "Just to get that grille re-assembled - getting its 'face' back. I put a battery in it and fired up the lights. They worked!"

Late in 2011, it looked like the Sedan de Ville would be ready by Christmas. However, as Paul figured, it wouldn't be a resto without some problems, and a couple of beauties came up as the completed Cadillac was fired up for the first time. Incorrect welsh plugs in the heads, followed by a bent flex plate in the gearbox meant the project was in hiatus until the start of 2012. Due to work commitments, Paul wasn't able to get the Caddy fixed until March, but it's now running as smooth and trouble free as he first envisaged back in 2006. Paul's final touch was the custom plate 'MARGIE' in honour of his mum, who passed away three years ago.
"I say to my old man that we both love high maintenance old bags!," Paul laughed.
While his mum sadly never got to see the finished car, the project's positive was the great father and son bonding experience it provided.
"(Blair's) got a lot of ownership of the Caddy," Paul said, acknowledging his son's almost continuous involvement in the project. "He's incredibly proud of it, and he's made sure all his mates know about the Caddy. It's been a real plus for him. He's very emotionally attached to it."

With the Cadillac completed, and not leaving the Oakley garage anytime soon, Paul is looking for another challenge, albeit a little less complex. With the plan to restore a classic XK-XP Falcon ute to authentic specs, like the Cadillac, Paul's been trawling JUST CARS looking for the right candidate.
"Most people seem to get an XP or something similar and they'll put all new stuff and running gear through it. That's nice, but it's just not what I want in a car. Mine will handle like a 40-year-old car!," Paul concluded. 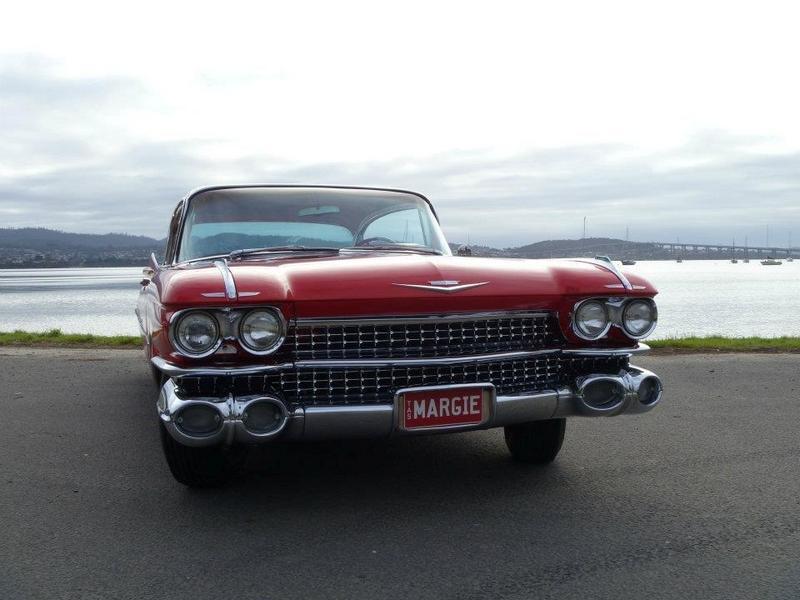 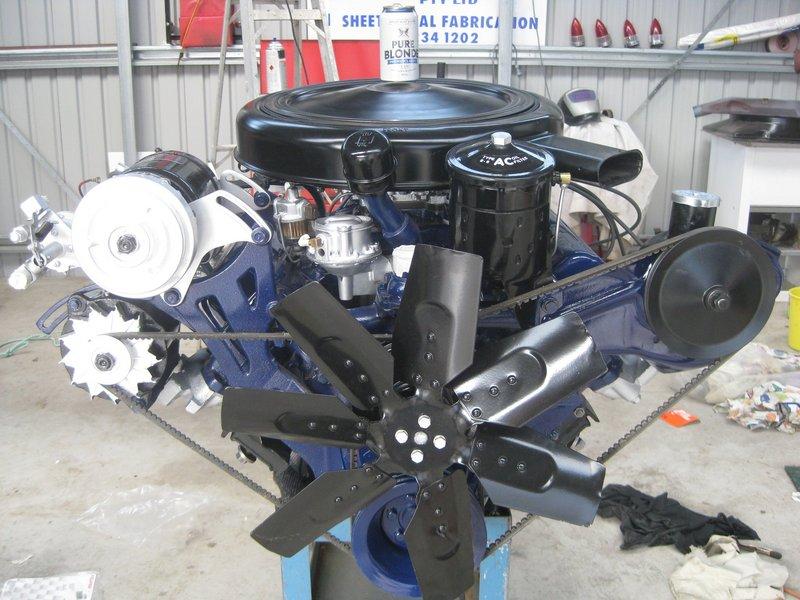 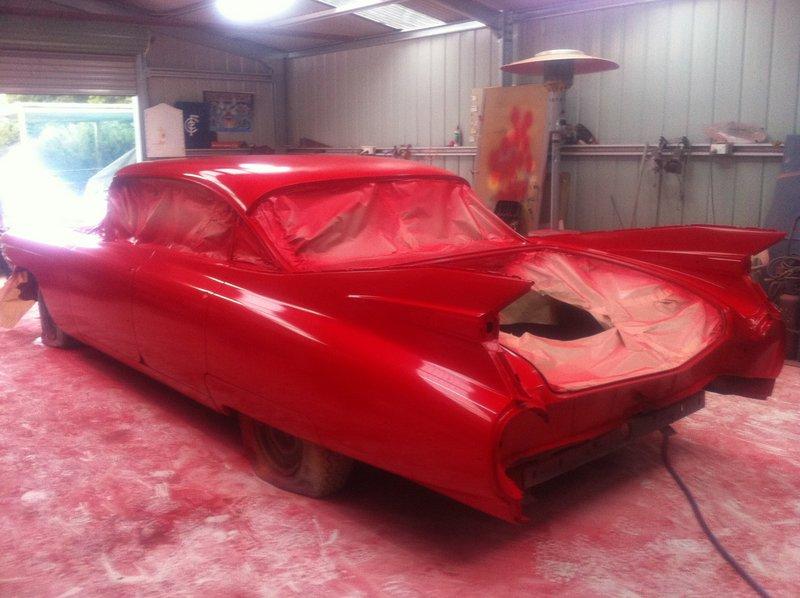 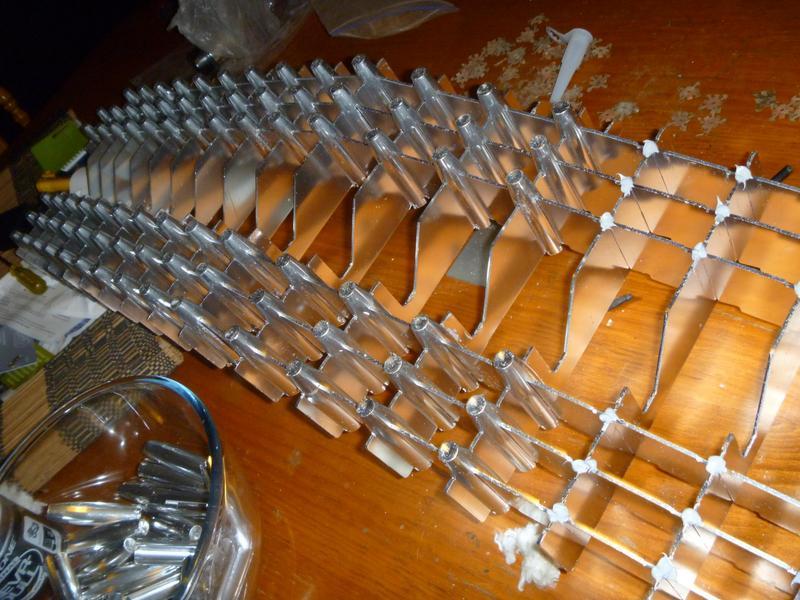 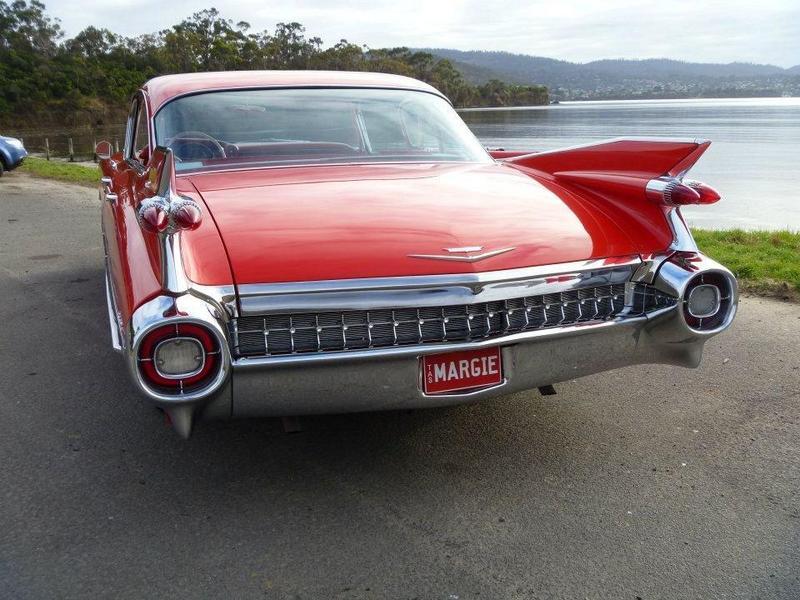 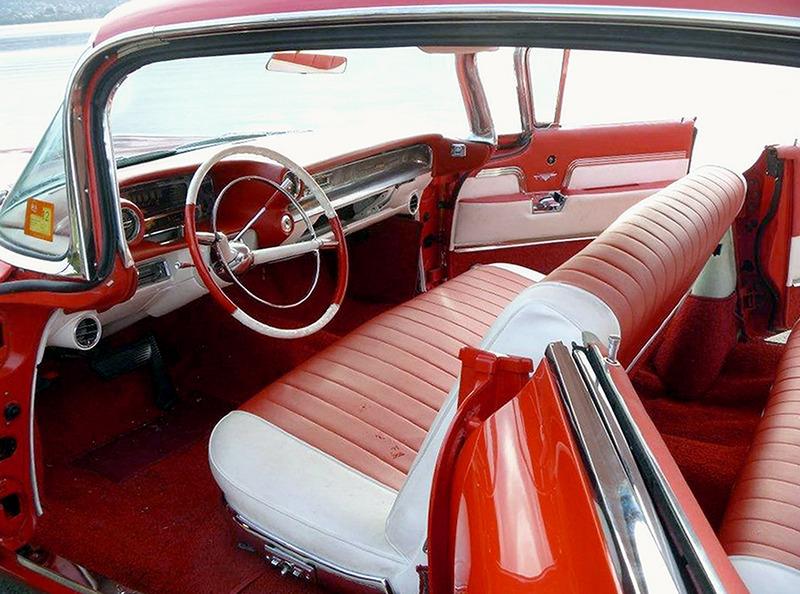 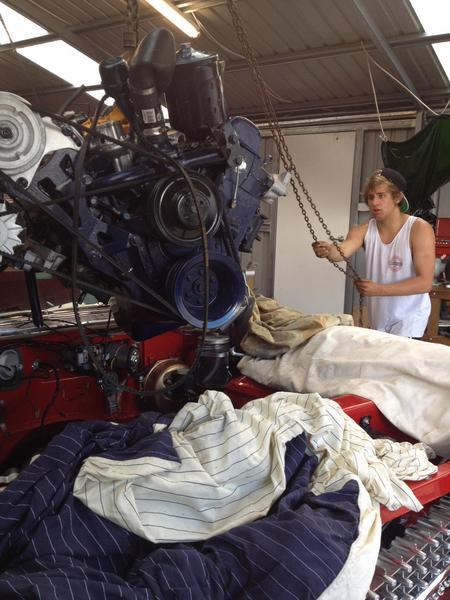 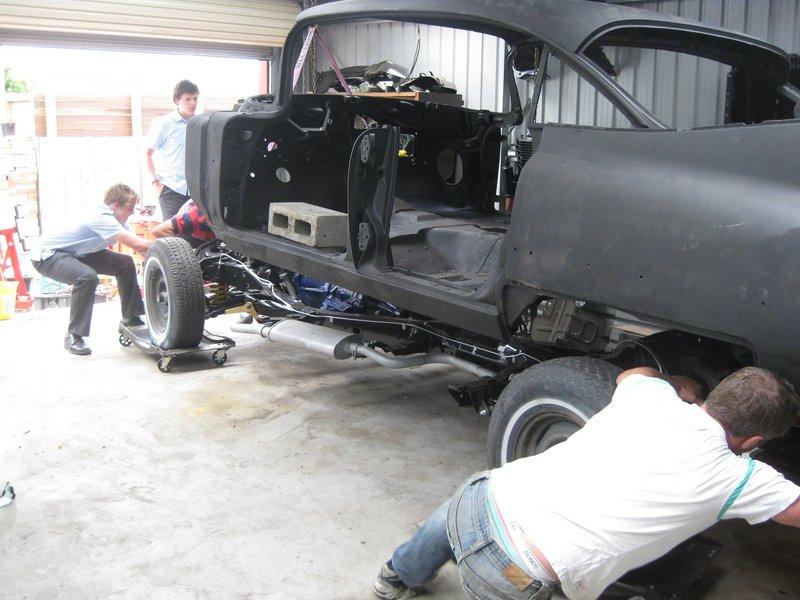 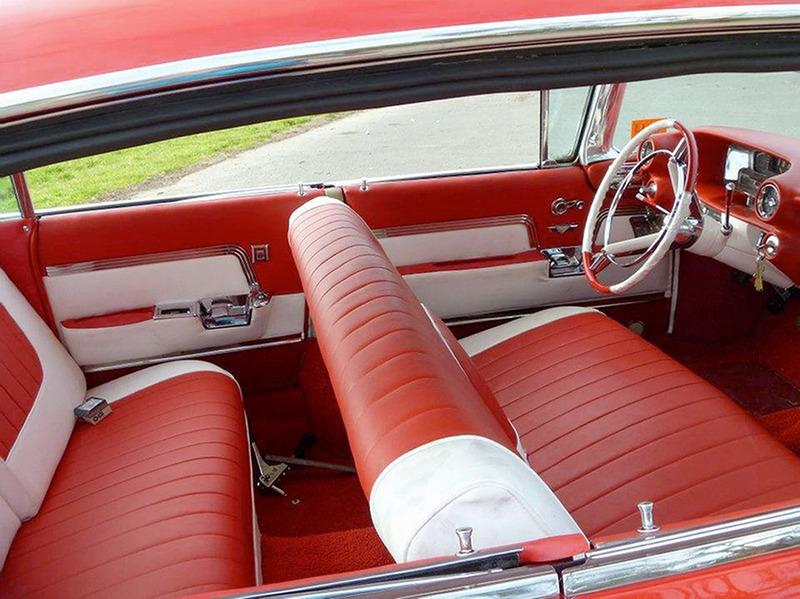