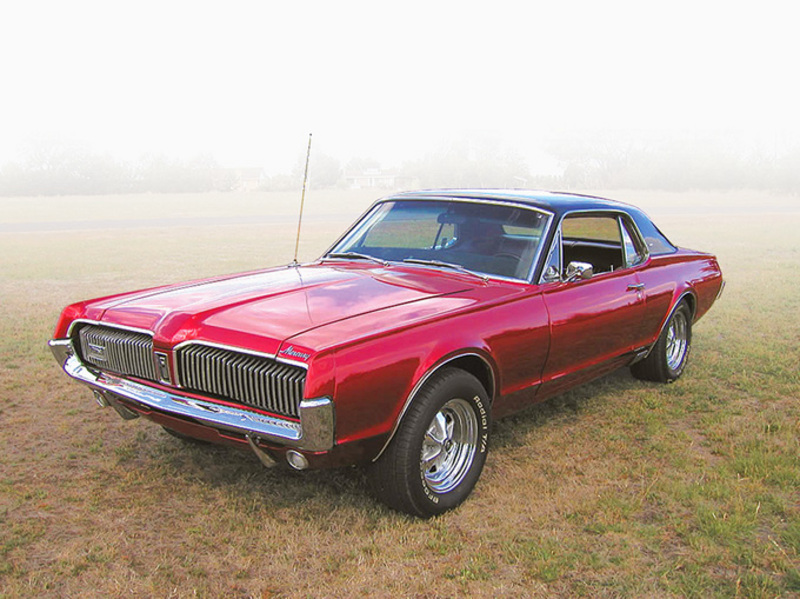 While actual championship wins were thin on the ground, a closer look at Gurney's race schedule throughout the mid to late 60's reveals why. In 1967 alone, Gurney competed in the Indy 500, Le Mans 24 hour race, Formula 1, Trans Am, NASCAR and Can Am - the guy was just too busy!

When his car held together - he rarely crashed, but was bedevilled by mechanical failures throughout his career - Gurney could win in just about every category imaginable. You name it, if it could be driven around a circuit - and driven fast - Dan was the man to do it!

Gurney's racing career started back in 1955, in a second hand Triumph TR2. In the ensuing 15 years of Gurney's active driving career, just about every race car of note could be crossed off a 'must drive' list: Ferrari 250: Maserati Birdcage: Shelby Cobra Daytona; Lotus 19 & 25; Brabham Climax; Lola T70 & T160; McLaren M8D; Ford Mk II (aka GT40); and that's just the open wheelers and sports cars! Gurney also built & raced his own 'Eagle' open wheelers, being one of only two F1 drivers to win a race in a car of his own construction, Jack Brabham being the other.

Moving on to coupes and sedans, Gurney tried his hand at NASCAR several times, and it's here the connection to this issue's feature car starts to evolve.

Despite driving a diverse selection of machinery, Gurney retained a close affinity with the Blue Oval. Several of his sports cars and open wheelers were Ford powered, while Gurney ran most of his NASCAR races behind the wheel of a Galaxie or Mercury Cyclone.
In addition to campaigning a full F1 season, Can Am and NASCAR races in 1967, Gurney squeezed in a few drives in the fast-growing Trans Am class.

Created a year earlier to cash in on the 'pony car' craze, Trans Am racing featured machinery as diverse as Porsche, Alfa Romeo, Mustang, Lancia, Simca, even Saab (!) in under 2lt & over 2lt classes. The focus for fans was the latter category however, and for the '67 season, the Mustangs had not only Chevy Camaros, Plymouth Barracudas and Dodge Darts to race against, but also some 'in-house' competition in the form of the new Mercury Cougar.

The Cougar was riding the crest of a wave in its debut year, winning the 'Motor Trend Car of the Year' award (the equivalent of our own Wheels Car of the Year).

Mercury bosses undoubtedly saw an appearance in Trans Am as a sure fire way of boosting sales of their ponycar to the increasing numbers of spectators at these events. The structure of Trans Am - points were awarded to manufacturers, not drivers - meant it was a real 'battle of the brands', fans rooting for their favourite cars rather than drivers.

So, with a commitment to compete in late 1966, Mercury made their sure they didn't do anything by halves for their debut year, hiring Bud Moore Engineering (of NASCAR fame) to prep the Cougar race cars and run the team which consisted of respected drivers Ed Leslie, Peter Revson and Parnelli Jones as well as Gurney.

As mentioned, Gurney's international schedule prevented him from committing to a full season, but he did enter the first three races, as well as the '67 Trans Am season finale, reaching the top step of the podium once, as well as recording a third place finish.
While these results may not seem much of a reason to name a car after the guy, to put it simply, in 1967 Gurney was GOLD. A Can Am win in late 1966, victory in the Formula 1 race at Spa and the Le Mans 24 Hour race, plus a string of top ten or five finishes in most of these categories in '67 as well as the Trans Am results made Gurney the logical choice to be the 'face' of Cougar sales. Thus, the Dan Gurney Special - this issue's feature car - was created.

But back to the Cougar. While Gurney was away winning races in other classes, his place in the Bud Moore team was capably filled by Revson, Jones and David Pearson. In fact, the Cougars were so successful, they came within two points of snatching the '67 Trans Am championship from the Shelby Ford Mustang team. Ford execs, unhappy about what they saw as racing against themselves, unfortunately canned the Mercury factory effort, only privateer Cougars returning for the 1968 season.
Available on XR7 hardtops for the 1967 model year only, the Dan Gurney Special is like most Mercury Cougar specials these days - pretty thin on the ground!

The appeal of this issue's feature car, however, lies more in its condition today than its rarity. A two owner California car from new, the previous owner has treated this Cougar to a comprehensive professional restoration.

Starting under the bonnet, the 302 Windsor V8 has been bored out .30 thou over, the heads have been rebuilt, an Edelbrock manifold and carby have been added as well as Ford Motorsport valve covers, Headman headers, plus a four core radiator and flex fan for better cooling. Service records indicate less than 300K has been done on this upgraded engine set-up. Originally a C4 auto from the factory (most buyers went the auto route), a new 5 spd manual trans has been fitted, plus power disc brakes, power steering, 9" posi traction rear end (upped to 3.25:1) and Flowmaster dual exhaust. The front end suspension has been rebuilt, too.
Inside, the simulated walnut dash, carpets and upholstery are in perfect condition. The latter two are new, a new headliner fitted at the same time.

The aftermarket Grant steering wheel is a nice match to the 'dark levant' leather interior. The 'piece de resistance' on the inside, however, is $3,000 worth of stereo gear, including professionally boot-mounted amps and a big pair of rear seat sub-woofers.
Outside, the two tone duco (black over Laser Red), is a recent bare metal respray job, the metallic of the base red (which is more of a maroon, actually) looks great.

New hosing has been fitted for the vacuum-operated headlights, so no worries about 'lazy eye' lights. The rear tailights with their sequential indicators work as they should, too. The chrome trim and bumpers are impossible to fault, period 15" Ralley wheels complete the package, arguably a more attractive wheel option than the original Turbine covers.

All up, this Cougar has a lot to recommend it. From top to tail, it's very, very clean, the stereo package alone is a major plus. Factor in the rarity of this model and the Gurney association and you've got a cruiser with lots of grunt, that's different enough to stand out from the masses of Mustangs.

When new, the Cougar sat in between the Mustang and Thunderbird in the Ford lineup, offering more comfort than the former, without the 'land barge' attributes of the latter, and this is where it still sits today.

Other options are pretty much the same as the Camaros, Firebirds, etc. it raced back in Trans Am's glory days. We reckon our feature car's good enough for Gurney, himself. Check it out and see if it's good enough for you. too.

Price:$25,990
0-100 kph:About 9 seconds
Best point:Top sights & top sounds
Worst point:Top dollar for some spares
Recommendation:One Cougar, thanks!
Trivia:In the 1967 Trans Am year, the success of the factory team convinced other privateer outfits to take to the track in Cougars, one of them being none other than our own Allan Moffat. 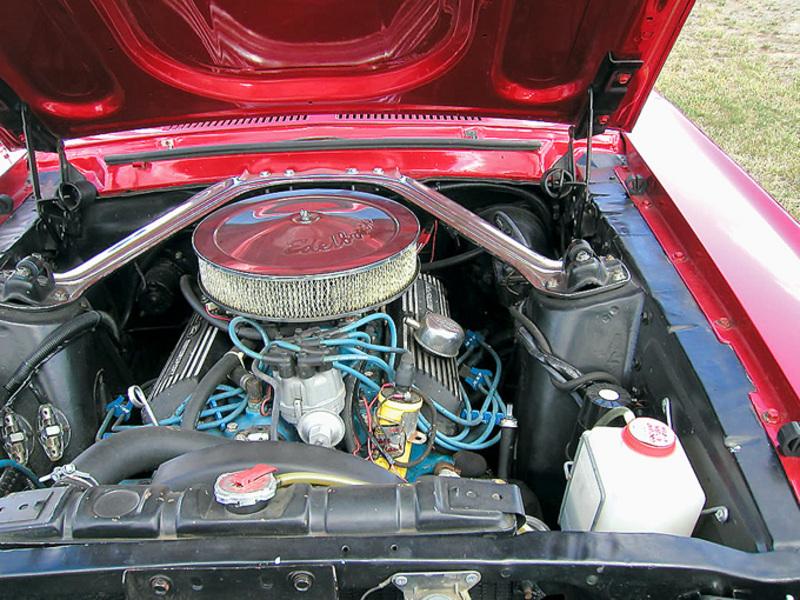 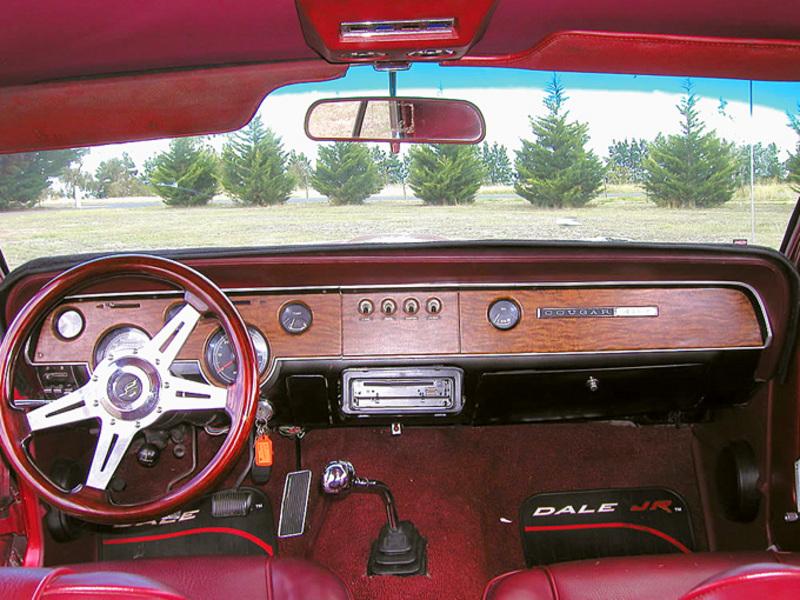 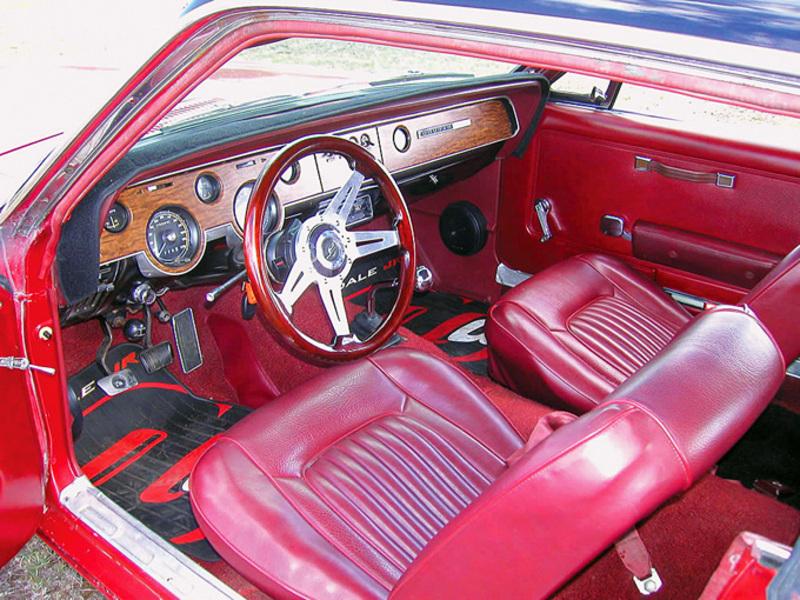 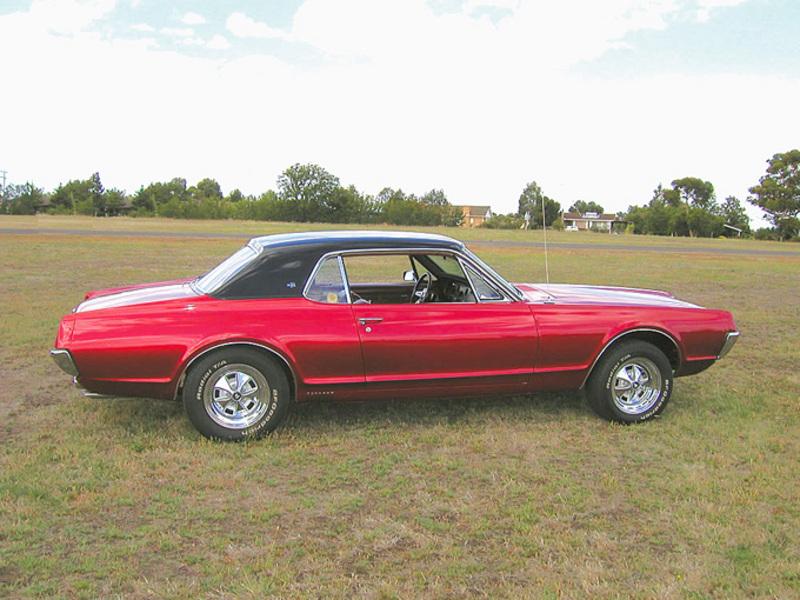