There’s no doubting that Chevrolet’s Corvette is one of the most popular collectable cars going around. Like Ford’s Mustang or a ’57 Chev, it seems the passion for the all-American sports car is both broad and deep.

For the passionate ‘Vette aficionado, nothing else will do, but even amongst more general fans of classic American cars, owning a Corvette, like a Mustang, T-Bird or a Cadillac, is one of those boxes that just needs to be ticked!

A look through the pages of JUST CARS, or online at justcars.com.au, will prove the Corvette’s popularity, with plenty out there for prospective owners to choose from. For passionate ‘Vette fans, there’s also a bevy of owner’s clubs located throughout Australia.

Phil Wallings is one of many such Aussie Corvette fans, and has a passion for the fibreglass-bodied sports that was realised when he came across the immaculate example pictured here.

Like many other Corvette owners, Phil’s passion for the Corvette is singular: no other classic will do.

Phil was also singular in knowing the type of Corvette he wanted. From the ‘C3’ (ie. third generation) era, he was particularly after a 1975 model. This is something of an unusual choice, but with the quantity of C3 ‘Vettes around, there was a bigger pool to pick from in order to ensure he found a good one – and find a good one he did.

“Forever, I’ve had a Corvette passion,” Phil said, laughing as he recalled the contrast between this bold orange Corvette and the first car he bought as a young man – a 1968 Mini Deluxe!

“I especially like the 1975 model with the small rear window and the colour-coded bumpers.”

After scouring far and wide for the ideal example, what looked like a winner was found online in 2009 in the form of a low-kilometre 1975 L48-spec Corvette coupe in Orange Flame with a black vinyl interior.

“That colour – Orange Flame – is not common and was a big attraction. The condition of the car was immaculate overall and very original.”

The car looked good and proved to be good. With only one previous owner here in Australia, Phil’s new ‘Vette was showing 35,500 miles on the odometer when purchased, which given the matching numbers drivetrain and overall condition, was believed to be genuine.

The car hadn’t been messed with, either, which was another factor that drew Phil to the car.

Calm Amidst the Storm

While the broader American car market was in turmoil in the early 1970s, Corvette seemed to plough on unperturbed. Most other models from most other manufacturers, particularly full-sized and intermediate cars, plummeted in sales, but Corvette sales actually grew during this turbulent period. Put that down, in part, to the Corvette being a niche product that had an ongoing appeal and wasn’t subject to “fads” of changing buyer tastes.

Muscle cars had been the vehicles everyone wanted only a few years earlier. By the mid-1970s, the ‘personal luxury’ category was where the action was at. Ford had arguably kicked off the whole genre back in 1958 when they resized the Thunderbird from a two-seat sports roadster – and the Corvette’s only homegrown competitor – to a much larger four-seater with a dash of elegance and sophistication.

Buick followed with their Riviera in 1963, Oldsmobile presented a different take in the form of the front-wheel drive Toronado for 1967 and Chevrolet joined in with the Monte Carlo for 1970.

Personal luxury went mainstream in 1975, when the existing players were joined by the likes of the all-new Chrysler Cordoba (a huge success in its debut year), Dodge’s Charger SE, the new Ford Granada and its Mercury Monarch clone – all well-appointed, rich-looking mid-sized models. Cadillac even got in on the action midway through 1975 when they released a down-sized Seville – the smallest Caddy in decades and a surprise hit for the luxury marque.

While all this was going on, the American new car market was battling multiple firefronts in the form of much higher fuel prices in the wake of the 1973-74 OPEC oil embargo, increasing government mandates on safety and emissions, a national recession and rampant inflation.

Additionally, domestic automakers had to counter increasing competition from Japanese and other imported cars (despite a 10 per cent tariff imposed on all imports in 1971), as well as recalls related to their own poorly-built vehicles.

Some industry pundits put the Corvette’s continued growth down to a shift in its buyers. When the Corvette was as hot – or hotter – than many muscle cars of the late 1960s, it was a younger person’s car. By the mid-1970s, changes in emissions regulations had robbed the ‘Vette of much of the power that made it appealing to those buyers. Older customers weren’t so fussed about that; they just wanted a car that looked good, was fun and reasonably comfortable to drive.

More importantly, that older demographic could afford to buy and run a Corvette, too. In just a two year period between 1973 and 1975, that aforementioned inflation saw Corvette prices jump by 20 per cent – yet sales continued to rise.

You could psychoanalyse these trends much more deeply, but suffice to say, the Corvette buying demographic had changed and as such, America’s only production sports car sailed on. 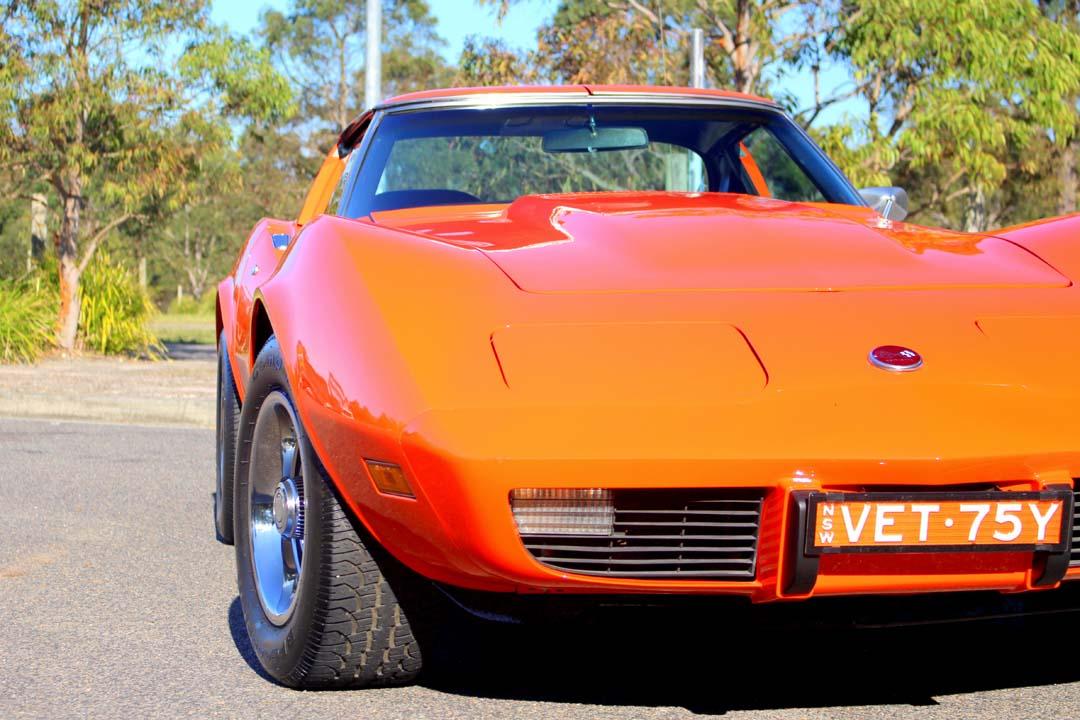 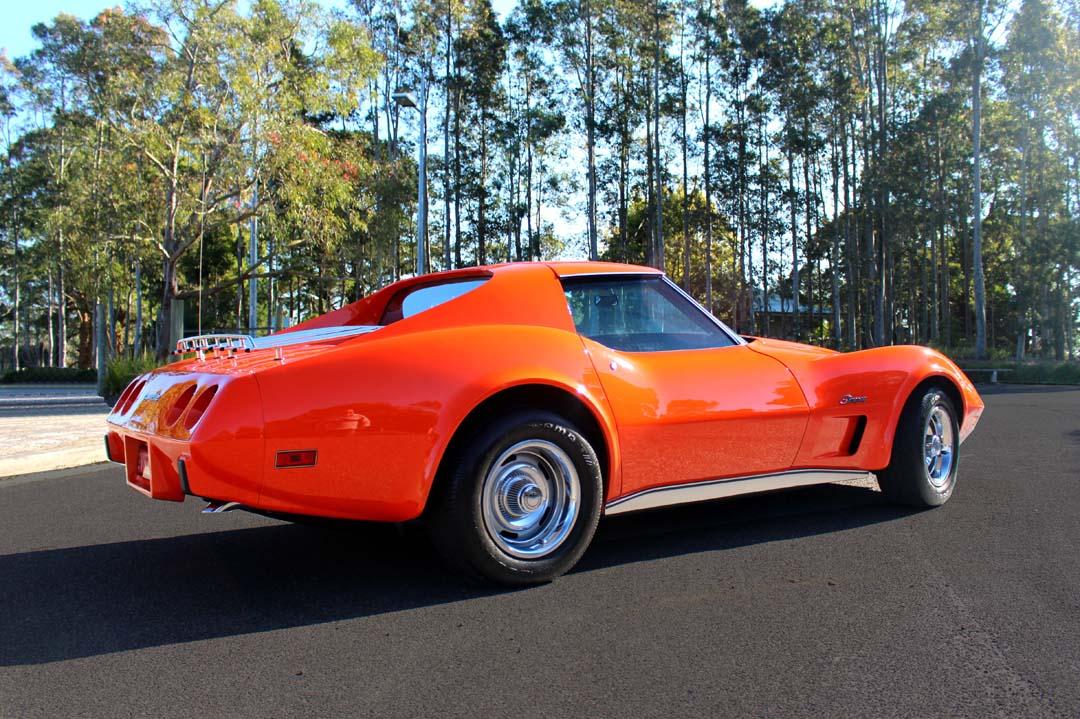 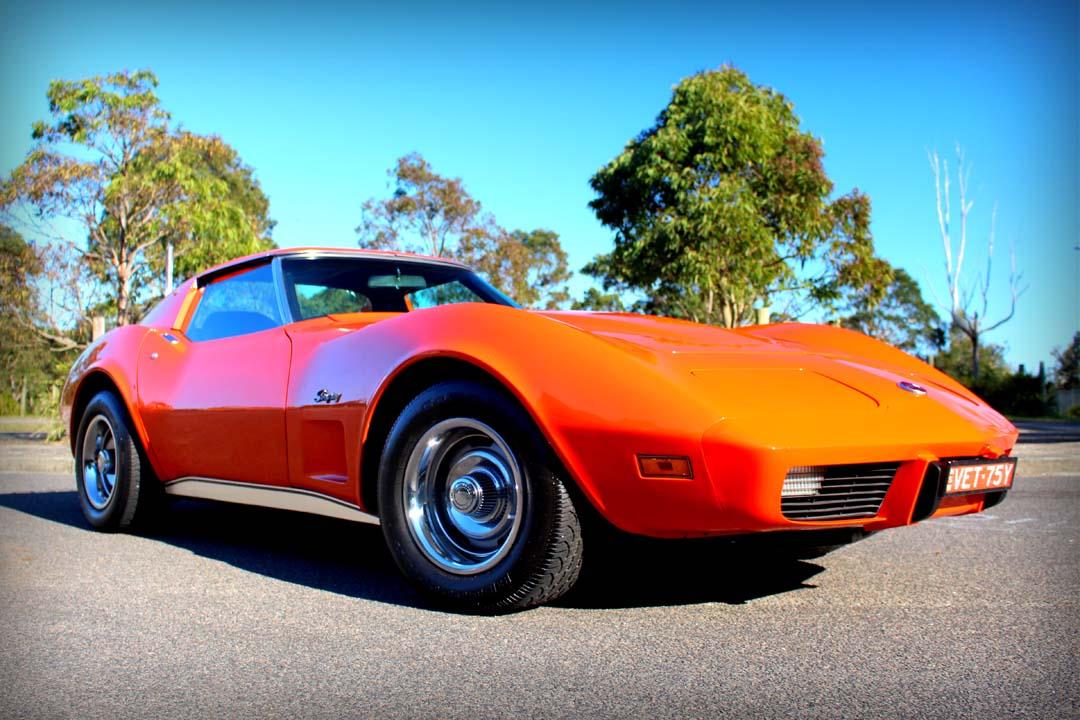 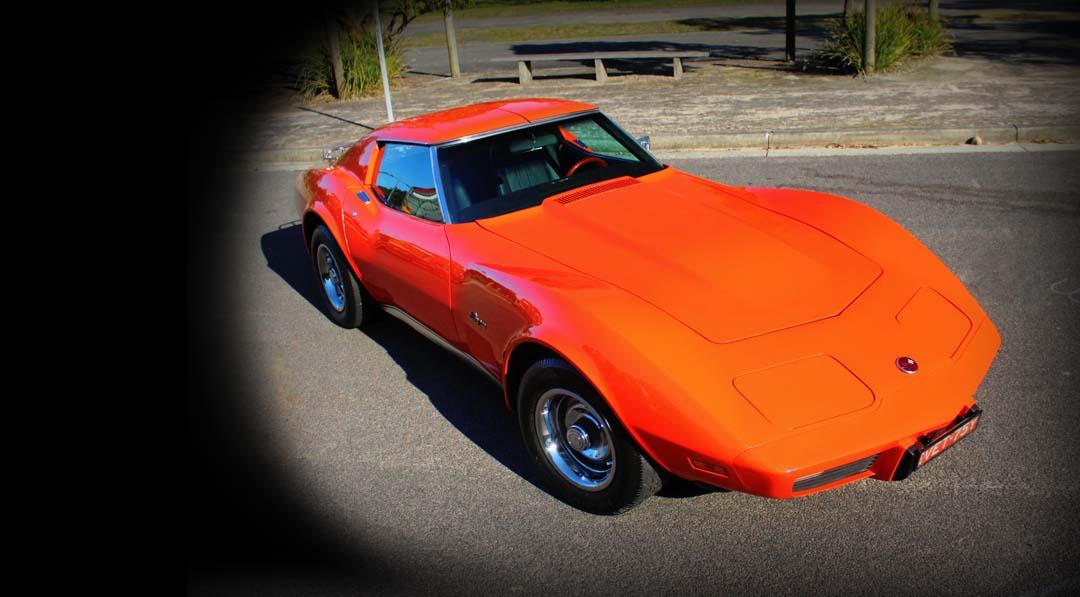 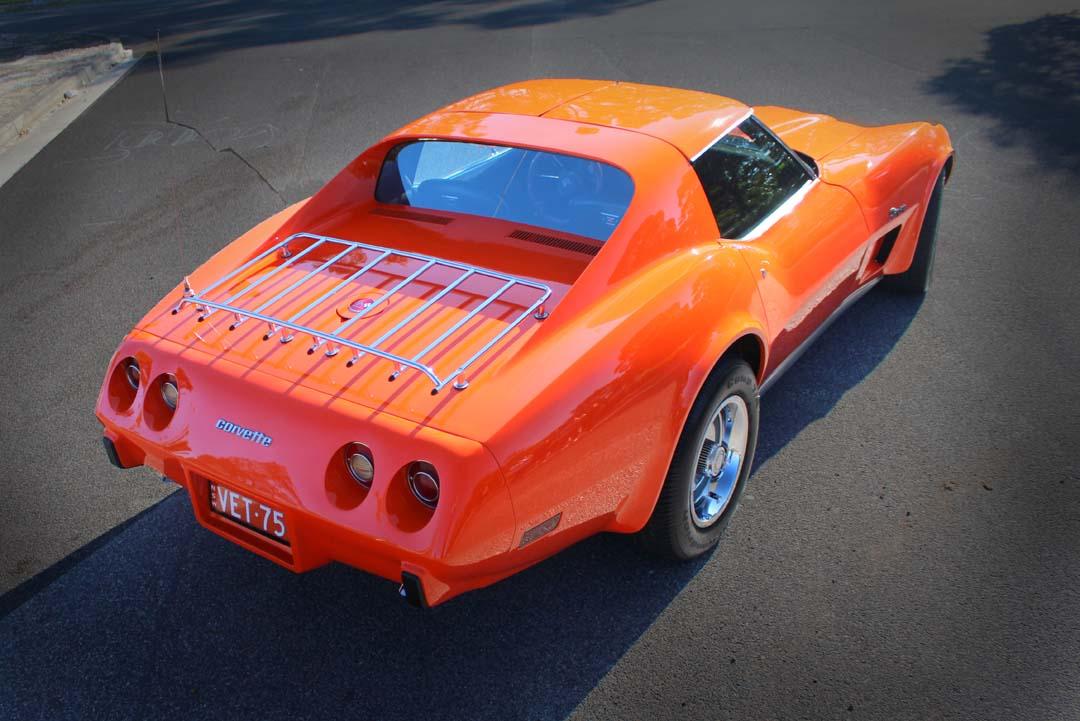 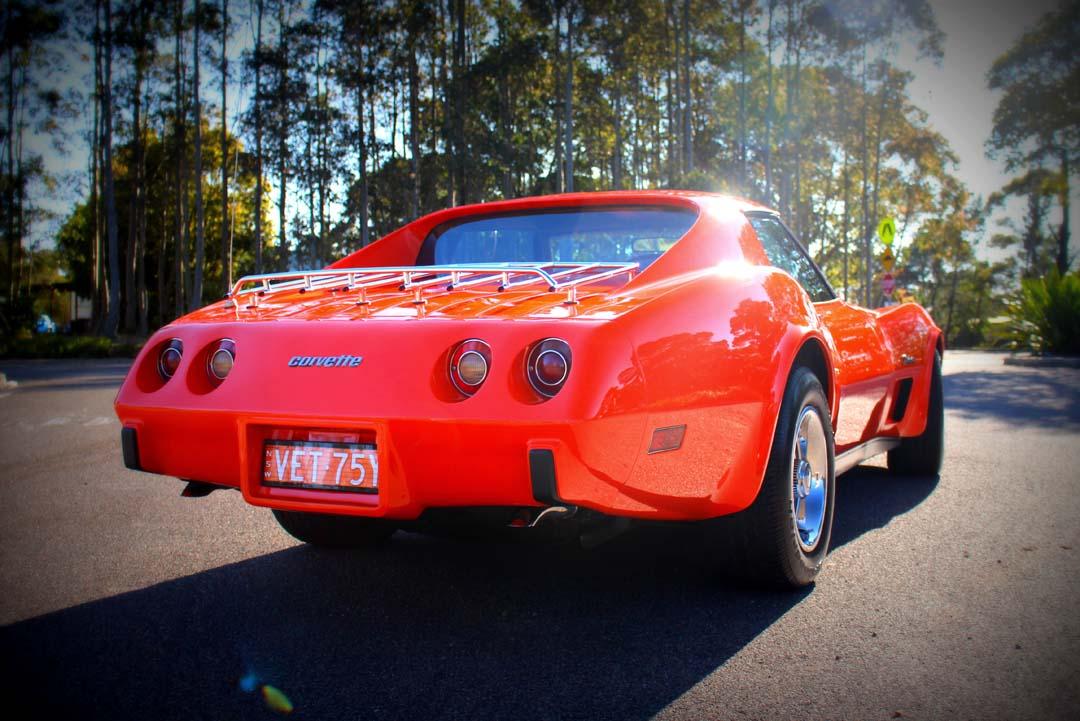 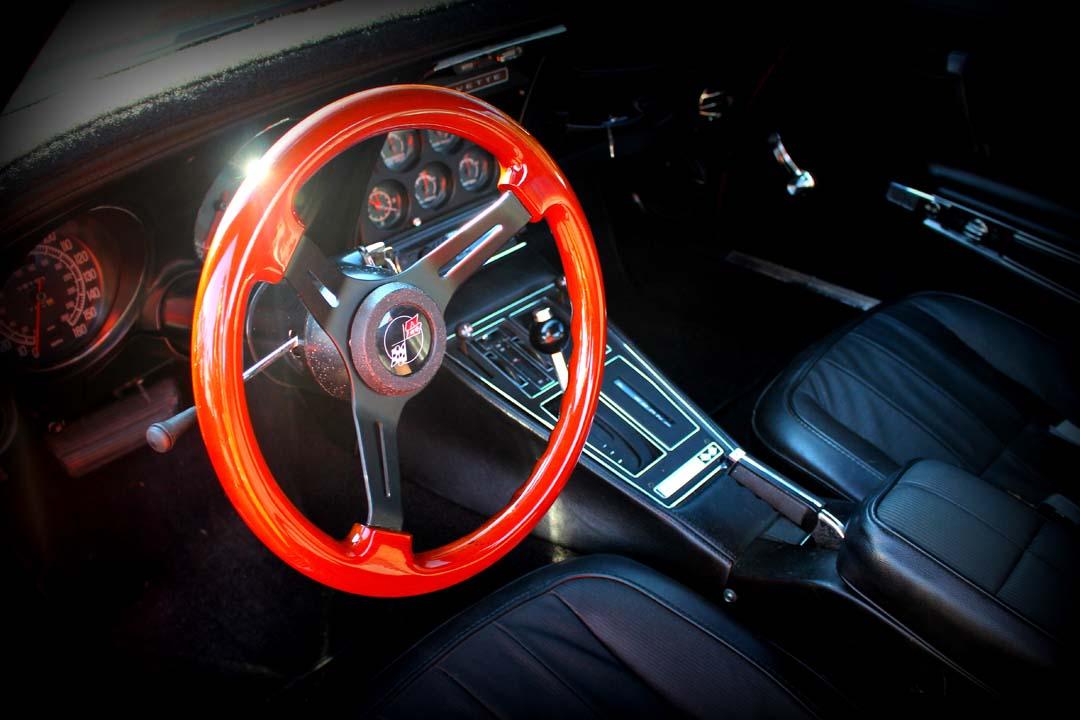 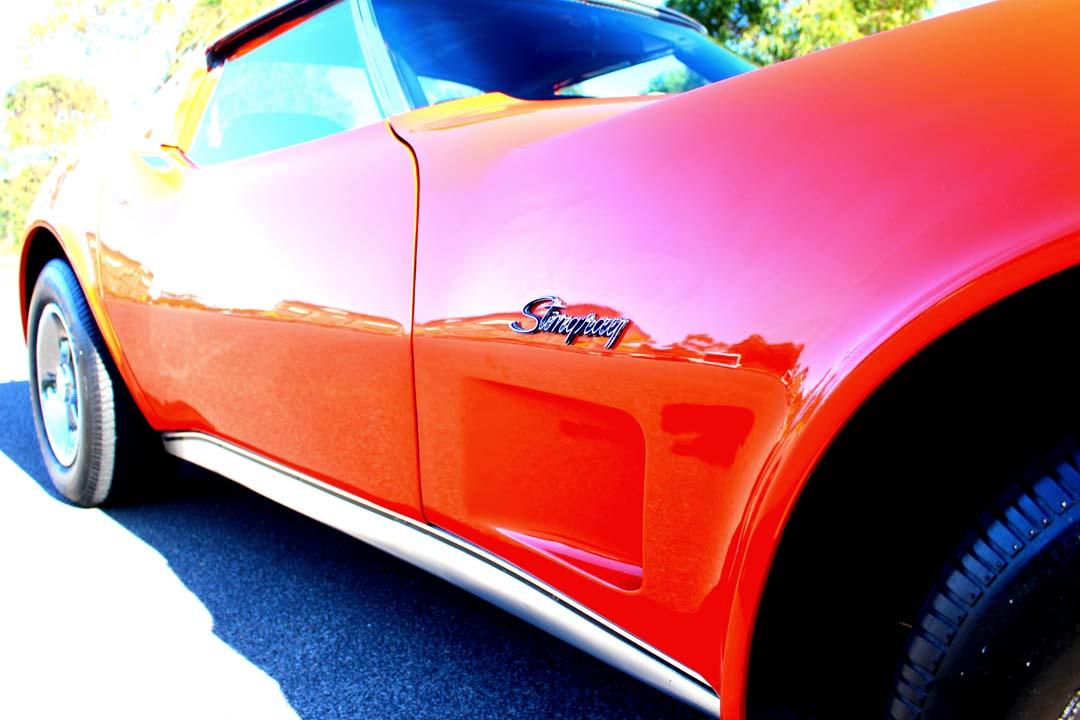 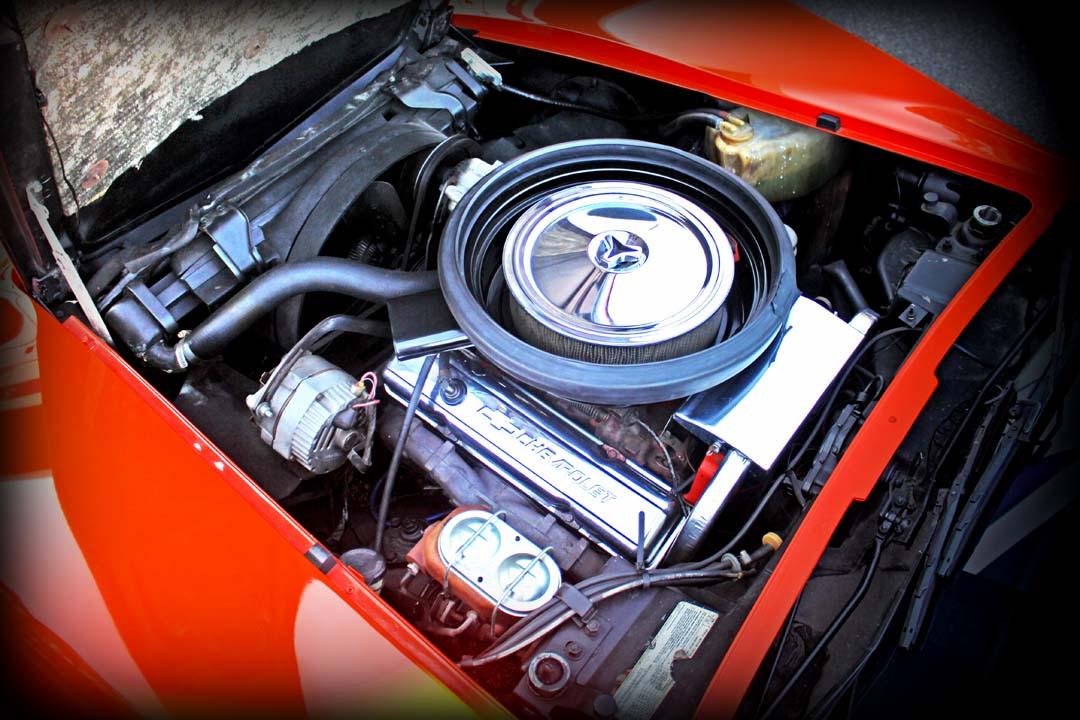 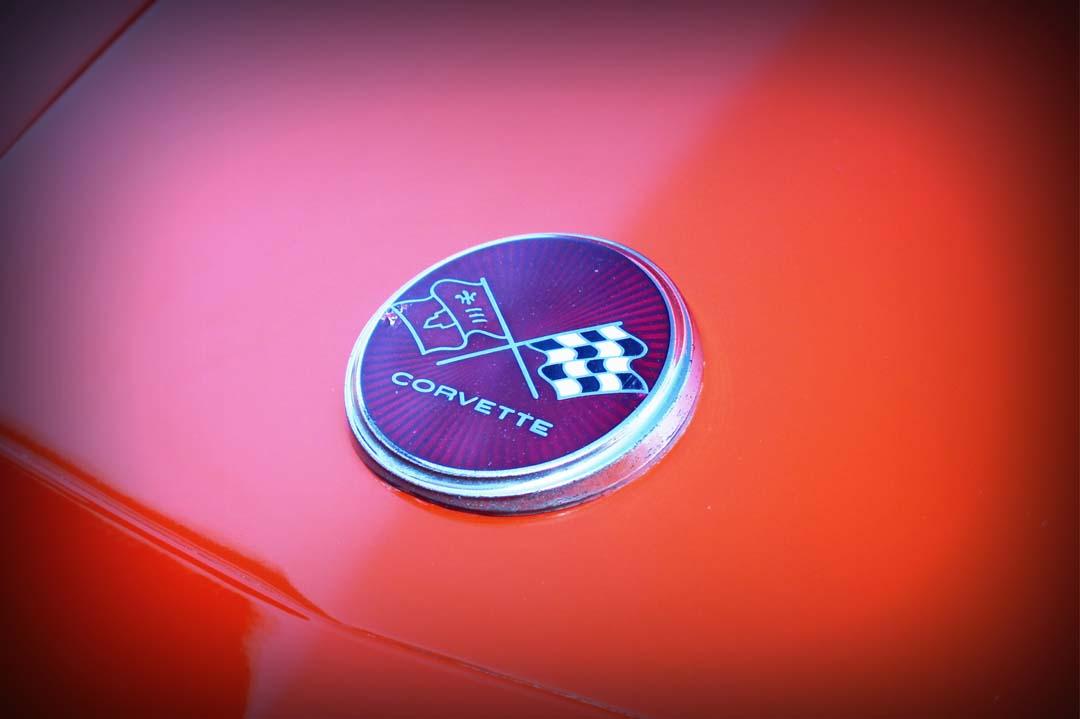 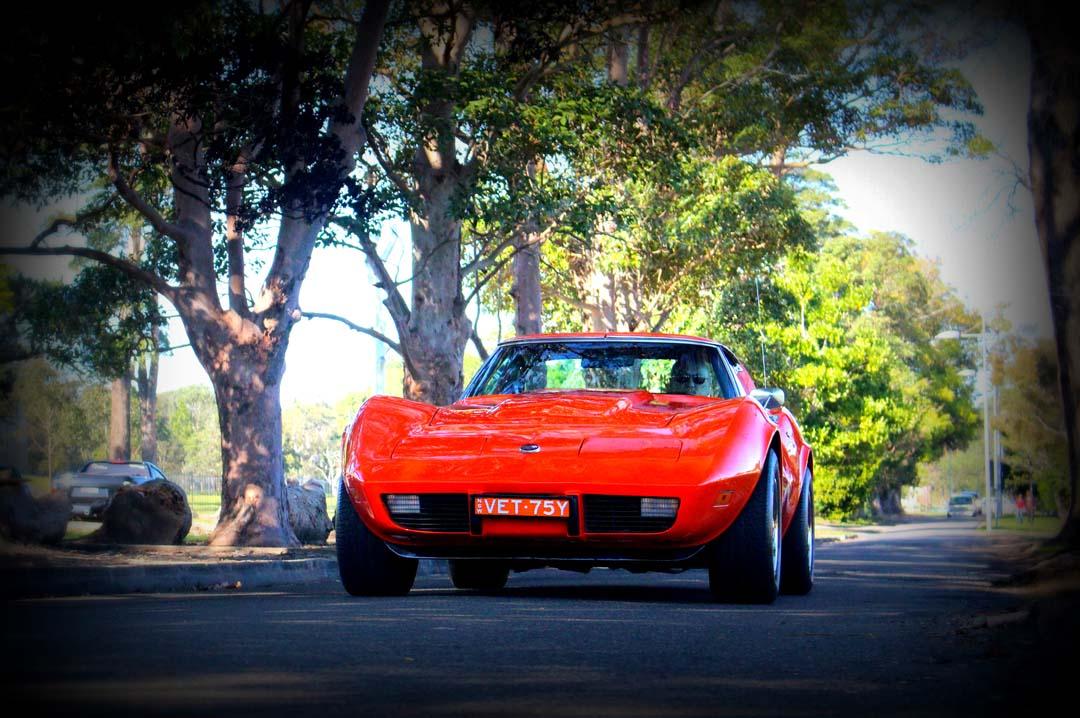 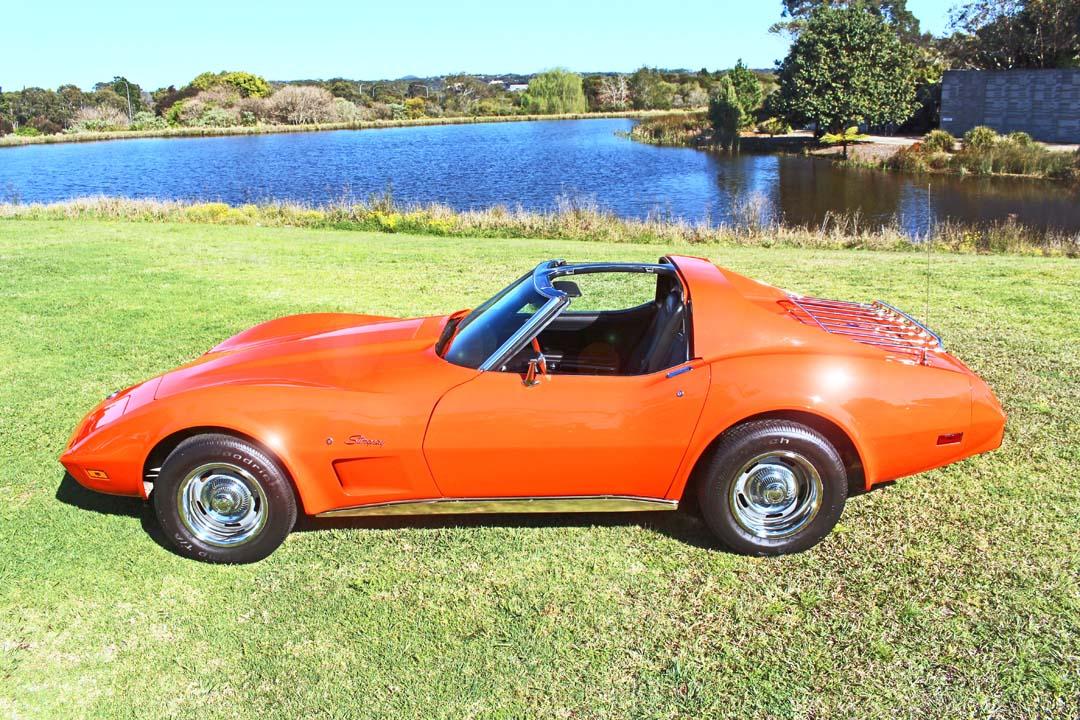 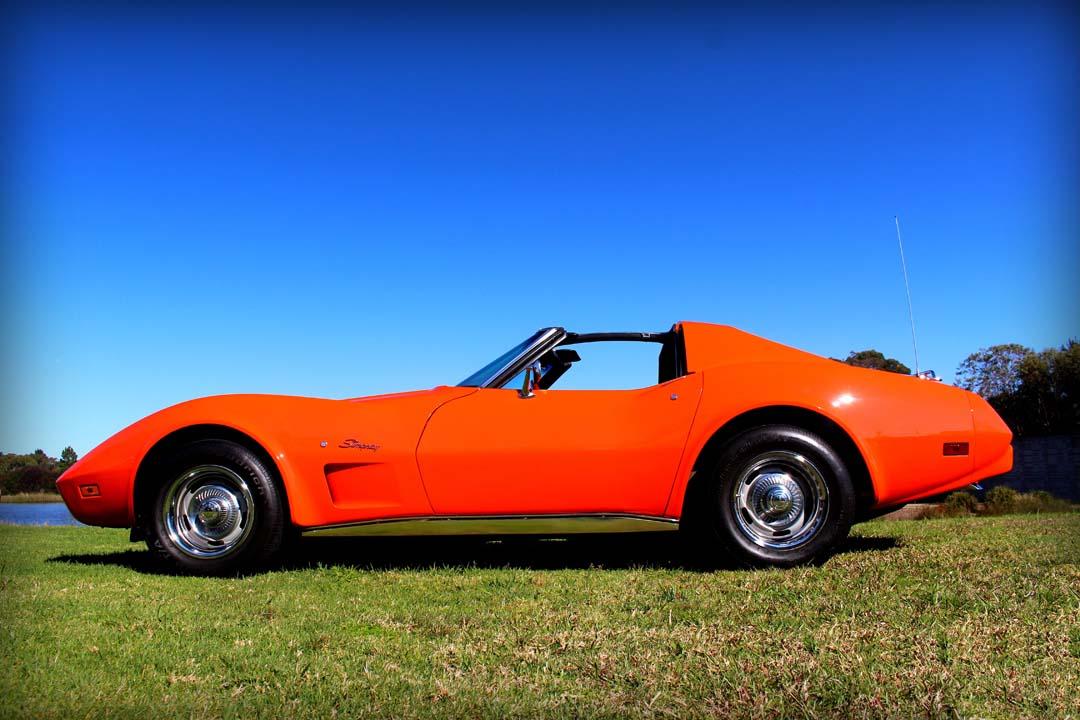 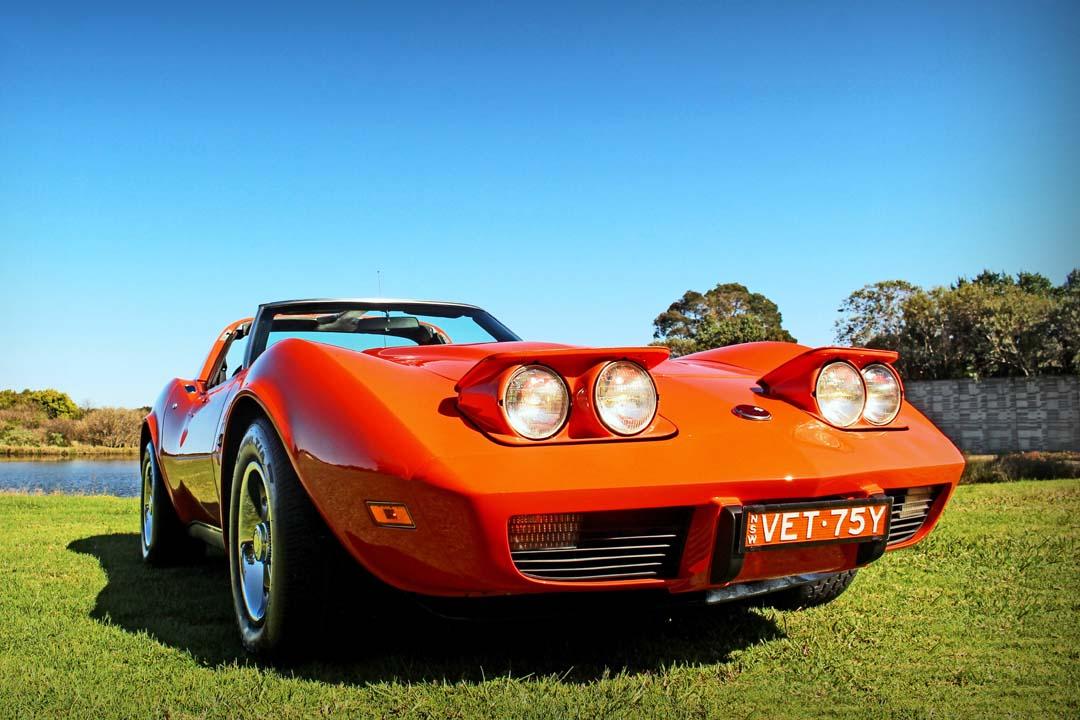 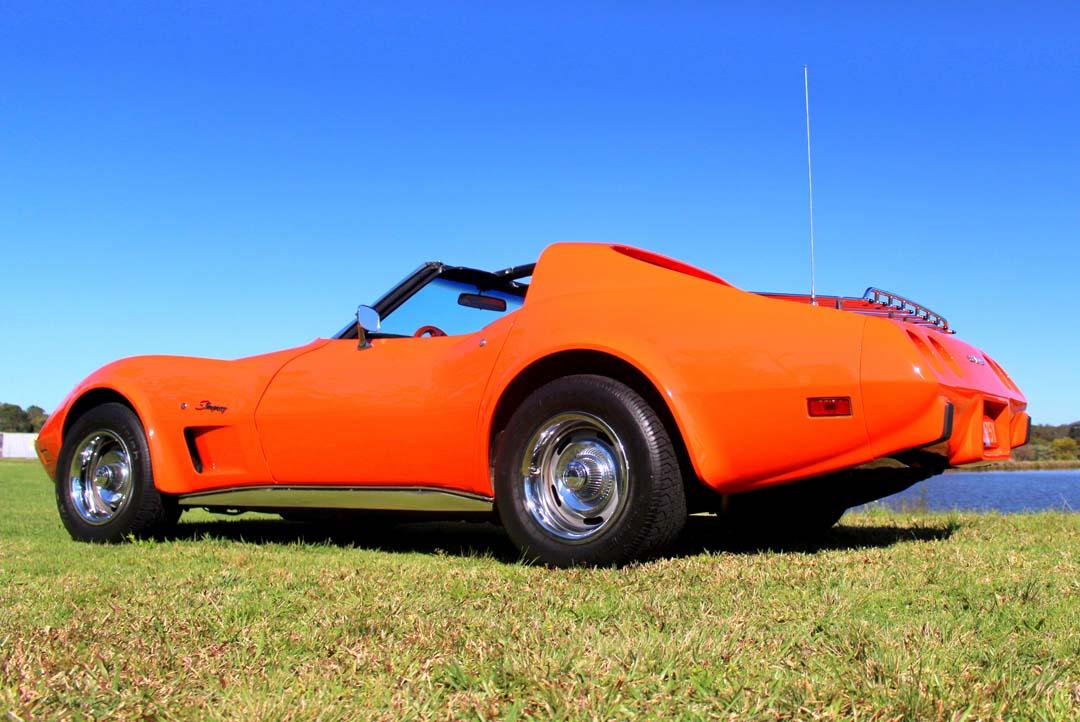 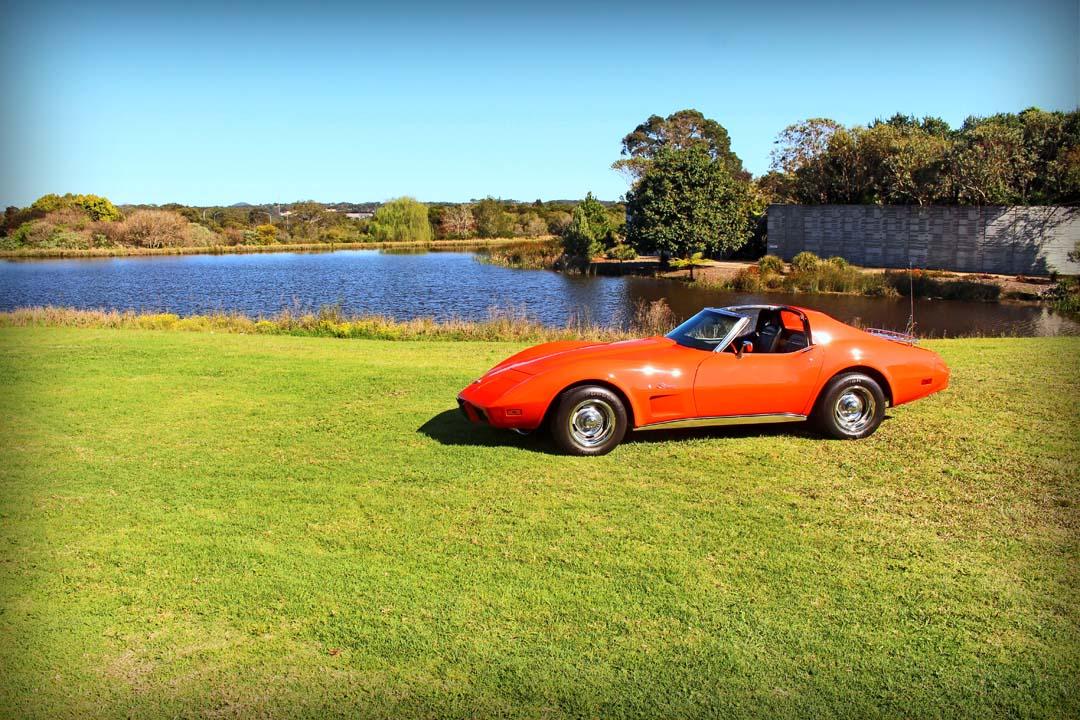 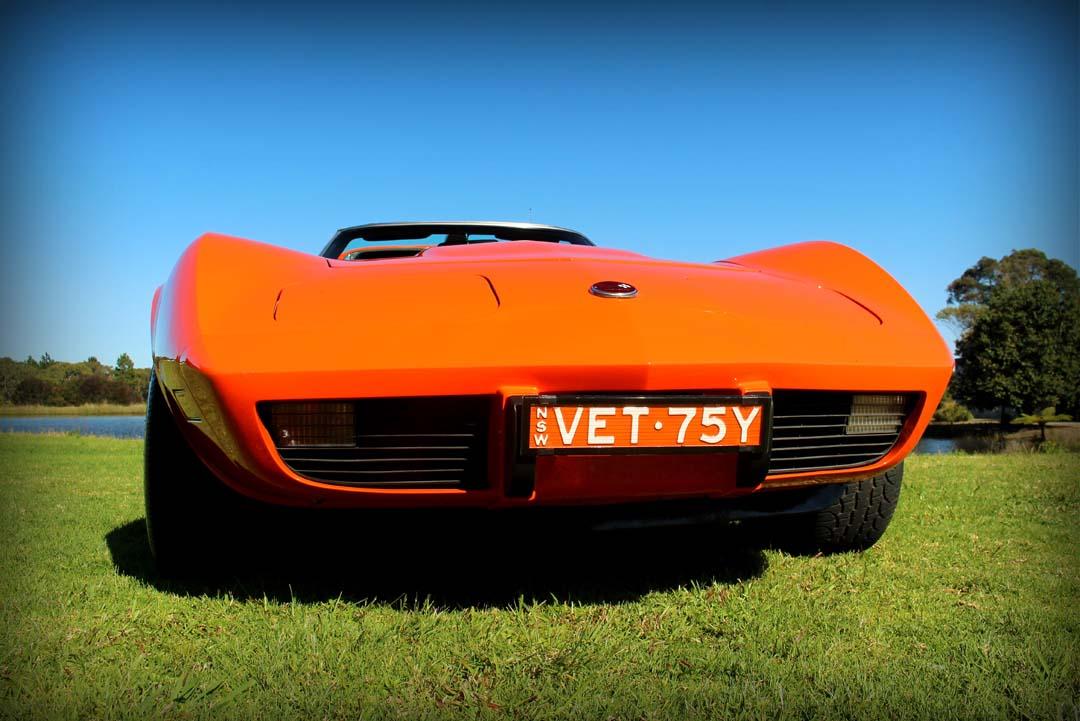 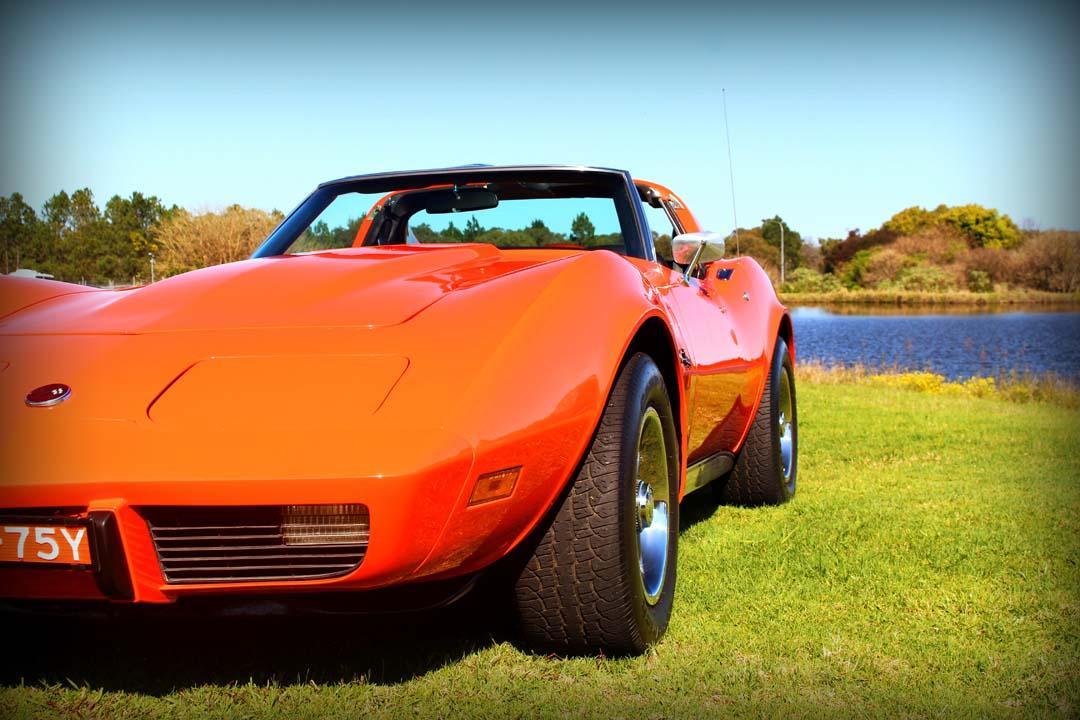 When Phil’s Corvette coupe first rolled out of a dealer’s lot in 1975, it was one of 33,836 to do so for that model year.  Convertible production during the same period was just 4,629 and marked the last year a ragtop Corvette would be offered on the C3 platform.

Externally, there’s little to pick the ’75 Corvette from its immediate predecessor, but a few subtle changes were there. The federally-mandated energy-absorbing bumpers incorporated small overriders at each end for ’75, while the rear bumper was now a one-piece design without the vertical seam. Both urethane-coated units were redesigned under the skin, to better absorb low-speed impacts.

Due to increasing emissions regulations, the range of V8 engine options that had been a staple of the Corvette since 1957 were being progressively cut back. High compression engines had been discontinued after 1970 and the 454ci big block was dropped at the end of the 1974 model year. That left buyers with a choice of the standard 165hp (123kW) 350ci V8, like the unit factory-fitted to Phil’s car, or a 205hp (153kW) version of the same engine. These were known by model codes L48 and L82, respectively.

Regardless of engine choice, a new, more reliable High-Energy ignition was applied to the Corvette (and most other Chevrolet models that year), a new fuel cell was standard and performance-sapping catalytic converters were introduced across the board.

Suspension was the same pattern as that used on the C2 Corvettes of a decade earlier, namely parallel A-arms with coil springs up front and a three-link independent rear with transverse leaf spring. But at least the shocks and springs were improved for ’75 and the transverse rear spring now carried ten leaves.

Standard wheels were 15-inch steel Rally rims, but there was a choice of tyres, while 11.75-inch disc brakes were factory-fitted at all four corners.

As the Corvette buyer changed in the 1970s, so too did their tastes when it came to colour. When the C3 ‘Vettes debuted for 1968, British Green and Le Mans Blue were the most popular choices. On the 1975 models, Classic White was the favourite, followed by Silver; reflecting the conservative choices of a more mature demographic.

These days, all surviving C3 Corvettes seem to be red, but they accounted for only 20 per cent of the total 1975 production. The Orange Flame paint that Phil found so appealing was requested by less than 10 per cent of buyers in 1975 – on a par with Bright Yellow and Bright Blue in terms of popularity.

Inside, vinyl-trimmed seats were standard, available in a choice of six colours, while optional leather trim could be had in three shades.

An interesting touch for ’75 was a speedometer that showed both mph and kph. Mph was more prominent than kph on US-market Corvettes, while the reverse was true for Canadian-delivered Corvettes.

The options list for ’75 ran to more than two dozen items, including the expected things like power windows, suspension upgrades and air conditioning, but surprisingly, an AM-FM radio, power brakes, power steering and even a front number plate mount were extra-cost options.

Phil’s Corvette is largely standard from nose to tail, with the only notable factory-fitted option being the three-speed auto.

While more of a sedate tourer than an outright performance car, an L48-spec Corvette like this one is still capable of sub-8-second 0-100km/h times and a top speed close to 200km/h.

Since purchase, Phil’s tidied up some of the interior trim, added a Corvette-branded steering wheel and fitted a more modern Pioneer sound system. Aside from that and some engine dress-up parts that were on the car when purchased, it’s untouched.

A regular care and maintenance routine includes thorough cleaning, while the car sleeps under multiple blankets when not in use, which explains why it looks so good and draws attention whenever Phil takes it for a run.

“I’ve become known in the area for my lovely Corvette,” Phil laughs. “I attribute that to the unique colour and the condition of the car. It has fantastic street appeal and is a magnet for people’s eyes.”

With Phil now putting the car on the market (see breakout), there’s a chance to bring that appeal to your street.

Like I said earlier, a Corvette is one of those cars that every serious car buff should own at least once in their lives. Maybe that time is now and that car is this one!