"The 2008 Mustang Bullitt embodies the true spirit of the 1968 movie car," said Derrick Kuzak, group vice president, Global Product Development. "Like the original Bullitt, this car dials the driving dynamics up a notch for Mustang enthusiasts who love the performance, handling and the sweet sound of Ford power that only Mustang can deliver." The launch of the limited edition 2008 Mustang Bullitt coincides with the 40th anniversary of the release of the Warner Bros. film that gave the original car its name. In the movie, legendary actor Steve McQueen drove a Highland Green 1968 Mustang GT 390 that gained cult status among Mustang enthusiasts, thanks to a seven-minute chase scene that film and car buffs alike believe is one of the best ever.

This isn't the first time the iconic Bullitt has been revived, though. Back in 2001, a similar Bullitt limited edition (of 6,500), with colour & styling cues from the original, was made available. For the 2008 Bullitt, Ford engineers have fine tuned the new Mustang's chassis and suspension, and added a live rear axle that uses a unique 3.73:1 gear ratio that helps launch the Bullitt with vigour. Under the bonnet, the 4.6-litre V-8 delivers 315 horsepower at 6,000 rpm and 325 pound-feet of torque at 4,250 rpm. Engine calibration is designed to increase throttle response for a snappier acceleration feel. The redline has been boosted by 250 rpm to 6,500, with top end speed bumped to 151 miles per hour. Gears are selected via a Tremec 5-speed manual, and the shifter is topped with a specifically designed polished aluminium shift ball.

The car features the first use of an open element air filter in a factory produced, fuel-injected Mustang. Inspired by Ford Racing, the intake is tucked neatly behind the driver side headlamp, mounted in a specially tooled up air box. The custom-designed exhaust system continues Mustang's traditional use of a true dual-exhaust, with a new H-pipe specifically developed for Bullitt. The mufflers, featuring larger 3.5-inch chrome tips, are tuned to minimise back pressure, maximise horsepower and provide a powerful exhaust note in the spirit of the 1967 original.

Did You See That? - The chase scene in Bullitt took more than two weeks to film, resulting in 9 minutes and 42 seconds of edited footage that helped Frank P. Keller earn an Academy Award for Film Editing. Filming in a working city, with locations spread out over a considerable part of San Francisco, helped generate a number of continuity lapses that are either overlooked or celebrated by Bullitt aficionados. Audiences are tipped off when a green Volkswagen and other cars appear several times. The Dodge Charger driven by the villains loses no fewer than eight hubcaps during the chase.

Safety First - Steve McQueen (and stunt drivers) buckled up before racing the Highland Green 1968 Ford Mustang GT 390 at speeds of up to 110 mph along the streets of San Francisco. Concerned residents along the route reportedly called the San Francisco Police Department and City Hall during filming of the jump sequence. Some say the San Francisco authorities were led to believe the cars wouldn't exceed speeds of 35 mph! 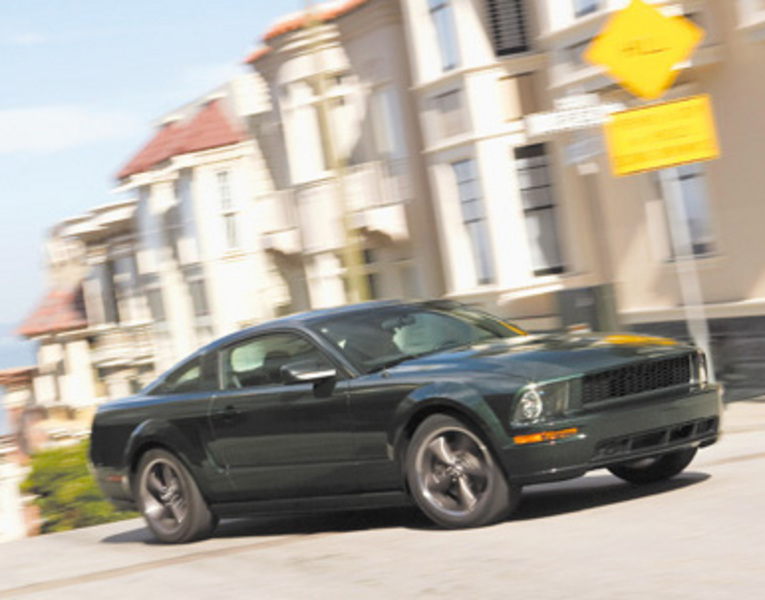