More-power, movie-themed, limited-edition Mustang Bullitt might just be the best Mustang you can buy in Australia. 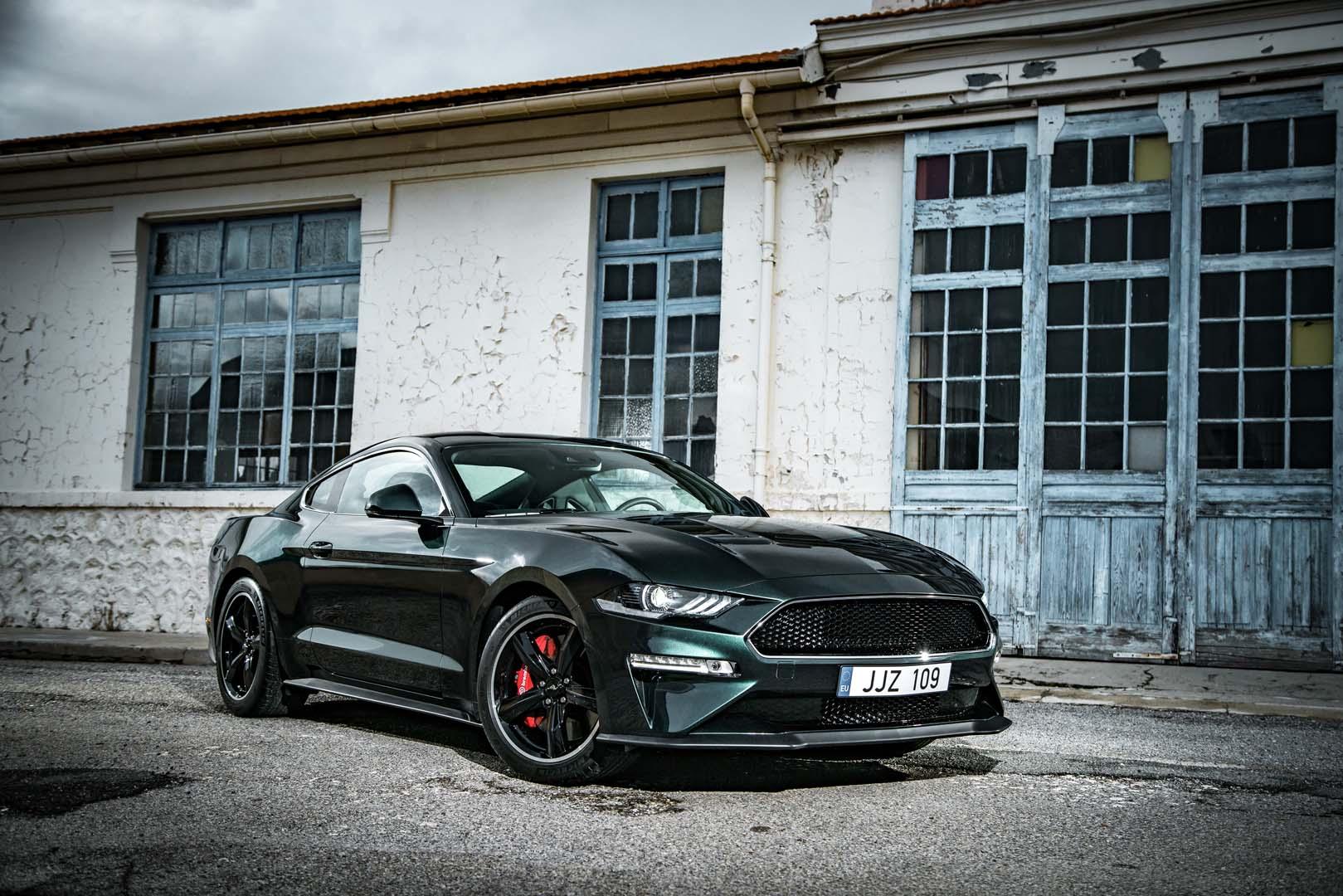 You’ll have seen people wearing t-shirts promoting their favourite TV show or movie. And there are those who have movie posters on their walls at home. Some collect figurines. And so on, and so on.

Well, now you can have the ultimate movie-inspired limited-edition Ford Mustang…this is fan gear for movie and car fans alike. Yep, the Ford Mustang Bullitt on the surface might seem like a silly homage and it would have been if it was a mere cosmetic job. Thankfully Ford went a little deeper.

For those who don’t get the meaning of ‘Bullitt’ allow me to enlighten you. It’s named after a Steve McQueen character in a movie of the same name. From about 50 years ago. That movie spawned one of cinemas greatest car chases, if not the greatest. It made McQueen’s Highland Green Mustang a legend and has meant we’ve remembered a fairly ordinary film.

So, let’s get into this. 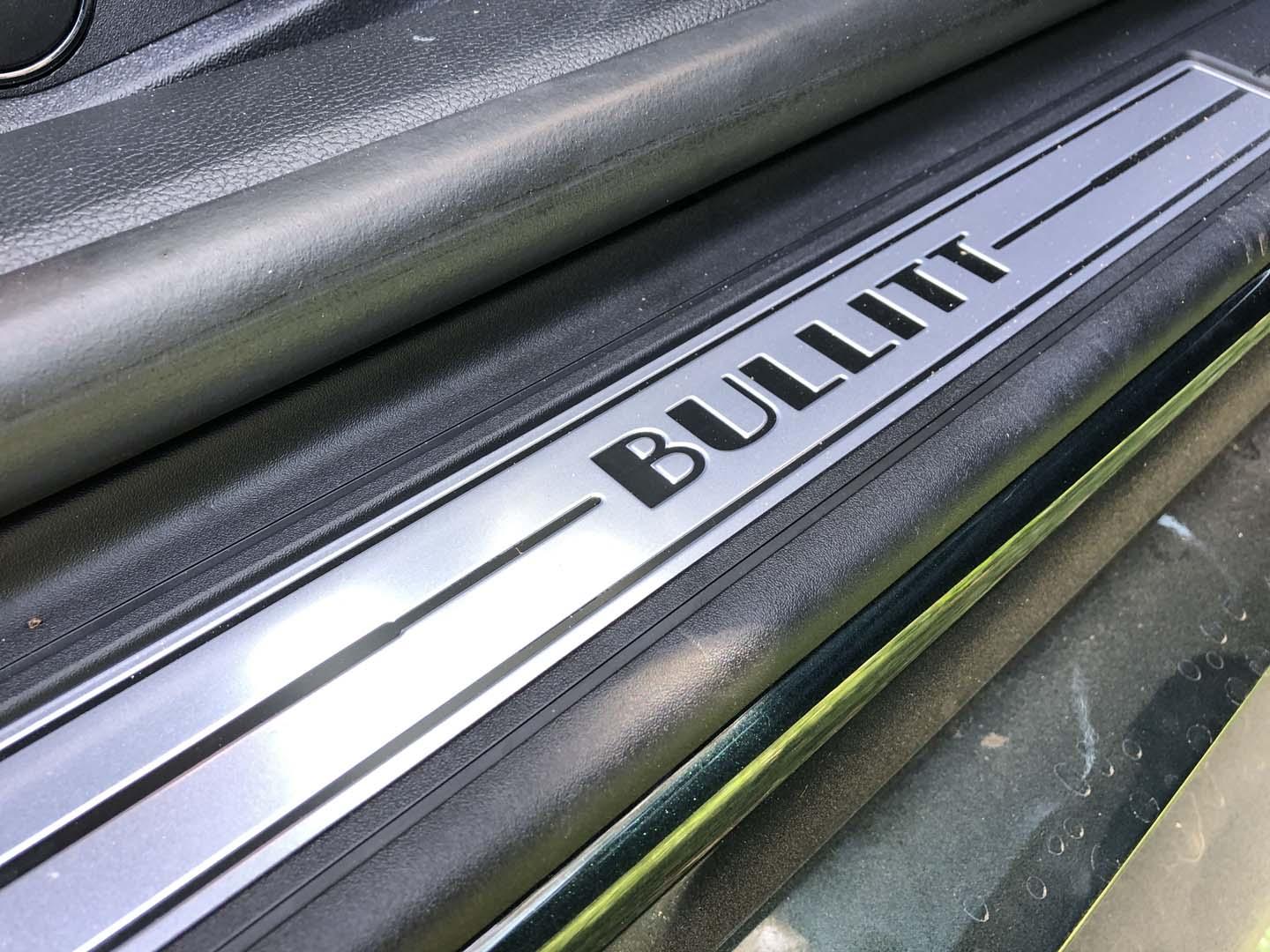 How much does the Ford Mustang Bullitt cost and what do you get?
The Ford Mustang Bullitt is limited to just 700 cars in this country with prices starting at $73,688+ORC. The Mustang GT on which it’s based lists from $62,990+ORC in similar six-speed manual trim (the automatic-equipped GT lists from $65,990+ORC). But the Bullitt is more than just a cosmetic pack, as I’ve already mentioned.

Indeed, the Bullitt’s engine has been fiddled with a bit and makes a smidgen more power than the regular Mustang GT but we’ll come back to this shortly. And, while the GT can be had with either a 10-speed automatic or six-speed manual, Ford has decided, thankfully, that it doesn’t want millennials anywhere near the thing and so the Bullitt is available exclusively with a six-speed manual. 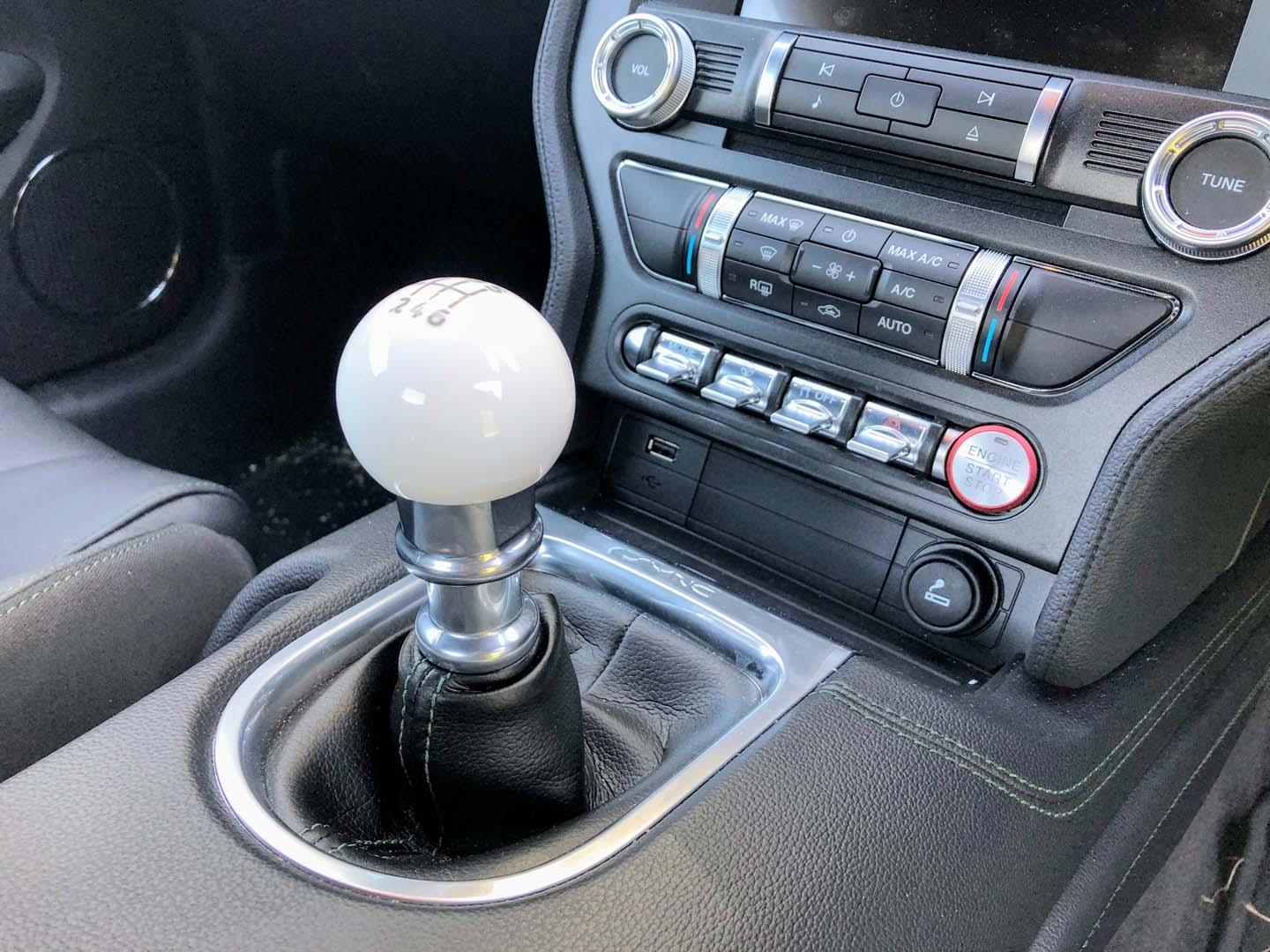 But, as Tim Shaw (my own reference to baffle millennials) said on numerous occasions, ‘but wait, there’s more’ the Bullitt also features Ford’s very excellent MagneRide adaptive dampers which are a cost option on the GT. Beyond this, there are a handful of Bullitt badges that I could live without, green contrast stitching on the inside of the thing which is cool, a numbered-build plate, a blacked out grille, black alloys that mimic those on the movie car and chrome trim around the window line for a bit of retro magic. Visually, this is the best-looking Mustang, in my opinion.

In terms of standard creature comforts, the Bullitt gets all the same gear as the Mustang GT, so dual zone climate control with a blower that in its top setting will blow a gale through the cabin to cool it down quickly (but it is almost so loud that it’ll drown out conversation), there’s a leather interior, infotainment with sat-nav and both flavours of smart phone connectivity.

So, as far as value for money goes, I think it’s hard to argue that Ford hasn’t got the price right in this instance. It’s less that $10k more than a manual GT, yet gets adaptive dampers a more-power engine and it looks way better than the standard car which, itself, is no shrinking violet. 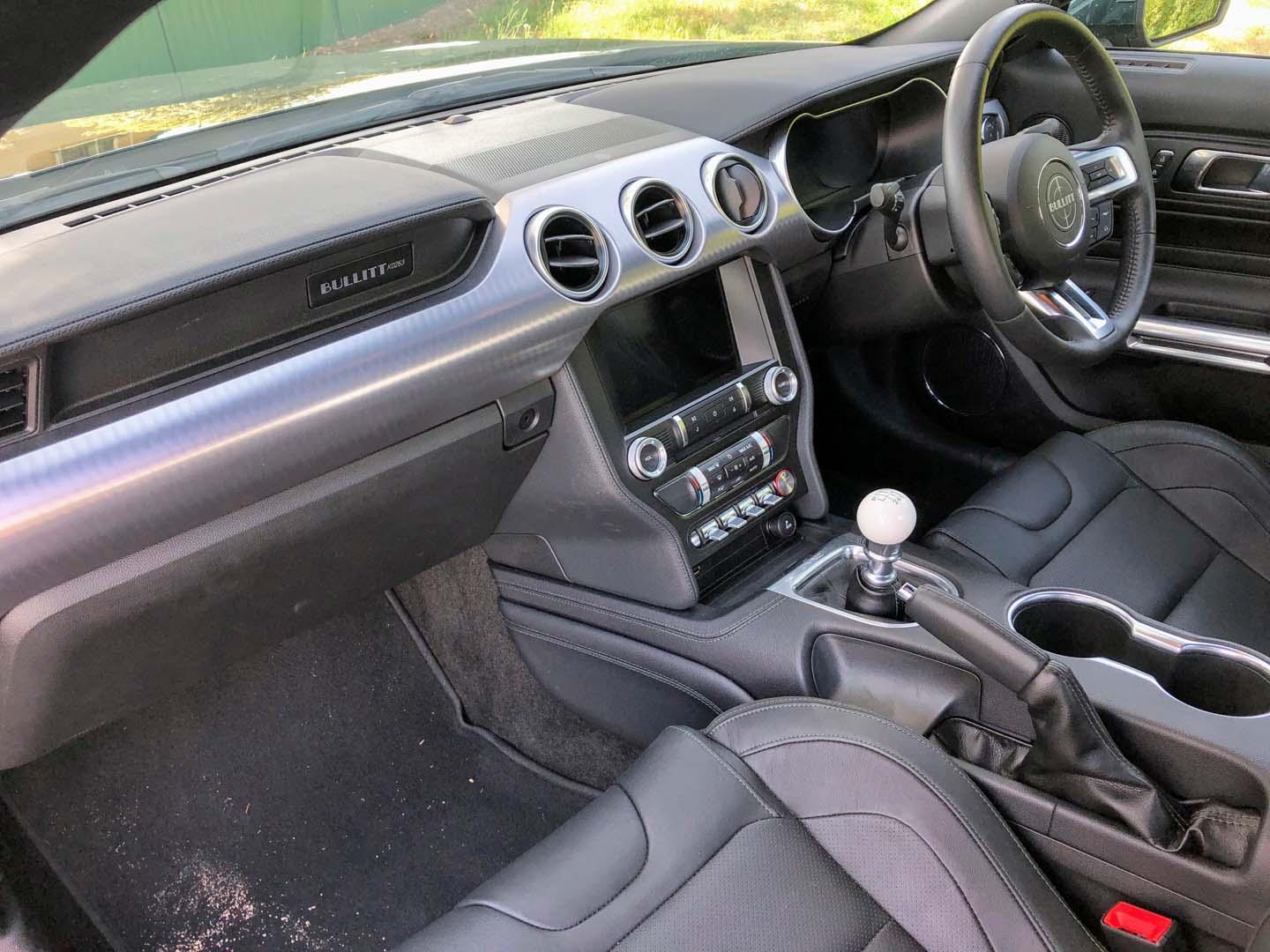 Plenty has already been written about the Mustang’s interior on Practical Motoring, so we’ll keep this bit brief and focus on the key elements. Build quality has never been a strong point on US-built cars and the Mustang was never any different, but that’s no longer the case. This revised Mustang, which arrived here last year, has copped plenty of soft-touch materials, nicer to look at materials.

But it’s not all great news. The handbrake is a hangover from the Mustang’s left-hand drive origins and is thus over on the passenger side of the vehicle, and it’s the same of the centre console storage bin which is hinged on the driver’s side and opened from the passenger side. First-world problems.

Climbing into the back is just about impossible for anyone over four-feet tall. You’ve got to slide the seat forward to be able to get your feet and legs in which isn’t the drama; the seat back which is manual tilt rubs against the roof of the car and thus won’t tilt far enough forward for an adult to climb easily into the back. And, once you do fall into the back you’ll find there’s no legroom. But the back is perfect-ish for kids…my daughter had plenty of room but she struggled to do up her own seatbelt as once you fit a booster seat it fouls the seatbelt receiver, requiring an adult to twist around from the front seat. And vision isn’t great out of the back with just a small quarter window and thick pillars.

It’s a different story in the front of the thing, though. The front pews are nice and comfortable, although the powered seat slide and manual backrest tilt is a bit odd. Given this thing’s US origins you’d expect the seats to be big and broad in the base but they’re not, they’re quite slim and grippy with support where you want it. There’s not a lot of adjustment for the steering wheel but getting comfortable behind the wheel isn’t an issue. And there’s reasonable vision right around once in the driver’s seat. 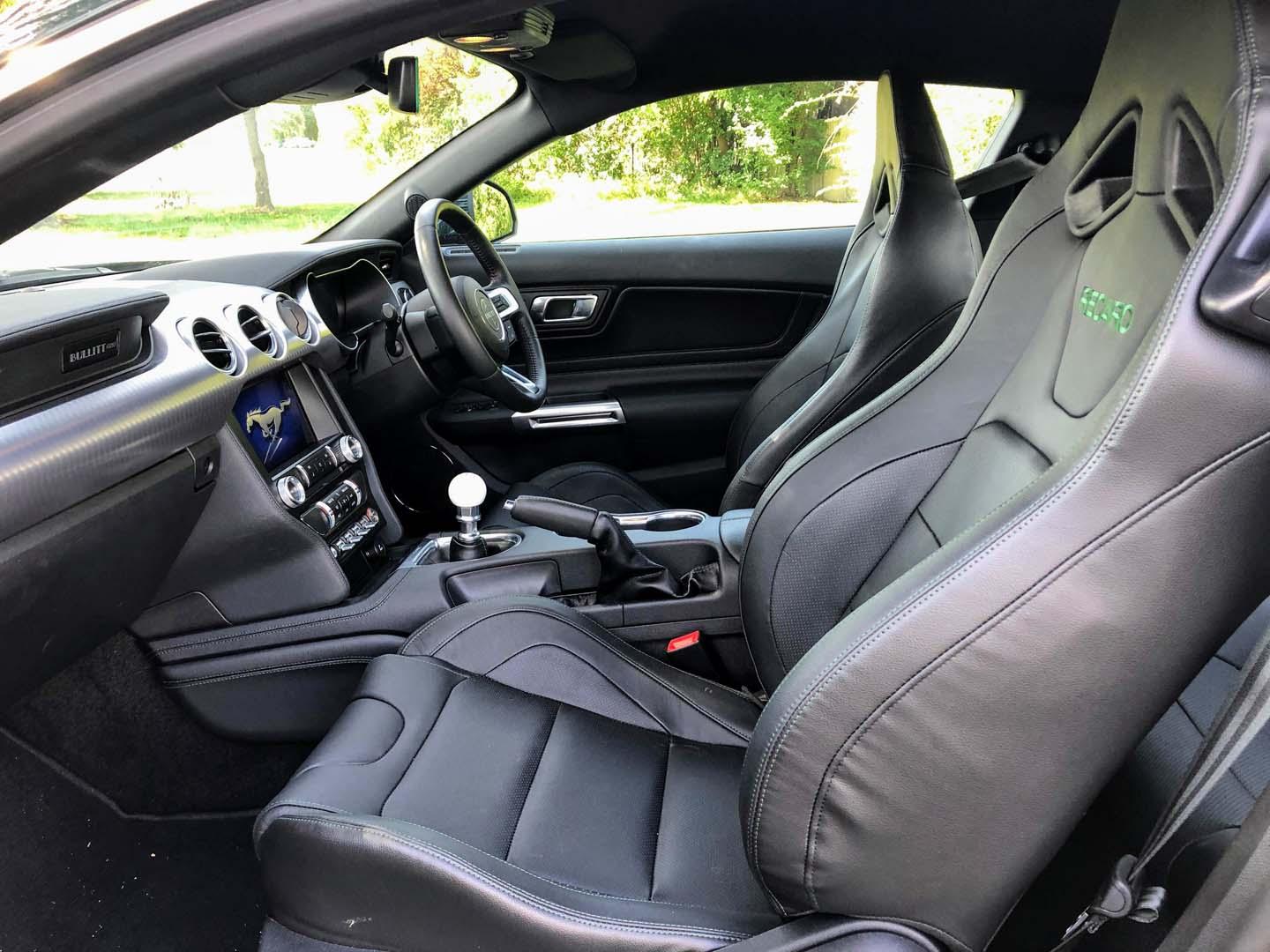 The boot is bigger than you’d expect offering 408 litres of storage space and there’s no spare tyre; only an inflation kit.

The Bullitt, as you’d expect, features the same digital instrument cluster as the regular Mustang and it’s fantastic with a depth and customisation that is impossible to plumb the depths of in a week of testing. The 12.0-inch display can be toggled between Normal, Sport and Race Track display types. The Mustang button on the steering wheel allows you to start exploring more of the car’s functionality and there’s a drive mode toggle switch too, although this only works in one direction. Meaning, if you miss your selection you’ve got to toggle all the way around again.

The centre stack is a more traditional type of layout with a mixture of large infotainment screen and physical controls for the climate control, volume and audio tuning dials and toggles for things like hazard warning lights, traction control, and more. It all looks good and works well but I’d prefer the fan control for the climate was a little bigger, or a dial. It’s a small switch that can be tricky to hit when on the move. That said, you can also control the climate settings via the infotainment screen. 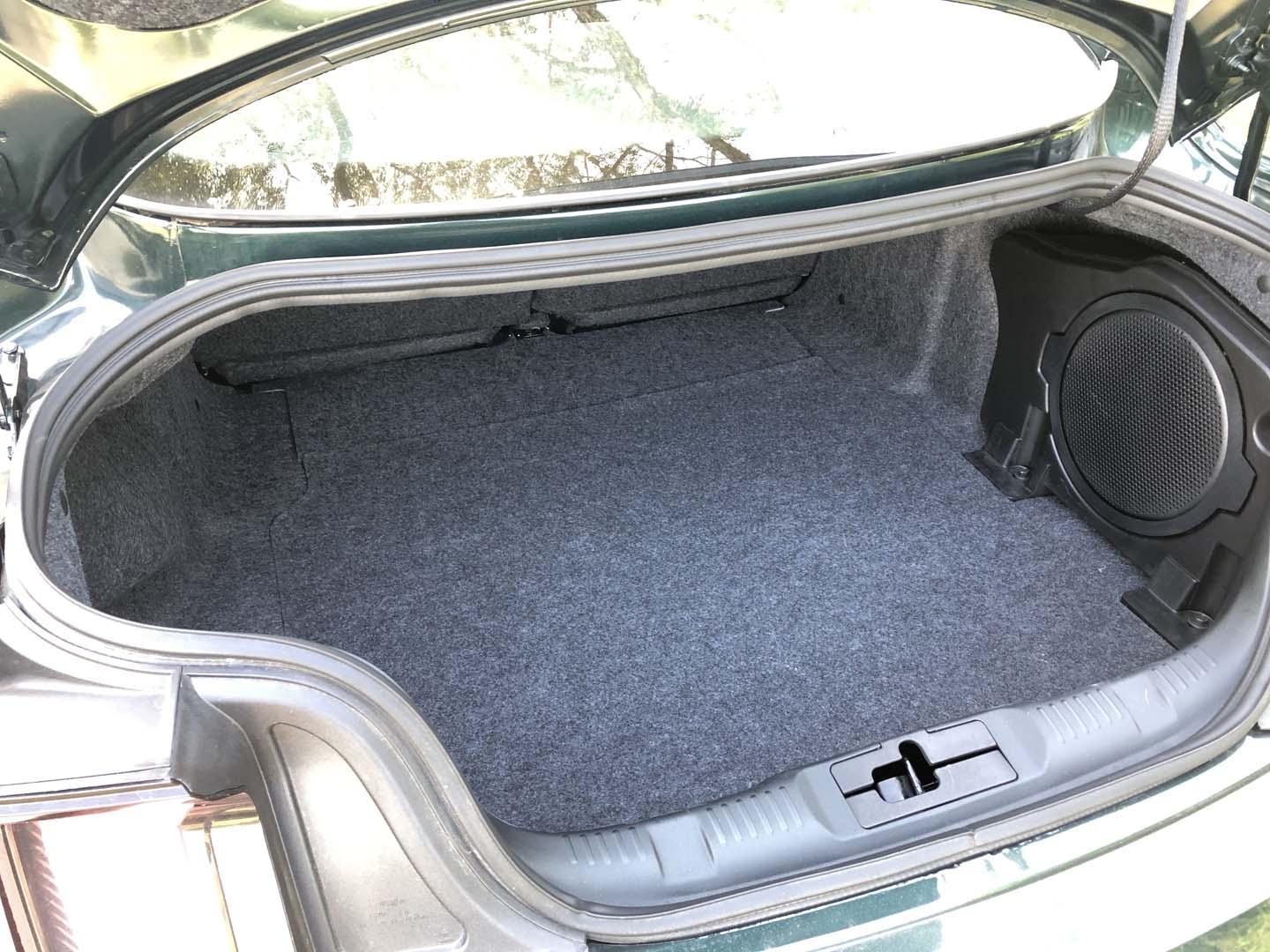 The Bullitt runs the same engine as the regular Mustang GT which is a 5.0-litre V8 and this is the same engine the thing has run for many years now. This latest version, though, has been fitted with a direct injection system which has beefed up power in the GT to 339kW at 7000rpm. But the Bullit gets an active valve performance exhaust system retuned to “give the car a signature burble”, as well as a new Open Air Induction System and Shelby GT350 intake manifold. This increases power to 345kW while torque remains the same at 556Nm from 2000rpm.

Look, I’d be lying if I said you’ll notice the extra few killowatts but it’s all about bragging rights, right…

The 10-speed automatic certainly makes the Mustang an easier machine to get the best from, but there’s just something about a manual transmission that suits this machine down to the ground. Self-shifting adds to the drama created by that gravel-chewing exhaust note that’s loud and lumpy at low revs, hardening up and becoming more intense but no quieter as the revs rise. Honestly, if there’s a modern performance car with a better sounding engine and exhaust note, I’ve yet to drive/hear it.

But, despite the Mustang being fully capable of getting to 100km/h in less that 5.0-seconds it’s not the sort of car that tries to snap your neck off with acceleration and you’ve got to be prepared to rev the thing to get it to pick up its skirt. But once it’s up and running the thing accumulates speed like a charging bull.

Fun. And capable. And loud. The thing is so growly that Ford’s engineers fitted a ‘good neighbor mode’ which quietens the exhaust so as not to wake up everyone on your street when leaving the house at sparrows… Fire the Bullitt up and it snaps and snarls into life before settling into a lumpy menacing grumble.

It’s the MagneRide adaptive dampers that transform the Mustang from a cruiser into a proper sports car. Leave the dampers set to Normal and the thing is comfortable when cruising along on the highway or crawling around town; smothering bumps in a way you don’t expect it to.

But, start pushing the thing through corners and the suspension will harden up to improve body control. Combined with feelsome and direct steering, turn-in is impressive as is the body control as the thing stays flat through even the tightest of corner taken at speed. And both the front-end and rear-end grip is immense and I reckon you’d need fingers of butter and fists of ham to upset this thing mid-corner.

And that’s because as sharp as the Mustang Bullitt feels it’s also incredibly progressive in the way it responds and behaves. It’s not the sort of machine that will snap sideways on you when you leave a roundabout in the wet, for instance.

One of the things I like most about the Mustang is that, despite the thrust lurking beneath your right foot, it never feels like its straining at the leash. This means you can tootle along to the shops without the thing feeling like a bull in a china shop, if you get my drift. It’s an easy-going beastie.

The brakes are another one of the Mustang’s strong points with a good progressive pedal and the ability to soak up plenty of hard stops. The day we headed out to test the Mustang on our drive loop and beyond it was 41-degrees C but that didn’t stop us from punishing the thing. Even across some dodgy and steep country roads the Mustang’s brakes remained strong and consistent. 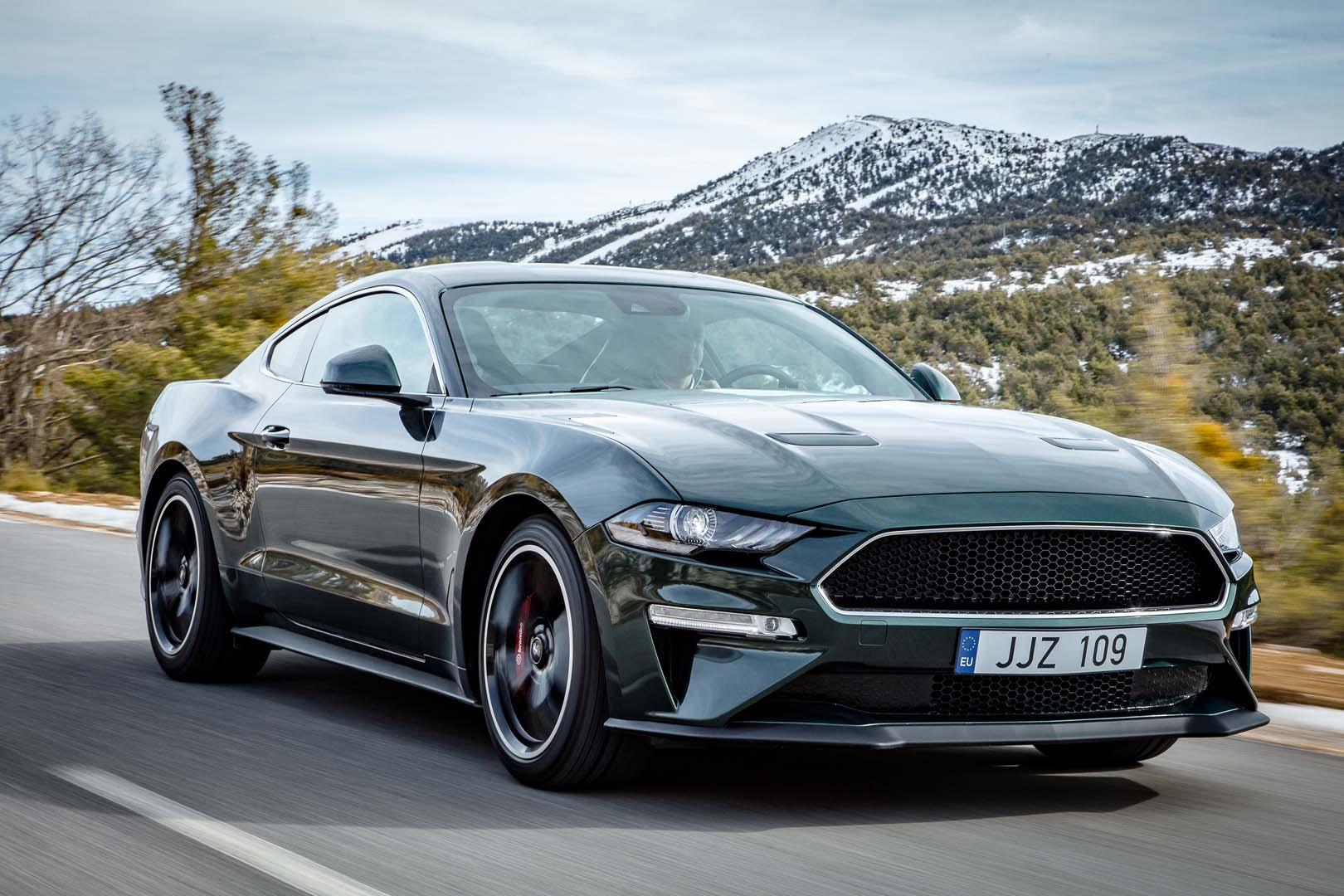 What about safety features?

The Mustang was walloped by ANCAP and EuroNCAP but Ford’s recent update sought to reverse the criticisms with autonomous emergency braking the major active safety feature added. It was this addition alone that helped the car jump in its rating from two-stars to three. Beyond this there are eight airbags, traction and stability controls, Brembo brakes, and a wide-angle reversing camera with dynamic guide lines.

So, what do we think?

The Ford Mustang Bullitt could so easily have been a caricature of the Mustang. Thankfully, it isn’t. Sure, you could live without some of the Bullitt badges, but it really does make the Mustang better via the more-power V8 and standard-fit MagneRide dampers…and who can go past the Mustang in Highland Green? 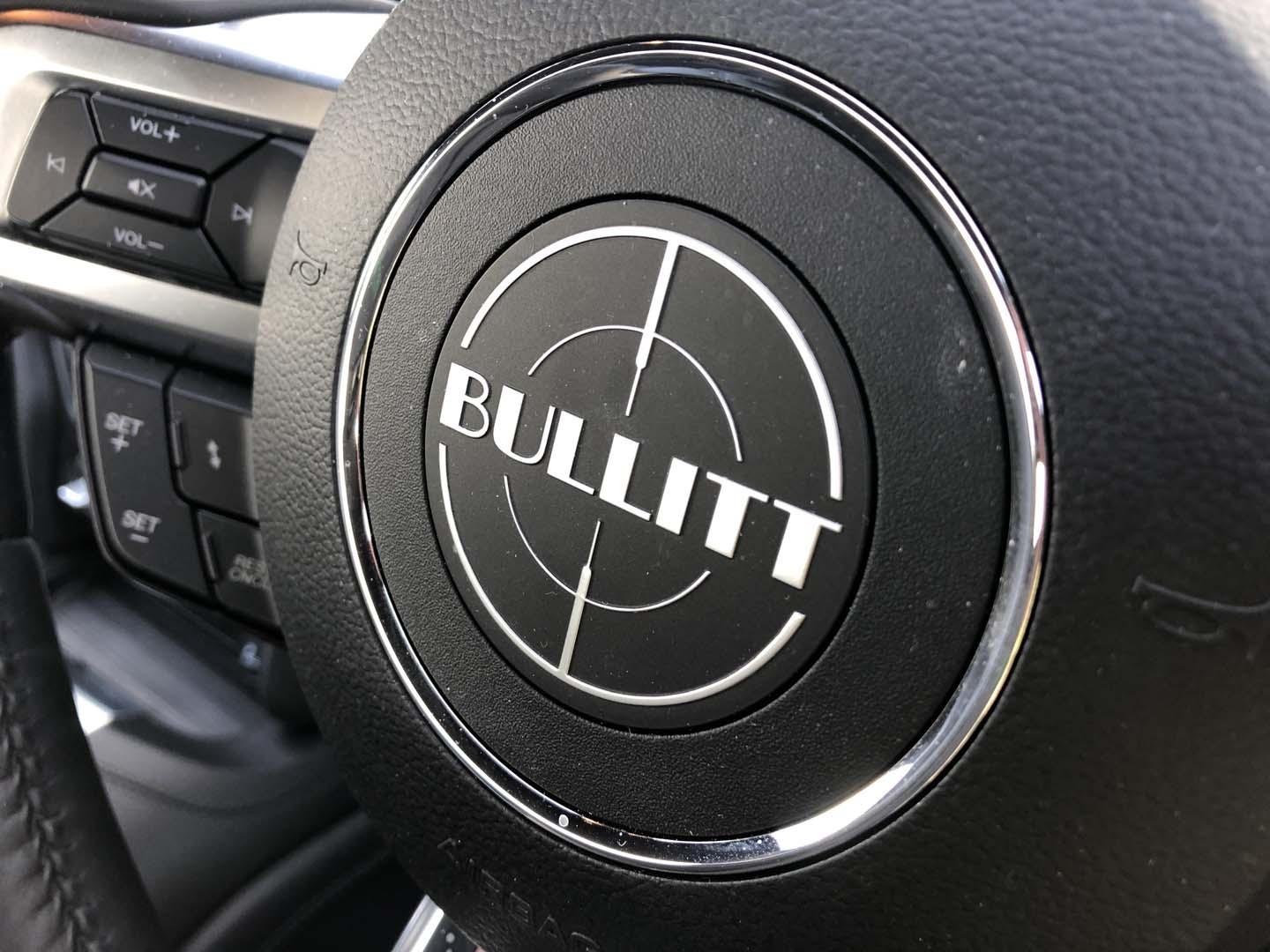 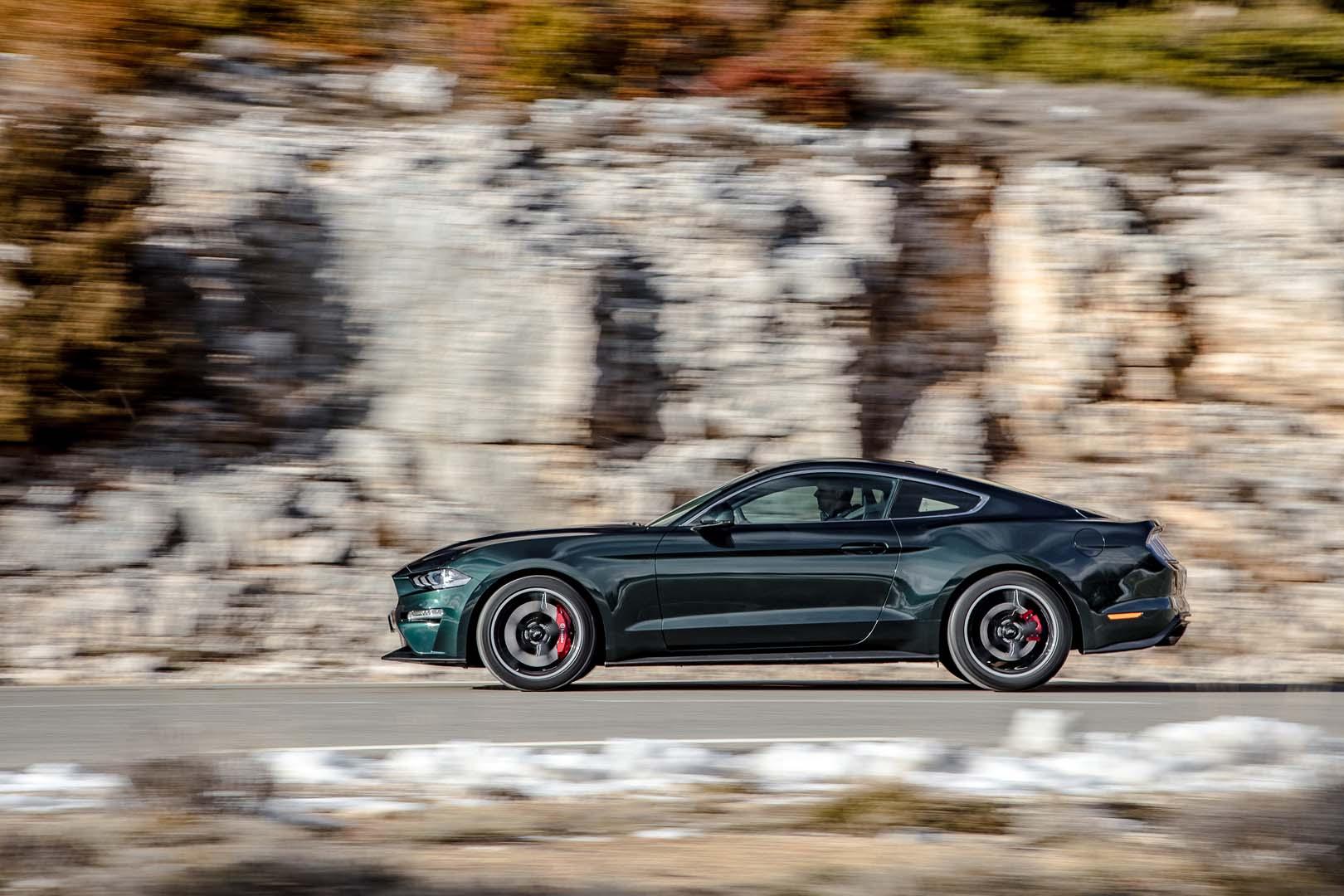