Burns & Co. Auctions’ next Classic Car & Motorbike Auction is on Sunday, 7 August, and there’s a bunch of desirable Aussie cars up for grabs, both old and new, amongst the 85 lots on offer. 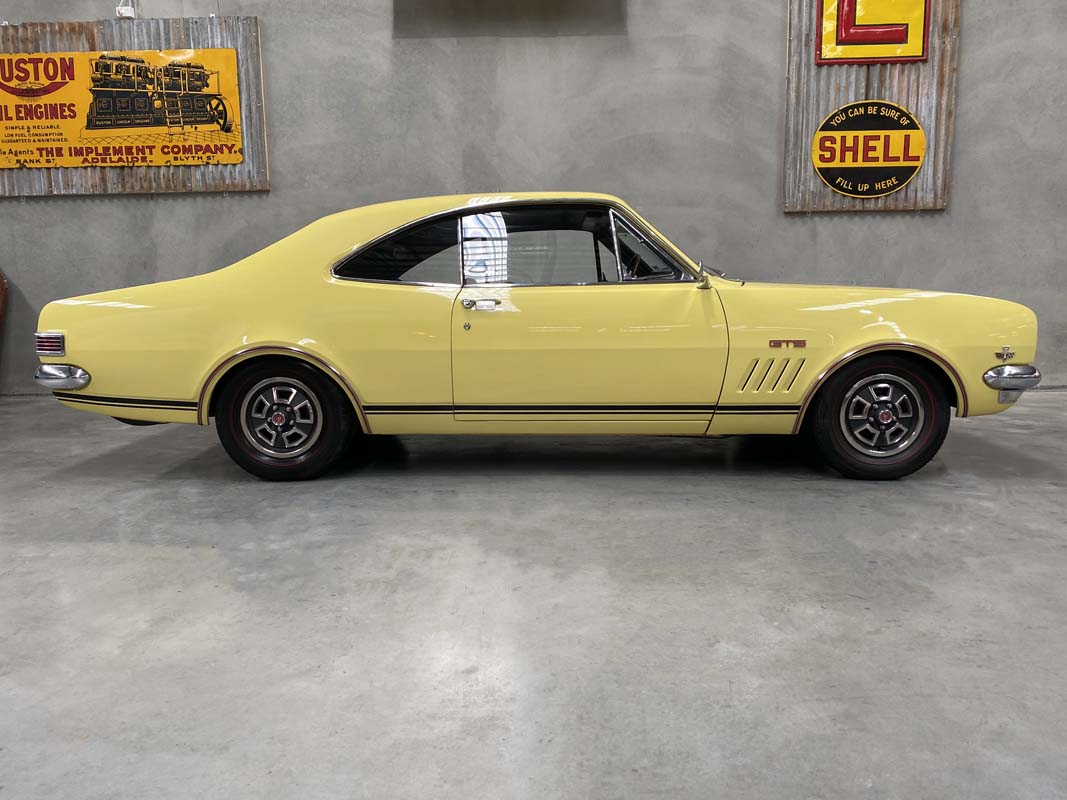 In addition to the cars, there are several motorcycles and multiple items of automobilia available, too, including neon and enamel signs, commemorative number plates, scale models, books and more.

Pre-bidding for registered bidders is open now, with selling commencing from 12 Noon on Sunday, 7 August, at Burns & Co’s Melbourne auction rooms in Bayswater.

Highlights amongst the Aussie cars consigned include the following: 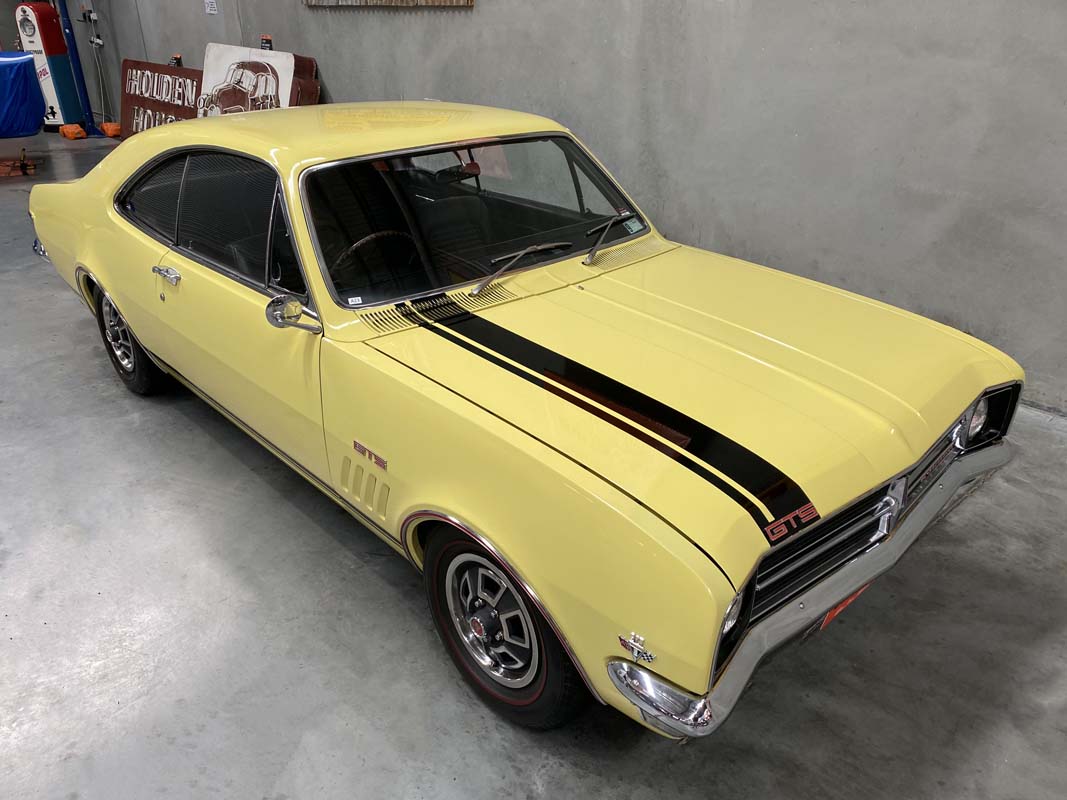 This HK Monaro GTS 327 is a genuine, matching numbers example, finished in the desirable Warwick Yellow with a black vinyl interior and fitted with the Chev 327 V8 and 4-speed manual transmission. 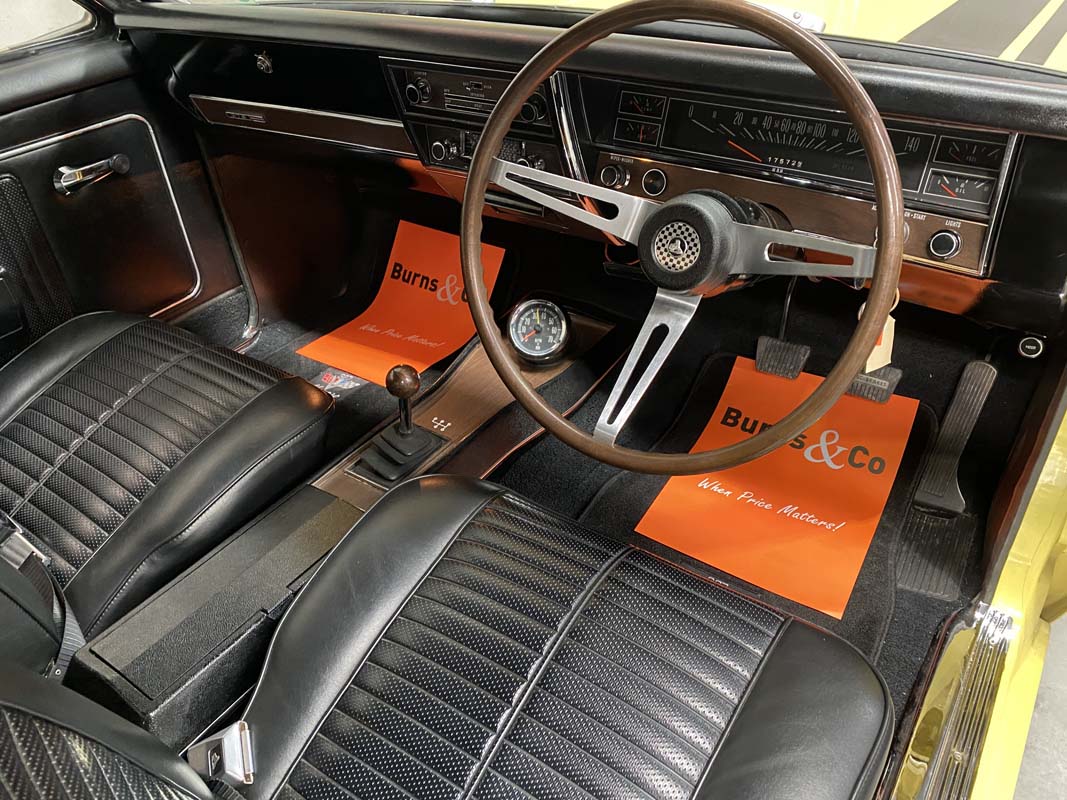 Fully restored, this example is unusual, as part of the VIN has been overstamped, which is a rare occurrence, but one that did happen occasionally at the factory. The authenticity of the car is confirmed by documentation from Holden, which will be supplied. 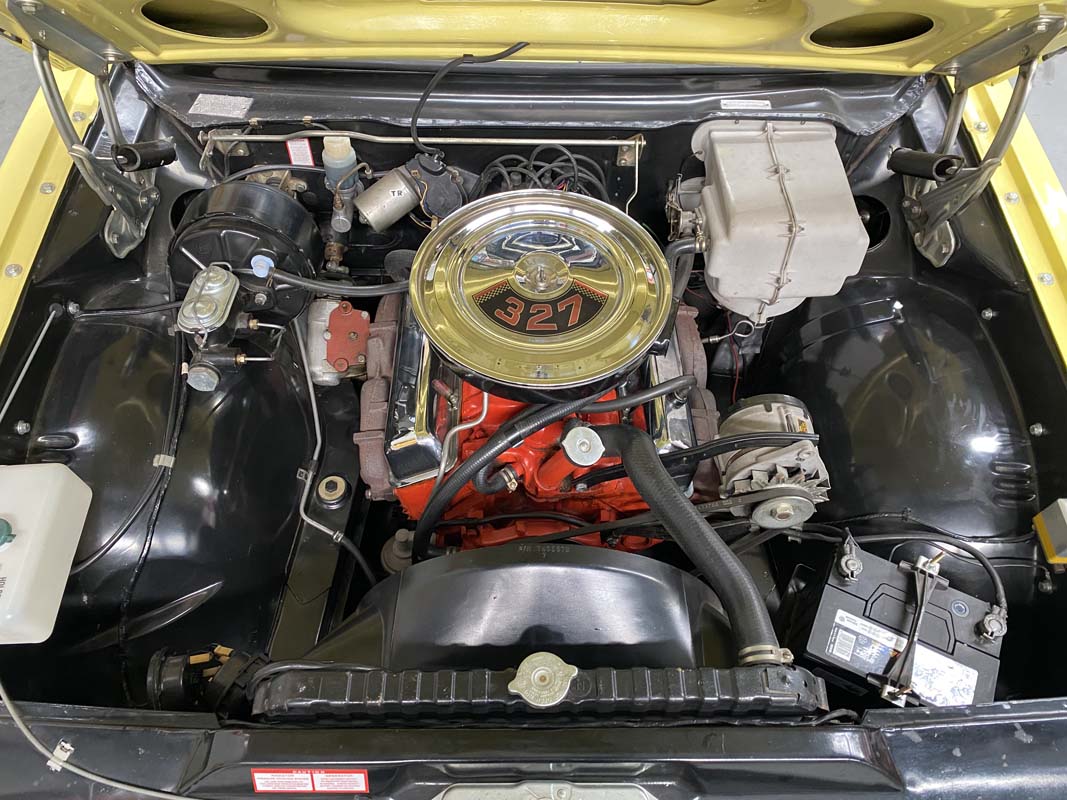 First-generation Monaros, especially in “Bathurst Monaro” spec like this one (so named after 327-powered cars finished 1-2-3 in the 1968 Hardie-Ferodo 500 at Mount Panorama), are blue ribbon investments, so this one should sell well, especially after the last example auctioned through Burns & Co sold for a six-figure amount. 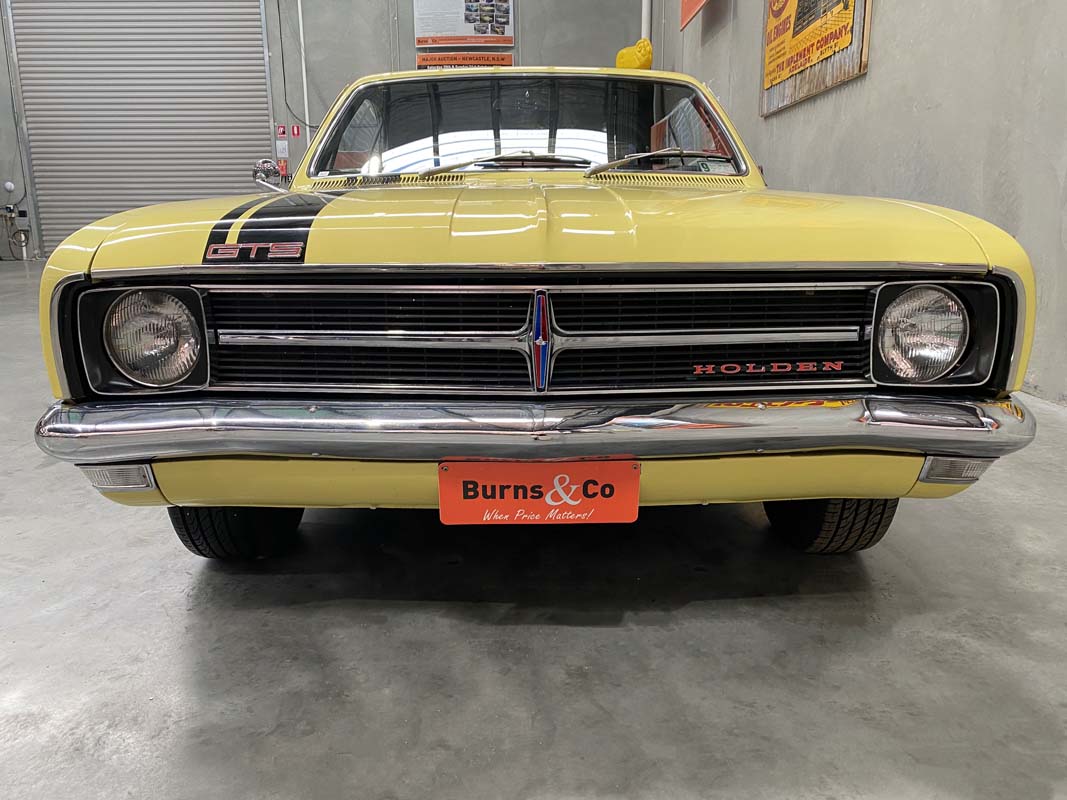 Featured on the collectable Mac’s shortbread tins and in numerous ad campaigns, this restored Monaro will be offered with full documentation, Victorian display plates, original keys and related collectables. 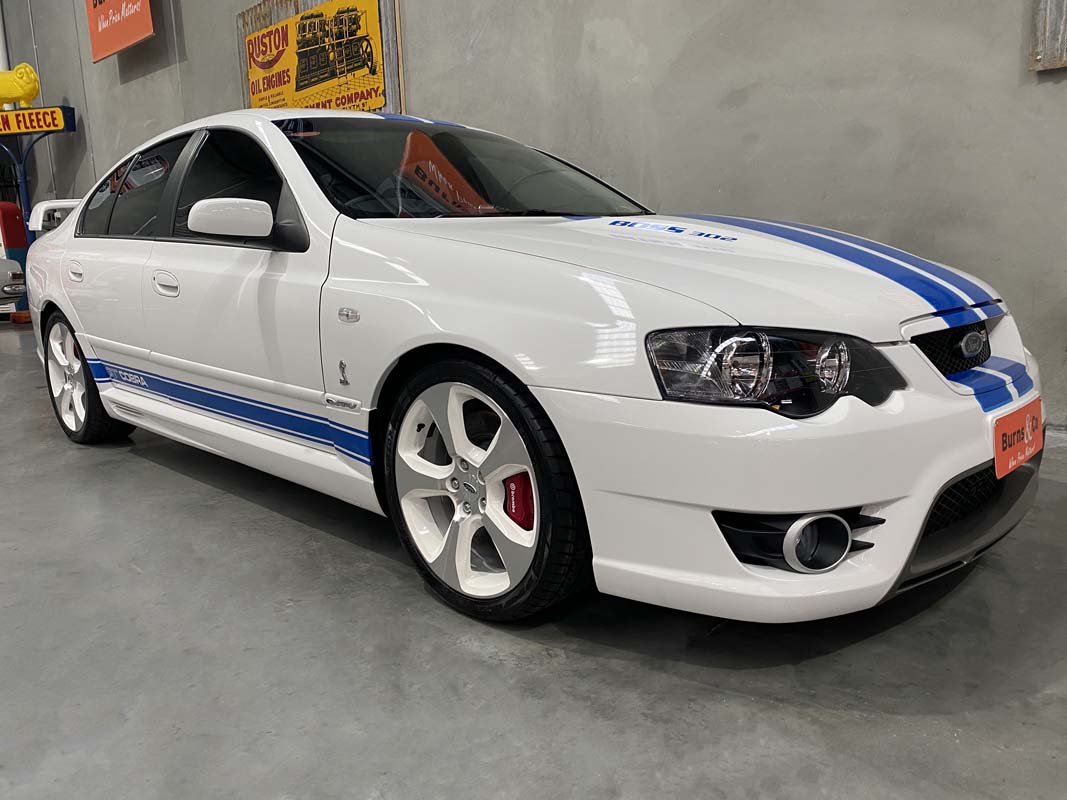 In 2007, to mark (almost) 30 years since the release of the original XC Falcon hardtop-based, limited-edition Cobra in 1978, Ford Australia released a Cobra tribute as part of the FPV range.

Available as a sedan and ute, 400 units of the former and 100 of the latter were built and all found buyers, despite a $60K+ price tag. 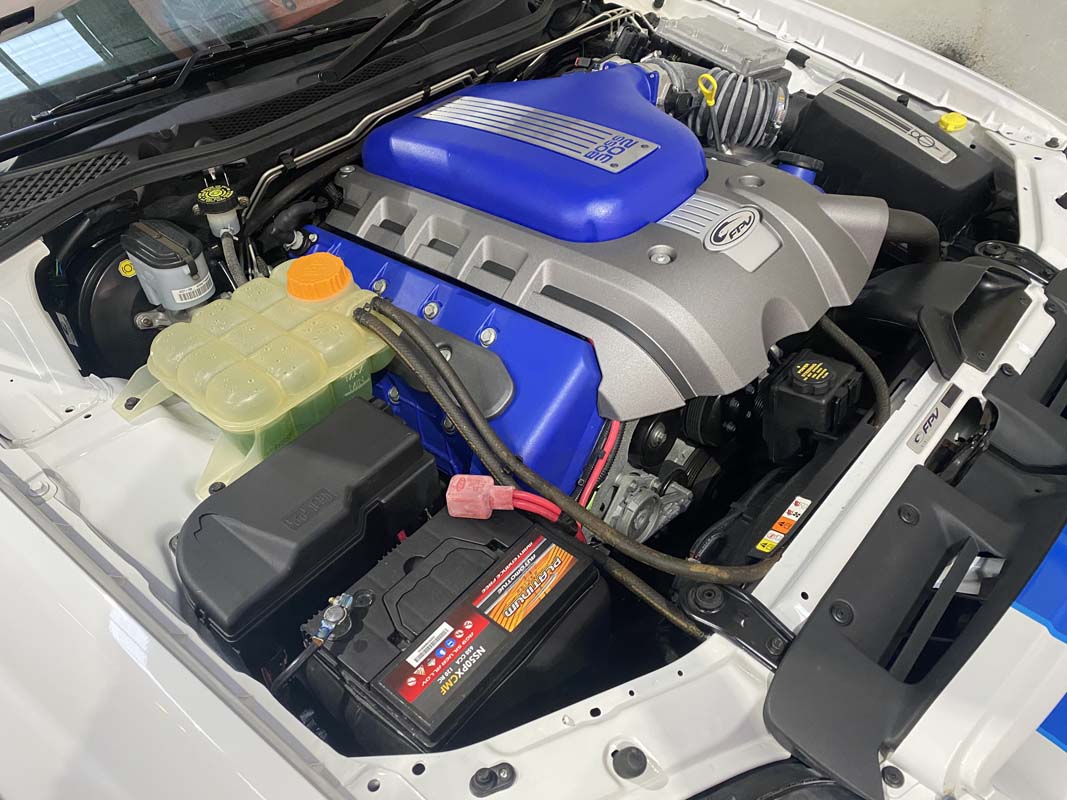 In the FPV Cobra sedan, the 5.4-litre V8 from the FPV GT was tuned to deliver 302kW and 540Nm (increases of 12kW and 20Nm) and could be paired with either a close ratio six-speed manual transmission or six-speed automatic. Suspension from the GT R-Spec, along with 19-inch alloys and Dunlop SP Sport Maxxx tyres, were standard. 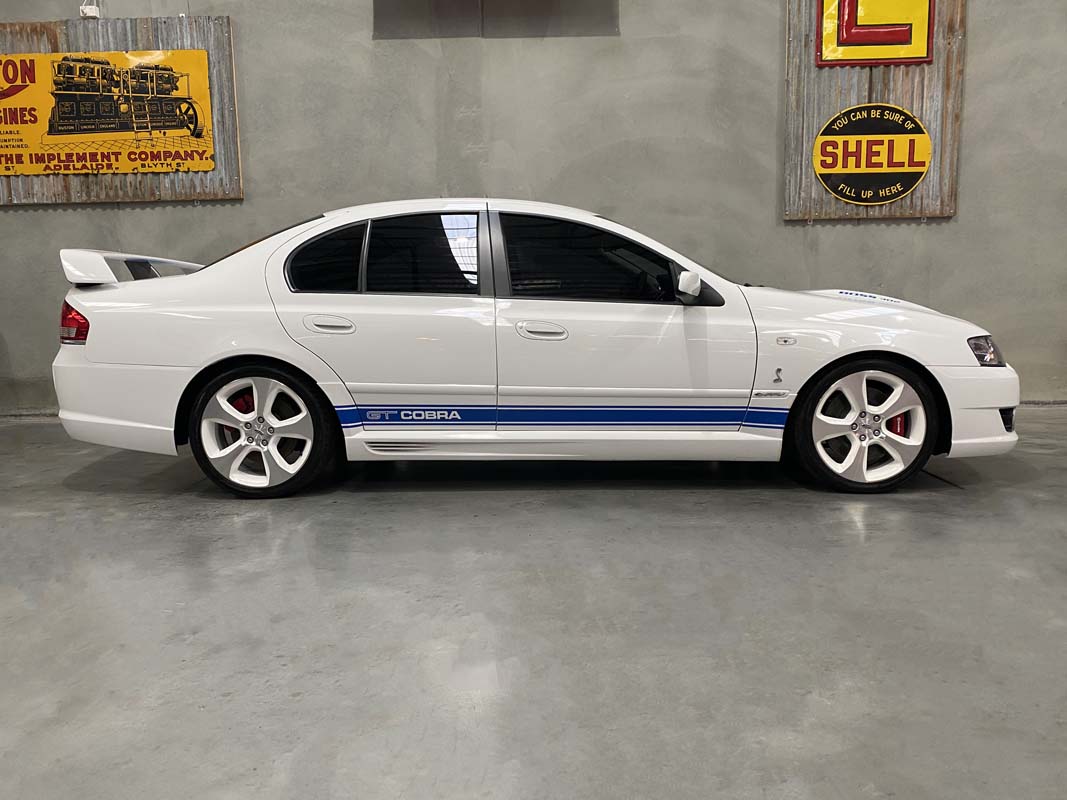 Externally, all FPV Cobras were finished in white with full length blue stripes, blue lower body striping, Cobra decals and badging, as well as ‘Boss 302’ callouts on the bonnet, referencing the 302 V8 that powered half the original XC Cobras. Inside, a plaque on the console identified each car’s individual build number in the 400-unit run. 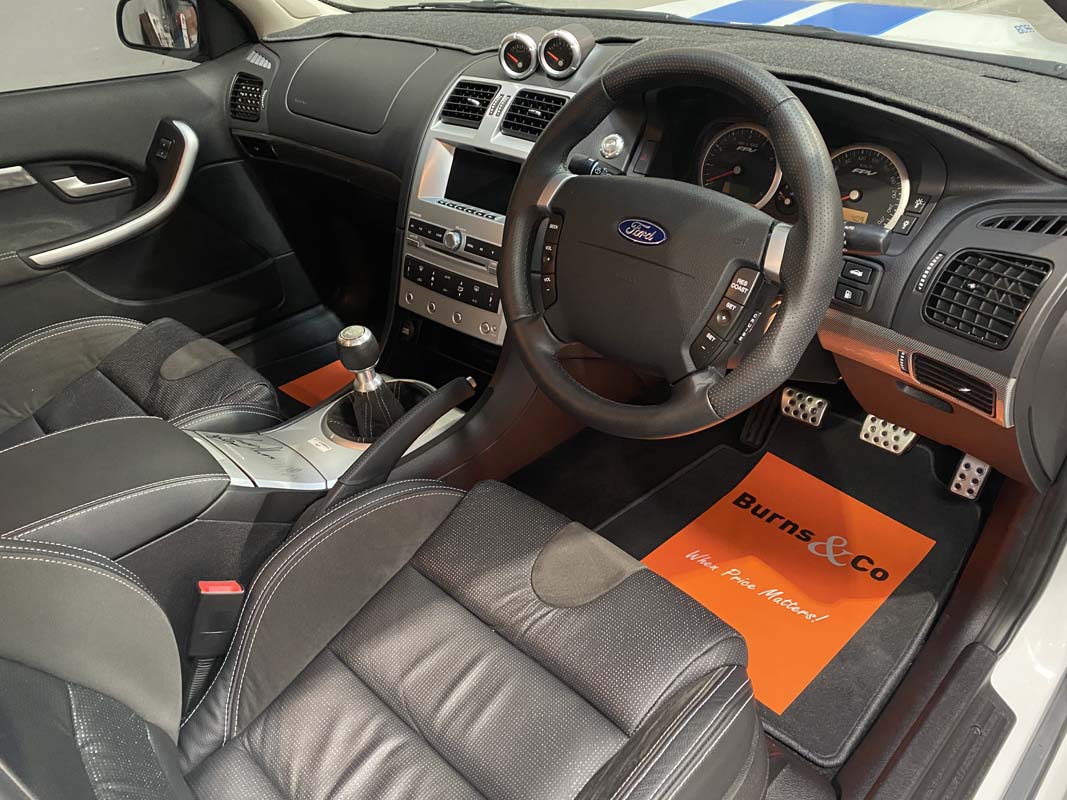 Immaculate inside and out, this 2008-model FPV GT Cobra is offered with all books. 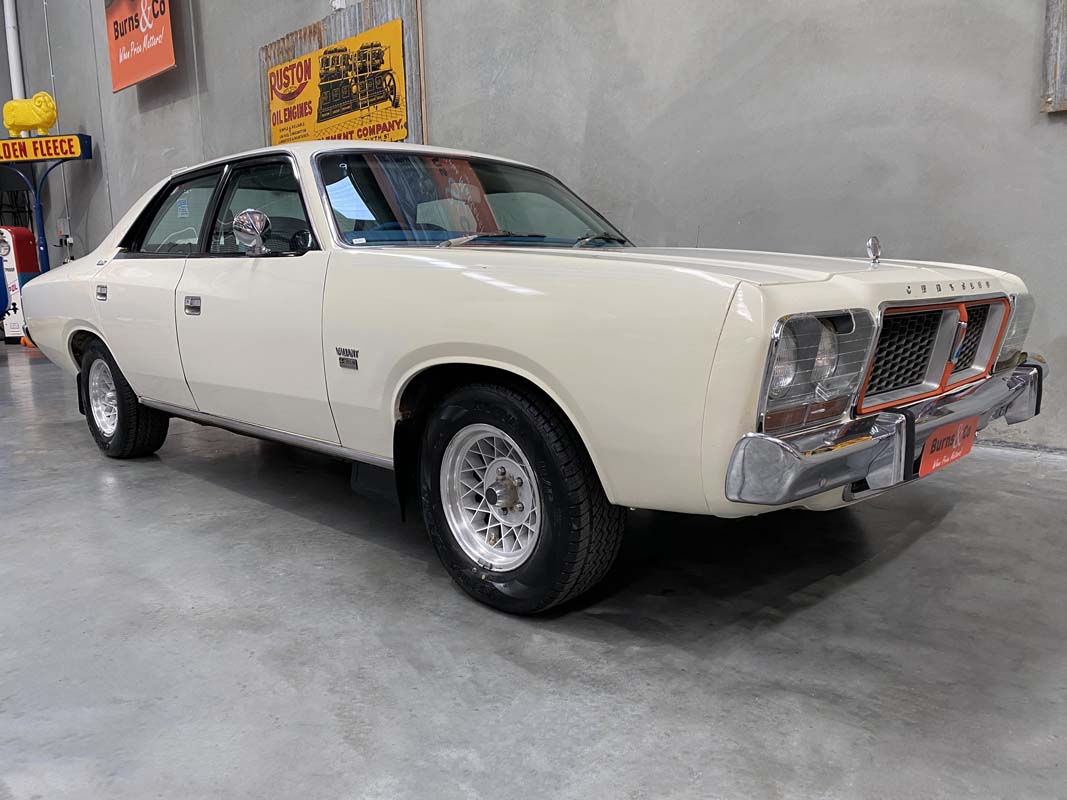 From the last year for the Aussie-made Chrysler Valiant, the VIN on this car shows it was built in February, 1981, just six months before the last Valiant rolled off the line and Chrysler’s Australian factory became the home of Mitsubishi. 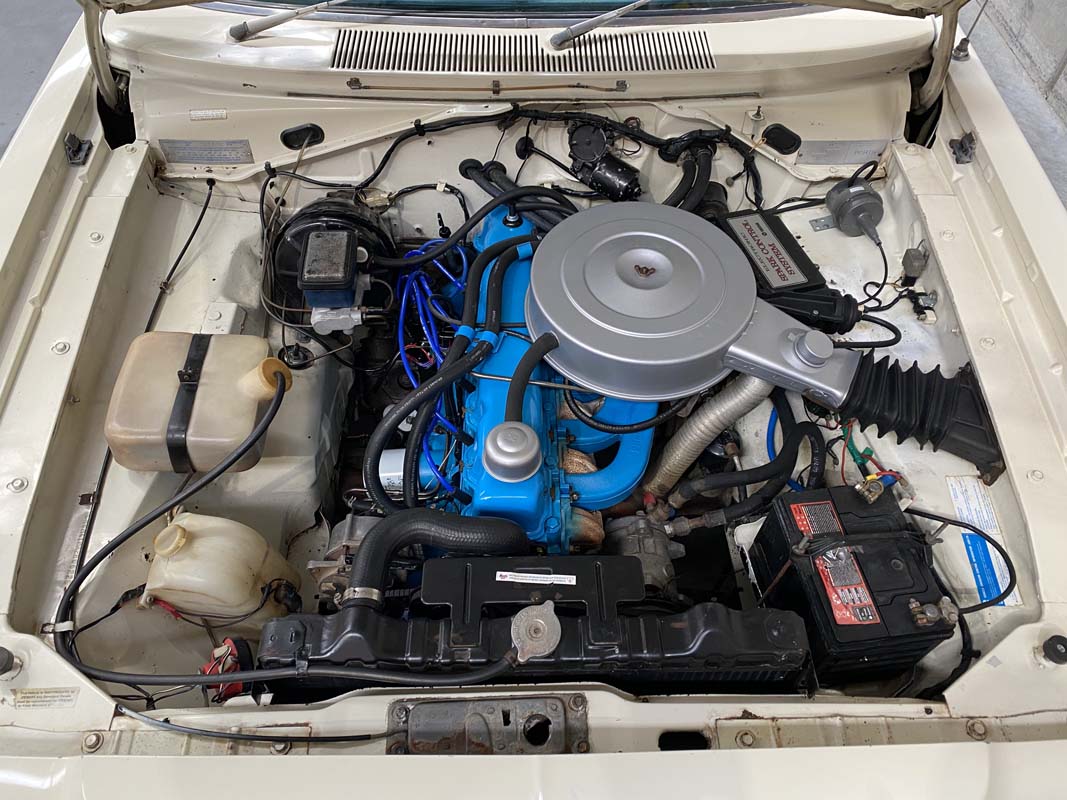 The Valiant on offer was fitted with the GLX pack at the factory, which consisted of the 265 cubic inch (4.3-litre) slant six engine and a 4-speed manual transmission. A 3-speed automatic, as fitted to this car, was optional, as was a 318 V8. The GLX pack also included Hotwire alloys, a painted grille, bodyside rub strips, tinted side glass, floor and roof consoles, rear seat armrests, a tachometer and other extras. 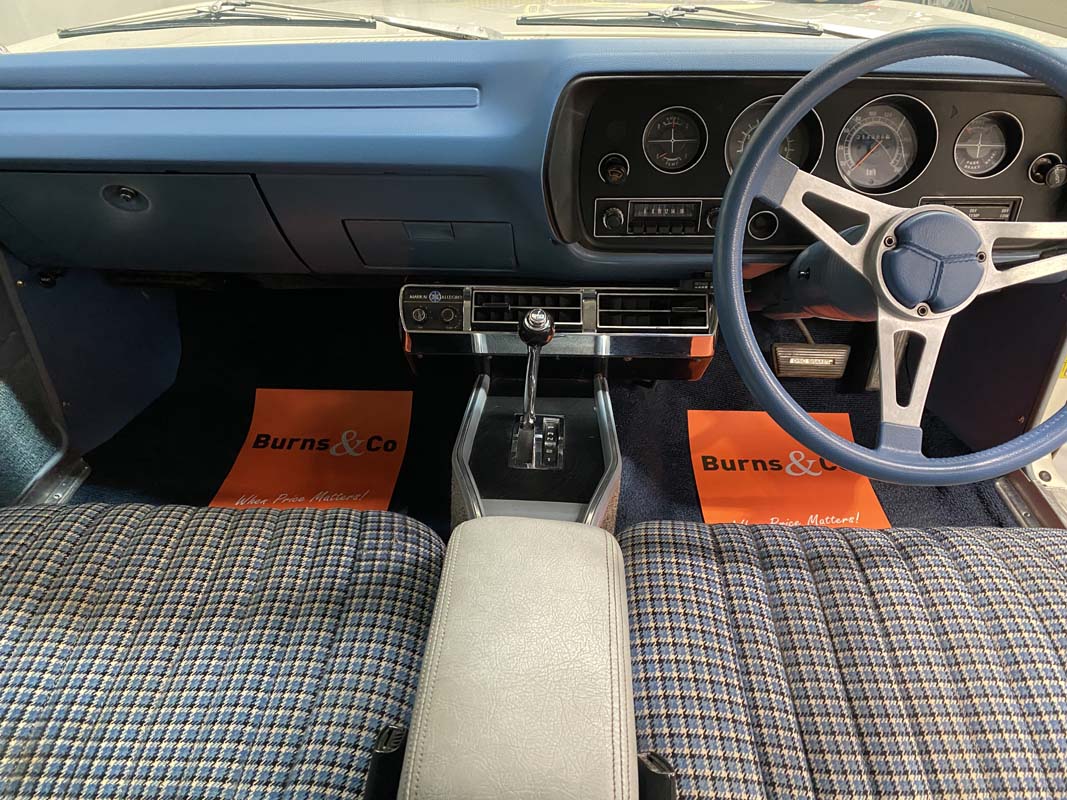 Finished in white with a blue interior, including distinctive houndstooth cloth seat trims, the engine in this Valiant is original and has recently been rebuilt. The original auto transmission remains in the car, too, with the rest of this end-of-the-line Valiant described as being in very good original condition. 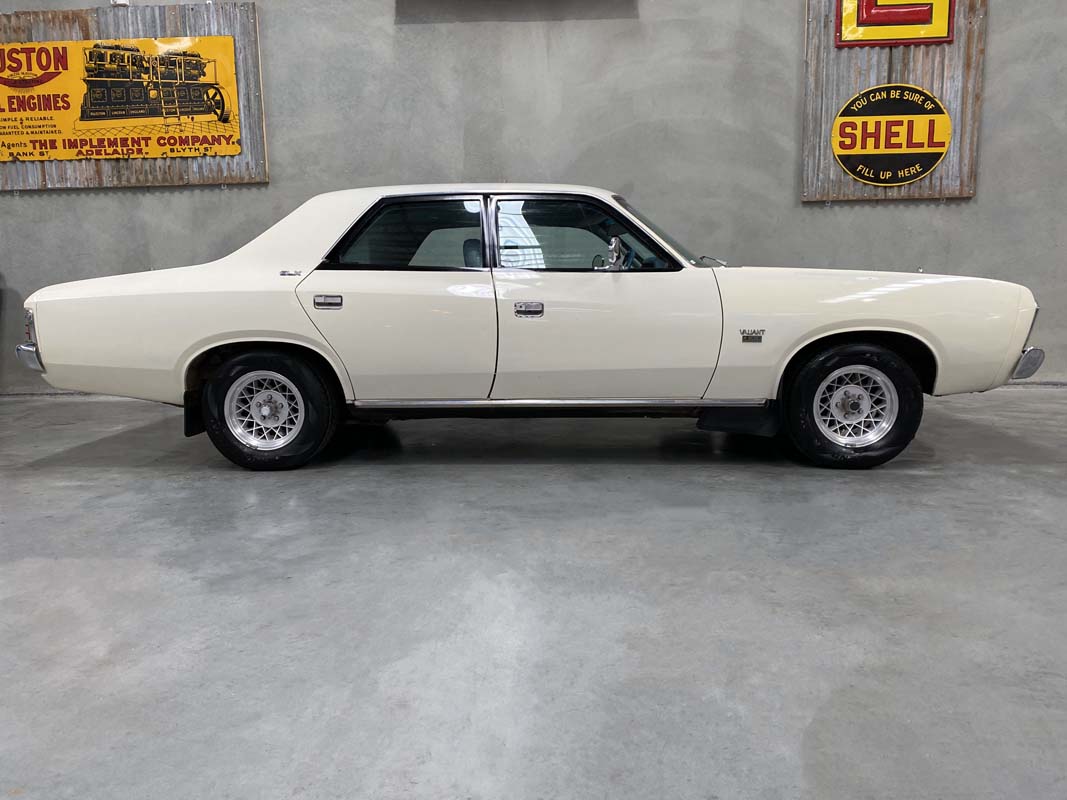 The GLX pack was only available on the standard Valiant sedan and not offered on the more upmarket Regal. With only 605 units so equipped, it makes this car a rare vehicle.

With 214,386kmn on the odometer and factory authentic in most ways, this is a real survivor car and may be the bargain buy of the auction, with only $5,100 in pre-bids at time of writing. 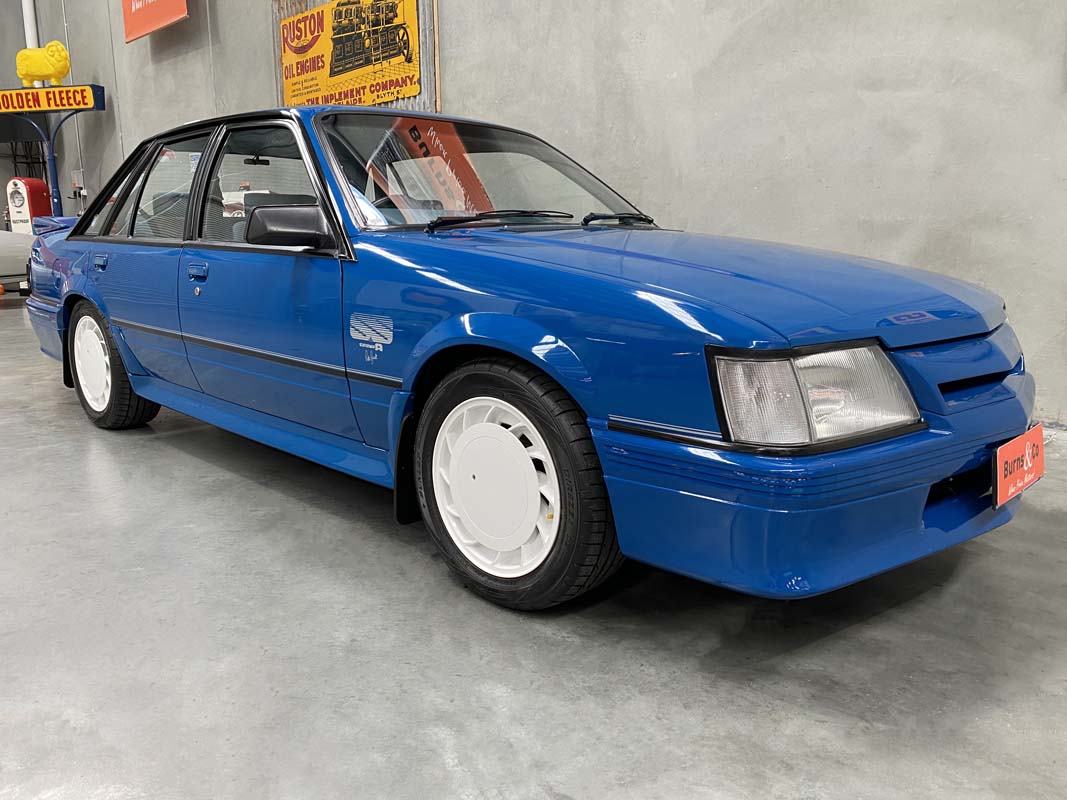 As far as desirable HDT cars go, the “Blue Meanie” VK SS tops the lot, especially in Group A and combined Group3/Group A form.

Arguably the pinnacle of HDT’s development of the first-generation Holden Commodore, the VK SS Group A was defined by its Formula Blue paint, locally-developed bodykit and Aero wheels outside, with a tuned 4.9-litre V8 (actually 4987cc) under the bonnet 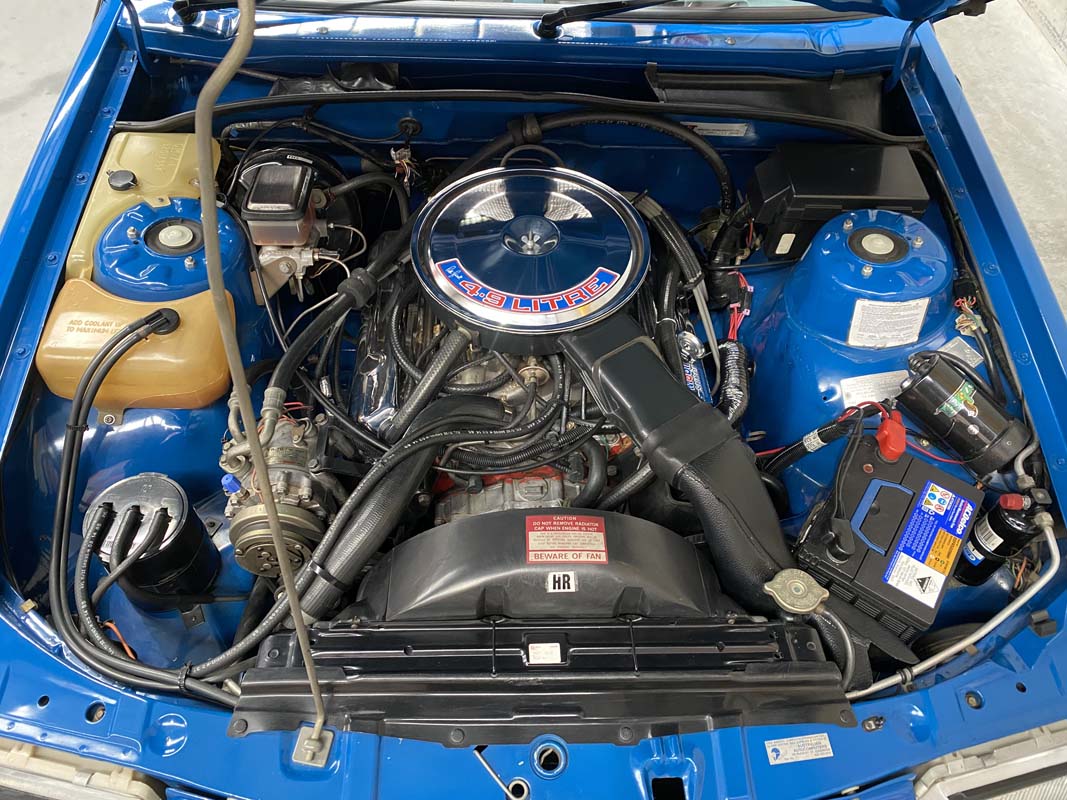 With 500 units built to meet Group A homologation, the VK Group A features applied on the race cars include aero add-ons front and rear, and engine modifications that resulted in output of 196kW. A 4-speed M21 manual was standard and the only transmission offered.

Inside, Scheel seats, a Momo steering wheel, Momo shift knob and a glovebox plaque identifying the car’s build number were the only items separating the HDT from a standard VK Commodore SL interior. The HDT VK Group 3 offered more interior refinements, leading some customers to order their cars with both packages, resulting in an estimated 48 cars leaving HDT in Group3/Group A form. 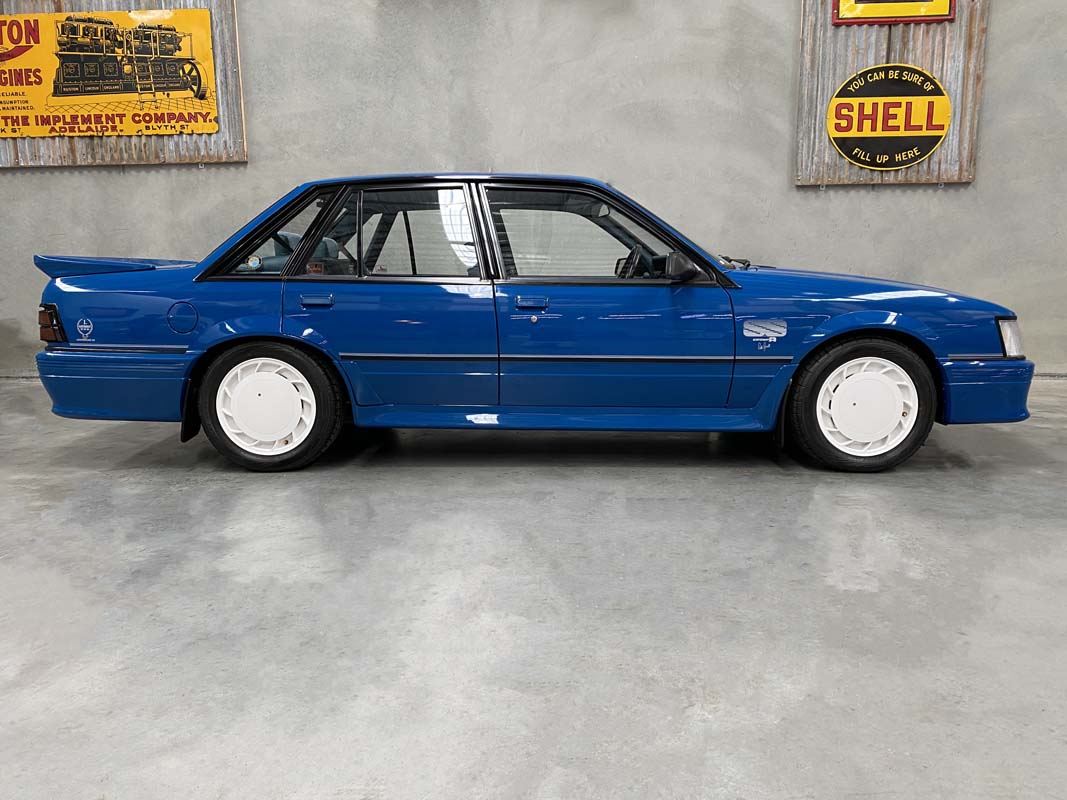 The HDT VK SS Group A consigned here is number 355 of 500 and described by Burns & Co as being as good an example as you’re likely to find. Completely original and unrestored, bar an NOS gearbox supplied and fitted by former HDT mechanic Ian Tate. The power steering has been rebuilt and the front brake rotors replaced by Tate Engines, who have maintained the car since new. 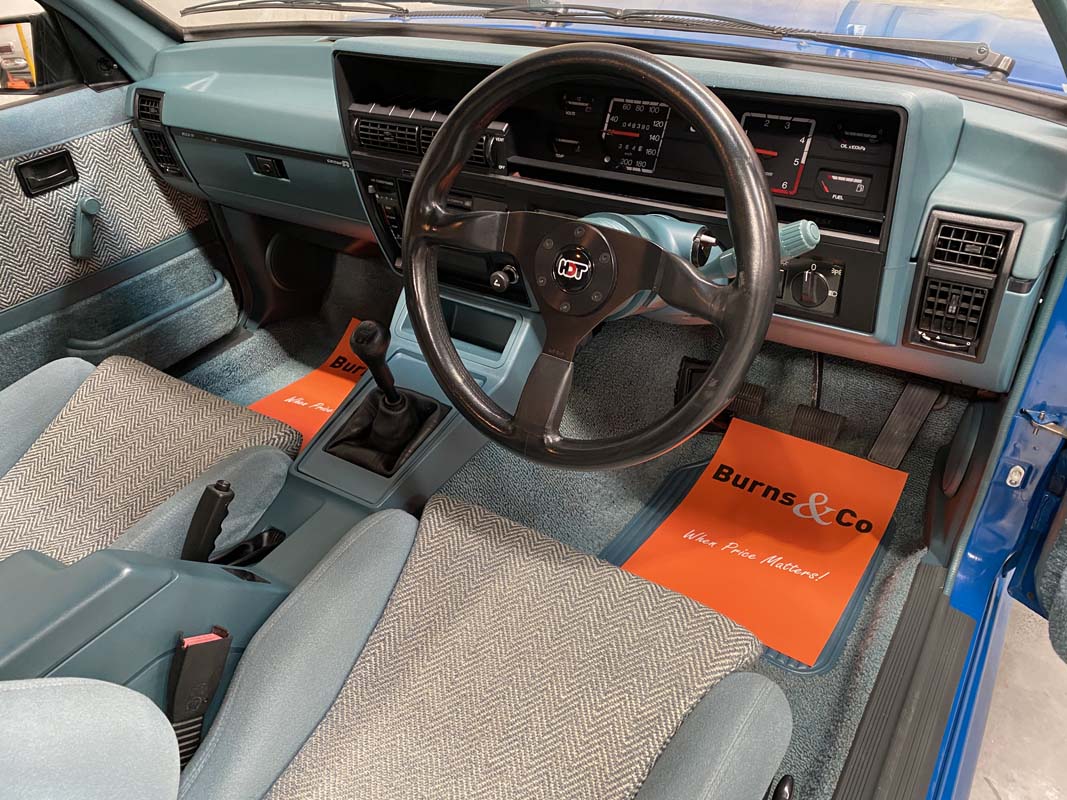 This car has been fitted with the Group 3 interior, as well as air conditioning, an alarm, towbar and 4-speaker stereo. Other upgrades include Group 3 side/rear skirts and a 5-speed gearbox, all of which are genuine HDT items, as well as white Aero wheels. The original 4-speed will be included with the sale, along with HDT headers and a new muffler. 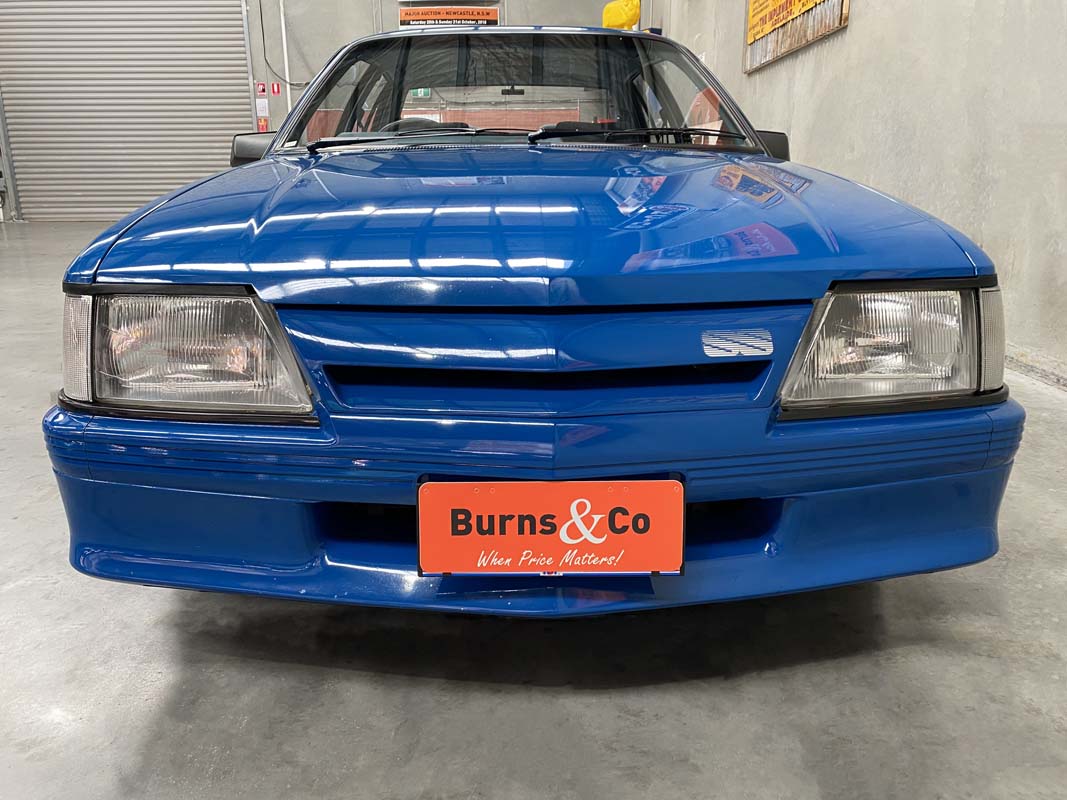 Although listed mileage is 49,390km at time of consignment, this genuine HDT VK SS Group A has been driven sparingly, with the consignor stating only 5km on average has been covered per month in the last 25 years.

The high desirability and investment status of early Brock Commodores has already seen this one reach $180,000 in pre-bids ahead of Sunday’s auction. 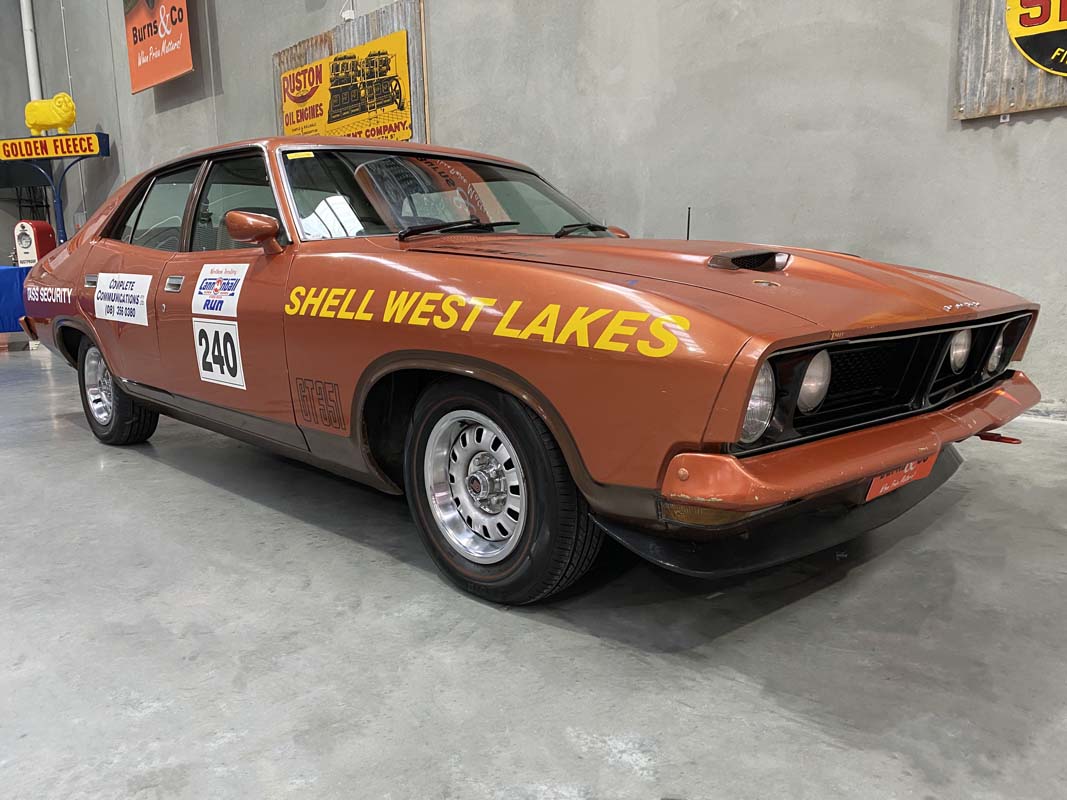 Already a rare unit, what makes this original, unrestored XB Falcon GT sedan even rarer is its Outback Bronze paint – one of only 13 XB GTs produced in this colour. Given this car was entered in the infamous 1994 Cannonball Run in the Northern Territory, the colour is appropriate! 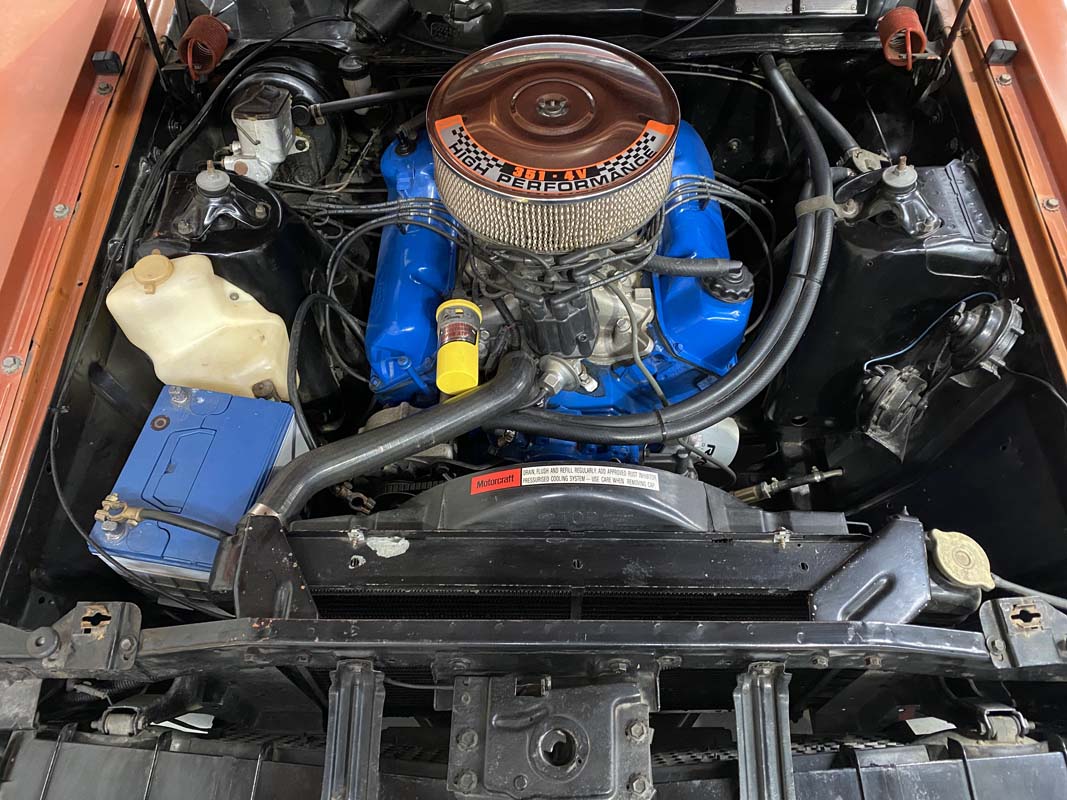 In addition to its rare paint, this GT Sedan was also fitted with tinted side and rear glass, as well as a larger 28-gallon fuel tank at the factory.

To prep the car for the Cannonball Run, a 3,755km road race from Darwin to Alice Springs and back, the owner had a big port 351 V8 from an XA GT fitted, as well as a toploader 4-speed manual and K-Mac suspension. 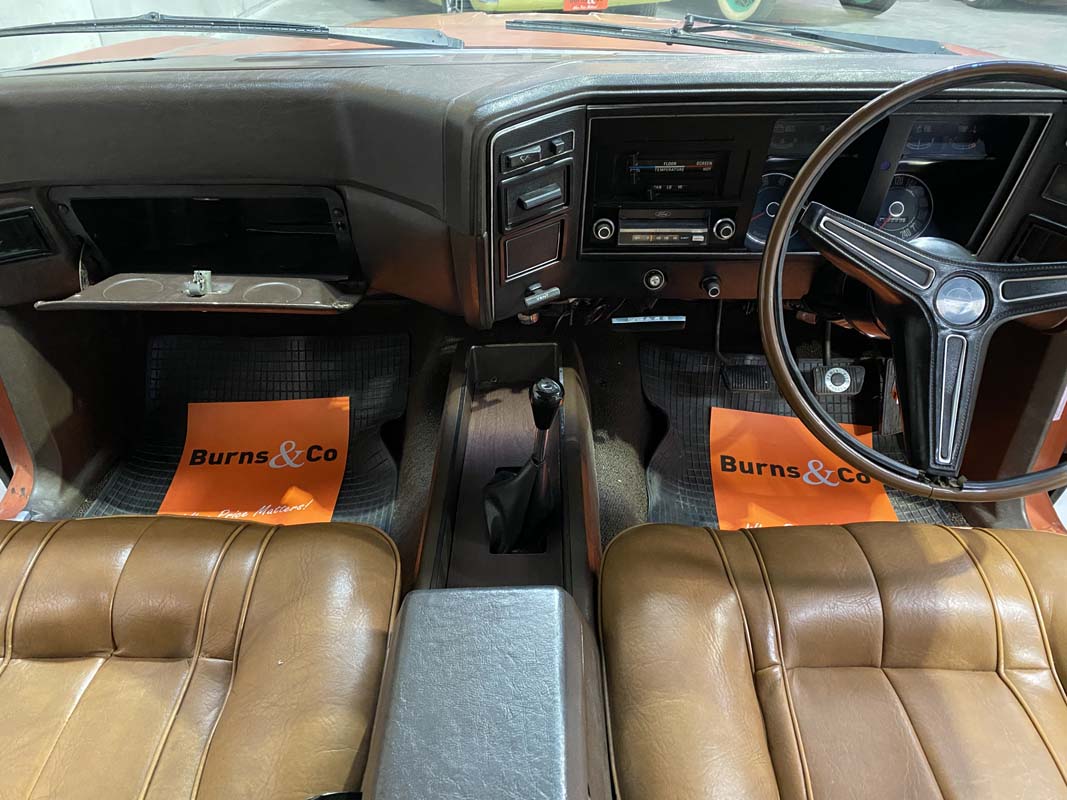 A Porsche 911 Turbo won the controversial Cannonball Run, and while this Falcon GT’s finishing position is unknown, it retains its race number, sponsor signage and special plates from the event. The car comes to auction with 313,293kms on the odometer and its original paint and saddle vinyl interior, along with the mechanical updates made almost 30 years ago. 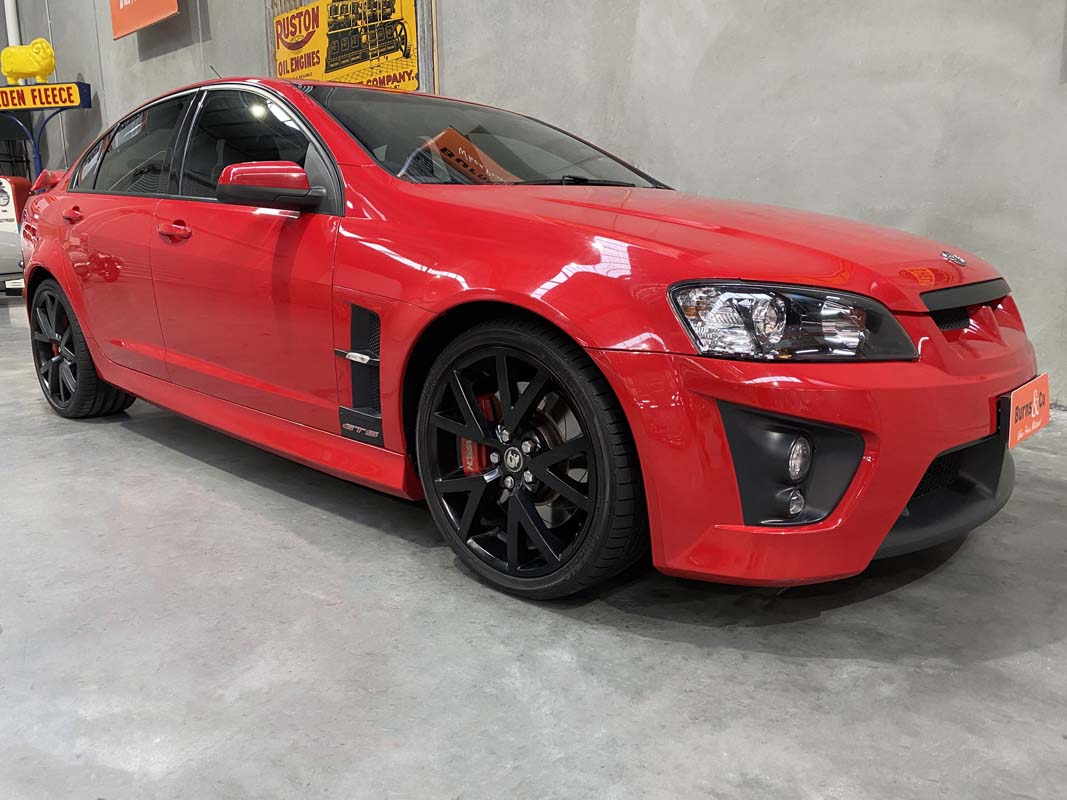 In the quest for more power, the owner of this early E-series GTS sedan had the 6.0-litre LS2 V8 upgraded with a Walkinshaw-fitted supercharger. This improved the factory 307kW to 348.3kW on the dyno, but any change from the standard 550Nm the LS2 delivers is unrecorded.

Transmission is the standard six-speed manual. 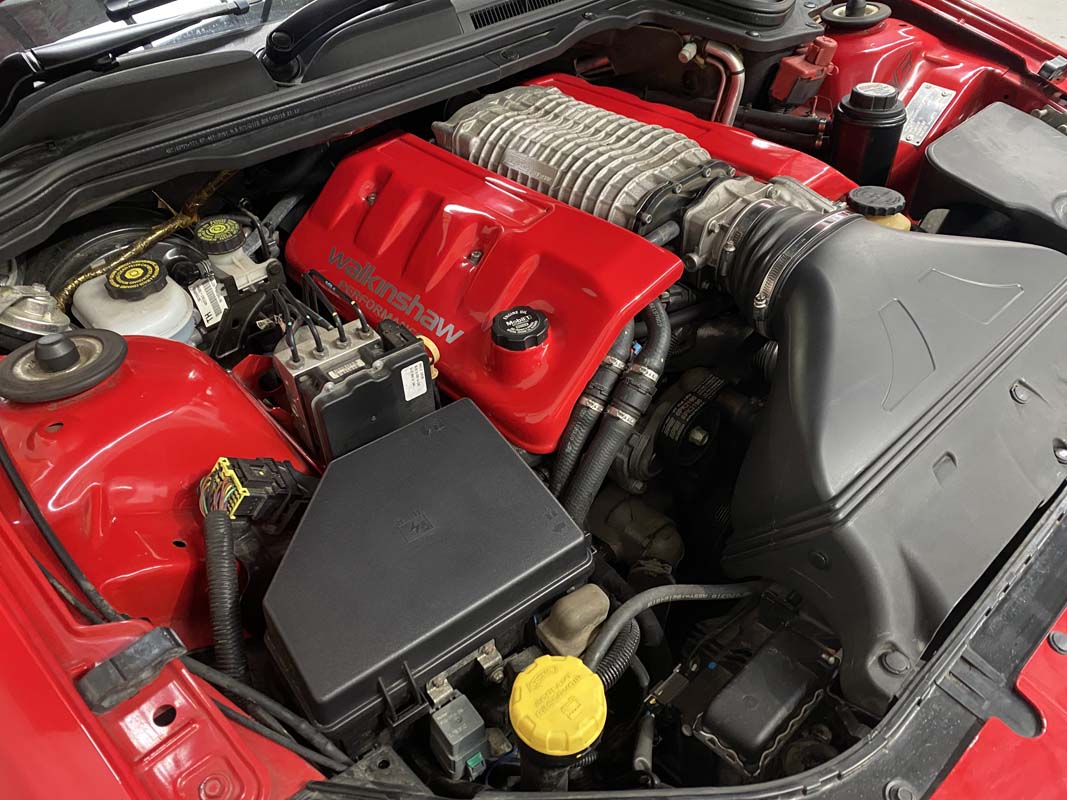 Finished in the always popular Sting Red with an interior in black leather and suede, this E-Series GTS has covered just 84,025km in the 15 years since it was built, with the condition of both the interior and exterior showing it has been well looked after since new. 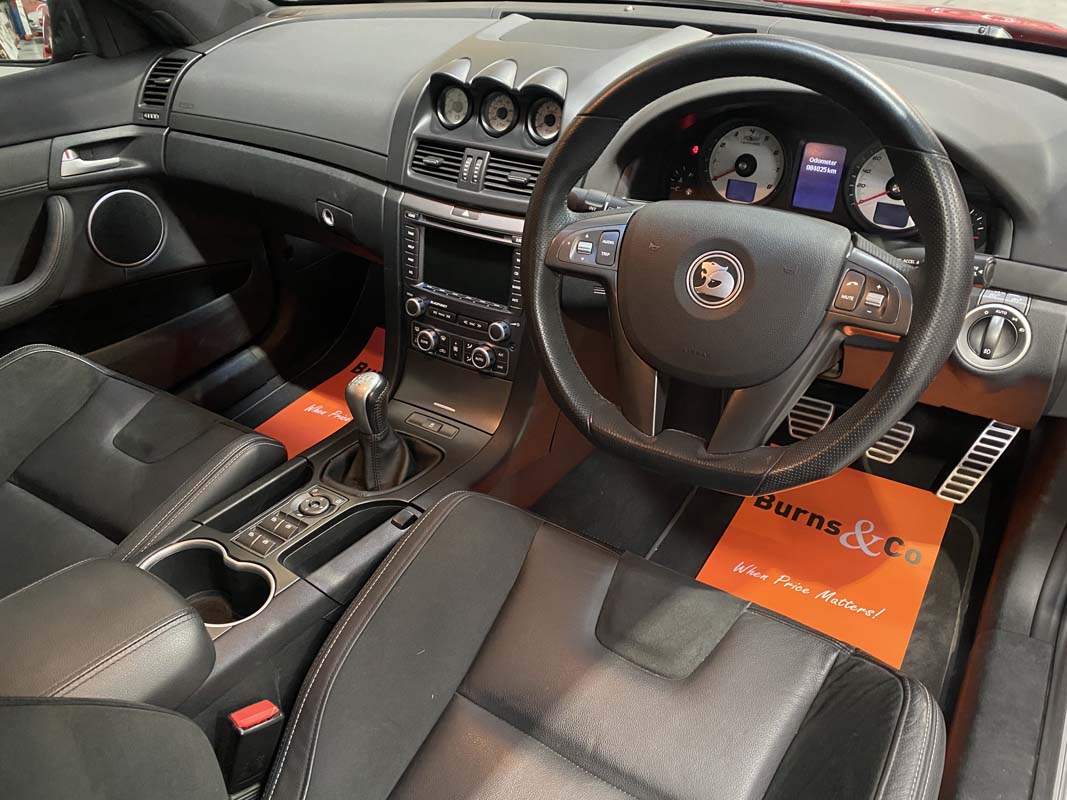 All books and documentation, including dyno sheets and receipts for the supercharger, will be included with the sale.

Biding on this car was sitting at $28,250 at time of writing. For more details, click HERE 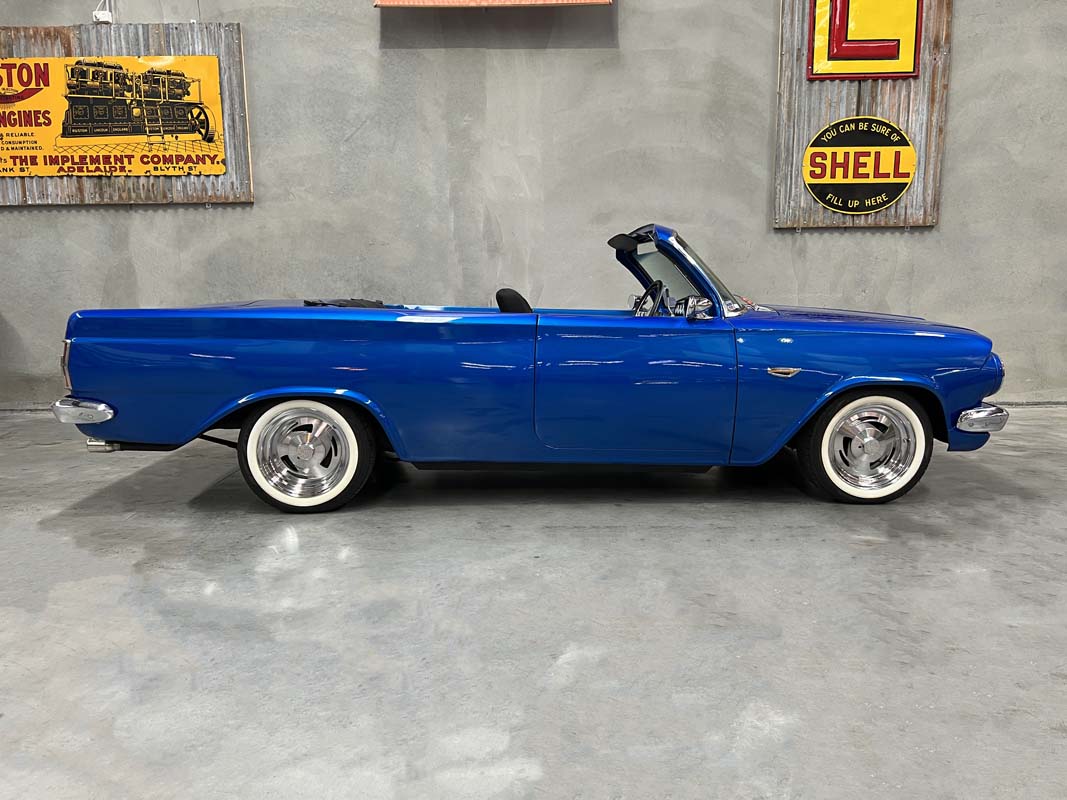 Now here’s something you don’t see every day! Although it’s described as a convertible, there’s no folding top mechanism visible on this custom EH, suggesting it’s a roadster and a fair-weather car only.

In addition to the roof chop, the rear doors have been filled, while the front doors have had the corners radiused and the handles removed. Nosed and decked, other custom touches include billet mirrors, custom alloy wheels and whitewall tyres. 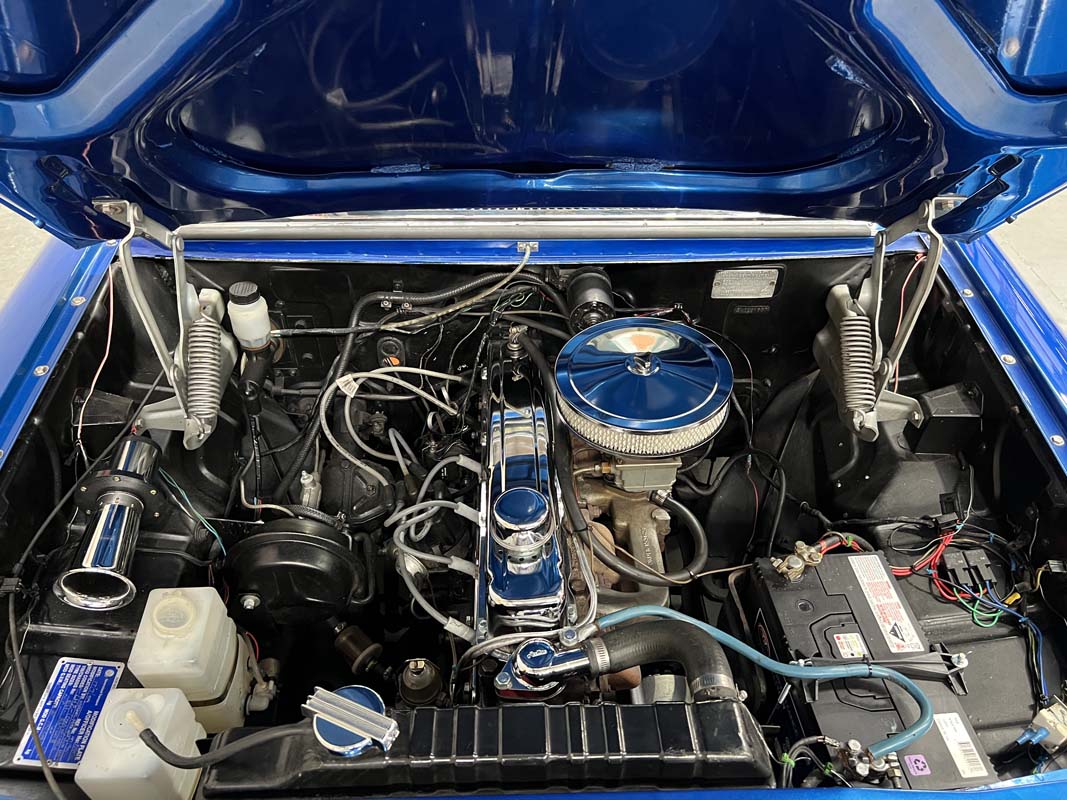 These changes aside, the exterior remains fairly stock, with factory grille, lights and bumpers. It’s a similar story under the bonnet, with a 202 six-cylinder engine fitted, matched to a Trimatic 3-speed auto transmission.

The front end has been upgraded with HR parts, including disc brakes, with the metallic blue paint extending into the interior 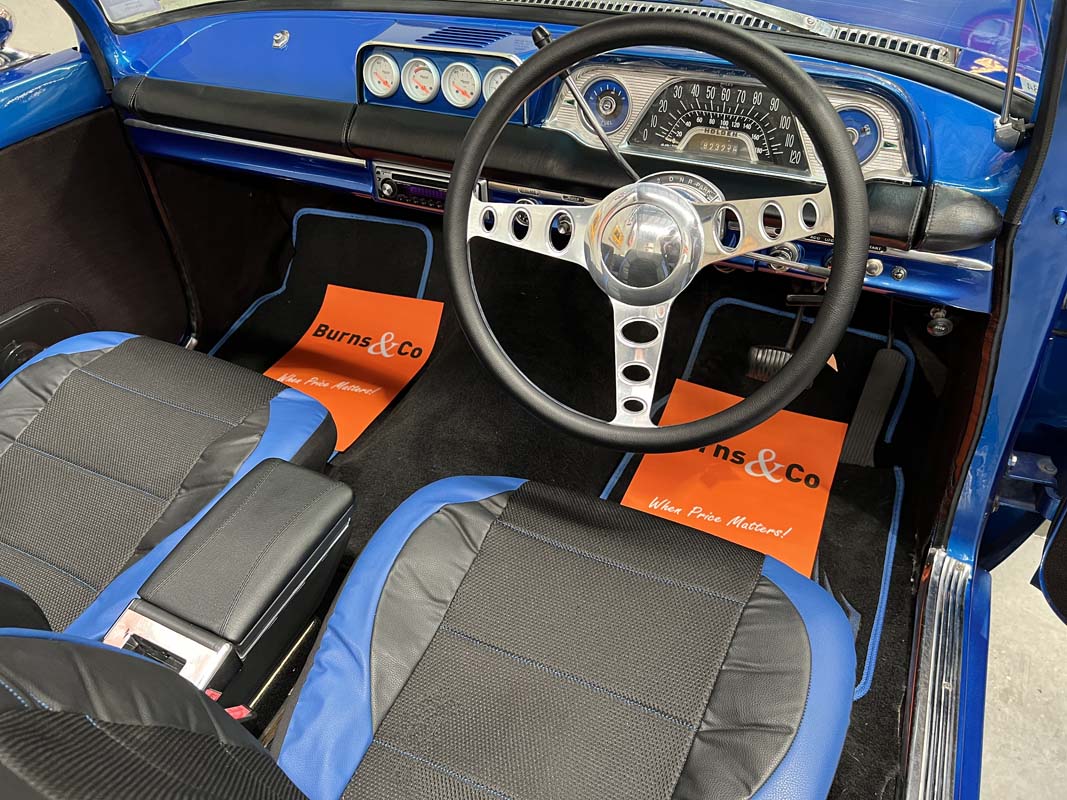 In the cabin, custom front bucket seats and a custom rear bench seat are trimmed in blue and black, with a custom billet steering wheel fitted and a quartet of auxiliary gauges added in an old-school pod atop the dash, with a modern Kenwood sound system added below. 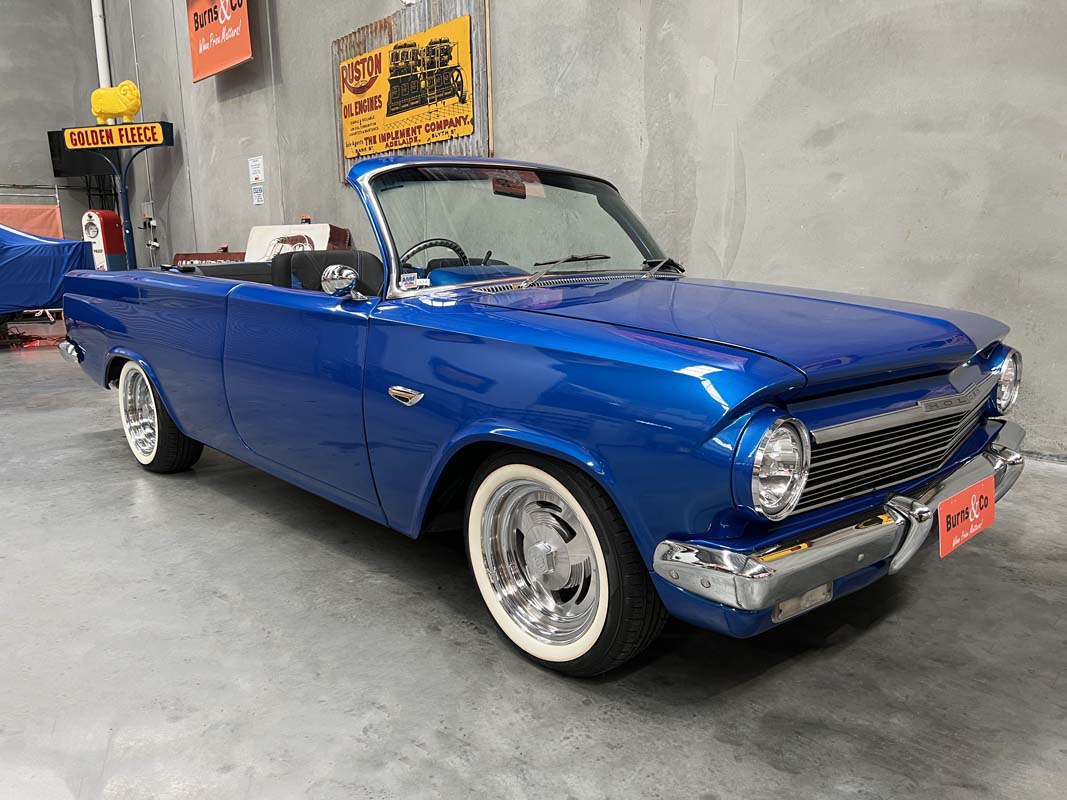 Documentation provided with this unique car shows the conversion work was done in NSW and engineer approved in Queensland in 2009.

Previously on full registration here in Victoria and on club registration at time of consignment, this vehicle will be sold unregistered.

For more details on this one-off Holden, click HERE.

For more details on other lots from this live webcast auction, as well as information on how to bid, click HERE.