Like most enthusiasts, Bob was drawn to the Mustang's lines, unmistakable style and impressive power
Bob Malusa spends his day surrounded by big machines - trucks, that is, at Kenworth trucks at CMV Truck Sales in Cavan, SA. Away from the truck yard, he prefers a different form of horsepower in the form of a classic 1966 Mustang coupe. What started as a schoolboy's dream to own a Mustang finally became a reality for Bob in his fifties.

Like most enthusiasts, Bob was drawn to the Mustang's lines, unmistakable style and impressive power. When it came time to actually purchase a Mustang, Bob's early intention was to get a regular driver that he could use and enjoy as is. A 1966 coupe that appeared for sale in JUST CARS in 2008 fitted Bob's requirements, with the added benefit of being local to the SA-based enthusiast. To Bob, the Mustang looked in pretty good condition for its age, with the only flaw of note being a rusty floorpan. This resulted from a leaking windscreen or vent windows - causing Bob a fair bit of grief as he tried to track down the origin of the leak. Numerous attempts to seal the leak eventually lead Bob to give his Mustang a comprehensive restoration, starting in August, 2009.

Unlike some restorers, Bob wasn't after a screaming performance machine or a heavily modified example, deciding instead to restore the Mustang to as close to factory specification as practical. That meant also keeping the car left hand drive. Papers that came with the car showed it was California delivered from new and originally had a lady owner before it came to Australia. Aside from the 4-barrel 289 V8, the Mustang hadn't been loaded up with options from the factory, which made the project a little less daunting, too. Despite having a history in vehicle modification and restoration, Bob hadn't seriously taken the spanners to a vehicle in 30 years, so rather than run the risk of damaging his beloved Mustang, Bob turned to some experts and experienced friends to bring the project to fruition.

With the commitment made to restore the Mustang from nose to tail and top to bottom, Bob first turned to Rod Kilvington of Pony Parts in Dernancourt, SA. Rod turned out to be not only a great source of spare parts at good prices, but also invaluable advice. Bob then drafted in his brother-in-law, Len, to start stripping the body back ready for the new paint and the abundance of new and rebuilt gear the Mustang was going to be treated to. Being a retired panel beater and painter, Len brought a lot of expertise to the project, and being Bob's brother-in-law, he also came cheap! Stripping the body back revealed that, floorpan aside, it wasn't too bad. The usual problem areas in the sills, doors, bottom of the A-pillars, boot floor, etc, were all good, suggesting that Bob's Mustang had either been well stored, or treated to a restoration sometime in its past.

While Bob and Len prepared the body, a steady supply of replacement parts were coming in from Pony Parts, including all the weather strips, dash pad and fascia, door trims, regulators, and badges. Under the bonnet, Bob's Mustang came with an A-Code 289 V8 when purchased, and this was completely overhauled to original specs by Jaaz Automotive in Newton, SA. The C4 auto was also overhauled to factory spec, with Autocheckers in Blair Athol given that job. A new wiring loom was fitted, followed by a new front end, brakes, bushes, bearings and seals. As mentioned, Bob wanted to keep the Mustang as close to factory specification as possible, so the drum brakes were retained. By the end of the running gear refurbishment, Bob estimated that the only component still in its original, as-purchased state was the diff.

The water damage to the interior had made the carpets unusable, so these were replaced, as was the underfelt. The seats (non-Pony) were good enough to be re-used, as was the headlining and all the glass, but the shabby door trims were replaced. The dash pad had suffered the usual sun damage, so it and the dash fascia were treated to new items from Pony Parts.

Work and family demands made this very much a "weekend" project, so the project was well into its second year when the body was primed and ready for paint. Bob described the final stages of wet rubbing and preparing the body for paint as the most drawn out process of the project, but thanks to the keen eye of his brother-in-law, the 'Stang was finally ready for painting by late June, 2010. Thanks to his contacts in the trucking industry, Bob knew he could trust the Truck Factory in Burton with the task of painting the Mustang. The car had been repainted a different shade of red at some point in its history, but by deciphering the VIN, Bob worked out that the correct paint code for his car was Signal Flare Red, one of two factory reds available in 1966, the other being Candyapple Red. With that information in hand, the Truck Factory produced a very good match to the factory colour, which has an almost orange tinge to it in certain kinds of light.

By October 2010, the final assembly was close to complete, and the refurbished Mustang was ready to enjoy. Since then, Bob has been enjoying his Mustang, whilst ensuring it stays as 'resto-fresh' as possible by keeping the Mustang undercover and regularly pampered. Despite being a project that took over two years to complete, Bob said it all came together relatively easily, and that for his part in the project, it didn't require much more than a 1/2 to 9/16 inch ring spanner and some enthusiasm! Despite this, Bob doesn't think he'll tackle another resto job like this one again. He told us the best part of the project was getting it out and about around the Adelaide hills.

Bob thanks the following for their help in bringing his project to fruition:
Rod and Tony Kilvington at PONY PARTS, Dernancourt, SA;
AUTOCHECKERS Transmission Specialist, Blair Athol, SA;
THE TRUCK FACTORY Paint and Panel, Burton, SA;
JAAZ AUTOMOTIVE Engine Specialists, Newton, SA;
All my mates who had some form of contribution.

Bob also wants to give a special thanks to his brother-in-law, Len, for all his work on the project.

Since completing this project, Bob has added another Mustang to the garage in the form of a 1969 Mach 1. 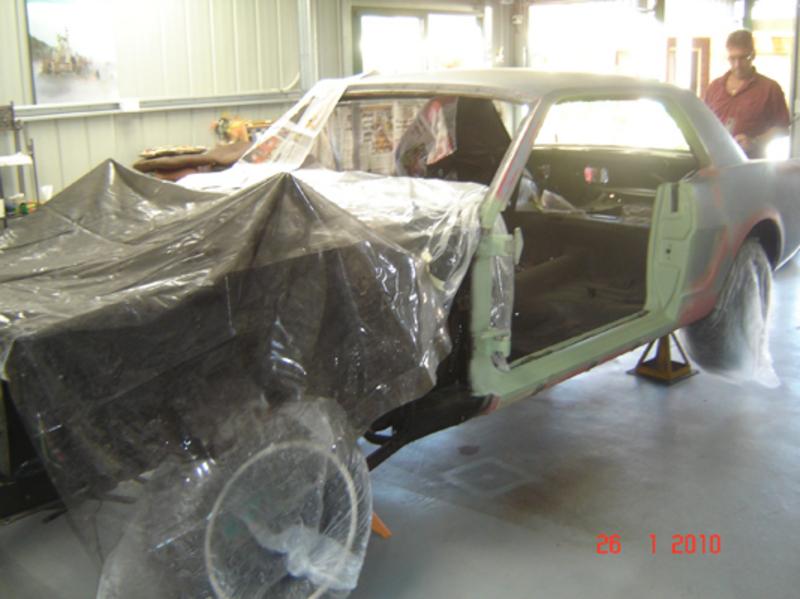 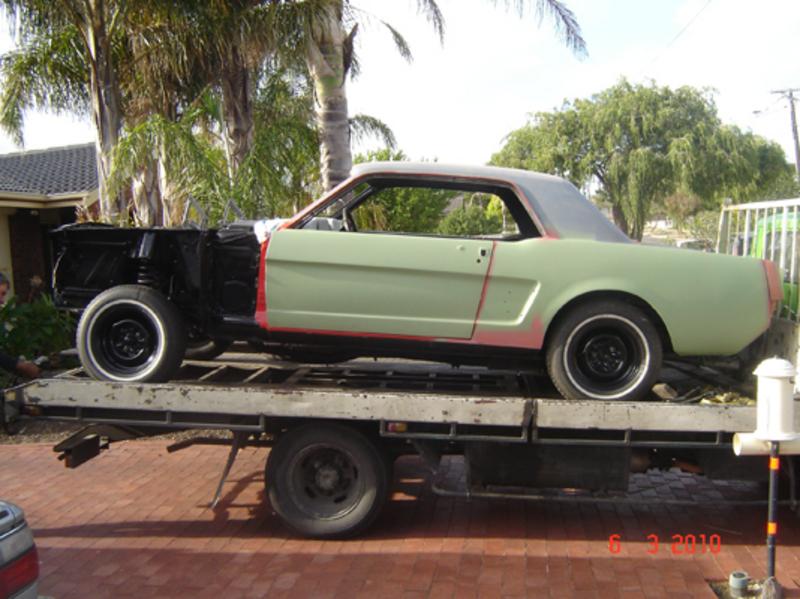 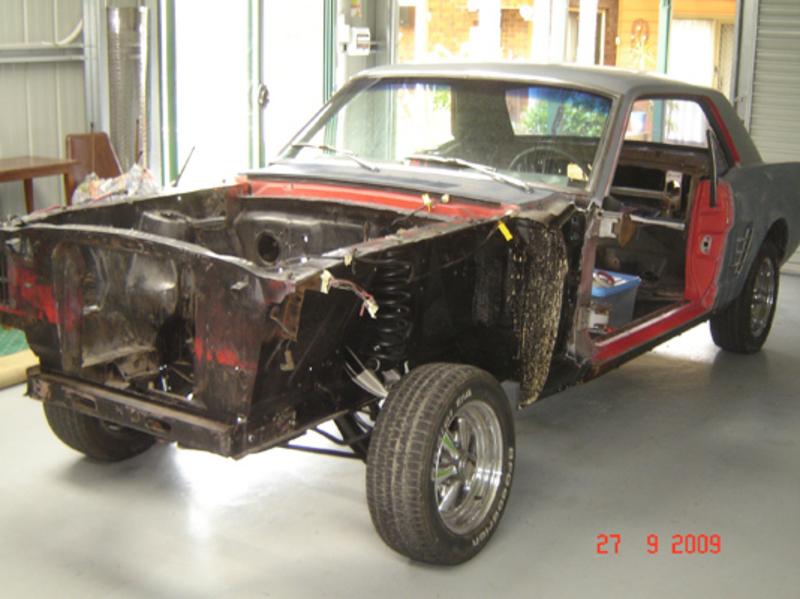 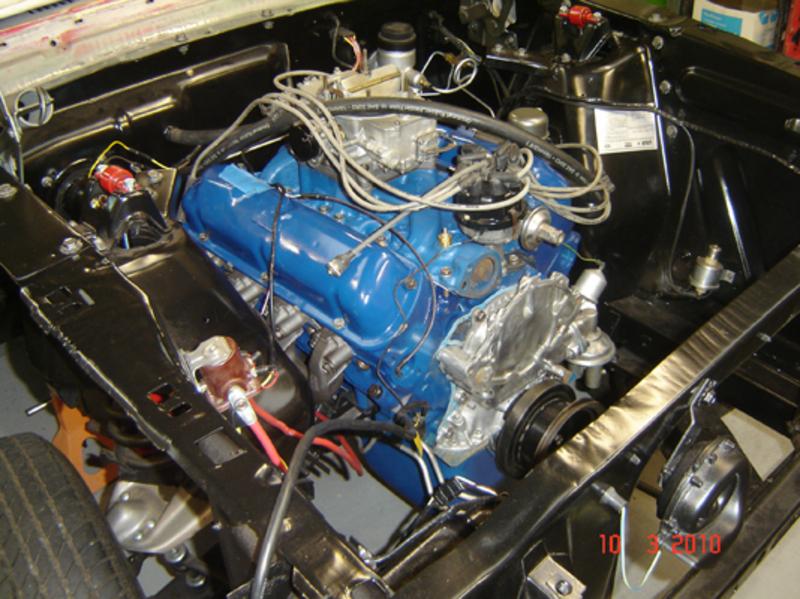 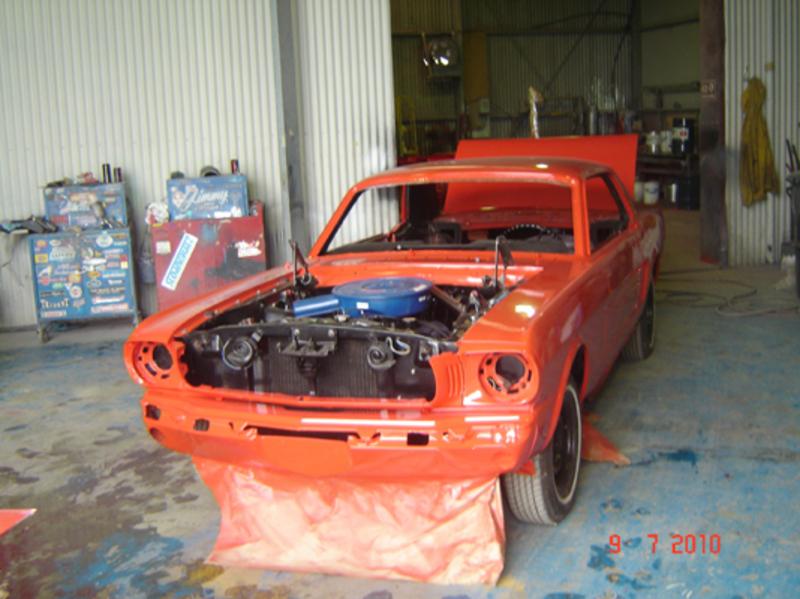