The 'Veteran' theme set by the cars was continued through to the automobilia lots on offer, with several of the engines, spare parts, oil and acetylene lamps, magazines, scrapbooks, letters, photographs, postcards and other items fitting the pre-1905 criteria. Given that the Bonhams auction was held on November 4th, some buyers were able to enter their new purchases in the 2011 London to Brighton run on November 6th, as four of the veteran vehicles on offer had already been pre-entered.

Top seller amongst the veteran cars on offer was an 1899 Panhard-Levassor Type M2F wagonette, which sold for _158,800. Amazingly, this vehicle was one of three veterans discovered in Angers, France, bricked up behind a false wall in a textile factory. With a 1,655cc Daimler-Phoenix vertical twin engine and three-speed transmission, the Panhard was reported as being relatively quick for a veteran, and had been campaigned in numerous events through a succession of owners. Given its age, it was suspected the 1899 M2F may have originally been fitted with tiller steering, but a steering wheel has been in place for all its known history. After a restoration to original specs and colours in 2003, the Panhard had new upholstery and carriage lamps fitted in 2009. This vehicle was pre-entered for the London to Brighton run.

Next best seller was another French car, an 1898 Fisson 8hp twin-cylinder six-seat wagonette. One of the lesser known French marques, Louis Fisson built Benz-style vehicles from 1896, later producing Panhard-style vehicles, characterised by vertical twin engines of Fisson's own design and manufacture. After surfacing in the USA, the Fisson was brought back to the UK in the 1980s and restored, returning to the roads in 1995 and participating in several events, including the London to Brighton Veteran Car Run Centenary event in 1996. The 1898 wagonette is believed to be the sole surviving example of the Panhard type of Fisson still in existence. That rarity was reflected in its sale price of _156,600.

A more recognisable name, in the form of Renault, was another good seller at Bonhams' London auction. The 1902 Renault 8hp Type G is significant in that it was the first Renault to feature the 'coal scuttle' bonnet later to be identified with all early Renaults. 1902 also marked the year when Renault began manufacturing its own engines, but the lot on offer used a period-correct 8hp De Dion engine. After serving time in the USA as an engineering study, the Renault was restored in the late 1980s and campaigned there, before coming to the UK after spending a few years in Japan. A veteran of the last ten London to Brighton runs, the fully restored Renault's _89,500 sale price included an entry into the 2011 event.

Amongst the other veterans, the most interesting was arguably the 1901 Sunbeam-Mabley Cycle Car. An early automotive product from the famous Sunbeam works in Wolverhampton, the cycle car was characterised by its unusual wheel layout, with the two 'side' wheels being driven, and the front and rear wheels in the diamond pattern taking care of the steering. Seating was 'vis-à-vis', but facing sideways! Power came from a single cylinder De Dion 2 3/4hp engine, which was slung alongside the front wheel. A starter - and finisher - in twenty Brighton runs since the 1970s, the Mabley is one of four known survivors of an estimated 130 built. The quirky nature of the 1901 Mabley no doubt appealed to a number of bidders, as it eventually sold for _65,300, almost double the pre-auction estimate.

Another rarity was the 1902 Deckert 8hp two-seater, believed to be the last remaining example of the marque. Like most other veteran marques, the Deckert used a De Dion engine, with side-mounted radiator panels in the style of Renaults of the period. Unusually, the rear axle is unsprung, but the body is, while the front of the chassis carries full elliptic springs. The 'Aurore' bonnet badge was a continuation of the name Deckert applied to pushbikes manufactured before the French firm turned to automobiles. Restored in 1994, the Deckert had been used for several Brighton runs since and sold for _66,400.

The remaining veteran lots included an American-built 1989 Daley quadricycle and 1904 Pope-Tribune Model II 6hp two-seater runabout. The former sold for _44,400, while the latter went for _34,500. A 1904 Talbot Type CT2K tonneau that has been in the same family for 84 years was the only veteran not to sell.

The star amongst the automobilia lots on offer was undoubtedly the Cadillac child's car. Scratch built to resemble the debut Cadillacs of 1903, the scaled down Delivery Van style vehicle featured an aluminium and wooden body over a steel chassis, 17 inch wheels, button upholstery and was beautifully finished in 'Imperial Maroon' over 'Poppy' red paint. Fitted with cable drum brakes, forward and reverse gears, and working acetylene headlight, the electric-powered child's car sold for _3,500. Other automobile lots to sell well included bound volumes of the Autocar magazine formerly belonging to the Rootes group's Lord Rootes himself, which sold for _8,750, and a scrapbook of photos and memorabilia from the Gordon Bennett Cup races of 1903, which went for _2,500. Oddities include an enamel 'petrol priming kettle' which sold for _438, a cigarette case in the shape of a veteran car, which went for _688, and a detailed, 26cm long scale model of Henry Ford's 1896 quadricycle, built in the 1980s and featuring real rubber tyres and leather seat, which sold for _875.

For more details on these and more lots from Bonhams' London veteran auction, go to www.bonhams.com

All prices inclusive of buyer's premium.

All images courtesy of Bonhams. 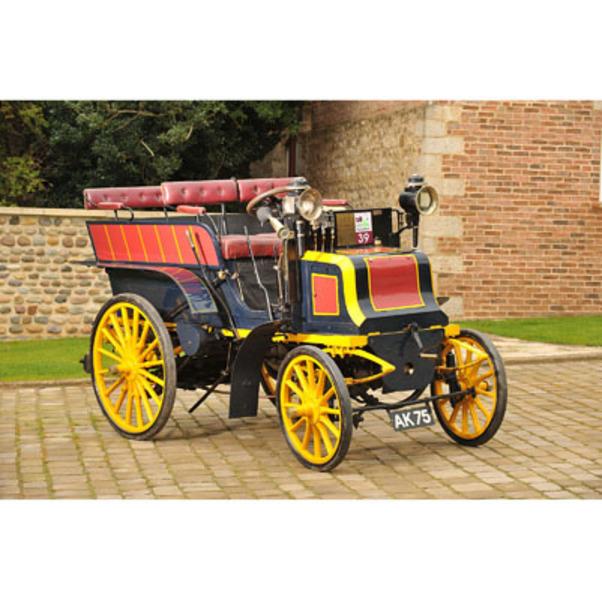 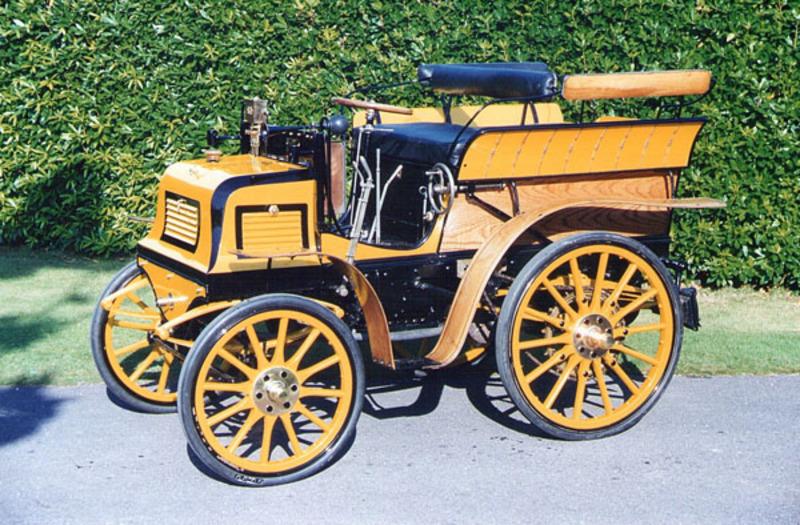 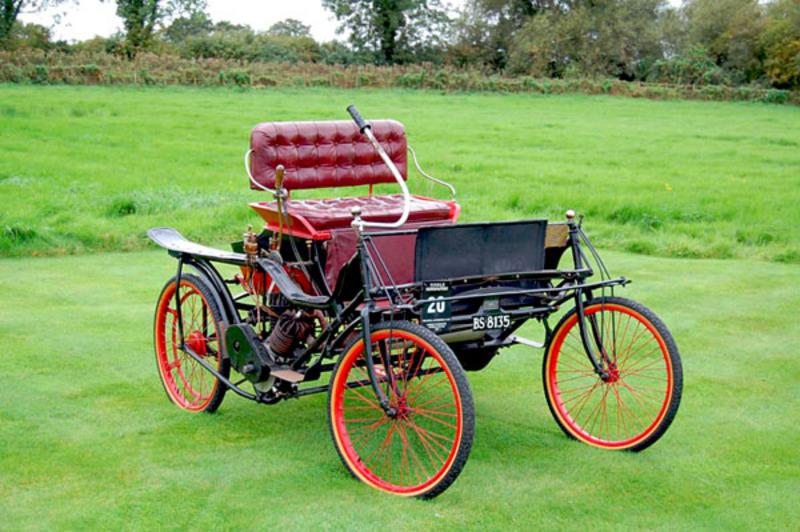 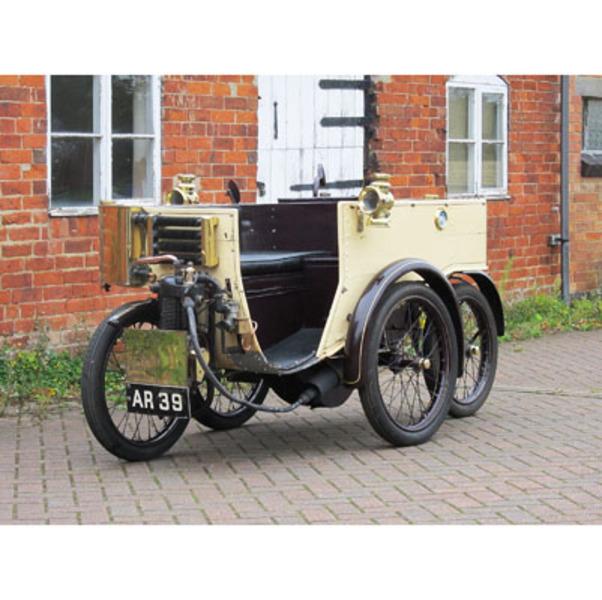 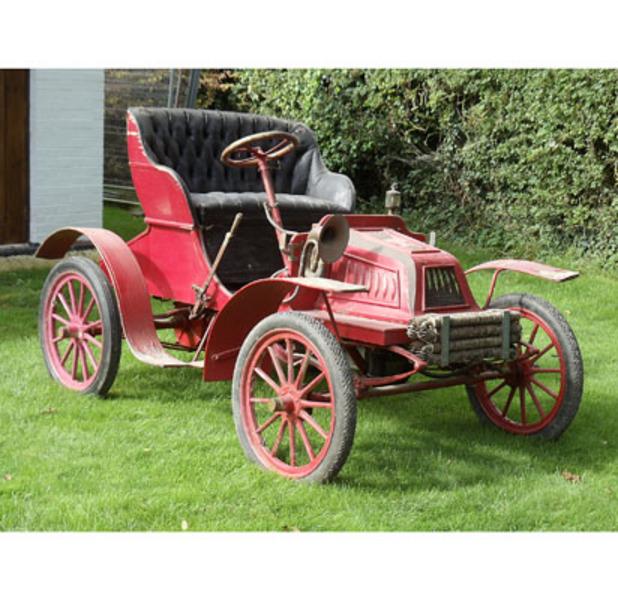