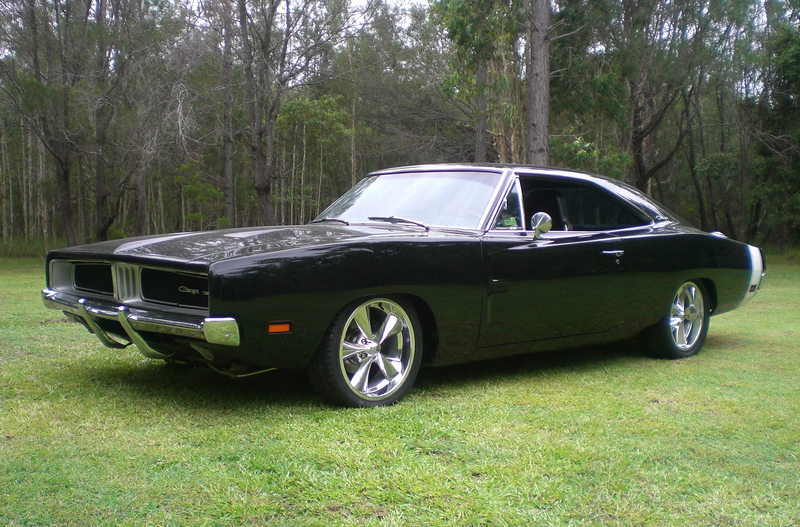 It is one of the muscle car icons of the '60s and now extremely collectible. The Charger along with its stablemates - the Dodge Challenger, Plymouth Roadrunner and Plymouth Barracuda were the best selling cars on the US muscle car scene.

The Charger was Dodge's flagship machine, powered by its famous 440 Magnum or 426 Hemi engines - both blisteringly quick!

The Charger has a long history and inevitably companies tend to roll out their iconic nameplates from time to time on models which do not do them justice. So it is with the Charger, with the Charger name given to some unworthy models over its 40-year history. While this sullies the reputation of the Charger a little, it is still an enviable powerhouse that captured the hearts of performance enthusiasts around the globe.

The first production Charger was built in 1966, with a prototype displayed in 1964 based on the 426 Polara. There was also a 1965 Dart produced with the Charger 273 name. Just 180 models were built based on the Dart GT hardtop or convertible, all painted in yellow!

The classic Charger debuted in January 1966 as a response to the Mustang and the fastback Barracuda. Dodge was desperate to have a car that appealed to a younger market. The Charger was based on the Dodge Cornet, but with a fastback roofline and unique front clip that resembled the Cornet, but had retractable headlights, giving a sporty look. Despite the Charger name being spelled in large block letters across the full width of the single, full width tail light, the Charger was basically another variant of the Cornet - albeit a very special one.

The Charger had muscle car written all over it from the very beginning. It was powered with serious grunt from the 318 V8 (5.2-litre), 383 V8 (6.3-litre) to the mighty 426 Hemi (7.0-litre). The street version came with four individual bucket seats and an instrument panel that was unique to the Charger, featuring four large round pods directly in front of the driver. Both manual and autos had a floor shift located between the front seats. The 318 V8 came standard with a 3-speed manual, while the bigger engines came with either a 4-speed manual or the Torqeflite automatic.

The Charger was always prominent with its size a full 22-inches longer than a '66 Mustang. The '67 Charger was basically a carryover of the '66 model, with the addition of some chrome stripes and upgraded interior trim. The 440 Magnum V8 was now offered and despite an imposing road presence, sales actually halved from that of the debut year to 15,778 units, with just 118 of these specified with the Hemi powerplant.

Second generation: 1968-1970
It could have been just as easy for Chevrolet to drop the Charger from its lineup in1968, but bold new restyling was its saving grace. The new "Coke bottle" look made the Charger one of the best looking muscle cars, with many experts considering it the best looking performance car of the 1960s - although the '69 model could also easily claim the title. It had a new hidden headlight grille, curvy body, recessed backlight, refined tail and minimal use of chrome. It had a bold, blunt nose, muscular wheel arches and square cut hardtop roof, all in perfect balance.

This era of Charger is often best remembered for the famous TV versions, with the classic car chase sequence in the 1968 Steve McQueen film Bullitt, in which the villains drove it. Perhaps the most famous Charger was the orange "General Lee" on the Dukes of Hazzard, which used a 1969 Dodge Charger. The windows were always open and the doors were welded shut, with the number '01' painted on both doors. The muscle car performed spectacular jumps in almost every episode, and the show's popularity produced great interest in the car. Hundreds of Chargers were purchased for the shows stunts, with at least one destroyed in each episode!

The '68 Charger carried over the chassis and suspension from the first Charger, on a 117-inch wheelbase, although the '68 model was stretched another 4.4-inches longer over the '67 model. The powertrains were carried over, with the base level Charger models equipped with the 318 V8 standard. The top performance model - called the R/T (Road/Track) - was powered by the 375hp 440 V8. Three and four speed manuals and three-speed auto transmissions were offered. The 383 V8 was offered as an option on regular Chargers, while the 426 Hemi was available in the 467 Charger R/Ts. The '68 Charger was a sales hit, with 96,000 Chargers produced for 1968.

The '69 Charger saw minimal change with the most prominent being the split front grille and redesigned elongated tail lights. A backward step for 1969 was the introduction of the underpowered 3.7-litre slant six engine (of which 500 were actually sold), while on a more positive note was the introduction of the Charger 500, built unashamedly to win stock car races. The Charger had a number of aerodynamic problems and the '500' addressed these with a massive rear spoiler and a flush mounted front grille. The 500 enjoyed some racing success, with no other car matching its 200mph top speed, but Dodge engineers felt they could do better.

The result was the most extreme Charger of the lot - the Daytona, which was introduced in April 1969. Built in a limited run of just 500 for motorsport purposes, the Daytona had a massive rear wing and pointed fiberglass nose to improve its aerodynamics. The Charger Daytona was bold and radical and this paid off on the racetrack where the Daytona topped an incredible 322km/h. The Daytonas were available with either the 440 or the 426 Hemi, and were also street legal.

The last and rarest of the second generation Chargers was the 1970 model, which now featured a large wraparound chrome bumper and a return to the single piece grille. There were a host of detail changes, and inside were higher backed bucket seats and the ignition was removed from the dash to the steering column. The SE "Special Edition" model added extra luxury items and was available as the 500 SE and R/T SE models. An all new pistol grip gear shifter was introduced along with the first bench seat in a Charger. A new engine offered for the first time was the 440 Six Pack. With three-barrel carburetors and 291kWs it had previously been used in the Plymouth Road Runner and Dodge Super Bee.

The Dodge Daytona was dropped from the 1970 Charger lineup. The third generation Charger followed in 1971 and while still an impressive beast, it was the beginning of the end of the muscle car era. The Charger model line continued until 1978 and was then replaced by the Magnum. Unfortunately the credibility of the Charger continued to deteriorate as the auto industry moved the emphasis from performance towards luxury, safety and economy.