Trophy Magnet. A trophy winner since it was first built, this ’32 5-window has still got plenty of silverware left in it.

As far as hot rod builds go, a ’32 Ford, and in particular a ’32 Ford 5-window or 3-window coupe, is about as traditional as it gets. There’s pretty much an entire industry devoted to servicing this particular model, with everything from repro chassis to bodies (in ‘glass and steel), interiors and all the running gear to match.

As popular and widespread as ’32 Ford coupe hot rods are, there are examples that, through high standards of finish, touches of individuality or both, manage to rise above the pack. The ’32 coupe presented here is one of those examples. 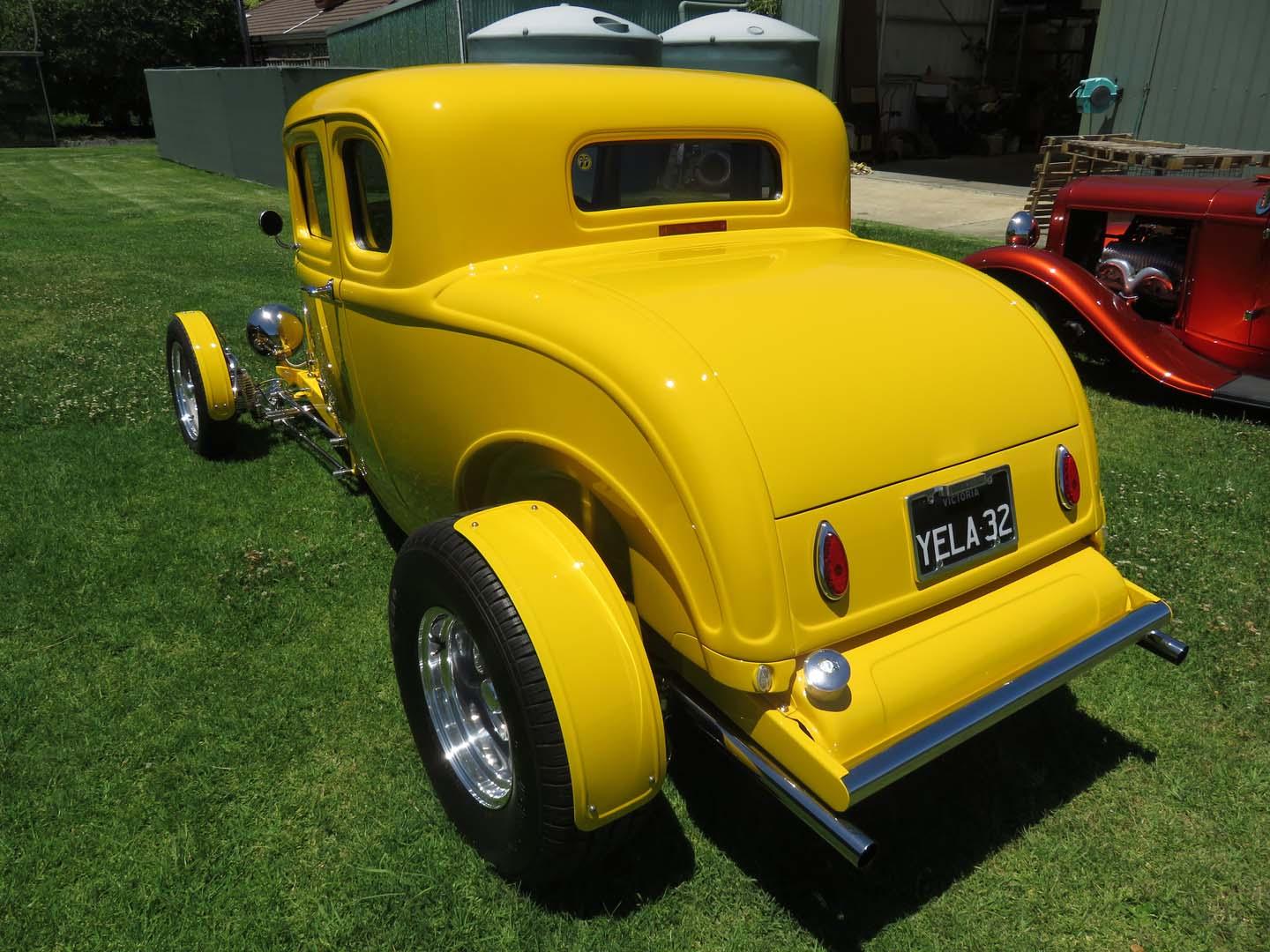 This ’32 Ford 5-window coupe is currently owned by Ron Smith, but was originally built by Pete Fritsch, a Queenslander with a history in hot rodding that stretches back to the 1970s.

Pete has sampled the various sub-categories of the rodding world, with a ’23 T-bucket, ’32 Ford roadster and ’34 Chevs amongst his past builds, but this ‘32 coupe is probably the cream of the crop.

Almost a decade in the making, the Ford was the result of everything Pete had learned in his previous builds, and impressively, most of the grunt work was done by Pete himself in the family garage.

That being said, this build was going to be something special, so Pete called on specialists throughout Queensland and Northern NSW to ensure he got the best of the best. But before we get to that, the core of this build needs to be clarified. 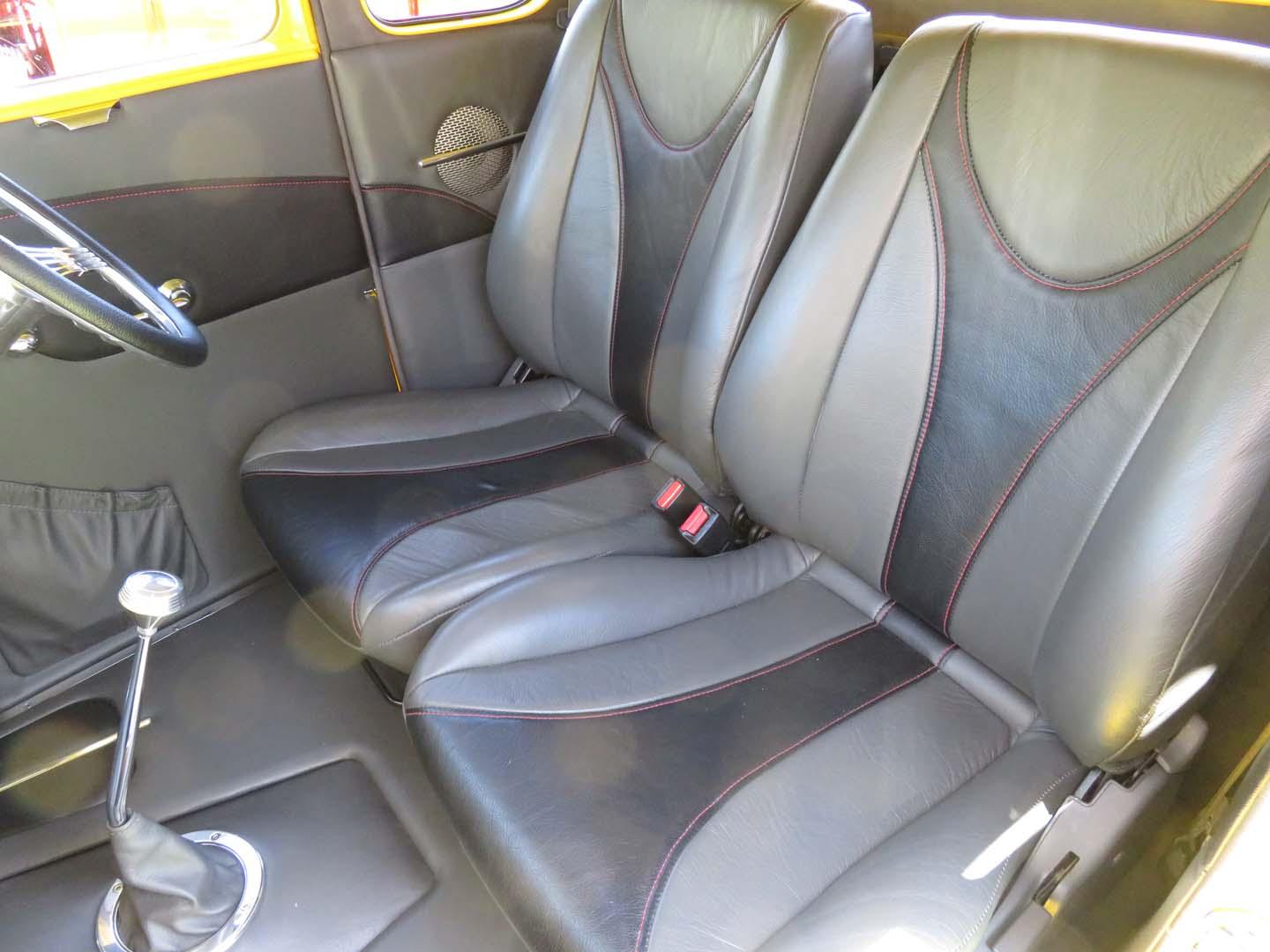 Starting with ’32 chassis rails, Pete had these boxed from nose to tail and added his own touches, like beefier cross-bracing and enlarged spreader bars. The front crossmember was repositioned lower in the rails, which explains why this coupe has a lower stance than you’d expect for a hi-boy.

The body is a Deuce Customs fibreglass ’32 5-wndow, with full bonnet and side panels. To enhance the stance, this body was modified a little, too.

The touches of individuality that Pete applied started with those stance changes and extended to the choice of a Ford 5.0-litre V8 for the powerplant, instead of the usual - and easier – route of a 350 Small Block Chev.

Sourced from a late-model Fairlane, the Windsor V8 was matched to a C4 automatic, which was later fully rebuilt and fitted with a shift kit. This, in turn, was connected to a shortened XY Falcon diff with a 3.5:1 ratio.

While Pete handled the chassis mods and getting the body ready for painting, the driveline was entrusted to Mark and Gary Opperman in Bethania, QLD.

On the engine, the Oppermans gutted the factory innards and added a Comp Cams camshaft and roller rockers, MSD ignition and a 750cfm Holley carb on an Edelbrock Performer intake manifold.

The 2-inch exhaust system was handcrafted by Steve Cook of Cookies Custom Pipes and delivers what Ron says is a nice note while still being street legal.

To bring some bling into the engine bay, finned rocker and sump covers from Cal Custom were fitted, with a finned diff cover added, too.

A Walker radiator was chosen to handle the cooling, with all the hoses to suit cut and fitted by John Finch. John also applied the same touch to the Falcon-based power braking system, which uses braided lines throughout.

The suspension is four-bar at each end, with a Superbell drop axle fitted up front and polished stainless steel components used throughout.

As well as the engine and diff work, the Opperman brothers handled all the electrical work, too, which included wiring for the in-cabin comfort features that were one of Pete’s key requirements when conceiving this build. This ’32 coupe was going to be a driver, not just a show car, so the interior appointments needed to reflect that. 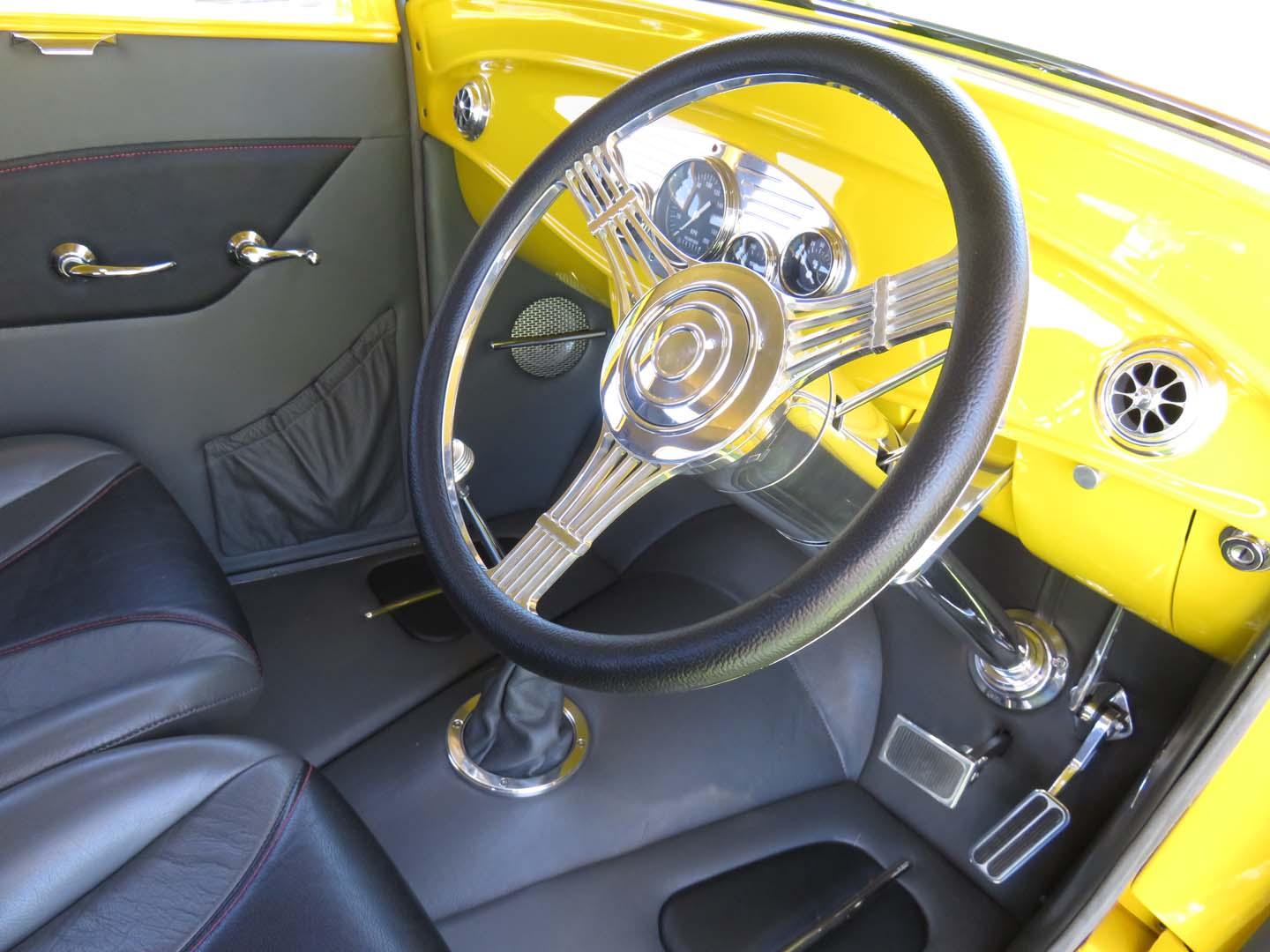 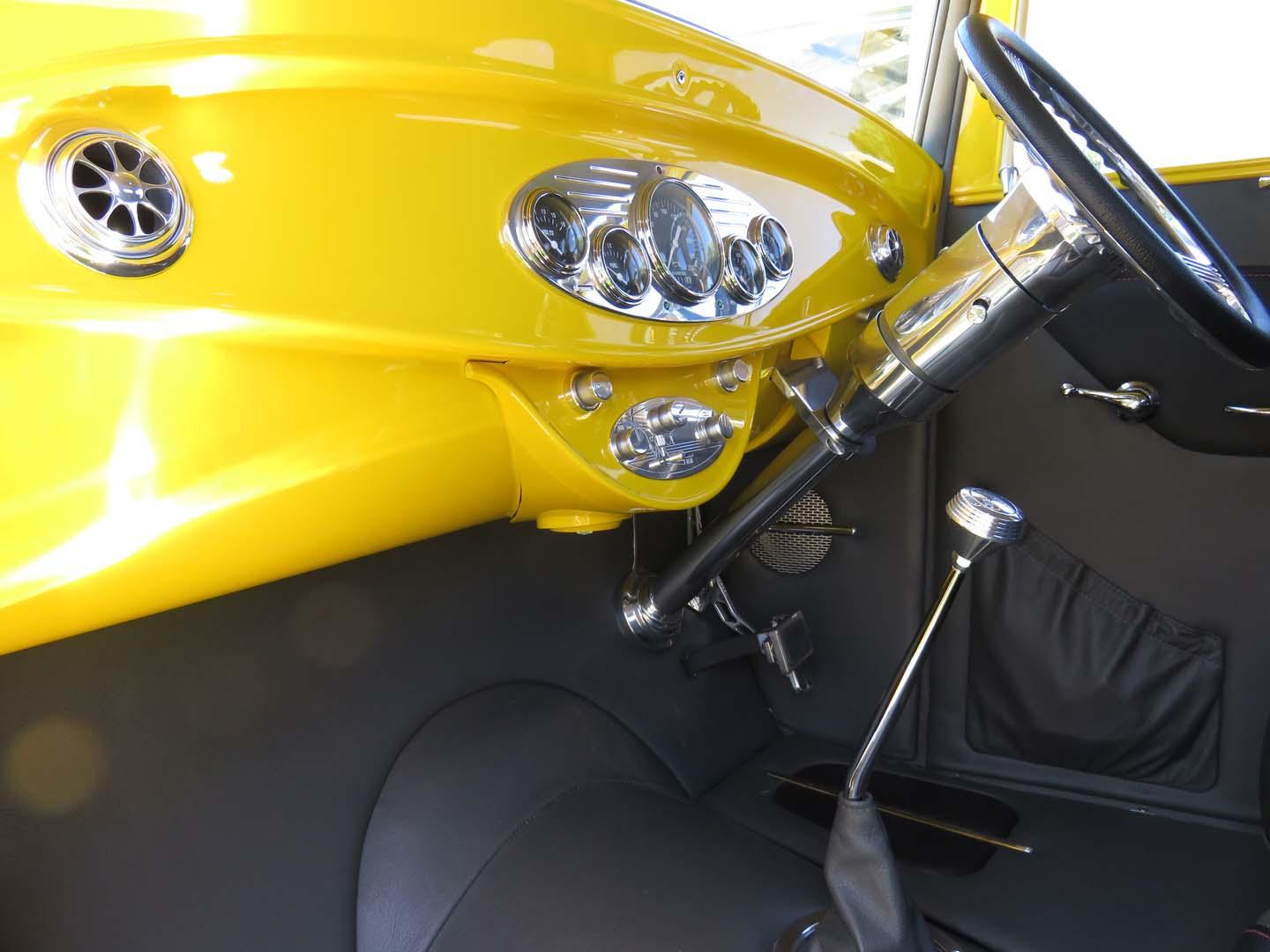 Hot Outside, Cool Inside

Given this rod was originally built in the Sunshine State, the bright yellow paint seems appropriate.

It’s actually a Mazda colour, more commonly seen on late-model Astinas and Pat’s Pro Restos in Beaudesert, QLD, was tapped to do the paint.

After what’s been described as a long preparation period, the painting started with the chassis, and extended to the engine block and heads, gearbox, tailshaft and diff. Even the rear springs and front brake components got the Mazda yellow treatment.

Speaking of brakes, they’re 11-inch Falcon discs up front, fitted with VS Commodore calipers, while Falcon drums are on the rear, controlled by a Ford master cylinder with a 1 1/8-inch bore.

Pat’s painted the body, too, and it’s impossible to argue with the quality of the end result. Today, many years after it was completed and with hundreds of miles covered on the road (and the usual damage that entails), the paint still looks great.

The Japanese connection started with that Mazda paint continued with the seats, which are compact units from a late-model Suzuki - but fully retrimmed, of course. The trimming was handled by Brett’s Upholstery in Murwillumbah, with the grey & black leather on the seats extending to the door cards, boot area and even the floor.

These seats were chosen primarily for their comfort, which is why a Vintage Air air conditioning system was also fitted - for cool cruising in the Queensland heat. Electric windows and a modern stereo system that’s Bluetooth compatible were also part of the build.

With all this kit, Pete reasoned that all-day cruising shouldn’t be a problem, so he decided to put his fresh Coupe to the acid test by taking it to the annual Valla Rod Run – about a six-hour drive away - immediately after it was completed in late 2010. The run was trouble-free and the quality of the finished build was rewarded with a Top Ten trophy. 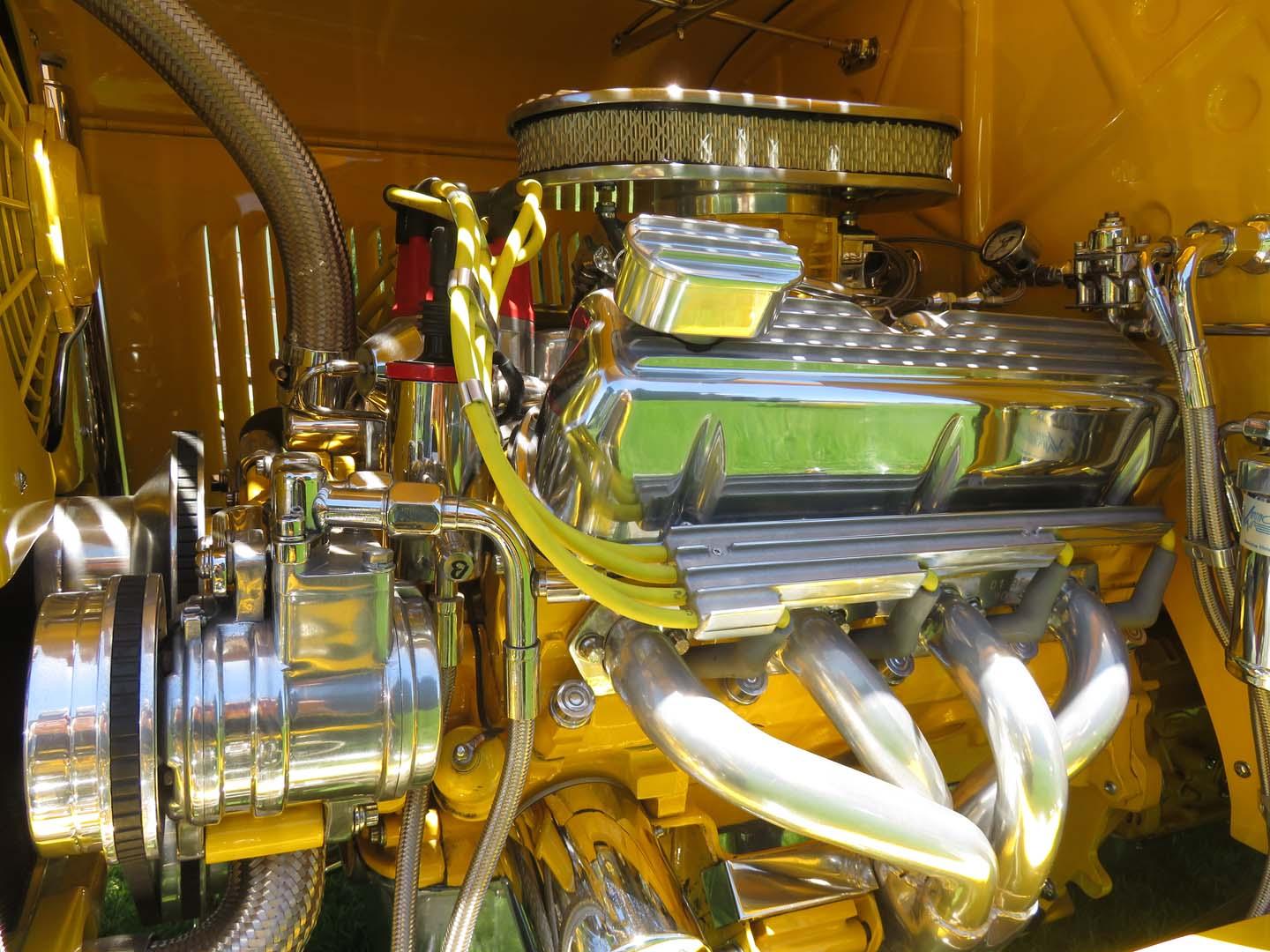 In Pete’s hands, the coupe became a regular sight on the show car circuit from 2011 onwards, with multiple appearances at MotorEx, as well as hot rod shows in Queensland and New South Wales, winning trophies at pretty much every event it was entered in.

The coupe first came to Ron’s attention at the 2014 Victorian Hot Rod Show, where it won Top Coupe, Top Hot Rod and the show’s Top 5 to further add to the silverware.

When Ron saw the coupe again at the Queensland Hot Rod Show 18 months later, it had a ‘For Sale’ sign on it. Ron was in the middle of a frustratingly drawn-out build of a ’30 Ford Coupe at the time, which got him thinking.

“I calculated roughly how much, in time and dollars, it was going to take to finish my Model A coupe to a similar standard and I decided to sell the A and contact Pete and try to buy his car instead,” Ron explained.

Flying to Brisbane with good mate Terry Coventry to check out the vehicle up close and get all the details of its build from Pete, Ron was the car’s new owner a day later.

As purchased, the coupe needed nothing, but Ron’s still added his own touches to the car since bringing it down to Victoria. These include fitting a Billet Specialties steering wheel and ’32 Ford interior door handles with matching window winders. 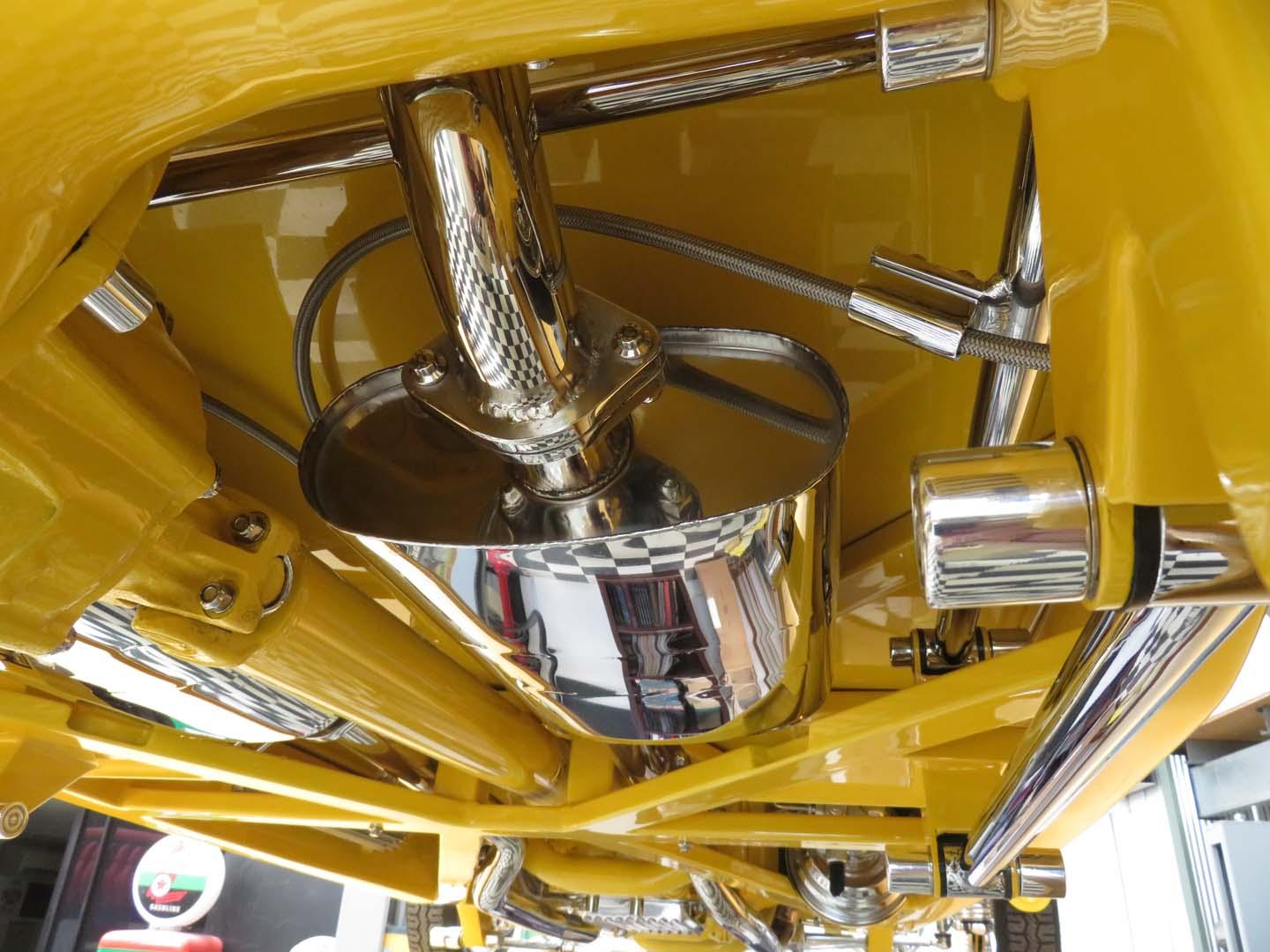 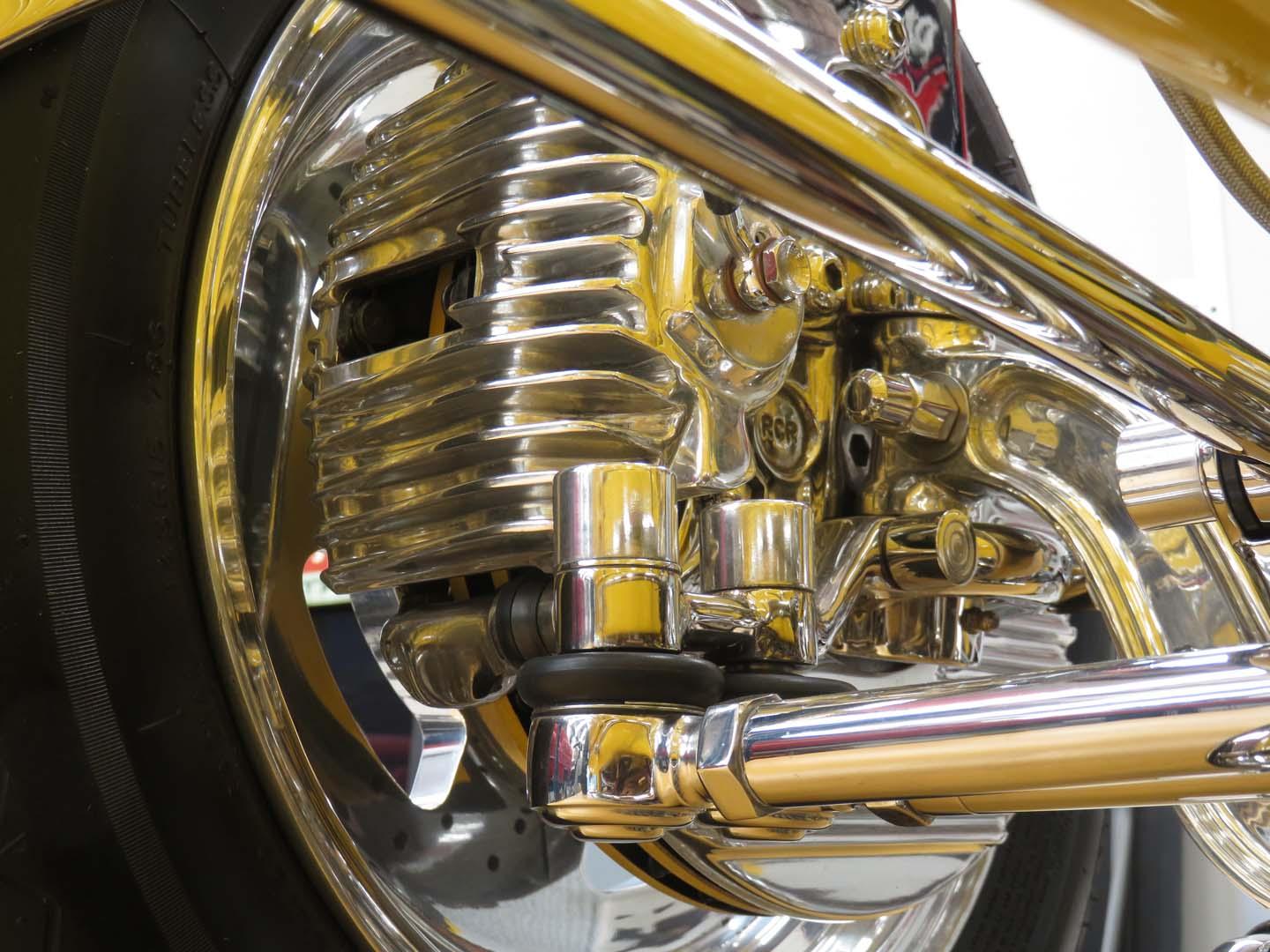 Before Ron bought the car, Pete had already swapped out its original Torq Thrust II-style wheels for a limited-edition (1 of 100) set of ‘Lobeck G’ 15-inch alloys from Billet Specialties. The rod still wears these today, matched to 145 R15 front and P265/70 R15 rear tyres.

In Ron’s hands, this rod’s trophy-winning performance has continued, with 31 awards across both he and Pete’s ownership. If health problems weren’t forcing a sale (see breakout), it’s likely that Ron would still be running it around the show circuit to this day and bringing home more silverware for the pool room!

“I love its exhaust note and the fact I can just get in it and cruise,” Ron answered when asked what he loves most about this rod. It’s one he’ll regret parting with, but it’s one that Ron says the next owner will enjoy.

As far as ’32 coupes in this country go, this is one of the best and has a long trophy list to back that claim up. A ’32 Ford coupe may be seen by some as “ordinary” in the world of hot rodding, but this example proves that a ’32 coupe can also be extraordinary.

Please note this vehicle was successfully sold via JUST CARS and is no longer available.

Got a Hot Rod you’re looking to sell? List it for sale with https://www.justcars.com.au/ 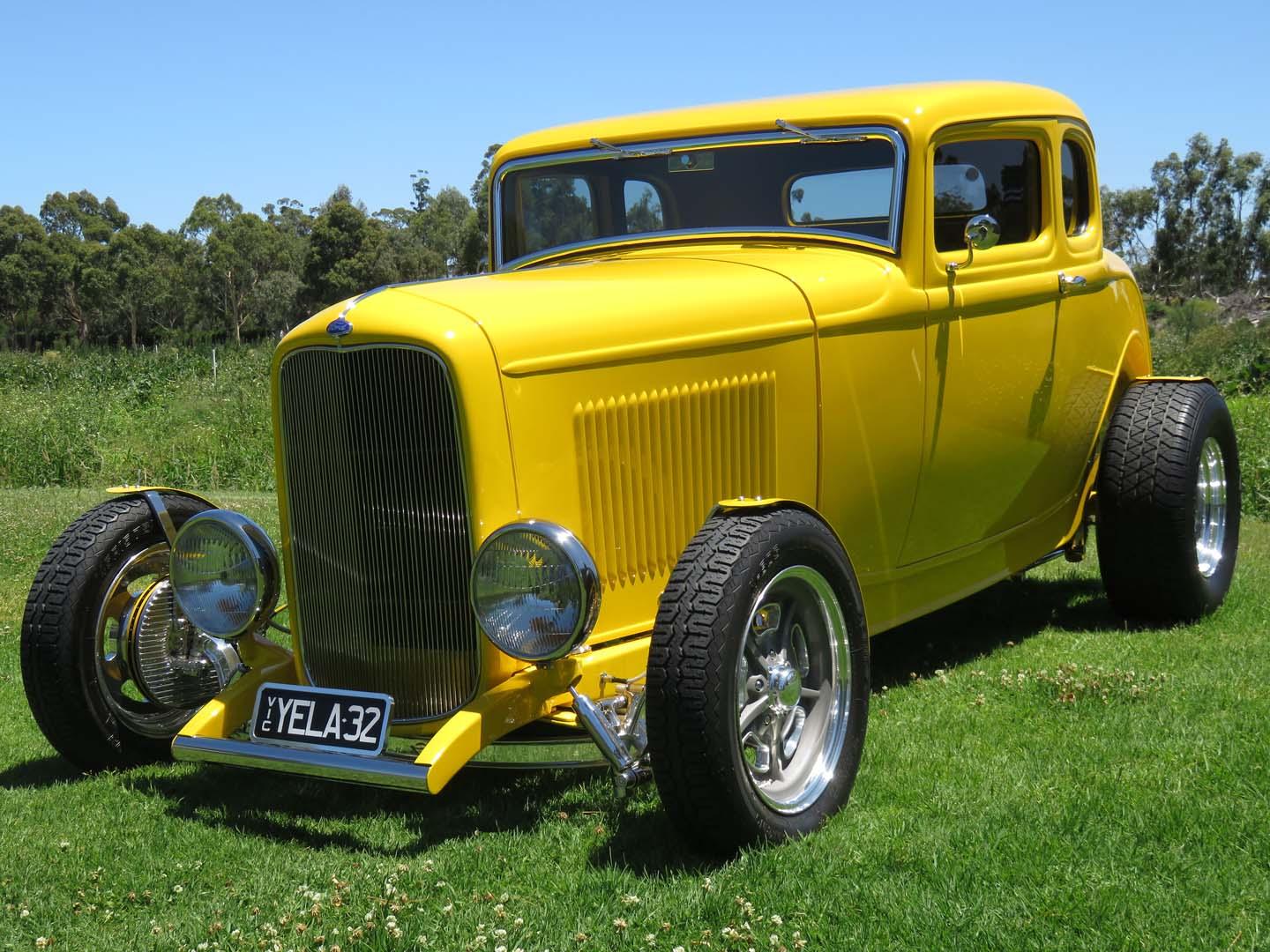 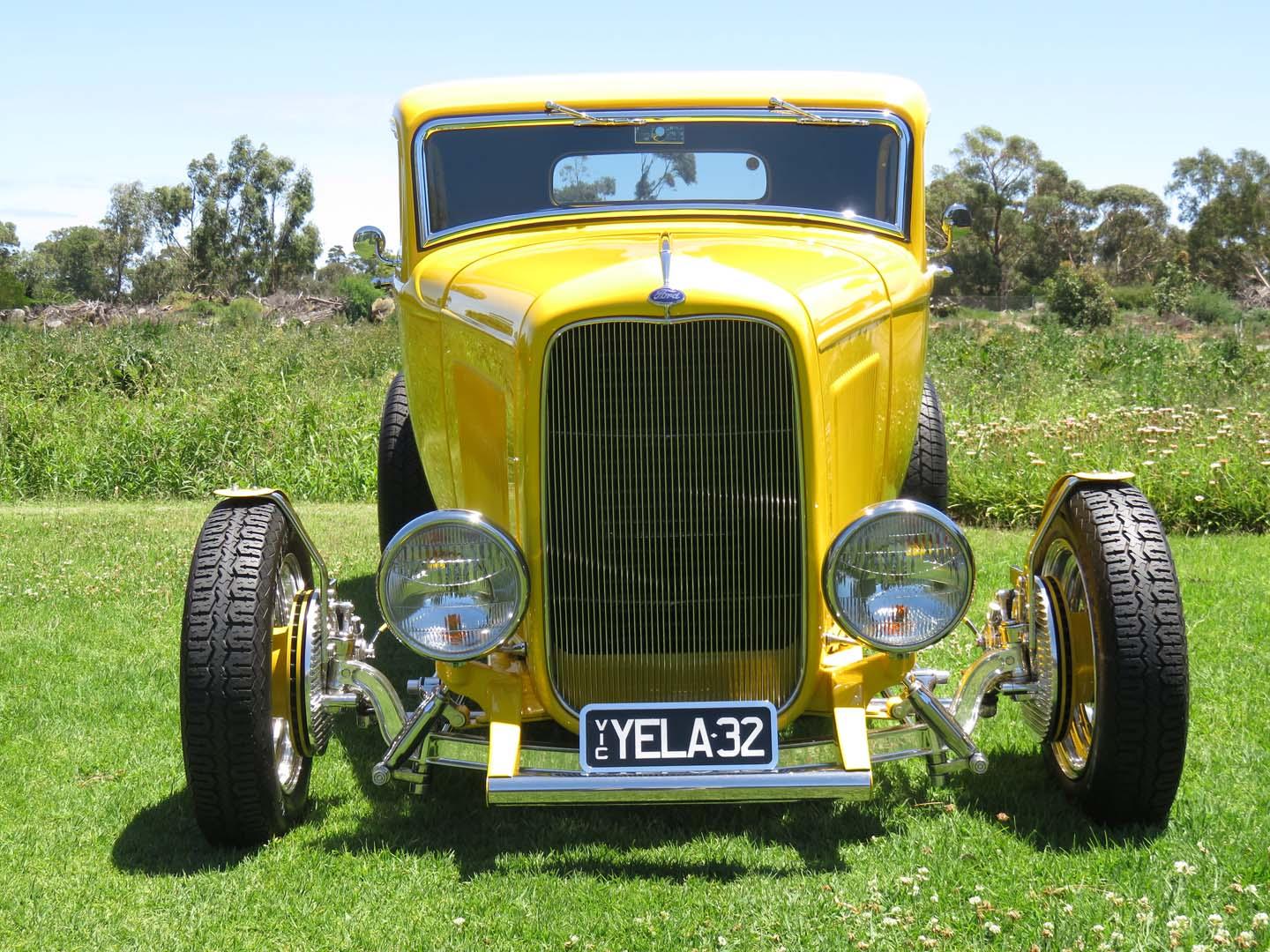