As well as being a surviving example of a rare model, this Peugeot also has an interesting history.

At time of writing, the 2021 Olympic Games in Tokyo are just around the corner, which means we'll soon be glued to our TV screens, cheering on our Aussie team and becoming instant experts on sports we know nothing about and only pay attention to every four years.

What does all this have to do with a classic Peugeot? Quite a bit, actually, as a much earlier Olympic Games played a part in this car’s history. 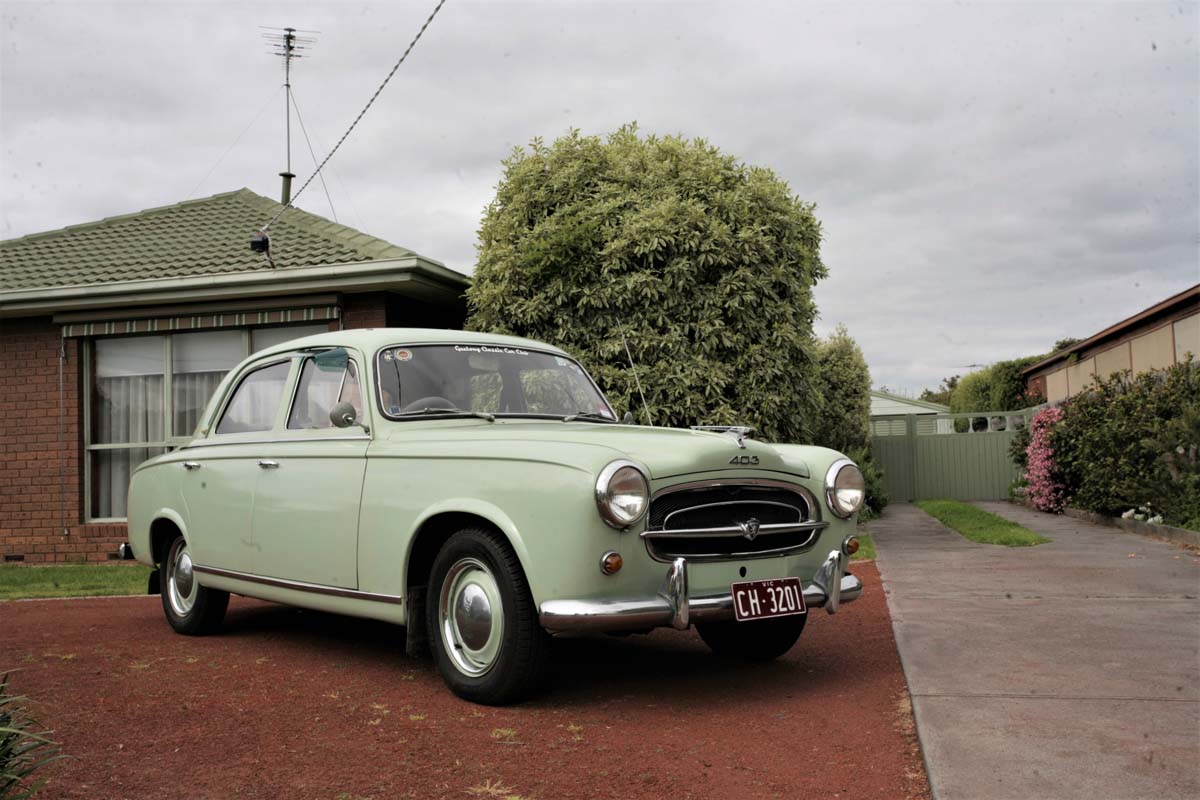 French car enthusiasts love their cars and one of the most devoted of those enthusiasts is Colin Chappell, who owns the vehicle featured, a 1956 Peugeot 403. The fact he’s owned this car since 1988 – 33 years – gives you an idea of that devotion.

This 403 isn’t the first French car Colin has owned, and if the Geelong-based enthusiast has his way, it won’t be his last, either.

The French car affair started with a 1958 Simca Aronde, which was his second car after a 1950 Austin A70.

After picking up his first Peugeots – a pair of 203s that he paid a mere $15 each for – Colin was off and running, with a 404 wagon, 504 sedan, 504 wagon, two 404 utilities and a 405 SRI sedan in the garage at various stages, as well as the 403. That garage is a multi-car unit, by the way, as Colin also had a Chrysler Royal and rare Willys Aero Ace sedan occupying the space at time of writing.

Past garage occupants have included EJ and HR Holdens, a Ford Capri GT, VW Passat wagon and LH Torana SLR, while VC, VL and VP Commodores, a Corolla and a BA Falcon have been more recent occupants.

Colin’s a member of four car clubs, too: the Western District Historic Vehicle Club, Geelong Classic Car Club, Willys Overland Club and, unsurprisingly, the Peugeot Car Club of Victoria. He’s also been a volunteer at the Geelong Museum of Motoring, which before its closure last year, housed a large chunk of Ford's Australian history.

So, as you can see, cars have been a big part of Colin’s life and while the passion doesn’t start and end with Peugeot, it’s been the marque he’s had the most enduring bond with. 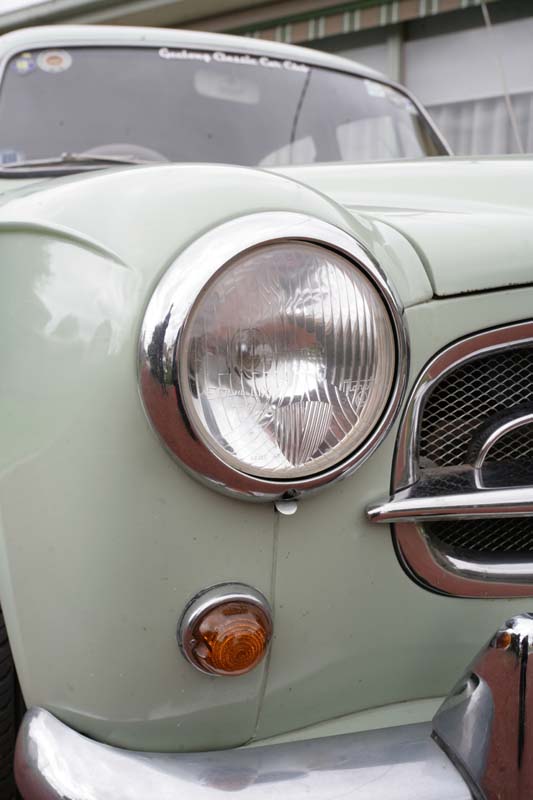 Why Peugeot? When Colin buys a classic car, he buys it to drive, not to look at, so he loves the way that Peugeots drive and handle, especially on less-than-perfect Aussie roads.

It’s these qualities that made Peugeot a very strong seller here for a period, kickstarted by victory in an iconic Aussie event.

Peugeot’s postwar story in Australia started with importation of the 203 model in 1949. The brand sold less than 1,000 units annually for the first few years, but all that changed when a 203 won the REDeX Reliability Trial in 1953.

The first REDeX Trial saw a truly mixed bag of entrants (reflecting the variety of new cars available in Australia at the time), but at the start of the event, few rated the chances of the dumpy little 203 entered by Ken Tubman and John Marshall. However, over a 10,500km route covering a big chunk of the country and comprising as many mud, dirt and sand tracks as bitumen roads, the plucky Peugeot prevailed, winning against 186 other entrants.

The huge press coverage the REDeX Reliability Trial generated did great things for Peugeot locally, with annual Australian sales almost doubling over the next three years, leading to local assembly operations being established in Melbourne and Sydney.

Local enthusiasm for Peugeot was arguably at its peak when the 203 was joined by the more modern 403 model. Debuting in France in April, 1955, and reaching Australian shores later the same year, the 403 was an all-new shape, styled by Pinin Farina, with a new engine, too.

In place of the 203’s 1.3-litre four-cylinder engine, the 403 sported a larger 1.5-litre unit. This was matched to a column-shift 4-speed manual transmission with overdrive and synchromesh on all forward gears. 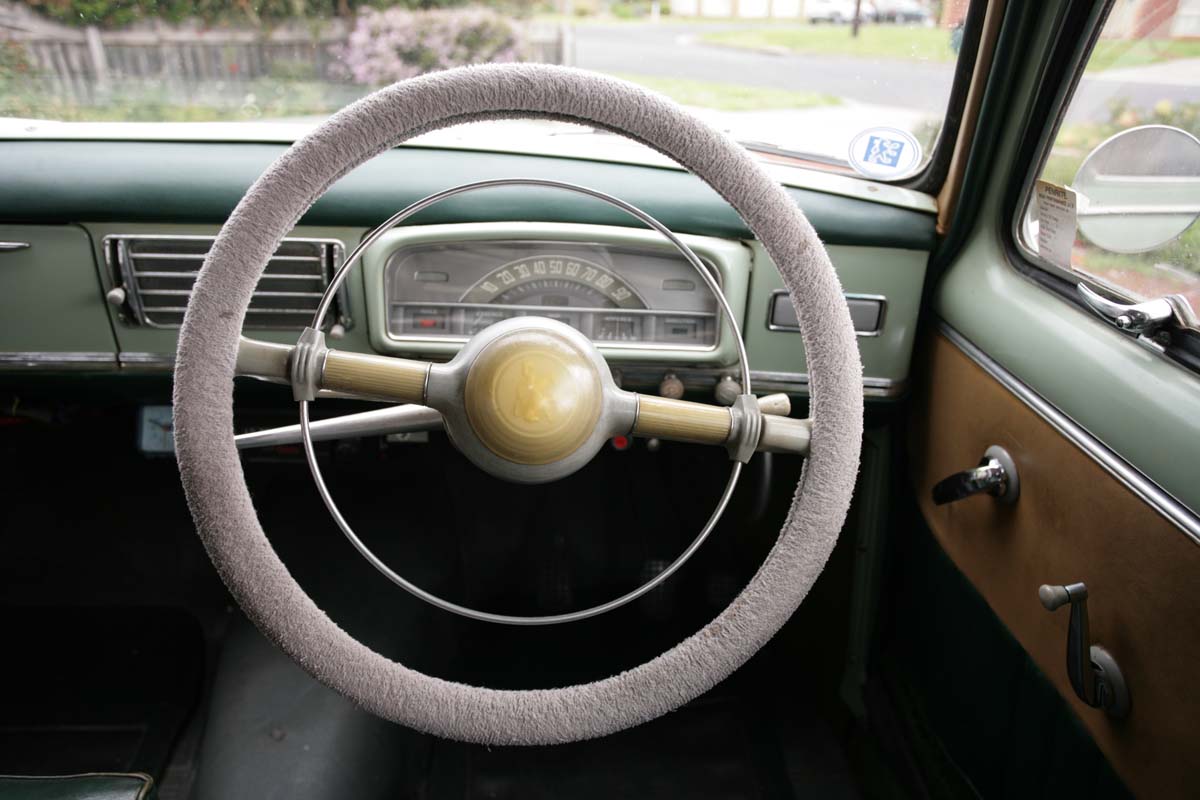 Unusually for the time, the 403’s suspension was made up of a transverse leaf spring at the front and coil springs with a stabiliser bar at the rear, supported by hydraulic shocks all round. Created with French rural roads in mind, this combination was found to be equally suitable for Australian conditions, as proven on reliability events like the Ampol Around Australia Trial, which a 403 won in 1956. 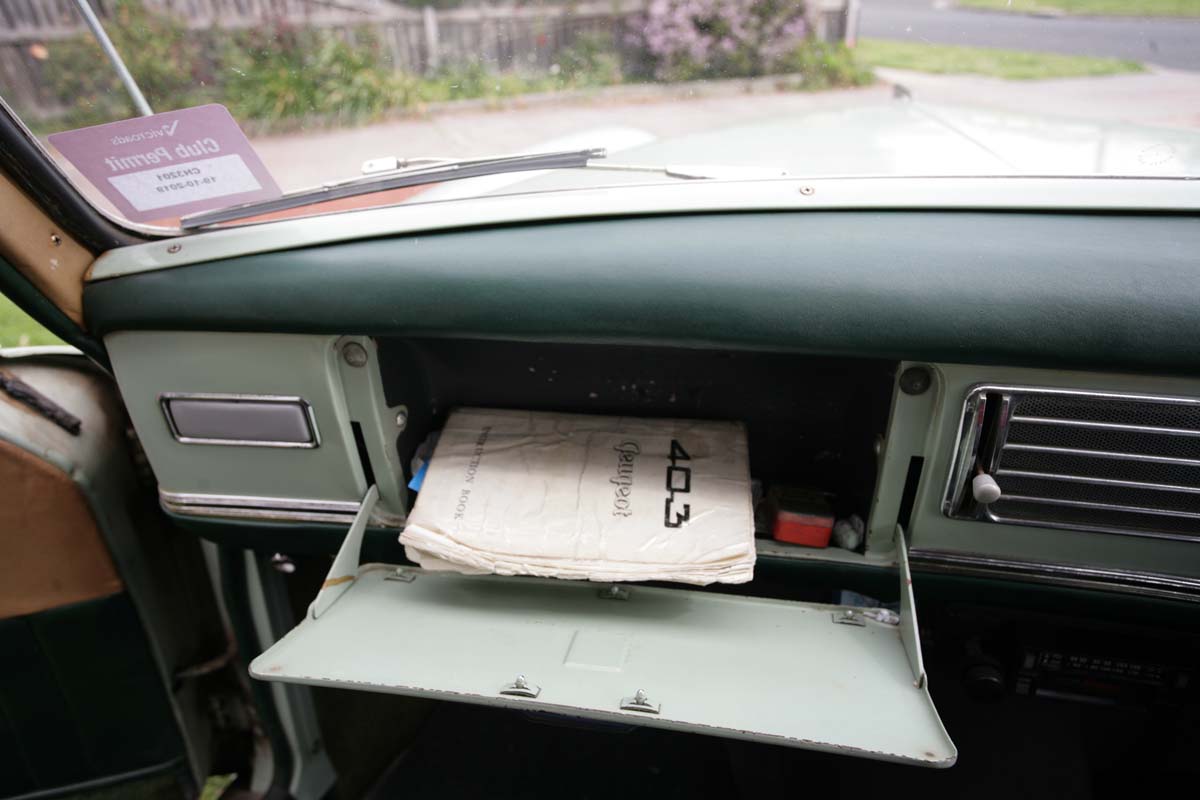 While the REDeX and Ampol Trials captured Australia’s attention in the mid-1950s, another major event hogged the limelight in 1956, and this Peugeot was a part of it. 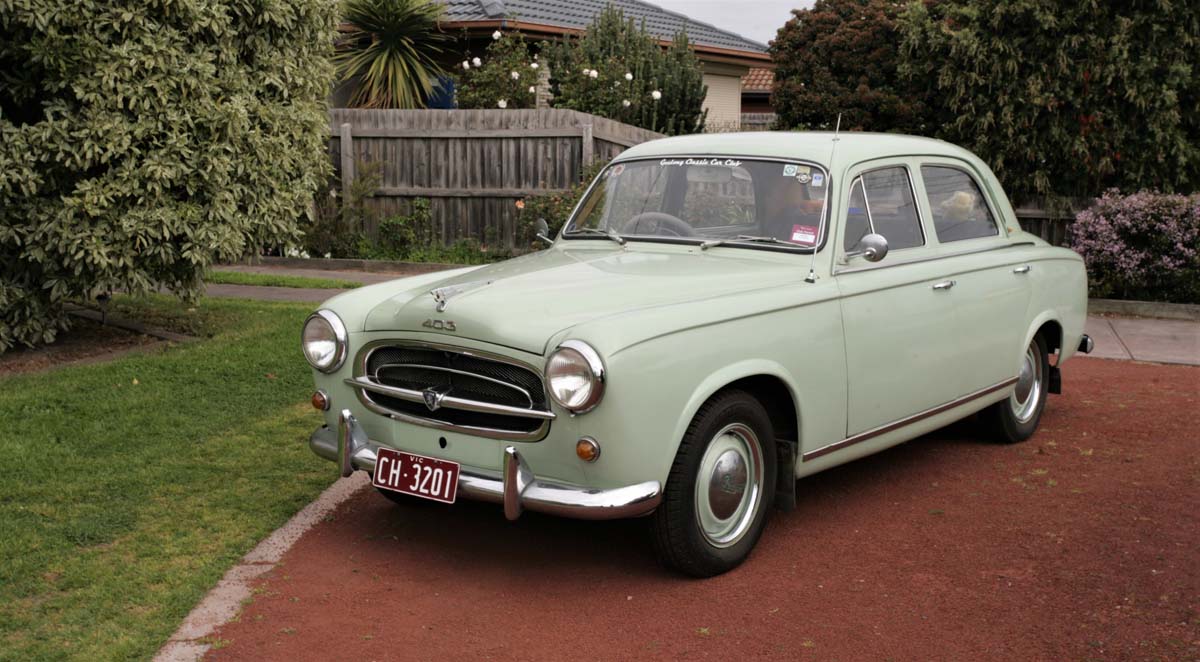 Johnnie and Dawn
The XVI Olympiad (aka 16th Summer Olympic Games) in 1956 was the biggest sporting spectacle to be held in Australia to that time.

Melbourne hosted the first ever Olympics in the Southern Hemisphere and the famous MCG was the base for all the track and field events, as well as the opening and closing ceremonies.

Just over the road from the MCG, a new swimming and diving pool was built for the Olympics, forming part of the Olympic Park precinct.

While not on the scale of recent Olympiads, the ’56 Melbourne Olympics was a big deal, requiring an army of officials and volunteers to bring it to fruition. One of those was E.H. ‘Johnnie’ Walker. According to information that Colin received upon purchasing this car, Walker was a senior official at the Melbourne Olympics and treated himself to a new Peugeot 403 in September, 1956, two months out from the start of the games on 22 November.

Earlier that year, Walker had travelled up to Townsville, where the Australian swimming team was holding their winter training, and developed friendships with several members, including Dawn Fraser.

Back in Melbourne for the Olympics, Walker apparently used his new Peugeot to drive Fraser (making her Olympic debut) and other members of the swimming team from their billets to the new Olympic pool and back for the duration of competition.

One would have thought a Peugeot may have been offered to the French team, but amongst the fleet of more than 300 official and volunteer cars pressed into service back then, there’s no record of the French team using a suitably Gallic form of transport. 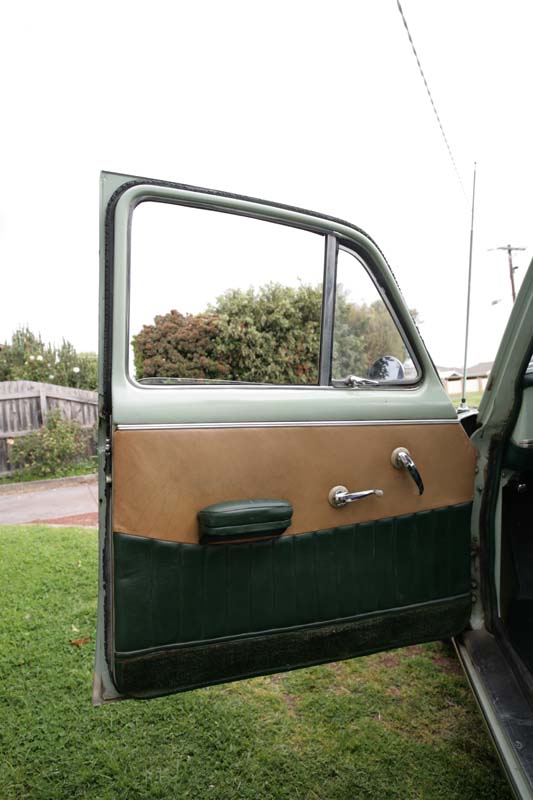 The swimming team that Walker supported were major contributors to Australia’s medal tally – 35 in total - at the ’56 Olympics. Fraser took two golds and a silver, while another Olympic debutant, Murray Rose, won three gold medals.

After its brush with Australian sporting royalty, Walker’s Peugeot returned to more mundane duties and would remain in his possession for almost two decades.

Harold Freeman was the second owner of this car, purchasing it from Walker in 1975. Still in its pale green paint, with dark green leather seat trim, it retained the lion's head bonnet emblem that was a 403 feature from new until 1959, as well as the semphore indicators, mounted in the C-pillar and a feature of early 403s that were also phased out in 1959. Before Peugeot ended production of the 403 in 1966, overdrive would also be deleted.

The 403’s mileage at the time of Freeman’s purchase is unknown, but he drove it regularly in his first five years of ownership. Between 1980 and 1985, the car was subject to a rolling restoration, which is where John Biviano enters the story.

A French car specialist, Biviano oversaw much of this car’s restoration and would assist Colin with repair and refurbishment after he purchased it.

The ’80s restoration included a repaint, new door cards, new headliner and various mechanical replacements and refurbishments, although the original engine and gearbox were retained. 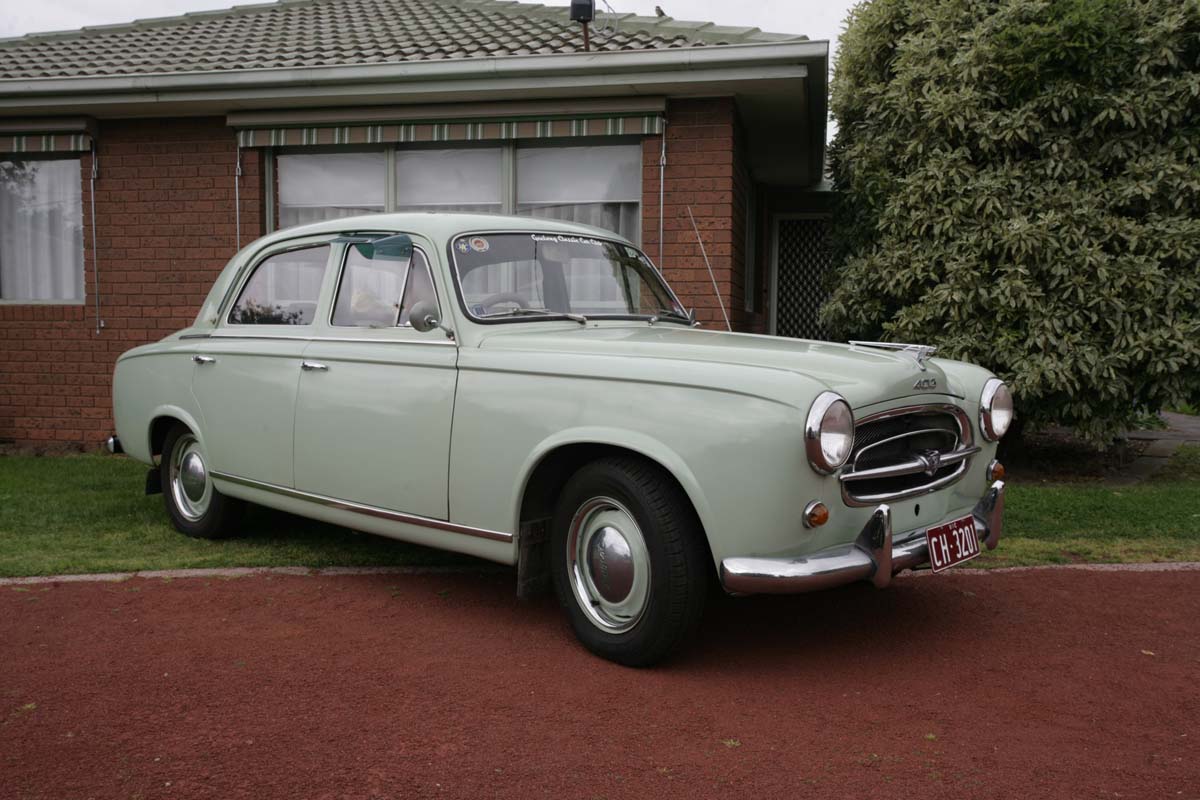 Colin chuckles when he recalls Biviano telling him how the car was treated to a liberal dose of rust-preventing Fisholene during the restoration, after which it became a major attraction with the cats in Freeman’s neighbourhood!

The semaphore indicators in the C-pillar may have been deactivated and conventional indicators fitted during the restoration, although it’s more likely this was done during Walker’s ownership. While not standard, the indicators don’t detract from the Peugeot’s appearance. In fact, all but the most ardent Peugeot 403 enthusiast would assume they’re factory items.

Following completion of the restoration, the car was used sparingly by Freeman, as a new job in the outback meant he required a vehicle even tougher than the 403.

When Colin purchased this 403 in 1988, its condition was a big factor in the buying decision. The car was still fresh from its restoration, so it looked good and needed nothing.

As mentioned earlier, Colin likes to drive his cars, so the 403 would be given a workout in the years that followed, including interstate trips and plenty of club runs. 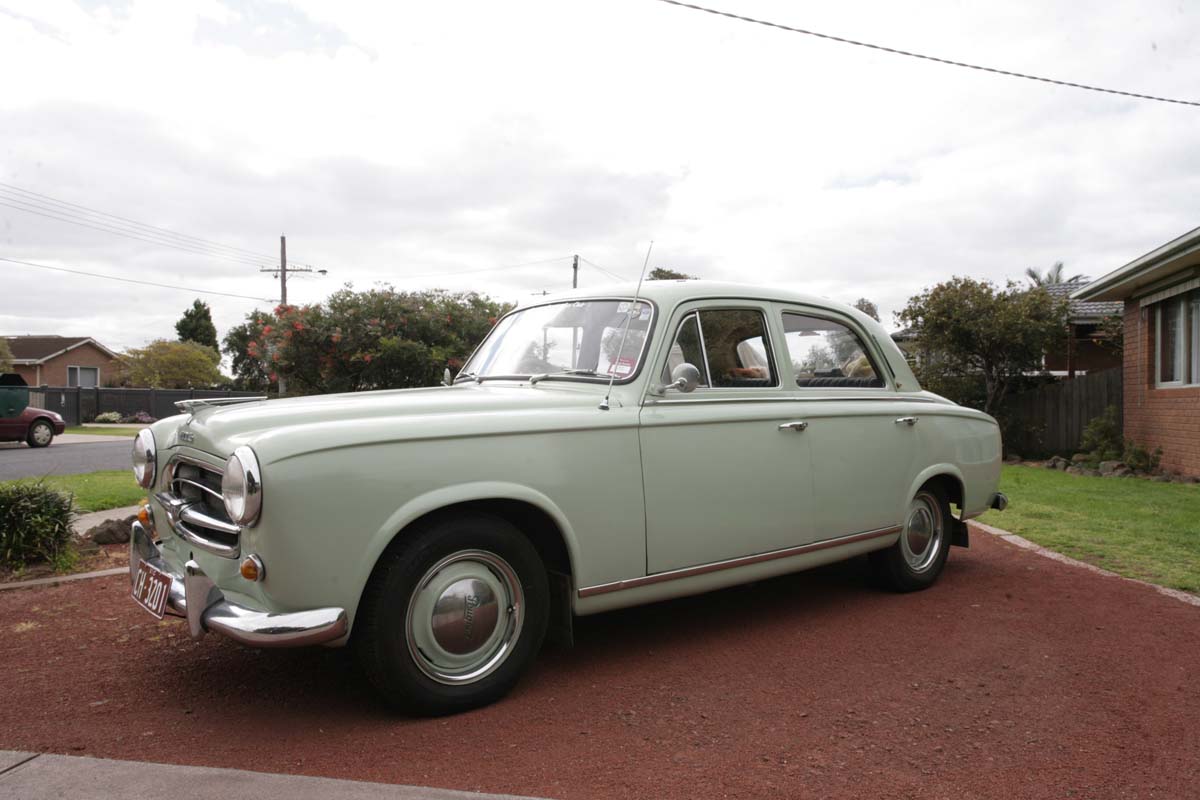 It was on one of the latter, in late 1993, that the engine developed a problem, which led Colin to take the car to Biviano (who had made Colin aware of it when it was for sale), for a rebuild. Biviano had a newer 1.5 engine in stock, which came from a C1960s 403 project with only 50,000 miles on the odometer, compared to the 123,000 miles on Colin’s engine. So, on Biviano’s suggestion, the fresher engine was fitted and the original retained for spares.

Since then, the 403 has really stretched its legs, including an around-Tasmania trip with the Western District Historic Vehicle Club in 1997 and a club run up to Batemans Bay a few years later, with around 14,000 miles travelled since the engine replacement. 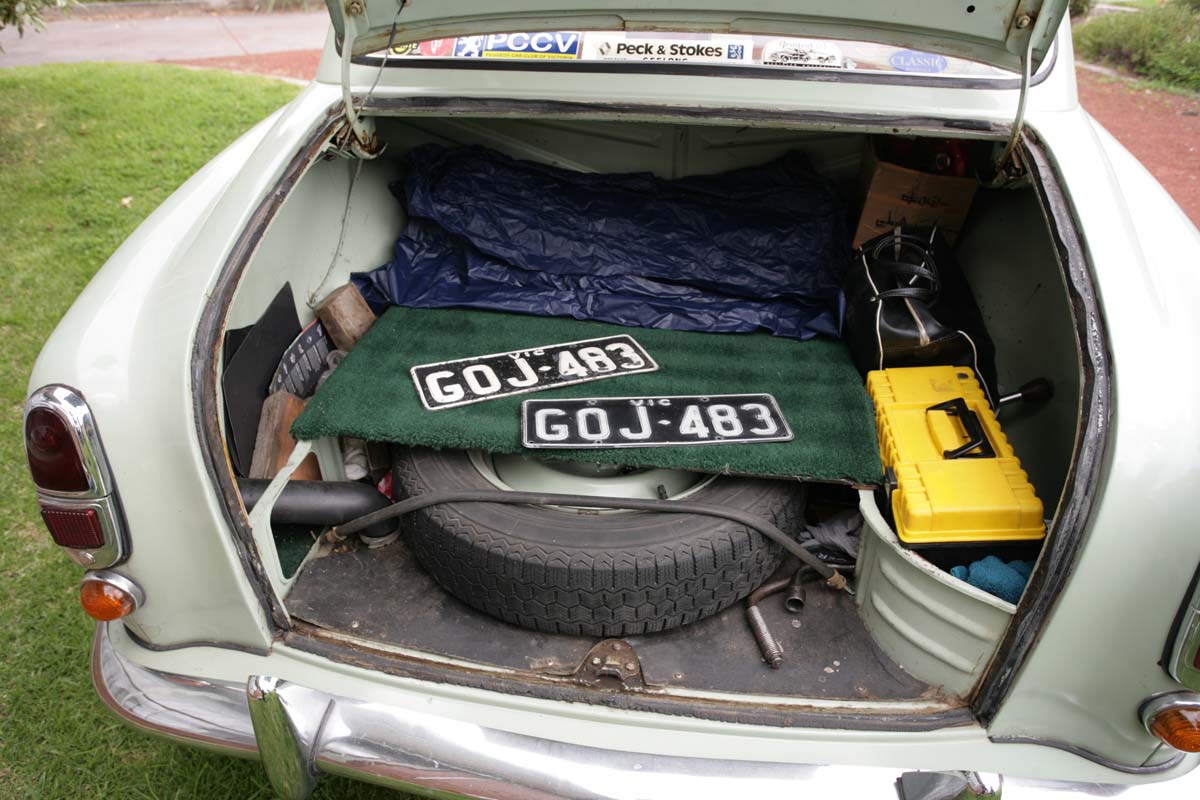 Colin chuckles again recalling the Tasmania trip, where snowy road conditions in the state’s east saw other cars in the group slipping and sliding, with kangaroos bouncing across the road compounding the danger, but the Peugeot remained sure-footed.

While other cars – and other Peugeots – have come and gone from Colin’s collection, the 403 has remained for more than three decades. He’s only selling it due to difficulties with driving a manual car. 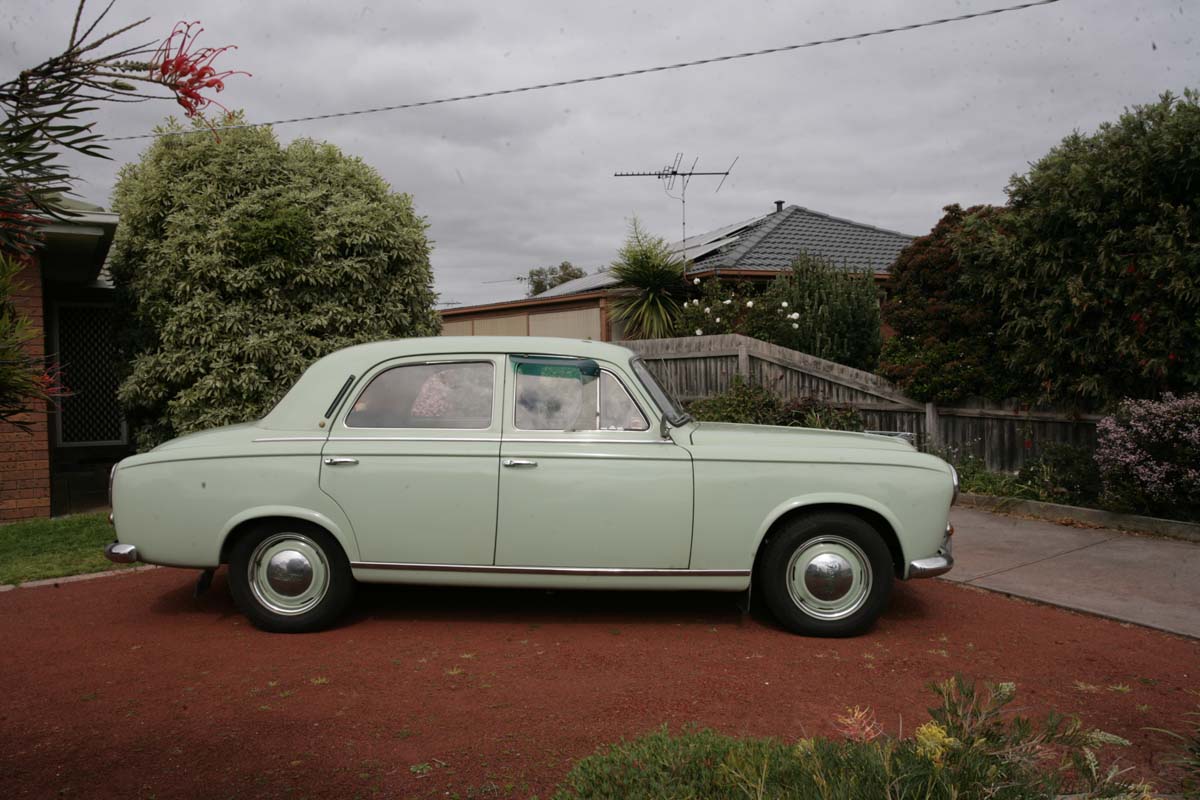 When asked what he loves about his 403, Colin immediately identifies its superb roadholding. Also, despite its age and four-cylinder engine, Colin says it can keep up with modern traffic. The 1.5 four in the 403 is easily capable of cruising at 100km/h on the highways, which the overdrive makes even easier. Colin adds that the car is quite economical, too.

Colin also points to the roominess of the interior. It may be cramped by some standards, but Colin’s come from Simca, Austin and smaller Peugeots, so it’s all relative!

Goodbye 403, but not Peugeot

While Colin is reluctantly letting go of this 403, he doesn’t plan on farewelling Peugeots entirely. Funds from the sale will be put into a newer Peugeot, ideally a 406 automatic.

Having owned so many Peugeots, Colin knows what he’d be in for with a 406 and is looking forward to it.

Hopefully, Colin finds that ideal 406 auto and enjoys more years of Peugeot motoring in the future. 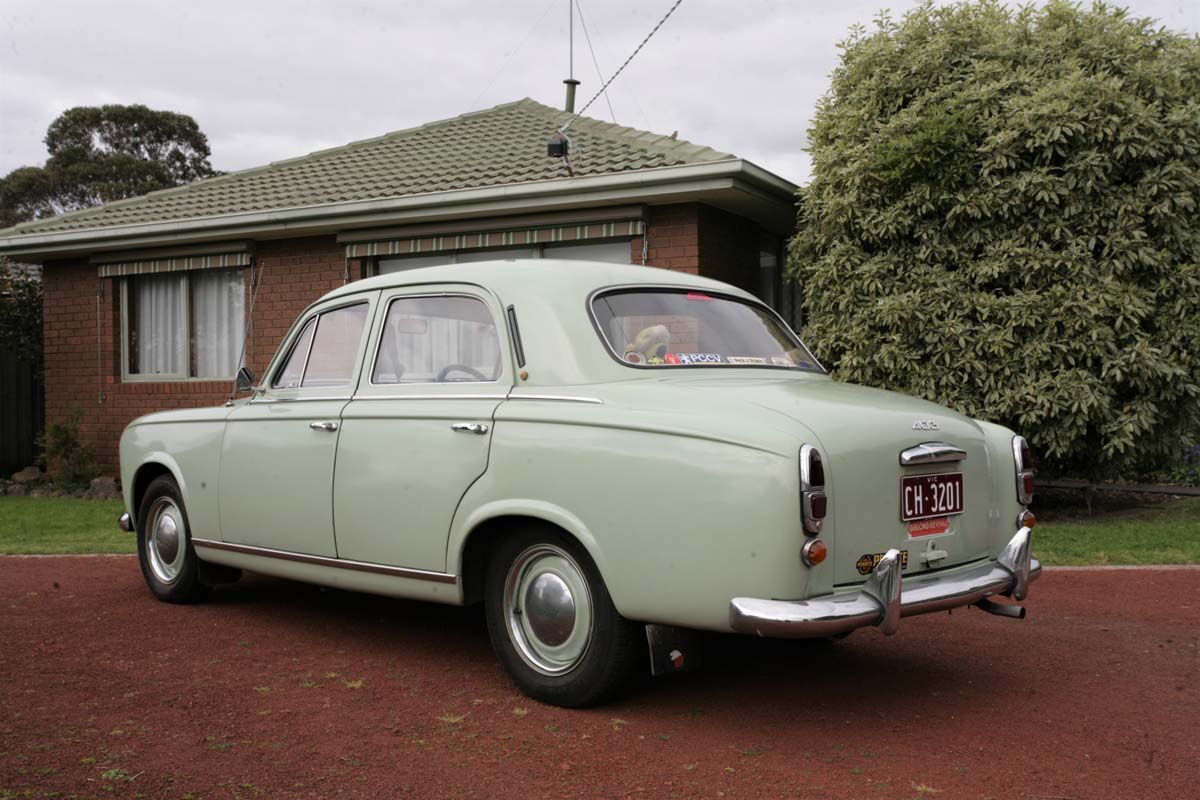 While this 1956 Peugeot 403 is believed to be the oldest surviving example in Victoria, it’s also regarded as the best.

The ’80s resto has held up well, with subsequent maintenance keeping it in good running condition, including a new clutch, gearbox top end and brakes.

New owners will need to acquaint themselves with Peugeot quirks, like the fuel pump that needs priming when cold, but in most other respects, the 403 is no different mechanically from other late-1950s classics.

The car’s original four-cylinder engine and some related spares are included in the sale, along with its original Victorian registration plates – GOJ-483. Asking price has recently been reduced, too.