A Teutonic Classic with an American touch, this Mercedes has a long Australian history.

The late 1950s and early 1960s were interesting times for Mercedes-Benz, not only generally, but also in Australia, leading to a major growth in the German brand’s presence here, including a short-lived local assembly operation. 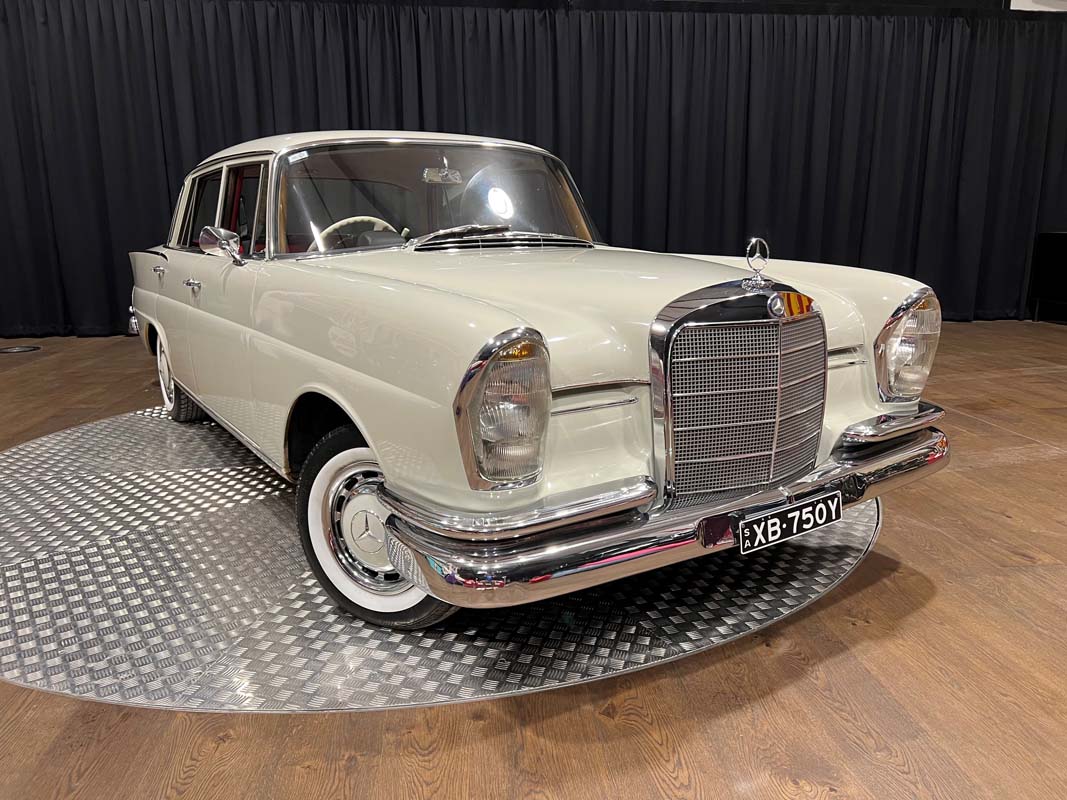 It could be argued that the modernisation of Mercedes-Benz’s passenger car range started with the W111 series, which had been introduced in 1959 to replace the previous W180/ W128 ‘Ponton’ series. While aiming to improve on what had come before, Mercedes-Benz also sought to economise with the new W111 series.

At the time, Mercedes’s 180, 190, 220 and 300 models had a variety of wheelbases, adding to costs and production line complexity. The W111 series aimed to address this, with one basic platform for all, but differing wheelbases, depending on whether a six-cylinder of four-cylinder engine was fitted. Although the W111 series was of a monocoque design, a separate subframe for the engine, transmission and front suspension meant differing wheelbases were easy to accomplish. 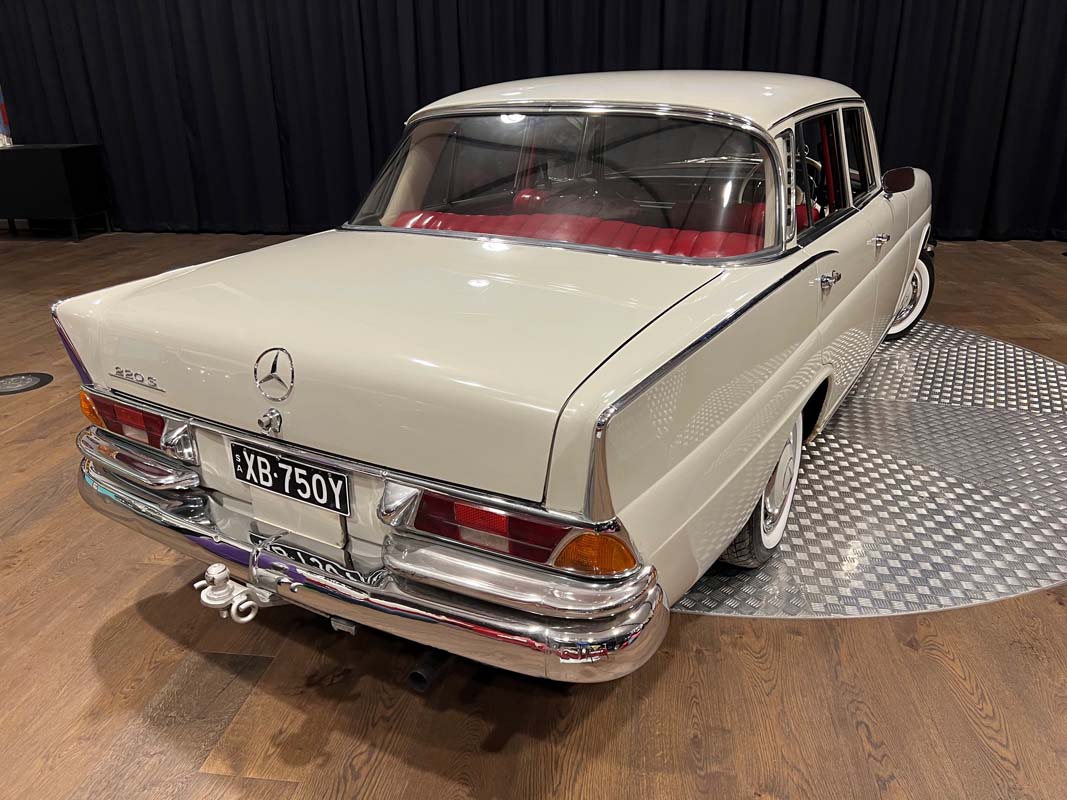 This approach, although it undoubtedly improved profitability and enabled better quality control, meant that sedans, coupes and convertibles on this platform all tended to look similar. Four-cylinder models (carrying a separate W110 subseries code) were less efficient, having to pull a body of the same size and weight as the the six-cylinder cars, while those six-cylinder cars offered no more passenger room or luggage space than their four-cylinder equivalent.

Coupes and convertible versions of the W111 arrived in 1961, along with a more luxurious W112 subseries. A long wheelbase variant of that subseries followed, essentially undoing much of what Mercedes had tried to achieve with the W111 series in the first place.

Ultimately, Mercedes switched to two distinct bodies for their sedans and large coupes, introducing the W114 and W115 series in 1967, but not before the W111 was replaced with the similar, but larger engined and restyled W108/W109 in 1965.

Most casual observers of Mercedes sedans in the early 1960s wouldn’t have noticed the commonality of the underlying structure and wheelbase, as most attention focused on the styling.

A definite step up from the rounded ‘Ponton’ body of the previous W180 generation, the W111 models looked wider, lower and sleeker, while the addition of tail fins earned these cars the nickname ‘Fintail’ (‘Heckflosse’ in German).

Flowing from the rear doors to peaks at the tail and capped with chrome trimming, Mercedes claimed these fins aided stability at speed, but they were clearly more of an aesthetic feature than an aerodynamic one, and even more clearly inspired by what was coming out of Detroit at the time.

While the Mercedes fins were a long way removed from the worst styling excesses seen on American-made cars, they nonetheless gave the car a distinctive look. Interestingly, they were only applied to the 220, 220S and 220SE sedans on the W111 platform, which are sometimes referred to as 220b, 220Sb and 220SEb to distinguish themselves from the same model names used on the previous W180 series.

When the W111 220SE coupe and convertible were introduced - two years after the sedans - they had only subtle humps over the rear quarters, with no chrome embellishment, either.

Initially, the whole 220 range was powered by the same engine, a 2.2-litre inline six-cylinder, matched to either a four-speed manual with full synchromesh, or a four-speed automatic. Induction changes determined the model name, with the 220 using a single carburettor, the 220S dual carbs and the 220SE fuel injection

This running gear was mostly carryover from the previous W180 generation, including the auto, which was a known weak point, but would be replaced in 1962 with an all-new and much better four-speed.

In its six years on the market, almost 300,000 W111 sedans were built, more than half of which were the twin-carb 220S version like the car featured.

As mentioned earlier, Mercedes-Benz was growing its presence in Australia in the late 1950s. Despite some residual resentment against anything German after World War II, the demand for Mercedes cars and trucks was strong enough that it led to the foundation of Mercedes-Benz Australia Pty. Ltd. (MBAU) in 1958 to increase local distribution, with an eye on local assembly, too.

Jointly owned by Daimler-Benz AG and Standard Motor Products Ltd., MBAU aimed to assemble Mercedes-Benz cars and trucks in Australia to avoid the heavy import duties applied to foreign-made cars at the time. In the case of a European marque like Mercedes, that duty was a hefty 65 per cent. 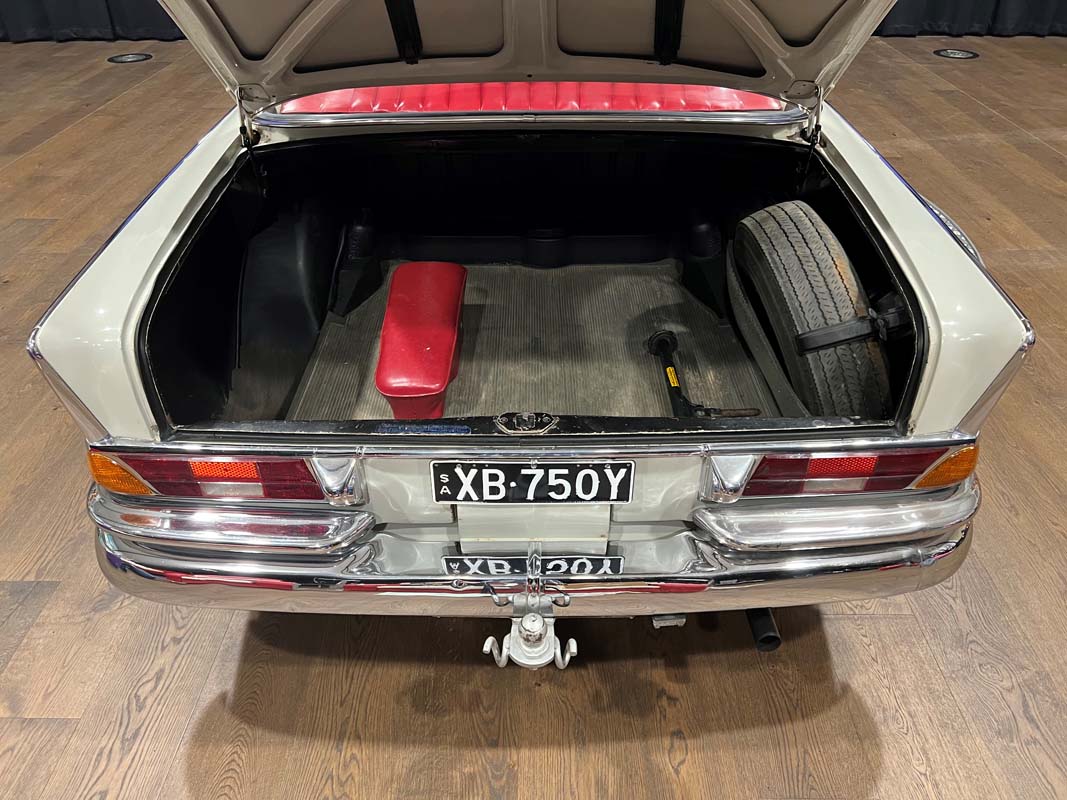 Daimler-Benz AG would provide the parts and technical personnel, while Standard Motor Products Ltd. would provide their extensive Port Melbourne facilities that were used for assembling Standard and Triumph cars.

The new “international” focus resulting from the MBAU deal led to Standard Motor Products Ltd. being renamed ‘Australian Motor Industries’ (AMI) in 1959. While Mercedes was the first non-British car to be assembled by AMI, many more would follow, including Toyota, Fiat and Rambler/American Motors.

The first Mercedes off the AMI line was a 220S sedan, completed in March, 1959. This was no mere bolting together of parts, though, with some welding, fitting the drivetrains and all the painting done at Port Melbourne, while tyres, batteries, leather upholstery for the seats and other interior trim parts were all sourced locally. 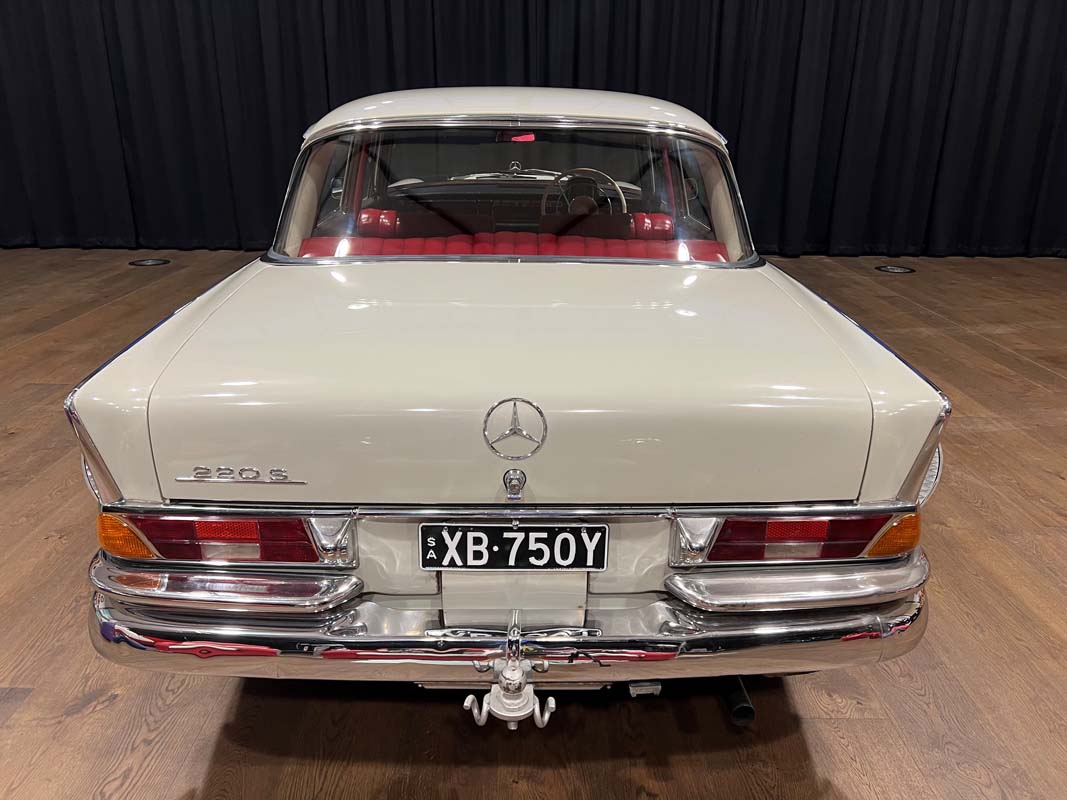 In its first full financial year (ending in June, 1960), MBAU had assembled 729 Mercedes cars and 153 trucks. Admittedly, this was a drop in the ocean compared to what Holden and Ford were producing at the time, but it was significant for a premium foreign marque.

Output more than doubled the following year, but then the 1961 “credit squeeze” saw demand tail off when consumers couldn’t get credit for big-ticket items like new cars. At MBAU, car assembly fell by almost 25 per cent, but the truck side was hit even harder, down more than 75 per cent.

Although local assembly ended in 1965 (due to greater local content requirements for import duty concessions), Mercedes managed to improve their position in the Australian market through the remainder of the decade, with sales of passenger cars exceeding 2,000 units for the first time in 1969, then improving again in 1970, even though the local operation was now a full importer. 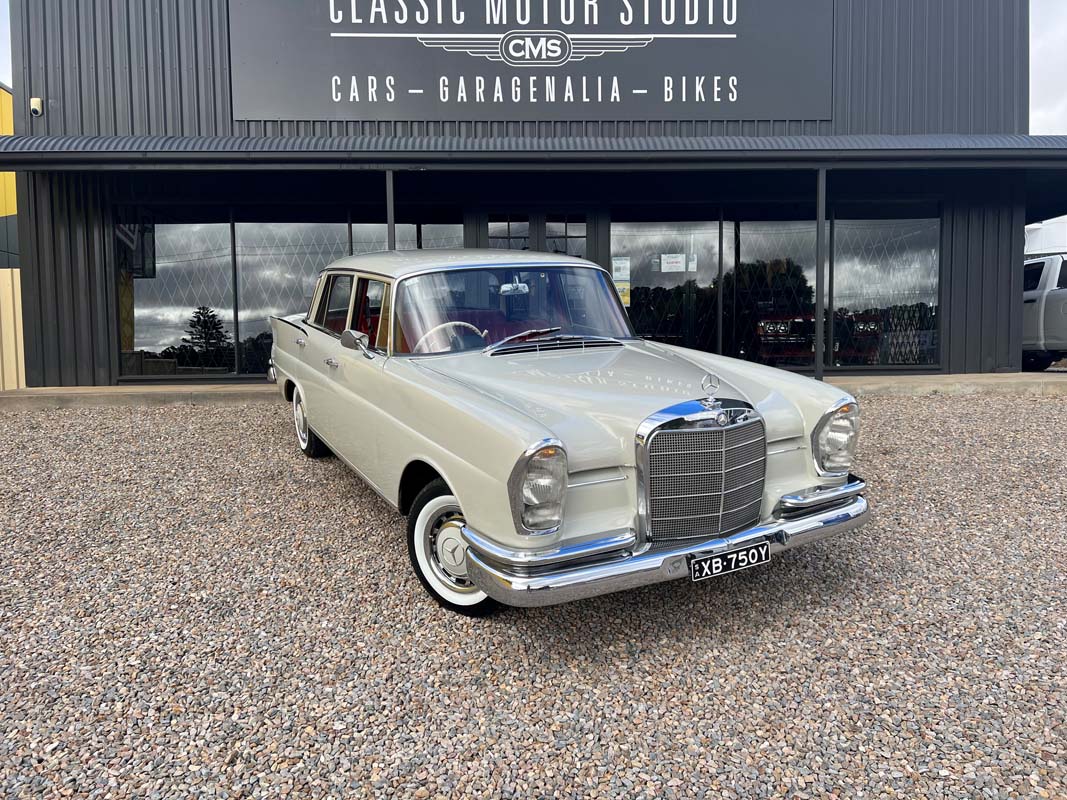 Being a 1963 model, the Mercedes-Benz 220S sedan featured got the best of what was available during the W111’s production run, like the vastly improved automatic transmission and front disc brakes.

Whether this car was an AMI-assembled example is unknown, but it’s certainly possible, as the model year slots into the period of local assembly. It also bears an MBAU ID plate and body number that would correlate to local production figures and timing.

Running gear is the stock 2.2-litre inline six and optional four-speed automatic, with independent front and rear suspension, the latter of the swing-axle type.

Australian-assembled 220s were offered in an unadventurous colour palette of black, medium blue or four kinds of grey. This car appears to be finished in the ‘white grey’ option, but again, it’s unknown if this car was assembled and painted locally.

The muted exterior is contrasted with an interior finished in bright red leather and featuring genuine wood trim on the doors and dash.

Classic Motor Studio, who have this car listed for sale (see below), believe both the paint and seat trim to be the originals, along with the chrome and other exterior trim. 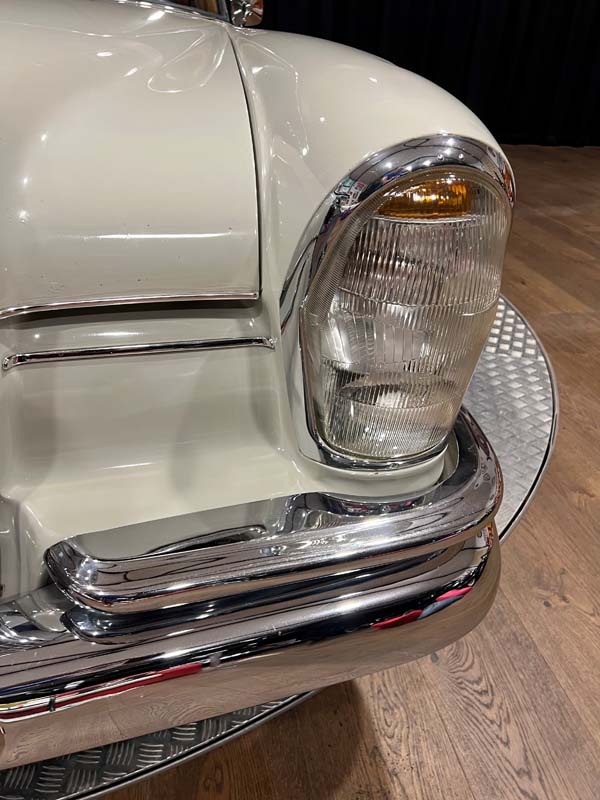 With only three owners from new, this 220S is said to have spent most of its life in Tasmania. Its first owner used it as a daily driver for many years, adding a towbar but keeping the rest of the car original. The second owner was also from the Apple Isle, while the third and current owner is based in South Australia.

Appearing to have been well maintained throughout its life, recent refurbishment work on this classic Mercedes includes updated shock absorbers and new fuel lines. The engine and trans are described as the originals, though, making this a matching-numbers car.

‘Finny’ Mercedes don’t come on the market often, and good quality examples like this one are even rarer. If the 85,720 miles on the odometer is accurate, it makes this car’s condition even more impressive.

Mercedes-Benz has a strong owner’s club here in Australia, with chapters in all states and the ACT, so this car’s new owner will have a network of expertise to call on, should they join the club.

The Victorian club is particularly healthy, attracting big numbers and featuring some stunning cars at their annual club concours in the past – they even have a concours category just for the Finny sedans!

This car could bring some income for its new owner as a hire car for weddings and formals, but even as a club car with a difference, this Mercedes has a lot to recommended it as a classic piece of German engineering. And now, just as it did back then, any car bearing the three-pointed star carries a lot of prestige.

Thanks to Motor Book World for research material used in this article.

Believed to be original and unrestored, this car presents extremely well and was a running, driving and registered car before being consigned with Classic Motor Studio, so no repair or refurbishment work would be required by the new owner.

On full South Australian registration (sold unregistered to interstate buyers), the car comes with some documentation, including the original owner’s manual and a promotional brochure.