After eight years of looking and six years of negotiations, this classic Cadillac hearse was meant to be. 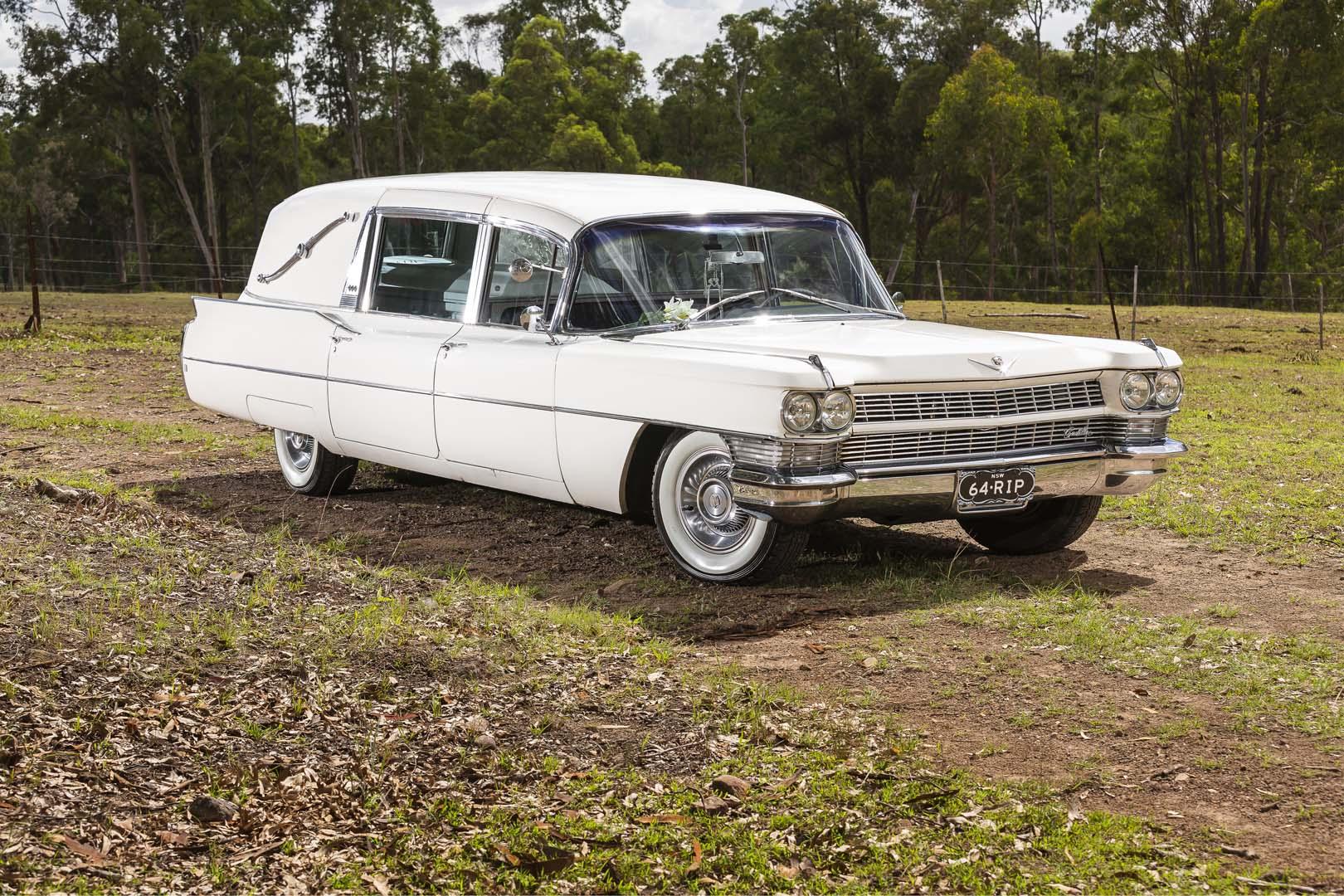 The vehicle collection of James and Justine Talevski may be small, but it’s incredibly diverse. The couple owned a 1964 Wolseley 24/80 MkII in the past and currently have a 1975 International D 1610 truck and a ’77 VW Beetle.

When you understand James and Justine are based in Clarence Town, a rural township north of Newcastle, the pair of vintage tractors in the collection makes sense. The addition of a 1964 Cadillac hearse needs some explaining, though!

“James has always wanted a hearse!” Justine laughed.  “He had been looking for one for eight years.”

Justine was a little frosty on the idea at first, but James was persistent. He needed to be, because it took six years before Justine finally caved in and said yes to buying one in early 2018.

“It was actually me who found this hearse – for sale online,” Justine explained. “I looked at the pictures and said to James, ‘If you have to have a hearse, this should be it’.”

Located in Victoria, the hearse looked complete and appeared to be in good condition. An initial phone call confirmed the hearse was still for sale and the seller provided James and Justine with detailed pictures that confirmed the condition. That was enough to get Justine’s nod and seal the deal. Understandably, James was rapt!

“Within a week, we had organised flights from Newcastle to Melbourne - before Justine knew it, we were on a plane to buy this beautiful hearse,” James recalled. 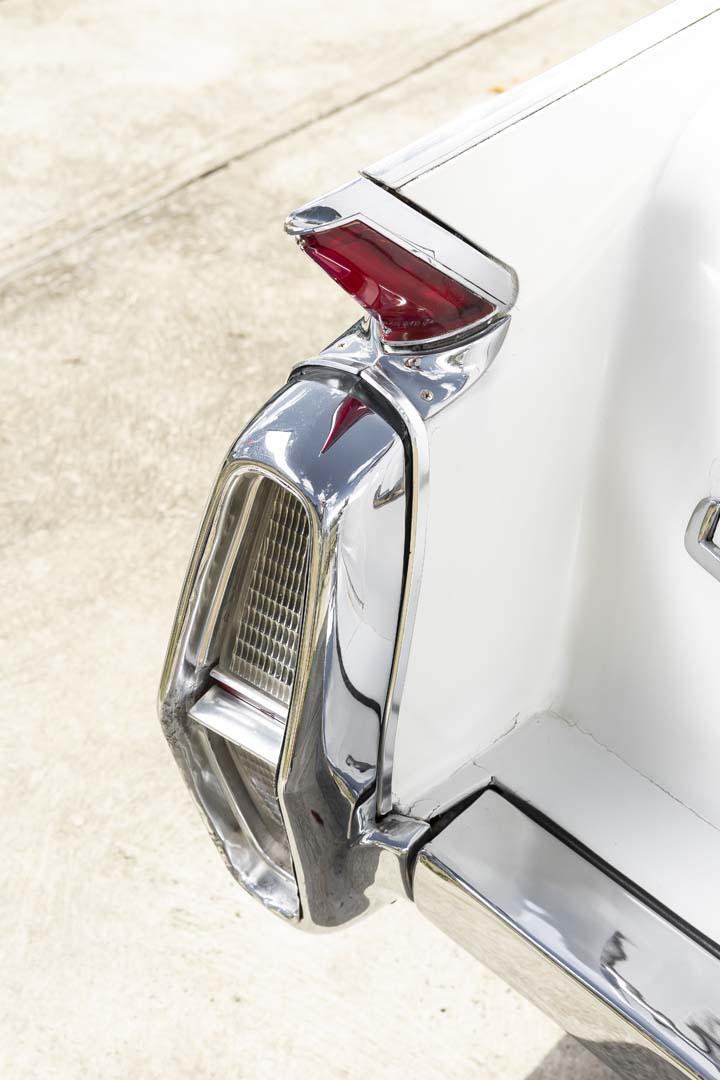 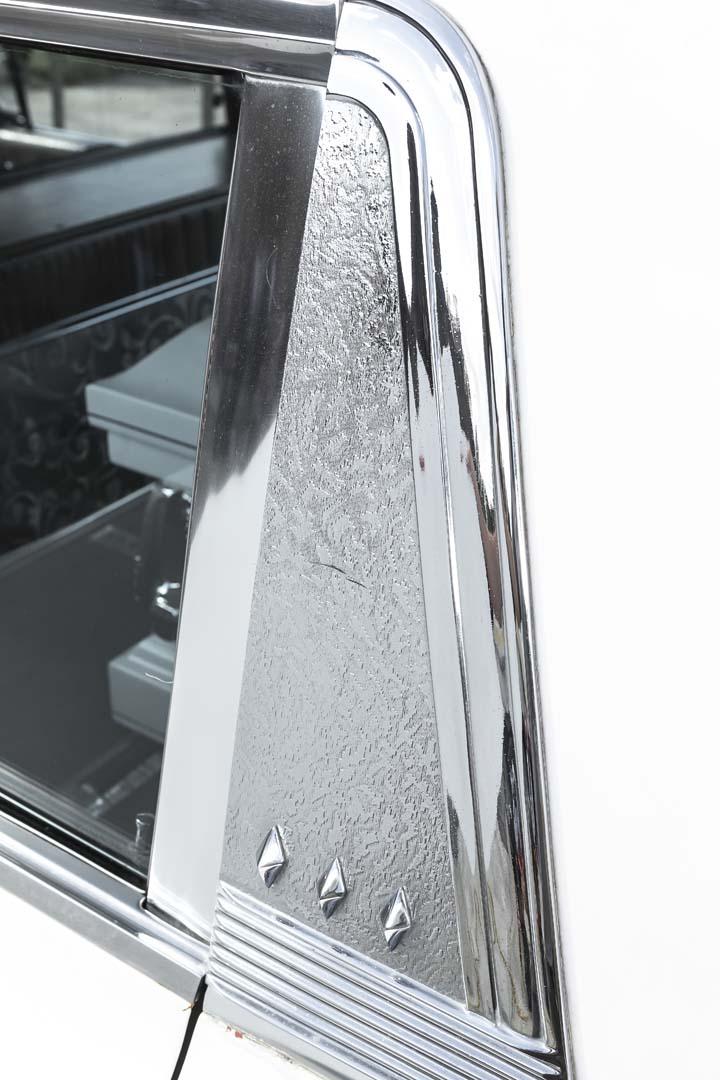 One of the oldest coachbuilding firms in the US, Superior had evolved with both the automotive and funeral industries. It had managed to survive the arrival and departure of several competitors, too.

By 1964, Superior was one of only four major coachbuilding firms producing hearses and ambulances on Cadillac chassis. The others were Hess & Eisenhardt (which produced some vehicles under the S&S name), Miller-Meteor and Eureka.

There were a handful of other coachbuilding firms, like Cotner-Bevington, National, Siebert and Flxible, but these firms tended to use chassis from other manufacturers.

Superior’s Cadillac-based range for 1964 was split across four series - the ‘Royale,’ ‘Sovereign,’ ‘Crown Royale’ and ‘Crown Sovereign’ - all of which were available in hearse or ambulance form. The two main series, Royale and Sovereign, were mainly defined by the upper body styling and side window treatment, while the Crown variants added an over-the-roof chrome bar (in the style of the Ford Crown Victoria sedans from a decade earlier) and a more lavish treatment to the interior.

Superior also produced a small number of ‘flower cars’ based on the Cadillac commercial chassis in ’64. With their single cabin and long rear storage space, these look like utes at first glance, but were made specifically to carry wreaths at large funerals.

These flower cars were part of a total production of 1,223 vehicles built by Superior on Cadillac chassis in ’64 – the most of any coachbuilder using Cadillac chassis that year and one of the best years in the company’s history. 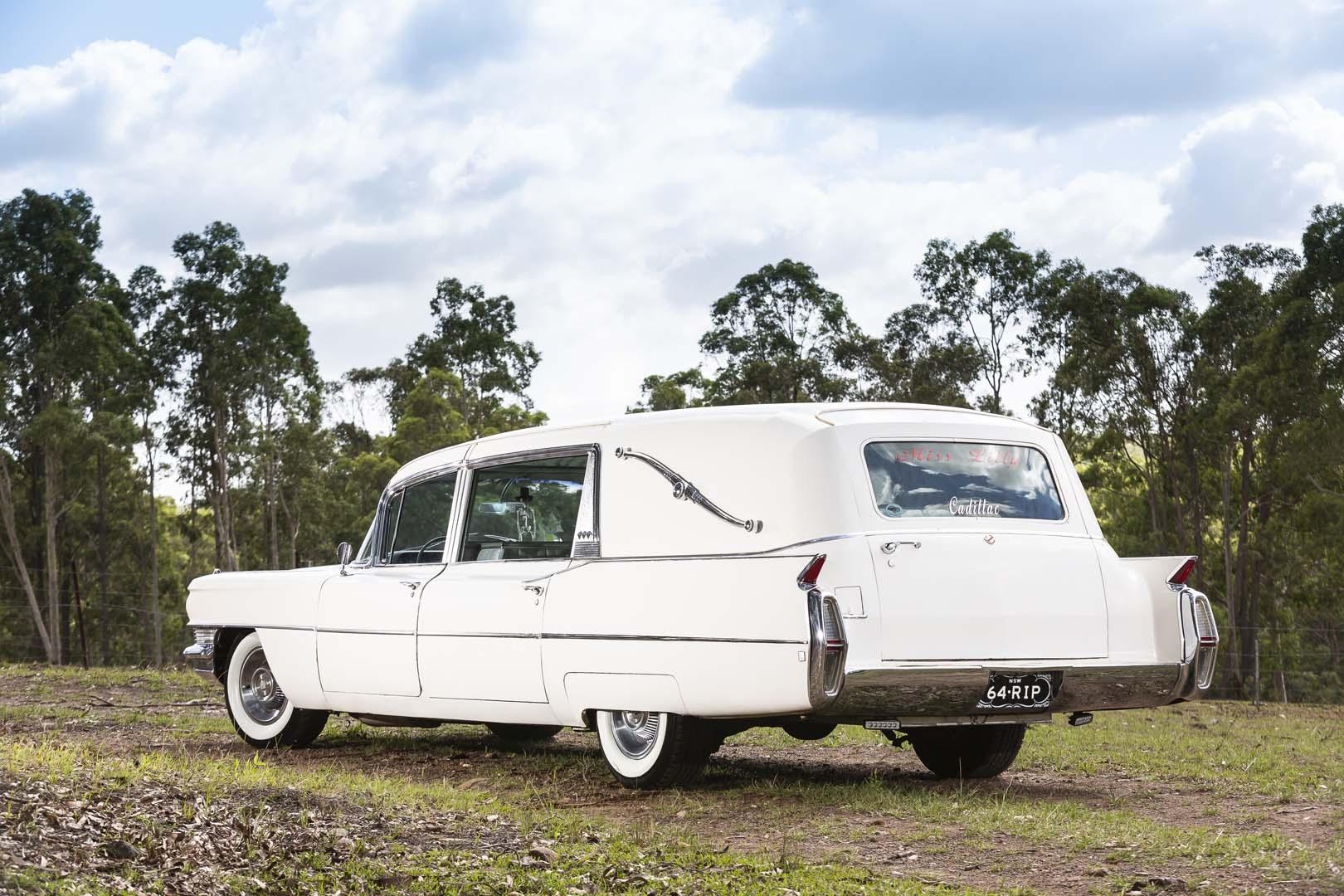 The Ohio-based firm also manufactured a line of ambulances and hearses based on Pontiac chassis. Naturally, these were far cheaper than the equivalent Cadillac, but were less opulent, too.

Hearse body aside, the ’64 Superior that James and Justine had bought was mechanically unchanged from a Series 75 Cadillac of that year. That meant a 429 cubic-inch (7.0-litre) V8 producing 340hp (253kW) and 480lb/ft (651Nm), matched to a three-speed Turbo 400 automatic transmission and Cadillac diff, although the tailshaft was usually longer than the equivalent 9-passenger Series 75 sedan and limousine that Cadillac built in-house in small numbers.

Suspension for the Commercial Chassis was made up of the same independent coil springs at the front as the passenger cars, but with leaf springs and live axle at the rear.

While the casket area was opulently trimmed, such luxuries rarely extended to the cabin. Dedicated hearse bodies generally carried a simple bench seat and basic instrumentation, with features like air conditioning and power windows being optional. Ambulances and combination cars (vehicles that could serve as both ambulance and hearse) did tend to be fitted with a radio – or provision for a radio – to allow two-way communication equipment to be added.

A look into the interior of the Talevski Cadillac hearse shows just how spartan these vehicles were for the driver, but it’s understandable, really – the focus was on the rear, not the front.

There is abundant space, though, and Justine jokingly says there’s room for four – three on the front seat and one laying down in the back! 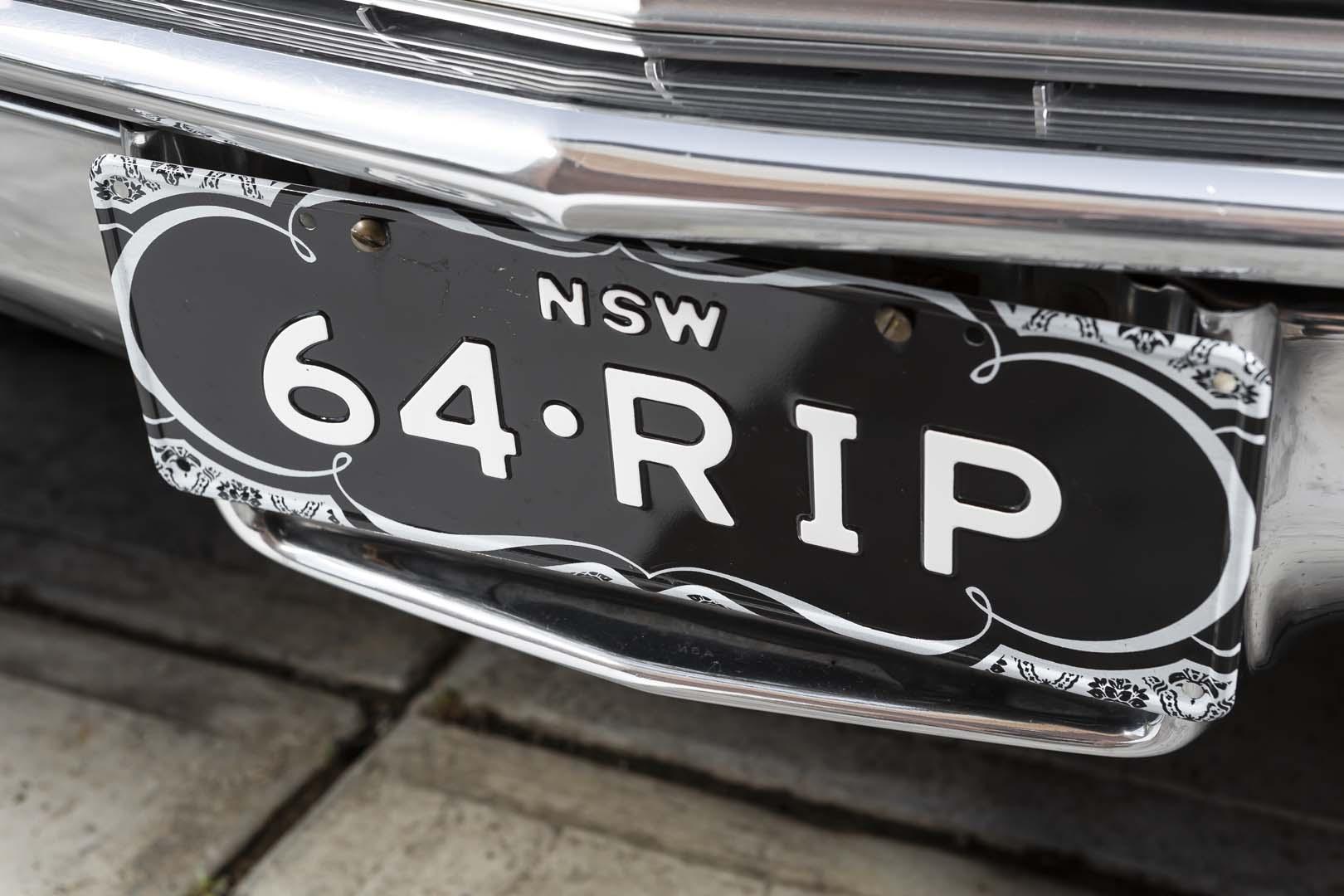 When they purchased the hearse, James and Justine were given a large quantity of information that enabled them to track almost its entire history.

When new, the Superior Royale Landaulet rear-loader was delivered to Palm Mortuary in Las Vegas. Given the name of ‘Miss Lilly’ by the Palm staff due to its white paint, the hearse remained in use in Nevada for more than four decades before it was consigned for sale at a funeral convention auction in 2006.

At that same auction was a hearse with a more significant history in the form of the ’64 Cadillac Miller-Meteor that carried John F. Kennedy’s body from Parkland Hospital in Dallas to Love Field for the flight back to Washington D.C. following his assassination.

The ‘JFK hearse’ has done the rounds at several auctions since, bidding as high as US$900,000 at one auction but failing to meet its reserve. A more realistic US$176,000 was achieved at a Barrett-Jackson auction in 2012.

In something of a ‘Superior connection’, the vehicle that received Kennedy’s body at Washington was a ’63 Pontiac ‘Model 207’ ambulance by Superior.

Sold to Ken and Karen Morgan in Western Australia in 2007, Miss Lilly’s arrival in Fremantle caused no small amount of consternation for its new owners, as quarantine officials believed a tiny amount of fluff and soil on the casket rollers could be more extensive under the casket area and insisted the entire section be ripped up for inspection.

Obviously, this was no simple task, but the hearse wouldn’t be released without the quarantine officers being satisfied there was no additional soil or plant matter inside. As such, the Morgans (who also own and operate a ’59 Cadillac hearse) spent four hours removing the flooring and inner side panels. 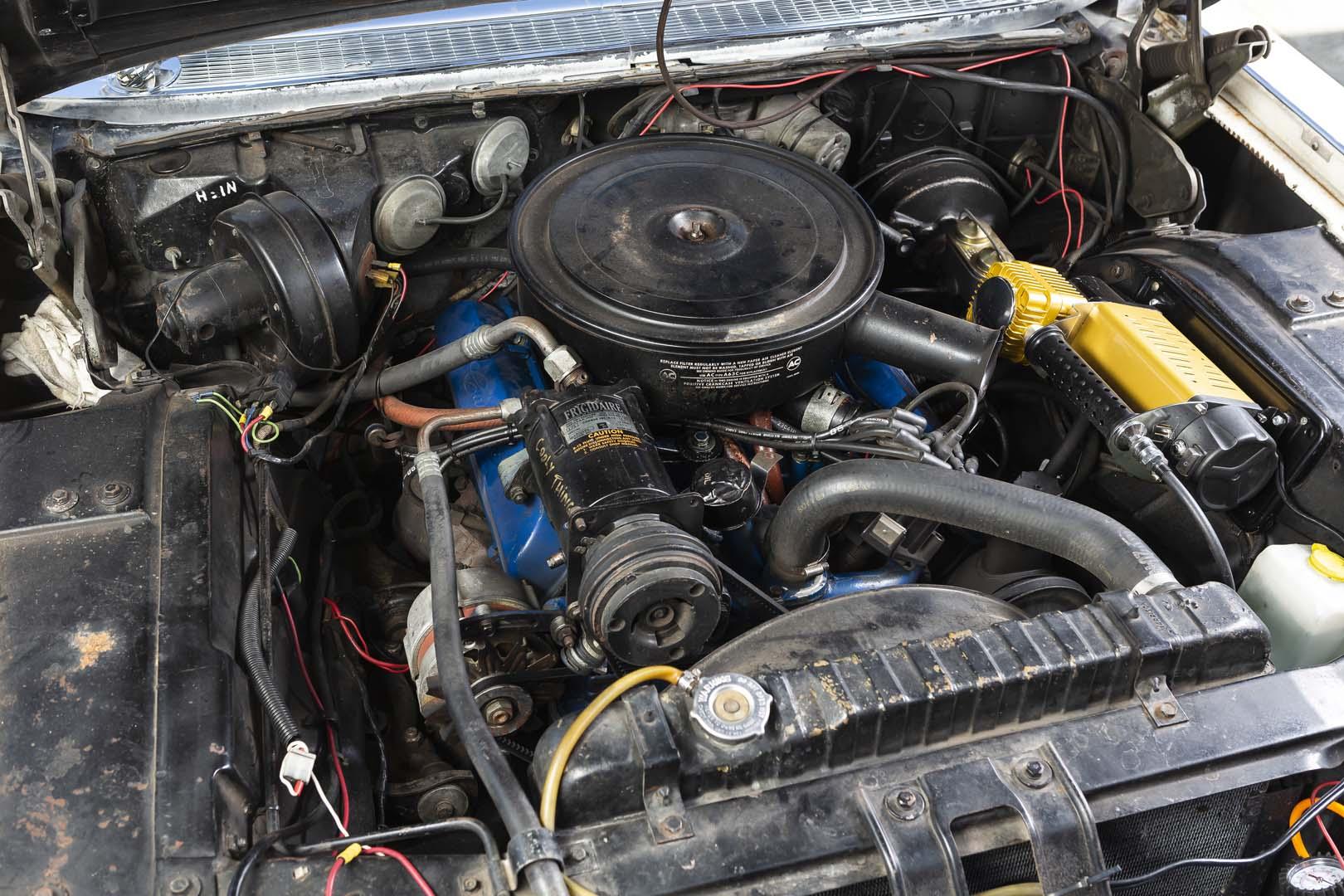 Ultimately, no additional dirt or other material was discovered and the hearse was cleared. The Morgans believe the officials had been spooked by the discovery of dead squirrels (yes, really!) in the previous car they inspected and that made them super cautious with Miss Lilly.

Before it was cleared, the hearse suffered more damage while in port, including a badly-dented rear bumper, chrome damage and stripped paint, leaving the owners with a heavy - and unnecessary – repair bill.

The Morgans spent close to a year getting Miss Lilly ready for the road, including bumper repair and rechroming, rebuilding the carby for the 429 V8, fitting a new fuel tank, refurbishing the transmission, rewiring most of the electrics and a full retrim of the casket area. That left nothing to allocate to the cabin area, which needed some attention, too, but the hearse was nevertheless ready for the road by late 2008.

Driven from Beechboro to Lancelin to attend a motorcycle and hot rod show that September, the Morgans used this as a test run to find any faults before the hearse was registered. Despite poor weather on the three-hour round trip, the hearse performed faultlessly and was duly registered, used and enjoyed in WA for the next six years. 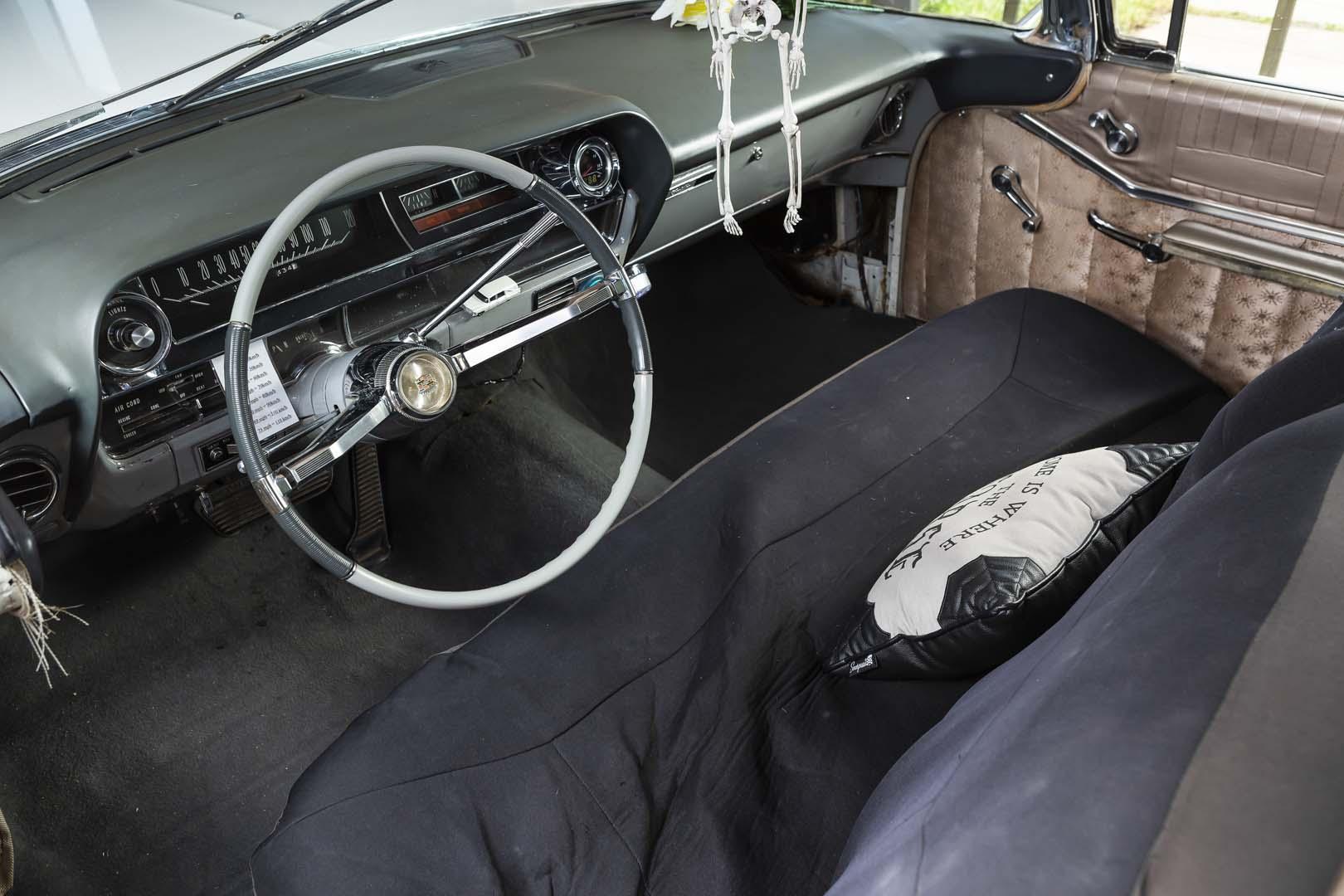 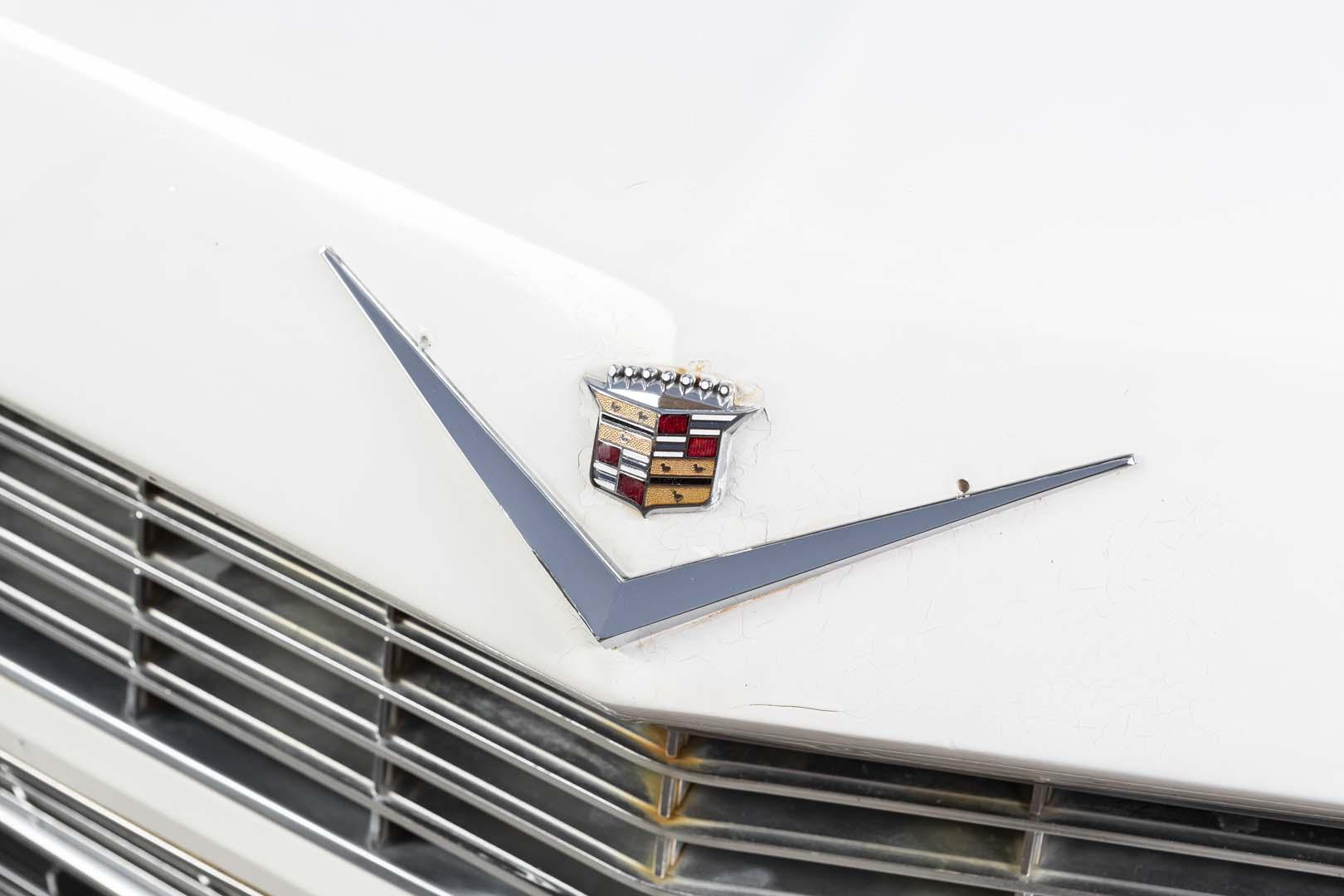 The next chapter in Miss Lilly’s story came when she was sold in 2014 to the enthusiast in Geelong, Victoria, that James and Justine ultimately bought her from.

James said the Victorian owner had used the hearse mainly as a show car, but for a few funerals, too.

The engine was rebuilt during this period and most of the suspension refurbished or replaced, too, as the weight of these vehicles tends to lead to premature suspension wear.

Overall, the hearse has been used sparingly, both here in Australia and in its original life back in the USA. When James and Justine picked it up, only 7,000 miles were on the odometer.

As purchased, the hearse was solid and reliable enough to drive home to NSW, which James and Justine duly did. Since then, Miss Lilly has been treated to new headlight assembles and a new float in the fuel tank, with a coffin added to the back for show. New air con parts are still on the to-do list, but the rough bench set was recently repaired and completely reupholstered, with ‘Miss Lilly’ embroidered into the uprights.

With James a shift worker and Justine studying, the couple have had few opportunities to take Miss Lilly to car shows, but when they do, it certainly draws attention. At the 2018 Stroud Brick Throwing Show (what a name for an event!), this hearse picked up the Judge’s Choice award.

It’s occasionally been sought by local funeral homes for services, too.

“We also have ‘bookings’ from some friends that are alive,” Justine said. “They want to go out in style with Miss Lilly when their time comes.” 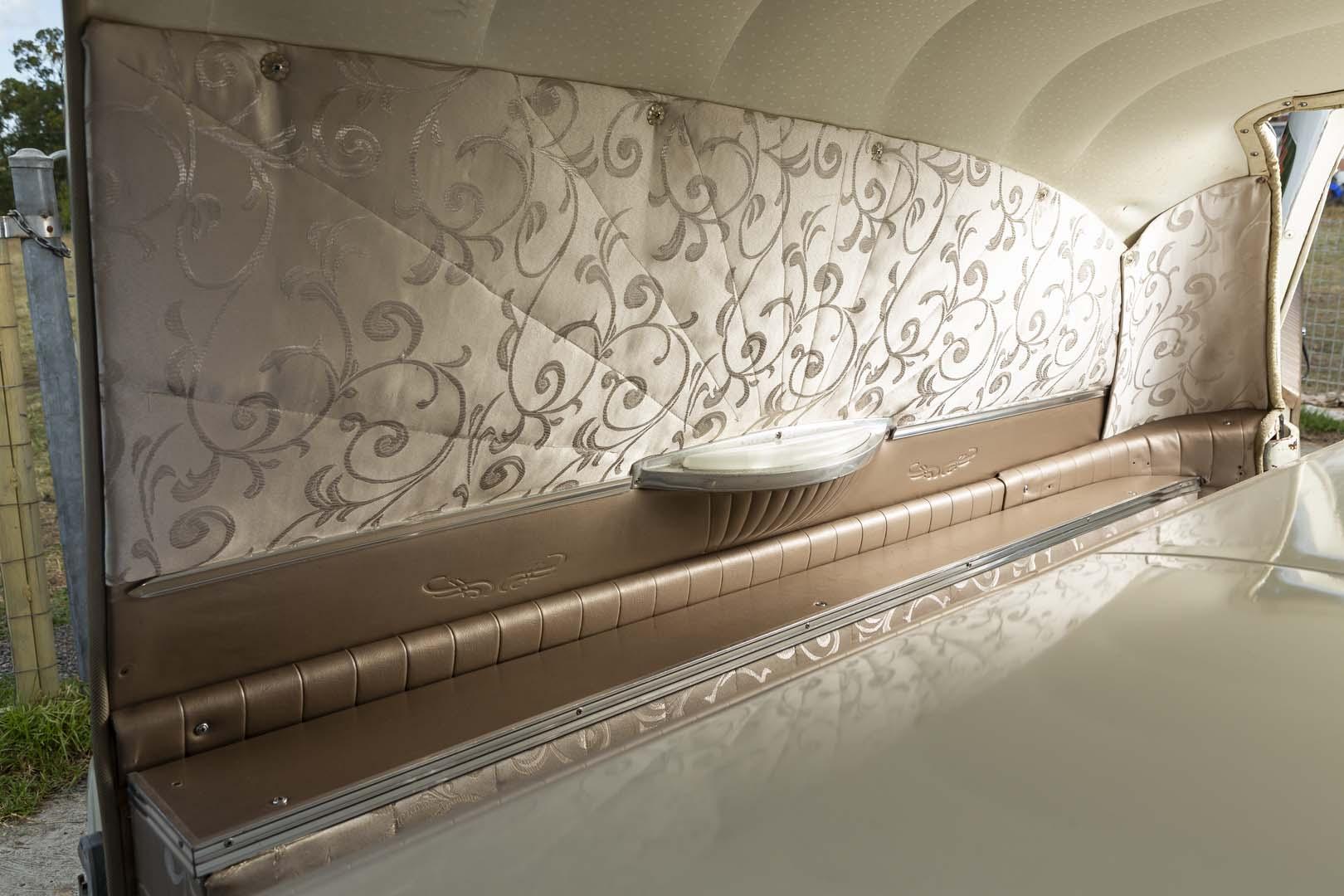 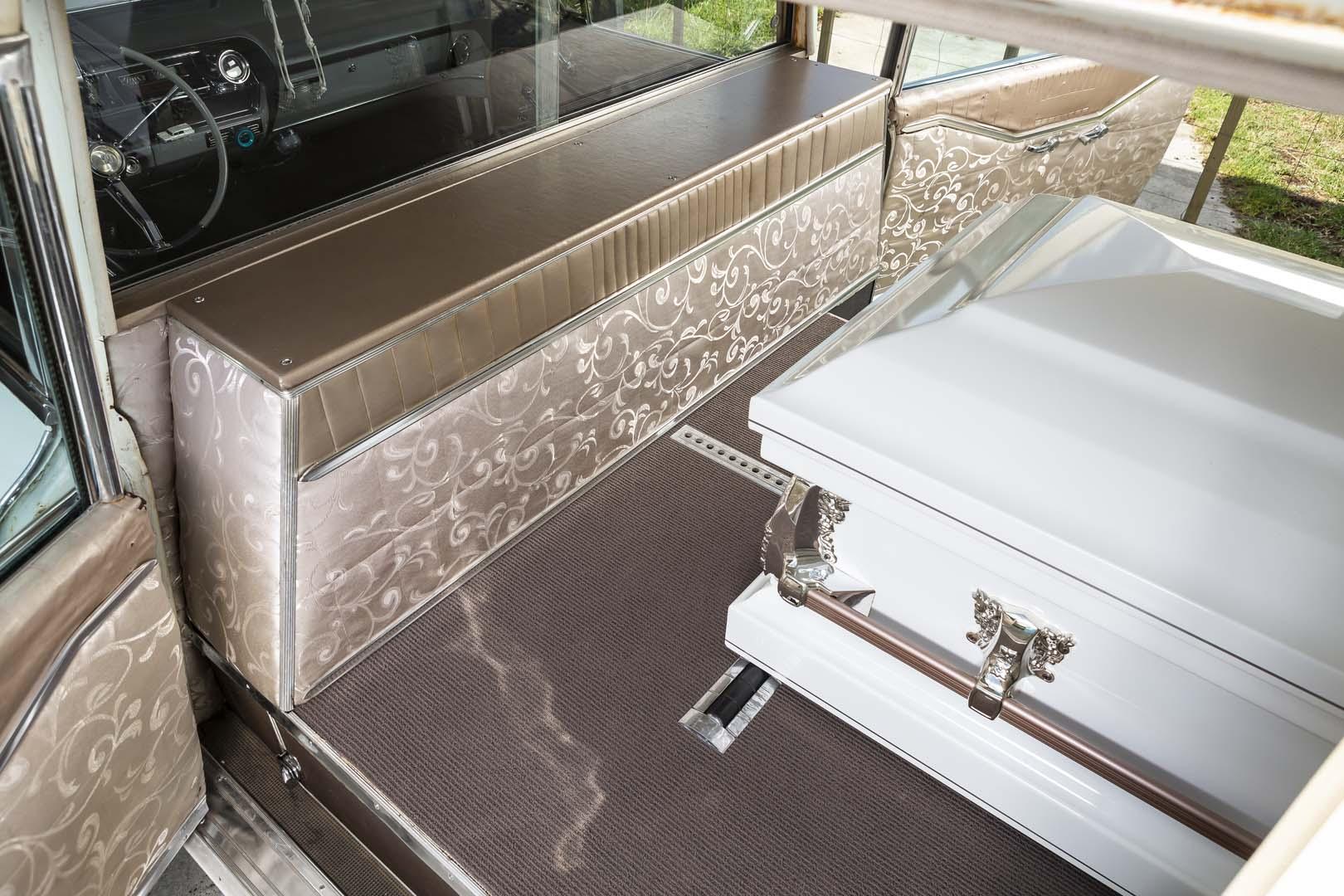 When James was asked if he’d ever sell Miss Lilly, his answer was a resounding ‘no’!

“We love her uniqueness and character. She gets looks wherever she goes and is a great conversation starter.”

After initially failing to be convinced by the merits of a hearse, Justine’s come around, too, and shares the story of their return trip to NSW that proved they’d made a good call in buying this hearse.

“Just after we purchased Miss Lilly and were driving out of Geelong, we stopped for lunch at a highway service station.”
At 6.4 metres long and 2.3 metres wide, the hearse is far too big for a conventional car parking space, so they had to park in the truck parking area.

“When we were walking back towards the truck parking, there was a little shop selling fruit, vegetables and fresh flowers. The shop had a big sign up out the front, and what did it say? Fresh white lilies!

“We thought that was a sign we had definitely made the right decision in purchasing Miss Lilly!” 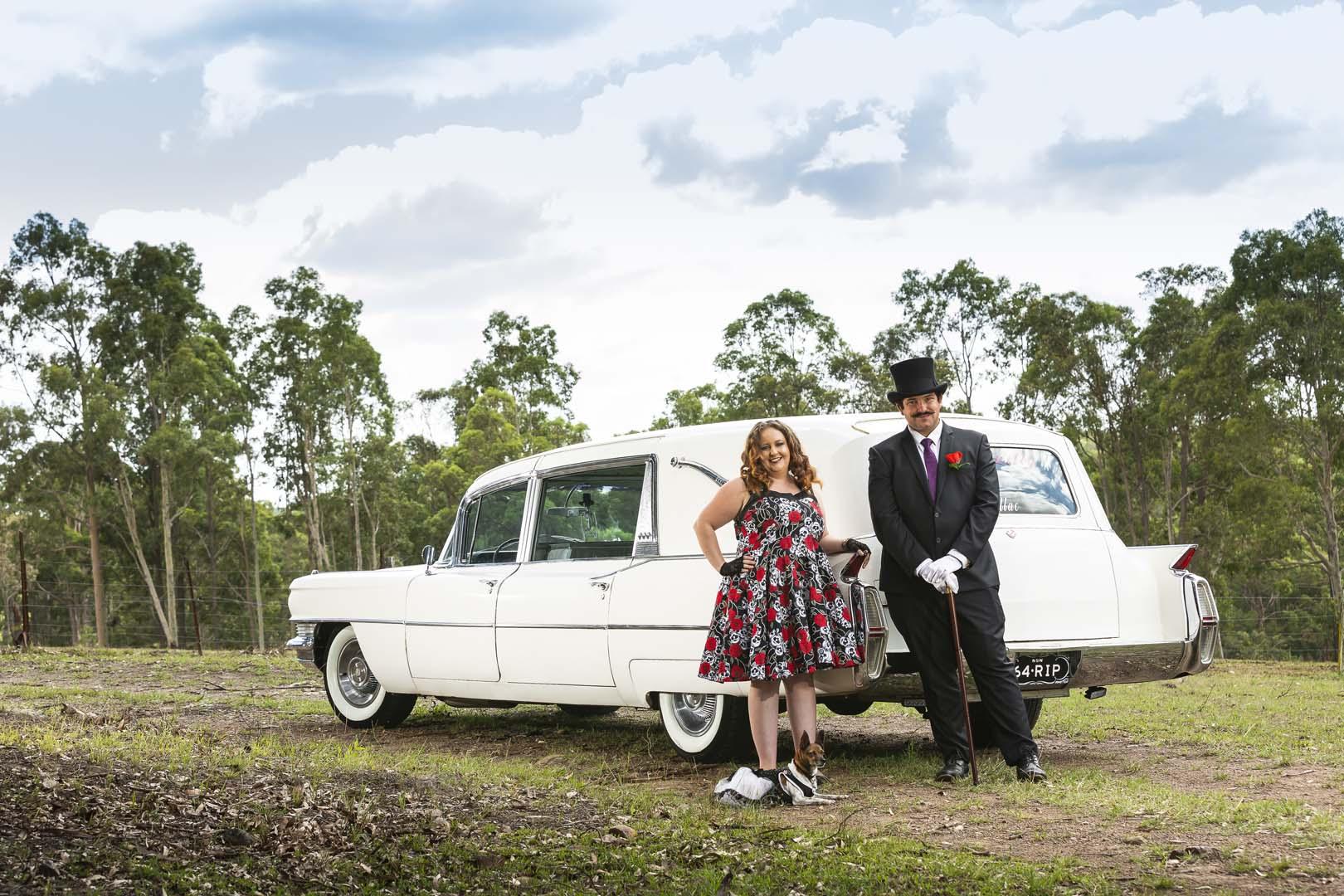 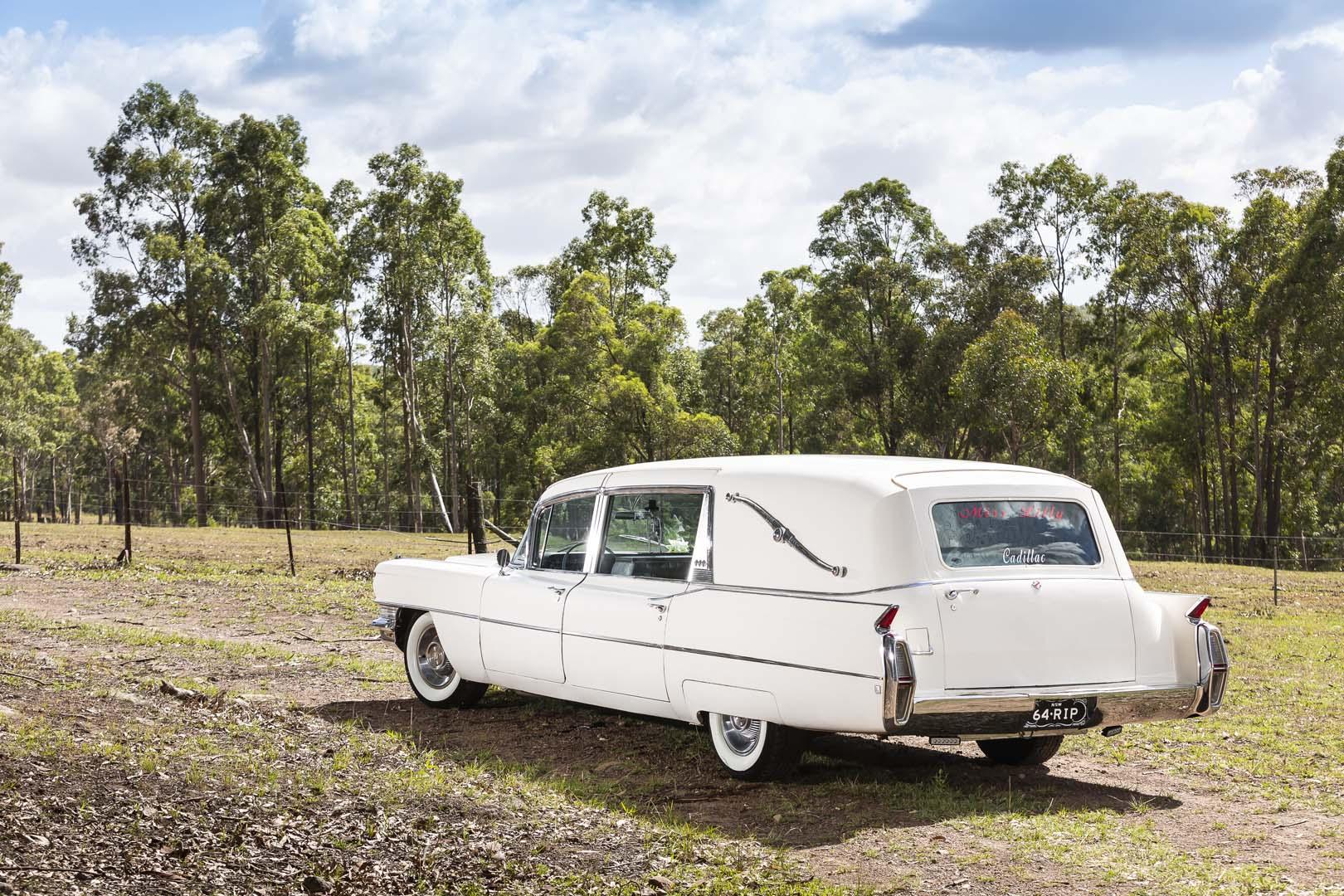