Under the bonnet of this Dodge Coronet lies a connection to a drag racing legend.

The Dodge Coronet and Dick Landy are names that wouldn’t be familiar to a lot of Aussie car aficionados, even amongst the Mopar crowd. On the other side of the Pacific, recognition for both the Coronet and Landy is far greater.

So, how did the car featured here come to be in Australia and what’s its connection to Dick Landy? Read on and find out! 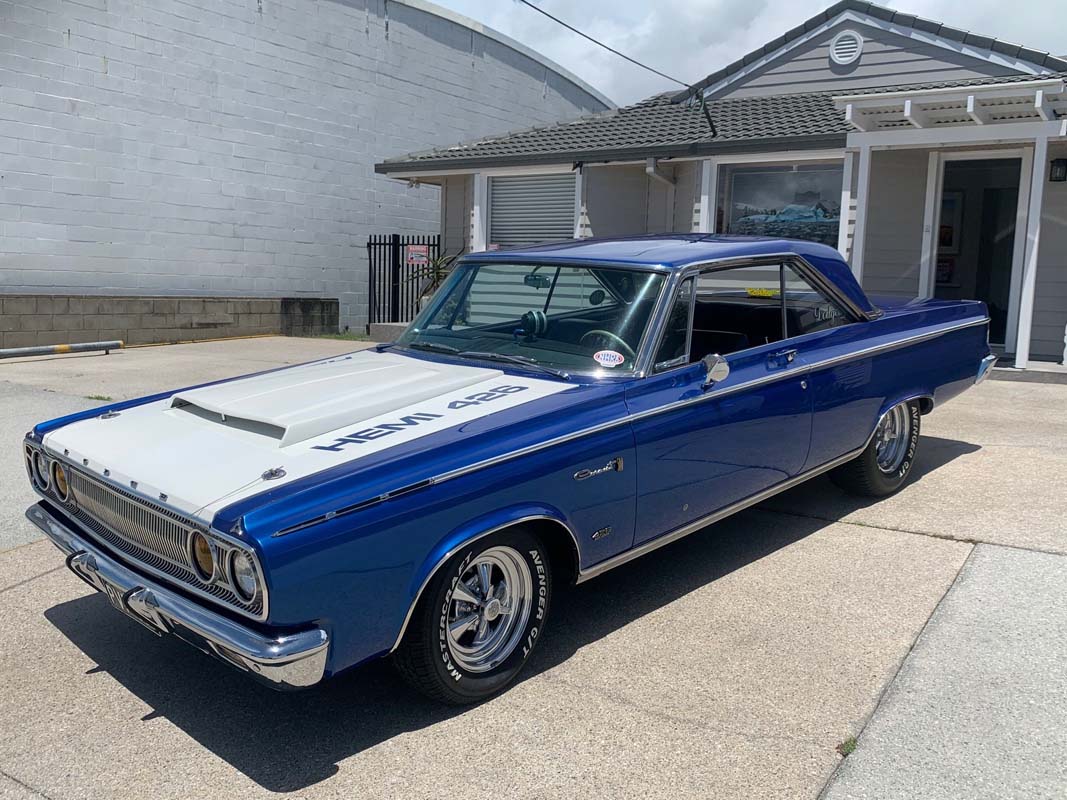 In the interwar years, Dodge cars were prominent in Australia, thanks to a range that was tough and reliable. Most Dodges from this period featured locally-made bodies on imported chassis and running gear. More often than not, those bodies came from T.J. Richards & Sons in SA, which was Holden Motor Body Builders’ main rival and would go on to be a cornerstone of Chrysler Australia.

In those early years, the distribution of Dodge, as well as Plymouths, Chryslers and DeSotos in this country was something of an ad hoc affair before a group of 18 distributors formed ‘Chrysler Dodge DeSoto Distributors (Australia) Pty Ltd’ in 1935.

Responding, in part, to the launch of the Holden by GM-H in 1948, the local distribution operation was brought under Chrysler Corporation control in 1951 and renamed Chrysler Australia Ltd.

Through the 1950s, locally-assembled Dodges combined elements of Plymouth and DeSoto models, creating a confusing array of variants that differed little mechanically.

Alongside the Chrysler Royal of the late 1950s, Dodge Custom Royals were also assembled locally, followed by the larger Dodge Phoenix from 1960.

Officially in Chrysler Australia’s lineup for more than a decade, the Phoenix became the best-known Dodge passenger car locally, but it was only one of a string of models offered by Dodge in North America.

The Coronet was one of those models and has a US history stretching back to 1949, debuting as an upmarket trim level above the entry-level Wayfarer and mid-spec Meadowbrook. It would lose its premium status to the Royal in 1954, then become an entry-level model in 1955. 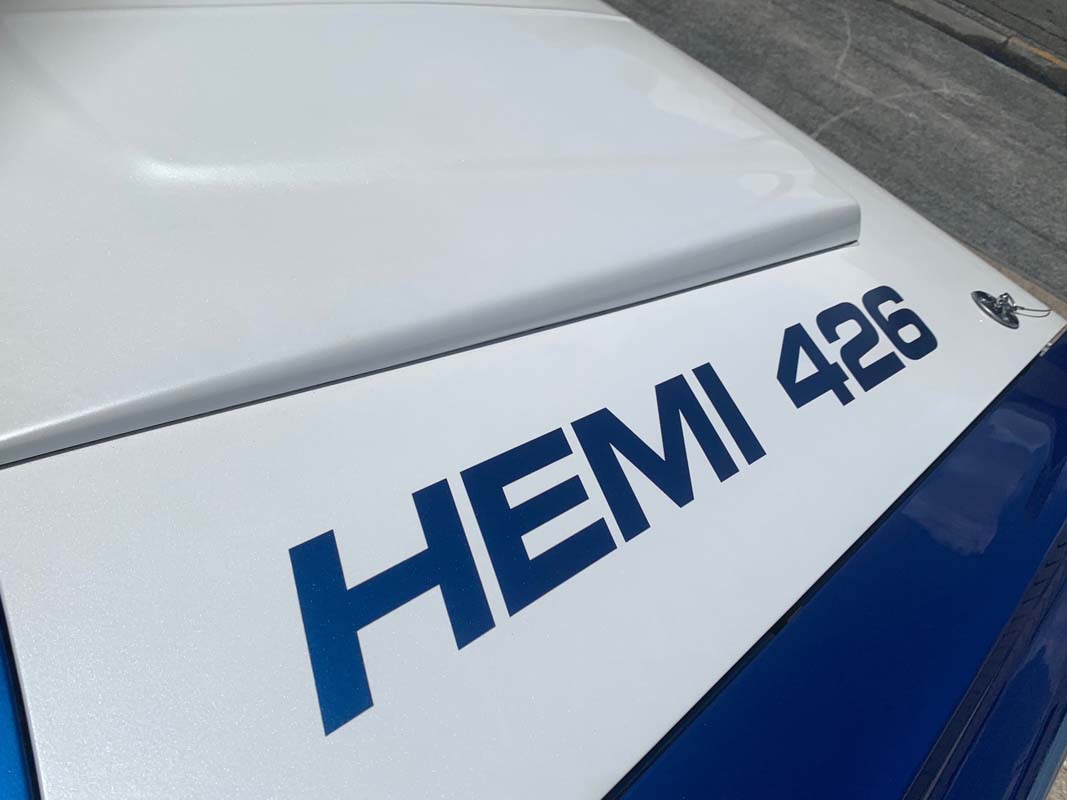 Removed from Dodge’s American lineup after the 1959 model year, the Coronet was back in 1965, once again as an entry-level model, but not the cheapest new Dodge you could buy. That position had been taken by the Valiant-based Lancer compact, which evolved into the Dart for 1963.

Confusingly, the Dart name had been applied to a full-sized Dodge the year before, reflecting the somewhat chaotic approach to model names and trim levels that was a feature of Dodge cars during the early 1960s.

Things had settled, at least a little, by 1965 when the Coronet returned. Occupying a broad middle ground, the Coronet could be had in base trim with a six-cylinder engine or V8, above which sat a Coronet 440, also with a choice of six or V8 power, but offering better trim and more features as standard. A Coronet 500 was the premium offering, only available with a V8 and limited to hardtop coupe and convertible body styles.

The choice of V8s for the Coronet in 1965 ranged from 273 to 383 cubic inches. A 413 V8 was limited to the bigger Dodges, like the Polara and Monaco, while a 426 Hemi was offered in two levels of tune as part of a special ‘Hemi Charger’ that was a competition-only package and not for street use.

The pattern set by the 1965 Coronet would remain unchanged, more or less, until the model was dropped for the second and final time in 1976.

With a smaller and lighter body than the Polara and Monaco, those 1965 and later Coronets could make greater use of the larger V8 engines available. Drag racers particularly appreciated the big-engine-in-a-small-car formula and one of those was Dick Landy. 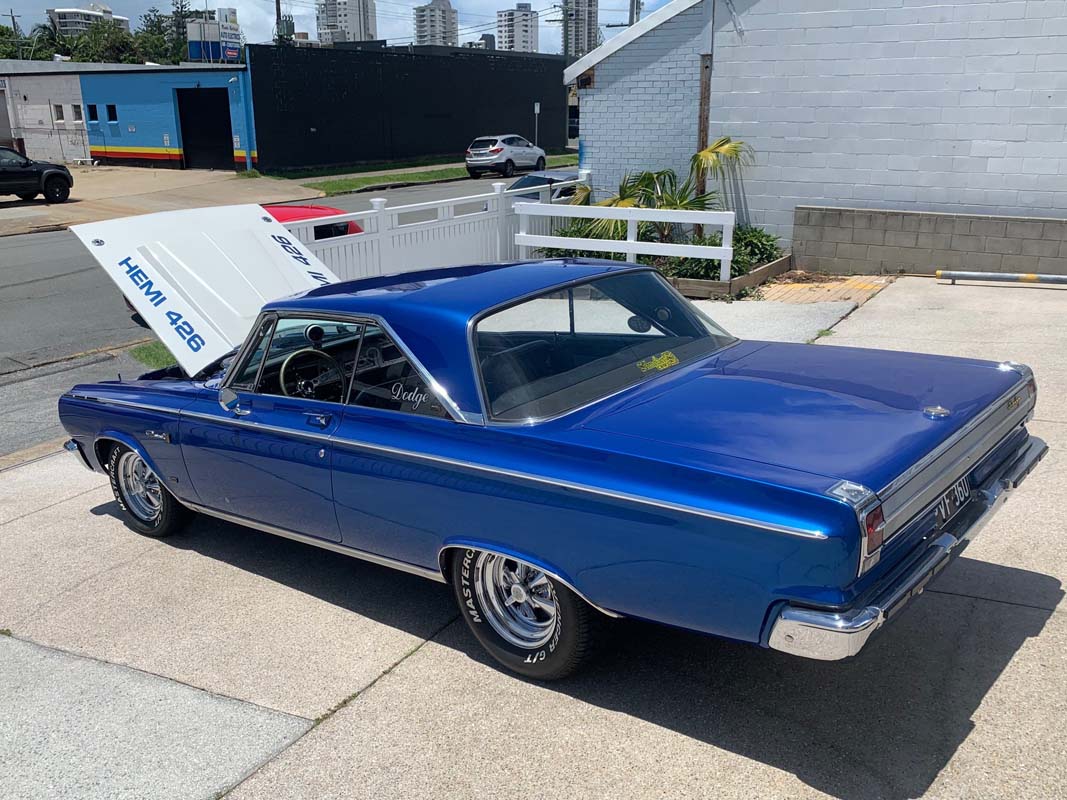 Looking like a cross between Lee Majors and ‘Hoss’ from Bonanza (kids, ask your grandparents), “Dandy” Dick Landy was a larger-than-life character in the boom years of American drag racing in the 1960s.

Born and raised in California, Landy studied mechanical engineering at university and built high-performance marine engines before turning his focus to drag racing. His rise coincided with that of Mopar’s performance engines and, after cutting his quarter-mile teeth on Fords, he would switch to Plymouths in 1962, then Dodges in 1964.

Landy benefitted from Dodge sponsorship and the latest Hemi V8s under the bonnet, but his success wasn’t purely down to the car. He was a fast driver in Stock, Super Stock and A/FX classes and used his engineering nous to build what many regard as the first ‘Funny Car’ in 1964.

As drag racing became more of a spectacle and drivers became celebrities, Landy’s natural showman ability made him a perfect fit for the sport.

Often seen in all-white clothes and chomping on an oversized cigar (that was never lit), Landy had enough clout in drag racing by the late 1960s that, when the NHRA tried to squeeze him out of the Stock class, he joined other “name” drivers like Bill ‘Grumpy’ Jenkins and ‘Dyno’ Don Nicholson in a travelling circus that was so popular it led to the creation of Pro Stock in 1970. 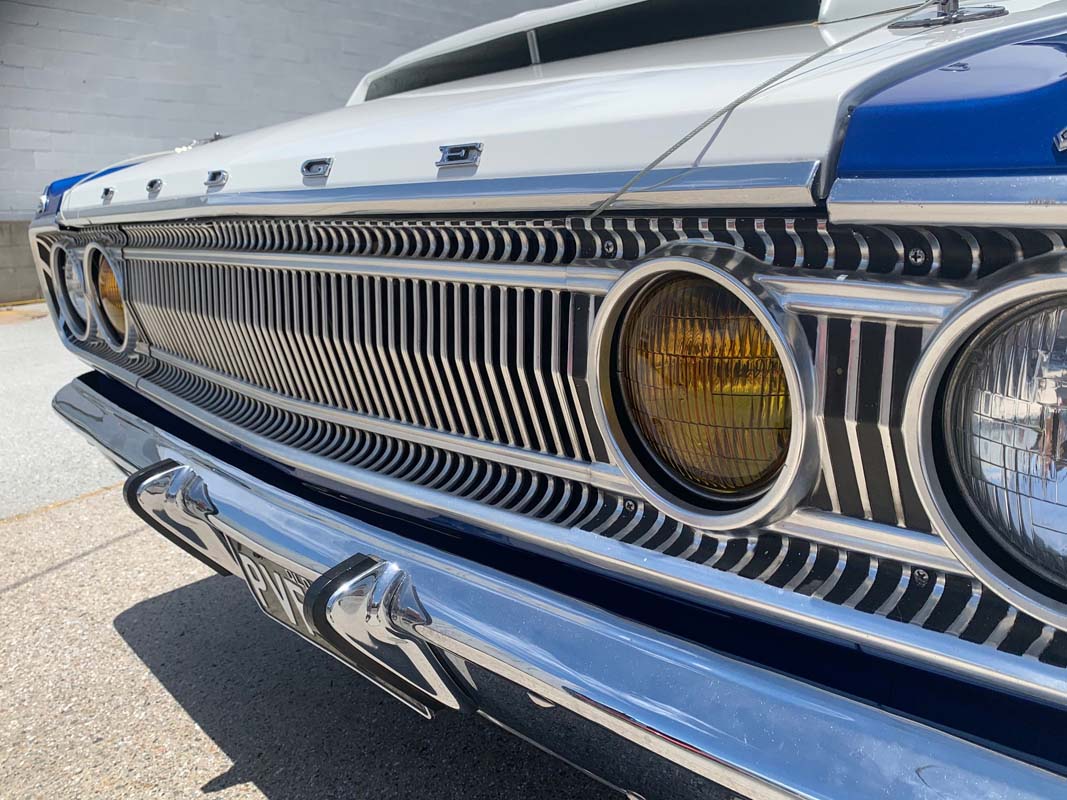 The NHRA next tried to limit the dominance of Hemi-engined cars by adding weight penalties that eventually led Landy and other Mopar teams to walk away from the sport.

Landy’s connection to Dodge remained, though, and he would regularly make appearances at Dodge dealerships, conduct driving clinics and attend other promo events. 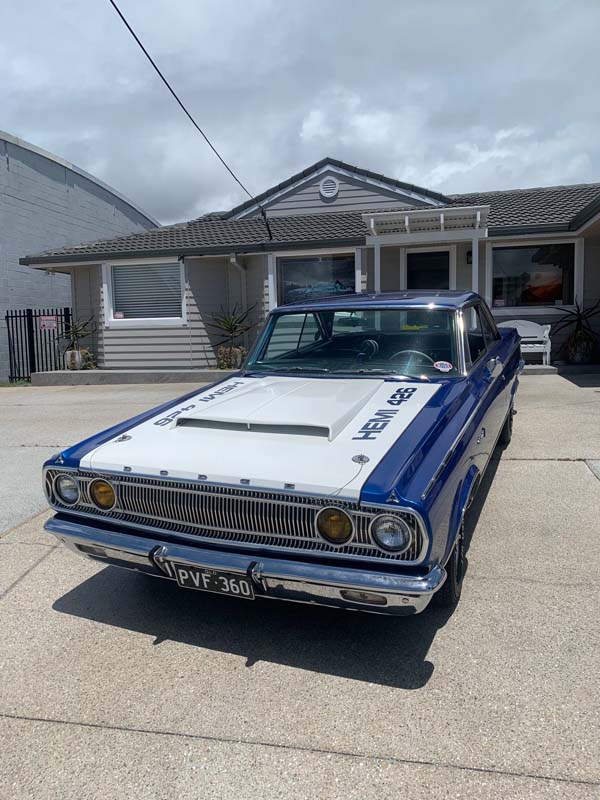 As already mentioned, the Coronet is a rare beast here and one with a genuine DLI-tuned 426 Hemi engine even rarer. The owner of the car featured, Cliff Hoad, was lucky enough to get both. And it all happened by accident.

Cliff was living in the US at the time, touring with his band, Kings of the Sun. In the downtime on those tours, he loved to check out car shows and swap meets. And being a Mopar man since his very first car – a VF Valiant – he was always on the lookout for cool Chryslers, specifically a 1965 Dodge Coronet with the distinctive one-year-only pillarless coupe roofline: “My favourite Mopar was a 2-door pillarless Coronet, inspired by the original Landy altered wheelbase Dodge.”

Cliff had been searching, both here and overseas, for a ’65 Coronet pillarless coupe for the better part of three years, and it was on one of those downtime trips that he finally spotted his dream car.

“I saw it on the back of a trailer at the Pomona Swap Meet in December, 1990 and it was love at first sight,” Cliff laughed.

A former drag car, but unused since the motor blew up, the Coronet 500 wasn’t running, but that didn’t matter to Cliff, because he already had plans on what he was going to put under the bonnet.

“All I needed was a Hemi and the man himself – Dick Landy - to install it," Cliff added. "The seller told me he knew Landy and would introduce me - if I bought the car.” 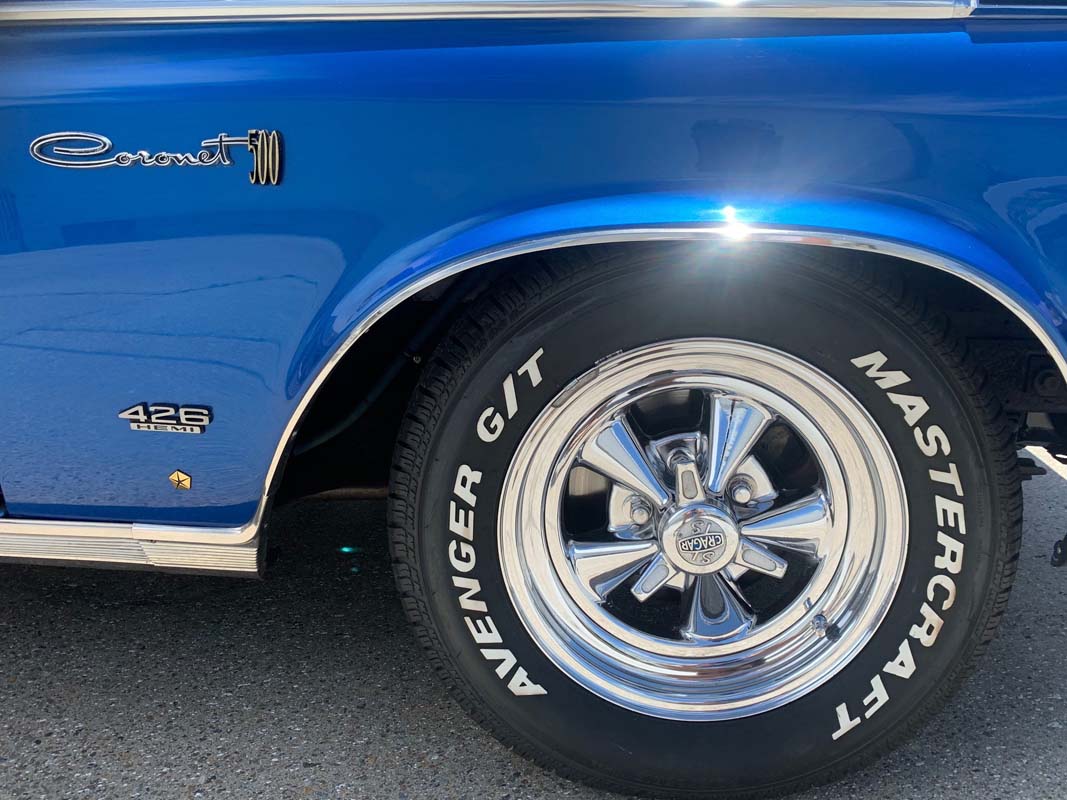 For Cliff, that was a no-brainer, so the deal was done and the Coronet sent to Dick Landy Industries in Northridge, California, for a Hemi engine install. Landy was still active in the business at this time, so having the legend do the actual install of the Hemi was a dream come true.

The DLI formula included porting of the heads, a set of JE pistons and a “secret” race-spec cam, but most of the internals are as Chrysler built them.

A low-rise dual-quad intake manifold and a pair of Carter AFB carbs crown the engine, with Landy-built custom 2 1/8-inch headers leading to a 3-inch Borla exhaust with straight-through mufflers.

It’s essentially a Street Hemi package, and while the combination hasn’t been tested on the dyno, Cliff estimates it puts out around 500hp.

An Art Carr-prepped TorqueFlite 727 auto was bolted to the back of the Hemi, with an 8 3/4 Mopar diff and 4.10 gears completing the driveline.

Helping get that power to the ground are Landy de-arched race springs at the rear, with stock torsion bars up front, aided by Monroe shocks. Brakes are discs with four-piston Chrysler calipers on the front wheels and 11-inch drums at the rear.

While getting the car and the Dick Landy-built engine was a dream, getting the Coronet registered in Australia was a nightmare...

Returning to Australia in ’91, Cliff had the Dodge shipped to his Queensland home soon after, which was the easy bit – getting the car registered was a lot harder.

At the time, the Coronet couldn’t be registered in LHD form in Queensland and an RHD conversion wasn’t an option for Cliff, as it would have destroyed the originality of the car. But, in the expectation that, somehow, he was going to get it registered, Cliff decided to press on with a refurbishment of the car. Starting with the Coronet’s exterior, Cliff stripped it back in preparation to receive a new paintjob.

“I had Glen Henderson in Brisbane paint it,” Cliff recalled. The paint, a PPG custom metallic turquoise blue, is accented by highly-polished Cragar S/S 15-inch alloys and an abundance of chrome trim that was a feature on the Coronet 500. Cliff could have stripped the chrome trim, but he was building an homage to Dick Landy’s Dodge, not a clone, so all the garnish stayed.

The finishing touch outside was a genuine Race Hemi bonnet with large air induction scoop and ‘HEMI 426’ callouts. 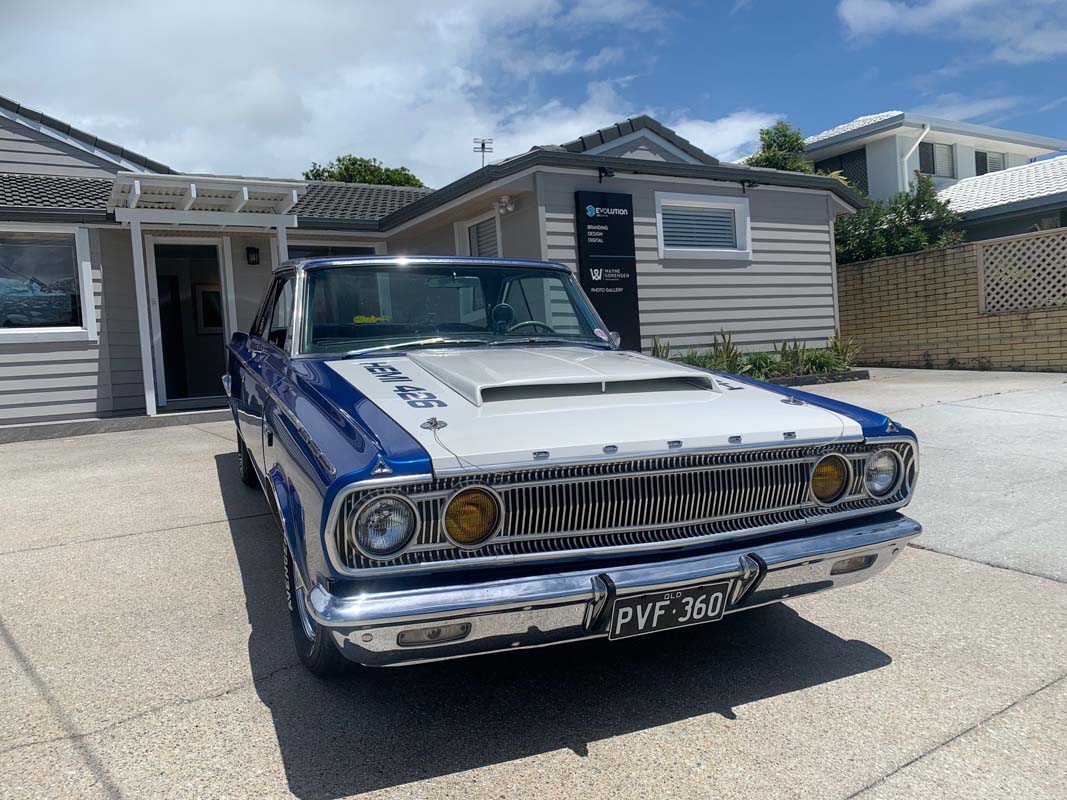 Inside, the stock Coronet 500 trim was left largely unchanged, which meant lots of aluminium and chrome garnish, including on the door cards. Seats are the original vinyl-trimmed units front and rear, while sensible additions made by Cliff include an AutoMeter tach, oil pressure and temp gauges.

“I got it all looking sensational, but I couldn’t register it. It was madness,” Cliff laughed.

In the meantime, life intervened, including more touring with Kings of the Sun and the build of a T-bucket rod, so the Dodge was put into hibernation.

That hibernation lasted two decades, by which time the registration rules in Queensland had been relaxed to allow LHD cars like the Coronet with its Hemi to go on full reg.

Some refurbishment of the brakes (which Cliff upgraded with power assistance during the original refurbishment phase) and a new, Hemi-suitable Chrysler radiator were the only changes needed before the car was registered for the first time in 2017 – more than 25 years after it landed here.

Despite three decades of ownership and three years of street use under its tyres, the Coronet still looks good today, which makes it a tough decision for Cliff to sell it (see breakout), but he says that now feels like the right time to move the car on.

“It’s been a part of my life for 30 years,” Cliff explained, “But I am prepared to sell it – for the right price.”

Cliff rightly fears that it may be chopped up and lose a lot of its ‘60s drag racing vibes, so will only sell the car to the right owner, too.

A Mopar fan with an understanding and appreciation of ‘60s NHRA drag racing, Dick Landy and Dodges is a small niche and Cliff understands that, but he’s sure there’s someone out there who’ll love this car as much as he has.

Maybe that someone is you.

After enjoying this car for two decades, Cliff has decided it’s now time to move it on.

Apart from the Dick Landy engine, the appeal in this Coronet also lies in its low mileage, rust-free condition.

Street registered, this car is able to embarrass many newer cars on the strip. And thanks to that “secret” Dick Landy tune, there’s an unmistakable sound, too.

The asking price of $135,000 ono is a reflection of this car’s one-of-a-kind status and rarity in Australia.