After decades as a working vehicle, this classic Holden was taken down a different path.

Regrets. As Frank Sinatra famously sang, we’ve all had a few. And for many of the JUST CARS tribe, regrets have followed the sale of a much-loved car. 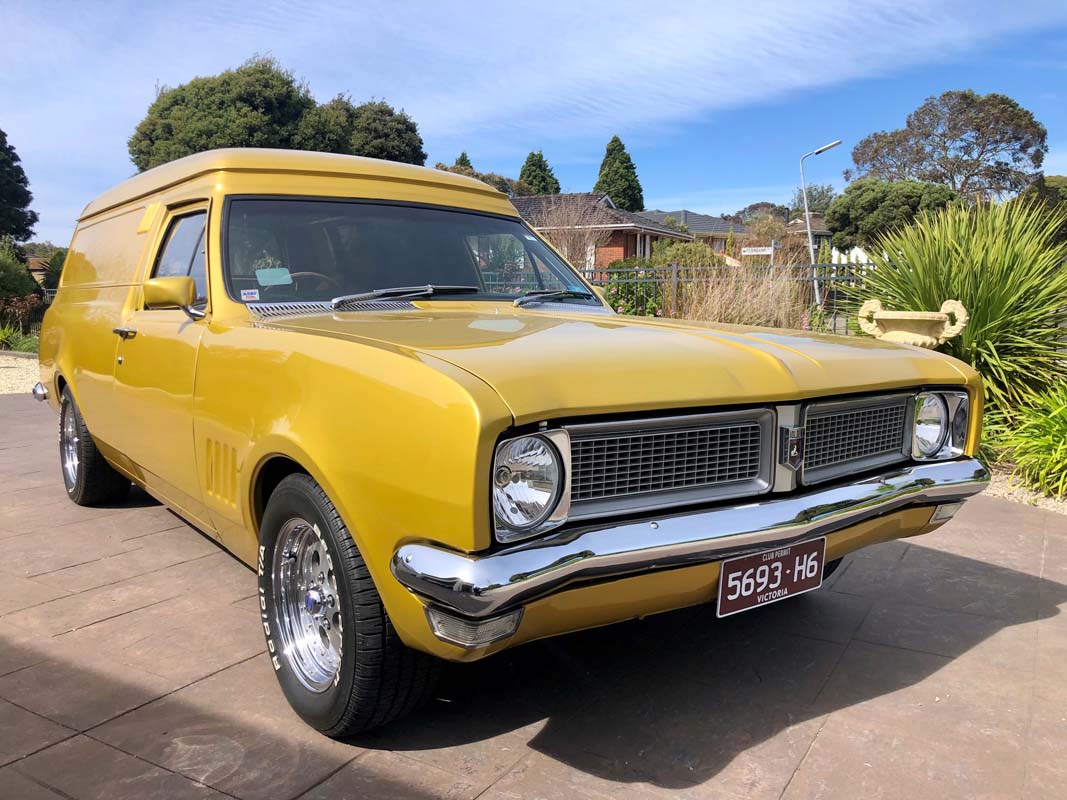 Those sales are often for the best and most noble of reasons, like putting a deposit down for a first home, funding the kids’ education or simply to purchase a car more suitable for a family.

Usually, the regret come years or even decades after the sale, when it's too late to find that lost love, or it’s become too expensive to reacquire. But sometimes, the pangs of loss are more immediate and can be acted on sooner. Such is the case with the vehicle featured.

Had things evolved a little differently in Holden’s history, we may never have had the HG series. Released in July, 1970, the HG followed the HK and HT, but it wasn’t planned that way.

GM-H had been feverishly working on the all-new HQ series, but it became apparent that process was taking longer than anticipated and its market release would be delayed, so the HG was introduced to fill the gap. This second update of the HK series broke a cycle of only one mid-life makeover before an all-new model that had been established since the first Holden was released in 1948. 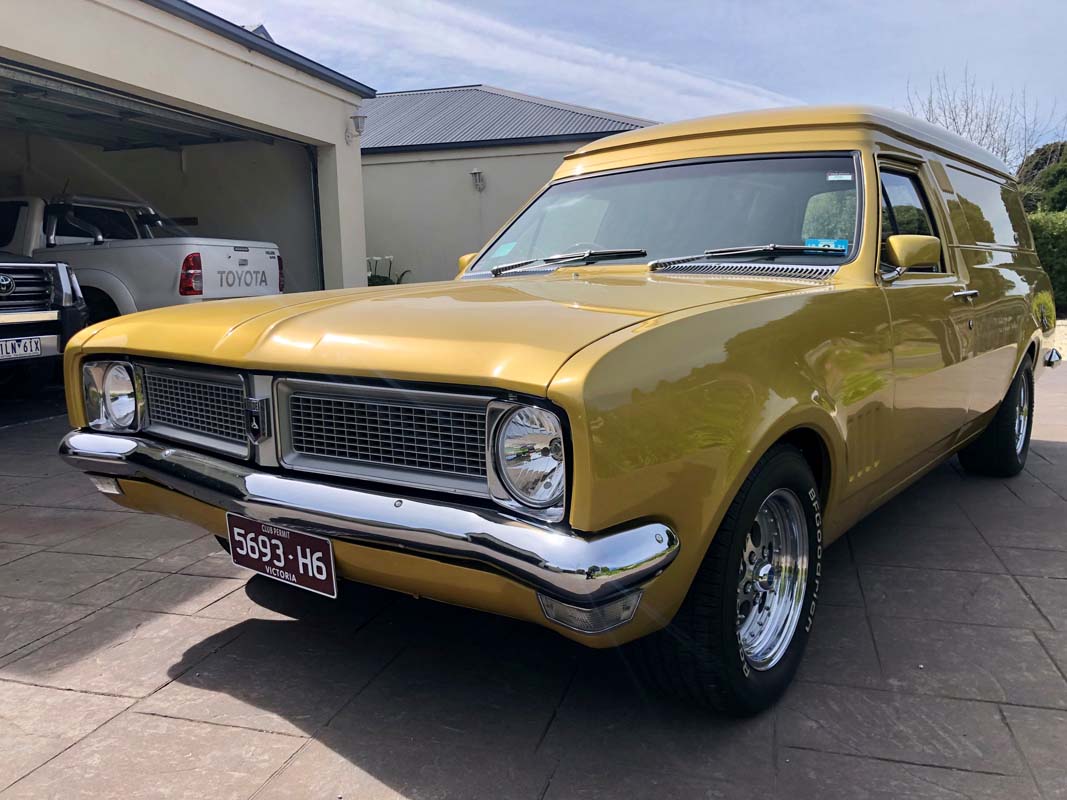 While it was predominantly a minor styling makeover of the HT, the HG did introduce the Trimatic automatic transmission.

Replacing the two-speed Powerglide auto, the three-speed Trimatic was designed and built in Australia, following the locally developed and manufactured 253 and 308 V8s that had been released with the HT series.

While the Trimatic has come to be derided in some circles, it was nevertheless significant and was the HG’s main point of difference over the HT.

Other differences included a new grille, modified tail lights, some new paint colours (or at least new names for existing colours) and shuffled badging and trim. 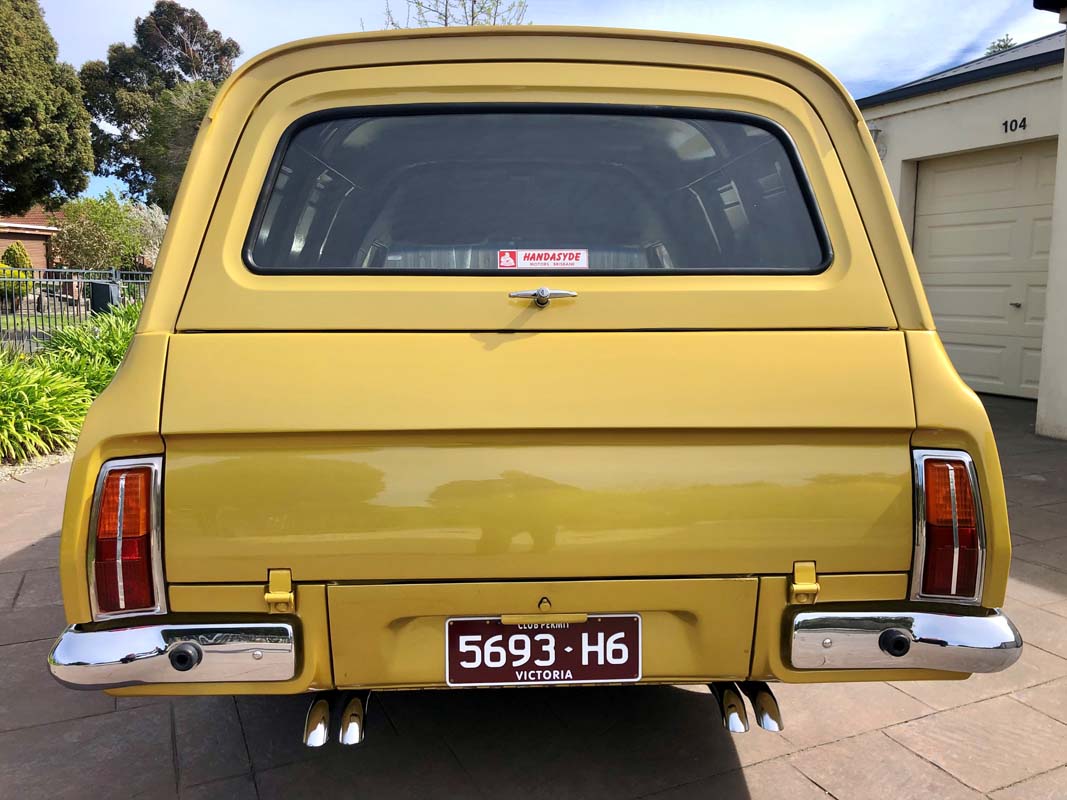 After breaking the one-model, one-update cycle with the HG, GM-H also broke with tradition on when they released the Holden utes and panel vans. Normally, these came to market weeks, and sometimes months, after the sedans and wagons, but for the HG, the whole range was launched on the same day – 26 July, 1970.

Thirteen models made up the HG series, from the entry-level Belmont, through Kingwood and Premier to the premium Brougham and sporty Monaro.

As with the HT series, the HG commercial offerings comprised utes and panel vans, and while the utility was available in Belmont and Kingswood trim, the panel van remained a poverty-spec Belmont.

While it wasn’t originally planned, the HG series was nonetheless a success for GM-H, with 155,787 built. This success came against strong competition from Ford and Chrysler, as well as Japanese cars.

Holden’s commercial range wasn’t immune to the Japanese invasion, either, but Holden and Ford utes continued to be the overwhelming favourite with tradesmen and farmers around the country.

That was certainly the case with the Belmont panel van pictured, which started out as a humble working vehicle, but one with some intriguing irregularities. 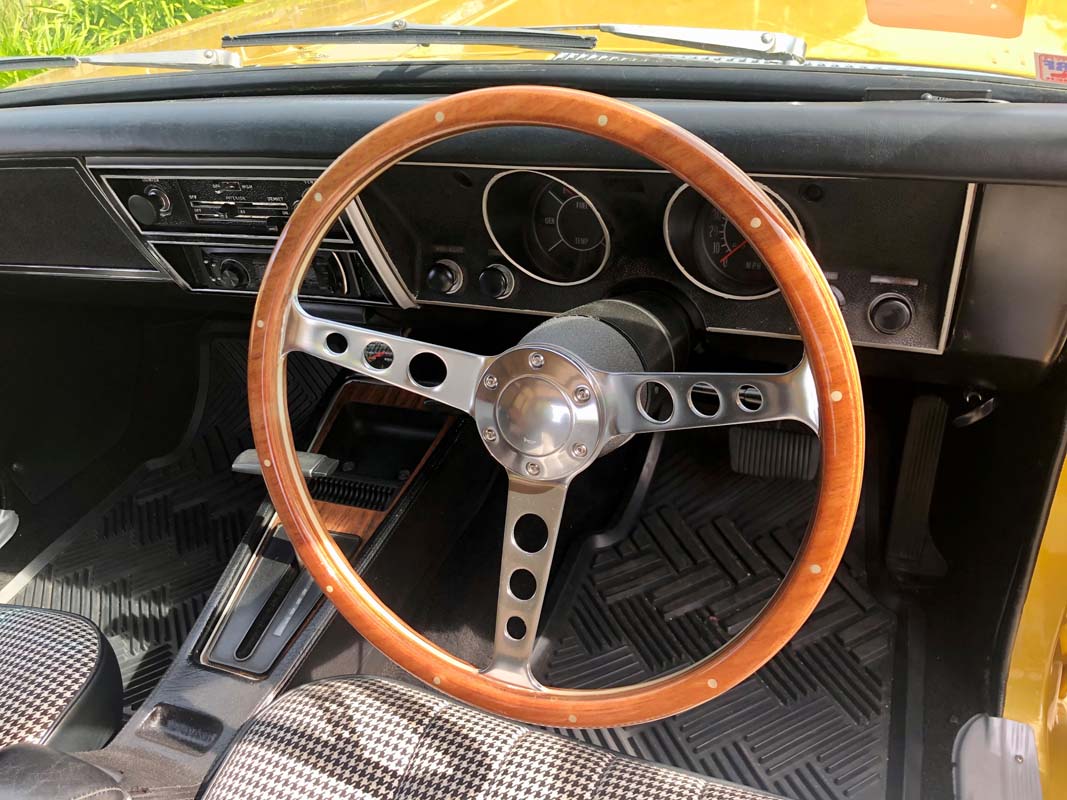 A casual glance at the spec of this van shows it was originally a Glacier White Belmont with green vinyl interior, bench seat, six-cylinder engine and three-speed column manual. So far, so normal, but a deeper dive into its VIN shows it was built in August, 1971. ‘Hang on,’ we hear you say. ‘The HQ series was released in July, 1971, so that can’t be right.’ Well, it is.

There’s evidence to show that HG production continued, at least at GM-H’s Acacia Ridge plant in Brisbane, for a period after the HQ’s introduction.

What’s also noteworthy is that the factory-fitted engine was a high-compression 202 six. This engine, an upgrade on the 186, wasn’t officially introduced until the HQ series, but a number of HGs came down the line with the larger six, at Acacia Ridge and possibly other GM-H plants, too.

Sold new through Handasyde Motors in Stones Corner to its first owner in Cannon Hill, this Belmont panel van has lived in and around Brisbane for the majority of its first 50 years.

After more than two decades in stock form, the original owner of this Belmont van decided to treat it to a makeover as part of a comprehensive rotisserie restoration in the late 1990s.

While the full story is unknown, the van needed new floors, but the rest of the sheetmetal was apparently pretty good. GTS guards were fitted in place of the originals and GTS external mirrors were added, too. After a fair bit of work on the body, it was resprayed in Sunburst metallic (a HQ colour), with the wheels upgraded to Dragway Indys.

New rubbers were fitted and all the chrome and stainless trim was either refurbished or replaced.

Inside, most of the attention was devoted to the cabin. The stock bench seat was replaced with GTS buckets in black vinyl and houndstooth cloth. A centre console was added, and while the dash remained stock, a nice aftermarket woodrim steering wheel was fitted.

Under the bonnet, the 202 was swapped for a 253 V8 that had a fair bit of work done itself, including forged pistons, a mild cam, quadrajet carby, Edelbrock intake manifold, tuned extractors and a custom exhaust system.

The V8 runs to a Trimatic auto, but whether this is stock is unknown. Same goes for the diff.

It seems the owner had comfortable cruising with a bit of get-up-and-go in mind, as the set-up isn’t crazy powerful, but the van’s current owner, Wayne Lepp, says it does hook up nicely when you give it the right foot.

Now we get to the regret part.

After a bunch of the aforementioned work was done, the original owner sold the van. Given what had been put into it, the regret that followed is not surprising, but in this case it was strong enough to convince him to buy it back.

Upon repurchase, it’s believed more mods were made, including all new springs and shocks. Again, it seems comfortable cruising was the intention, as the suspension is only mildly lowered and isn’t rock hard.

The Belmont stayed largely unchanged thereafter, but following the owner’s passing, his family consigned the van to Seven82Motors in Nerang for sale.

Wayne enters the story at this stage.

Late last year, he had journeyed up to Queensland to check out a Shelby Cobra replica that Seven82Motors had listed. The Cobra proved to be not up to par, but while in the showroom, Wayne spotted the Belmont and was instantly attracted to it.

The van’s overall outstanding condition appealed, so on something of a whim, Wayne bought it and had it freighted down to Victoria.

Interestingly, this is Wayne’s first classic Holden and, since purchasing it, he’s added around 2,500kms to an odometer that now shows 83,000km.

But with Victoria’s ongoing COVID-19 lockdowns, Wayne certainly hasn’t been able to drive the van as much as he’d like. Those same lockdowns have meant car shows have been obliterated from the 2021 calendar, so there have been virtually no opportunities to showcase the vehicle to an appreciative audience, either. 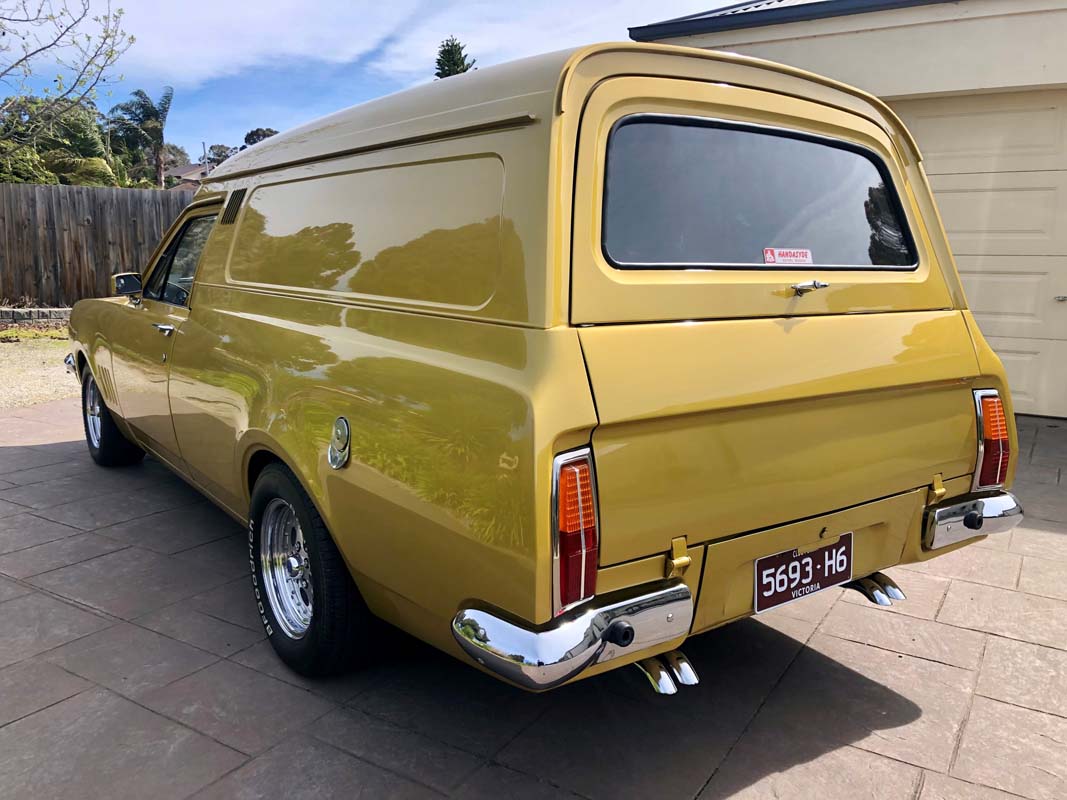 Wayne remains keen on a Cobra replica, so as much as he loves the van, he’s decided to put it on the market (see below).

At time of writing, there’s some light visible at the end of the pandemic tunnel, so there may be opportunities this summer for those of us in the midst of COVID mess to get out and enjoy our cars again.

While Wayne would prefer to enjoy newfound freedoms with the sun on his face in a neat Cobra roadster, there’s bound to be someone out there who’d rather celebrate the return to normality behind the wheel of a classic panel van – then sleep out in the back after a day on the road!

While this panel van remains in remarkably good condition since it was rebuilt and modified more than 20 years ago, Wayne has done some work on the car recently, including a refurb of the braking system and fitting new hoses throughout.

As offered for sale, this van is ready for more cruising, or could serve as a base for a heavily-customised, ‘70s-style show van. Either way, the combination of the original work done and Wayne’s recent repairs means there’s nothing the new owner needs to do except drive and enjoy.

The van is currently on non-transferable club reg and will be sold unregistered.