Only 70 units of the ‘Jack Roush Edition’ Mustang are being built. And a couple are coming to Australia. 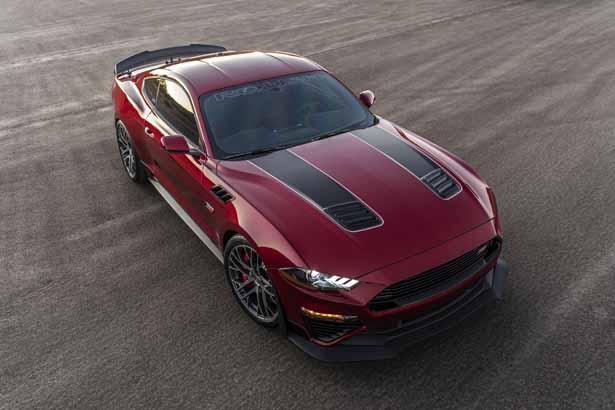 Last October, Ford Australia made waves when they announced the ‘R-Spec’ Mustang with a 520kW and 830Nm supercharged 5.0-litre V8. Roush Performance must have looked at that and said, ‘Hold my Beer’, because a month later, they unveiled a special edition Mustang with a whopping 578kW and 908Nm.

As impressive as those numbers are, the fact that a couple of these high-performance Roush pony cars are coming to Australia is even better… 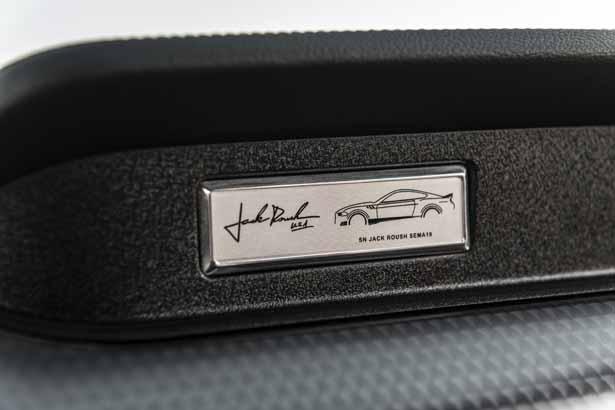 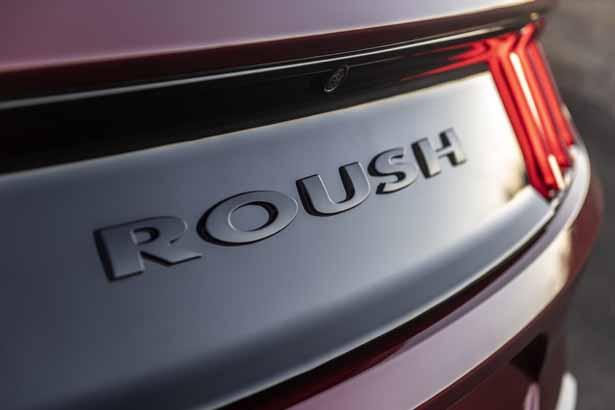 A History in Speed

Jack Roush may not be a familiar name to Aussie performance car enthusiasts, but he’s been just as influential in the US racing and performance car scene as Carroll Shelby.

As a young man, Roush worked for Ford Motor Company (and Chrysler, briefly) before setting up his own business – Jack Roush Performance Engineering - in 1976.

Roush’s racing interests started in drag racing in the early ‘70s, before he moved to circuit racing in the 1980s, specifically SCCA Trans-Am and IMSA competition. Success there led Roush into the big league of US Motorsport – NASCAR - in 1988.

With two drivers’ champions – Matt Kenseth in 2003 and Kurt Busch in 2004 – and 325 race wins in NASCAR Cup at time of writing, Roush Racing (now Roush-Fenway Racing) hasalso won championships in lower-tier NASCAR categories, with over 400 race wins as an engine supplier to other teams also on the resume.

Across all of Roush’s motorsport activities, there’s been one constant - his close connection to Ford. Vocal, and sometimes vociferous, in his defence of the Blue Oval, it came as no surprise that when ‘Roush Performance’ was established in 1995, it dealt exclusively in parts for Ford vehicles.

Initially a supplier of performance parts, Roush Performance started producing modified Ford vehicles soon after, with a string of numbered, limited-edition Mustangs following in the new millennium, including the 360R, 427R, Speedster, Blackjack, 5XR, Hyper Series and RS, while the P-51A and P51B – named after the model codes of the famous Mustang fighter plane of World War II - reflected Roush’s passion for aviation.

The latest creation to come out of Roush Performance’s Michigan workshop continues this limited-edition, high-performance tradition, but takes it to a new level.

Feast your eyes on the 2020 ‘Jack Roush Edition’ Mustang. 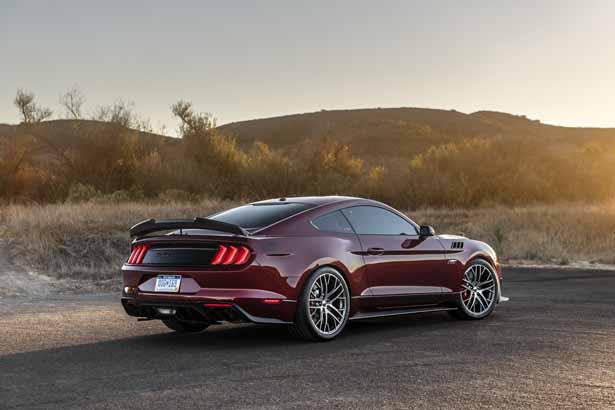 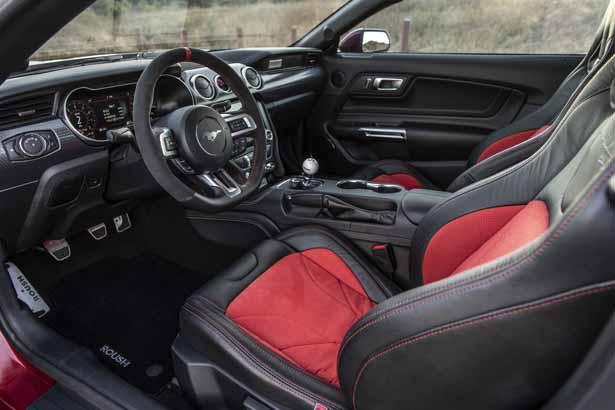 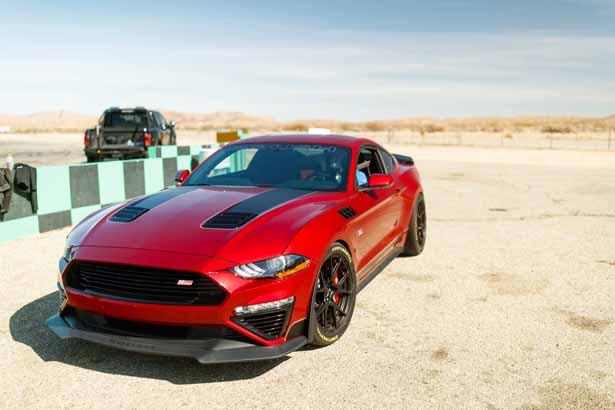 A Tribute to Jack

Simply put, the Jack Roush Edition (JRE) Mustang is the most powerful Roush Mustang ever. Created in honour of Roush’s induction into the NASCAR Hall of Fame, the JRE is a “best of the best” from Roush Performance’s catalogue of proven performance parts. It also includes some parts not previously available.

Leading the way is a Phase 3 Roush supercharger that straps on to the standard Mustang GT’s 5.0-litre V8 and dials the numbers up to 775hp and 670lb/ft – 578kW and 908Nm – regardless of whether a manual or auto transmission is selected. For the record, that’s more than the new Shelby GT500. For now, this Phase 3 blower will be exclusive to the JRE.

To temper the heat generated by all that extra power, a larger radiator is fitted, along with an auxiliary radiator, transmission cooler and diff cooler. The bonnet and front guards are vented, too, while a quad-tip active exhaust system, with H-pipe, is standard.

Twenty-inch wheels are unique to the JRE, fitted with Continental ExtremeContact Sport tyres, while the braking package has been updated with track-ready Brembo 6-piston calipers at each end.

There’s also an active rear spoiler made from carbon fibre, plus a Roush ‘R9’ bodykit that includes a front splitter, custom grille, front corner aero blades and an aerofoil on the rear valance.

Exterior graphics are another JRE exclusive, as are performance seats in leather and suede, a track-ready steering wheel and special finishes for the gear knob and shifter paddles.

An exterior lighting package, bonnet gas struts and engine bay cosmetic package are other features, with each purchaser also getting a Roush-branded key fob, car cover and Certificate of Authenticity. 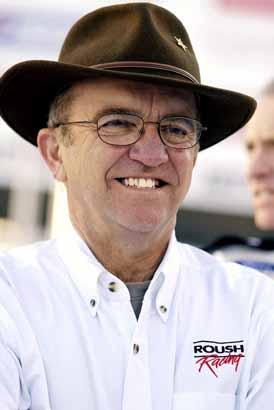 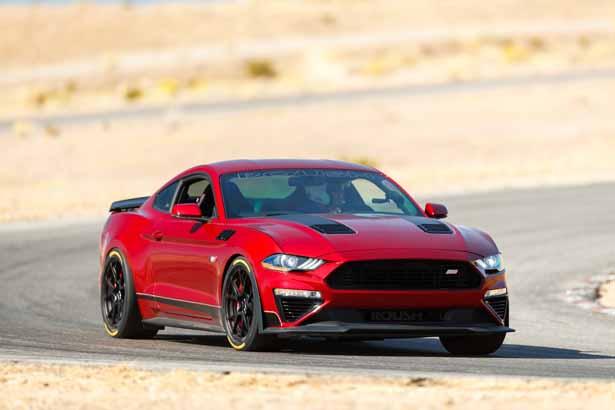 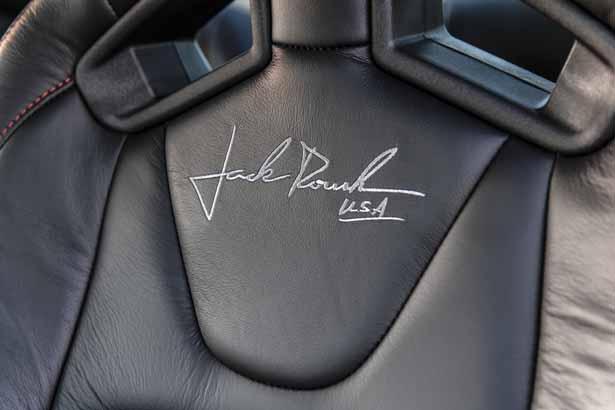 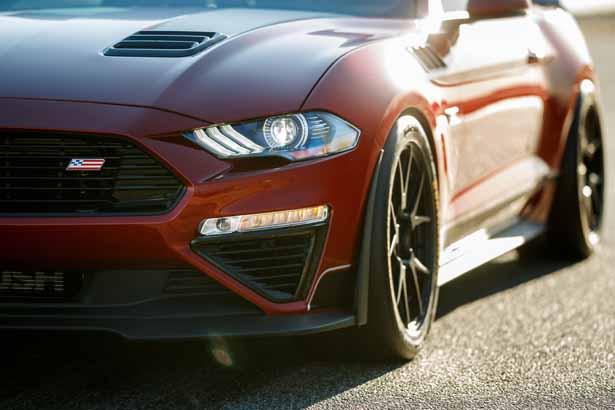 When the JRE Mustang made its official debut at the SEMA show in Las Vegas this past November, Roush Performance announced that only 70 units would be built: 60 for the US market and 10 for the rest of the world.

US pricing for this special edition has since been announced at US$87,720 (including the base Mustang), which should translate to something in the region of $150,000 here.

Mustang Motorsport’s Craig Dean and James Johnson were on site at that unveiling and are excited about this ultimate Roush Mustang, so they’ve been fighting hard to ensure they get at least a couple of them for Australian customers, possibly more if local demand is high.

No matter how many units come here, the Jack Roush Edition is certain to be the most exclusive Mustang on Australian shores.

Want to be one of the exclusive few? Mustang Motorsport are taking enquires now, so get in touch via the contact info below, or see their advert in this issue.

If the JRE is out of your budget, Mustang Motorsport will soon be releasing a Roush ‘RS3’ that has some of the JRE componentry, but will not be a limited-edition. The RS3 is expected to be priced around the $90-100K mark. 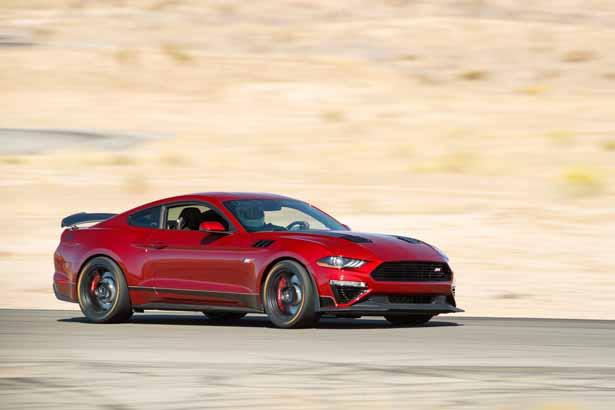 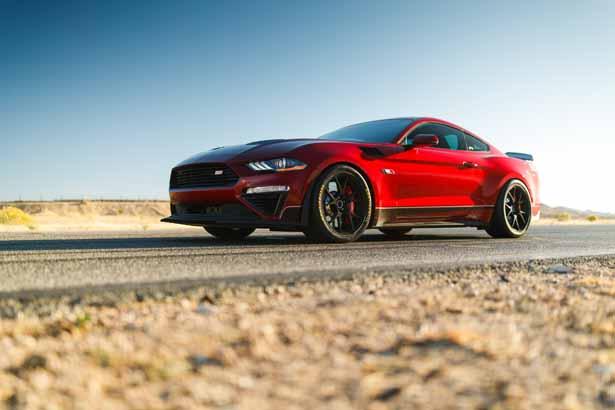 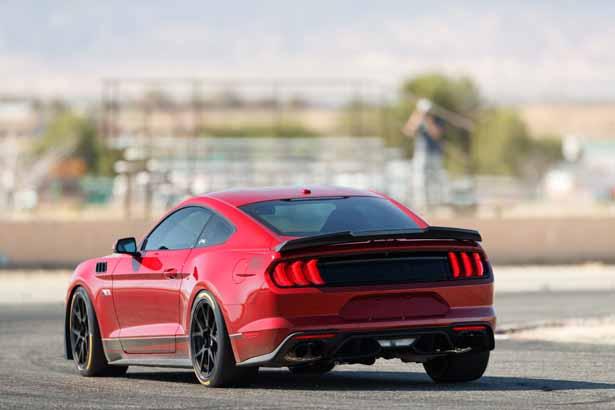 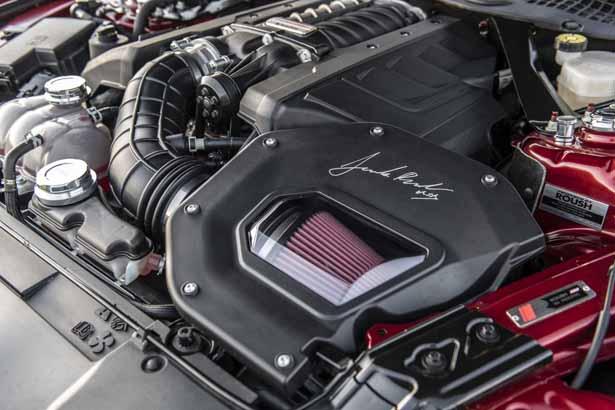 Mustang Motorsport are Australia’s exclusive Roush builder and supplier, with a range of Roush Performance parts they can fit to your current-generation Mustang. As well as performance upgrades, like exhaust systems, cold air intakes and superchargers, a range of aerodynamic and cosmetic parts are also available.

For more details, phone: (03) 9753 5799, go to: mustangmotorsport.com.au or call into the Mustang Motorsport workshop and showroom at: 10 Hayward Rd, Ferntree Gully, Victoria. 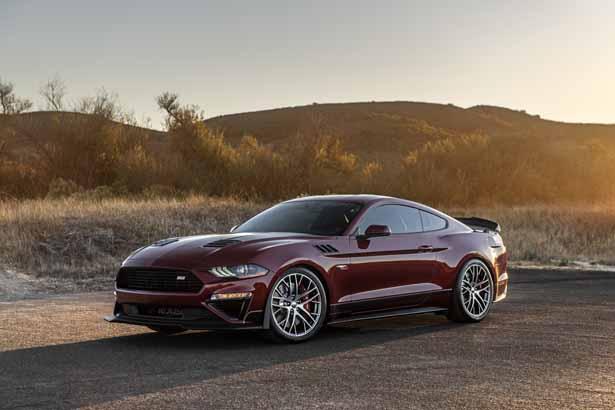 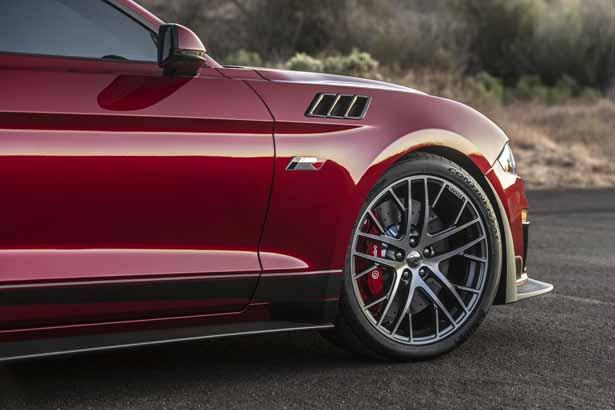 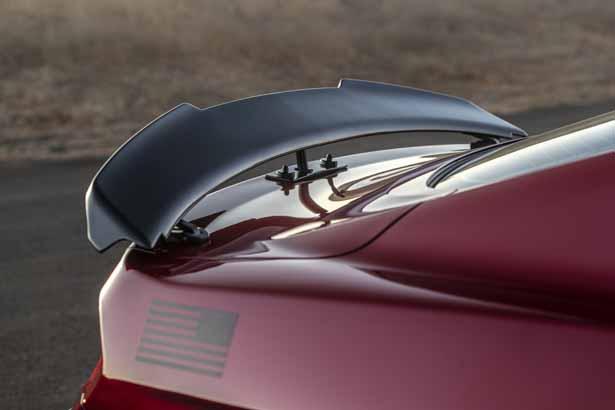 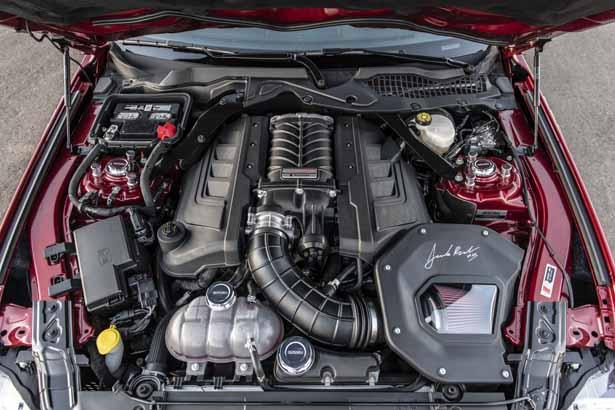 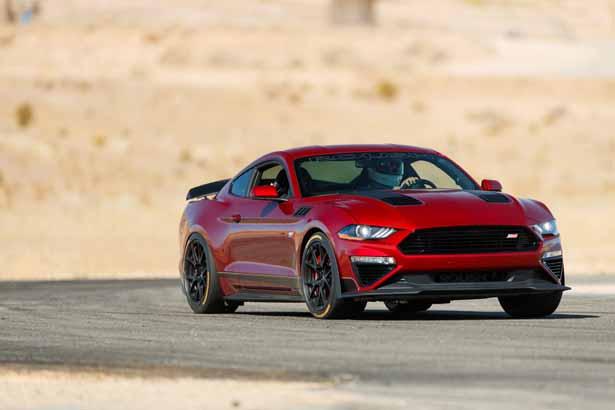 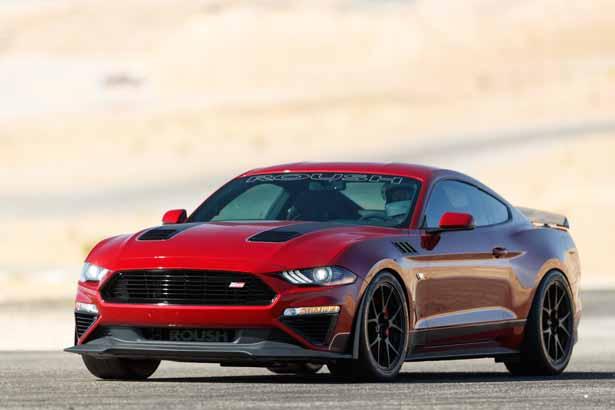 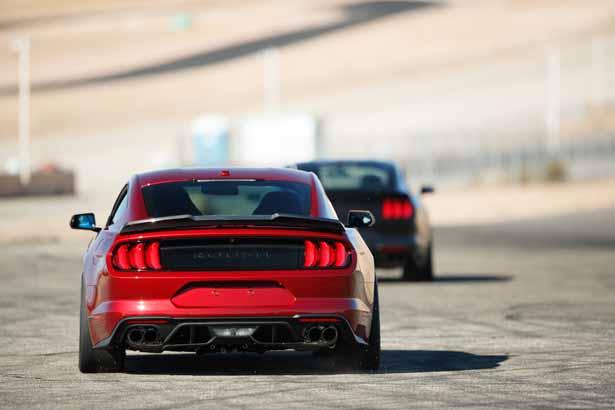