With a vinyl wrap and stylish graphics, this modern Mustang Mach 1 has been transformed in tribute to what inspired the original Mach 1.

This year marks the 75th Anniversary of the first manned supersonic flight, so it’s fitting that a Mustang Mach 1 – a car that took its name from this groundbreaking event - has been modified in tribute to the aircraft that achieved it.

Auctioned by Burns & Co. this past April, the Mustang Mach 1 featured was customised locally, but the inspiration behind it comes from a place – and time - much further away. 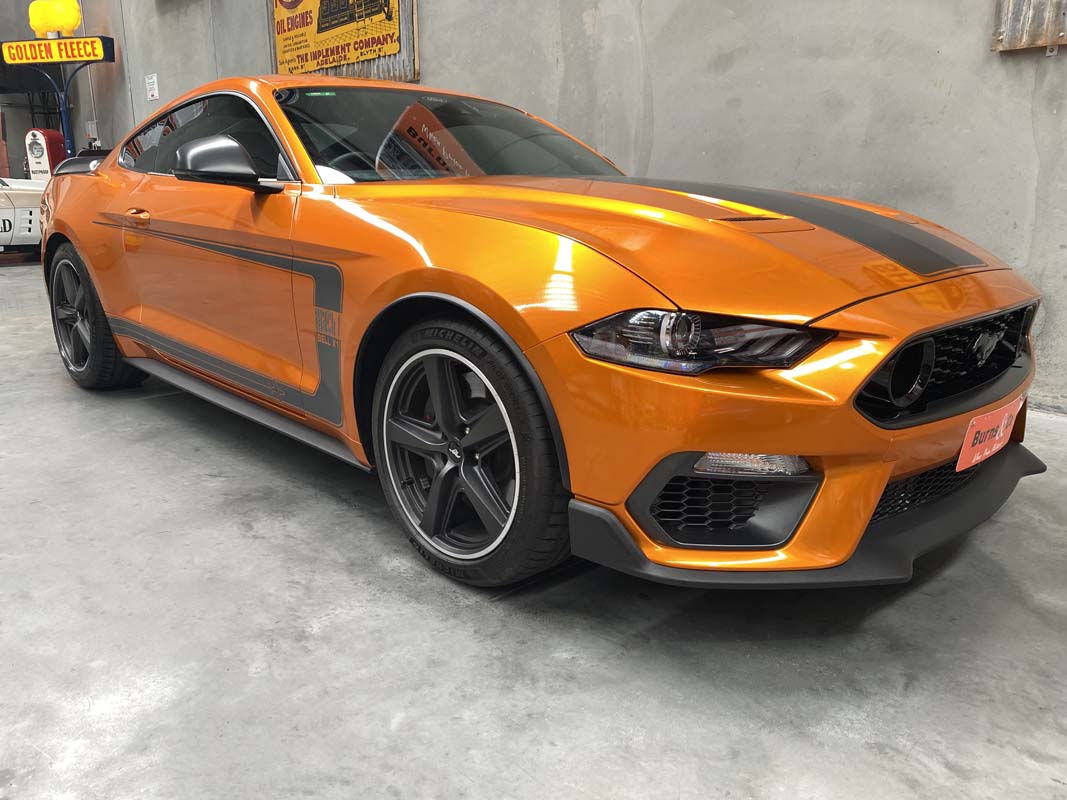 The Mystery of the Sound Barrier

When propeller-driven aircraft ruled the skies, the idea of flying faster than the speed of sound seemed fanciful. Even the most advanced piston-engined fighter planes from World War II could only reach around 500mph (804km/h) – a good 250mph short of the speed of sound, known as ‘Mach 1’ (767mph - 1,234km/h).

As World War II had improved propeller aircraft design immeasurably, it also hastened the development of jet aircraft, which continued after the end of hostilities in 1945 but aircraft in 1945. However, aircraft engineers struggled to overcome the problem of increased air density – and resulting aircraft instability – that came with ever higher speeds.

As speeds increase, the air that creates drag becomes denser, resulting in more drag, hence the development of aerodynamics on cars, planes and even trains to help them cut through dense air more efficiently. 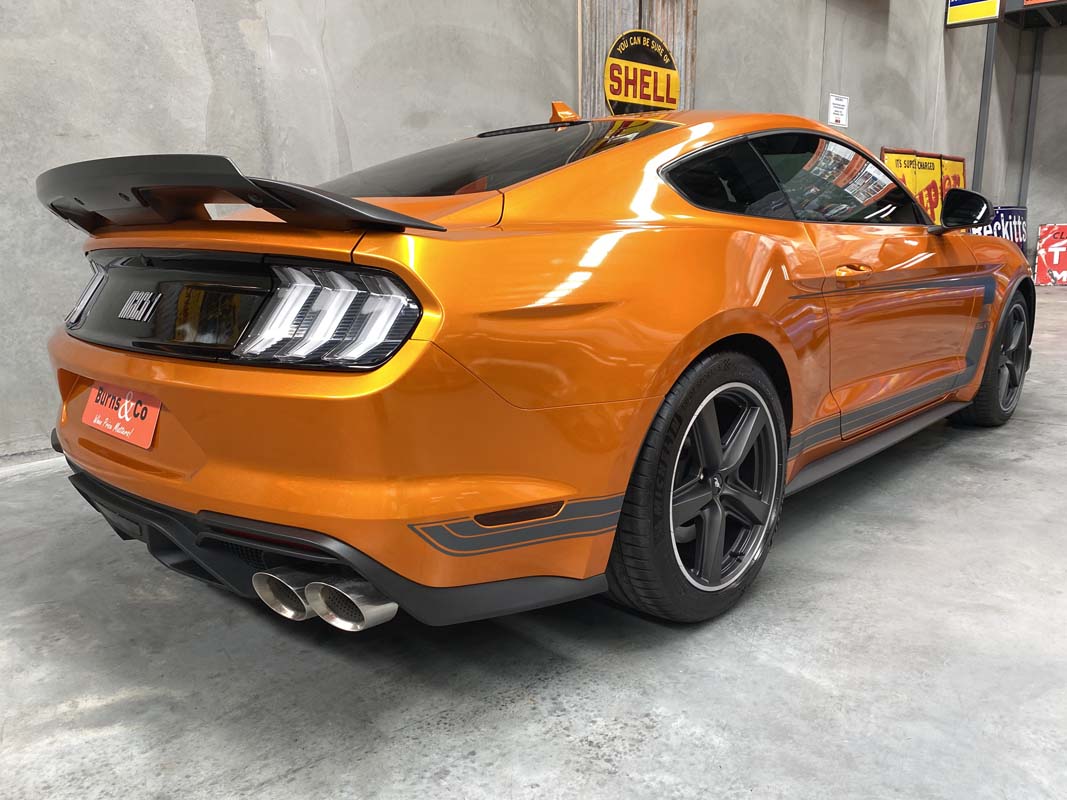 In terms of aeronautical development, some had theorised that, as an aircraft came close to the speed of sound, the wall of air would become so dense that it would be impenetrable, thus leading to the “sound barrier” name.

Others disagreed, including a US Air Force Major named Ezra Kotcher, who began working with Bell Aircraft Corporation in 1944 on an aircraft that could break the sound barrier. 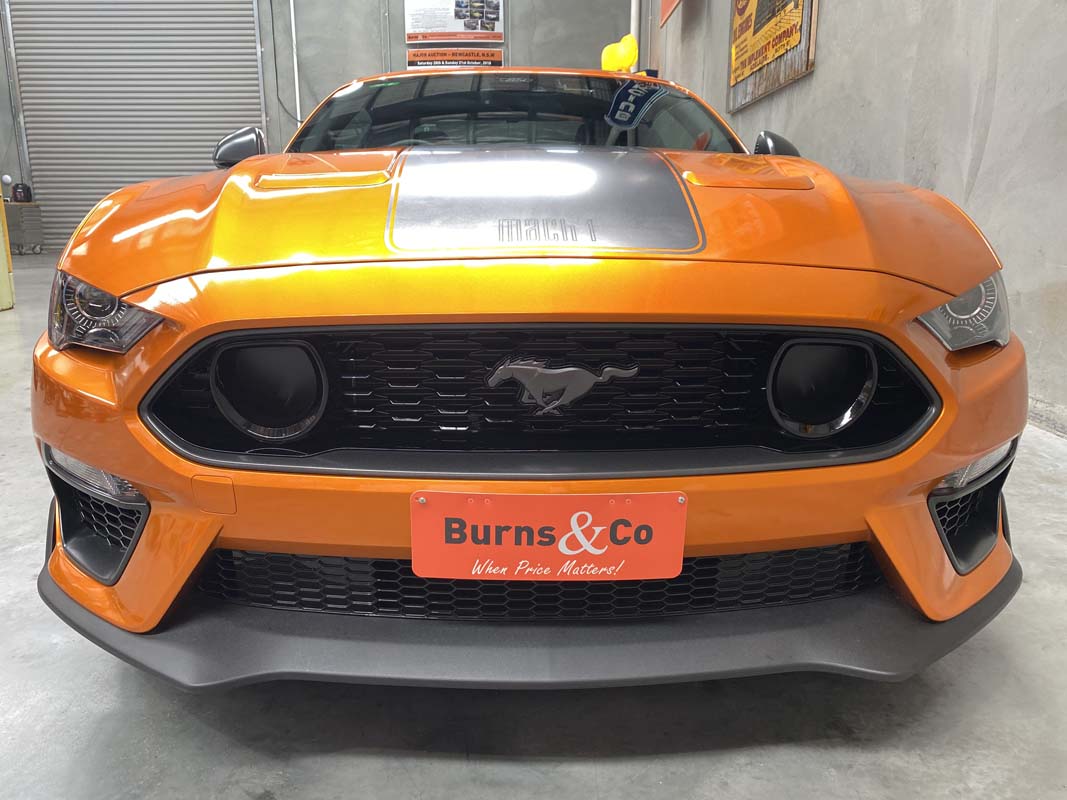 Designed from the outset to exceed 800mph (1287km/h), the great unknown of what lay at and beyond the sound barrier meant the Bell ‘X-1’ was overengineered and would be subjected to extensive non-powered tests before a rocket motor - producing 6,000lb of thrust - was installed in 1946.

Of course, it’s well recorded that US Air Force Captain Charles Elwood ‘Chuck’ Yeager became the first man to officially break the sound barrier, achieving the supersonic speed of Mach 1.06 - the equivalent of 813.3mph or 1,308.8km/h - in the Bell X-1 on 14 October, 1947.

The significance of breaking the sound barrier was such that, even two decades later, it carried enough cachet that Ford tapped into it, introducing a new Mustang variant in 1969 they called the Mach 1.

Only available as a fastback and featuring Ford’s 5.8-litre (351ci) V8 as standard, but with numerous engine and transmission options, the Mach 1 was identified by a race-style fuel cap and bonnet pins, blackout bonnet, Magnum wheels and bodyside striping. 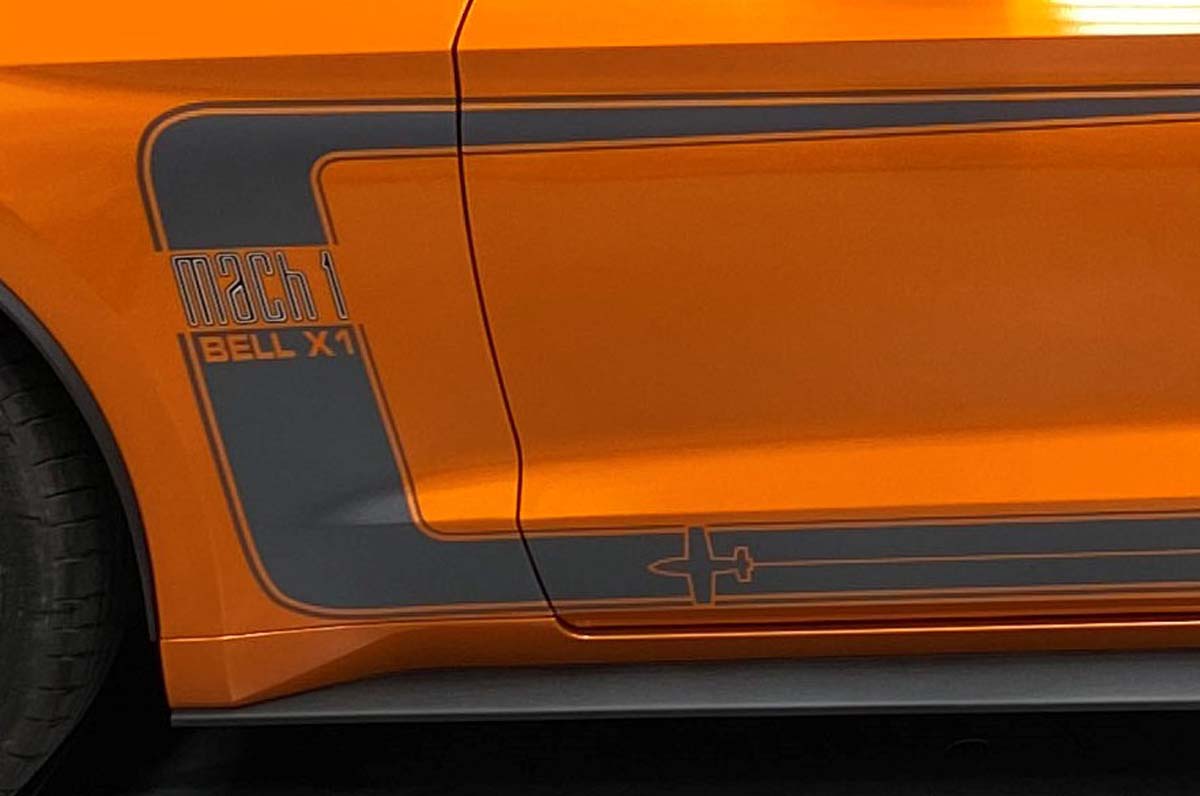 With more than 72,000 sold in the first year, the Mach 1 was an instant hit in the crowded pony car market and continued to be offered until 1978.

When the Mach 1 returned in 2003, retro-design was in full force (new Mini, New Beetle, etc.), so the new Mach 1 borrowed heavily from the original in terms of styling.

Ford only intended to offer the reborn Mach 1 for the 2003 model year, but demand saw it extended into 2004, with the planned production run almost trebled. 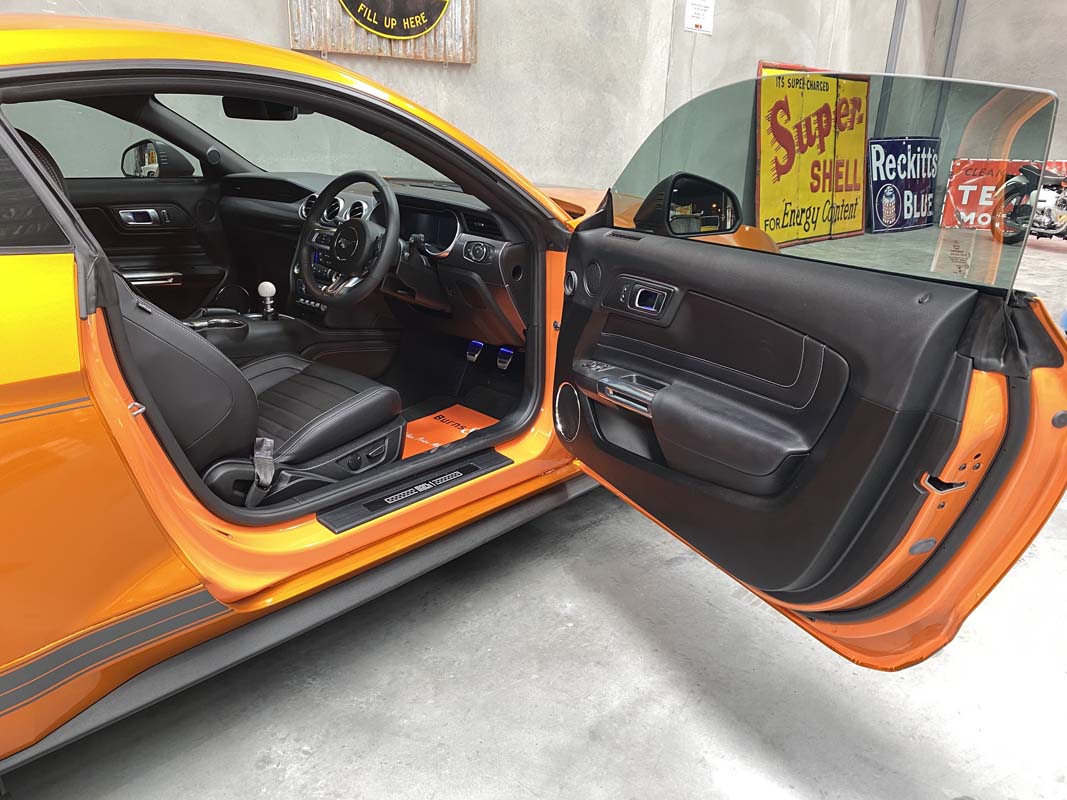 After 2004, Mach 1 fans had to wait until 2021 for the nameplate’s return, with this iteration being what the car featured is based on.

Powered by a 5.0-litre V8, matched to a Shelby-spec six-speed manual (as fitted to this car) or ten-speed automatic, the latest Mach 1 produces maximums of 345kW and 556Nm, while cosmetic elements hark back to the 1969 original, including the bonnet and bodyside striping.

But, with the Mach 1 taking its name from Chuck Yeager’s groundbreaking achievement, why not up the connection to Yeager and the Bell X-1 visually, too?

That’s exactly the approach taken by the creators of the car featured.

Even before receiving its bespoke cosmetic touches, this Mach 1 was individualised with the addition of a Handling Package that’s available in the US but not fitted to Australian-delivered Mach 1s, as well as a space saver spare wheel, jack and performance gas bonnet struts.

What’s called the ‘Bell X-1 Mustang’ was the brainchild of Mark Piper from Best Classic Customs, who worked up several 3D concept ideas for the car’s look before taking them to Matt Barnsley at The Render Garage to develop them further. 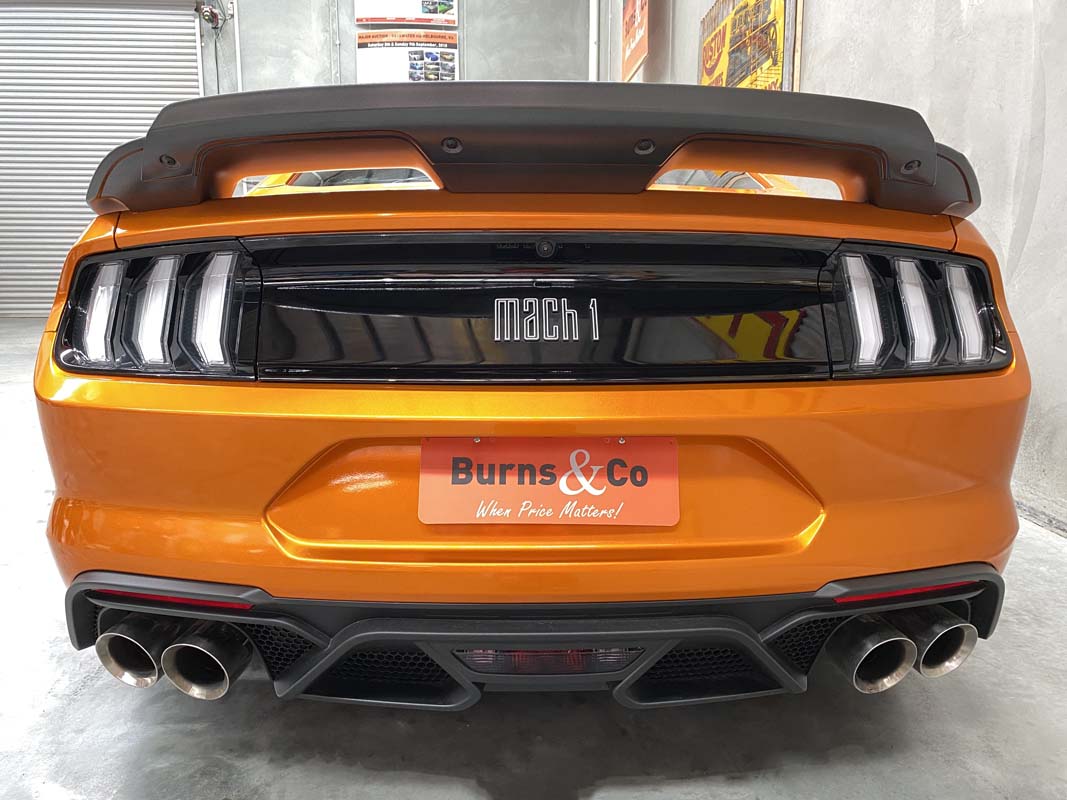 A new colour scheme was part of this development, which would be applied as a vinyl wrap, rather than a respray. The colour Mark settled on, Tangerine Dream Metallic, was inspired by the bright orange finish of the Bell X-1, and while it’s not a million miles away from the Twister Orange this car was delivered with, its metallic flake finish makes it far more eye-catching.

Once the car was stripped and prepared, Orafol’s ORACAL 970RA multi-layered PVC film was applied and the finished result looks seamless, even on close inspection. It’s only when you open the bonnet that the original colour is revealed. 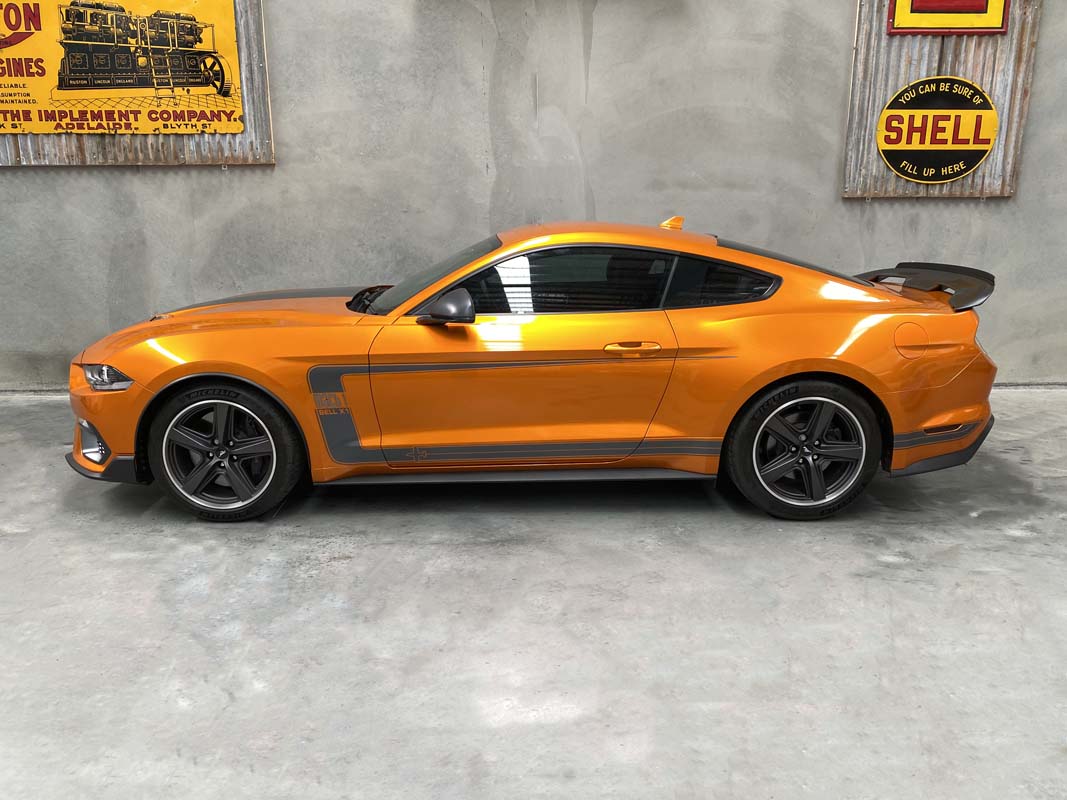 A complementary charcoal matte was selected for the decals, with their shape and positioning designed to work with the existing Mach 1 badging.

The bodyside stripes show obvious influence of the ‘C-stripe’ decals applied to the 1969 Mustang Boss 302 and carries specific references to the Bell X-1, including a silhouette of the famous supersonic aircraft, with its contrail giving a dual stripe effect, while ‘BELL X1’ text has been added below the Mach 1 badge.

For the bonnet decal, Mark went with a squarer, simpler shape than what's on the factory Mach 1 and skipped the secondary colour, too.

Other exterior features, like the wheels, mirror caps and all the badging are unchanged from the factory Mach 1. Same goes for the interior.

Obviously, a full body wrap like this is no easy task, nor is it cheap, but it’s cheaper than repainting and comes with the benefit of easy removal should tastes change or future owners want to return the car to its factory finish.

The Bell X-1 Mustang was still fresh from its transformation when it went to auction with Burns & Co. this past April. Showing only 601km on the odometer at time of consignment, the car was virtually new.

For more details on this car, along with consignments for past and upcoming Burns & Co. auctions, go to: burnsandco.hibid.com

Thanks to Burns & Co. for assistance with this article.