A STING FROM THE EAST

WORDS AND PHOTOS via Practical Motoring

They say that the South Korean car makers are at a similar stage to when the Japanese car makers went from being thought of as cheap and cheerful to some of the world’s most reputable and successful auto behemoths. It’s certainly cars like the Kia Stinger that certify that feeling.

Although the Stinger is no newcomer on the scene, this MY21 update certainly feels fresher, more contemporary, and fundamentally improved. The twin-turbo V6 engine in this Stinger PE – an all-new Product Enhancement (facelift) – is beefier, producing a mightier output and endowed with a slightly more boisterous exhaust note. It’s those touches that elevate the Stinger as an alternative to traditional muscle cars and performance saloons. But unlike, say, the Ford Mustang, Kia’s craftmanship and attention to detail oozes a stronger feeling of quality. There are no rattly, platsicy knobs and switches here. The air vents are tight and precise, and the buttons are more like the sort you’d find in something with a German badge. In fact, that begins to sum up the Stinger’s quality – it’s a staggeringly affordable sports car with pricing starting at $49,550 for the 200S (2.0T), but it reacts and feels more like a six-figure Audi A5/S5.

You can see this outside, too. At the rear and front, where there have been some updates for 2021, Kia has implanted an LED signature into the tail and headlights. At the back there are 10 LEDs inside the indicator cluster, which provides a premium, posh look, especially at night. You might even notice the glimpse of a motorsport flag here, which is the pattern used for the layout. The front headlights are equally as detailed and impressive, with dark background materials to help the daytime LEDs pop. And there’s even an LED taillight in the bootlid.

It’s all the small things that count to make big changes.

Below the bootlip is what many have been waiting for, with new large quad exhaust tips and a rear diffuser that accentuate the stance of the Stinger and the fact that there is a new performance exhaust. 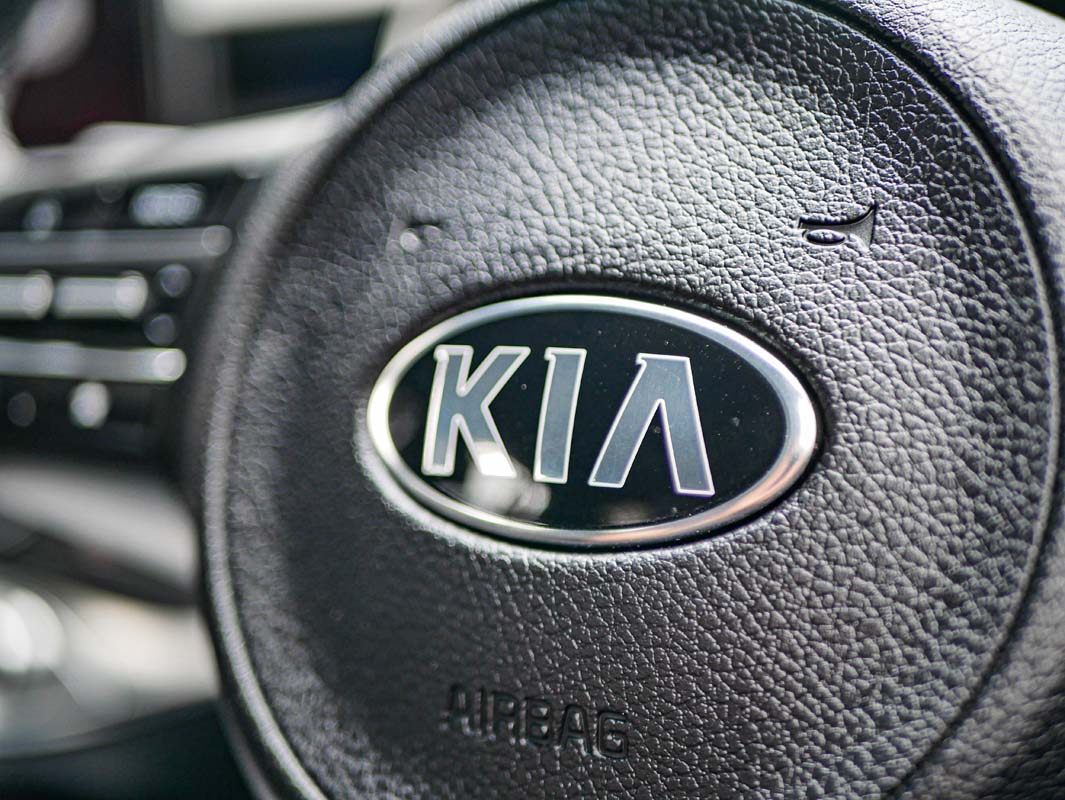 Developed exclusively by Kia and fitted to all models with a V6 (the 330S and GT) the bi-modal exhaust uses a butterfly valve which opens and closes, producing a gnarlier exhaust sound in Sport driving mode, or a quitter tone in Comfort and Eco, which is great for early morning starts when you don’t want to annoy the neighbours. 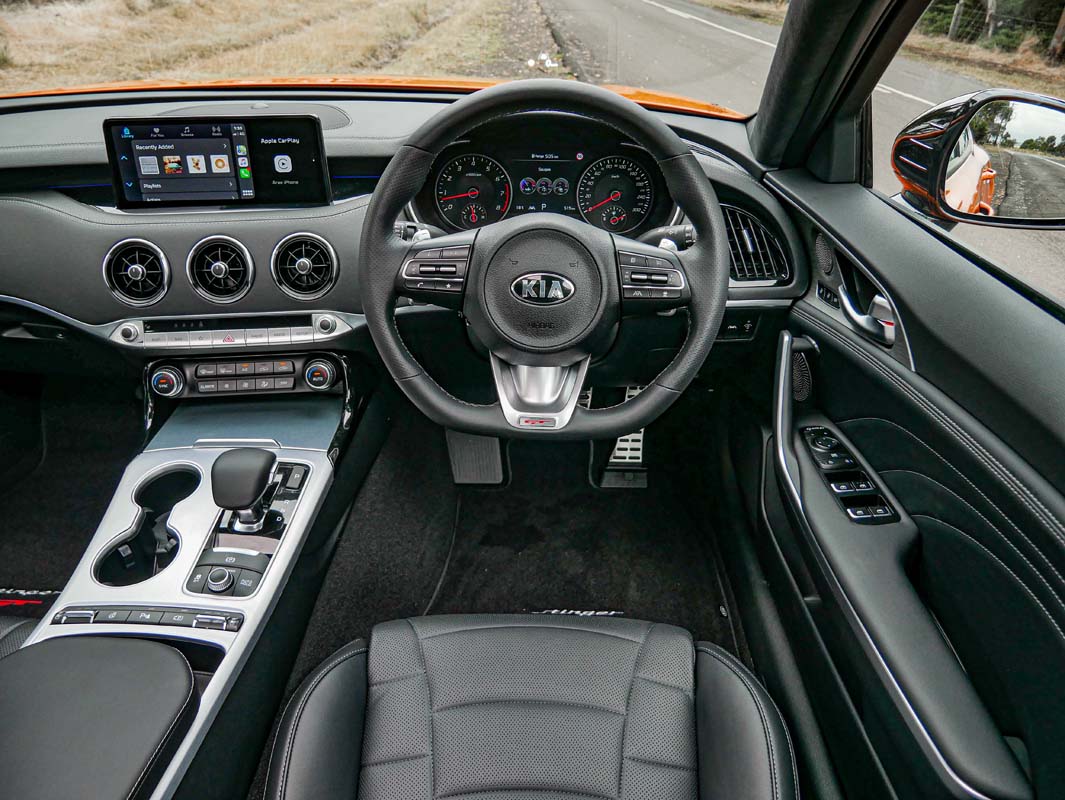 Output form the Lambda 3.3-litre T-GDi twin-turbo V6 engine has increased too. It now produces 274kW, up 2kW, and 510Nm. It attaches to an eight-speed automatic, and it has plenty of boogie.

When you plant your foot in the Stinger there’s instant zest from the V6 turbo mill and with its rear-wheel drive layout, you can have a lot of fun. For those doing track days or the like, traction control and electronic stability control can be switched off, and it will become an absolute feral on wet roads, though the precise and quick steering means drifts and sideways action are part of the Stinger’s tricks. And most of this ‘zest’ is just in the normal driving mode: flick the drive mode dial to the right for Sport mode and the driving experience becomes very focused: the seat bolsters tighten around you and the adaptive dampers firm, though they allow for enough supple response on Australian roads to keep the rear tyres tractable over bumps.

Mid-corner bump is well controlled and the car remains settled when pushing on, with a dab of the throttle enough to help pivot the rear around. It’s a seriously quick car and takes you by surprise how capable it is. 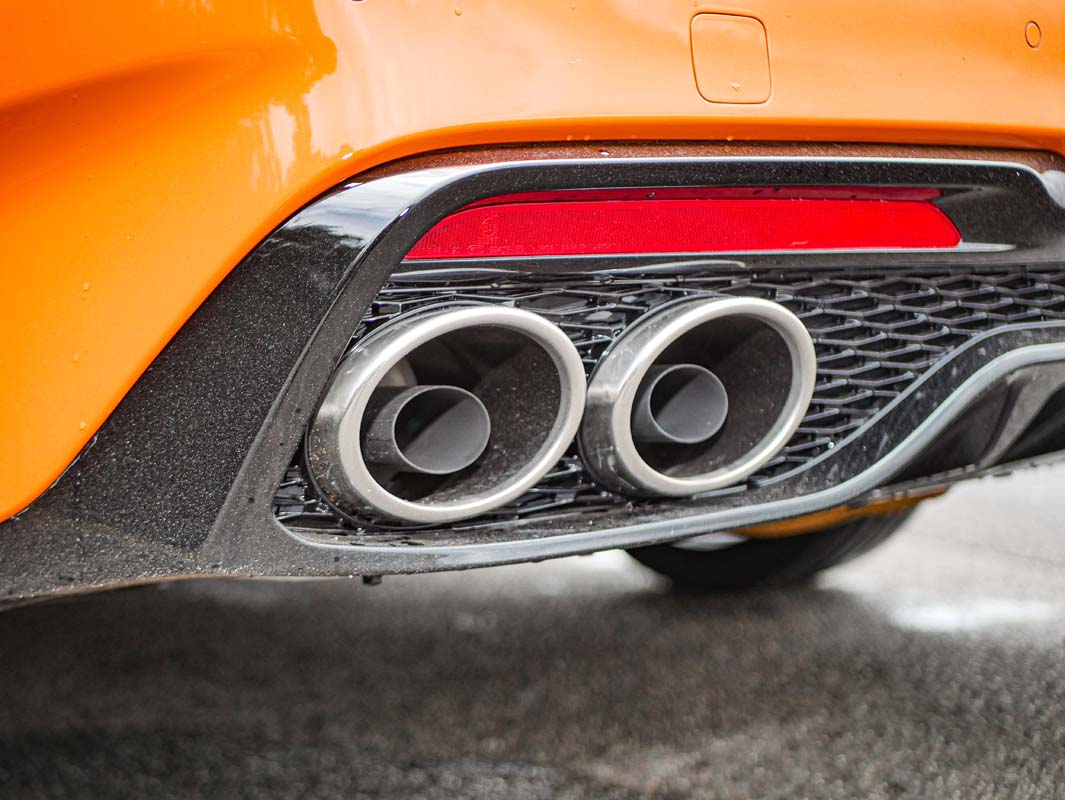 In Sport mode, the exhaust is a little meaner too, though settings can be customised. For example, you can keep the dampers in comfort mode, which are complaint despite the large 19-inch alloys underneath. Settings for steering, powertrain response and the lateral seat support can be changed as well.

Those large 19-inch alloys also feature thinner spokes, so you get a better look at the Brembo brakes underneath. Brembo brakes, which supply terrific braking force and pedal feel when you need it, are standard on all V6 Stinger models – the 200S, with its smaller 2.0-litre four-pot turbo does not have half of the good stuff on offer in this V6 Stinger, and the driving experience is that much better with the bent-six that it is worth upgrading. 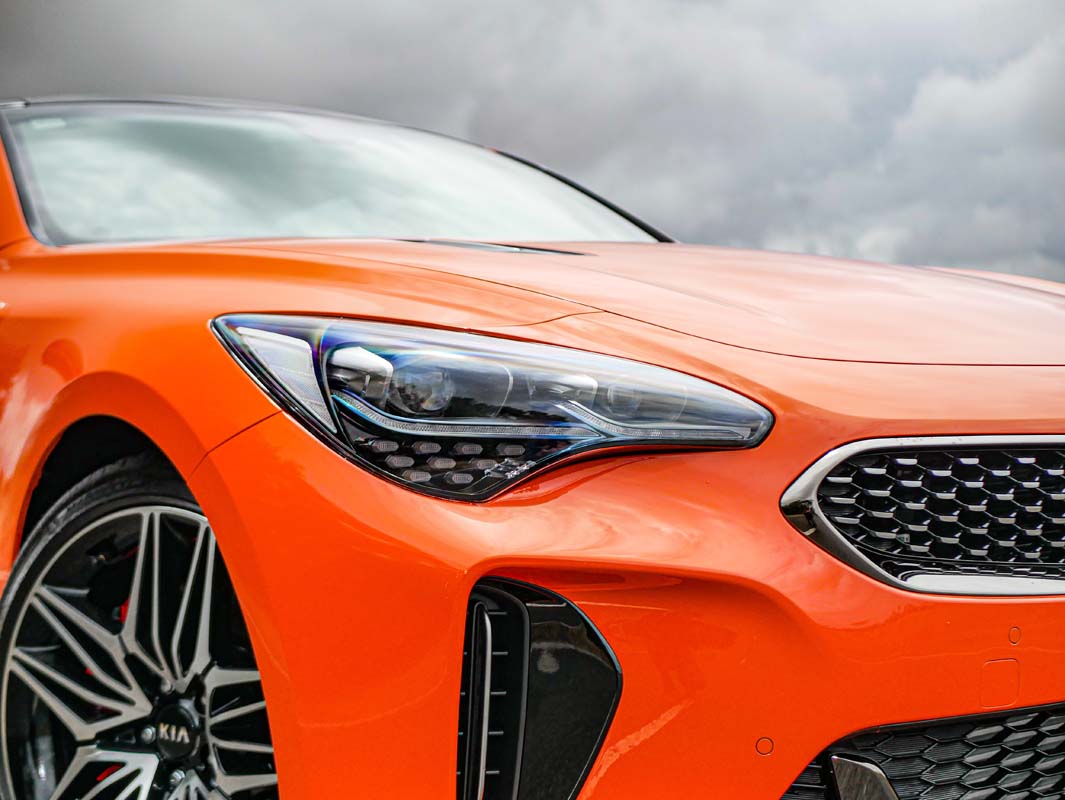 Being a four-door saloon sports car, the Stinger is also good when cruising and is designed for carrying four adults with ease. The interior is particularly roomy, and the rear seat foot well is large. But beyond pragmatic design – like the large powered tailgate boot space – the interior is finished very nicely.

For MY21, we see a spanking new 10.25-inch touchscreen display with Apple CarPlay and Android Auto. It’s wonderfully vibrant and looks good even in direct sunlight. On it, there are plenty of options, from accessing the ‘Sounds of Nature’ function to voice memos and in-built sat nav. But CarPlay and Auto look fantastic too, and it feels rather European.

Other improvements include new door panel trims with stitched leather and brushed metal elements working seamlessly together. Inside the metal cutouts are metal covers for the harman/kardon sound system offering great fidelity and punch to media. Music can be accessed via a connected smartphone, which includes the new multi-connection Bluetooth so passengers can connect an additional phone (e.g. the driver’s phone for calls, and the passenger’s phone for music).

Back up front, the driver gets to hold a new steering wheel with metal finishes and chrome bezels around the instrument cluster where there’s a 7.0-inch display. What’s great here is that when indicating, a camera view of either the left or right-side is shown – sure, you can check your mirrors, but this is a blind-spot beater.

Safety also includes AEB with pedestrian and cyclist detection plus junction turning detection, adaptive cruise control with traffic follow assist, automatic steering assist with road edge detection, rear occupant alert, blind spot detection (on top of the camera system), exit warning for passing traffic, and a smart key that can remotely start the car.  We’ll add to all of this the edgeless rear-view mirror, which beyond showing a clear view out the back window, looks rather smart.

And as before, this all goes towards a full five-star ANCAP rating.

While it sounds that the Stinger is something more of a European sports saloon from Korea than just a value-packed offering in the segment, it’s even more than that. The design is clearly a striking departure from anything it competes against, and Kia is investing into all facets of its craftsmanship – the drivetrain, the small touches to fit and finish inside and also on the safety front. It’s a shot squarely at all the muscle car competitors – from the Ford Mustang to the Subaru WRX – and it’s hitting the mark.