One of the easiest and most practical upgrades for your classic car, LED headlights can also be one of the coolest.

You’ve got a classic but want to customise it and make it more your own. Where do you start? For most people, the first step of individualisation is a set of aftermarket wheels, maybe with low-profile rubber, too. Next? Some window tinting, sports seats or a stereo upgrade. Lowered suspension and an engine tune or aftermarket exhaust are also on most to-do lists.

The deeper you go into customisation, the more expensive it can become, but there is an affordable modification that can absolutely modernise and personalise the look of your classic. It’s also practical and can be done by any DIYer. 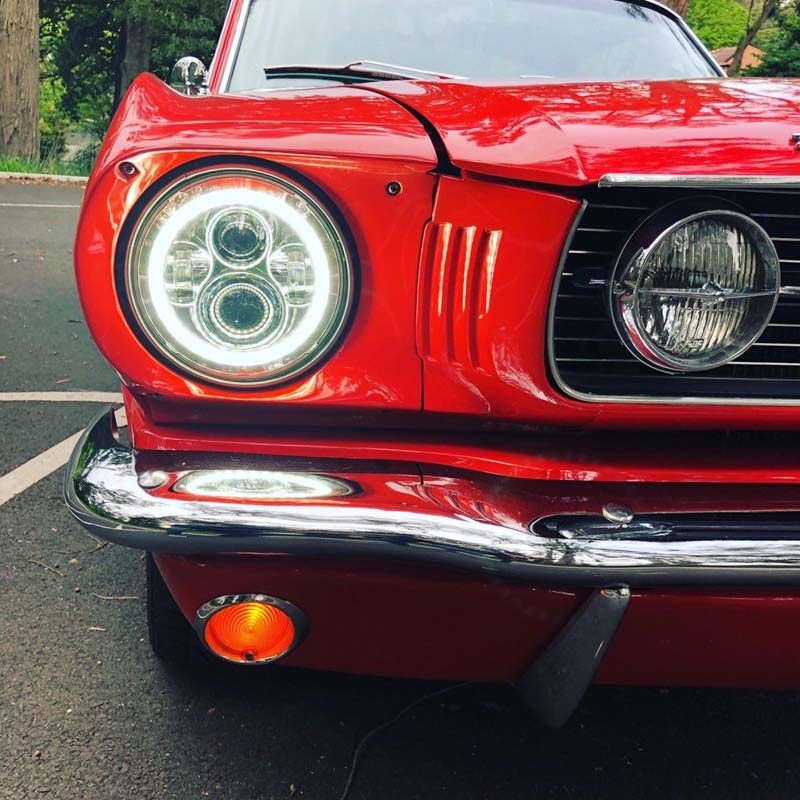 Seeing the Light
With LED lighting applied to just about every other area these days, including new cars, it’s no surprise that LEDs are now making an impact in the classic and custom car scene, as well.

Melbourne-based JTX Lighting have seen firsthand the widespread adoption of LEDs for classics and have been leading the way in offering LED headlight upgrades to Aussie enthusiasts. 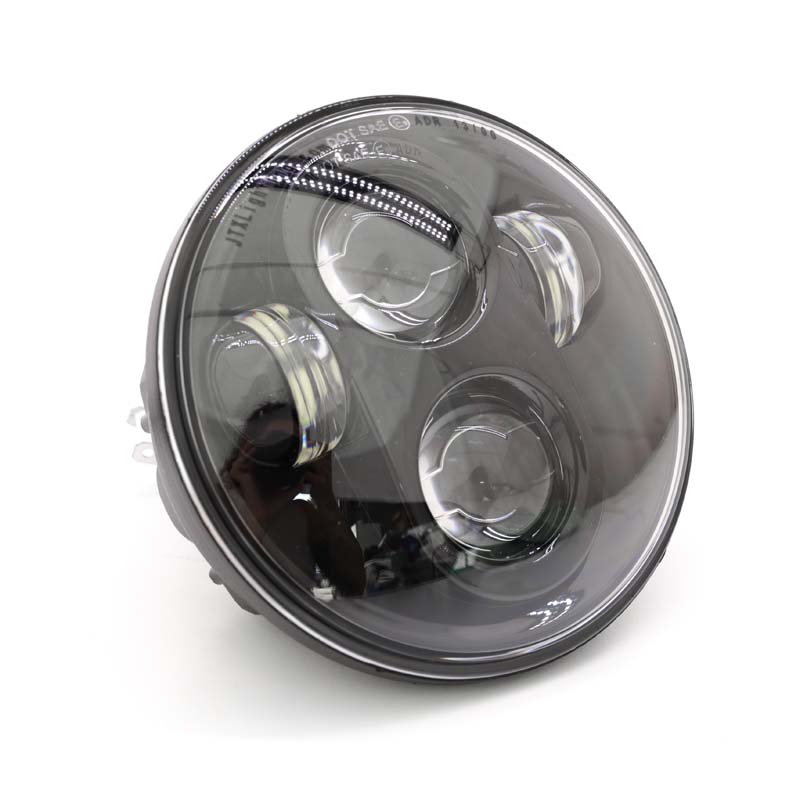 Steve Hobbs, the founder of JTX Lighting, started off supplying aftermarket accessories to the four-wheel drive market. Amongst all his product lines, replacement headlight sets proved to be popular, especially with Nissan Patrol owners upgrading their rigs for bush bashing, competition and general use.

“Importing lights by the container-load, we ended up doing less and less of the four-wheel drive accessories and more and more headlights,” Steve explains.

When sales of these lights started regularly outstripping all other lines he was offering, Steve decided to focus on lights exclusively, giving birth to JTX Lighting. As LED aftermarket lighting options started to become available, Steve took them on as well.

More recently, he’s developed his business to make it unique in Australia. 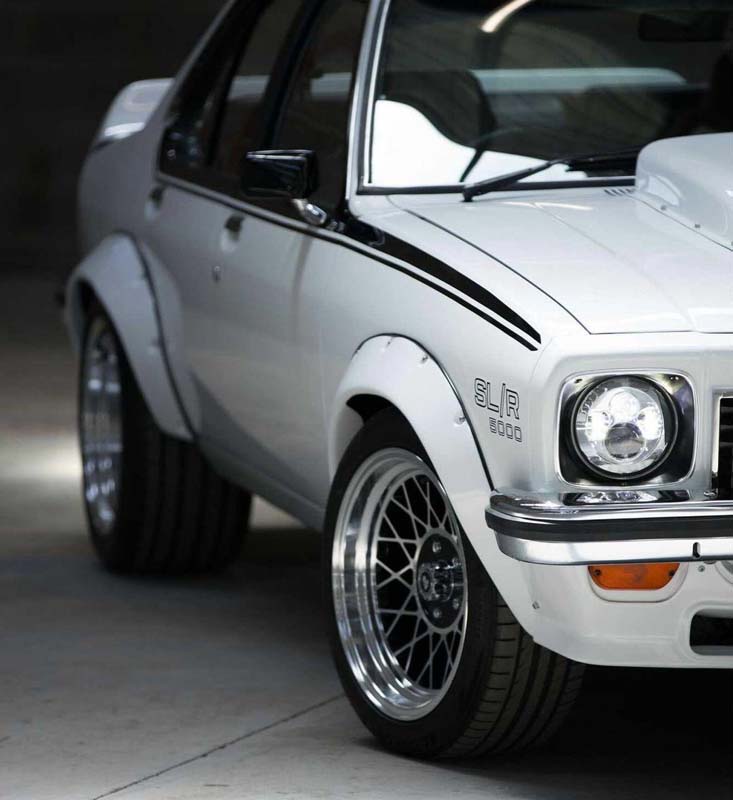 Look at the headlights of most production cars and light commercials from the immediate post-war years through to the 1980s, and you’ll most likely be looking at round units of 7-inch or 5 ¾-inch diameter.

These two sizes were standard on the vast majority of cars manufactured in Australia back then, as well as vehicles from Japan, the UK, Europe and the US. Rectangular headlights started to appear in the 1960s (Chrysler were one of the early adopters here), and by the 1980s, headlights had started to become bespoke items, as exclusive to the car as its body panels and badges.

Still, a hell of a lot of classics were produced with 7- or 5 ¾-inch lights, which meant Steve should only have to carry two lines, right? Not quite. With the advent of 'halo' DRLs for these LED lights, a vast array of options opened up, as these halos could be had in a variety of colours. There were other options in terms of reflector finish and glass tint, too. 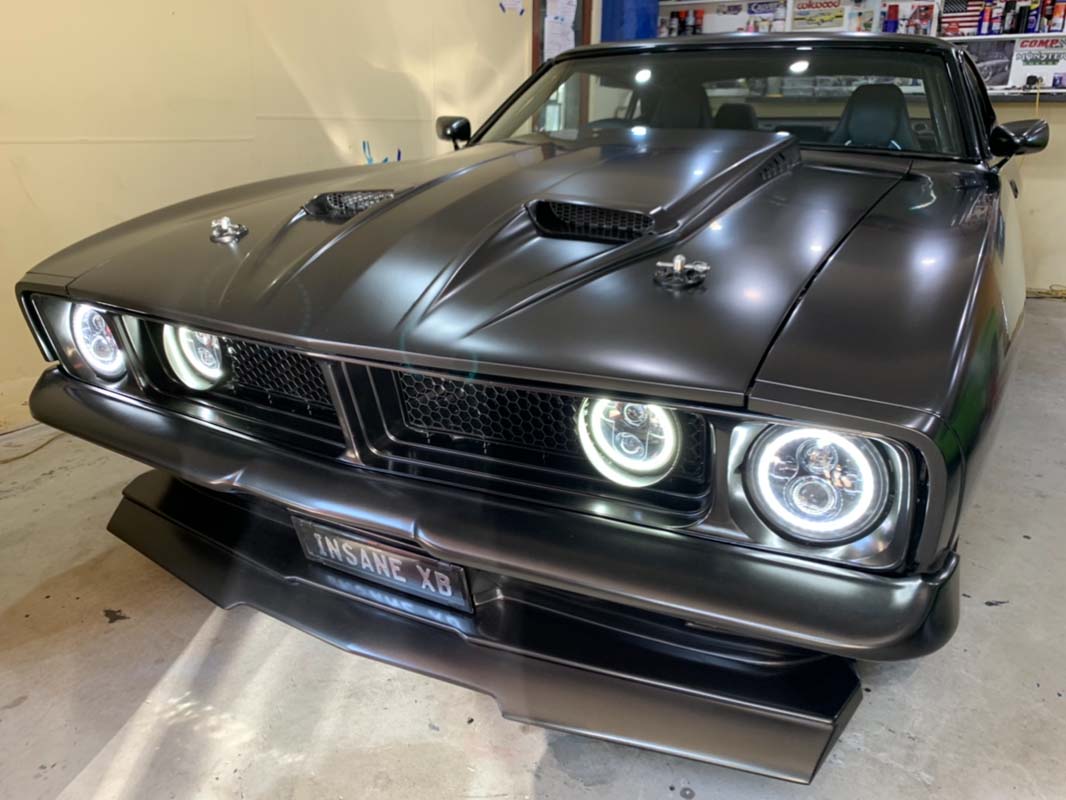 “Because there were so many choices, I found myself carrying way too much stock,” Steve recalls. “So, I put the squeeze on factories to supply parts for assembly here.”

It’s this local assembly that makes JTX Lighting unique in Australia. It means that, rather than order a complete headlight set from eBay and waiting months (especially at the moment) for it to arrive, you can phone JTX Lighting, tell them what you need – a quad 5 ¾-inch set with purple and white halos, for example – and they’ll assemble the lights and have them sent out to you within 48 hours in most cases.

“I’ve become a specialist in these lights,” Steve adds. “If someone has a warranty claim, I can rebuild a light. If someone wants something customised, I can customise it.”

That customising expertise extends to componentry like wiring and circuit boards, as well as “Australianising” the lights with a left-hand light cast, which means they meet ADR requirements. That’s something you won’t get with lights made overseas.

Steve also says that some imported units fade and tarnish quickly, so he’s helped develop greater UV stabilisation in JTX Lighting products, so they can cope with Aussie conditions. 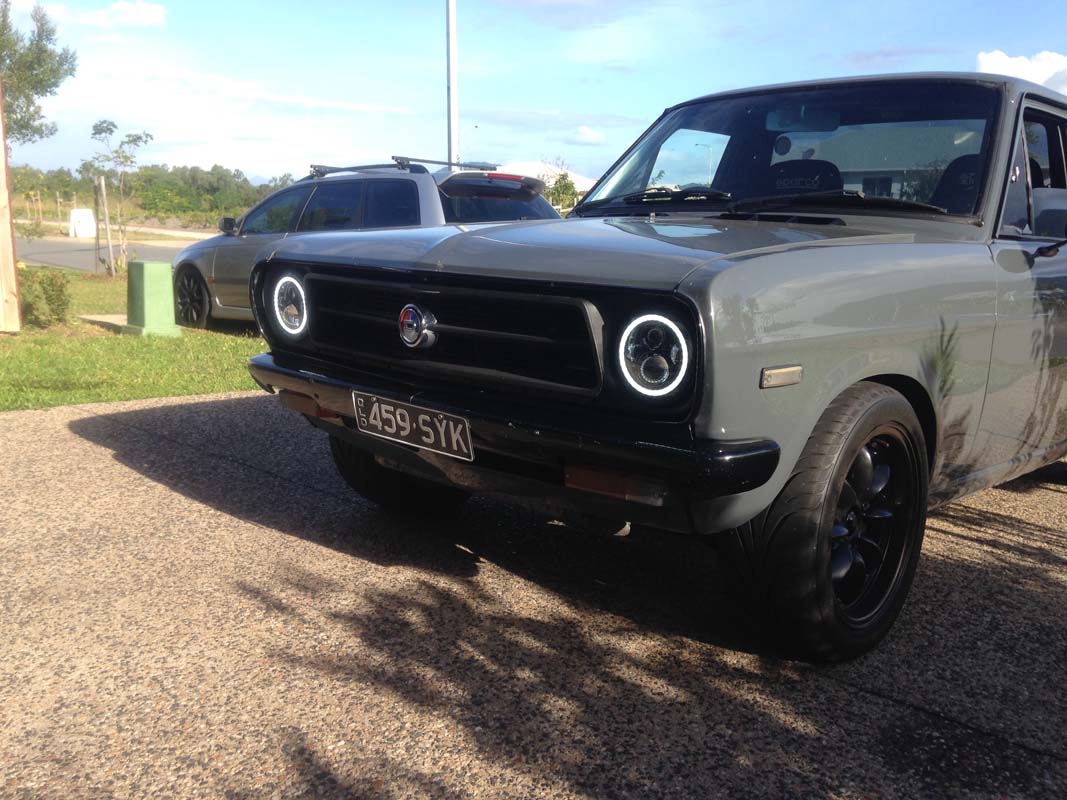 Looking at the LED headlights in 7- and 5 ¾-inch sizes that JTX Lighting offer, the obvious benefits are increased light output compared to traditional lamps, which makes for safer night driving. 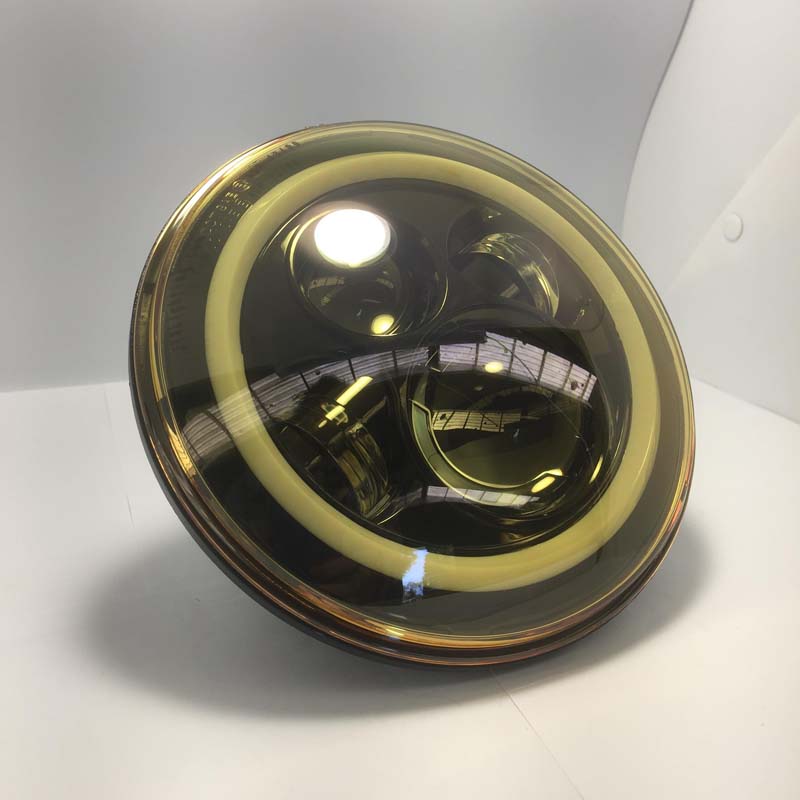 They look cool, too, while units equipped with the halo DRLs enhance the custom look even further, with the halos available in amber, blue, green, red and purple, as well as white.

All except white ­halos are illegal for street use, but you can run multiple colours in the one halo, wired up so they are activated separately. For example, you could wire the white halos into your ignition, so they come on as DRLs when you start your car, then run red halos off a switch when parked up at a car show. Amber halos can be wired up to activate with the factory indicators.

JTX’s basic LED headlights are simple plug and play units, and while the halo versions require additional wiring, it’s nothing a DIYer can’t handle. Steve says if you can install a car stereo, you can fit these lights without calling on an auto electrician.

“I’ve seen every complication when it comes to wiring headlights, so I’m quite familiar with solving problems and can support customers over the phone if they need a hand,” Steve adds. 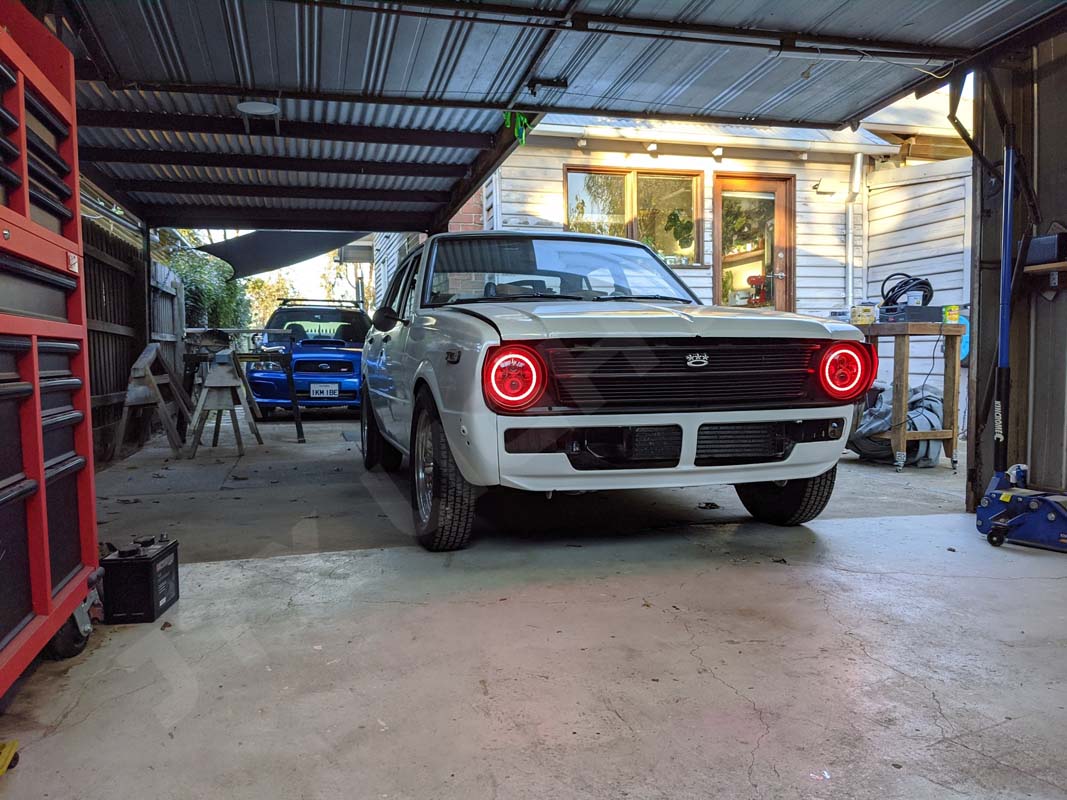 “Lights have an element of sex and sizzle – there’s a wow factor associated with great-looking lights,” Steve says. Anyone who’s seen a car equipped with JTX Lighting units, especially the halo type, would find it hard to disagree.

Look at Summernats-style Elite cars of late and you’ll most likely find they’re running JTX units. Steve says the adoption of JTX Lighting’s LEDs amongst the street machine and show car crowd is a recent phenomenon, but it’s one he’s really enjoying.

“In the last two years, we’ve been embraced by the enthusiast car market and it’s become quite enjoyable working in that space.”

Steve gets a kick out of seeing his lights in high-quality builds – the kind that cost six figures and win trophies – but says you don’t need a massive budget to apply the same show car touch to your own ride. JTX Lighting LED sets start at around $350-$400, so they’re very affordable.

The JTX touch doesn’t start and end in the show car and custom scene. Steve also supplies traditional-looking LEDs for those who want improved lighting performance without impacting the factory-spec look of their classics. Being locally assembled means that individual requests can be accommodated, too.

“At JTX Lighting, we really enjoy being part of the quality aftermarket scene and it’s nice to be making a contribution to the industry with Australian-made stuff,” Steve says.

“We enjoy being part of people’s builds, too. When a car owner tells me how much he loves our lights, it makes me feel like I’ve got the perfect job!”