Ferrari’s Icona family has a new member in the form of the Daytona SP3; a model inspired by Ferrari’s 1-2-3 finish at the 24 Hours of Daytona in 1967. 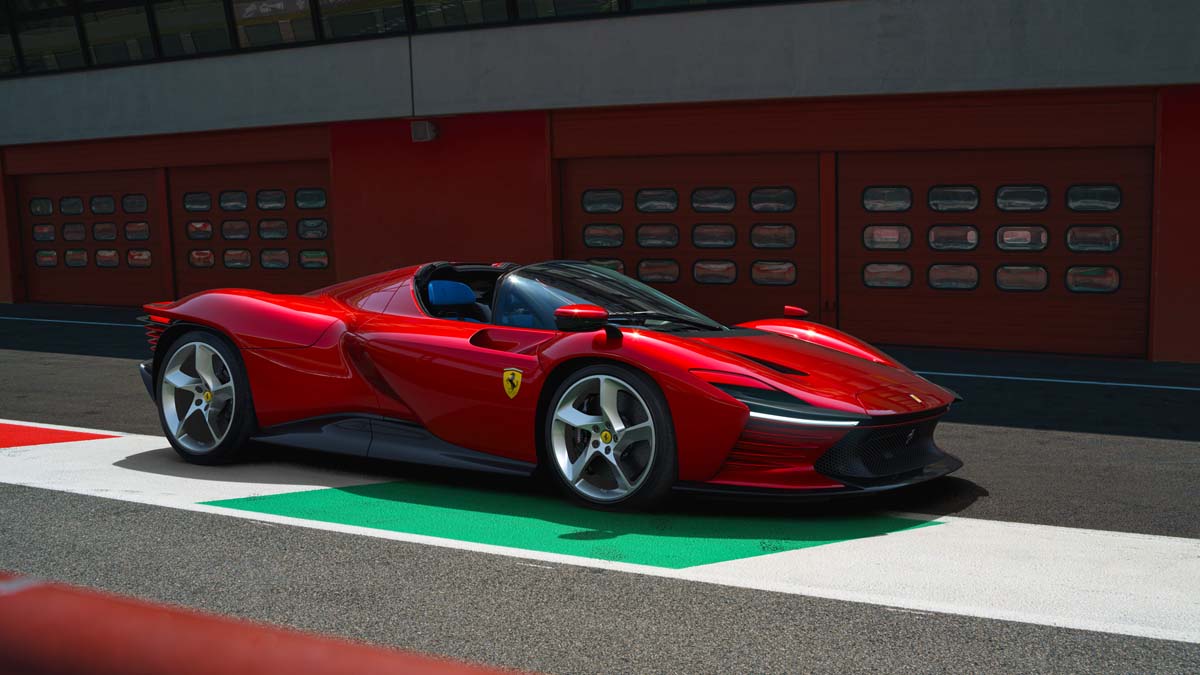 Launched in 2018 with the Monza SP1 and SP2, the Icona series take inspiration from particular periods in Ferrari history, but rather than copy the look and style of cars of the past, Ferrari instead aims to “distill the very essence of an era and use it as a springboard to create new concepts that themselves are unique enough to become icons for future generations”.

Each Icona series vehicle is also strictly limited in terms of production, with only a few hundred of the SP1 and SP2 built.

In what was the first round of that year’s International World Sports Car Championship, Ferrari locked out the podium, with a 330 P3/4 in first place, a 330 P4 second and a 412 P third.

That 1-2-3 finish has inspired the style of the new Icona creation, as well as its name – Daytona SP3.

Ferrari describe the Daytona SP3’s styling “a harmonious interplay of contrasts, sublimely sculptural, voluptuous surfaces alternating with the kind of sharper lines that revealed the burgeoning importance of aerodynamics in the design of racers”.

Created by Ferrari’s Chief Design Officer, Flavio Manzoni, and his team at the Ferrari Styling Centre, the Daytona SP3’s targa body takes inspirations from those ’67 race winners for its styling features, including a wrapround windscreen that’s similar to the 330 P3.

The high, sensuous wheelarch mouldings front and rear (contrasted by slightly squared-off wheelarch openings) are reminiscent of the 350 Can Am, while positioning the side mirrors atop the front guards is a cue taken from the 512 S.

Butterfly doors also take styling inspiration from the 512 S and have integral air boxes in their leading edge to route air to the side-mounted radiators. As well as feeding air into the engine, these doors manage airflow over the car itself, so is another reason why the mirrors are on the front guards and not the doors.

The large front grille opening is flanked by stacked horizontal blades; a treatment that’s reflected at the back, with full-width horizontal blades that dominate the rear and are functional, too, extracting air and heat for the rear/mid-mounted V12 engine. A pair of large, centrally-mounted exhaust outlets also feature prominently at the rear, placed above a bespoke diffuser.

Aft of the cabin, there are notes of the 330 P4 in the Daytona SP3’s backbone treatment and bluff tail, which includes a subtly integrated full-width spoiler that’s said to increase downforce without causing drag. Narrow tail lights wrap around the tail just under this spoiler, reflecting a similarly thin treatment for the headlights.

Honouring those Ferrari sports cars from the 1960s meant modern aero winglets and active spoilers weren’t a consideration, but the Daytona SP3 is nonetheless claimed to offer the highest level of passive aerodynamic efficiency ever.

However, the rear/mid-mounted engine layout meant the primary focus was on cooling efficiency and heat dissipation, ensuring the radiators didn’t have to be increased in size. This influenced the design all round, including those door vents, front air intakes and especially the backbone, which both funnels cool air into the engine bay and extracts hot air out.

Inside, the Daytona SP3 cites the 330 P3/4, 312 P and 350 Can-Am as inspiration. In the style of those cars, the seats are integrated into the body, so have no fore and aft movement. Their bright blue finish continues onto the doorcards, but is contrasted with a black dash; a deliberate approach that Ferrari says broadens the interior space visually by creating a break between the two areas.

With the seats being fixed, the pedals are adjustable to compensate, while the headrests are separate and four-point seatbelts are standard.

The dash is broken into two planes, with different textural finishes for each and all the Daytona SP3’s switches and controls in the lower plane. The gear shift gate is taken from the SF90 Stradale and fitted into a carbon fibre central tunnel.

Underpinning the Daytona SP3’s styling is a platform made entirely from composite materials and developed from Ferrari’s F1 programme.

Combining light weight with structural rigidity, the underlying structure includes a T800 carbon fibre body tub, while T1000 carbon fibre has been used for the doors and sills, with Kevlar in impact areas.

The result is a vehicle with a low centre of gravity (the Daytona SP3’s height is 1142mm) and dry weight of just 1485kg, with a 44 per cent / 56 per cent front/rear weight distribution.

Pirelli developed a variant of their P Zero Corsa tyre specifically for the Daytona SP3 that improves performance in low grip situations, while the Slip Side-Angle Control (SSC) had been upgraded with the addition of ‘Ferrari Dynamic Enhancer’ that improves cornering performance.

While the styling is retro inspired, the Daytona SP3’s underpinnings aren’t. The V12 engine is taken from the 812 Competizione that was revealed earlier in 2021, but where this 6.5-litre is front-mounted in the 812, it sits in a mid-rear position on the Daytona SP3.

Listed maximum outputs of 618kW and 697Nm from the heavily-modified V12 are even more than the 610kW and 692Nm produced in the 812 Competizione, with Ferrari claiming it’s the most powerful production engine they’ve ever built.

The engine is matched to an optimised 7-speed dual-clutch transmission and can propel the Daytona SP3 from 0 to 100km/h in 2.85 seconds, 0-200km/h in 7.4 seconds and a top speed in excess of 340km/h. These are all claimed to be new records for a Ferrari, too.

While Ferrari made no mention of the Daytona SP3's production numbers, nor its price, in their official release announcing the model, numerous other sources point to a production run of 599 units and a price tag in the range of 2 million Euros (AU$3.15 million approx.), with the first units to reach customers at the end of 2022.

Additionally, unconfirmed reports from overseas suggest that, despite the high price tag, all 599 units were sold soon after Ferrari revealed the Daytona SP3 in November.