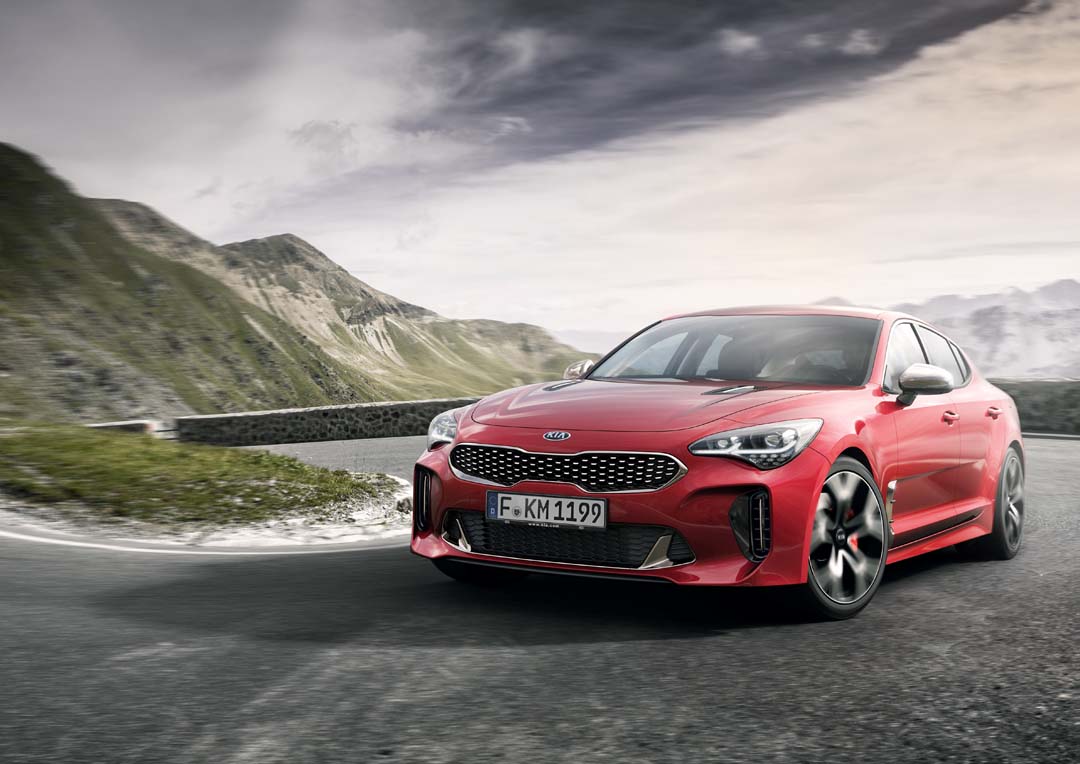 KIA HAS HAD medium-size saloons before, but they've been utterly generic and forgettable. Appliances. The Stinger is an altogether different kettle of fish.

A Frenchman, Gregory Guillaume, designed the Stinger. It derived (remarkably intact) out of a concept car he'd done for the Frankfurt show back in 2011, called the Kia GT. He had in mind a modern re-think of the high-speed European GTs of the 1970s.

Those old tourers were mostly two-door coupes, but Guillaume isn't daft: he knows four-doors hugely outsell coupes. So he made his car a four-door, but with a fastback hatch. He wanted a car that could go up against say a BMW 3-series, but look sleeker.

BMW in the meantime had the same idea, calling it the 4-series Gran Coupe. But the Stinger is actually a little longer than that, and most notably longer in the wheelbase, to get better cabin space even when everyone's sitting low and laid-back.

The design works only because it's a rear-drive car with its engine and gearbox along the centreline rather than front-drive transverse-engined. This layout gives a short front overhang and long bonnet.

What is the Kia Stinger?

The Stinger's underpinnings are related to the new Genesis G80's. Related, but heavily modified, with a completely new front suspension. Engines are two-litre four-cylinder turbo or 3.3-litre twin-turbo V6 and the transmission is an eight-speed auto.

The Stinger isn't meant to be a tyre-burning sportster but rather an enjoyable and dynamic long-distance mount. So it's meant to be refined as well and fairly agile. But guess what, our first drive location for this late-prototype test is the old Nurburgring track in Germany, a place with a cultish reputation for proving the chops of supercars. Which hardly seems appropriate. Still, it has some very road-like twists and bumps, so driven with car-testing rather than lap-times in mind, it makes sense.

This is one of the first cars to be developed under the watch of Hyundai-Kia's head of dynamics, Albert Biermann. He previously ran product development for a European outfit called BMW M. You might have heard of them; did some tidy cars as it happens.

What makes the Stinger different from your regular saloons is its proportions. It's longer but lower. This means a snug, slightly racy laid-back driving position.

The top-spec car I tested had 16-way adjustable seats. They were supportive in quick corners, but still pretty plump in upholstery. They were heated and fan-cooled too. Sat there between console and door, your legs stretched straight ahead. you do feel ready to address the road.

The car we drove was loaded with spec: heated/cooled electric seats. heated steering wheel and lots of driver aids, head-up display. Its interior was bristling with switches and knobs and rockers. It's not fashionable but it's actually pretty effective.

Far quicker to reach out and twist and real knob to warm or cool the air, than to jab through several layers of touchscreen menus. 'Glass' cockpits such as Volvo's do offer a wow factor, they're customisable and they allow extra functions to be added during the car's production life. But they can also be frustrating and distracting. We like the Kia's approach.

It puts the main infotainment screen at the dash top, a well-organised and responsive touch-screen that reacts to swipes, pinches and so on. Its graphics are clear but Korean-generic.

Brushed-chrome mode switches (phone, radio, nav, etc) sit in a row below the screen. Further down are the stereo controls and and bank of climate switchgear.

A 12V socket, USB, aux-in and Qi inductive charge plate should take care of your device needs. Phone mirroring onto the main central screen (CarPLay and Android Auto) is standard.

In between the two main dials, the instrument pack gives you the choice of several screens: audio, trip computer and so on. In sports mode there's a g-readout but if it's showing far off zero you shouldn't be looking at it.

A head-up display is in the options, showing the usual readouts of speed, speed limit (read by a camera), cruise-control data, navigation arrow, etc. It's crisp and clear.

For the people sitting behind, the low roof line has obvious repercussions for headroom. It's not crippling though. Because the wheelbase is so long, rear legroom isn't bad at all, especially if you can persuade the people in front to raise their seat cushions a smidge so you've got a slot to tuck your feet in under the front seat.

In the back, most of the amenities of a conventional premium saloon are present. Three-zone air-con is standard across the range, so people behind can control the temperature of the air streaming through a pair of eyeball vents. They get cup-holders, 12V socket and 5V USB, and a fairly rudimentary overhead light.

The boot is long front-to-back but not that deep. The Stinger's a lot more versatile than the saloons it competes against because of the hatch and folding seat. 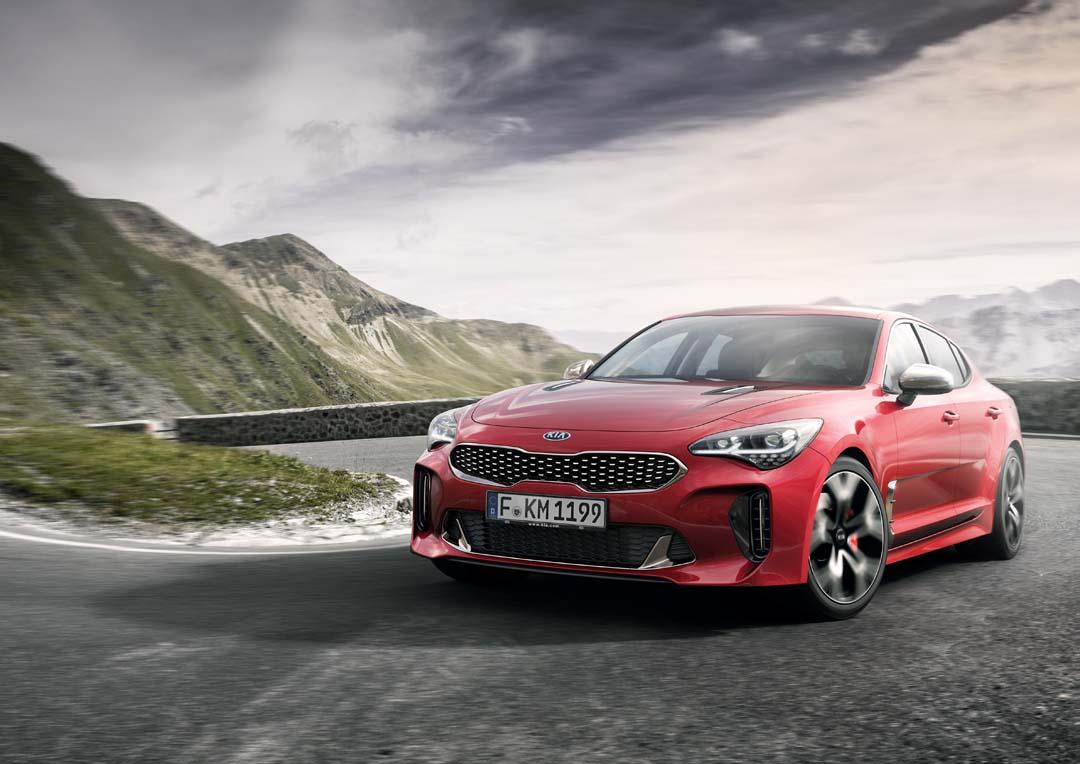 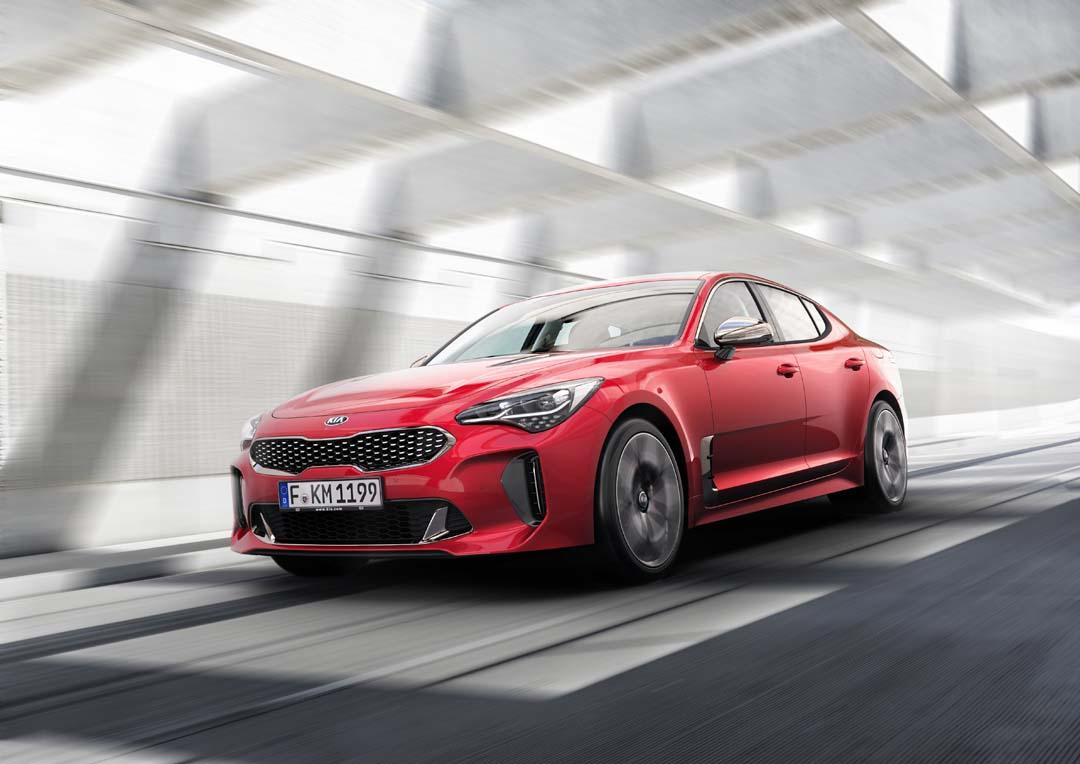 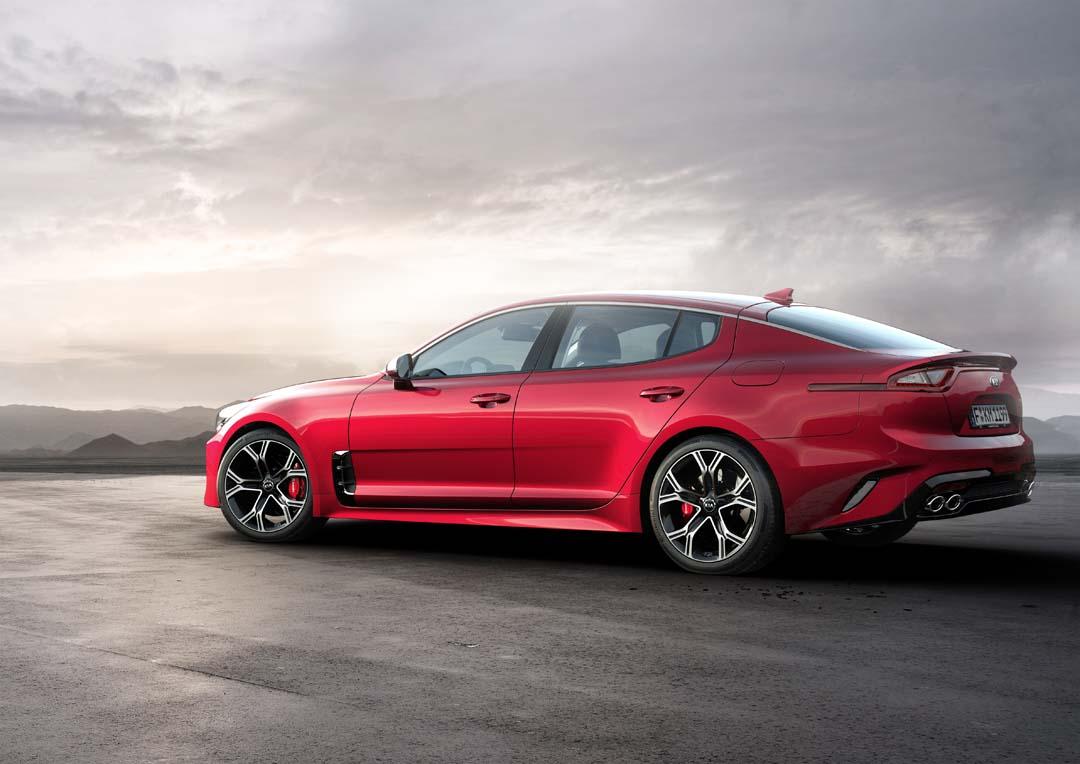 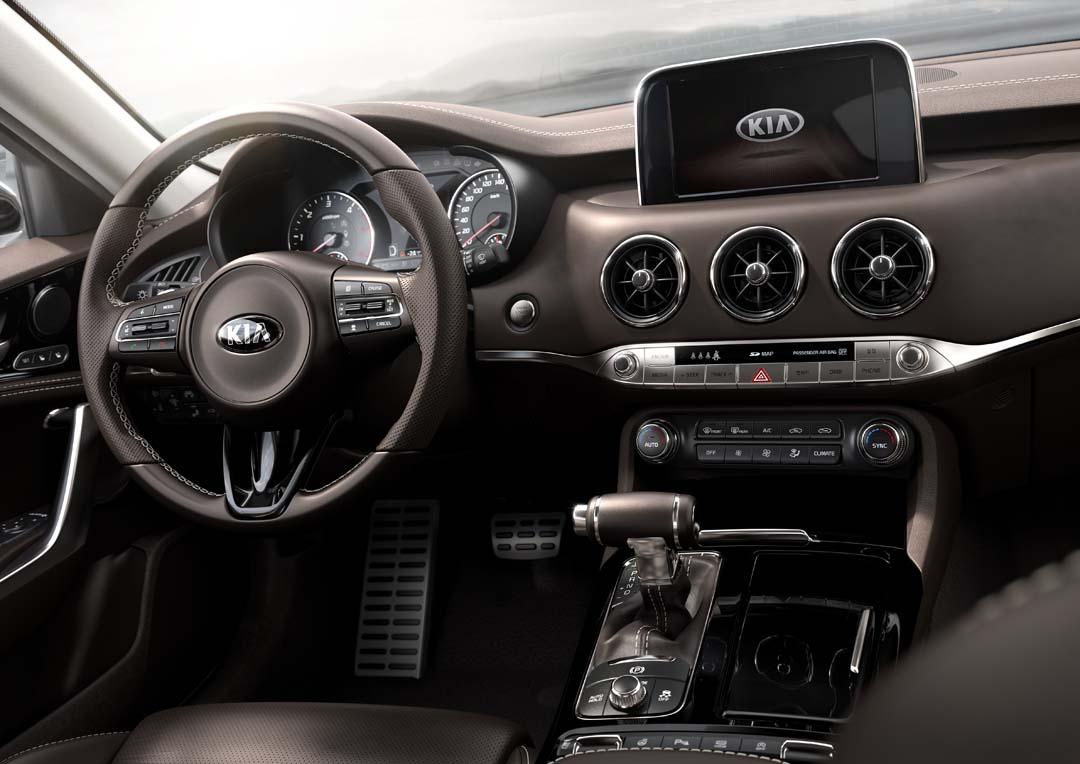 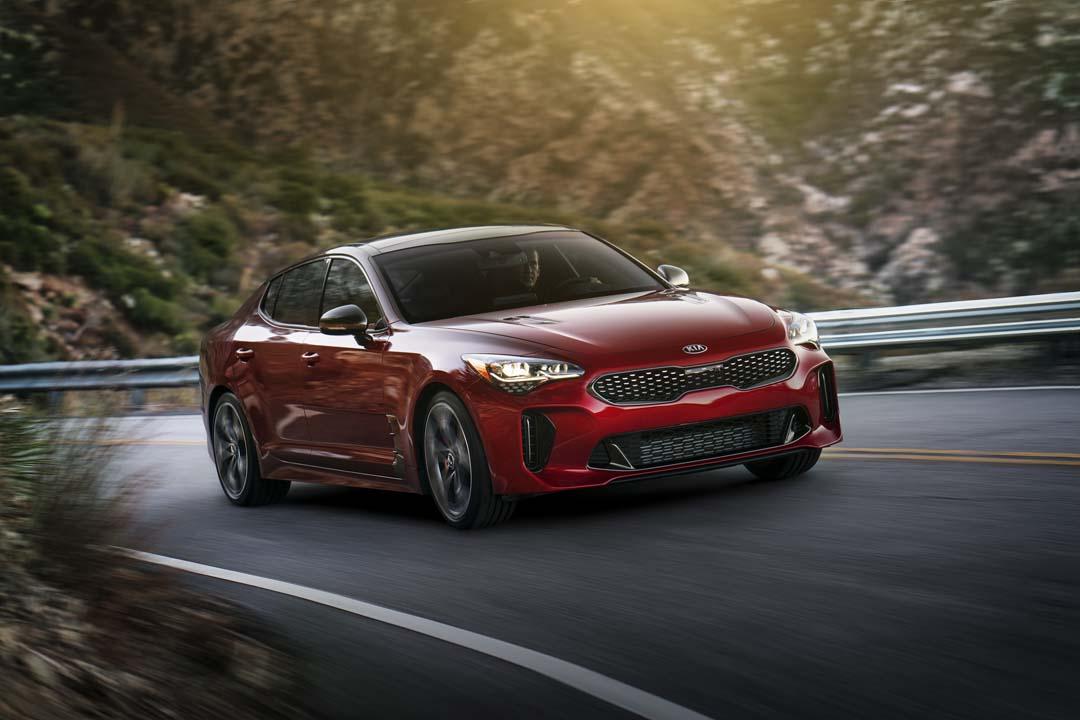 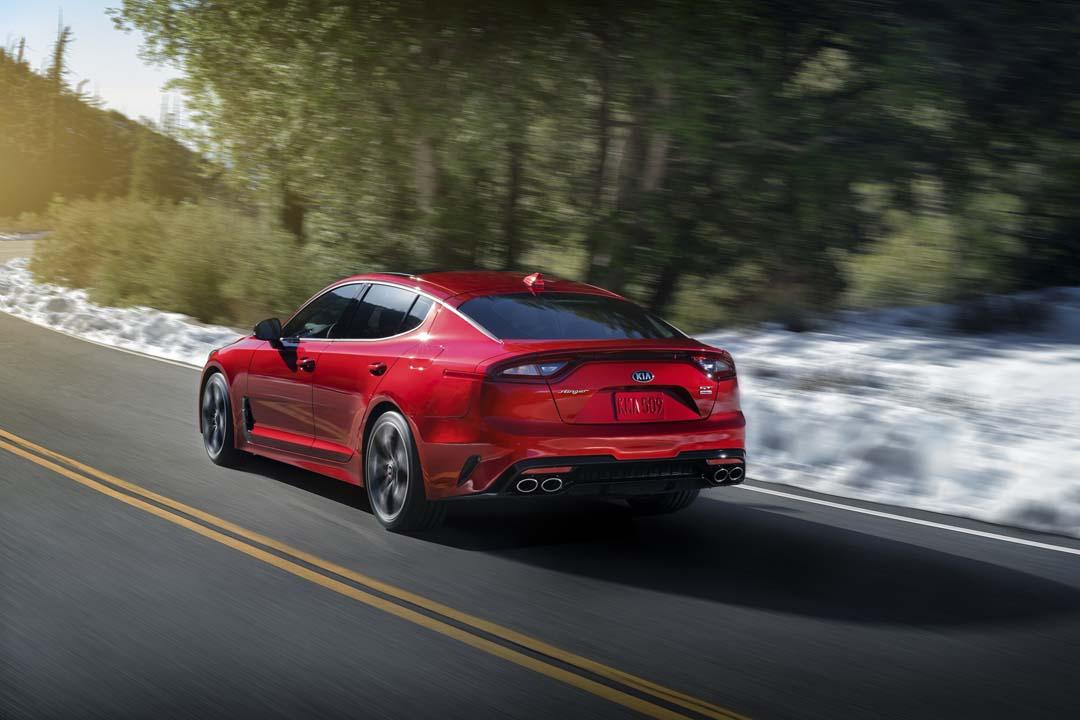 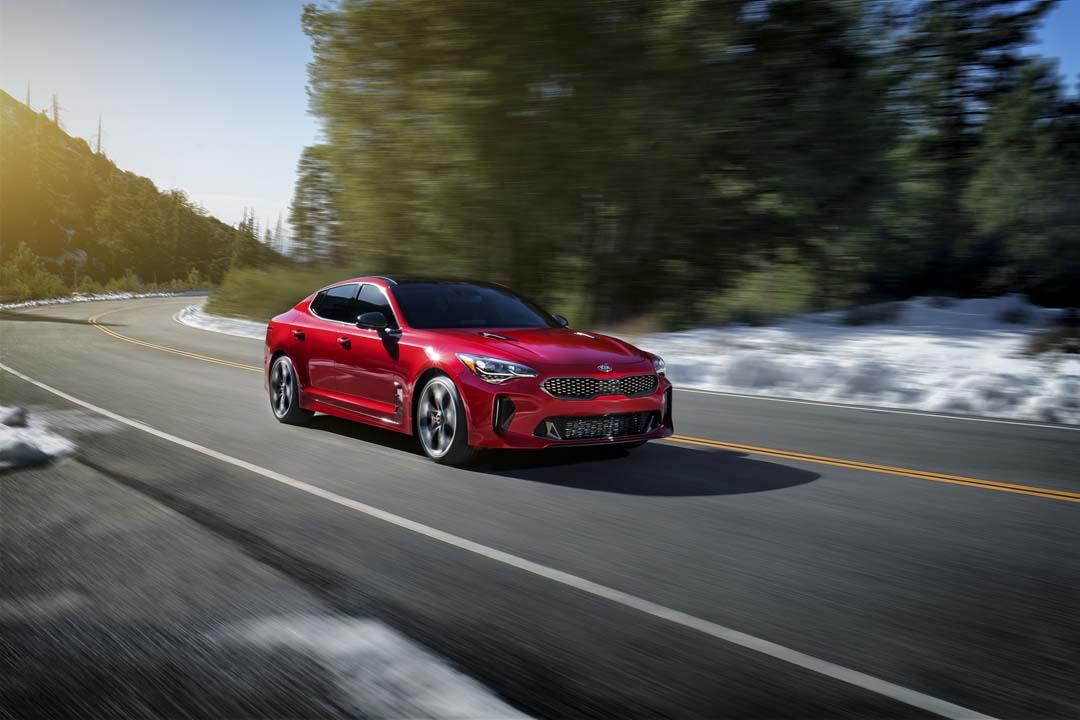 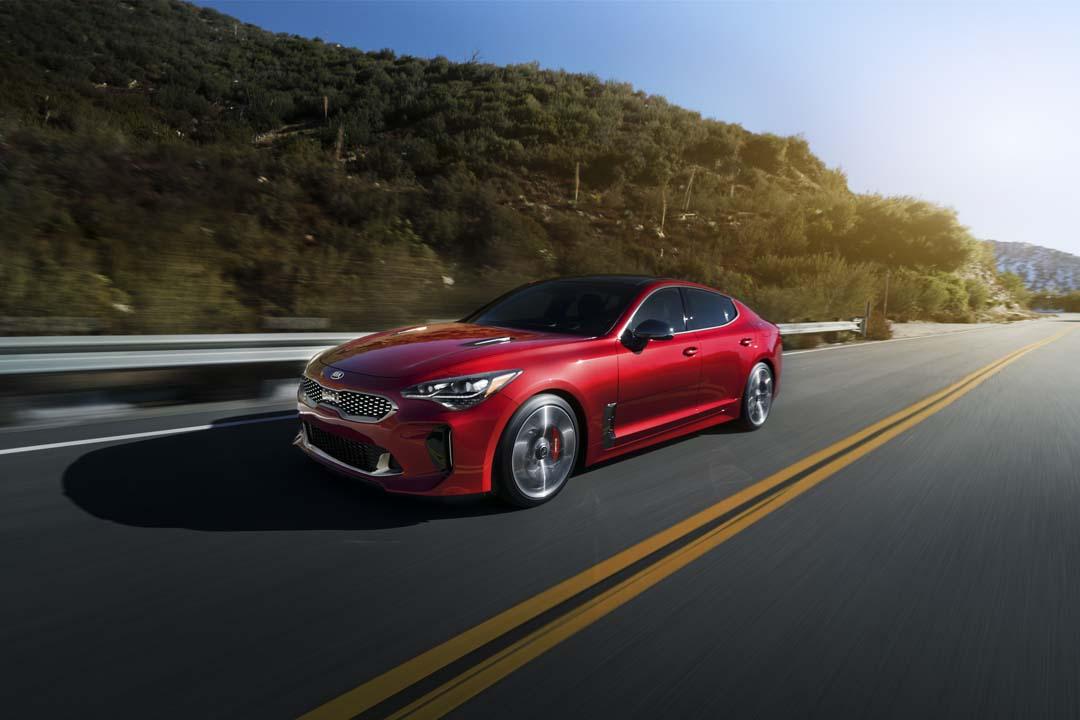 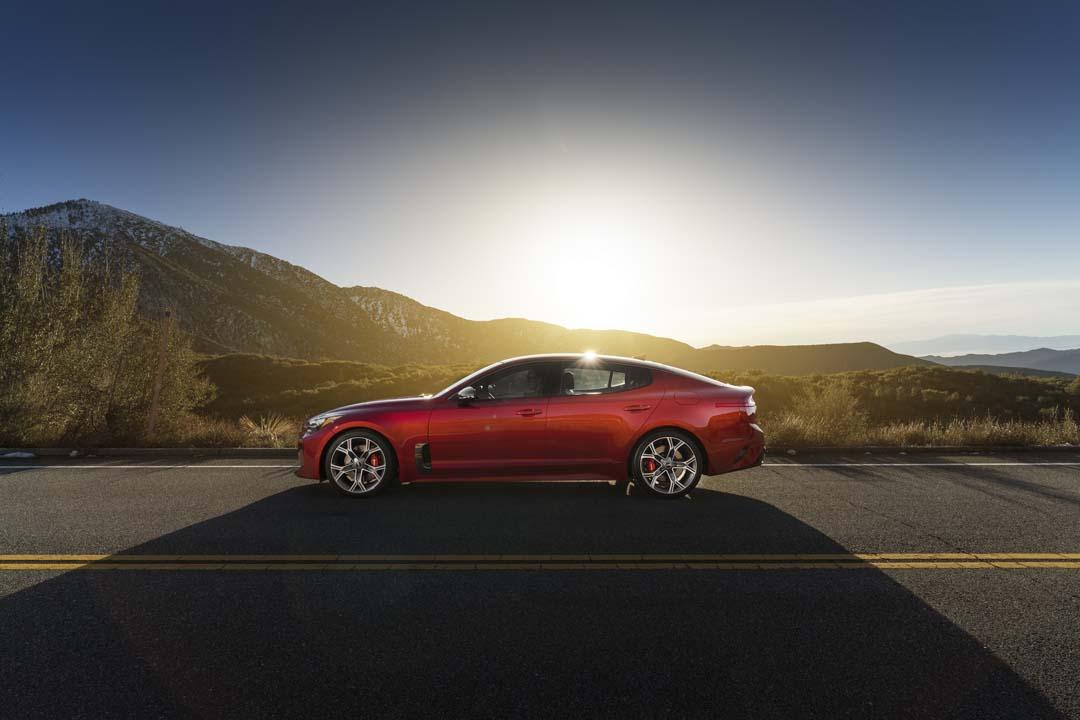 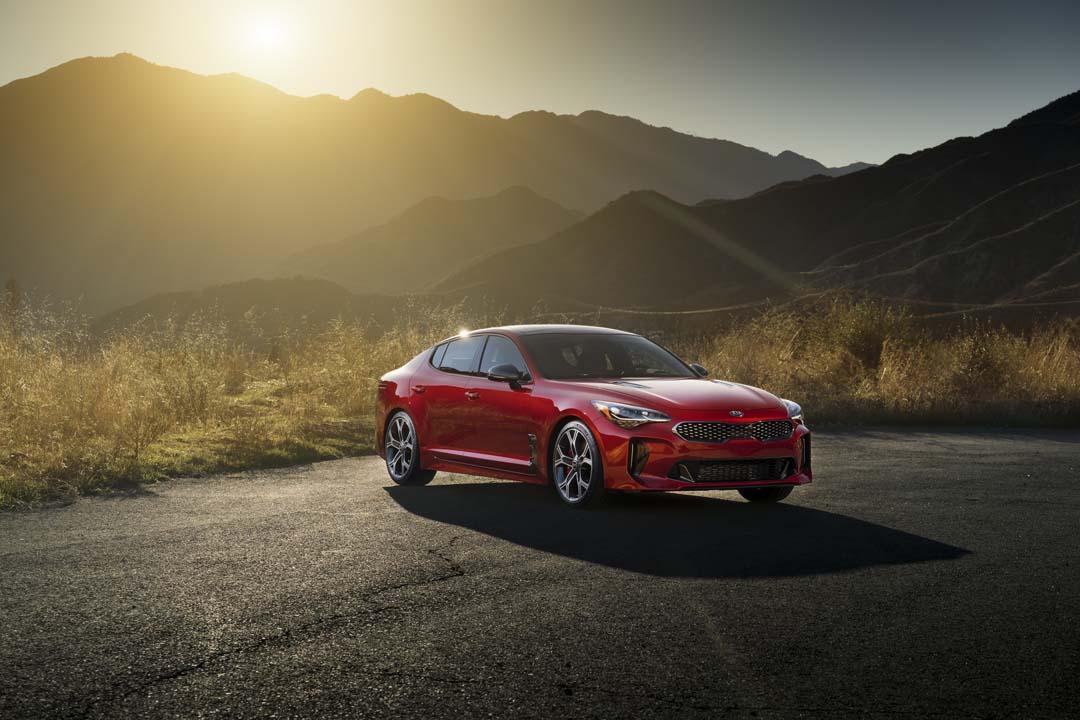 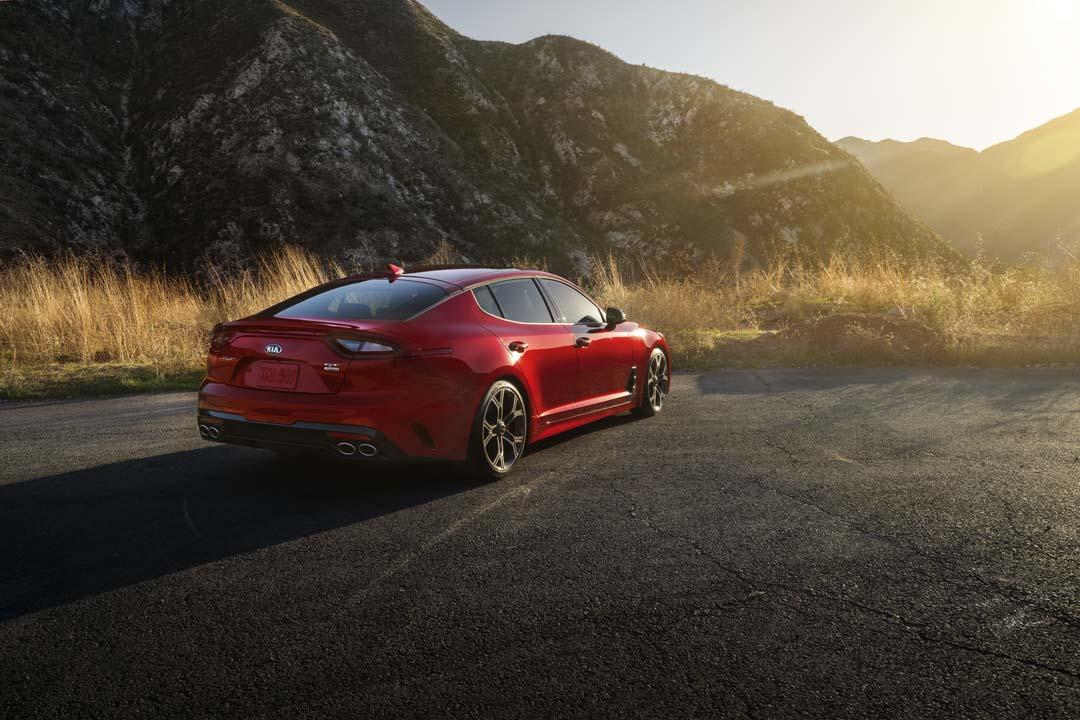 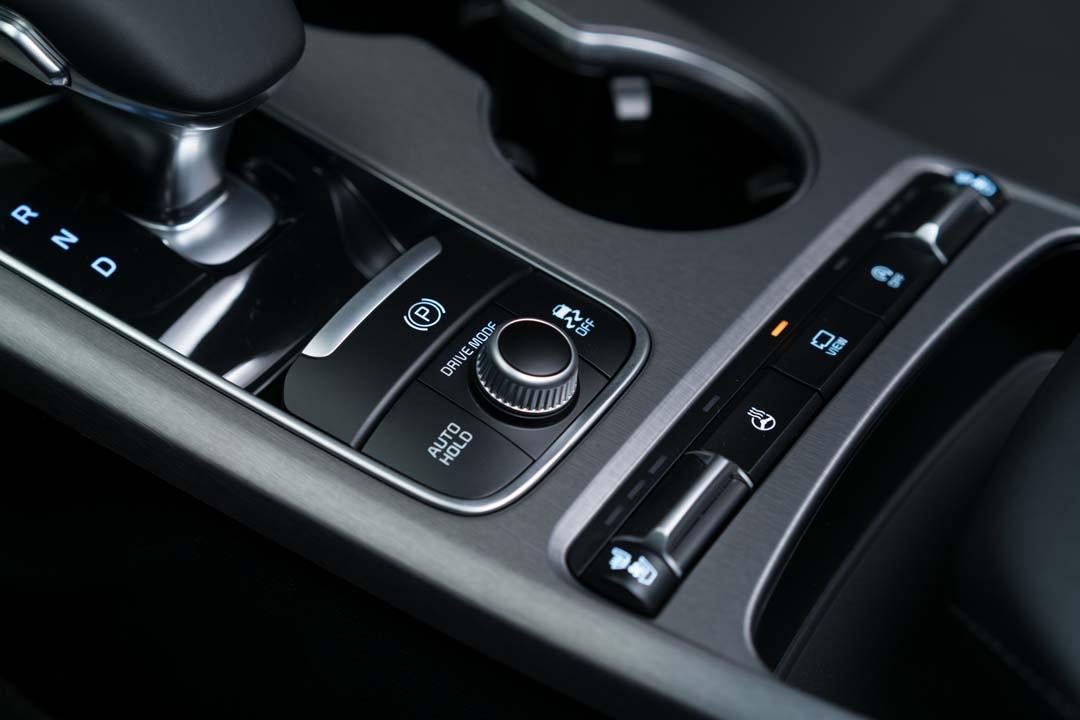 The Nurburgring is a seriously ornery track to drive on – lots of tightening blind corners, many of them over crests or dips. Jumping into any car and being told to follow a handy racing driver is intimidating. The Stinger makes it about as easy as it could have been.

The Stinger is meant to be a quick but engaging tourer. Not a track weapon that rewards brave skills but punishes mistakes.

Steering into a curve and it's obvious the suspension components work in harmony. The angle of turn builds up progressively, and the car's roll (there isn't much of that actually) is equally well damped. Go quicker, impose more force, and there's a small but reassuring degree of understeer. Give it big power out of a bend and the rear tyres gently take the strain without snapping into understeer.

Some regions of the world get an all-wheel-drive version of the Stinger rather than the rear-driven Oz version. I drove both, and in the dry our one is definitely preferable: it feels livelier, lighter, and more agile. (No all-wheel-drive for Oz because the position of the front differential is where the steering rack would be on a right-hand-drive car.)

The Stinger never feels snappy; it reacts calmly if you steer and brake at the same time, and the ESP system is nicely calibrated. Adaptive damping is standard on the V6 model, not on the 2.0-litre. Generally it works well, though in sport mode it sometimes goes into an uncomfortable pogo motion, and in comfort it'll float if you're cornering hard.

The V6 engine isn't without turbo lag but it's a stout thing – able, says Kia, to kick this biggish five-door to 100km/h in 5.1 seconds. It builds up lots of shove from 2500rpm onwards, but there is turbo lag that the auto transmission can't quite disguise, even in the sport program. There are manual gear selection paddles, but they don't fully over-ride the car: it always upshifts when you approach the red-line, and sometimes brushes off your request for a downshift too. Still, shifts are seldom anything other than silky smooth.

The Nurburgring has a long, bumpy straight. At something over 250km/h it still felt pretty stable, and the suspension wasn't punishingly harsh. It's going to be completely within itself at 101km/h on an Australian highway. There was a bunch of wind roar at 200-plus, but remember this is a prototype and the rubber door seals are often among the last thing to get fully finessed before a car goes into production.

What about the safety features?

Just as we don't yet know official fuel-economy numbers, we don't have an ANCAP rating. The Stinger is still at prototype stage. Still, we do know it has seven airbags, and a class-competitive active safety roster.

This includes forward collision warning with autonomous emergency braking that's also capable of recognising pedestrians. Active cruise control system should cut fatigue and lane keeping assist make sure you stay on the straight and narrow. Drowsiness warning monitors your steering and warns when they get erratic. Blind spot warning makes sure you don't steer into the next lane when someone's there.

Rear cross-traffic alert is for reversing out of a side road. Surround view cameras help when manoeuvring. A head-up display ought to keep your eyes on the road when you're on the go. So does the logical layout of most of the minor controls.

So, what do we think of the Kia Stinger?

Australia won’t get the all-wheel drive Stinger and we reckon that’s just fine as the rear-drive version is both lively and sure-footed and shows just how far Kia’s ‘sport’ engineering has come in such a short time. The interior is comfortable and the specification level should be very high when it arrives here later this year. There’s plenty of room in the back, although headroom isn’t overly generous due to the sloping roof. More detail will emerge when we come to drive the Stinger on the road but right now it's clear Kia has, first time out of the box, built a car that certainly won't get laughed at by a BMW 4-series.