The year was 1901 and the automobile was a novelty for the very wealthy. Horses still provided the power for most local travel, steam trains for longer distances. Henry Ford was 38 years old and his first manufacturing venture, the Detroit Automobile Company had closed the previous year, selling less than 20 vehicles. Ford wanted to make a better one, but his stockholders gave up and dissolved the company. But for a quirk of history, a large slice of luck, and a steely determination, the name Henry Ford may have disappeared into obscurity.

Henry Ford had a vision for the automobile that few others shared. He saw the automobile as mass produced, inexpensive and a reliable mode of transportation. In the aftermath of the Detroit Automobile Company Ford was starting over again. He needed financial backing and had to convince potential investors he had good, sound ideas, and could build cars that would be a commercial success. With more than 50 US auto companies vying for investor capital, Ford needed to do something out of the ordinary to attract backing.

Auto racing generated intense public interest, and Ford saw it as the means to promote his name and reputation. With a small team Ford built the car they called "Sweepstakes". Sweepstakes was a massive gamble. Fame, as well as significant prize money could be won, but only if the car proved to be a winner.

Construction of Sweepstakes started in May, 1901 in a shop in Amsterdam Street in Detroit. Working with Henry Ford was Otto Barthel, the overall project engineer and Ed Huff, who was responsible for the electrical and ignition systems, and was also Ford's riding mechanic. They were assisted by Ed Verlinden, a lathe operator, Charlie Mitchell, a blacksmith, and George Wettrick, a lathe hand and engine assembler.

It is now part of automotive folklore that Sweepstakes carried Henry Ford to victory in the first and only race he ever drove -- a 10-lap race against Alexander Winton on October 10, 1901, in Grosse Pointe, Michigan.

Ford was clearly the underdog against an established racer. Racing proved the worth of a builder's engineering talent by demonstrating the speed and reliability of the product. There was a lot to prove, because the infant auto industry of 1901 was bursting at the seams with ideas, experiments and innovations. The win saw a number of backers come forward and the Ford Motor Company was established in June, 1903.

Replicating the original Sweepstakes
In March 1902 Ford sold the Sweepstakes to William C. Rands for approximately $2000. Rands went on to be a successful aftermarket supplier, and he offered the car back to Henry Ford sometime in the early 1930s. It had been stored in a warehouse for many years and the wooden frame had been destroyed by fire. Ford had new bodywork made to restore the car, although promotional photos taken in the 1930s show that the result was not an exact replica of the original. After this point the car was stored at the Henry Ford Museum and over time, all but forgotten. As the anniversary of the 1901 race approached steps were taken to verify the car's authenticity. Restoration of the original Sweepstakes, along with the building of two working replicas, commenced.

Development engineer Glenn Miller at Ford Special Vehicle Engineering, and Malcolm Collum, senior conservator of the Ford Museum, located the Sweepstakes which had gone missing in 1987. They confirmed it as the 1901 original using photos, records and an examination of the engine, chassis and induction system. Work started on the cars on January 2001.

"There were no patterns or blueprints to work with," said Miller.

A dedicated team of more than two dozen craftsmen worked 12 hour days, six days a week, to complete the first replica on May 24th.

There were many challenges, especially in duplicating the original tyres.

"They basically looked like doughnuts, with the tube being the tyre. Actually, bolts embedded in the rubber held the tyres onto the wheel rim."

This was just one of many challenges that the team overcame to meticulously build exact replicas. The results are amazingly faithful.

The Sweepstakes replica visited Australia in 2001 and the author was one of a lucky few that enjoyed a ride in this special car. The cars frame is made of ash wood reinforced with steel plates suspended on its front and rear axles by leaf springs. The 29-inch diameter wire spoke wheels are fitted with 4-inch diameter tyres. The 8.8-litre, horizontally opposed flat 2-cylinder engine is mounted in the middle of the car on the left side, under the seat. It has two cylinders, with the crankshaft aligned transversely across the chassis. The cast steel connecting rods reflect steam power technology, with brass crank bearings as separate pieces bolted to the ends of the rods. The cooling system holds 35-litres of water, circulated by a pump located on the outboard side of the engine. A chain drives the pump from a gear on the end of the crankshaft.

There is a massive 609mm diameter cast iron flywheel, and a 2 speed planetary transmission. Just riding on the Sweepstakes was an exhilarating experience with plenty of steam, oil leaks and rough riding suspension. Cornering felt insecure, although straight line speed was quite impressive. Officially the original Sweepstakes recorded a test speed of 116km/h.

Operating the Sweepstakes was a complicated affair, requiring synchronisation of steering, the throttle lever, the reverse gear pedal, gearshift lever and the brake lever. The riding mechanic counter balanced the car in turns, and also operated the controls for spark advance, the ignition on/off switch and the oiling system if necessary.

The Sweepstakes is no ordinary car and it is fair to say that without it, there may well have been no Ford Motor Company. 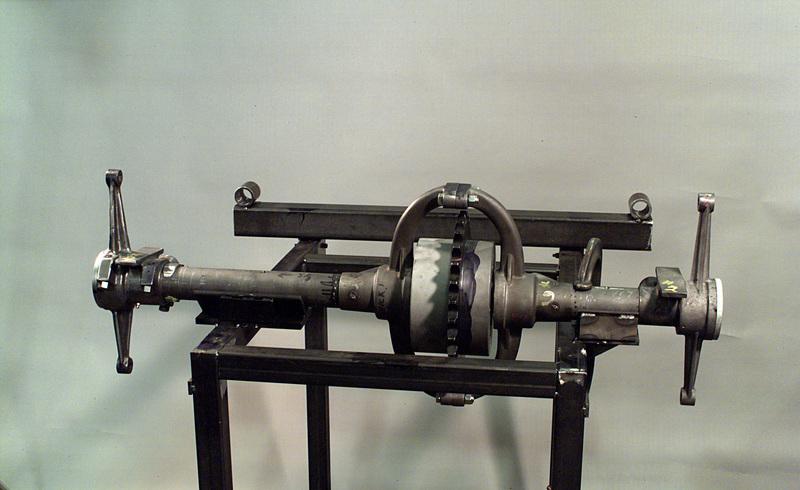 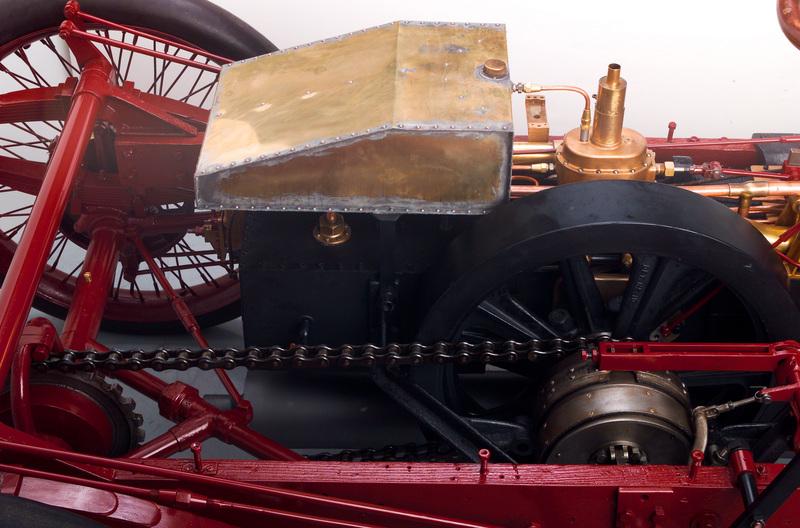 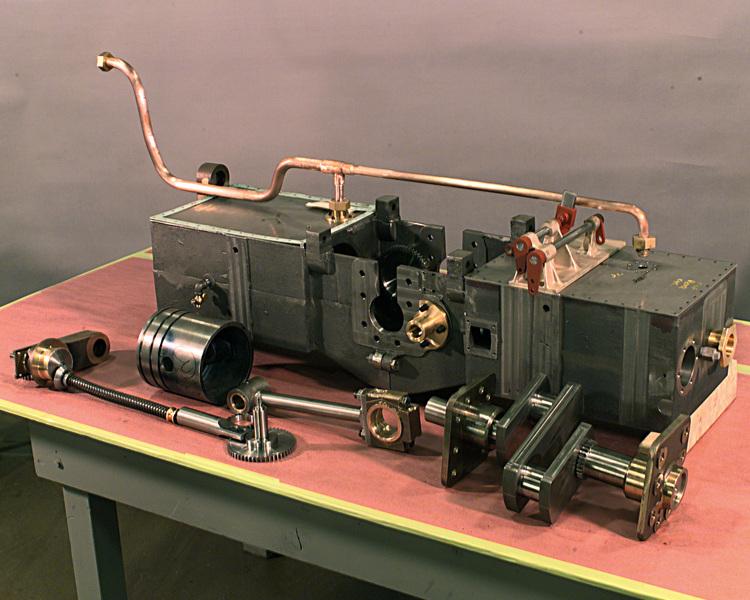 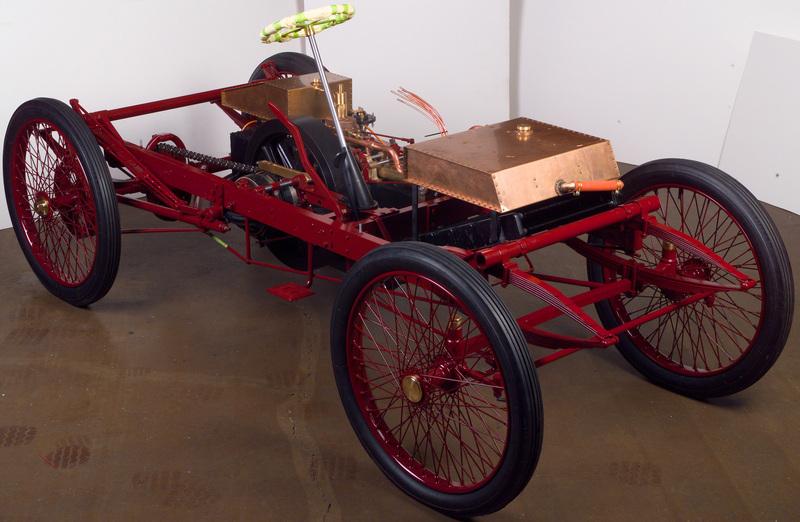 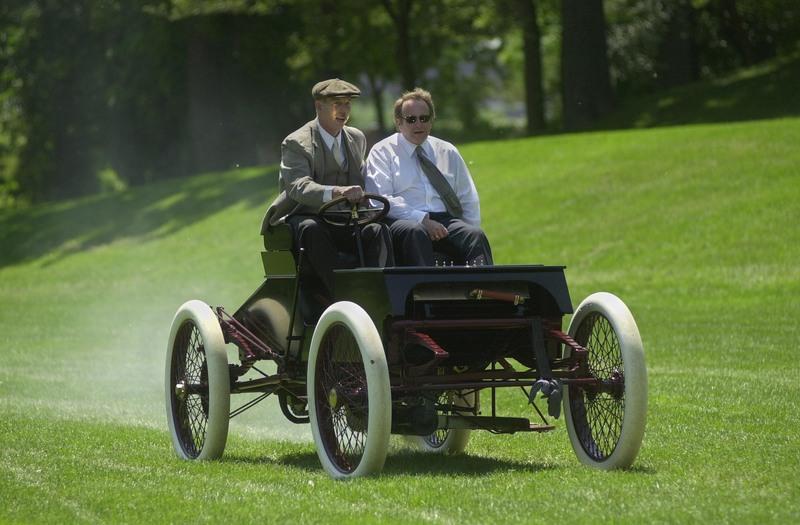 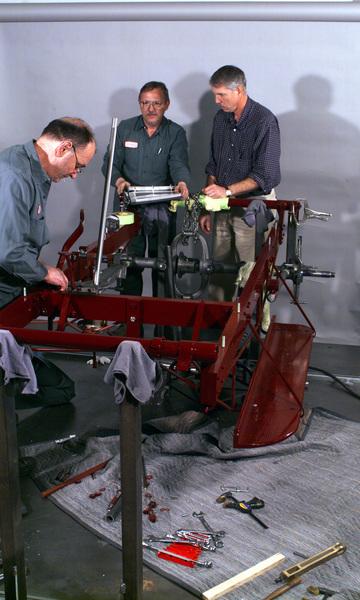 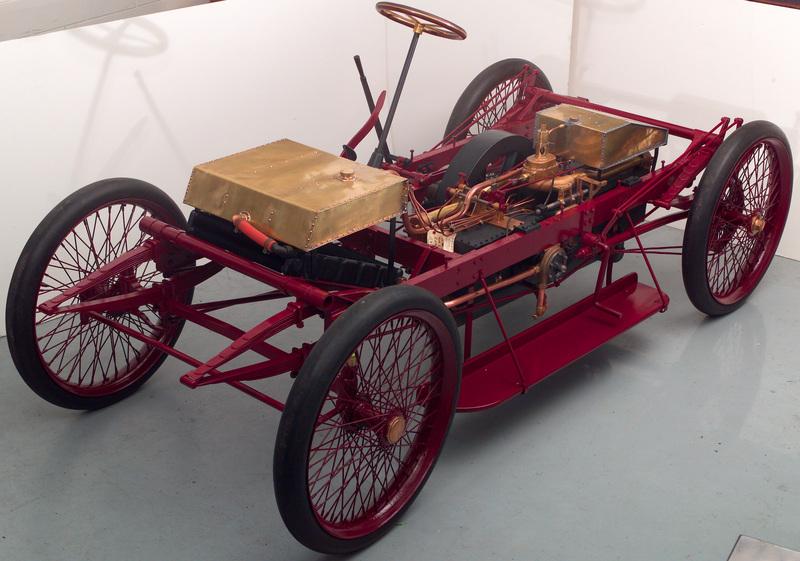 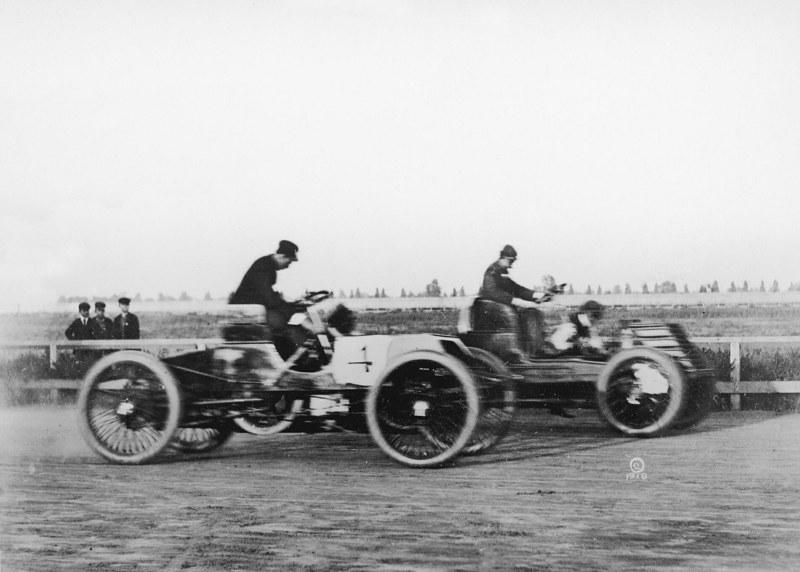