Hertz Mustangs return to US

Hertz Mustangs return to US

Continuing a collaboration that dates back to 1966, Shelby American and Hertz have announced a new “custom car partnership” that will see a batch of 2022-model Shelby Mustangs available to rent from selected Hertz locations throughout the USA, in line with Shelby American’s 60th Anniversary this year. 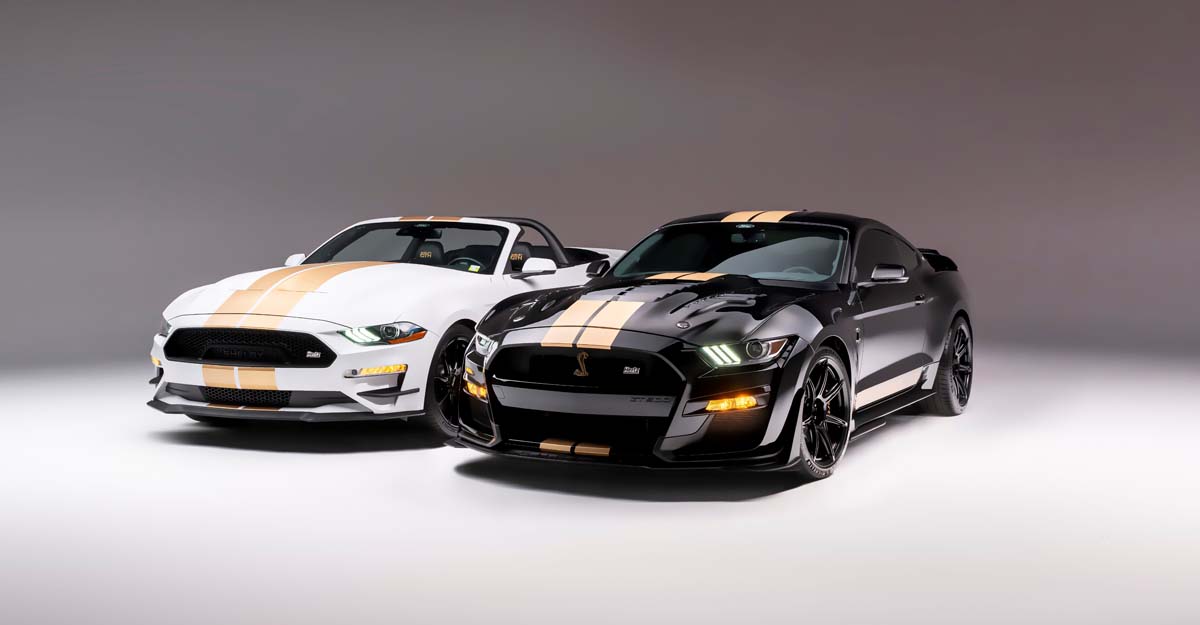 “Shelby teamed with Hertz to create the 1966 Shelby GT350-H, which immediately became one of the most exciting rental cars in the world,” said Joe Conway, CEO of Shelby American.

“Together, we made history again with both a reborn Shelby GT-H in 2006, 2007 and 2016. Now we’re going even further with the first Mustang Shelby GT500-H, which is the most powerful rental car that Shelby has ever built.” 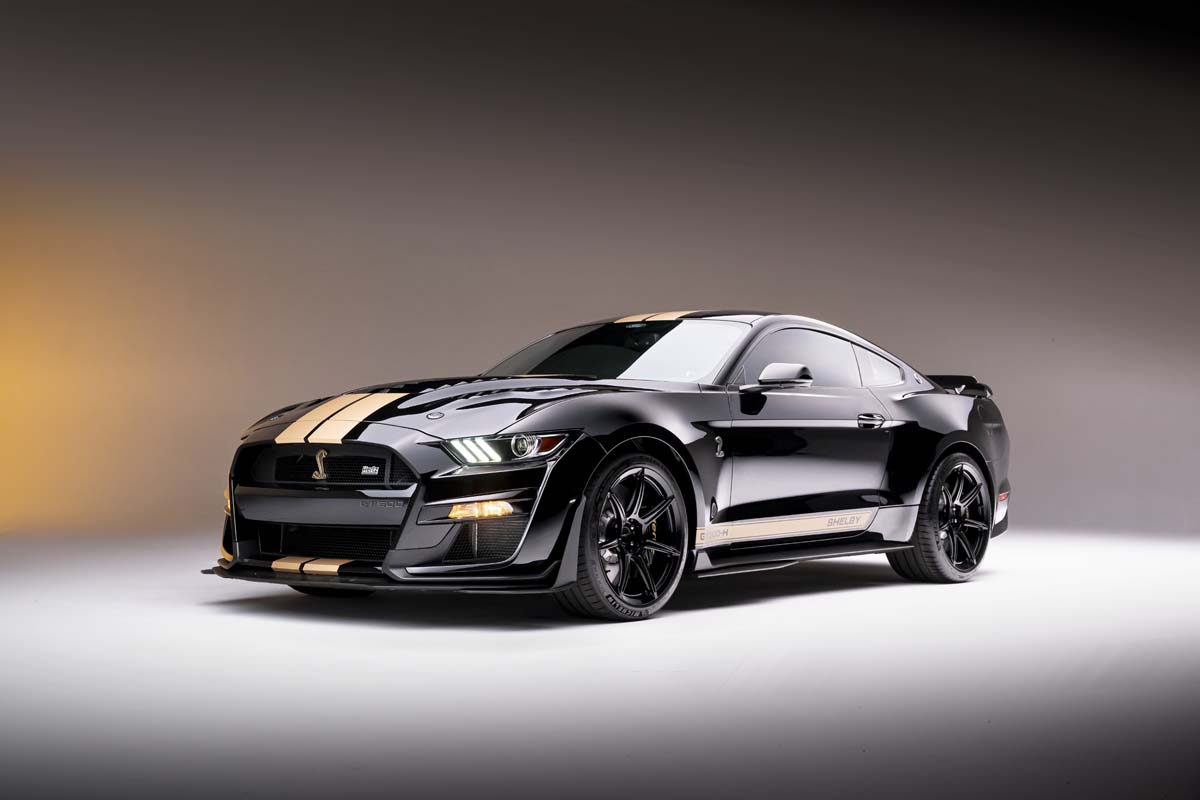 The Mustang Shelby GT500-H is being offered for the first time since this partnership began in 1966 and will be modified beyond the Hertz badging and identification.

Instead of the usual 760hp (566kW), the GT500’s supercharged 5.2-litre V8 has been modified by Shelby American to produce 900+hp (670+kW) in GT500-H form, with a high-volume supercharger intercooler and heat exchanger, cold air intake system and Borla cat-back exhaust added.

The GT500’s seven-speed dual-clutch automatic remains unchanged for the GT500-H, with other features including a ventilated carbon fibre performance bonnet (that’s 13.6kg lighter than the standard bonnet), forged aluminium mono-block wheels in 20x11-inch front and 20x11.5-inch rear sizes, performance tyres, Hertz-branded brake calipers, a Hertz badge in the grille and the signature Shelby gold striping over the body and on the lower flanks. 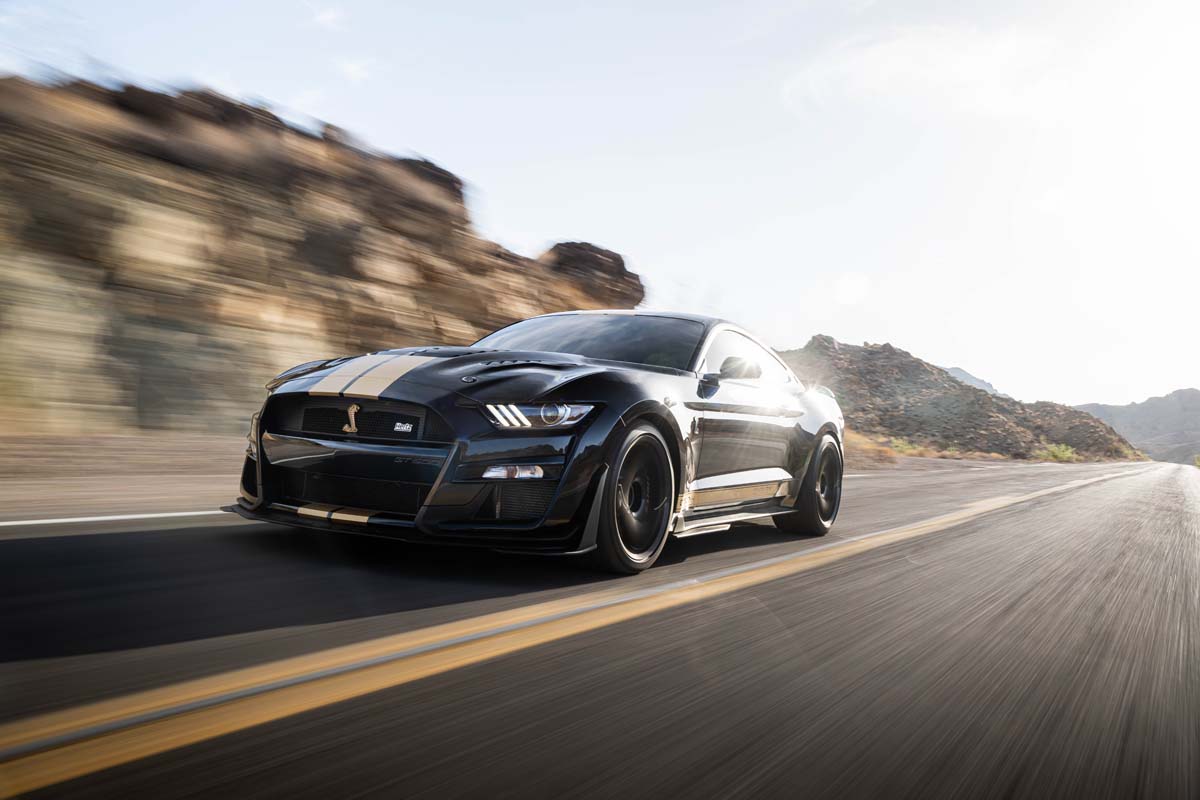 Additional Hertz and Shelby identification features inside, on the sill plates, seats and floor mats. Tinted windows are standard and numbered badging features on the dash and in the engine bay, with the supercharger for that modified V8 finished in gold, too.

Only 25 units of the GT500-H will be added to Hertz’s US rental fleet, 19 in Shadow Black and six in Oxford White, with rental fees of US$399/day. They will stay in the fleet for three years before being sold on. 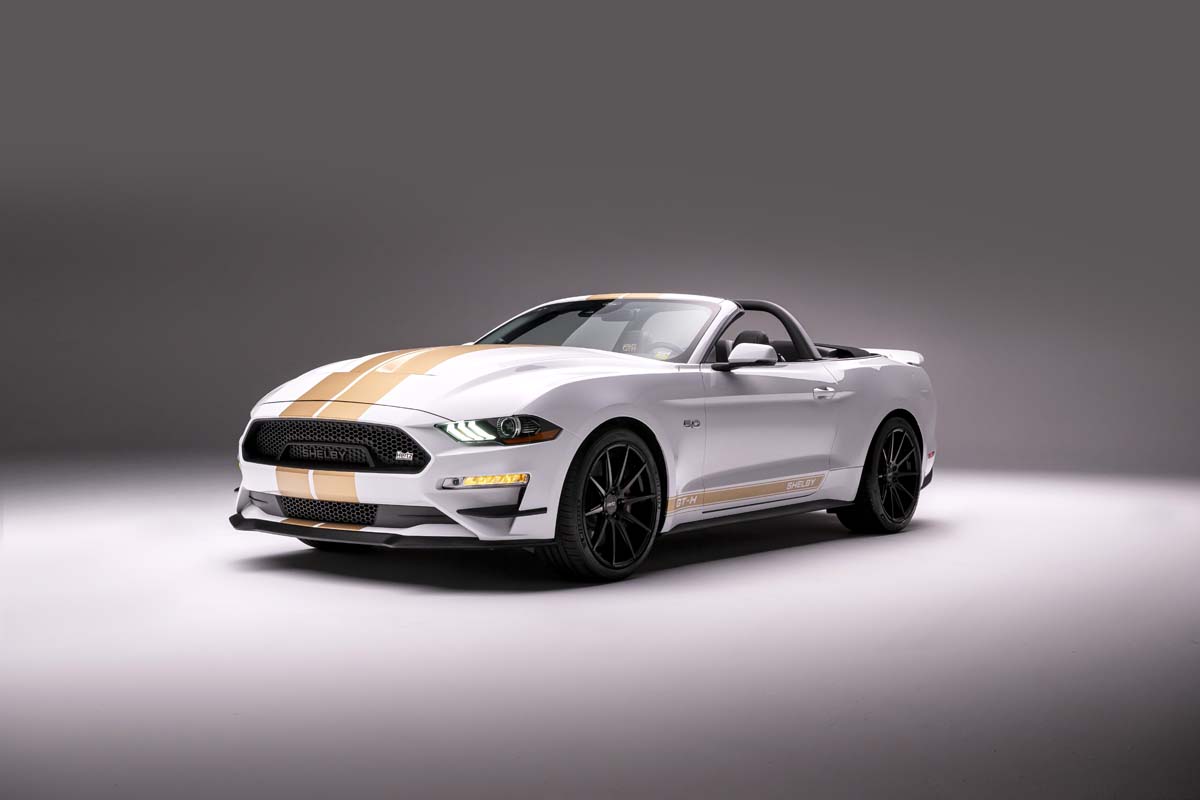 Like the GT500-H, the Shelby Mustang GT-H has also been created specifically for Hertz and features similar striping, badging and identification.

While it runs the GT’s standard 5.0-litre V8, there is a Borla cat-back performance exhaust upgrade, and all GT-H units will be fitted with a 10-speed automatic transmission.

Other features, applied to both the GT-H convertibles and fastbacks, include a unique, Shelby-designed, ventilated deep-draw bonnet and upper grille, front fascia winglets and a special taillight panel. A rear spoiler, puddle lamps, tinted windows and 20-inch aluminium wheels (in a staggered 9-inch front and 10-inch rear combination) with all-weather Michelin tyres are also part of the GT-H specification. 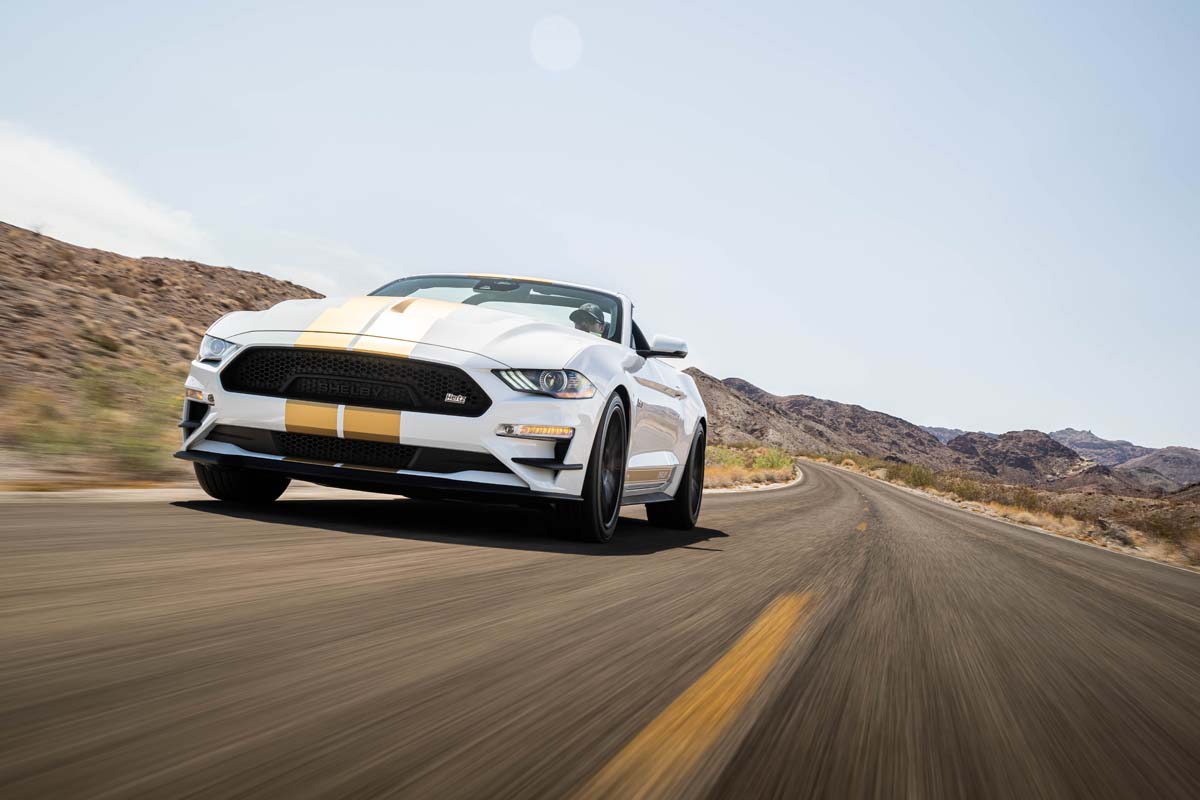 Convertibles gain a light bar and headrest embroidery, while seats on the coupes are recovered in leather.

Available in Shadow Black, Oxford White, Carbonised Grey and Rapid Red metallic, with gold striping common to all, the GT-H will also be available in more Hertz locations in the US – 12 versus 6 for the GT500-H.

The total number of GT-H cars to be produced has not been revealed, but Shelby American say it will be limited. 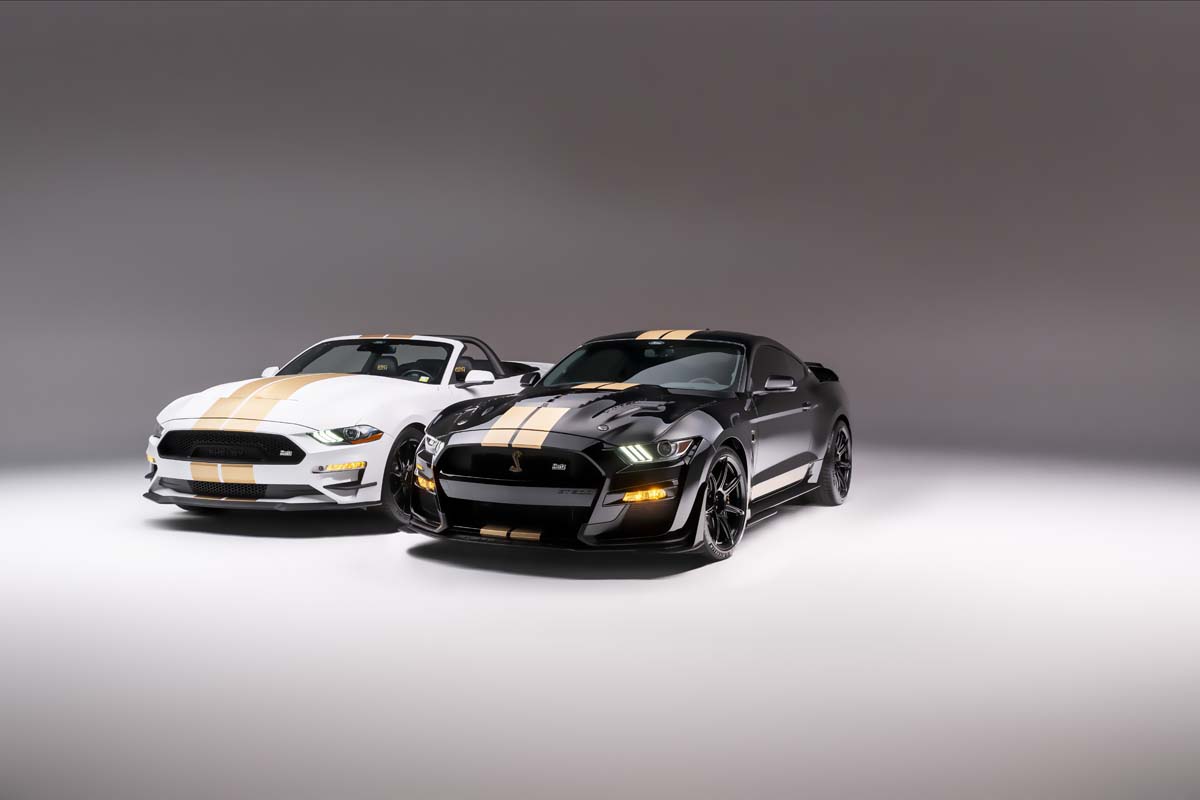 All MY22 GT500-H and GT-H cars will be completed at Shelby American’s assembly facility in Las Vegas and all will be documented in the official Shelby American Registry, ensuring they’ll be collector's items one they're removed from the rental fleet.

“Hertz and Shelby American have created driving magic again,” said Stephen Scherr, CEO of Hertz. “This partnership has made automotive history many times over the years, and we look forward to future collaborations that will continue to both push limits and delight our customers with exciting cars and experiences.”