Dr Richard “Harry” Harris regularly puts himself out there. Formerly an aeromedical consultant and anaesthetist with the South Australian Ambulance Service, he’s been part of emergency medical teams for natural disasters in the Pacific and played a vital role in one of the most dangerous rescue missions in world history.

But then, one of the heroes of the Tham Luang cave rescue meets another perplexing challenge – a Morris Cooper S… 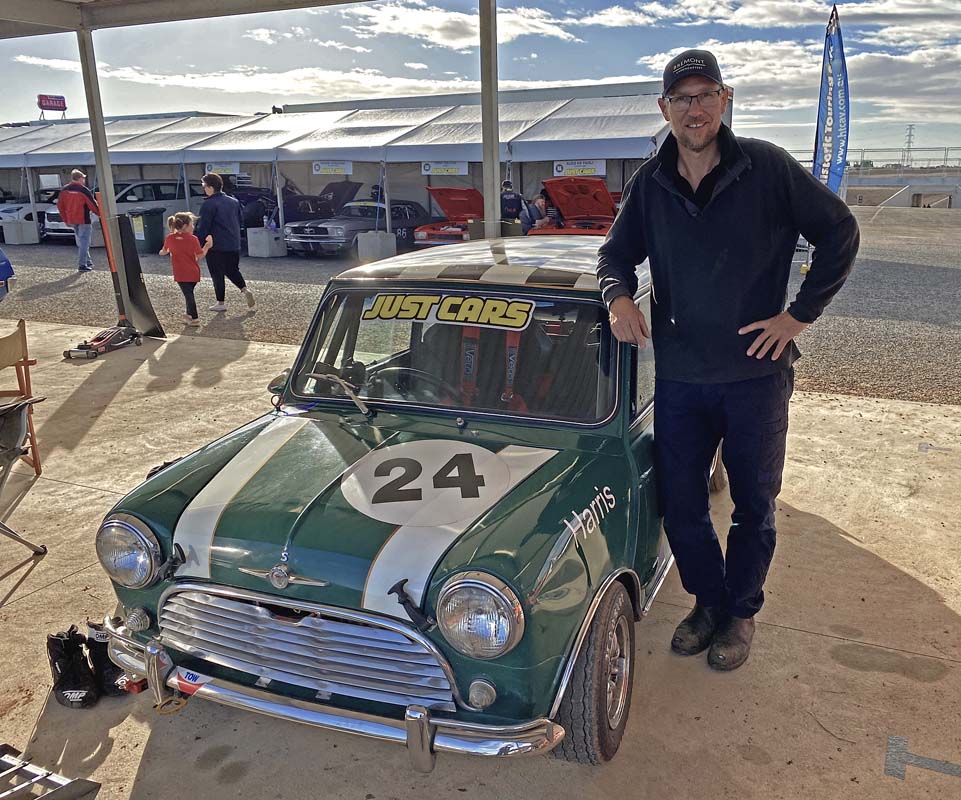 In mid-2018, Harry and diving partner Dr Craig Challen are called on to help an international rescue team of thousands in Thailand. Their calm and bravery are critical in rescuing a team of twelve young soccer players and their coach from a flooded cave 1km below and 2.4km into a mountain in the Doi Nang Non range in the country’s far north.

Deep underground, Harry’s professional and recreational expertise come together as the critical piece of the puzzle. The weakened and frightened kids can’t swim, so testing and preparation are everything.

Harry carefully anaesthetises each of the boys. Then, in wetsuits and with their hands and feet zip-tied behind them, each boy is floated by dive teams, one-by-one, for three hours and nearly 4km through the dark, fast-running serpentine waters.

Four boys per day see daylight after 16 days trapped underground. Save for the tragic death of a former Thai Navy Seal, a mission given little chance of a good outcome is 100 per cent successful.

In gratitude, the King of Thailand appoints both Harris and Challen as ‘Knights Grand Cross’. In 2019, the pair are awarded the Star of Courage, the Medal of the Order of Australia and named joint Australians of the Year. They are public heroes and very busy people for the rest of 2019.

But somewhere in that most eventful year, at home in Adelaide, Harry starts to yearn for – of all things – a Mini. Why?

“I’ve owned and tinkered with heaps of cars and would change them pretty frequently - mostly 4WDs of course, given the nature of my outdoors life,” Harry explains.

There were some ‘road’ cars, though, but a photo of a young, bare-chested Harry with his Holden HR can’t be found to balance the books…

“I found myself saying to people: ‘I’d love to buy a Mini.’ Eventually, I found one that had been used for track days and hillclimbs. It was already half a race car, so I thought ‘I’ll race it!’.

When talking on the phone, “Harry Power” comes through instantly. A rapid, clear mind and sense of great personal confidence – the qualities of a leader – are unmistakable. But there’s also an easy humour that lets him poke fun at himself…

“Look, deep underground, under water, that’s my happy place – unknown, claustrophobic, dangerous - a place some people would fear. But swapping flippers for race boots – that sat me on my bum!”

Into the deep end

Collecting all the racing kit and slapping a "P" sticker on the back of his brick, Harry takes to the track with gusto. Like many newcomers to historic racing, he expects to be right up there, right away. His first race days at Mallala in SA see him at the back of the field, but as track craft comes, he gradually improves.

Harry admits it was a steep learning curve, but in only his second race meeting at The Bend, he’s midfield in the wet. He’s having fun and the bug has bit.

Time to up the ante

“Things had started to break – gearbox, clutch, engine.” (That’s pretty much all there is of a Mini.) “I’m very goal-focused, so this car wasn’t going to beat me!”

As capable as he is, Harry knew the finer points of Mini fettling were outside his skillset, so he turned to renowned fast Mini preparer and fellow South Australian, Jason Armstrong at Dave Armstrong Motors. It was a meeting of two strong characters.

“I certainly had to earn their trust to start with!” laughs Harry. “But Jason built me a fantastic 1293cc short-stroke motor - in goes a ‘dog box’ and a lower diff ratio.”

If one is good, two must be better

In SA, one of Australia’s strongest Mini states, traditional ruling rivals Jason Armstrong and Justin Elvin have recently been joined by Jonathan French in an ex-Armstrong car. But with his hotter engine, Harry’s now right in the mix behind them, enjoying fierce battles with long time Mini racer Ian Pringle.

Harry looks in Scott’s garage and tells him he has too many cars and should sell one – perhaps ‘that one’, pointing to a flared and spoilered Mk1 Escort 2-door. Scott’s wife is within earshot and shouts: “Yes, you should!” Scott’s cornered, Harry pounces. Deposit paid.

After a short FWD apprenticeship in the Mini, Harry is now taking on a very serious race car in the Escort. Is this a step too far? For most people, the answer is probably yes. But for a high energy, totally focused and very confident specialist anaesthetist adventurer who packs more into each day than most of us manage in a week (he even writes children’s books) and thrives on the next challenge? Nah.

At the peak of his powers, Dr Harry won’t be treading water just yet. There’s more big fun to be had - and more, if somewhat smaller, medals to be won!

Footnote: Joel Edgerton plays Harry Harris in ‘Thirteen Lives’, a movie about the Thai cave rescue that’ll be streaming and in selected cinemas by the time you read this.