The HTCAV held its first interstate round of the Club Championship in support of the Supercars.

The ‘JUST CARS South Australian Touring Car Cup’ was the first ever interstate round of the HTCAV Club Championship, which came about after Historic Touring Cars were invited to support the Supercars OTR Supersprint round at The Bend this past May.

A 29-car contingent, comprising 16 Victorians, six Western Australians, five South Australians, and one each from NSW and Queensland made the trip to Tailem Bend for a weekend of mixed weather that would bring mixed emotions. Most were bumped in and set up on Thursday afternoon with the stragglers arriving early Friday morning, in time for the two practice sessions at 10.10 and 12.35 respectively. 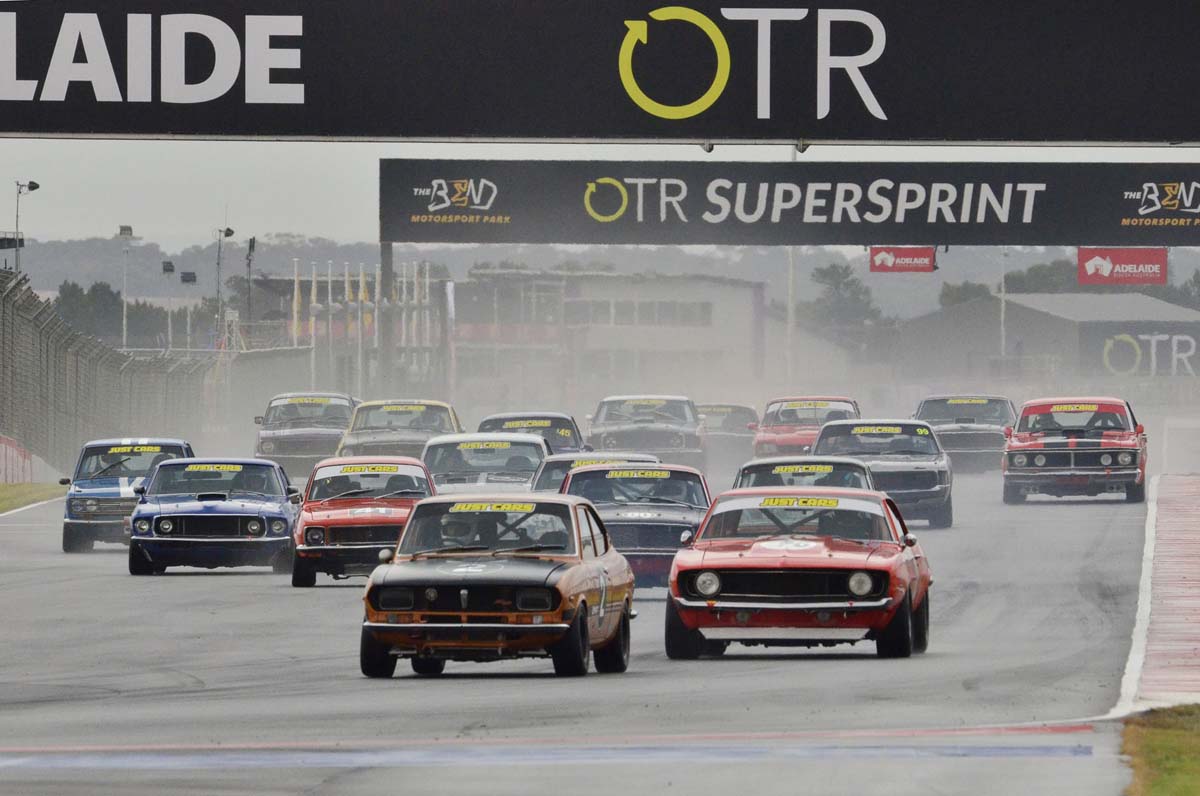 The JUST CARS racers took to a very damp track on tiptoes in cool and drizzly conditions for P1. The first casualties started to appear with Darren Jones getting a fright as a broken steering shaft on his Mustang saw him spear off into the boondocks, fortunately at one of the slower corners on the track. Joe Calleja's Mustang sounded rough as it left the pits with an electrical gremlin. After a long battle, the Mustang was loaded back into the transporter. Bad luck for Joe and crew.

Things were looking better in the afternoon, with the qualifying session held in warming conditions. The Camaro of WA’s De Paoli was the car to beat, setting a 2:10.0 ahead of Humble's RX2 with a 2:13.8 and Queenslander Ian Mewett's Mustang with a 2:14.0. WA’s Matthew Hansen in the faithful family grey ’68 Mustang, Barbour, Chris Stern’s ’68 Mustang, local Graham Jarrett’s Camaro, HTCAV President Les Walmsley’s Charger, the amazing 1600 of reigning HTCAV champ Draper and Burton’s Falcon filled the top ten.

RACE 1 - The Historics were the first cabs off the rank at 8:10am - possibly the earliest start ever! Rain had dampened the track and the lap times showed it -15 seconds below qualy pace…

When the opening race got underway, de Paoli and Humble sprinted from the pack, with Barbour's XU-1 a distant third. As the race progressed, retirements included the Walmsley Charger with a broken steering box courtesy of a coming together with WA’s Darryl Hansen, who suffered engine gremlins in his Mustang fastback, Stern with a rocker arm nut letting go, and Barbour, who retired with an overheating and very sick-sounding XU-1.

In the end, it was the nimble Humble RX2 that picked off the Camaro of De Paoli to come home two seconds ahead in first place, with Draper's lightning quick Datsun loving the conditions in third.

RACE 2 - Rain really poured down as the field gridded up for Race 2, with Humble and de Paoli sharing the front row. Lights out and away they went, with everyone jostling for positions in the heavy spray, limiting visibility severely for those a few rows back.

By the end of lap 1, de Paoli's Camaro had built an impressive lead, his spectacular speedway power slides thrilling TV audiences around the nation. Humble was doing his best in the Mazda but the gap continued to grow. Further back, Matt Hansen was having a good run, improving a few places from his grid start. Nathan Gordon (Torana), Stuart Young (Torana), Alan McKelvie (Mustang), and Tony Gilfuis (Capri) were all having a good close tussle. However, the big mover was Walmsley in the repaired Charger, coming from last place to mid-field in the first couple of laps.

After a safety car period (not unexpected in the appalling conditions) it was de Paoli who gapped Humble by seven seconds to take an easy win, with Matt Hansen a further seven seconds behind in third. Walmsley finished fourth, six seconds adrift of Hansen, which was a strong showing by the Charger from the very back of the grid.

Sunday - Down to Business

An even earlier 8:07am start greeted the JUST CARS racers on Sunday morning, but at least the track was dry and there was no sign of rain – business as usual!

De Paoli sat on pole beside Humble, with Matt Hansen and Walmsley on row two. Lights out and all got away to a great start. By the end of lap one, the first four were starting to gap the field, with Mewett's Mustang in fifth but closing.

There was good, close racing throughout the field but all eyes were on the top four. The de Paoli Camaro was pulling away easily, while Humble was keeping the RX2 out of the clutches of Mustang and Charger.

Ben Dahlstrom photobombed the television coverage, drifting the Valiant sideways through the right hander in front of the cameras. Meanwhile, a spectacular 360 by Humble across the hump at the back of the circuit saw Hansen, Walmsley and Mewett cruise past before the RX2 could recover. But it wasn't long before Humble was back on the tail of Mewett and the four were duking it out for the minor places.

As de Paoli showboated the Camaro through the last turn to take the checker, Hansen managed to stay ahead of Walmsley, with Mewett and Humble side by side through the last few corners. As they swept onto the main straight, the order remained the same until Humble made a desperate lunge at Mewett on the line to pinch fourth from the Queenslander.

De Paoli had won by 23 seconds from Hansen, with Walmsley two tenths behind in third. Only two seconds covered the duelling quartet from second to fifth.

The weekend's racing at The Bend was exciting, close and a spectacular show for both spectators at the track and the hundreds of thousands of TV viewers across the country.

Demonstrating that the historic category deserves its place on the Supercars schedule, the success of the special round at The Bend round was made possible by the hard work and tenacity of the Historic Touring Car Association of South Australia’s Robert Smith and the HTCAV’s Chris Stern.

It was top-line interclub co-operation - entrants who put on a spectacular showing, crews who worked tirelessly to get (almost) every car on track for each race, and wives, partners and families who pitched in and helped out.

Mother’s Day wasn’t forgotten, with a very special morning tea provided by Janine Stern and her helpers, and the hospitality was great, with Robert Smith and HTCASA President Paul Atkins hosting the weekend and providing nibbles and drinks for all.

The prize giving was well attended, too, with seven big raffle prizes from WA’s Tony Gilfuis and Ozito’s Danny Myers, plus handsome trophies right through the field. The prestigious Makulu Vehicle Storage Driver of the Meeting was awarded to Aldo de Paoli.

Roll on next year!