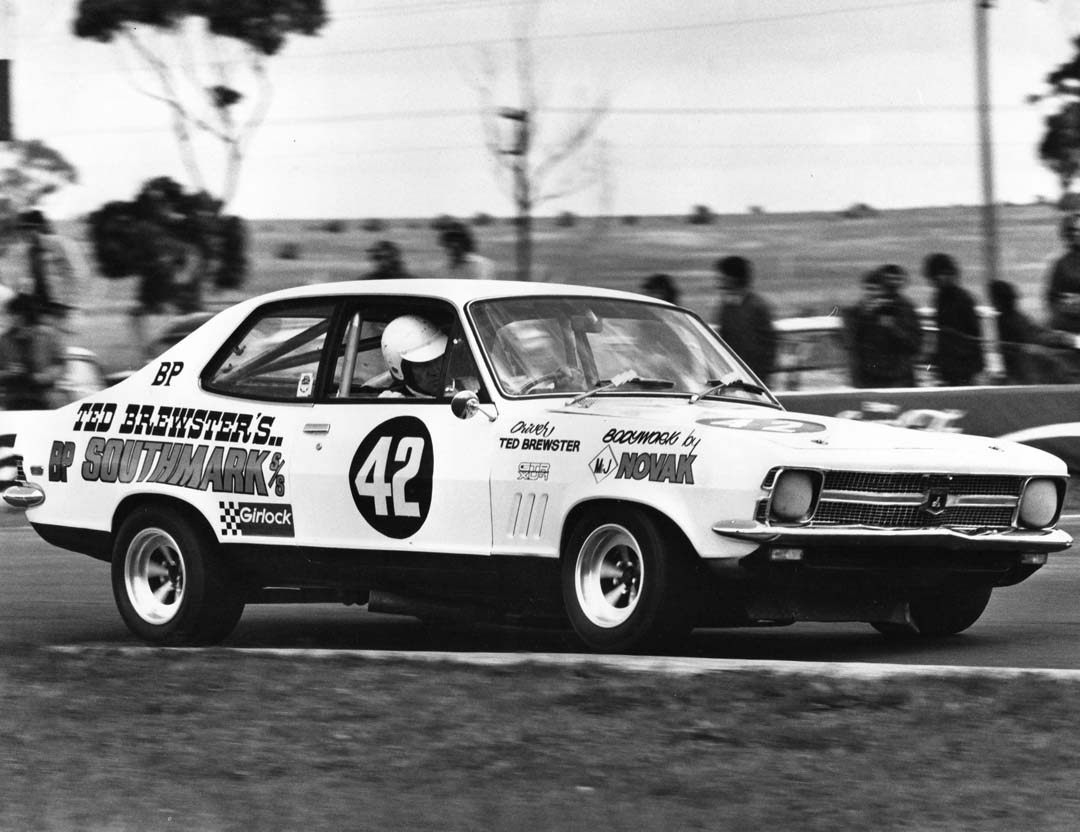 Today, the HTCAV’s oldest competitor regularly spanks the competition in his Number 42 Morris Cooper S – and it’s not just other Minis that are trounced by Ted Brewster. Many larger cars have found out what a lifetime’s worth of tricks and fierce driving can bring to a man whose passion for motorsport remains as strong as ever.

A teenage Ted spent holidays on a farm, where the delights of a paddock bomb changed his dreams from agriculture to car culture. Soon apprenticed to a South Melbourne garage, he rode his pushie from Brunswick daily until a licence and a few saved pounds, shillings and pence had him on four wheels and itching to try motor sport.

At first, he competed successfully as a navigator alongside noted car dealer John Blanchard in rallies (called ‘trials’ in the 1950s) in a Volkswagen. Ending upside down in a gorge against a tree prompted a re-think: a noisy, bored-out Austin A40 tourer with twin carbs and a hotter cam became a regular at hillclimbs.

It later made way for a 1958 VW, which served as the family chariot for Ted, new wife Margaret and first son Darren through the early 1960s - when it wasn’t carrying No.42 as a weekend warrior!

Beetles had become uncompetitive, so, after watching Peter Manton race a Mini at Calder, Ted turned to Improved Touring in 1965 with a 997cc Morris Cooper. Developing this car to the limit, he won the first of four consecutive Victorian Hillclimb Championships, before switching to a 1071cc Morris Cooper S. With that, he won the Joseph Lucas Touring Car Series at Calder and continued to set records there, as well as at Lakeland and Templestowe hillclimbs.

Putting a 1310cc engine in the Cooper S for the 1968 Australian Hillclimb Championships, Ted beat Alan Hamilton’s Porsche 911T to the touring car category win by 0.4 of a second. With his own South Melbourne garage performing equally well, 1968 was a good year for Ted.

Toranas, Rotaries and Turning Back the Clock

Asked to take part in a demonstration, the old bug bit Ted again – so he built another Mini, carrying (what else but) the famous Number 42. Little did he realise at the time that another three decades of successful motor sport lay ahead.

The green Mini with the yellow stripe has been a staple of the series ever since; always in the mix and often at the pointy end.

Ted is also famous for his ‘rain dance’ when skies look promising. Performed in the pits before amused onlookers, sometimes it actually works – in 2002 at the Phillip Island ‘Island Magic’ meeting, the heavens opened. As the big V8s and swift sixes slithered and slewed, Ted charged through the field to take the Victorian Touring Car Trophy outright…

Aged only a few years short of 70 back then, Ted instantly added to his already legendary status among fellow racers and followers. Little did they know that, in another 15 years, he would still be punting as hard as ever, embarrassing bigger cars and younger drivers alike.

These days, Ted continues to build his own engines and transmissions; after all, there’s nothing he doesn’t know about Minis.

“So, you reckon I do 8,000 rpm?” he commented after reading this article, “Occasionally at the end of the straight at Phillip Island, maybe. With a tailwind. Stick to the facts, son – I stick to 7,600.” Attempting a stern face, he soon cracks up…

With Margaret, who knew nothing about motor sport when they met, but who has been by his side at every race meeting since, the venerable Charles Edward Brewster remains an inspiration for the whole category.

The pair like nothing better than welcoming visitors to their pits at historic meetings – so make a point of dropping in on them at Historic Sandown this November. 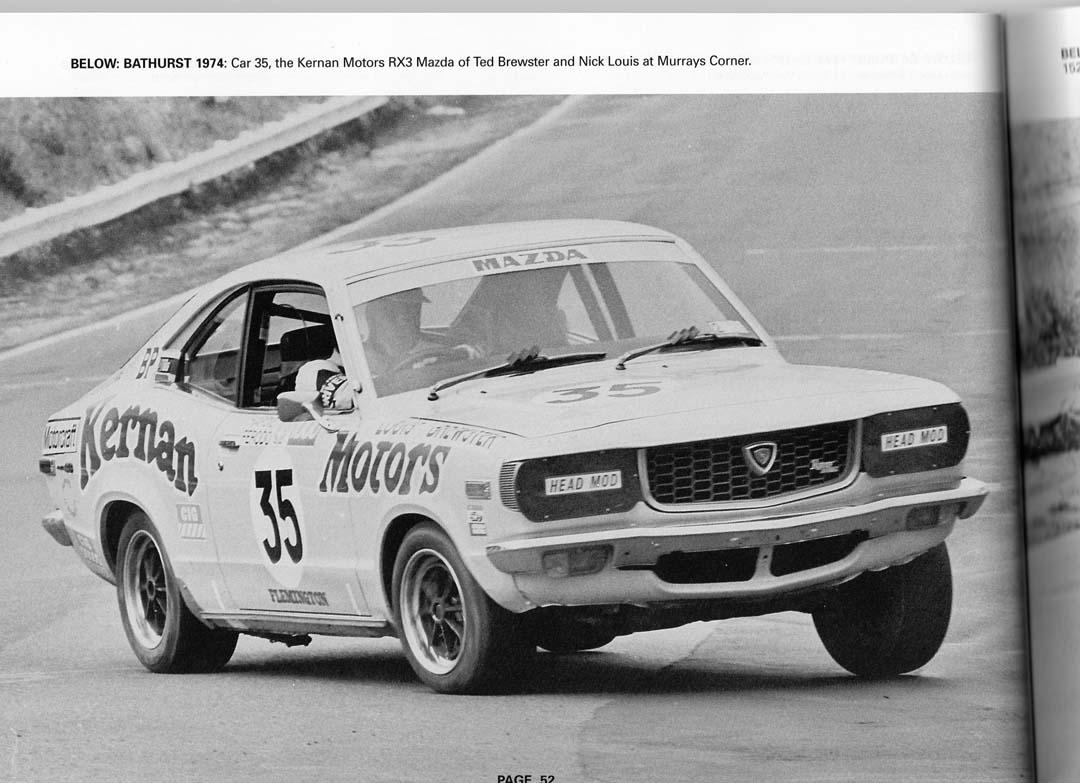 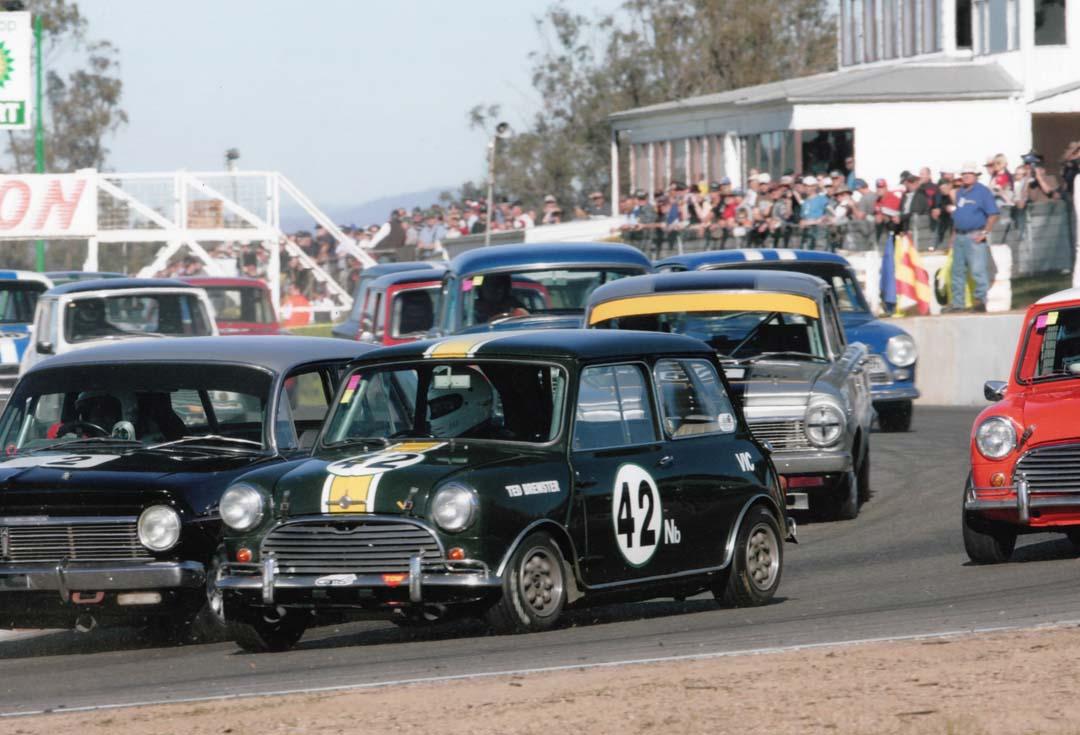 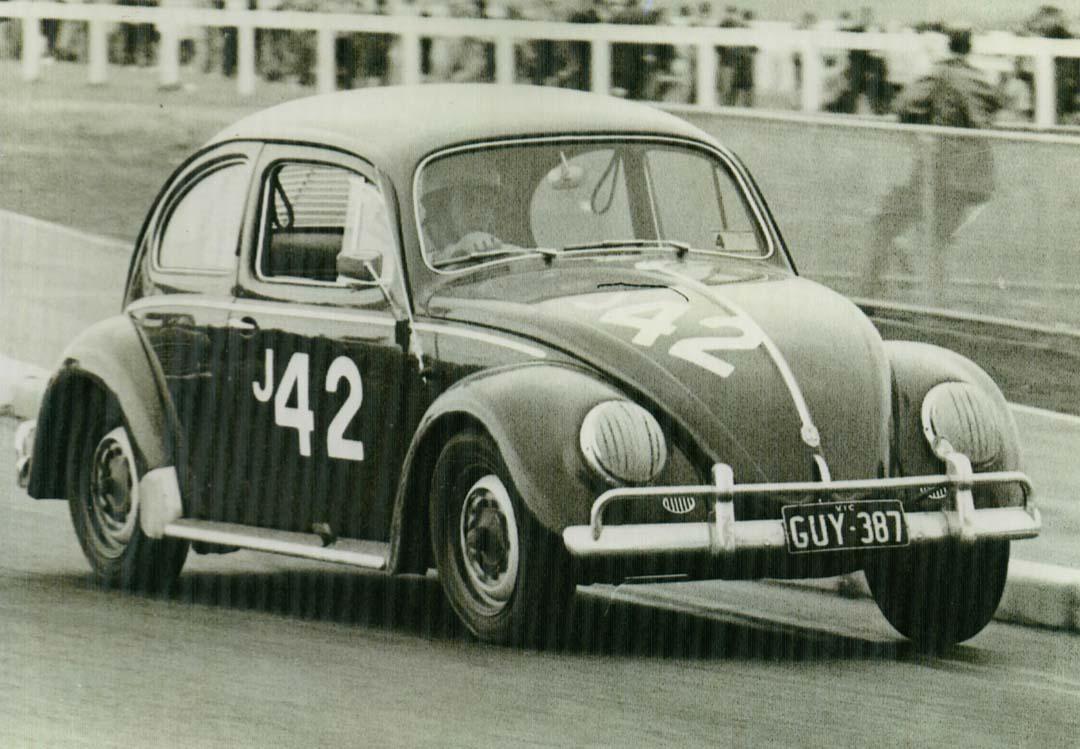 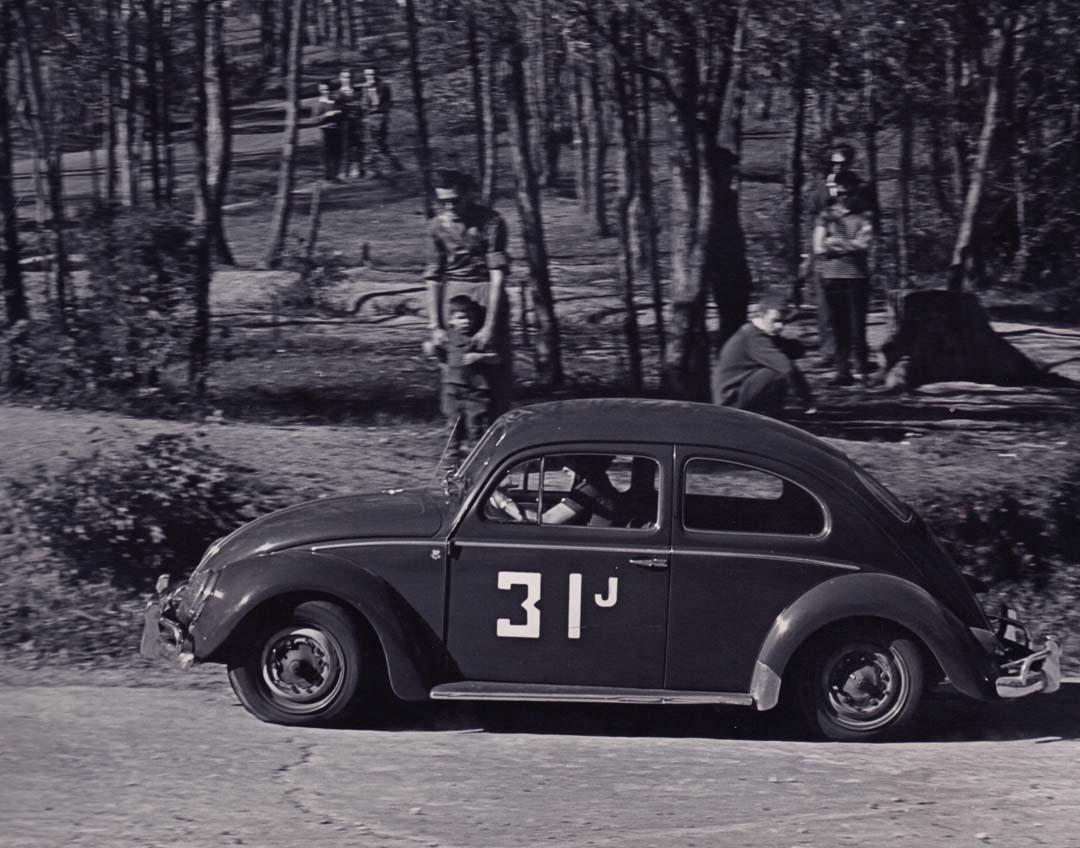 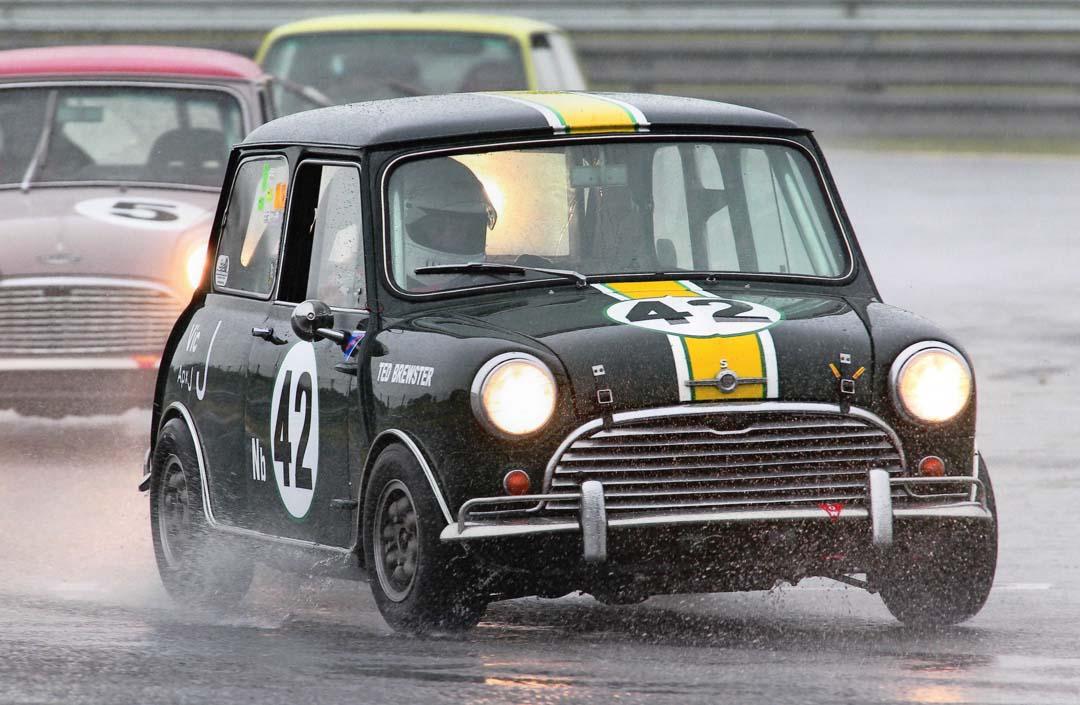 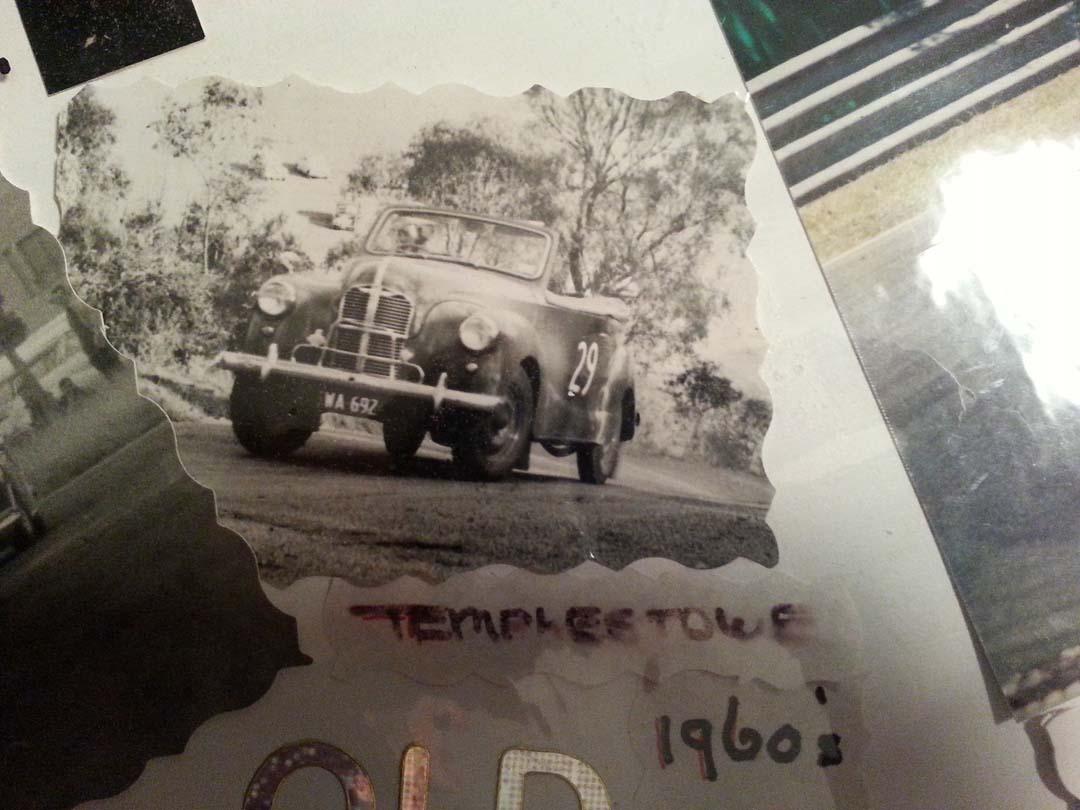 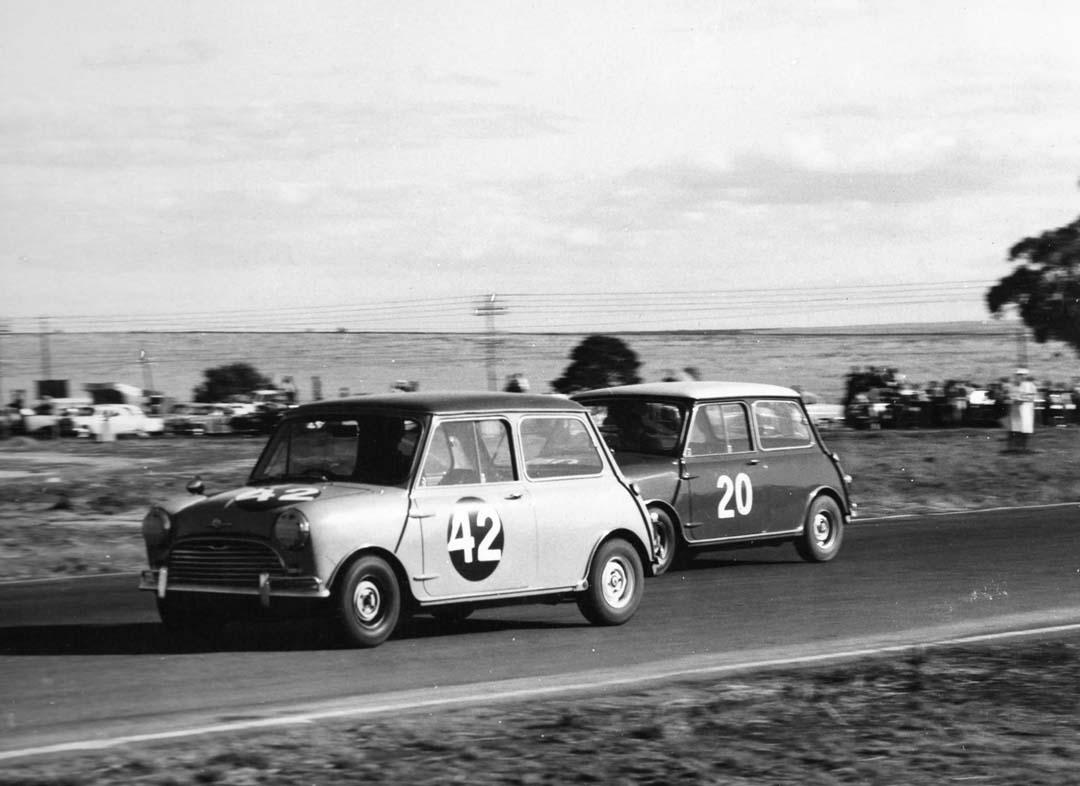 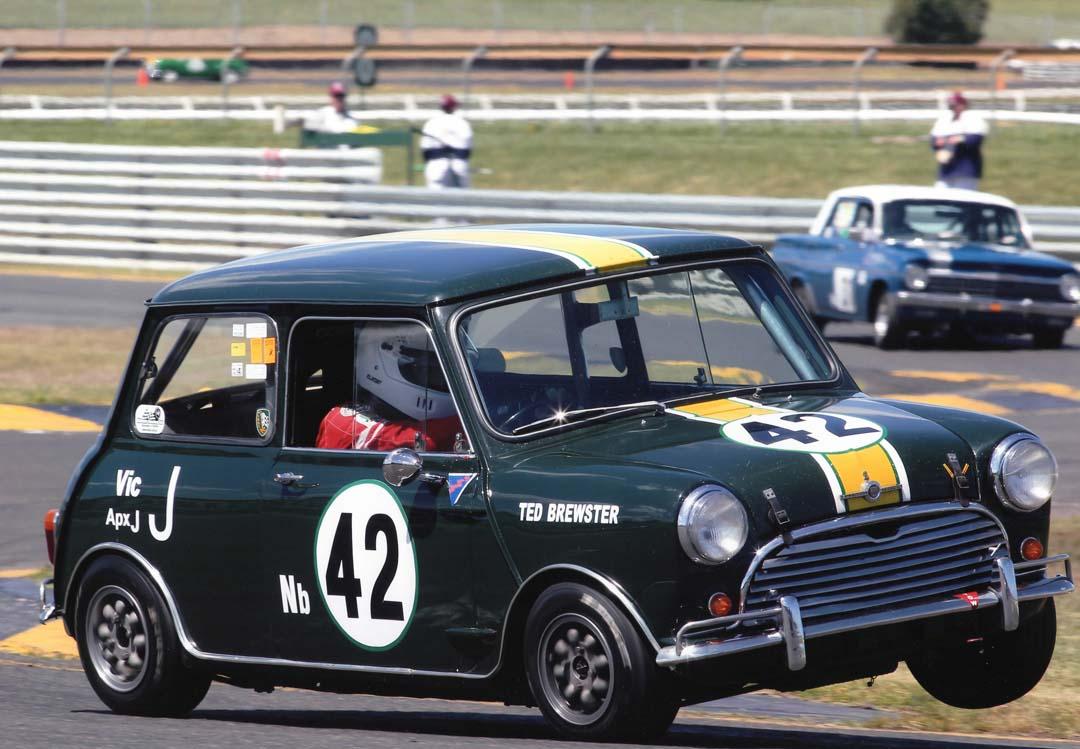 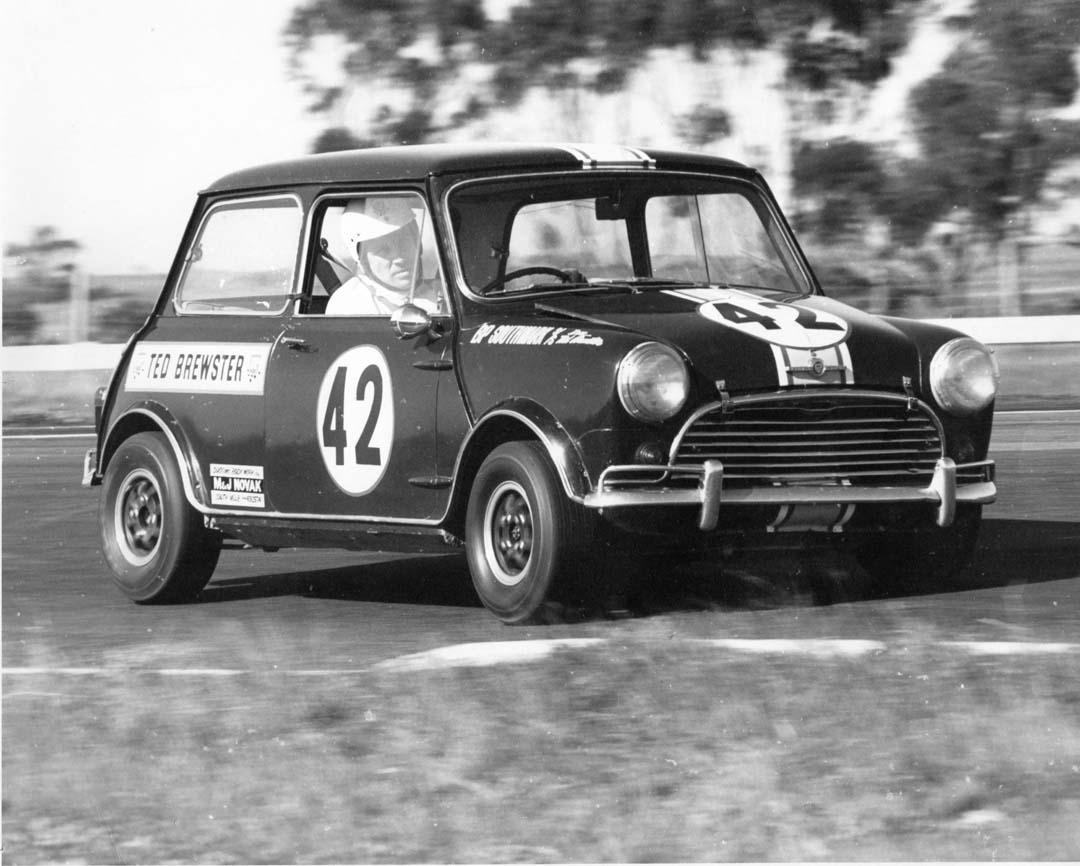 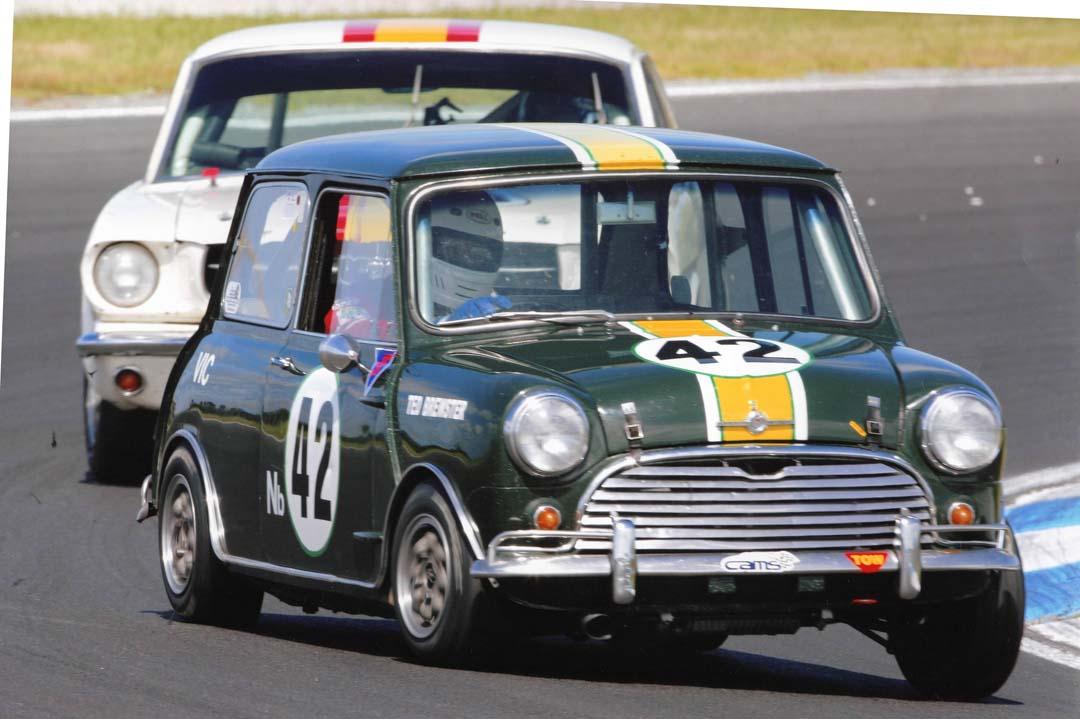 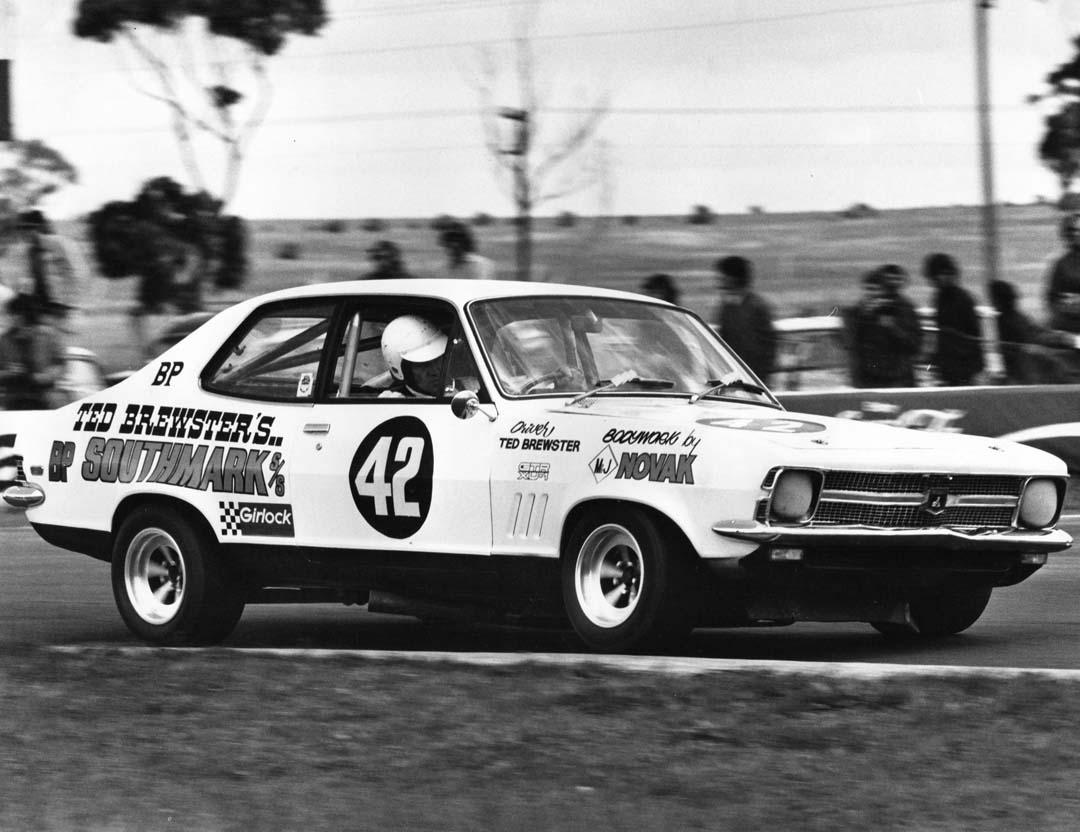 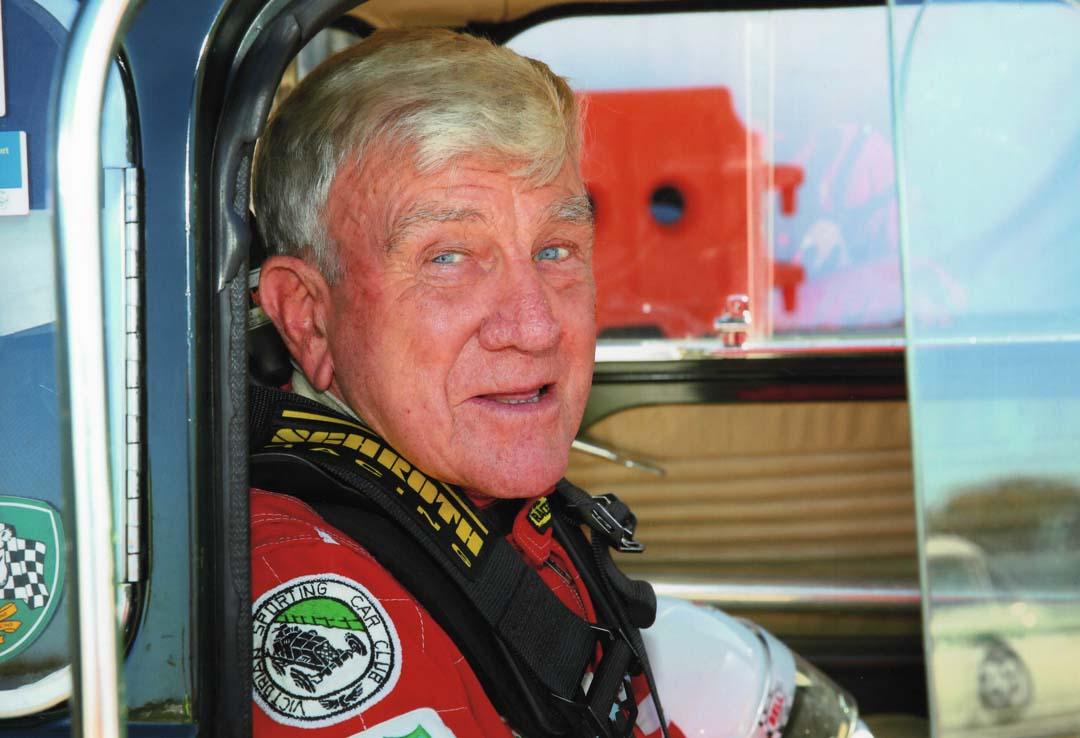 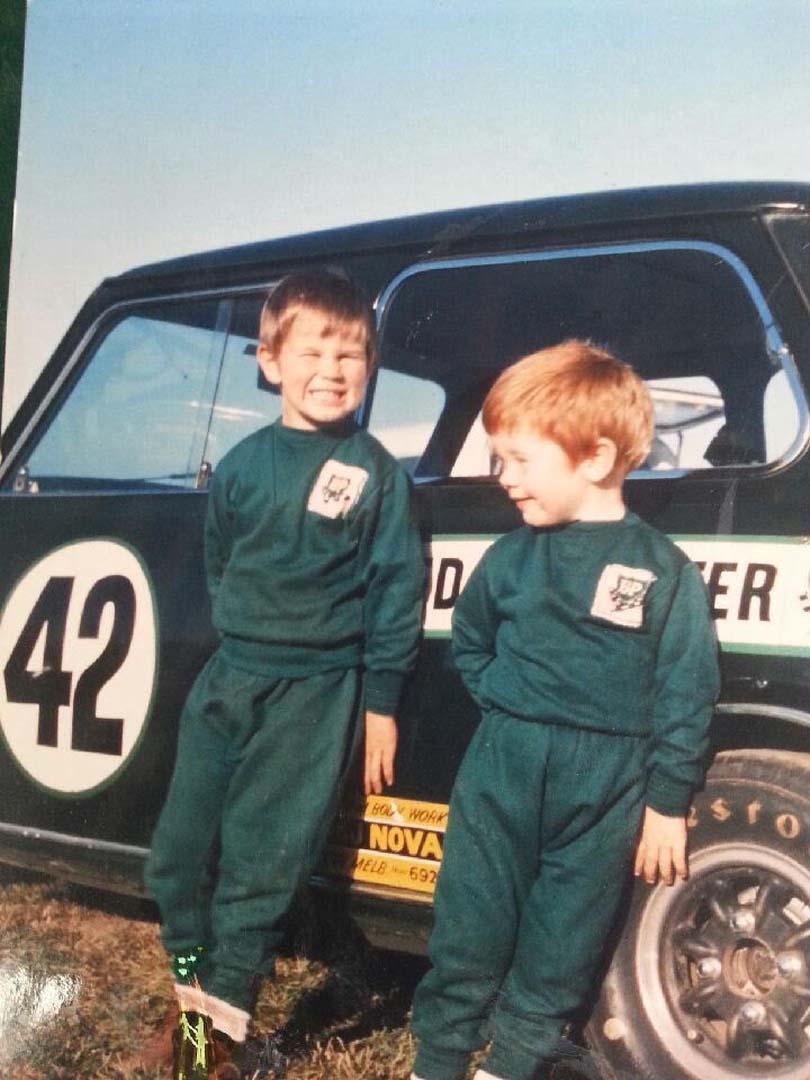