Numbers were small, but excitement was big for the JUST CARS racers at Phillip Island.

Eight historic touring cars took part in Round 3 of the Victorian State Race Series on 15-16 May. After the big event at The Bend on the previous weekend, numbers were down, but Pete Meuleman in the Nb Mustang and Andrew Lane in the Fastback fronted up to grab as much seat time as they could. 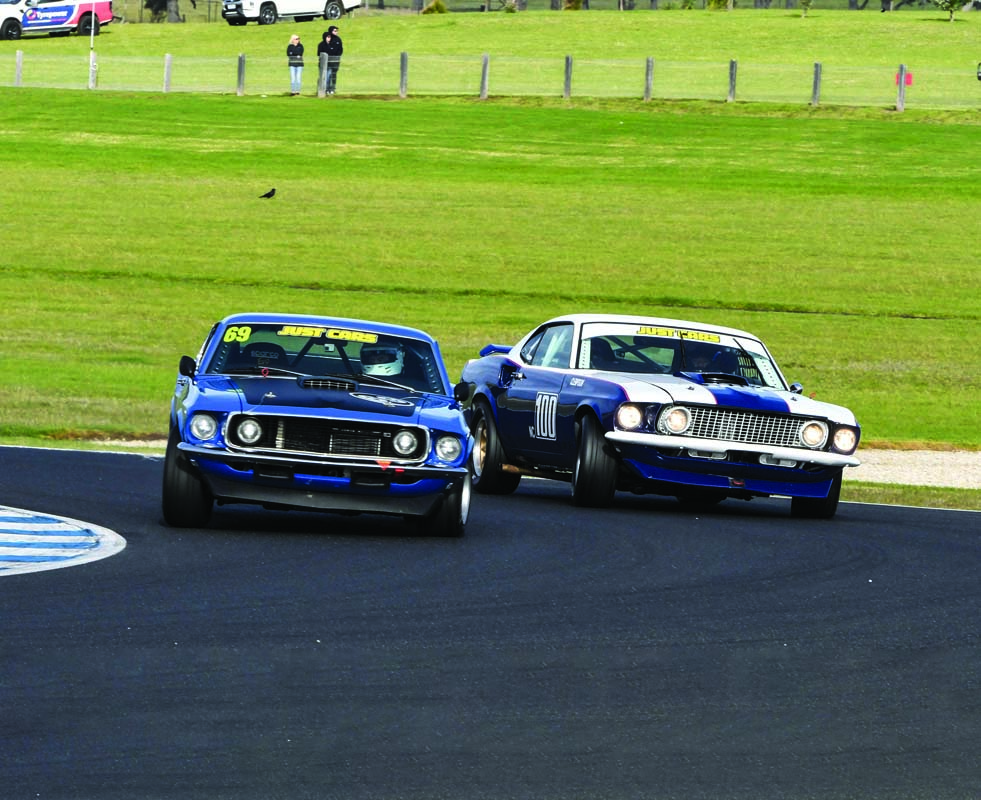 Wet weather in qualifying got worse for the race, with the extra amusement of having to contend with 20 Holden HQs in a combined grid.

Michael Miceli’s Fastback Mustang took pole, with Island expert Mark Brewster’s Torana in second, ahead of Trevor Talbot having his first run in the ex-Angelo Taranto Camaro. Dom Leo was next in the ex-Stern Trans Am Mustang, ahead of Andys Lane and Clempson in Mustang Fastbacks, followed by Pete Meuleman (Mustang), Stephen Pillekers (Torana), the invited Fiat 131 of Philip-Jon Buggee and Bill Trengrove (Falcon Sprint).

As the rain pelted down for Race 1, Brewster bolted from the front row to lead by a country mile, but his huge grin disappeared when proceedings were red flagged by a HQ incident. Drat!

Well, at least it wasn’t raining for Sunday’s Race 2 and the furious Fastbacks of Miceli and Clempson made a race of it, crossing the line in that order, just 0.5 seconds apart. Leo was next, then the quartet of Lane, Talbot, Brewster and Trengrove, followed by Pillekers, Meuleman and Buggee.

Having posted the fastest lap, Clempson was champing at the bit for Race 3, and in the afternoon’s eight-lapper he made no mistake about it, swapping fastest laps with Miceli before clearing out to a 10+ second victory. Lane, having led for the first three laps before succumbing to Miceli, wasn’t far behind, with Leo and Brewster less than a second apart. Trengrove, Pillekers, Meuleman and Buggee closed the race off.

Historic Touring Cars now take a mid-year rest (enforced by COVID-19 lockdown at the time of writing) before the big Winton Festival of Speed meeting in August, when the 50km JUST CARS Cup will be the feature race on a packed programme. Rug up and roll up for that one!