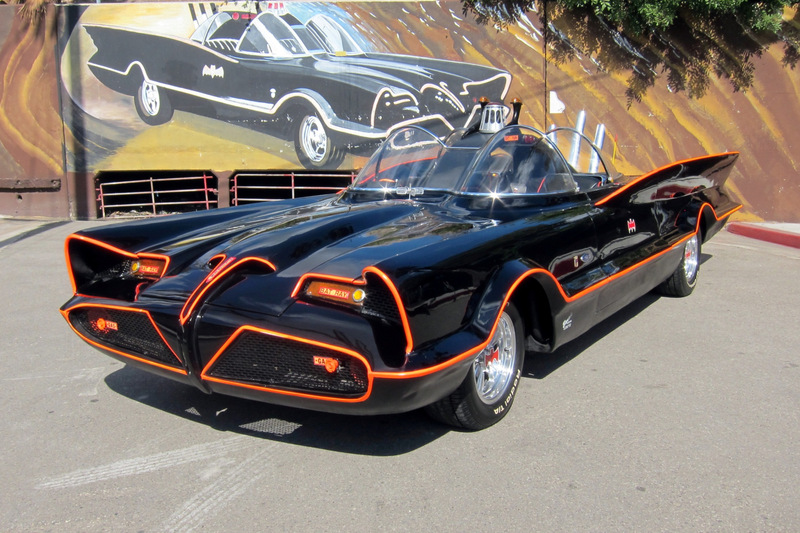 The Batmobile is for sale through Barrett Jackson, the same company who auctioned the car in January, 2013. Back then, the car was sold to a Batman fan by the name of Rick Champagne, who pledged to place the famous vehicle in his lounge room!
He's obviously had a change of heart recently, consigning it for sale through Barrett Jackson. It should be noted this time around that the car is not being auctioned, but offered for general sale through Barrett Jackson.
Those that know the Batmobile history know it was created by George Barris, but based heavily on the Lincoln 'Futura' concept created by Ford Motor Company in 1955 to serve as a 'dream car' on the motor show circuit. Repainted red, but otherwise unaltered, the Futura appeared in the 1959 movie 'It Started With a Kiss', then languished for a number of years afterward, before Barris bought the drivable concept - allegedly for just US$1.
To meet a brief set by Twentieth Century Fox, the producers of the Batman TV series, Barris, along with designer Herb Grasse and Bill Cushenberry, converted the Futura into the Batmobile in double quick time (15 days) so the car could make its debut in the series that started screening in 1966.
While the Futura's basic platform was unaltered, a number of sheetmetal changes were made to the nose, flanks and rear, including the memorable 'jet nozzle' at the back end. The Futura's twin-bubble windscreen was also retained by Barris, but the interior featured several changes from the show car, including all the appropriately Bat-centric touches.
Since its TV debut, the Batmobile has become an icon, spawning numerous copies, both authentic and not-so-authentic, authorised and not; there's even a company in the US producing Batmobile copies to order. But there is only one genuine, original Batmobile, and that was the unit offered for sale by George Barris - from his own personal collection - at the Barrett Jackson auction in January, 2013.
At that auction, the final sale price was US$4.62 million (AU$4.43M at the time) including commissions. Now, the asking price for the car is US$5 million (AU$6.17 milllion), but Champagne says offers will be considered.
Further details at:barrett-jackson.com
Images: Jana DeHart, courtesy Barrett-Jackson
Advertisment
Advertisment