Announced in 2019 and unveiled midway through 2021, Peugeot’s all-new ‘9X8’ racing hypercar continues its development ahead of a likely racing debut in 2022 and was recently photographed in a setting designed to enhance its aesthetic. 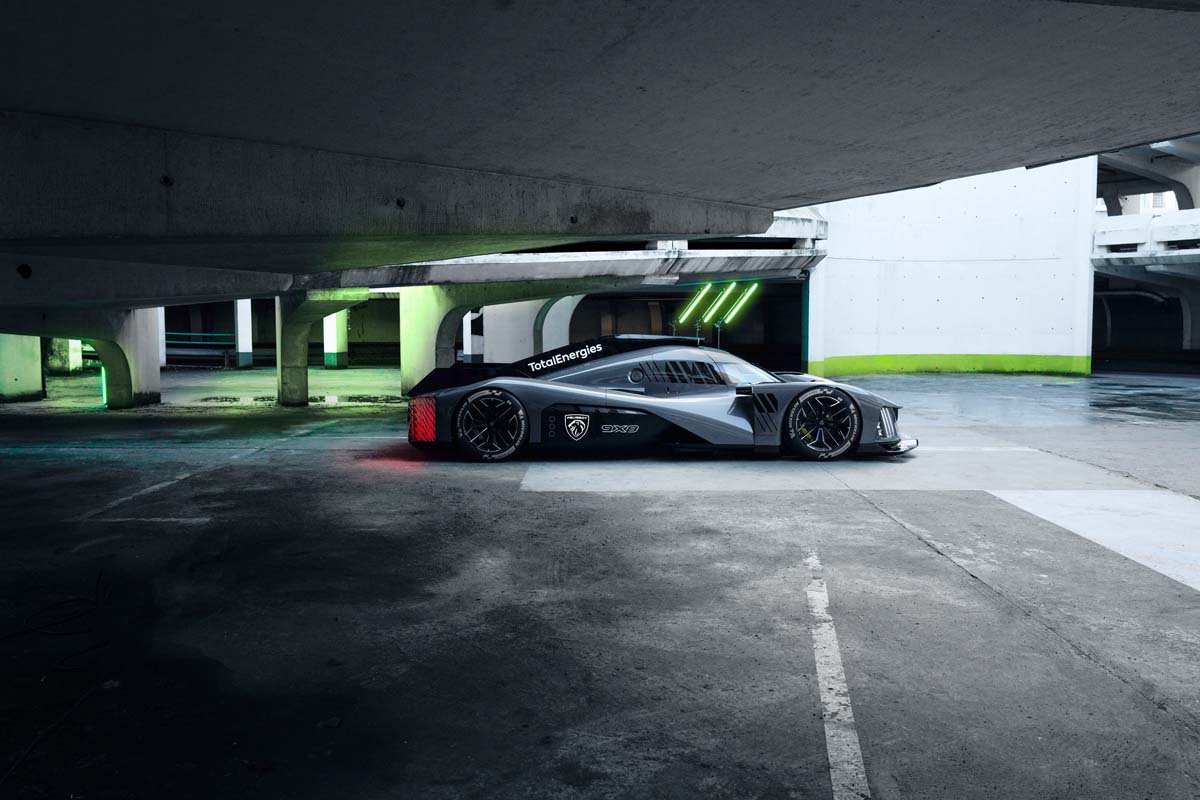 Matthias Hossann, Peugeot Style Director, placed the car amidst brutalist architecture for German photographer Agnieszka Doroszewicz to capture. According to Peugeot, Doroszewicz’s photographs, using the light and contrast of the building’s surrounds, are a metaphor for the day-night nature of the 24 Hours of Le Mans. 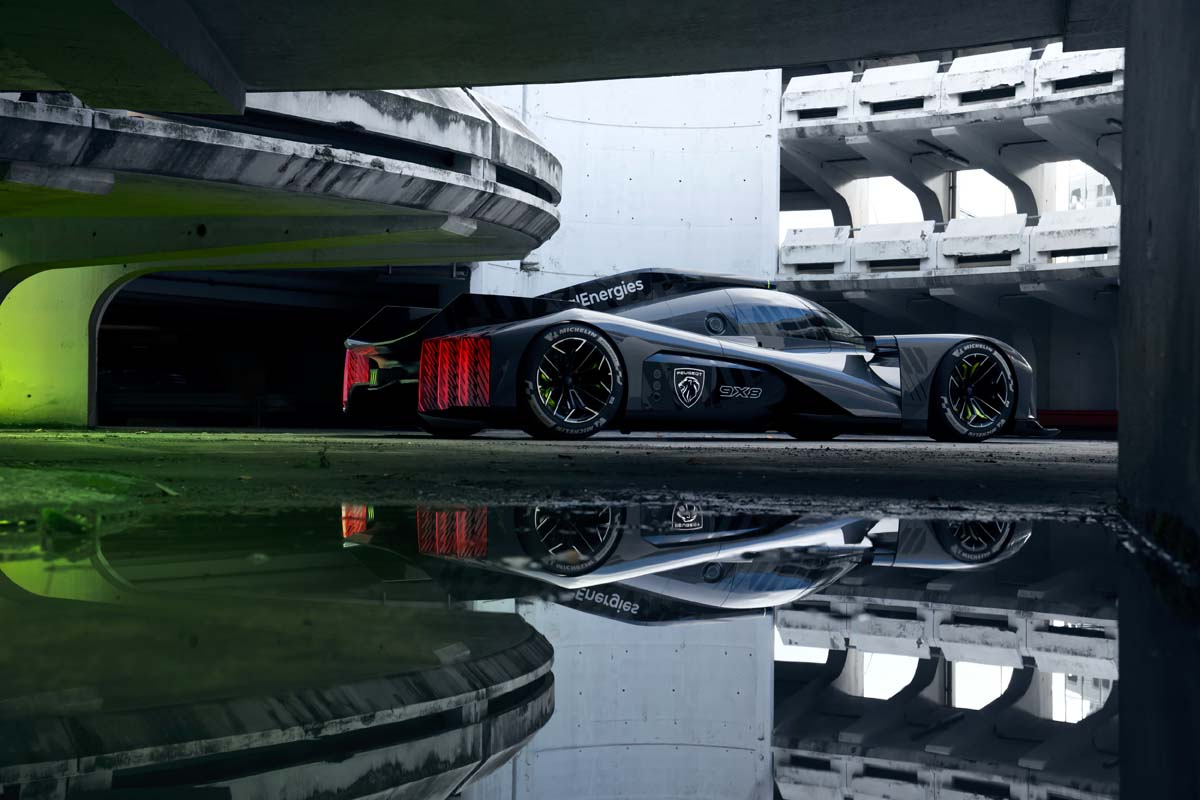 While a French hypercar at the iconic French endurance event sounds like a perfect match, the 9X8 won’t be there in 2022, as when the entry list for this year’s 24 Hours of Le Mans was released in March, neither Peugeot Sport, the Team Peugeot TotalEnergies squad nor the 9X8 was amongst the LMH (Le Mans Hypercar) class entries.

Given that around half the 24 Hours of Le Mans is held at night, making the 9X8 distinguishable in the dark was another consideration. To this end, the car’s head and tail lights are in groups of three - a current Peugeot styling motif said to be like the claws of a lion. 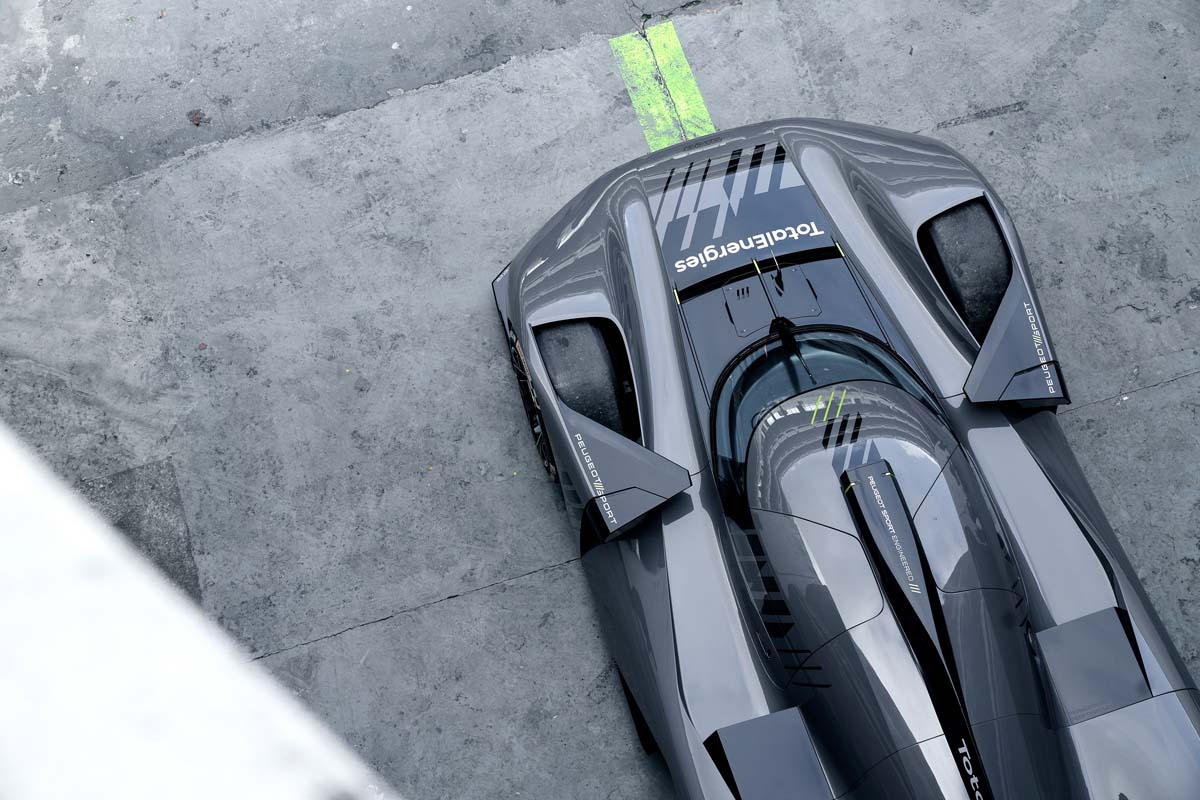 However, Peugeot have stated their intention to take the 9X8 racing this year, which leaves WEC events at Monza, Fuji and Bahrain to debut the car and establish any adjustments required under the Balance of Performance process for Hypercar class eligibility before a full WEC season assault in 2023.

If Peugeot hold their Le Mans return over until 2023, as now seems likely, it will coincide with the 100th Anniversary of the 24 Hour race. 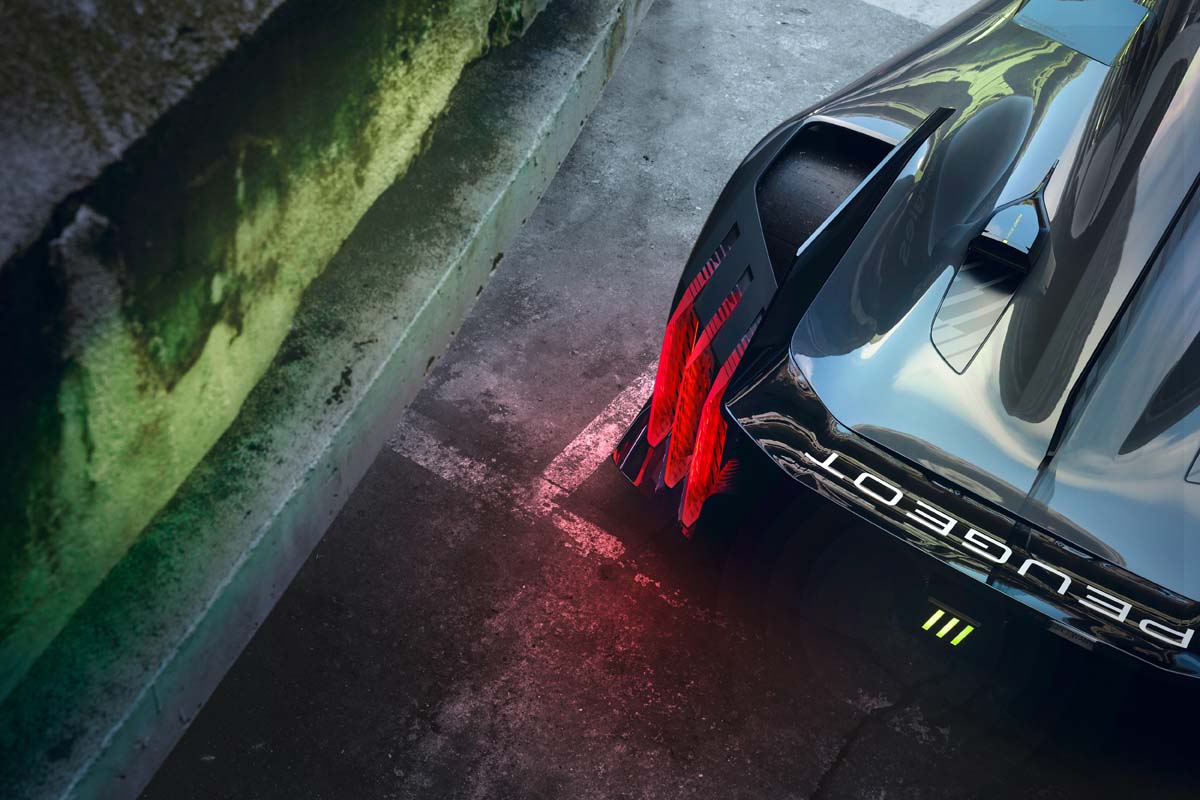 Moving back to the design of the 9X8 hypercar, the most notable element in the styling is the lack of a large rear wing, which has been a staple design feature of the prototype-class winners at Le Mans for the past 50 years.

“This configuration is permitted by the ACO/FIA Hypercar regulations,” said Olivier Jansonnie, the Technical Director of Peugeot Sport’s WEC programme.

“Our calculations and wind tunnel work have confirmed the pertinence of our decision. Along with the developments and settings this option calls for, we expect it to be validated as we test at different circuits with differing characteristics.” 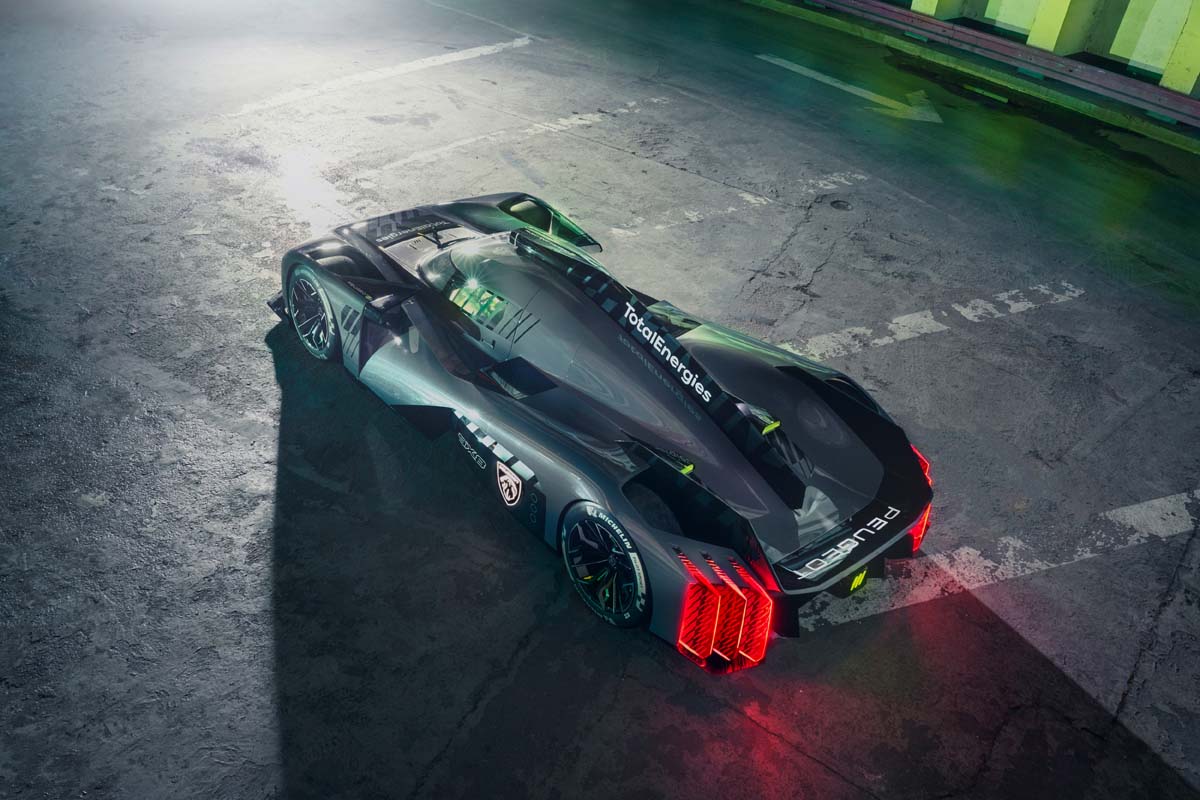 In lieu of a wing, the bodywork does feature a shovel-like treatment at the back, but most of the car’s downforce is said to be achieved through changes to the underbody, of which the LMH rules allow more freedom in design than the outgoing LMP1 category did.

LMH rules are basically defined by a minimum drag co-efficient and maximum downforce number, along with one adjustable aerodynamic device to achieve downforce balance. This means designers have much more freedom in how they achieve those numbers.

While Jansonnie is confident they won’t need a conventional rear wing, he adds that aerodynamic changes will be made if deemed necessary. This seems to have been done already, with footage of the 9X8 on test at Aragon in January appearing to show small projections added atop the rear wheelarches that aren’t present in the images shown here. 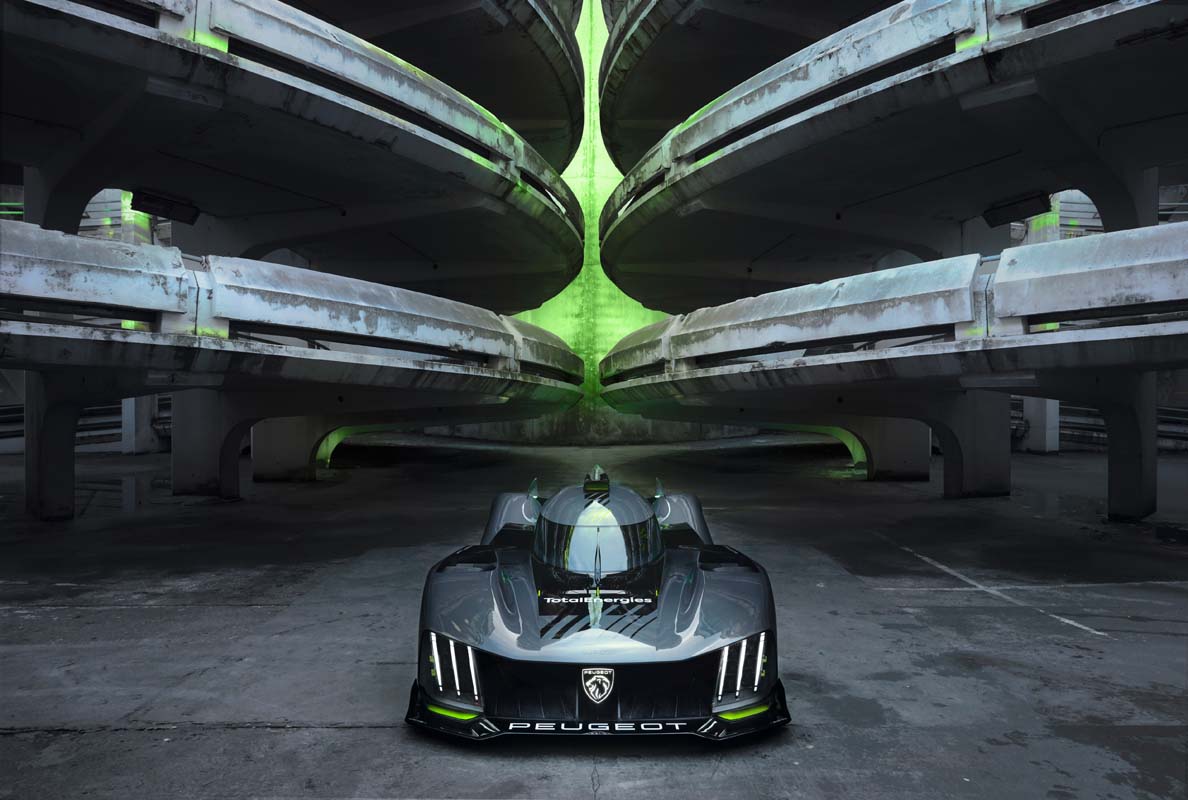 Adjustments aside, the 9X8 is described as being very much a “designer’s” car. Where aerodynamicists and systems engineers have determined the shape and style of recent Le Mans prototype and hybrid class contenders, new LMH rules have given more – but not total - freedom for designers, according to Peugeot’s Hossann.

“Guided by performance, for which no compromise was ever made, and under innovative regulations, the engineers left as much room as possible to allow the designers freedom of creativity to develop the hypercar’s design.’

“We wanted to give it a unique attitude but keep the idea of a streamlined body, which contrasts with the very geometric endurance cars of the previous generation. 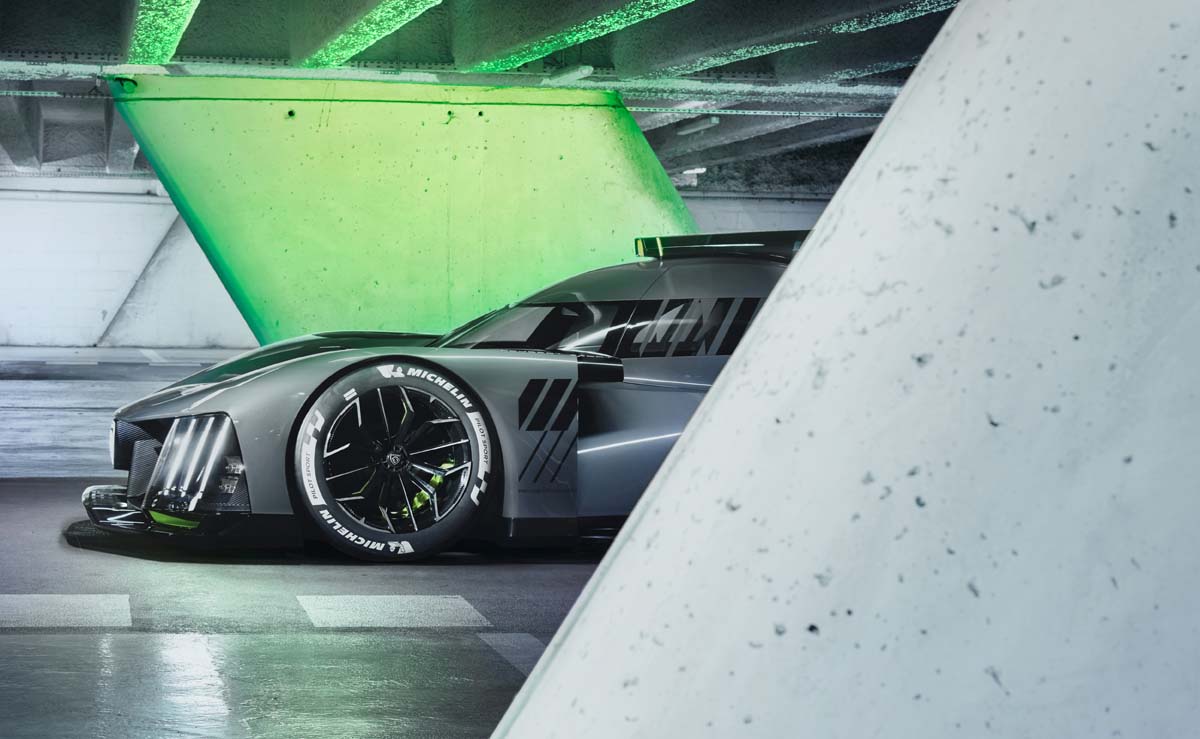 Peugeot Sport engineers worked very closely with the designers to achieve what Hossann describes as a convergence between style and technology.

“The level of discussion was absolutely unprecedented. We were in contact with the Peugeot Sport team, and really did work hand-in-hand with them.” 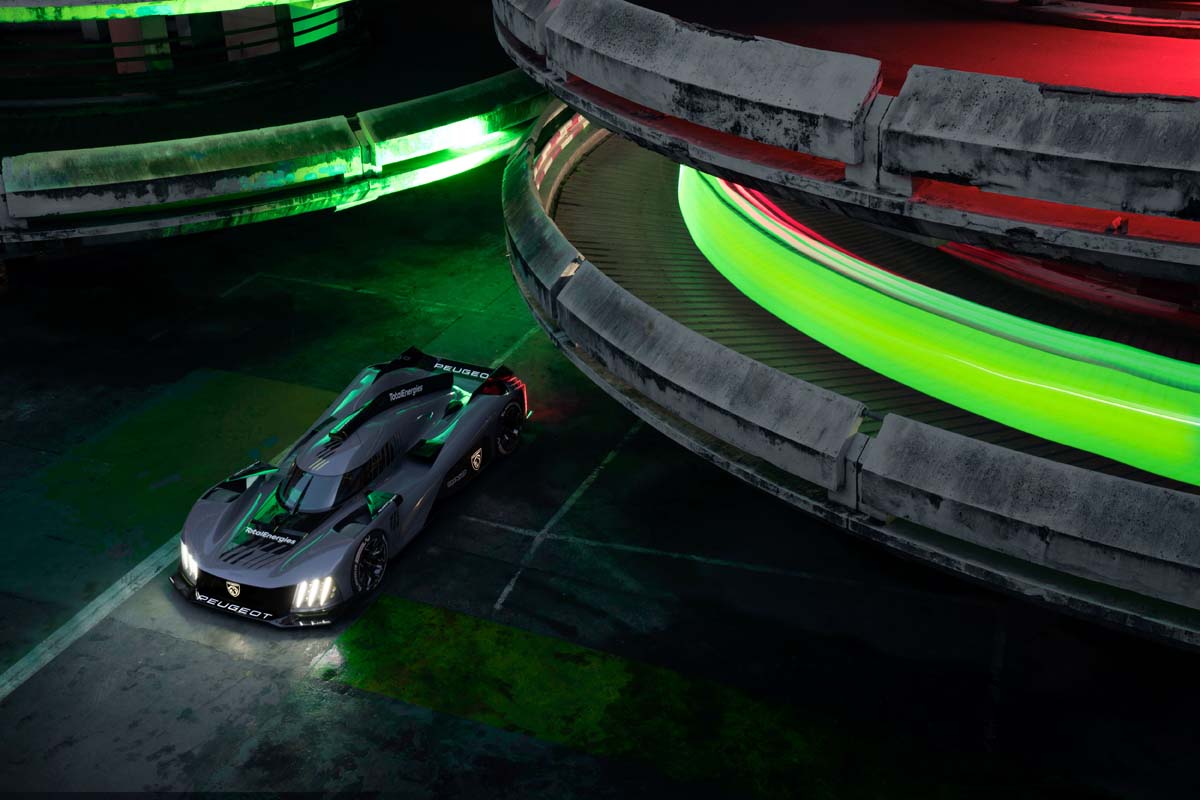 Given that around half the 24 Hours of Le Mans is held at night, making the 9X8 distinguishable in the dark was another consideration. To this end, the car’s head and tail lights are in three, a current Peugeot styling motif and said to be like the claws of a lion.

“We've integrated the three light claws in separate composite components, creating gaps through which air is extracted. We can't wait to see their effect on the track.” 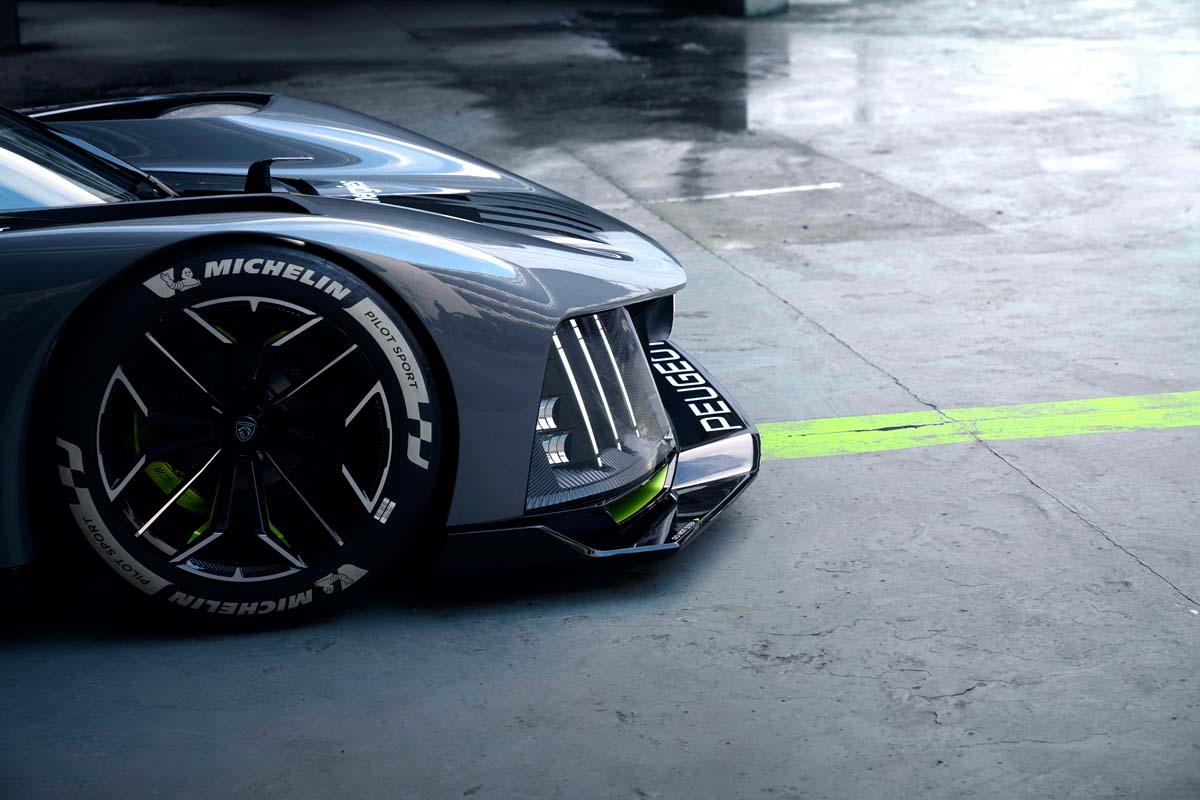 To further ensure the car could be identified at night, another element was included.

"To ensure that the Peugeot 9X8 can be easily identified day and night, we added luminous components to our work on the silhouette.” 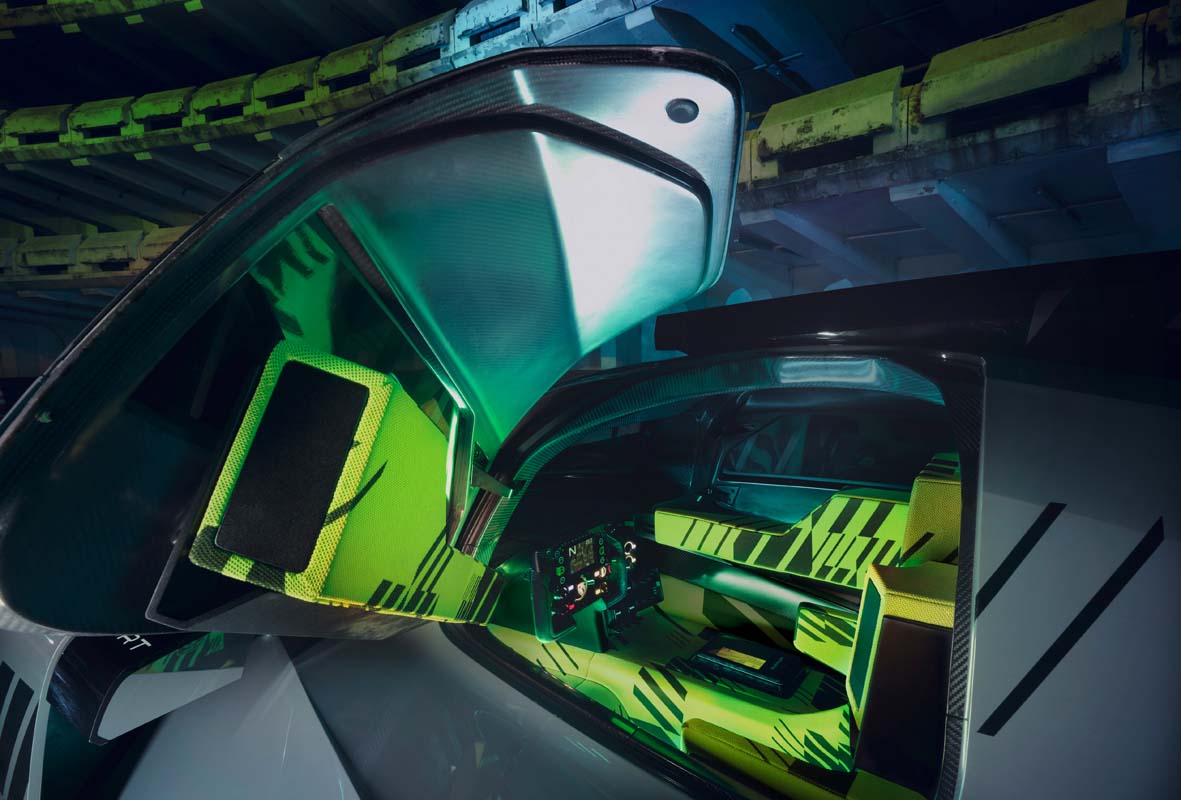 Inside the 9X8, elements of Peugeot’s ‘i-Cockpit’ concept are evident while providing what’s been described as the highest level of ergonomics and intuitiveness for drivers. 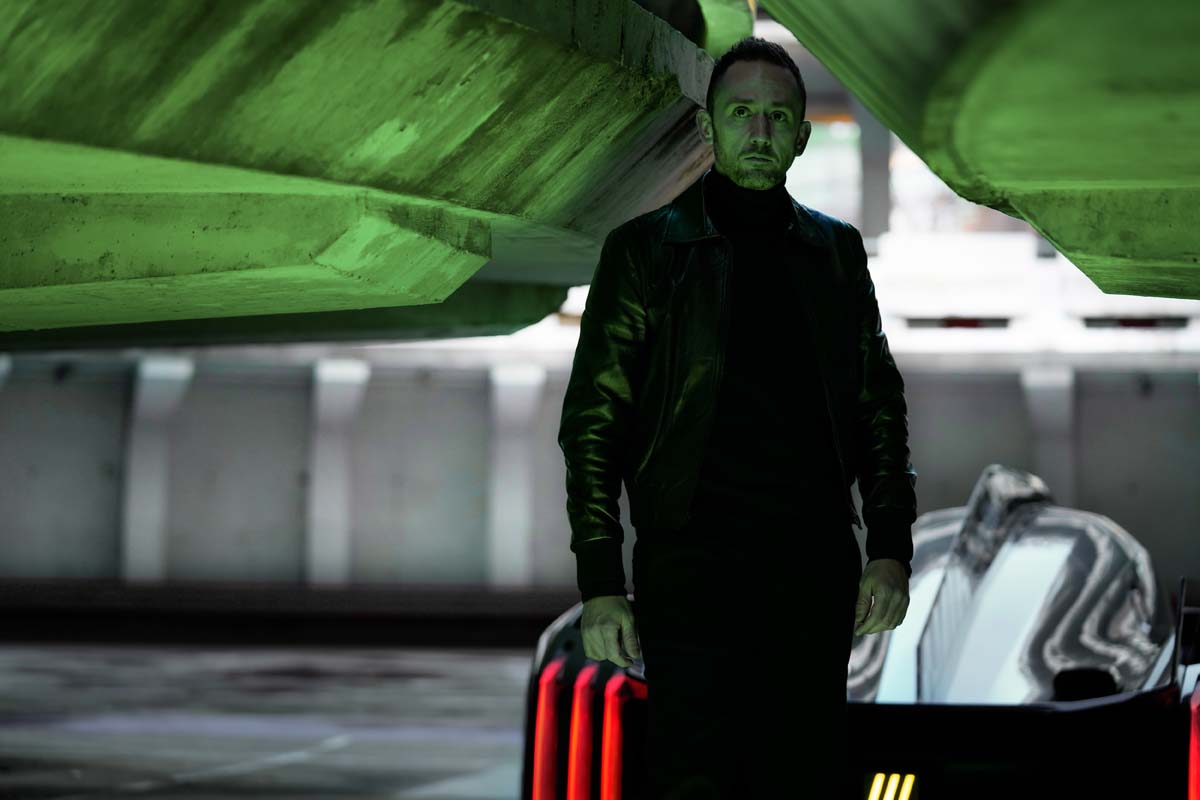 Under the 9X8’s innovative skin is a four-wheel drive hybrid powertrain, made up of a 2.6-litre twin-turbocharged V6 petrol engine driving the rear wheels and an electric motor/generator powering the front wheels. The V6 puts out 500kW (680hp) and the electric motor 200kW (270hp) for a combined 700kW (950hp).

“Endurance racing is based on rules that allow us to demonstrate Peugeot's expertise across all electric power trains,” explained Olivier Jansonnie.

“With the 9X8, Peugeot is starting a new chapter in hybrid sports cars. Performance is becoming more electric and more virtuous, without sacrificing anything in terms of competitiveness.” 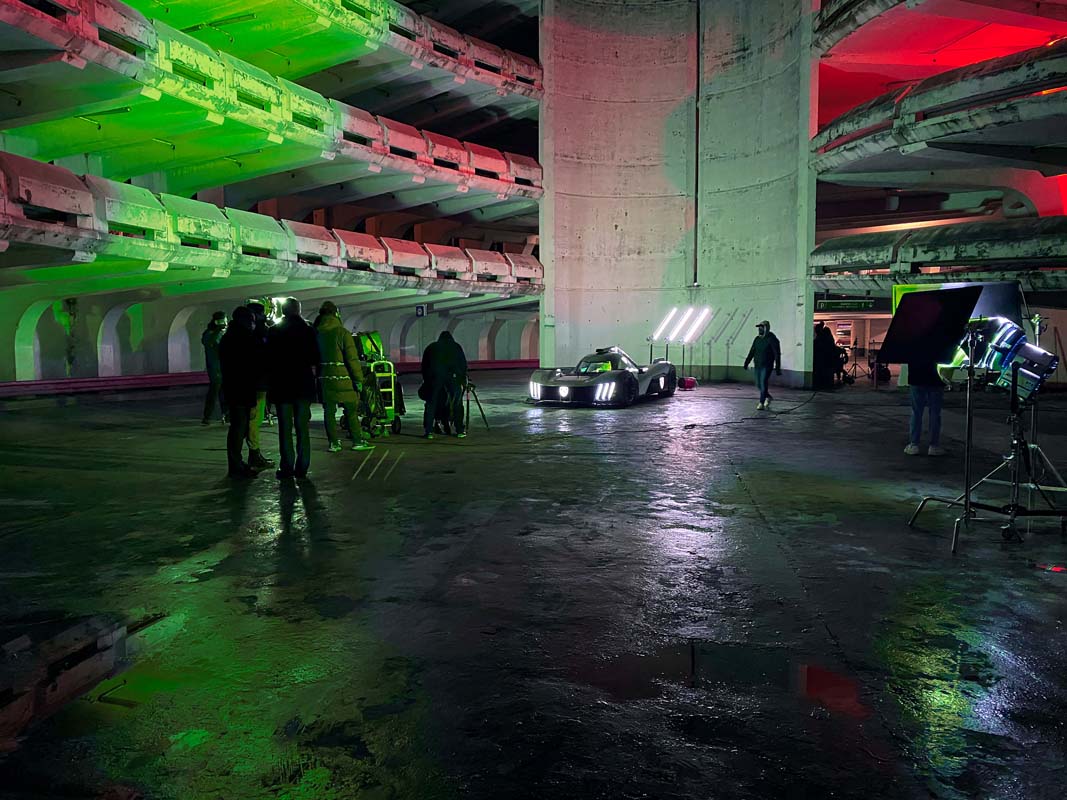 To mark the adoption of a hybrid powertrain and Peugeot’s entry into “the era of electric high-performance”, a new colour, called ‘Kryptonite’, was developed and has been applied to hybrid-powered Peugeot road cars, like the 508 PSE, as well as the 9X8.

“We wanted to signify this technological and cultural shift with a new colour signature,” Hossann explained. “We had already launched it shortly before our Hybrid Hypercar 9X8 on our new series model, the 508 PSE (Peugeot Sport Engineering). It shares many technology features with the Peugeot 9X8.” 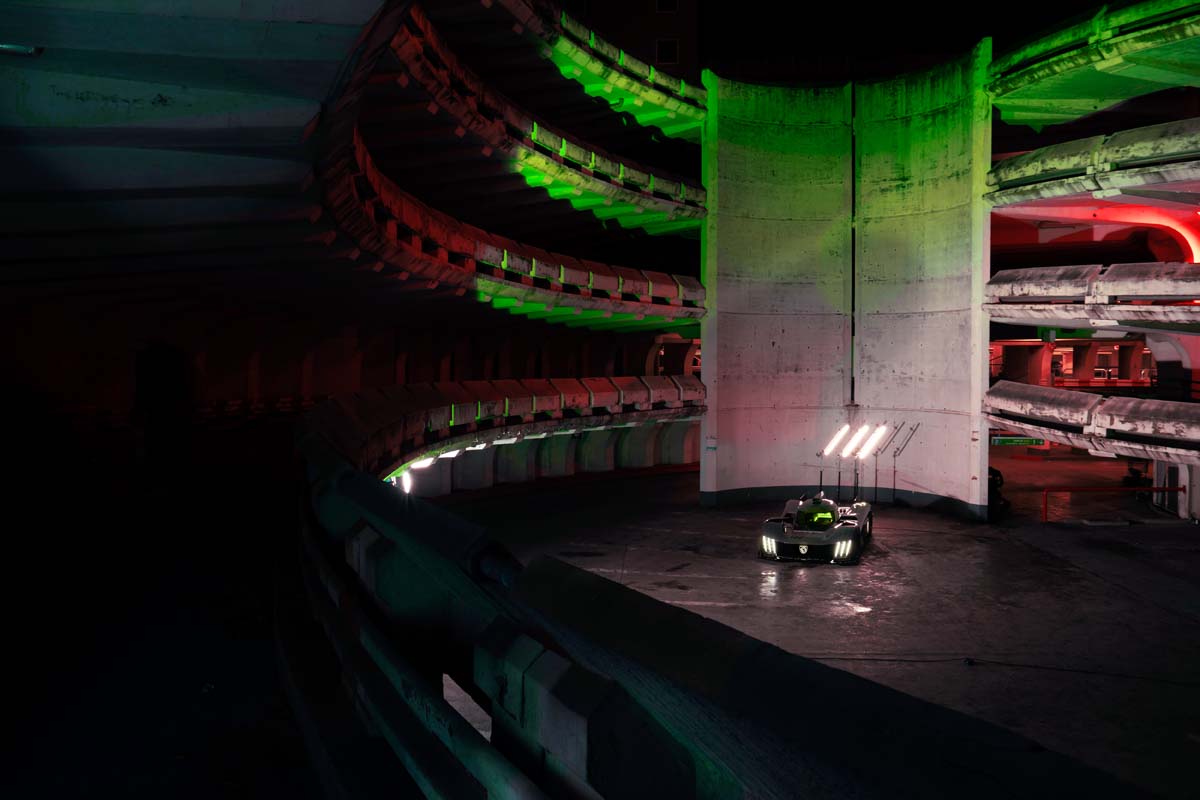 Further developments of the Peugeot 9X8 hypercar will be revealed in due course.