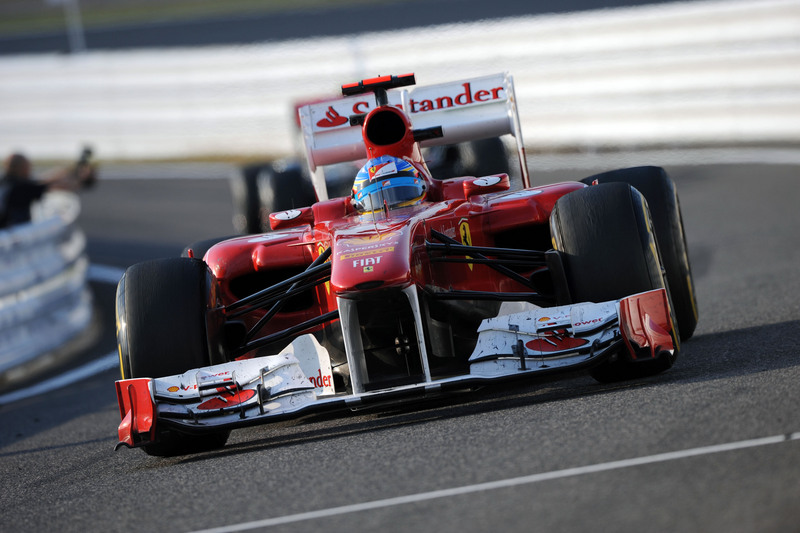 "This podium is a great motivation for the final four races of the season," said Alonso. It was a fun race, in which the strategy was very important ...
Ferrari delivered a great second-place performance in Japan at last weekend's Grand Prix rounds. Assessing the team's prospects, Fernando Alonso said that they had to aim for the podium in the remaining races of the season.

"This podium is a great motivation for the final four races of the season," said Alonso. It was a fun race, in which the strategy was very important. Unlike recent races, today we had a pace that was good enough to fight for the win. Today, we did our best and we came close to winning the race. We know that in qualifying we are behind the Red Bulls and McLarens, but in the race, when there are variables like tyre degradation, then we can exploit some opportunities. Here, the others were very strong for the first five or six laps and then we closed up to them a lot. We will try again in Korea, where we can go with our heads held high: we will try and win, or at least get on the podium again."

Alonso also congratulated the man who has taken his record as the youngest two time F1 champion.

"Congratulations to Sebastian! Winning two world titles at his age, in a season in which he has done it all - in qualifying, the races and every other way, so perfectly, is amazing and it is well deserved. For our part, we can do no more than try and do our utmost to try and beat him next year!" said Alonso.

His team-mate Felipe Massa had a more complicated afternoon, one which again saw him spend a lot of time in the company of Lewis Hamilton. The Brazilian brought his 150º Italia home in seventh spot after a gritty performance.

"Once again I finish a race with a very bitter taste in my mouth," said Massa. Today, our pace was good enough to finish on the podium, as Fernando demonstrated, but instead I am here commenting on a seventh place. It's a real shame. The contact with Hamilton? My car was definitely damaged by it: when I looked at it after the race, I saw there was a bit of the front wing endplate missing and the floor was not on properly on the left hand side and I could feel it in the way my car was behaving. I think the footage speaks for itself: he was struggling with his tyres and I had almost come alongside him and for no reason, he moved over and hit me. I let you be the judge… It's pointless for me to say any more about it. However, I do want to congratulate Sebastian Vettel: he is a great guy and deserves this title and I am very happy for him."

Jenson Button took his third win of the season for McLaren, while Sebastian Vettel took the last step on the podium, which was enough to give the Red Bull driver his second consecutive Drivers' World Championship title.

Perfect conditions, a huge crowd, it was all looking set for a great afternoon of motor sport in Japan as the lights went out for the start of the Japanese Grand Prix. From pole Vettel's Red Bull forced Button almost onto the grass, which allowed Hamilton in the other McLaren to go second ahead of his team-mate. Behind them in grid order came Felipe and Fernando, followed by Webber, Schumacher, Di Resta, Sutil with Petrov tenth.

Lap 6 and Fernando dived inside his team-mate going into the first corner to move up to fourth, making use of the DRS zone and Fernando was now just under 3 seconds behind second placed Button. In sixth spot, Webber was half a second behind the Brazilian Ferrari driver. Lap 8 and Button moved ahead of Hamilton who immediately came into the pits to change tyres and Sutil in the Force India also came in on the same lap from ninth.

The race leader Vettel pitted on lap 9 as did Schumacher in the Mercedes. Button, Alonso, Webber and Di Resta all came in together on lap 10, with Felipe pitting from his temporary lead on lap 11, followed down pit lane by Buemi, but the Toro Rosso driver ended up parking the car at the side of the track as his right front wheel came off shortly after leaving the pits.

The run of pit stops at the front meant that while the top three order was Vettel, Button and Fernando, Hamilton had got ahead of Felipe, pushing the Brazilian down to fifth. Button built his win on a better second pit stop than the German Red Bull man when they came in on laps 20 and 19 respectively. Shortly after, as Felipe tried to get ahead of Hamilton, the two cars touched when the Ferrari was alongside the McLaren. It looked as though Hamilton moved across on his rival and they collided. A front wing end plate and the floor were damaged on the 150º Italia and a piece of debris from the Ferrari lay in the middle of the track which brought out the Safety Car for a while. From then on, Felipe's car never handled as it should and the Brazilian struggled from then on. Webber got ahead of the Hamilton-Massa duel to go fourth when he made an earlier pit stop and the McLaren man got past Felipe going into the first corner on lap 37. The run of pit stops also saw Schumacher get his Mercedes ahead of the Brazilian. Also on lap 37, Fernando made his third and final pit stop and having gone longer than his rivals, this put him back on track ahead of Vettel to give the Ferrari man second place. In the closing stages, Fernando appeared to be closing on race leader Button, partly because the Englishman had been told to back off to save fuel, but in the last part of the 53 lap race, the positions between the top three stabilised to the chequered flag. Fernando is still third in the Drivers' championship with Felipe sixth and the team remains third in the Constructors'. Behind the podium trio, Webber was fourth, followed by Hamilton and Schumacher, while eighth behind Felipe came Perez, the remaining points going to Petrov ninth and Rosberg tenth.

Winning again is still on the list of targets for the Scuderia and trying to do just that starts again in only a few days, with Friday's free practice sessions for the Korean Grand Prix.

"First of all on behalf of the Scuderia, I wish to congratulate Sebastian Vettel on clinching his second Drivers' title: he has had an incredible season and this fantastic result is well deserved!" said Stefano Domenicali, Ferrari Team Director. "As for us, I don't think it's out of place if, for the second time running, I use the adjective amazing, this time to describe Fernando Alonso's race today. Our driver was always on the attack and came very close to a win which would have been incredible, given our performance two weeks ago in Singapore. All these changes of fortune in terms of who is competitive, confirm once again how hard it is to understand as well as possible the real performance of the car-tyre packages at each track. Felipe was also having a very good race, at least until the contact with Hamilton: the damage his car suffered in this incident probably penalised him excessively in the second part of the race. There are still four races to go this season, in which we will do our utmost to achieve the objectives that are still within our reach: winning again, taking Fernando to second in the Drivers' classification and learning as much as possible from this car with a view to 2012."