One of ten coupes being auctioned through Grays.

Grays have secured a true rarity for their latest classic car auction in the form of a Leyland Force 7 coupe, which went up for bidding on 14 May.

Virtually unheard of today, the Force 7 was intended as a two-door spin-off from Leyland’s P76 sedan, in much the same way that Holden, Ford and Chrysler had done with the Monaro, Falcon hardtop and Charger. Where the Force 7 differed is that it offered an opening hatchback, one of the first on an Australian-made car. While the hatchback made rear access easier, a folding back seat created a huge storage area.

The Force 7’s styling (with input by Michelotti in Italy, but mostly a local design) showed influences of the P76, but the coupe shared no body panels with the sedan. It did feature the same running gear and other mechanical parts, though, including a choice of 2.6-litre six-cylinder or all-alloy 4.4-litre V8 engines, as well as 3- and 4-speed manual and 3-speed auto transmissions.

Leyland’s initial plan was to offer the coupe in three trim levels: Force 7 with the 2.6 and a 3-speed column manual; Force 7V with the 4.4 V8 and 4-speed floor shift manual; and the Tour de Force, with the 4.4 V8, floor-shift 3-speed auto and more luxury trim inside - like a Holden Monaro LE or Ford Landau. A performance version to homologate the Force 7 for touring car racing was also mooted.

All of Leyland Australia’s plans for the Force 7 came to naught, though, as the parent company in the UK was haemorrhaging money and decided to heavily prune the Australian operation, closing the Zetland plant at the end of 1974 and ending P76 production before the coupe could be released. When the axe fell, less than 60 Force 7 bodies had come off the line at Zetland and it’s believed only one of those – the car being auctioned - had been completed and registered.

Rather than finish all 60-odd coupes and offer them for sale to recoup some of the development costs, Leyland Australia allegedly made a decision to complete only ten cars, all to Force 7V spec, and crush the remining bodies. One went to the National Motor Museum in Birdwood and another to Leyland HQ in the UK. The remaining eight were to be offered at auction, Leyland reasoning that the rarity would make them more desirable. 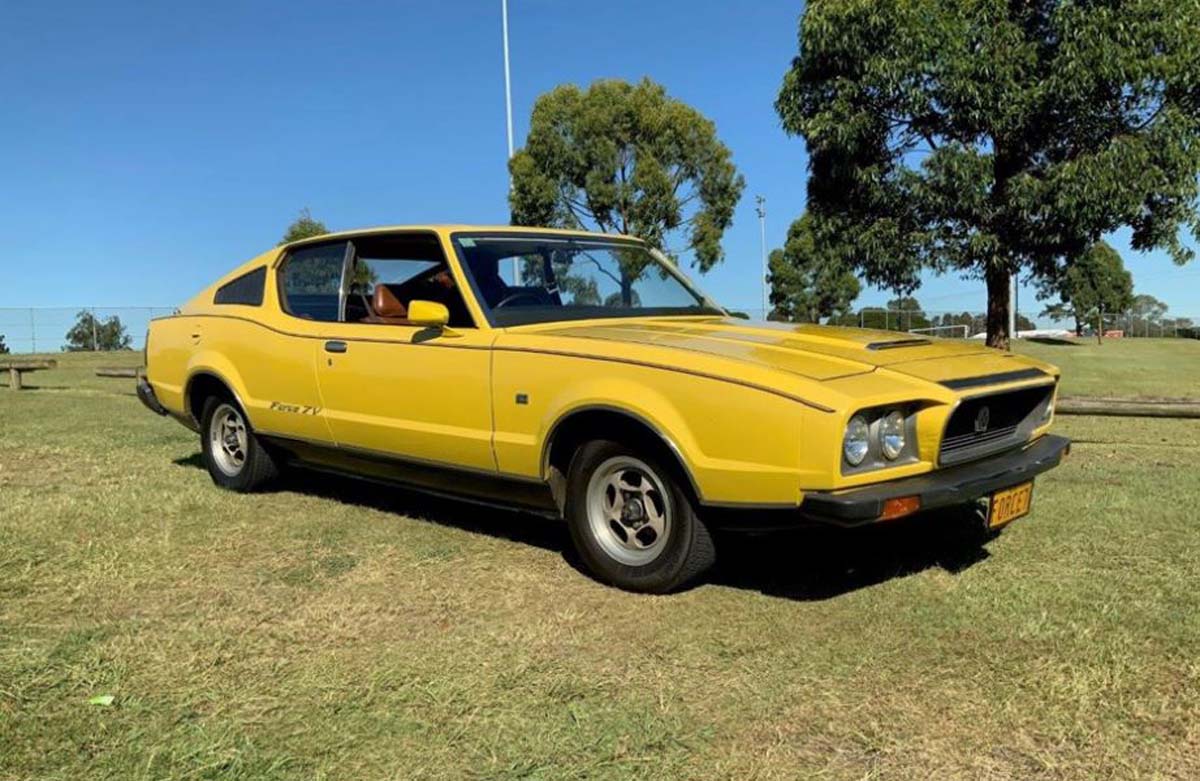 The plan backfired and instead of the $30,000 to $40,000 that Leyland expected each coupe to make, they sold for less than $10,000 each. Put this down to a number of factors, including the tainted reputation that Leyland had earned by this time, the relative failure of the P76 in the market and the long delay – almost a year – between the end of Force 7/P76 production and the actual auction, by which time all but the most devoted enthusiast had forgotten about the Force 7.

Most of the buyers at the auction (which was conducted by Grays, coincidentally) were just such enthusiasts, so all eight coupes found good homes. It also meant these cars have rarely come on the market since, so the appearance of this one at auction is a rarity.

Documentation presented by Grays shows this Force 7V, finished in Bold as Brass paint with brown vinyl interior trim, and equipped with a V8 and automatic, was originally registered to Leyland Australia (HBR 278) and was the only Force 7V registered ahead of the 1975 auction. The car was well optioned, with power steering, air conditioning, an AM radio with electric aerial and dual exhausts all fitted. Originally serving as Leyland’s engineering and product development vehicle, it had covered just over 11,000kms before the auction.

The car’s first private owner, Warren Wright, purchased it at the 1975 auction and, according to the documentation provided, only received NSW Motor Registry approval to register the car in 1981 (the cars carried no compliance plates, complicating the registration process, but all have since been registered). The car’s next owner purchased it from Wright’s estate in 1990 and has owned it ever since. Whether Wright or the current owner added the personal ‘FORCE7’ NSW plates is unknown.

Both private owners have kept this Force 7V in remarkably well-preserved condition. It has not been restored, with only the rear shocks, brake master cylinder, mufflers and the usual consumables replaced. As consigned, listed mileage is 28,751km.

Leyland Australia documentation provided with the sale includes log books showing service history, a company car pass and company instructions for the driver to present in case they were pulled over by the Police.

With only eight Force 7V coupes in Australia, two of which are in museums, a vehicle this rare is unlikely to come up for sale again anytime soon. No pre-auction estimate is listed, but the reserve appears to be in the $350,000-$400,000 range.

Bidding on this 1974 Leland Force 7V opened on 14 May and closes on 25 May – see Grays Online for bid closure times for individual lots.