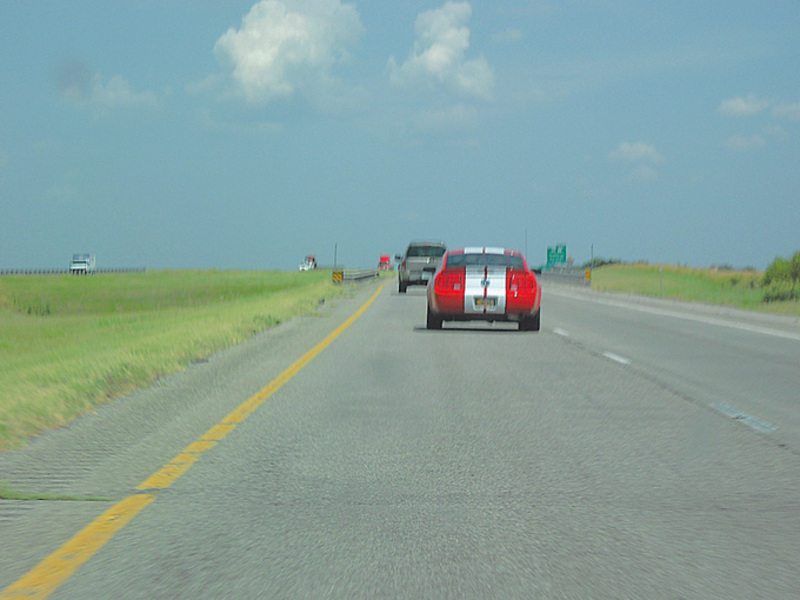 On arrival in Los Angeles (LAX) Hertz supplied the Mustangs . Most were near new convertibles cars with several 2009 45th Anniversary models. Off to the Marina Motel at Venice Beach that allowed time to refresh before heading to Santa Monica Pier and a night at Bubba Gump's seafood restaurant where everything went well seeing there were so many excited Aussies giving the bar staff some cheek. Next morning the assembled 66ers started their first drive along the Santa Monica section of Route 66 heading through Beverly Hills. Some got lost after the first right hand turn. There were calls from the 'electronically challenged' folks for help , which was happily given.!!! All cars were equipped by American Dream Route 66 Cruises with Aussie flags, 2 way radios, Route 66 specialty maps plus the GPS units.

The first nominated stop was to see the Tepees at the Wigwam Motel at Rialto near San Bernardino. In San Bernardino where McDonald Bros first established their Burger Chain (the Golden Arches) many years ago is a tribute to the history of Route 66 in the restaurant along with the journey of McDonalds over their early development years. Next stop was Victorville, providing a great California Route 66 museum and shop that is worth a ½ hour stop. The Museum guys at Victorville, have a handy guide to local 66 hot spots, past and present as a free handout sheet is available, worth the effort to ask for one, as you buy the EZY Route 66 Guide book written by Jerry McClanahan. That's GOLD!! Historic Barstow called for a "diner stop" at one of the many traditional eateries that have retained the character and service of the era. The neon is still alive among the Barstow 66 strip of businesses The gamblers in the group left Barstow for the Las Vegas experience and a night on the town, with Circus Circus providing the venue base. Next morning the group was off to a flying start with some going to the Hoover Dam and others to Needles CA .

As darkness falls you arrive at Kingman for an overnighter at one of many character motels that line the strip. Near the Santa Fe Rail-yards there is a US 66 sign in the middle of the road worth a stop for a photo. Travelling back to Oatman from Kingman is a worthwhile journey . The town that has withstood the test of time, staying unique in its Gold Rush character, whilst surviving on tourism. The roaming Donkeys (buy carrots to feed ém) on Main St (after 10am) and various special events keep the town going. Wild Willie puts on a shootout in the street to raise money for a children's charity, You can buy lifelike replica six guns in Oatman complete with holsters and bullets. They look so real, the locals don't ask, they shoot first. We journeyed along Route 66 the Hackberry Store which is a must do stop. The owner John is there weekends and has memorabilia galore and some special wall murals wall papering the loos Staying at Holbrook overnight in the tepee style motel rooms that are surrounded by old unrestored cars from the fifties and sixties with our 2009 Mustangs parked amongst them was surreal. The owners are old school country people who try and retain the charm of a bygone era right on the heart of Route 66

The same goes for the Lewis Antique Auto Museum in Prewitt, NM where there would be $3million worth of old tin sitting under the desert skies, as well as restored rarities sitting in a shed at the side of US 66. This site is about 60miles east of Gallup NM where we were drawn to the 'famous 50's Hotel site El Rancho that is a must see stop and lunch break. By now we had been on the road for five days and the groups' characters had begun to rise to the surface. We had Mad Max in trouble with the Las Vegas cops , the WA sandgropers had a difference of opinion with the local laws radar unit , relating to the operational speed of their Mustangs ,all to no avail , book em Danno , part of the fun of driving The Mother Road. In Texas Lone Star state we stopped at the Cadillac ranch (mandatory) as well as an evening stay at the Big Texan Motel where we had an entrant in the Free 72oz steak(nearly 3kg) eating contest which has to be consumed in 1 hour as the house rule goes. Don, our Aussie starter had been in training since Las Vegas and had eaten his way across the USA. We all chipped in for the $65 entry fee (smart marketing) and Don was off, only calling a halt at the 45 minute mark due to the salty gravy (sneaky) that was all over it. Don ate the steak, but could not eat the sides. Game Over!!

Travelling further eastwards we came into contact with some great Route 66 Historians which was by way of an arranged meeting in Chandler OK for our group, at the Armory Route 66 Interpretive Centre. What a venue, you lay prone on a double bed and watch a video presentation of the road and physical changes amongst other exhibits that have been captured over the years ,in a well designed spacious layout. Jim Ross of Ghost Town Press, publisher of the Route 66 map series and Jerry McClanahan author/ illustrator of the Route 66 Ezy Guide , along with Shellee (a US66 photographer) attended the Armory centre especially. They gave us a firsthand talk of their experiences and knowledge, making up a milestone of the Mother Roads history and changes. We exited Route 66 in Tulsa OK for Memphis TN to see Elvis, the King, on the anniversary of his passing at Graceland's for Elvis Week. A live concert on the lawn of Graceland's was phenomenal. The movie Jailhouse Rock followed on a big screen .The Beale Street Blues area later on in the evening was a buzz for a Monday night .Moving forward to Nashville where we stayed for 2 days, allowed people to see Jack Daniels Distillery, Corvette Museum at Bowling Green Kentucky along with all of the music venues in Main St and Broadway in downtown Nashville

As the first crew left Nashville to fly home, the new batch of 66ers arrived for the reverse trip back to LA. I changed some of the venues according to different interests and tastes. Nearly 100 travellers on both journeys enjoyed Route 66 and took away something special for their memories. The 2009 dates start with Australian Departures on the 11th August 2009 so we take in the Route 66 Festival event in Williams AZ the following weekend, for a great Kick Start to the fun. In 2009 we are ready for a larger number of participants and new cars along with a wider range of terrain as we travel through the Best of Route 66i. Check out our website www.route66drive.com.au for full booking and trip details. Thanks for Listening and have fun.