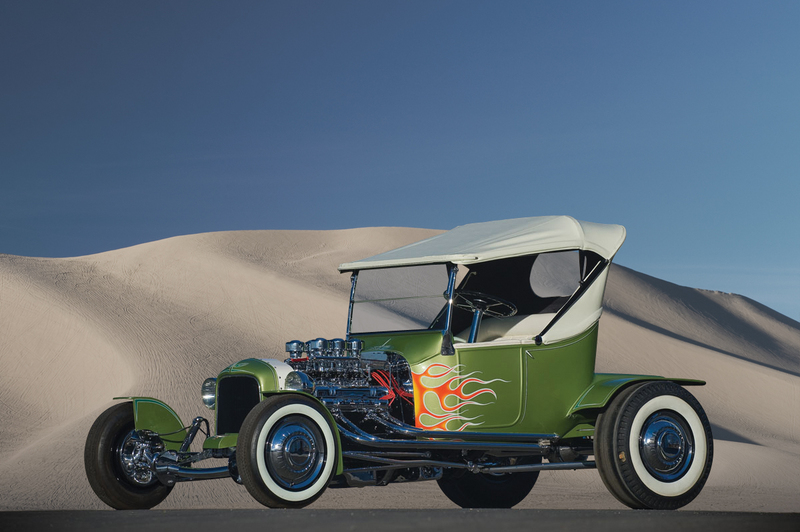 Markiecki, of Toledo, Ohio, spent more than a year and US$3,000 (big bucks in 1961!) creating the Trojan. Bar the upholstery and paint, Markiecki did all the work himself
Built in 1961, restored in 2006, Harry Markiecki's multiple trophy winner, the "Trojan" Ford T bucket rod, will cross the blocks as part of Auctions America by RM's Auburn Fall auction in the US this coming September 1- 4.

Markiecki, of Toledo, Ohio, spent more than a year and US$3,000 (big bucks in 1961!) creating the Trojan. Bar the upholstery and paint, Markiecki did all the work himself. The time and expense paid off, as the T bucket went on to win numerous shows and awards. "Trojan" graced the covers of multiple US magazines, with Hot Rod calling it a "Space Age 'T'" and proclaiming, "Harry Markiecki's updated 1916 Ford missile has conquered 18 trophies in 7 showings, including 6 Best of Shows".

A decade after its creation, Trojan was acquired by Chester Cary of Lima, Ohio and was later purchased by noted US car collector, Mike Guffey. In 2006, Ralph Whitworth bought Trojan and treated it to a comprehensive, nut-and-bolt restoration at his 'Flying A Garage' in Nevada. After completion, the immaculately-restored Trojan was invited to the 2009 Detroit Autorama, where it was displayed alongside the Orbitron, Outlaw, Dream Rod and other famous historic show rods. In the new millennium, Trojan continued its winning ways with a Best in Class award at the Autorama, as well as "Terrific T" and Excellence Awards at the Good Guys Hot Rod Show in Del Mar, California. With that sort of success, Whitworth's restoration was obviously show quality in every respect, and true to Markiecki's original vision.

Trojan's engine is a gleaming 322 ci Buick Nailhead V8, topped by a Weiand Drag Star intake manifold with six Stromberg 94s, mated to a Dynaflow transmission. The body is correctly finished in Lime Fire metallic green with black and white pinstriping and the traditional period yellow/orange flames. The rear deck showcases Markiecki's metal working abilities with the fusion of a '58 Ford decklid and a'59 Chevy bonnet, which was also used to create the fenders. Taillights are from a '58 Chev Impala and the chromed headlights came off a tractor!

Other notable features include a cut-down '32 grille shell, white overstuffed Naugahyde upholstery with a matching folding top. Black painted steelies sit at all four corners with Dodge Lancer hubcaps, wrapped in Firestones in front and Hurst slicks on the back. The chrome is certainly one of the most impressive aspects, as it graces everything from the engine compartment to the banjo rear end. The overall presentation and quality is nothing short of stunning. 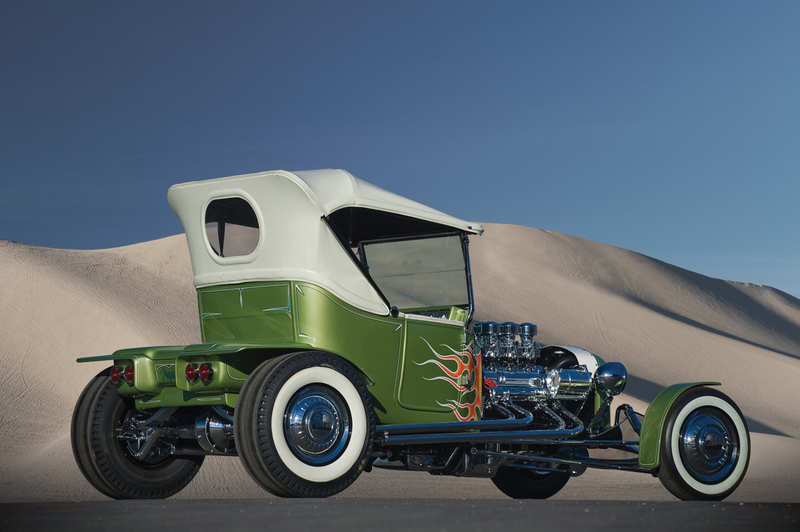