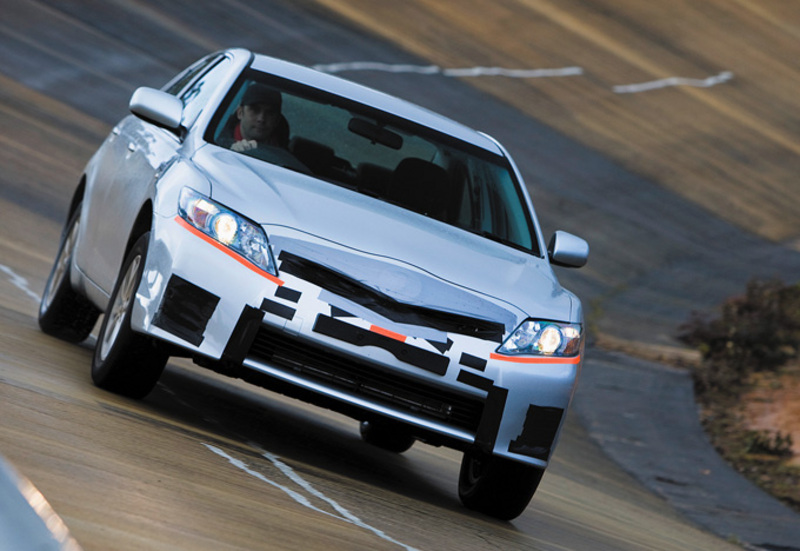 To be built at the company's Altona plant in Melbourne's west, the pilot production phase will see production of a small batch of vehicles to test all its processes, parts and assembly methods.
Full scale production will start in December and the Camry hybrid will arrive in Toyota dealer showrooms in February next year.
Like the Toyota Prius hybrid, the Hybrid Camry has a specially designed four-cylinder petrol engine that works in tandem with an electric motor. The combination boosts performance, reduces fuel consumption and cuts emissions.
The car's petrol engine automatically switches off when the car is stationary or when it is coasting or traveling downhill and again like the Prius, the Camry recharges itself as it drives along.
Energy that would normally be lost during braking or coasting is converted to electricity and stored in a sealed battery to be used when required, and in fact both the Hybrid Camry and the Prius can be driven for short distances on electric power only.
During the three month quality assurance test program, Toyota's engineering team will have up to 20 vehicles available.
Initial testing will occur at the Australian Automobile Research Centre near Anglesea, Victoria, where Toyota has a purpose built ride and handling course.
Long distance on-road endurance evaluation began in the middle of September and will continue till volume production begins.
The three month trial is being managed by Toyota's Quality Control Division and operation manager for the company's locally manufactured models Phil King, says hybrid technology has integrated most effectively into the local Camry production process.
Development and tuning of the new hybrid's steering and brakes have occurred under the supervision of Toyota Technical Centre Australia (TTC-Au) -- a Melbourne based subsidiary of Toyota Japan.
King says that in response to specific Australian requirements, TTC-Au engineers have given brakes and steering a solid and direct feel.
"Locally built Camry and Aurion have created a benchmark and initial indications are that Hybrid Camry has already met that standard," he said.
TTC-Au development has been under way for more than a year in a range of Australian locations and conditions.
King says the final three month tuning program for the suspension, brakes and handling response would confirm goals that would further enhance the benchmark.
He says the Hybrid Camry program has been unusual because it is starting from a well established base with current Camry.
"The previously established parameters - particularly for suppressing noise, vibration and harshness - have made targets far easier to reach with the new model," he explained.
Toyota engineers say the hybrid drivetrain, a motor generator added to the front and the hybrid battery in the rear, have combined to create exceptional front-rear balance.
Phil King says the hybrid system in itself has not created an issue and its integration has been seamless and its driving response outstanding.
"Field evaluation is suggesting the combination of four-cylinder petrol engine and powerful electric motor is providing six-cylinder like performance with far greater economy," he said.
Toyota Australia chief Max Yasuda says the company leads the world in hybrid vehicles and is committed to remaining at the forefront of innovation and environmentally friendly technology.
He describes the introduction of hybrid technology in Toyota's local manufacturing was one of the most significant developments in the company's 50 year history in this country.
Toyota plans to produce at least 10,000 Hybrid Camrys a year for the domestic market and 300 more for export to New Zealand.
Ian Crawford.