‘A-Team’ van going to auction in US

‘A-Team’ van going to auction in US

An authentic, licensed replica of the van used in hit TV show ‘The A-Team’ is going to auction in the US with Worldwide Auctioneers. 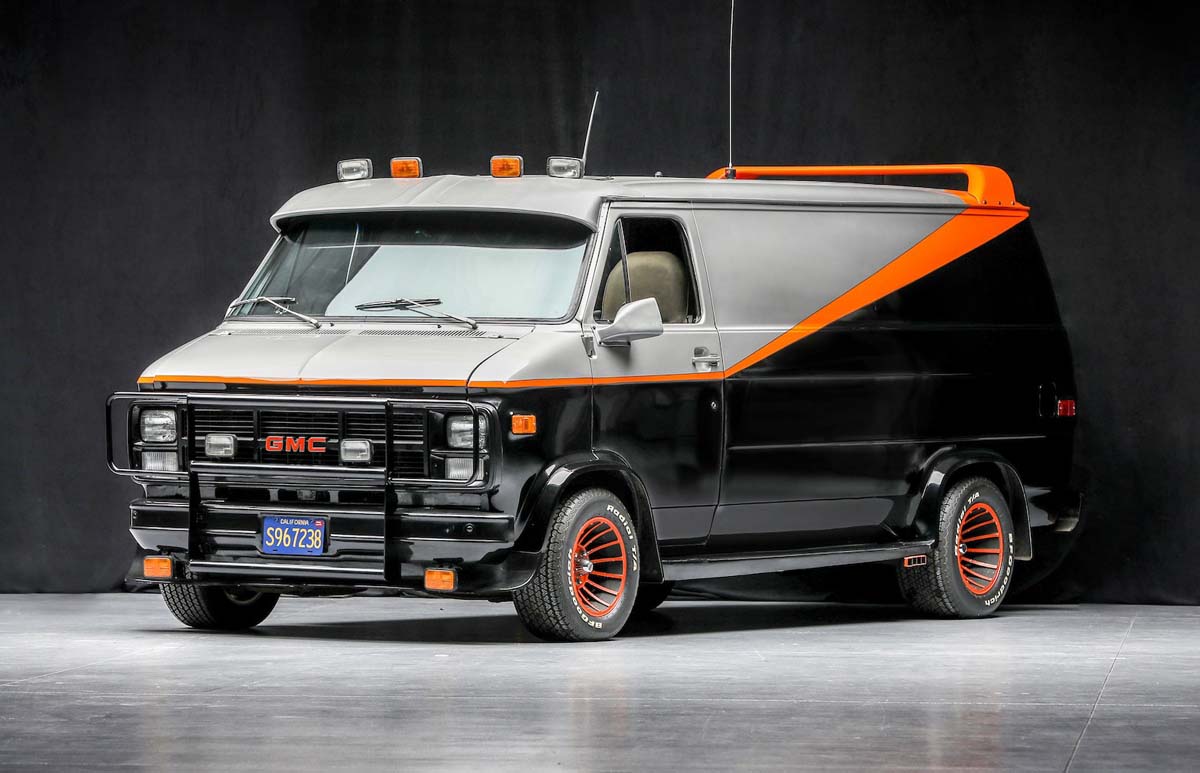 Along with The Dukes of Hazzard, Miami Vice and Magnum PI, The A-Team was one of the most popular weekly action-adventure shows from the ’80s; so much so it was rebooted as a big budget movie in 2010.

Starting in 1983 and lasting five seasons, The A-Team saw its cast, that were “sent to prison by a military court for a crime they didn't commit” and “escaped from a maximum-security stockade,” engage in all sorts of adventures as soldiers of fortune in “the Los Angeles underground”.

The van, B.A.’s 1983 GMC Vandura, was defined by its black and metallic grey finish with a red stripe and matching turbine-style mag wheels. Beyond its custom paint job, the Vandura also featured front and rear spoilers, a bullbar, foglamps, roof-mounted spotlights, side-exit exhausts and a sunvisor.

Inside, the van was a rolling arsenal, with all manner of weapons on show and ready to go, while other equipment included police scanners, a CB radio, recording equipment and even a printing press (this was the ’80s, remember!).

Multiple variants of the van were built for the series, based on GMC and similar Chevrolet models, from finely detailed examples for close-ups to rough units used for stunt work.

The instant popularity of the A-Team saw Universal Studios commission Hollywood Productions Inc. in 1983 to create a series of six replicas to send to car shows, county fairs, charity events and other gatherings to promote the show. A mix of Chevrolet and GMC vans were sourced by Hollywood Productions Inc., but as the TV van was a GMC, all the replicas were rebadged as GMCs.

The van pictured is one of the six licensed replicas and was based on a second-hand Chevrolet Van, specifically a 1979 model, which was modified to look like a GMC before all the specific A-Team accessories were added. As they were officially licensed by Universal Pictures, all six replicas had to be authentic to what was seen in the TV show, including features like the ‘race coin’ vinyl interior cladding, storage compartments, electronic equipment and all the weapons, including the rear-facing .30-calibre machine gun. For the most part, the running gear was unchanged, though, which in this instance meant a small block Chev V8 with a three-speed automatic transmission.

Described as being driven only occasionally for special events and spending most of the past thirty years on static display, the van on offer presents in very good condition inside and out, suggesting that the majority of the 90,000+ miles on the odometer was accumulated prior to purchase by Hollywood Productions Inc.

A statement from Worldwide Auctioneers says that: “Pop culture always presents highly valued objects. Often, these objects are replicated but rarely can one acquire an authentic, officially licensed piece of history. Icons from the ’80s are just now coming in to their own and the enjoyment and investment potential of this A-Team Van are obvious.”

Worldwide Auctioneers will auction this A-Team replica van at their Scottsdale Auction on 23 January, which due to COVID-19, will actually be held at Worldwide’s headquarters in Auburn, Indiana. Online bidding will be available.

Offered without reserve, proceeds from the sale will benefit the J. Kruse Education Center in the USA that provides career pathway development to students and military veterans.

For more details, go to: worldwideauctioneers.com