In late 1982, Ford Australia announced they were ending production of V8-equipped Falcons and “celebrated” the occasion with a fanfare for the last unit off the line – a 4.9 V8 XE Fairmont Ghia ESP. Now, after almost 40 years in single family ownership, that car has been consigned for auction with Grays.

The background to this car was that, after it rolled off the line on 25 November, 1982, Ford chose not to keep it in their archive or sell it to the public. Instead, it was offered to their Australian dealer network; some say by auction, others say by raffle and others claim it was simply the door prize at a national dealer conference. Either way, Denis McEniery of Denmac Ford in suburban Brisbane was the lucky recipient of the new Fairmont Ghia ESP in Silver Grey over Charcoal and with a 4.9-litre V8 - a car considered a milestone in Ford Australia history.

Being a Fairmont Ghia ESP, this car carried all the elements that defined the ‘European Sports Pack,’ including lower body sections in Charcoal paint, black bumpers and bodyside mouldings with orange (some say yellow) highlights, gold ‘Snowflake’ alloys, a lower ride height, sports suspension using Bilstein shocks, as well as revised spring rates and steering geometry. Inside, Scheel fabric seats in Gunmetal Grey or Sierra Tan (dictated by the exterior colour) were matched with velour-capped door cards in the same material.

Being so well equipped from the factory, the only options on the XE Fairmont Ghia ESP back in ’82 were a premium sound system, towing pack, power windows and power door locks, none of which were fitted to this car.

McEniery never sold the car, despite several offers, or even registered it, instead giving it a prime display space inside the main Denmac Ford dealership in Darra for years. Later, it would be displayed at Bryan Byrt Ford in Mt. Gravatt, but remained with the McEniery family, even following the sale of the Denmac dealership group and Denis’s passing. 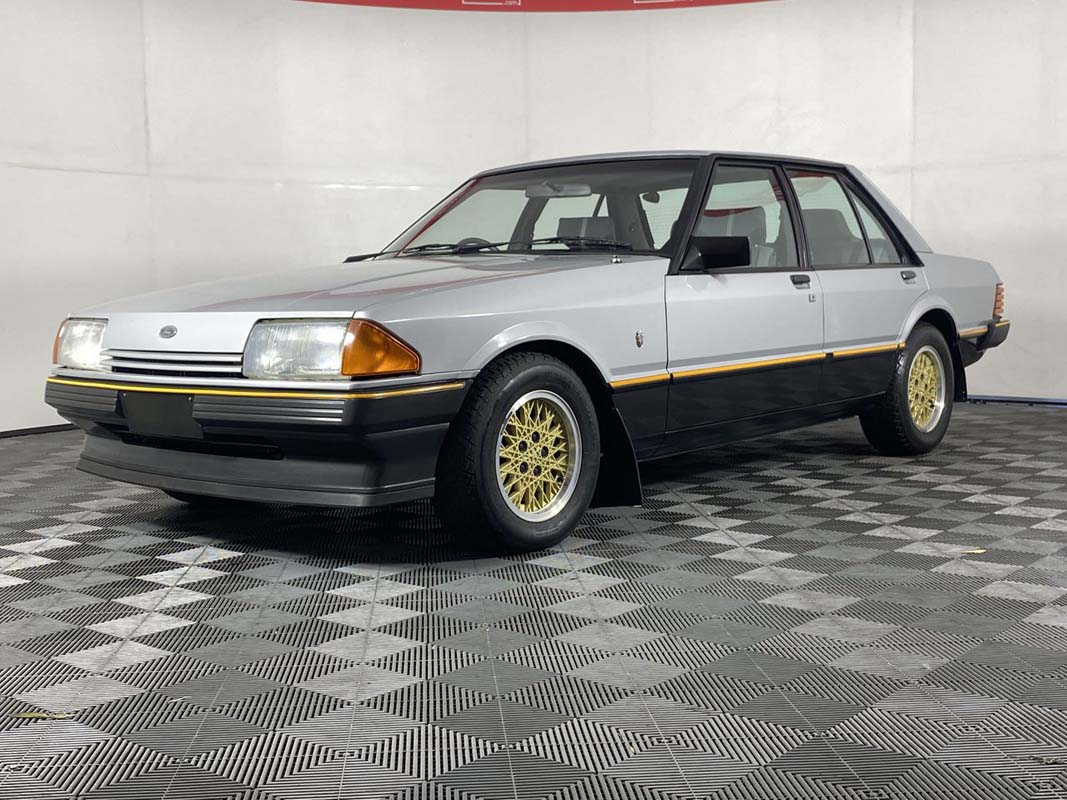 Anecdotal evidence suggests the car has been in storage for most of the past five years, maintained and started regularly, but not driven to preserve the ultra-low mileage, which was just 60km (yes, 60) at time of its consignment with Grays.

Along with its low mileage and “last V8 Falcon” status, the appeal in this car lies in its condition, which is essentially new inside and out. Under the bonnet, time has aged the decals, rubbers and seals, but the engine bay is in remarkable condition for a 39-year-old unrestored car, while outside, the paint looks new and the Uniroyal tyres are the original units fitted on the line at Broadmeadows back in 1982.

On the dash is a special plaque carrying the car’s engine and serial numbers, confirming its ‘last V8’ status and adding “It concludes 50 years of history during which Ford has led the world in V8 engine development for motor vehicles”.

Grays describe this Fairmont Ghia ESP as the best of its type in Australia, and as the car was never registered, they point out that the winning bidder at auction will be its first private owner. Given its condition and history, this car should easily exceed the $50,000 approx. that 4.9 XE ESPs are currently valued at.

Bidding on the ‘last V8’ 1982 Ford XE Fairmont Ghia ESP opened on 14 May and closes on 25 May – see grays.com for bid closure times for individual lots.