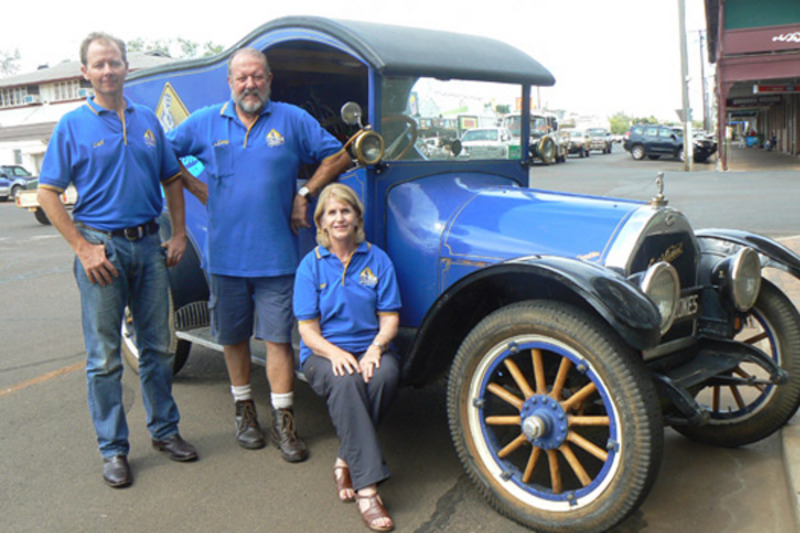 JUST CARS recently spoke to Carl about the Willys, the 'Willys Overland Expedition' and he and Lang's plans for a bigger and better expedition in the future.

For Carl, the expedition had special meaning as he was diagnosed with prostate cancer in 2009, but caught it early enough to be able to do something about it. Seeing fellow sufferers in hospital who weren't so lucky, Carl was determined to do something positive to get blokes thinking about their health and being more proactive in recognising and acting on the warning signs of prostate and other cancers. The challenge, though, was to do it in a way that men would connect with and be interested in.

Being a long-time car and motorcycle restorer and aficionado, Carl figured a tour of the country on a vintage motorcycle would be a good way to spread the word, but having no experience in undertaking such a trek, he sought the advice of fellow Fiat Car Club of Queensland member, Lang Kidby. If you don't know Lang, he's one of the troupe of enthusiasts who did the Peking to Paris recreation in veteran vehicles in 2005, and has completed a number of other long distance vehicle tours and historical recreations since.

"I was originally going to do it on a 1920s motorcycle, like an old Ariel or Matchless," Carl told us. "But Lang said 'You're crazy. Let's do it in a car and I'll come along with you.' Lang phoned me the next day and said he and his wife Beverley had talked through the idea, thought it was fantastic and they suggested the vehicle (the 1915 Willys Overland). That's how we came to be using the 'Overland Expedition' name. Lang and Bev jumped on board with the idea. Their view was they'd done a lot of re-enactments of early explorer's works, but nothing before where the objective was to help people."

The 1915 Willys-Overland was already in Lang's possession, having originally been purchased with the intention of doing the Tasmanian International Veteran Rally in 2010. However, the Overland Expedition seemed like a much more worthwhile event, so he and Carl set to making the vehicle ready for a planned start to the Overland Expedition at the end of Winter in 2010. While the vehicle was mechanically complete, it needed a completely new body and a lot of other work to make it suitable for the planned journey over thousands of kilometres of rural and regional Queensland.

"The fella [that Lang had bought the car from] in Victoria had started a restoration, but gave up 25 or something years ago, because he didn't think he'd get the vehicle running," Carl said.

"So we ended up pulling it down and starting again. We found the cam timing was wrong, so we had to sort that out. He'd sheared a woodruff peg from the crankshaft, so he would have never got the thing running. So, we pulled it apart, and did our best to balance the motor up, which is quite difficult, being a 4-litre, 4-cylinder engine with no counterbalancers on the crankshaft. We went right over the vehicle. Bodywise, the basics of the original bonnet, scuttle and guards were there, but they looked like potato sacks - they were that bad.

"We got photographs from the State Library, to give us reference on what to do. And then set to drawing patterns on the concrete floor of Lang's shed. We basically drew our shapes on the ground, then worked from there, making templates and patterns, then constructing the (C-cab commercial) body, did all the panel work, all the steel work, painted it. We had some correct seats made for the era that were going to be comfortable enough for us to get about in it.

"It was a pretty quick process. As far as restos go, we did in around three months, working on it solidly - we were putting in a good 12 hours a day."

With such a long trip in mind, some concessions to modernity and reliable running were made, as Carl explained.

"We put an alternator on it, because we didn't want to rely on the generator. We put an electric water pump in, because the thermo syphon arrangement is too prone to erratic temperatures. We'd probably end up cracking something if we relied purely on the thermo syphon. Plus we made an adapter manifold. We copied the original, took off the original carby and put on a stronger one for the reliability factor, so we weren't boiling fuel and getting vapour locks. Apart from that, we ran a magneto ignition. The radiator's the original open circuit radiator, so it's not a pressurised cooling system. It's the original 3-speed transaxle. The engine's original. It's pretty well all there, with all the mechanical brakes and the like as they should be."

One might imagine mechanical brakes - on the rear axle only - would have made for some hairy stops, but no so, according to Carl.

"The brakes were a surprise, because we thought 'This is going to be horrendous getting this thing to stop,' but it was fine. She stops really well."

Between the completion of the vehicle in early July 2010 and the start date for the Overland Expedition, Carl and Lang worked on finalising the itinerary and getting the support of relevant government and private organisations.

"We were in touch with the Cancer Council, the Prostate Cancer Foundation, and the State Government. We dealt with the Parliamentary Secretary of Health on that, trying to get them on board, which they all did, and they were all fantastic with their support. There was a lot of background planning going on. I think we shocked Bev with the fact that Lang and I were organised! She normally organises everything!"

Although the November 14 start date for the Overland Expedition was a little later than originally planned, it coincided well with 'Movember' and Carl and Lang found the Expedition linked in with some of the Movember events. With Bev in the backup vehicle, and Lang and Carl sharing the driving duties, the tour started from Wamuran, approximately 50km north of Brisbane, and took in the likes of Goondiwindi, Birdsville, Mt Isa, Charleville, Longreach and other regional areas of Queensland before arriving in Brisbane on December 9. So how did the 95-year-old Willys perform?

Very well, according to Carl.

"It's a marvellous old thing. You look at the engineering, and people go off at American engineering and think 'tractorish', but really it's not. It's an amazing old thing.

"The roads were challenging for the fact they're dirt and rough, and when we did it there was a lot of flooding, so we certainly encountered a lot of water crossings. But the old beast was just astounding.

"We found a really comfortable road speed in it was around 55-60 kph. It was just smooth and luxurious. We weren't out there to break records. We were out there to do something where we needed the vehicle to work. So we weren't about to risk breaking the old girl, which seems to have done the trick. A bit of mechanical sympathy always works!"

A service at Mt Isa, the midway point of the Overland Expedition, was the only serious maintenance the 1915 Willys was treated to for the entire journey. The old Willys also surprised a few people, as Carl explained.

"We pulled up at Normanton for the Movember thing. And there's a guy standing in front of the pub who just started laughing. He said 'You guys must be so sore driving that thing'. And I went 'No, actually it's more comfortable than a modern vehicle.' So the guy got in the car, and I took him for a run around Normanton. When we got back, he got out shaking his head and said 'That's embarrassing. It's smoother than my new Landcruiser.' And (the Willys) doesn't have shock absorbers!"

At all the stops through the journey, the Overland Expedition liaised with local media organisations, charities, support groups and other organisations to spread the word about prostate cancer and men's health, but Lang and Carl also found they didn't need to be 'face to face' to get blokes talking

"The truckies were fantastic. On the back of the Willys, there's the logo 'Give Prostate Cancer the Finger' - the index finger, not the middle finger! You'd hear guys on the road talking to each other (on the CB) in their trucks as they'd pass. They'd start with the vehicle, and then they'd turn to health. That was really good. [Bev] was really surprised with the fact that men would openly discuss it, especially truckies! But they did, which was really, really good for us."

With the first Overland Expedition completed and deemed a resounding success, there are already plans to do a more ambitious Expedition in the future, taking in the entire country with a focus on remote and regional areas, as well as aboriginal communities. The success of using a vintage vehicle the first time around has convinced Lang and Carl to do the next journey in a similar vehicle - and this is where JUST CARS readers can help. For the around-Australia expedition, Lang and Carl are looking for a vehicle that's not only old and quirky, but can also run at a decent road speed.

"If we could do it in a Veteran (pre-1905), that'd be great. Basically, something large and unusual and early. The older and the weirder, the better," Carl said.

"Maybe even an old Plymouth or old Oldsmobile ute or something like that. We really want to get something that's got a bit of road speed, but, yeah, we're open. Anything interesting is worth driving."

If you think you have a vehicle that would suit Carl Neilsen and Lang Kidby's next expedition to raise awareness for prostate cancer and men's health, contact the Overland Expedition team through the http:///willys.com.au website (no www), or call Carl Neilsen directly on 0408 182 679.

For more detailed coverage from the first Overland Expedition, including regular blogs, thoughts from both Carl and Lang, and links to relevant prostate cancer support organisations and other services, go to the Overland Expedition website http:///willys.com.au. To find out more about prostate cancer, contact the Prostate Cancer Foundation of Australia at www.prostate.org.au or phone the NSW headquarters of the foundation on FREECALL 1800 220 099 (NSW) for contact details of your state office. 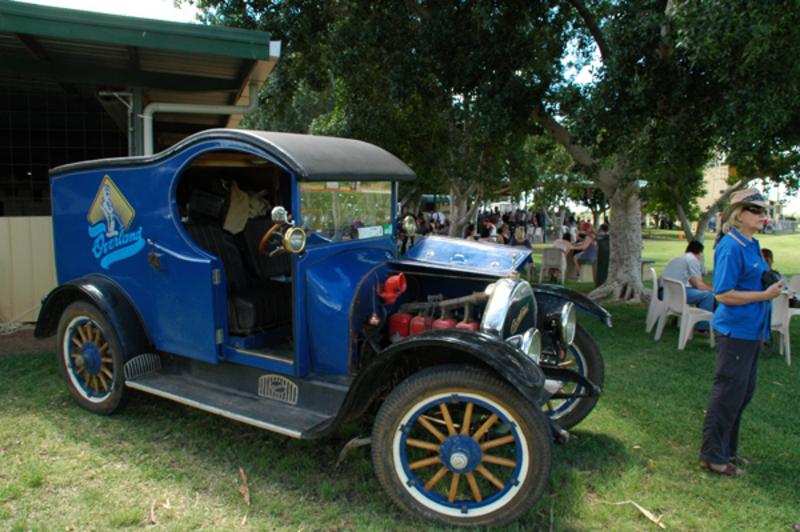 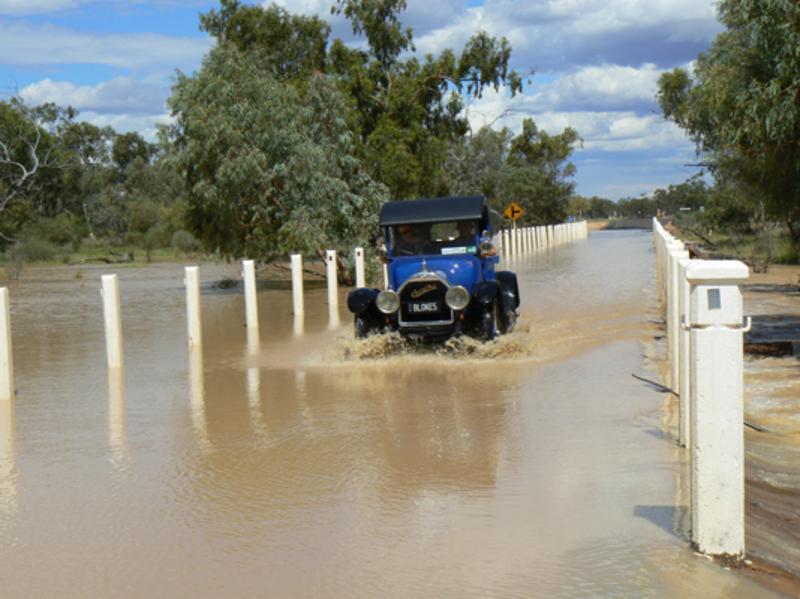 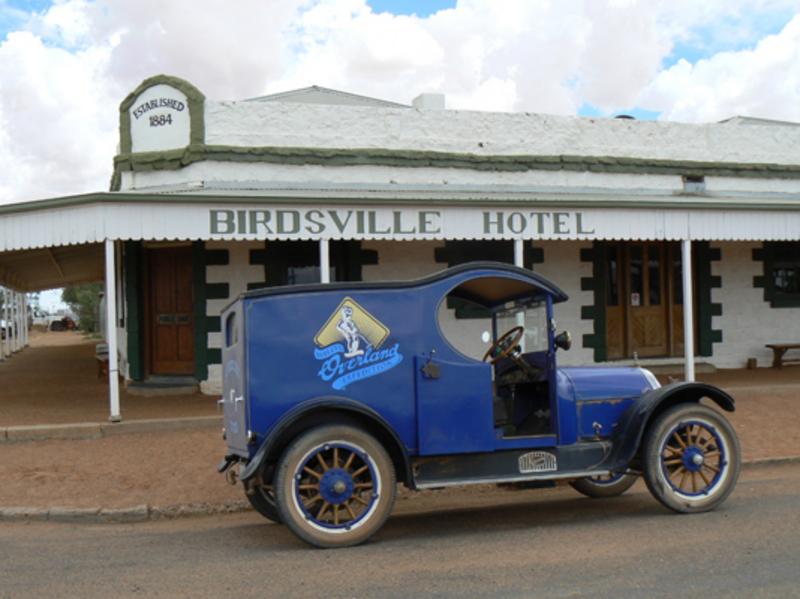 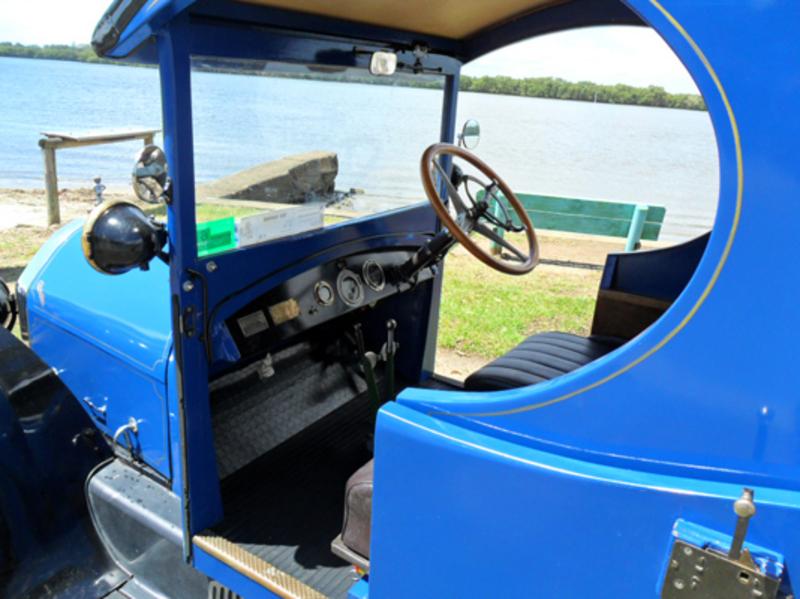 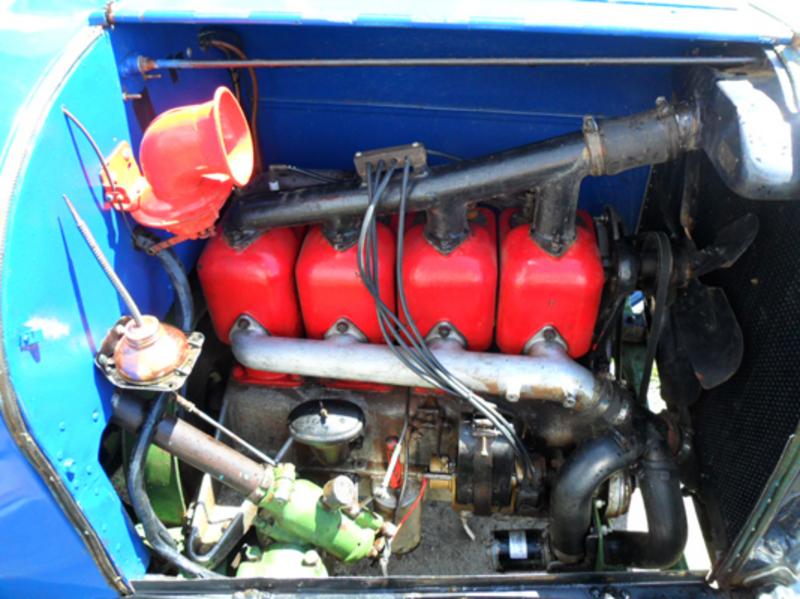 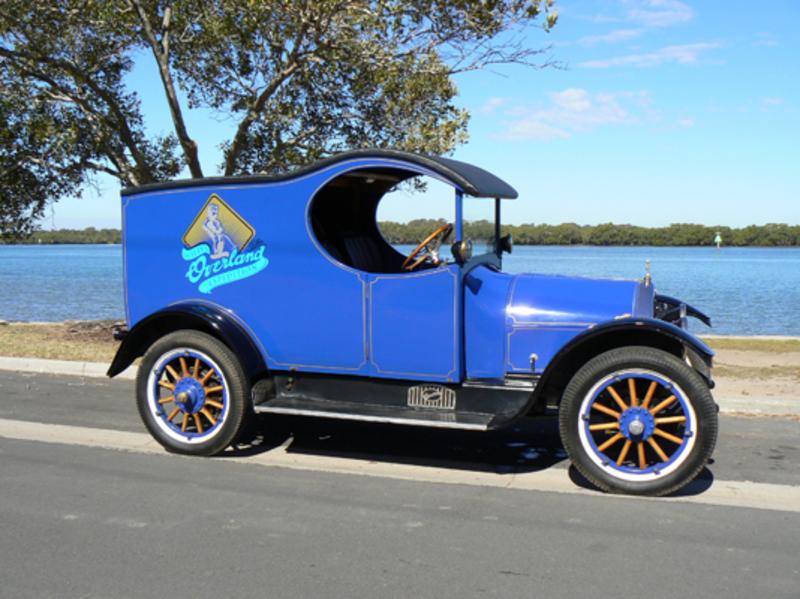 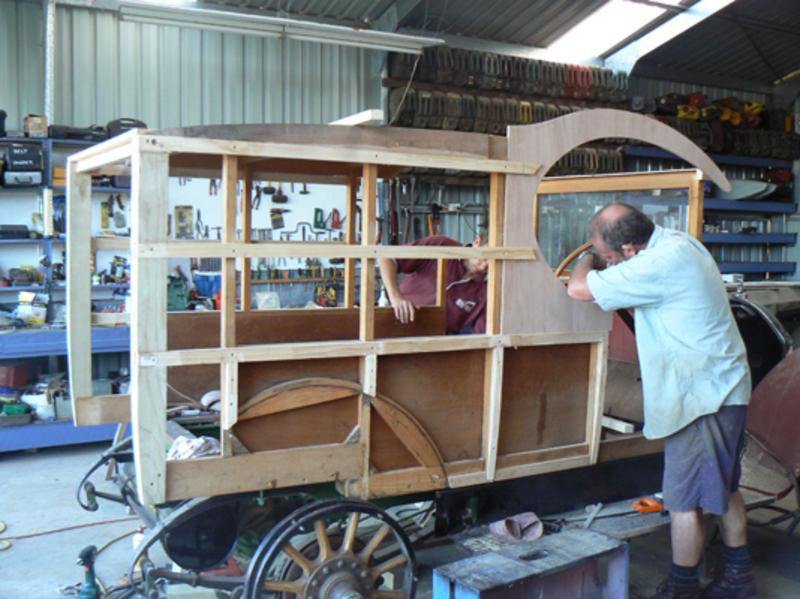