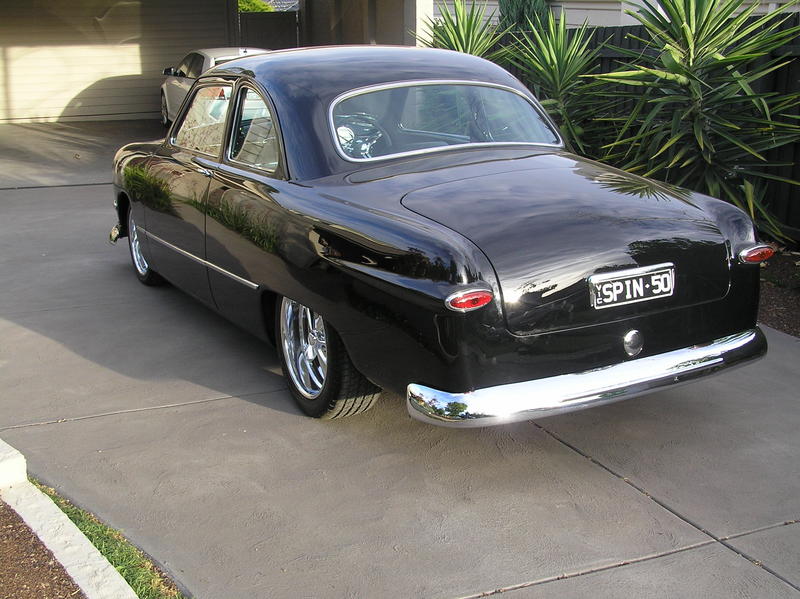 Paul's inspiration came from those great promoters and enthusiasts of hot rods & customs - ZZ Top. "Kopperhed" is one of the lesser-known of the cars commissioned and owned by ZZ Top's Billy Gibbons
While most of us have a "favourite" car, our desires tend to waver from model to model, and sometimes even from make to make. Not Paul Davey, though. He had a single-minded determination to get just one car - a 1949/50 Ford "single spinner". Even more specifically, Paul was interested in only one body style - the 2-door Business Coupe.

Paul's inspiration came from those great promoters and enthusiasts of hot rods & customs - ZZ Top. "Kopperhed" is one of the lesser-known of the cars commissioned and owned by ZZ Top's Billy Gibbons. It's certainly not as well known as the "Eliminator" '33 Ford coupe everyone thinks of when they think of ZZ Top. Compared to some of Gibbons's other cars, like the wild 'CadZZilla', Kopperhed is positively pedestrian, but for Paul, the subdued, near-factory appearance of Kopperhed was part of the appeal. "The car just blew me away and from there I was sucked into the 49-50 model Ford," Paul said. "But I didn't want to do a traditional custom job."

Closer inspection of Kopperhed reveals that, while it looks like a mild custom, there has been a fair bit of cutting and shaping done to turn a five-window '50 Business Coupe into a three-window custom. That said, it wasn't Paul's intention to create a Kopperhead clone. The Gibbons Ford coupe served merely as inspiration, with Paul planning to leave his '50 Ford even closer to factory appearance than Gibbons's car. What Paul did share with Gibbons was that his creation was definitely going to be a driver, so it needed to have modern, reliable running gear.
"The idea was to make subtle changes but still maintain the original look of the car," Paul explained. "It needed all the mod cons and had to be a credible streeter."

Paul's search for the single spinner of his dreams started with a call to Dave Waight at Old Tin in Ballarat, Victoria. "The main thing was to find an unmolested car with the brief (to Dave) that it must be a Business Coupe and still have reasonable sheet metal and a decent chassis," Paul said.
Model A Fords are what Old Tin are famous for, but Waight regularly turns up newer Fords on his overseas buying trips, and in Paul's case, found a suitable donor car in Montana - a 1950 Ford 2-door Business Coupe.

After the Ford was shipped to Australia, Paul entrusted Shane Rowe and the team at Southern Rod & Custom in Deniliquin, NSW, with the job of turning his dream car into reality. A strip down of the body and media blasting revealed what Rowe and his team had to work with.
"Most of the floor was shot the rest was in pretty good order," Paul said, which no doubt caused a sigh of relief!

As mentioned, Paul's brief was to keep the car close to factory appearance, but that didn't mean Southern Rod & Custom didn't have some metal shaping and fabrication to do. The body was left stock height, so no chopping and no sectioning. However, there were changes made from nose to tail. At the front, the guards were smoothed, while the inner guards were replaced and the firewall smoothed to show off the V8 planned for the engine bay. Bumpers were cut and shut to close the body gaps, and the overriders removed. The factory side trim was replaced with custom-made strips of aircraft-grade 7075 aluminium, which was then hand-sanded, polished and chromed.

Towards the back, things get a little more interesting. The rear wheel arches were lifted 2 inches and the fuel filler flap on the top of the nearside rear guard was filled, with the filler itself relocated to a newly fabricated rear rollpan. What isn't immediately apparent is that the boot lid has been shortened by 75mm to accommodate the repositioned fuel filler. It's a neat, subtle touch that works in achieving the cleaner, smoother profile Paul was looking for. As at the front, all the body seams at the rear were welded and filled, and the rear bumper overriders were deleted, too. The floor was beyond salvation, so an all-new floor was fabricated from scratch, which added additional hours to what had already been spent on the body.

With the body done, it was time for Southern Rod & Custom to turn their attention to the running gear.
"The Spinner was given a complete new drivetrain starting with a Ford Racing crate 302 with GT40 alloy heads backed by a Tremec T5 super duty trans," Paul said. The chassis was modified at the front to house the stainless IFS, with a driveshaft loop and additional boxing added to support the diff and trans. Suspension was upgraded to stainless IFS at the front, and four bar at the rear, supported by a set of Air Ride 'Shockwave' air suspension units. Diff is a nine inch, feeding into Moser Super Tuff axles.
"The list goes on," Paul said. "But in the end, the Spinner drives and behaves really well on the road with more than enough horsepower underneath."

Inside, the '50 Spinner presented another challenge for Southern Rod & Custom. Instead of a straight LHD to RHD swap, the requirement for a modern air con unit meant the dash had to be a couple of inches deeper than factory to hide it. You wouldn't know it to look at the finished article, but this proved to be one of the most challenging, time-consuming parts of the project. Added to this was a custom-made centre console finished in the same painted metal as the exterior. Sound comes courtesy of a JL Audio system with 400 watt amp that sits under the dash and is operated remotely. Power window controls add to the mod cons. All round, just the right amount of chrome has been used to trim the gauges and controls.

The front bucket seats don't look out of character with the rest of the mild custom interior, and came from within the Ford family. "A set of '65 Thunderbird seats were sourced and a custom rear seat was made, then covered in black leather by Rybuck Auto Trim in Albury," Paul said. Rybuck also trimmed the door cards, with the armrests made by Southern Rod & Custom. Like the dash work, another time-consuming process involved the refurbishing all the stainless steel window trims. This was entrusted to Francis Paul from Auto Bling in Braeside. Paul did get lucky with the rear windscreen. This was sourced from the US, and turned out to be the first of a new batch produced to suit '49 and '50 Fords.

When it came time to paint, the project took a bit of a deviation. "The original concept was to paint it Aubergine Purple, but I was convinced otherwise, which in the end was a good decision," Paul said, referring to the rich PPG Jet Black the Spinner now wears. Layers of this were laid on by Southern Rod & Custom, then rubbed back and polished to the high level of finish you can see in the photos.

All up, the project took four years from start to finish. Aside from the time taken with certain elements of the build, Paul said it all ran pretty smoothly. The end result, which Paul is justifiably pretty happy with, is certainly one of the most stunning '50 Spinners we've ever seen. Paul extended his thanks to Southern Rod & Custom, Rybuck Auto Trim, Ferntree Gully Platers, Francis Paul from Auto Bling and Stylemaster Designworks for the concepts that were the basis of the build. 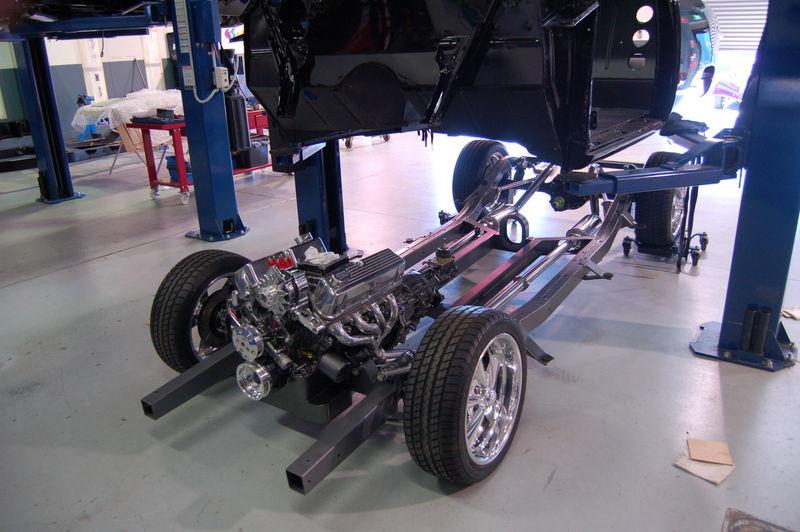 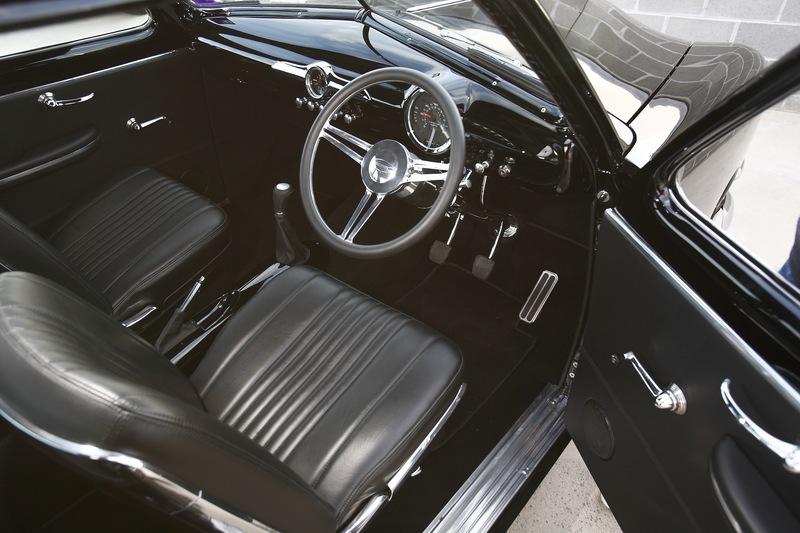 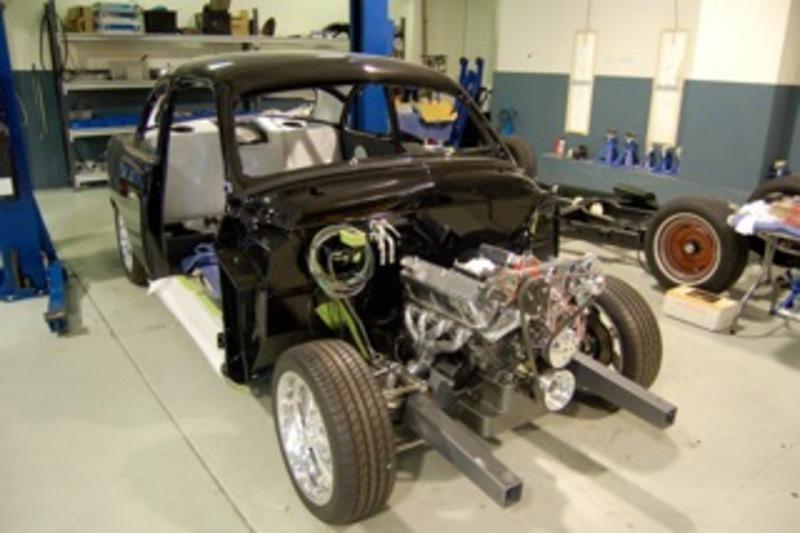 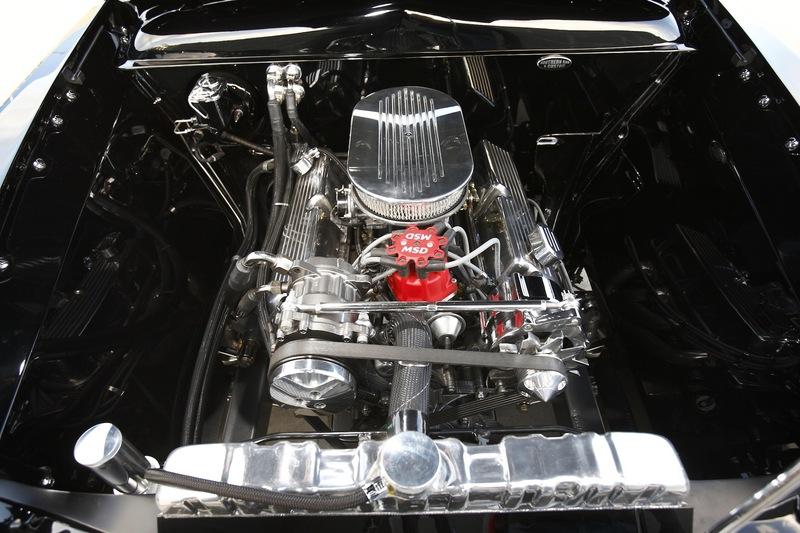