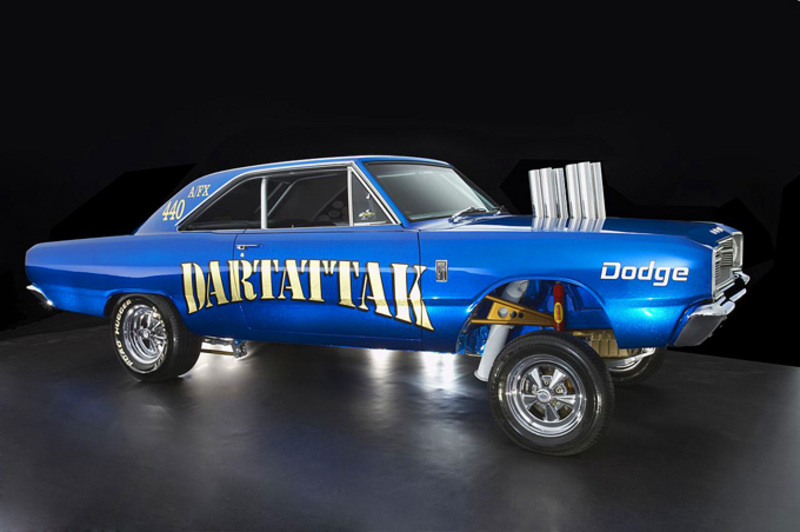 Introduced first as a show car in 1956, and a production car in 1960, the Dart probably did not deserve the success it ultimately gained. It was a relatively low entry compact based on the Plymouth platform, introduced to fill a gap in the Dodge range.

It was initially available in three bodystyles - the Seneca, Pioneer and Phoenix. Multi engine choices were available, including a potent 318ci V8. The lineup that followed included the Demon, Swinger, Sport and the famous Dart GTS.

By 1963 the Dart was the replacement for the Dodge Lancer, which was based and styled on what we affectionately know as the Chrysler Valiant. The Dart GT had a reduced wheelbase and was based on the Chrysler A-body. It was produced in compact form from 1963 through to 1976. During this time it received many enhancements, including rallye suspension, larger wheels and rims, exhaust system, four-speed Hurst floor shift manual or Torqueflite auto. There were 383 and 440ci engines and the 426ci V8 Hemi appeared in 1968.

In 1969 the Dart was modified with the standard GTS 383ci optional engine upgraded. The hardtop Dart Swinger 340 was introduced in 1969, equipped with a 275hp 340ci V8 and four-speed manual gearbox with Hurst shifter. It received full Road Runner/Super Bee treatment and suspension upgrades.

Exterior changes included a redesigned front black grille with a horizontal centre bar. The rear body panel came blacked out, and sidelights were now rectangular in shape. The suspension was rallye with14-inch wheels, and bumble-bee stripes had GT written on them! Around 20,000 of the Swinger 400 were produced in 1969, with just over 6,700 being GT versions.

The 1969 Dart was the fourth generation of the compact Dodge and was offered in 4 and 2-door sedan, convertible and hardtop, with two Slant 6 engines and no less than 5 V8 variants ranging from 4.5 to 7.2-litres, matched to 3- and 4-speed manual or 3-speed Torqueflite auto transmission.

The 1969 Dart introduced the 'Swinger', an additional model pitched at the youth market. It was a low priced, two-door hardtop with standard 340ci V8, four-speed manual transmission, dual exhaust rallye suspension and a special bright red colour scheme, and of course the bumble bee stripe.

In Australia the Dodge Dart was marketed as the Valiant, VIPs and Regals. Perhaps our most loved version was the performance Pacer version, initially designated as the 1969 VF Valiant. The more delightful 2-door Pacer followed in 1970 as the VG. The Pacer was essentially a RHD 1969 Dodge Dart, with minor local modification.

The top of the range Dodge Dart Phoenix was imported into Australia in the 1960s as a complete knock down kit, and assembled locally using a range of locally sourced components. Although based on the Dart it was only offered with a 318ci V8 as a four-door sedan. By the late 1960s the Phoenix was based on the Dodge Plymouth Fury, but was soon phased out in favour of Chrysler's long wheel version of the Valiant. According to Shannons, between 293 and 400 four door pillarless Dodge Phoenix sedans were built in Australia in 1969. The Phoenix (Dart) makes a great cruiser with reliable V8 performance.