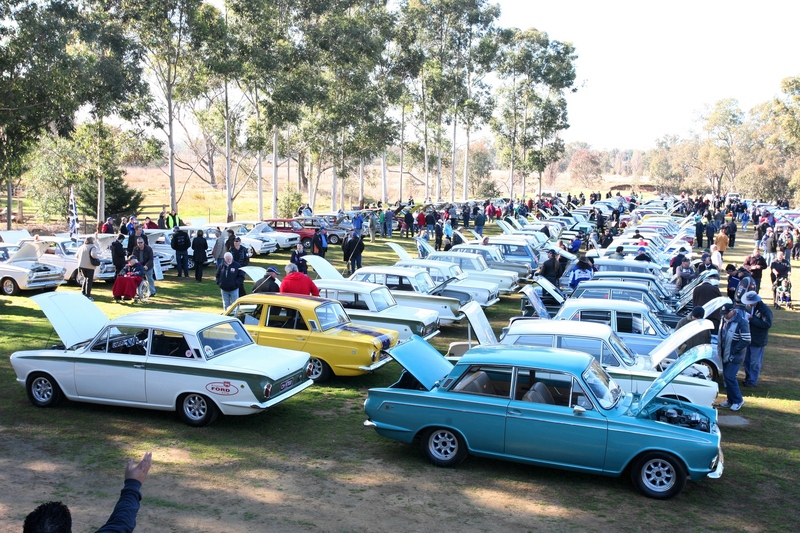 The 1st Cortina Nationals attracted entrants from all States in Australia, with an impressive 250 Cortinas present for the main display day on Sunday, June 10
The Queen's Birthday long weekend marked the first ever Cortina-only event to be held in Australia. In celebration of the Cortina's 50th Anniversary in 2012, the Cortina Mk1 Owners Club hosted the '1st Cortina Nationals' at Albury, NSW and surrounding districts.

The 1st Cortina Nationals attracted entrants from all States in Australia, with an impressive 250 Cortinas present for the main display day on Sunday, June 10. A contingent of New Zealand Cortina enthusiasts also made their way across the Tasman for the event.The NZ Cortina Club will be hosting their own event in October.

The Kinross Woolshed Hotel in Thurgoona was the venue for the Sunday display, with the expansive grounds around the hotel virtually full of Mark I, II and T-Series Cortinas. Road cars, daily drivers and some immaculate show cars and customs were on display, with the MkI and MkII models making up the bulk of the numbers. The performance MkI and MkII Lotus Cortinas were well represented, along with other race cars.
Speaking of performance, special guest at the 1st Cortina Nationals was motorsport legend Harry Firth, the man who partnered Bob Jane in a MkI Cortina GT to win the Armstrong 500 at Bathurst in 1963, the first of three Bathurst wins for the Ford Cortina in the 1960s.

One of the highlights of the display day was the appearance of one of the four 'fastback' Cortinas built by Bodycraft in the 1960s. Another rarity was a Cortina utility, which was factory-built in South Africa on the MkIV model. A couple of Crayford convertible conversions drew a lot of attention, as did the highly sought-after GT 500 modells and a very individual 'rat look' Cortina custom from WA, complete with "RATTINA" badge!

The event kicked off on Friday, June 8, with the assembled Cortina-holics setting up at Albury's Lake Hume Resort. On Saturday, a barbeque breakfast at Blacklock's Ford in Lavington (NSW) was followed by a run to Beechworth (via Mt. Beauty and Bright), where the run participants stopped for lunch and put their Cortinas on display. Upon return to Lake Hume, a car boot sale saw all manner of Cortina goodies change hands, with Saturday evening concluding with a special dinner at the resort, where Harry Firth was the guest speaker.

Sunday was devoted to the public show 'n' shine display, and following early morning fog, the organisers were blessed with perfect sunshine for the event. At the conclusion of Sunday's main public display, the 'raffle' 1967 MkI Cortina was won by a NSW enthusiast, who was almost speechless when it came to receiving the keys to his well-presented vehicle! The event wrapped up with dinner at the Kinross Woolshed Hotel.

Full credit must go to the Cortina Mk1 Owners Club, who put on a fantastic event that was especially praiseworthy considering it's the first time they've hosted anything of this size before. Punters at the show 'n' shine day were already talking about the next Nationals, and given the success of this event, the Cortina Nationals is likely to become a biannual event.