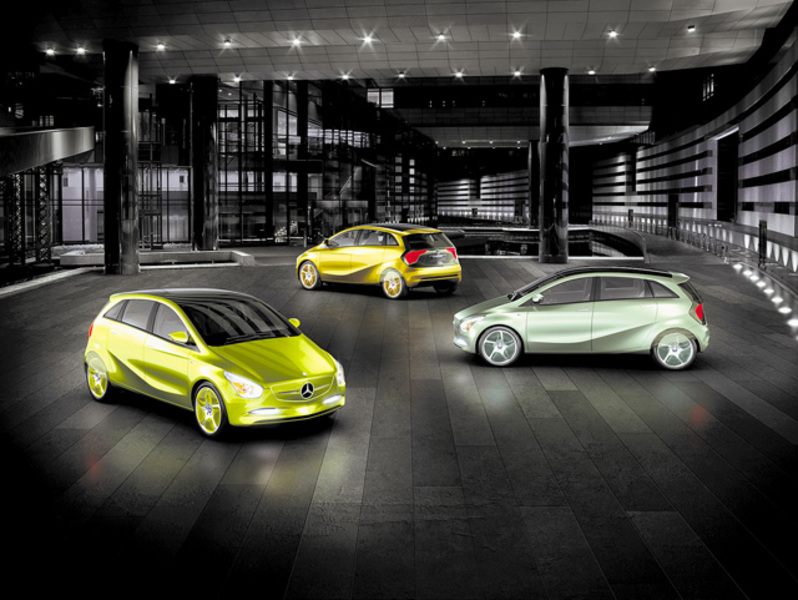 In years gone by we have witnessed a frenzy of heavy metal, muscle machines and many outlandish concepts. 2009 and things changed, quite alot in fact. Gone were the extremes of spectacular launches, gone were (most) of the biggst and fuel hungry offerings, to be replaced by an austere show that reflected the current economic environment.

Chrysler and General Motors were on the ropes for most of 2008 and are only on life support, thanks to the billion dollar financial bailout from the US Government. The motor monguls had argued their respective cases in Washington and finally were given the cash lifeline they so badly needed.

The Detroit show was very much about payback. These - and other car makers - showed new, power efficient, altenative energy vehicles that are fuel efficient and deliver what (everyone thinks) are the cars of the future.

GM started the ball rolling, with 17 new models, many of which incorporated fuel efficient and hybrid and electric technology.

Rick Wagoner GM Chairman and CEO set the direction for the show announcing the production version of the Chevy Volt, and ended with the Cadillac Converj concept... "two vehicles that symbolise a new General Motors... and the kind of technology and innovation which we are committed to help address society's energy and environmental challenges".

The Volt, which was displayed last year at the Sydney Motor Show is powered by GM's exclusive Voltec electric propulsion system. When running off its battery, the Volt operates as a traditional battery-electric vehicle, with a driving range of up to 40 miles... which is more than the average daily commute for three-quarters of Americans.When the driver of a Volt needs to go beyond 40 miles, a small engine generator kicks in to generate enough electricity to keep the car going for hundreds of additional miles.

Wagoner said. "the key to getting the Chevy Volt, our plug-in Saturn VUE, a concept like the Converj, and other electrically-driven vehicles into the hands of consumers is an advanced lithium-ion battery technology".

Wagoner announced that after much testing and developing, GM now had an advanced battery that will power the Volt from 2010. Wagoner also signalled that GM was getting back into the battery business and the new battery would be manufactured in the USA.

"This is a further demonstration of our commitment to the electrification of the automobile and to the Chevy Volt ... a commitment which now totals more than one billion dollars," he said.

The Cadillac Converj concept propels Cadillacs into the future of luxury driving. The concept is a well appointed grand touring coupe with a bold design, a host of interactive technologies and eco-friendly, renewable materials throughout. The four-passenger Converj concept is intended to show how GM's revolutionary Voltec electric propulsion system can meet the desires of luxury consumers.

"In many ways, today marks a new beginning for General Motors, as we dramatically accelerate and expand the restructuring that we've been driving in North America, and around the globe, for the past several years," said GM Chairman and CEO Rick Wagoner.

Cadillac revealed the first ever North American wagon. It is a progressive take on the classic wagon body style that delivers significant functionality and fuel efficiency, including up to an estimated 28 mpg highway. Intended to connect with the changing priorities of luxury consumers, CTS Sport Wagon production begins in the spring. The CTS Sport Wagon, like its sedan predecessor (which also is part of the rally), includes available features such as all-wheel drive, a 40-gigabyte internal hard drive and pop-up navigation screen. With the Cadillac CTS about to be launched in Australia, it will be interesting to see if the wagon model is also offered, as it would compete against the Holden Sport Wagon.

One of the problems with electric cars is that they tend to look dry and boring, and the sort of car you would buy for your mother.

The Dodge Circuit EV's profile demonstrates perfect proportions for balanced handling, placing the driver and passenger midway along the wheelbase. At the front of the vehicle, the distinctive Dodge crosshair grille splits the wind, sending it over the long, low hood and cleanly over the windshield and cockpit. The body sides feature a deep scallop, providing visual depth and also a functional rear brake air duct. At the rear, the functional elements blend with design to create a uniform finish.

The uncomplicated interior of the Dodge Circuit EV delivers a combination of function and athletic refinement. The cockpit design puts complete control of the car at the driver's fingertips.

The seats feature deep bolsters and are covered in premium leather. The Dodge Circuit EV delivers all of the convenience features of a performance sports car, including premium sound system, power windows and door locks and air conditioning.

The Circuit EV goes from 0-100 km/h in less than 5 seconds and on to a top speed in excess of 200km/h. Perhaps the most impressive Dodge Circuit EV number, however, is zero. That's how much petrol the vehicle consumes while providing exhilarating sports car performance. It's also how much tailpipe emissions are produced.

The Dodge Circuit EV utilises just three powertrain components. These include a 200kW electric motor to drive the wheels, an advanced lithium-ion battery system to power the electric drive motor, and a controller that manages energy flow.

Working with the latest advanced lithium-ion battery technology, the Dodge Circuit EV has a driving range of 150 to 200 miles between charges. Recharging the vehicle is a simple one step process: plugging into a standard household power socket.

The 200C could easily become another cult car that could boost Chrysler sales. The concept vehicle combines the benefits of ‘Range extended Electric Vehicle technology' -which sees an elecric motor backed up by a petrol engine. Capable of driving up to 40 miles on battery only power - using zero petrol and producing zero tailpipe emissions - the 200C EV uses a small petrol engine and integrated electric generator that produces electricity to extend the driving range to 400 miles. Based on a shortened version of Chrysler's successful rear wheel-drive platform, the Chrysler 200C EV is a performance sedan in a package that looks great.

Based on a single vehicle's architecture, this intelligent, modular concept allows three models with different drive configurations, all of which are able to meet customer requirements in terms of sustainable mobility. The three models are:

• The BlueZero E-CELL PLUS with electric drive and additional internal combustion engine as power
generator (range extender). This version has an overall range of up to 600kms and can cover a
distance of up to 100kms using electric drive alone.

The three BlueZero variants are based on the unique sandwich floor architecture which Mercedes-Benz introduced some ten years ago, initially for the A-Class and then for the B-Class, one of the aims being to integrate alternative drive systems.

Advantages of the modified construction include the positive effect of the major drive components on the car's centre of gravity, their space saving design, and the fact that they are extremely well protected within the vehicle's under body.

These include state of the art liquid cooled lithium-ion batteries with a storage capacity of up to 35 kWh and the compact electric motor with a maximum output of 100 kW (continuous output 70 kW), which develops a peak torque of 320 Nm. All three variants accelerate from 0 to 100 km/h in less than 11 seconds. Their top speed is electronically limited to 150 km/h in the interests of optimal range and energy efficiency. With a charging capacity of 15 kW, the powerful lithium-ion batteries in the BlueZero E-CELL and the BlueZero E-CELL PLUS can store enough energy for a range of 50kms within 30 minutes.

In terms of purely electrical drive, one or two hours of charging time is needed for a range of 100 and 200kms respectively. The charging times are doubled if the charging capacity is 7 kW, as would be the case in a normal household. Both of these Blue-Zero vehicles incorporate an electronic control unit that supports intelligent charging stations and billing systems.

At the rear, the BlueZero E-CELL PLUS has the same 1.0-litre turbo charged petrol engine as the smart fortwo as an additional range extender. This compact three-cylinder powerplant has an output of 50 kW at a constant 3500 rpm. If required, it can recharge the 17.5-kWh lithium-ion battery by means of a similarly rated alternator. A range of up to 600 kilometres is possible on a single tank. The purely electrical range is up to 100kms. 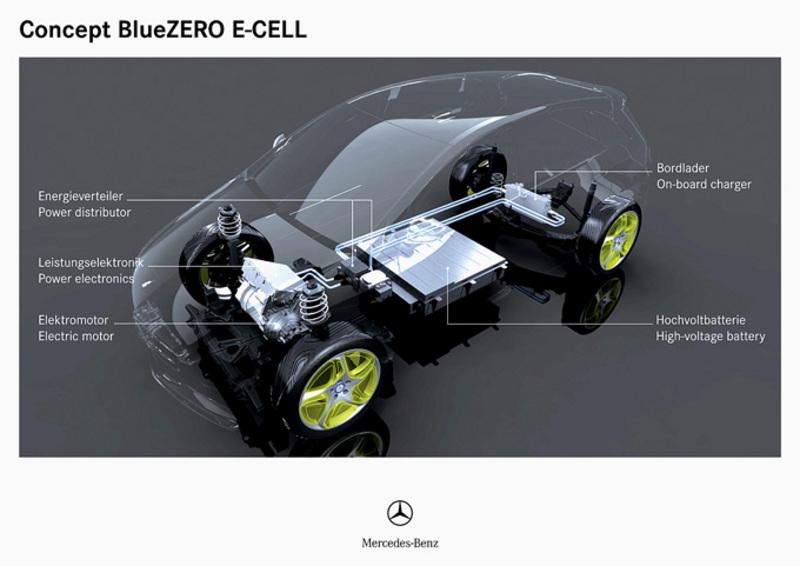 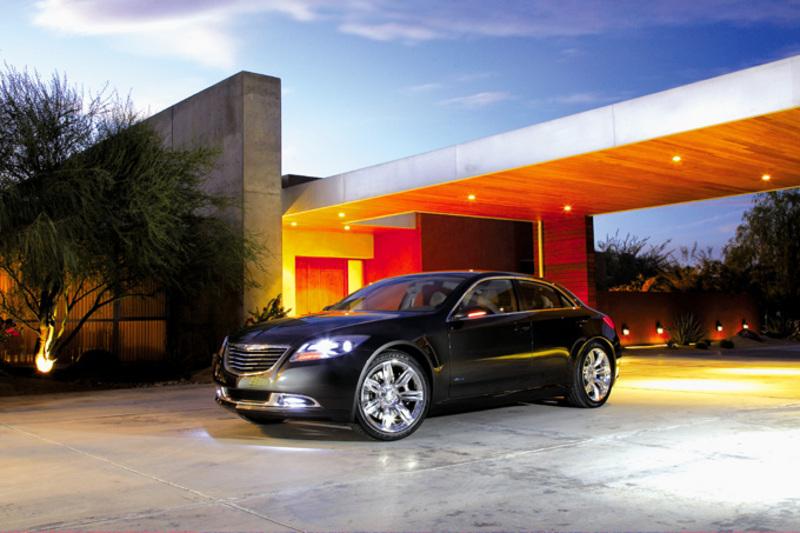