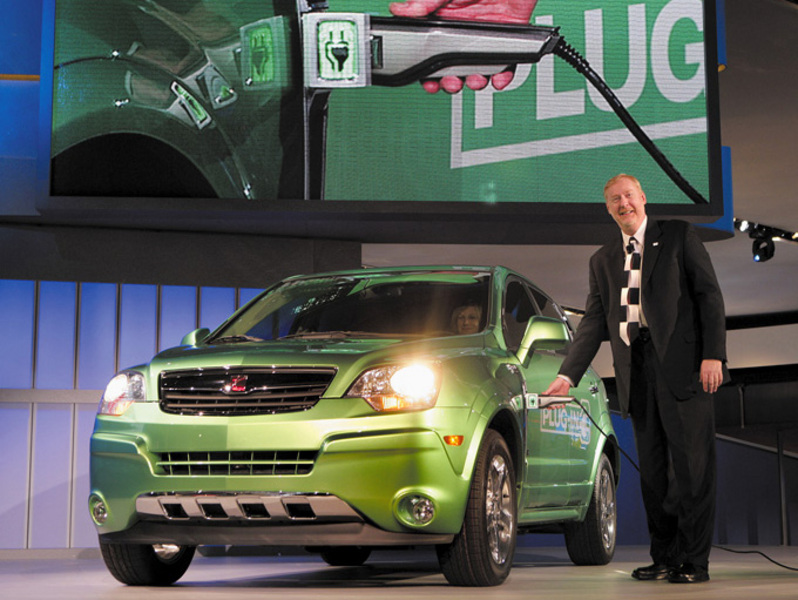 The first front-wheel drive compact SUV in the world powered by General Motors' two-mode hybrid technology, is designed for customers who want the outstanding fuel savings of an advanced hybrid and the full power and towing capability of an SUV.

The Vue Green Line 2 Mode will deliver an estimated 50 percent fuel economy increase over the non hybrid V-6 Vue. It also is expected to have a driving range of more than 800 km. In addition, the Vue Green Line 2 Mode's 3.6L VVT V-6 engine with direct injection technology ensures there are no trade-offs between performance and fuel economy. Acceleration time from 0-60 is expected to be around 7.3 seconds, and the maximum towing load will be 1588 kg. The Vue Green Line 2 Mode features technologies and refinements in the fuel and exhaust systems that classify it as a Partial Zero Emissions Vehicle (PZEV) in the state of California and other states that have adopted California's motor vehicle emissions rules.

_ Engine off at idle
_ Low-speed, electric only propulsion
_ Cutting off fuel to the engine during vehicle deceleration
_ Regenerative braking
_Energy efficient accessory systems

Unlike single mode hybrid technology found in competitors' SUVs, the two mode system maximises city and highway fuel economy by integrating two electric continuously variable modes with four fixed mechanical gear ratios. The system consists of twin, active cooled 55kW electric motors integrated into the 2MT70 automatic transmission. Energy to power the motors comes from a 1.8 kWh, 300V nickel-metal hydride battery pack, which consists of 22 nickel metal hydride modules and is packaged behind the second row seat below the cargo floor. The transmission is mated to GM's 3.6L V-6 VVT with direct injection technology. In the first mode, at low speed and light load, the Vue Green Line 2 Mode operates in one of three ways depending on conditions and battery charge level, all electric power, internal combustion engine power or a combination of the two. All reverse operation is driven by the electric motors.

The second mode is used primarily at highway speeds to optimise fuel economy. It provides electric assist in addition to six-cylinder power when conditions demand it, such as trailer towing and climbing steep grades, and to allow the engine to run at its most efficient point under less demanding conditions. No engine speed changes are necessary for the mode shift to occur. The result is exceptionally smooth, seamless acceleration and responsiveness. At all times, the system's Hybrid Optimising System (HOS) collects torque based data, deciphers it, then determines the most fuel efficient means of propelling the Vue Green Line 2 Mode. In the center console, a colour VGA power flow graphic, which is integrated into an available navigation system, continuously informs the driver and passenger whether the vehicle is sending power to the wheels from the battery pack, engine or both.