Starting and finishing in Argentina, and taking in Bolivia and a return to Chile, Dakar 2015 will consist of 13 stages over 14 days, visiting 12 South American cities from January 4 - 17.

A.S.O. devoted their week to a first preparatory tour of South America, with the main aim of announcing the host cities on the programme for the 2015 edition. A meeting with the Argentinean press was held at the Palacio San Martin in Buenos Aires. They were able to meet around thirty riders and drivers from the country, including the flag-bearer Orlando Terranova, 5th on the last two editions of the Dakar in the car category.

The competitors discovered that they will be returning to Rosario, which hosted the start of the Dakar in 2014, immediately before they reach Buenos Aires for the rally's finish, where they will be acclaimed by the public during a podium ceremony organised in front of the presidential palace, the Casa Rosada.

Next January, the Dakar will also return to Chile, where the presentation conference was cancelled due to an earthquake that affected the region of Iquique.

The Chilean part of the route, which should normally include the cities of Copiapo, Antofagasta, Iquique and Calama, is therefore subject to confirmation, as explained by Etienne Lavigne on conclusion of a meeting with the Chilean authorities: "Naturally, we are adapting to the difficulties that the Chileans are going through at present. They have many problems to deal with and they will then need to assess the precise impact these earthquakes have had before confirming that our project can go ahead".

At first glance, the Dakar should be able to proceed, and so will the "Iquique festival" that has been planned, since the bivouac will normally be set up the for three days, including two devoted to rest days, in alternation depending on the category.

In such a format, Iquique will be directly linked to Bolivia and Uyuni, which will this time welcome the quads and bikes, before the cars and the trucks. During the press conference organised on March 4 in La Paz, President Evo Morales expressed his delight at the extension of the Dakar's stay in Bolivia, the rally having already met with country-wide enthusiasm on its first visit.

*Pending confirmation by the Chilean authorities.

Further details and updates at www.dakar.com 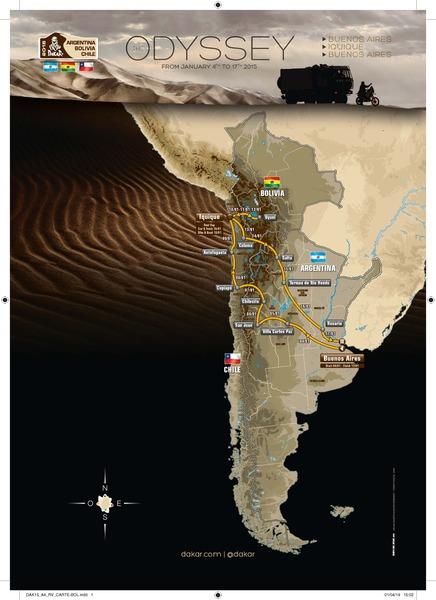