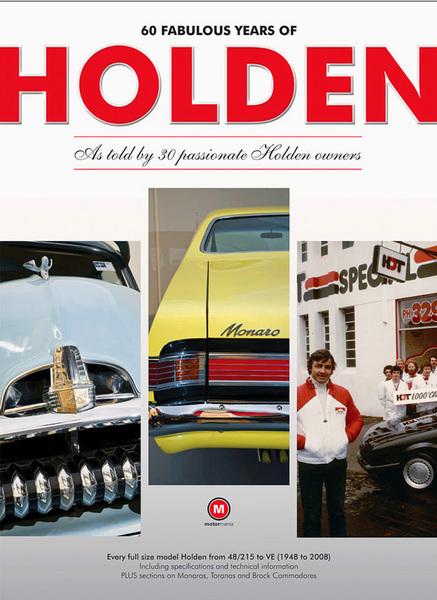 However, as the title suggests, 60 FABULOUS YEARS OF HOLDEN - as told by 30 passionate Holden owners takes a slightly different tack by letting the owners of some classic and not-so-classic GMH products tell the story of their Holden and why they love it. Starting with Phil Munday's rare and valuable 48/215 sedan (the 19th built), 60 FABULOUS YEARS OF HOLDEN runs the gamut of all Holden sedans, up to and including the VE Commodore, most of which are professionally photographed in studio conditions. A selection of Toranas, Monaros, Brock Commodores and HSVs are also included. There are also sub sections on the Brougham and Statesman, Holden motor racing, concept cars and a comprehensive year-by-year summary of GM & Holden's entire history from 1854. While most of the Holdens featured are kept in fastidiously clean condition by their owners, there are a few daily drivers in there, too. Some are mildly customised, while others are wild, mural-covered street machines. Where this book really shines though, is in its size and layout. The large format - 33cm x 24cm - allows the images to be run at an impressive size.

This is particularly welcome with shots of the GMH concept cars and the historical photos from the Holden archives. For example, a shot of the Fishermen's Bend factory from 1940 spreads over two pages, allowing the reader to pore over the detail of both the Art Deco facade of Holden HQ, as well as the lineup of Chevs parked out the front! The larger reproduction of old adverts and sales brochures is a welcome addition, too. The layout is open and colourful, while information boxes on each model carry all the vital data like production numbers, release dates, engine options and so on. The book is printed on good quality stock, too - a factor that seems to be neglected with a lot of books these days. The one thing that lets 60 FABULOUS YEARS OF HOLDEN down is some sloppy grammar and spelling mistakes that could have been remedied. All things considered, though, this is still an impressive volume on the history of Holden, and would be a worthy addition to the bookshelf of just about any Holden fan. It's published and printed in Australia, too.